A fairly active week for me in my hobby of philately capped off by purchasing the year’s second Thailand stamp issue and some successful bids on eBay (where I’ve been looking at some classic U.S. stamps trying to fill gaps in my 1893 Columbians and 1869 pictorials sets as well as much more recent first day covers).  I received a few purchases made in December and am continuing to seek out news of upcoming releases for 2019. Canada recently revealed its first designs of the year, the first of which were issued on January 14, and Great Britain releases its Stamp Classics sheet today. I’ve also begun creating what I am calling my “Virtual Album”, placing scanned images upon digital pages. All of this amidst daily additions to the A Stamp A Day blog (and my day-job of teaching) has made for a very busy week indeed.

It wasn’t until last night that I had a chance to read a few philatelic news sites, learning that the National Postal Museum in Washington, D.C. is yet another victim (as are all of the other Smithsonian Institution facilities) of the current U.S. government shutdown that began on December 22. The postal museum closed on January 2 and suspended all on-site programming and events. The Smithsonian Institution is about two-thirds federally funded, with the rest of the funding coming from other areas; including donations, endowments and revenues from product development and sales, concessions and other sources. The Smithsonian Institution reports that its federal appropriation for the 2018 fiscal year was $1 billion.

END_OF_DOCUMENT_TOKEN_TO_BE_REPLACED

This October, I have been celebrating (U.S.) National Stamp Collecting Month with near-daily articles about different aspects of the hobby and mail delivery on my A Stamp A Day blog. Today’s article about the Smithsonian’s National Postal Museum in Washington, D.C. was my last on the subject, my 23rd in a month of 31 days. Tomorrow’s post will be Halloween-themed. After that, I will be taking a two-month break from lengthy ASAD articles. I will still post an image of a stamp from my collection each day during that time, but the descriptions will be extremely bare-boned (probably just the stamp’s caption and a line or two about the subject portrayed). There are several reasons for this, and I will explain them in my article on that blog on November 1.

In the meantime, I’d like to share the photos NOT used in today’s National Postal Museum article. This is a place I haven’t yet visited but I will definitely remedy that on my next trip to the United States. These photos help to remind me why I want to go. It might take me a few more years, but I will get there eventually…. 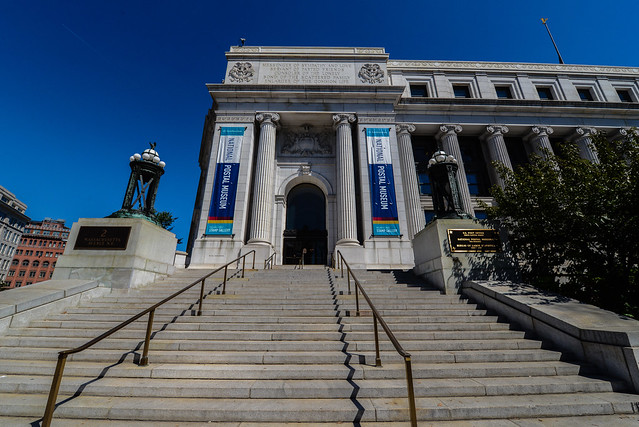