END_OF_DOCUMENT_TOKEN_TO_BE_REPLACED

Sometimes I wonder what Thailand Post is thinking of when the stamp selection committee meets to choose topics for future issues. Tue, most subjects on Thai stamps are quite worthy and beautifully executed; we aren’t bombarded with the tons of frivolous wallpaper that some postal administrations churn out with regularity. There have been relatively few poor designs in the years since I moved to southern Thailand and began to avidly collect the Kingdom’s issues, past and present.

However, I feel that there have been missed opportunities along the way and that Thailand Post has repeated itself far too often in recent years. There are certain issues that are guaranteed each year: (Western) New Year’s Day, Children’s Day, Chinese New Year (which they actually passed over in 2018!), a Thai traditional festivals set coinciding with Thai New Year, at least one of the Buddhist holidays (Vesak Bucha being this year’s honoree), Thai Heritage Conservation Day, the King’s Birthday, Mother’s Day, World Post Day, and the multi-stamp flowers issue for the following New Year (annually released in November, they take the place of the Christmas stamps released by Christian nations).

There are also various joint-issues mixed in throughout most years. I quite like these but it is in this area that Thailand Post tends to make mistakes. For example, last week a nice pair of stamps was released to mark the 60th anniversary of Thailand’s diplomatic relations with Turkey with a stamp each portraying the nations’ national sports. A beautiful set and a worthwhile commemoration until you realize that the 50th anniversary of Thai-Turkish diplomatic relations was marked by a joint-issue a mere ten years ago. Is the nation going to mark the 70th anniversary as well? It’s not as if we are being overrun with Turkish tourists (I’ve only met one Turk in the 14 years I’ve lived here).

Thailand does seem to like oddly-numbered anniversaries as well. While many nations such as the United States or Great Britain will deem 50th, 100th, and 200th anniversaries of events as stamp-worthy, Thailand Post has issued stamps in the past few years marking the diplomatic relations between the Kingdom and Russia (120 years), China (40 years), Sri Lanka (60 years), Israel (60 years), and even the Democratic People’s Republic of Korea — that’s North Korea to you and me — (40 years). Of course, the granddaddy of all of these was the joint issue with Portugal which marked 500 years of friendship (which predates both the Chakri Dynasty and the Ayutthaya Kingdom).

Yet, Thailand has never philatelically honored the United States of America — it’s longest-held diplomatic trading partner if you measure the birth of the nation as the beginning of the ongoing Rattanakosin Kingdom (อาณาจักรรัตนโกสินทร์,) which was founded in 1782. Perhaps the bosses at Thailand Post have forgotten that nearly every paved road and airport in the vast northeast region known as Isaan was not only designed but also constructed by U.S. Army manpower. The two countries have fought shoulder-to-shoulder in every major conflict since World War II, and even redefined their partnership to meet modern global challenges like terrorism and transnational crime. 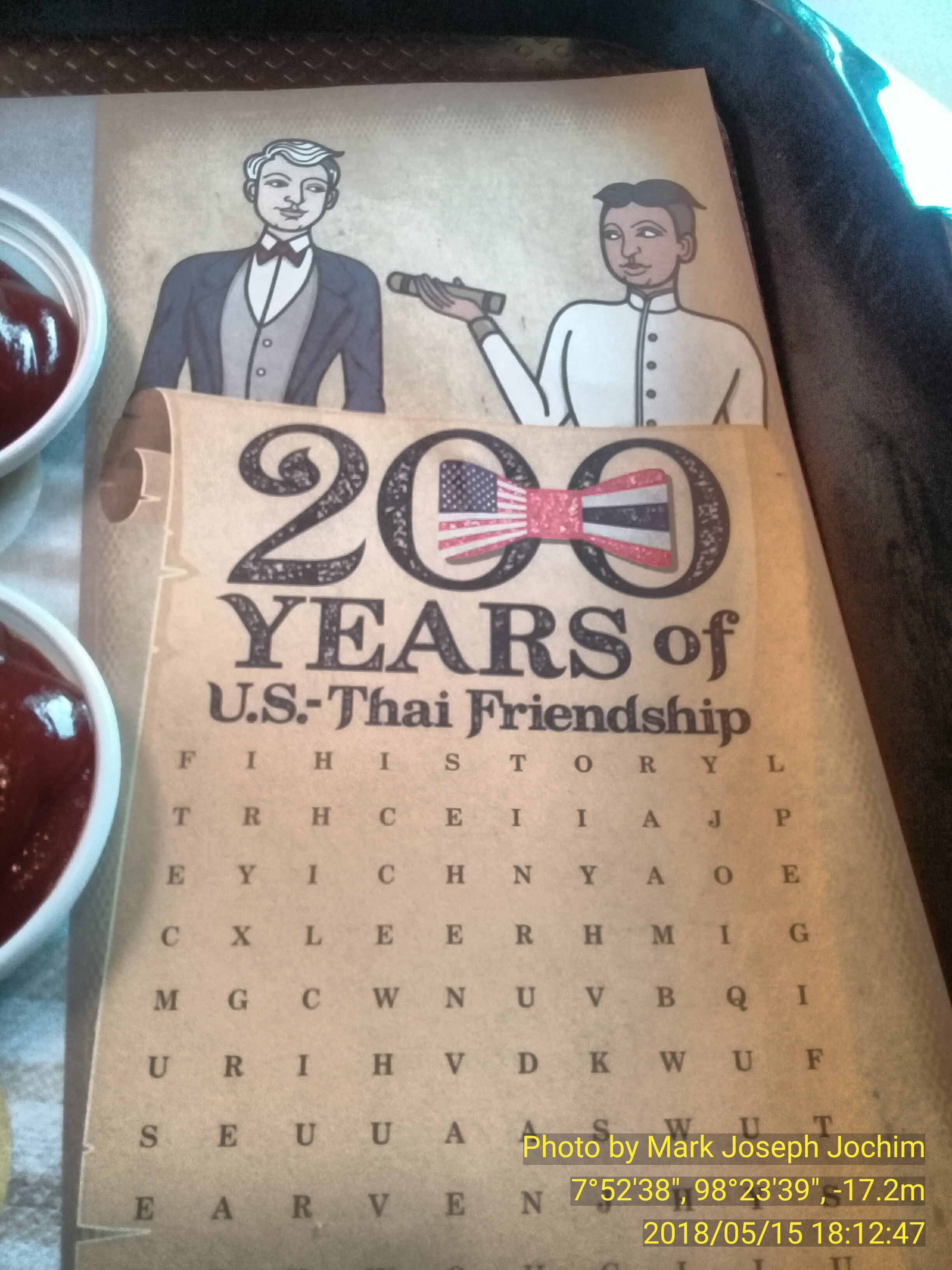 I was reminded the other day that 2018 is the 200th year of friendship between Thailand and the U.S. This reminded didn’t arrive via a U.S. Embassy Resident Alert or mention on the media, or, as I would hope, by the announcement of a pending stamp issue. No, I made a rare visit to the local McDonald’s (sometimes you just NEED a Big Mac) and, as I finished my fries and moved the carton in order to attack the burger the message loomed large as life on the tray-liner!

Come on, Thailand Post! If a fast-food establishment — albeit such a sheer symbol of Westerness throughout the world — feels it is worthwhile to remind its customers that Thailand and the United States has been friends for 200 years, why can’t we have a nice stamp to commemorate that fact? Even North Korea has regularly portrayed its relations with the U.S. on stamps, although they aren’t exactly promoting anything remotely friendly or diplomatic.. 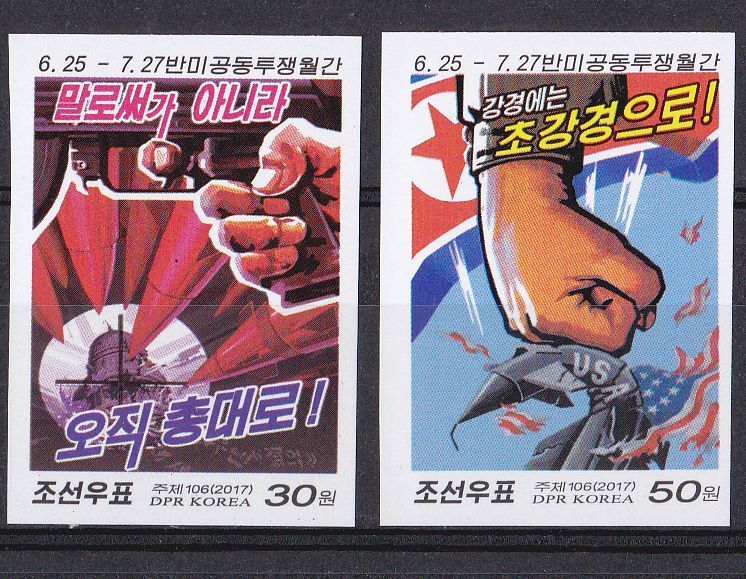 The first recorded contact between Thailand (then known as Siam) and the United States came in 1818, when an American ship captain visited the country, bearing a letter from U.S. President James Monroe. Chang and Eng Bunker immigrated to the U.S. in the early 1830s. In 1832, President Andrew Jackson sent his envoy Edmund Roberts in the U.S. sloop-of-war Peacock, to the courts of Cochin-China, Siam and Muscat. Roberts concluded a Treaty of Amity and Commerce on March 20, 1833, with the Chao-Phraya Phra Klang representing King Phra Nang Klao; ratifications were exchanged April 14, 1836, and the Treaty was proclaimed on June 24, 1837. The Treaty of 1833 was the United States’ first treaty with a country in Asia, making Thailand truly America’s oldest friend in the region.

On the occasion of the 150th anniversary of the Treaty, it was revealed that President Andrew Jackson had given the king (later known as Rama III) a gold sword with a design of an elephant and an eagle chased on a gold handle. The king had also been presented a proof set of United States coins, which included the “King of Siam” 1804 dollar struck in 1834. The set, minus a Jackson gold medal, was purchased for a record price of U.S. $8.5 million by Steven L. Contursi, President of Rare Coin Wholesalers of Irvine, California on November 1, 2005. The set had been sold by Goldberg Coins & Collectibles of Beverly Hills, California, on behalf of an anonymous owner described as “a West Coast business executive,” who purchased it for over U.S. $4 million four years before.

Perhaps Thailand Post had ignored the United States considerable contribution to the Kingdom as an indicator of current U.S.-Thai relations.  Since the 2014 military coup, the United States has withheld military aid and high-level engagement, unwilling to resume them until a democratically-elected government is restored. That could be quite a bit in the future as elections have been postponed each year and were indefinitely put on hold by the death of His Majesty King Bhumibol Adulyadej and the ensuing year-long mourning period. As in the Philippines, China has been more than happy to fill this void with their own aid, steadily prying Thailand away from the U.S.-led alliance system.

While 2018 does mark the bicentennial of Thai-American contact, perhaps Thailand Post would like to mark the anniversary that the Treaty of Amity and Commerce was signed, formalizing diplomatic relations. Still, 2018 is the 185th anniversary of that event. Please don’t make us wait another 15 years for a stamp marking our long friendship.

In the absence of a stamp issue, at least those Americans who live here or are just passing through can feel proud that McDonald’s has remembered us. If only they would give us a free Big Mac if we show them our passport….

The U.S. Consulate produced a nice logo in 2013 on the occasion of the 180th anniversary of the Treaty of 1833. The slideshow below includes a few additional anniversary logos and Thailand Post stamps…