The franking labels are based on the graphic profile of the Åland anniversary year created by Annika Rehn Zetterqvist, and illustrate a few symbols that represent Åland and Ålanders’ willfulness.

“The biggest challenge was the limited space and the request that the motifs would fit together like a puzzle. There is no main symbol except possibly the sea, which of course cannot be ignored since we live on an island. Here, you find the important maritime history with both Pommern and the Lågskär lighthouse, but also the midsummer crown as a familiar symbol of Åland’s cultural history. The deer represents public Åland, while the swan is a flirt with Finland. The Åland creativity and nature interact in the dragonfly created from cutlery spoons by scrap artist Johan Karlsson. The berry with leaves underneath is the logo of Åland’s development and sustainability agenda. The Åland network Bärkraft (sustainability) has won EU’s sustainability award for having defined its own local agenda based on the UN’s global sustainability objectives. It suited the topic willfulness well, the courage to go your own way and create something of your own.”

In 2019, Annika Rehn Zetterqvist won the contest announced by the Åland Government to design a logo for the 100th anniversary, and she and her colleagues at the April communication bureau were commissioned to also create its graphic profile.

Self-adhesive franking labels are a popular product, seeing that they may easily be affixed to letters and parcels. Åland Post Stamps sells the labels in series of 4 with a set value but, at the Mariehamn post office and Åland Post Stamps, you can order labels with optional denomination and in other quantities.

Tractors became increasingly predominant in farming during the 1930s and, when demand was greater than supply, the idea of converting cars into tractors was conceived. Such a tractor is exactly what you see on the first stamp. The car-tractor was built by Runar Karlsson on his home farm in Ringsböle, Jomala, in the early 1940s. His grandson Kristoffer Karlsson gives a detailed description of the construction of the tractor:

“The motor came off a Ford model A and the tractor was initially operated on wood gas. It was later retrofitted when gasoline became available. The frame is made from own-produced steel bark and the fenders from sheet metal. The radiator grille comes from a Chevrolet. The rear axle is probably from a Ford truck, while the front axle is from a Ford A but forged to obtain higher ground clearance. The tractor has two gearboxes, one of which acts as a high/low gear; grandpa took out a hole and mounted a pulley to obtain two different speeds.”

The other stamp shows a red 1956 Valmet 20. This tractor is located on the archipelago island of Sottunga. The owner, Raul Petrell, received it as a gift from his mother when he was 10 years old.

“It was the first tractor on the farm when I received it as brand new from the factory on October 14, 1956; it cost 384,500 old Finnish marks. For more than 10 years, I used the tractor in agriculture in front of the mower, among other implements, but also to run logs out of the forest”, Raul reminisces.

A Century of Willfulness 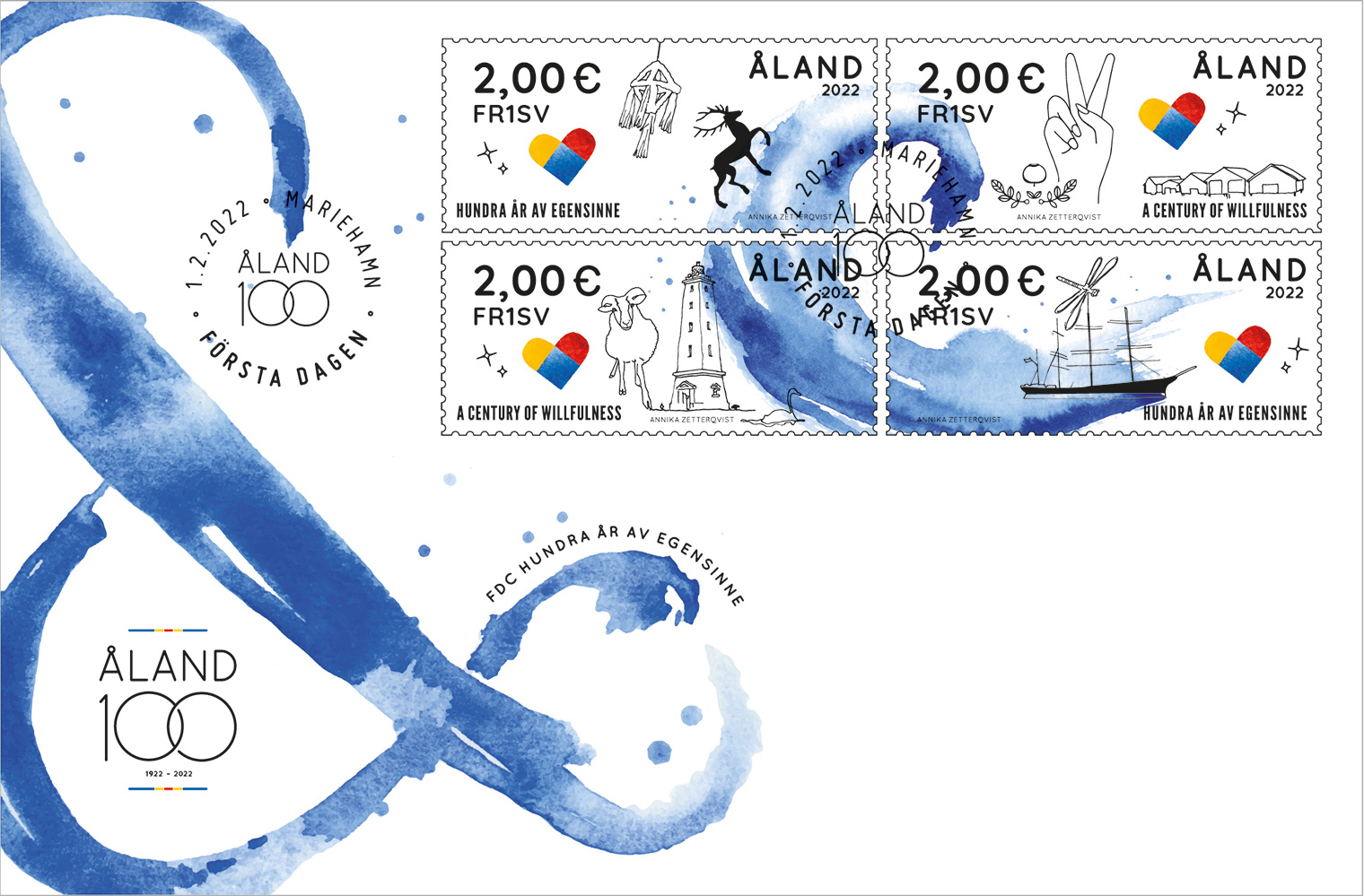 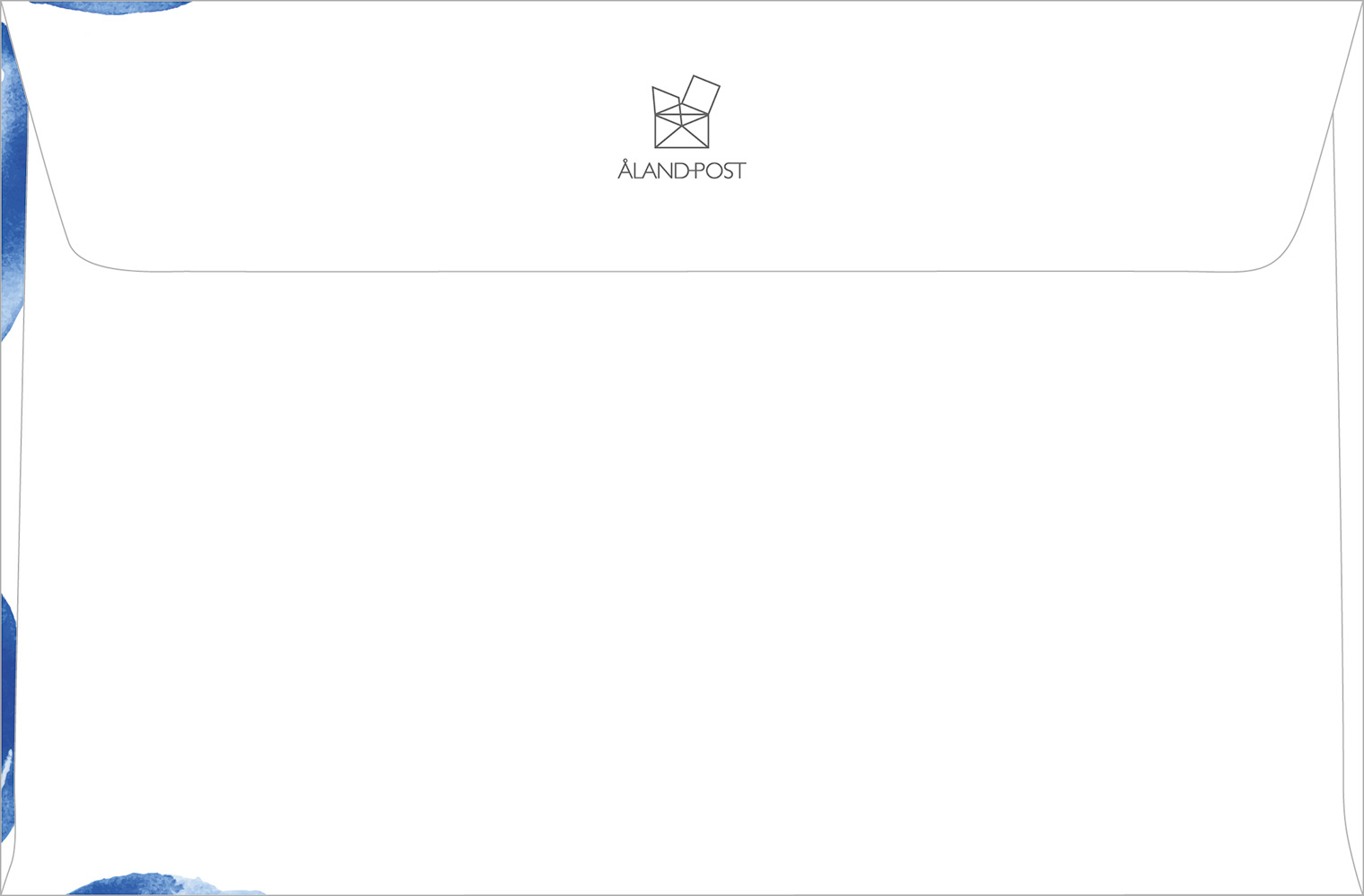 The design of this year’s franking labels is based on the graphic profile of the Åland anniversary year, and its slogan “A century of willfulness” is also the name of the series. On the franking labels, you will find many different types of symbols for Åland and Åland willfulness, such as museum ship Pommern and the Lågskär lighthouse and the characteristic Åland midsummer crown. The deer represents public Åland, while the swan is a flirt with Finland, the mother country. The peace sign alludes to the demilitarization. Åland creativity and nature interact in the dragonfly created from cutlery spoons. The four franking labels are self-adhesive, and a series consists of four labels with the four motifs. All four franking labels have the same value.

The first day cover for the 2022 series of franking labels shows a flowing watercolour wave that forms an and-sign that stands for “and so much more”. The labels illustrate a few symbols that represent Åland and the Ålanders but, of course, there are so many more. The first day cancel shows the logo of the anniversary year. 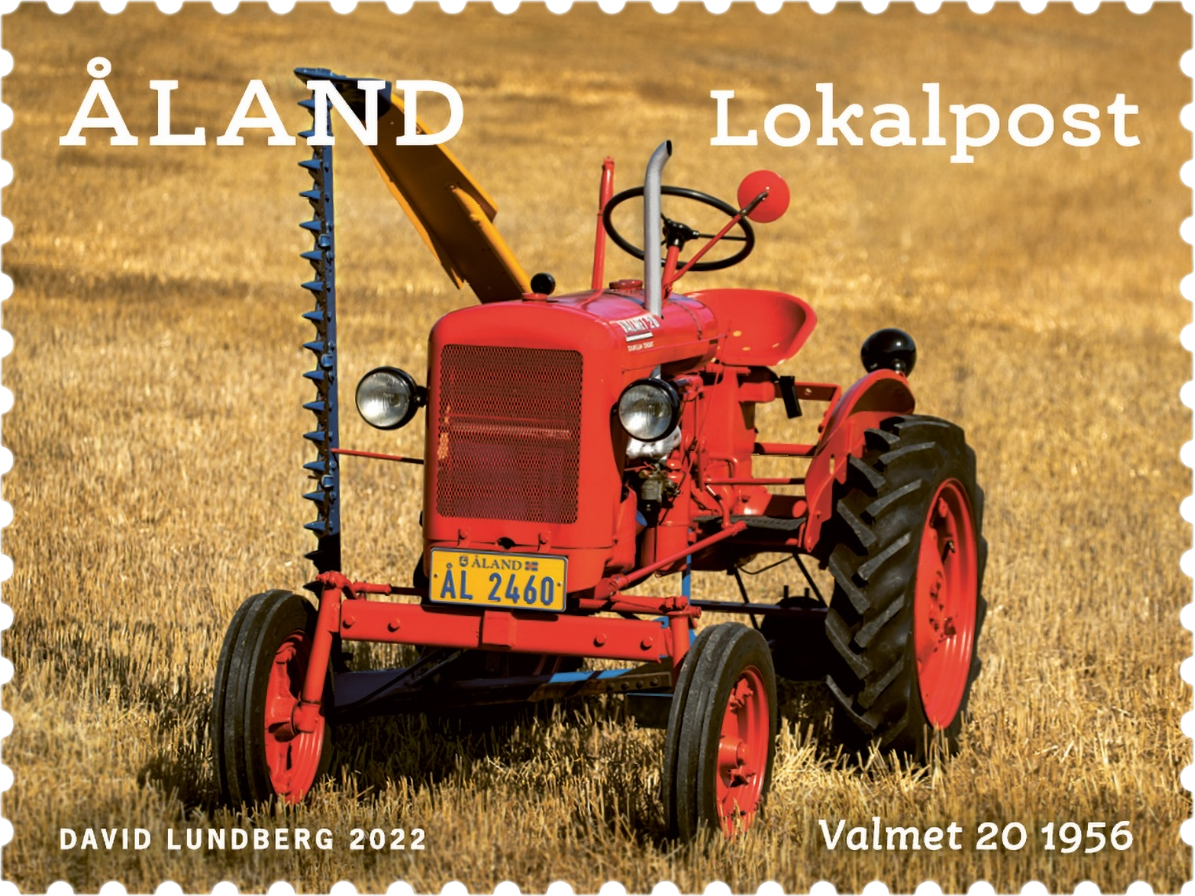 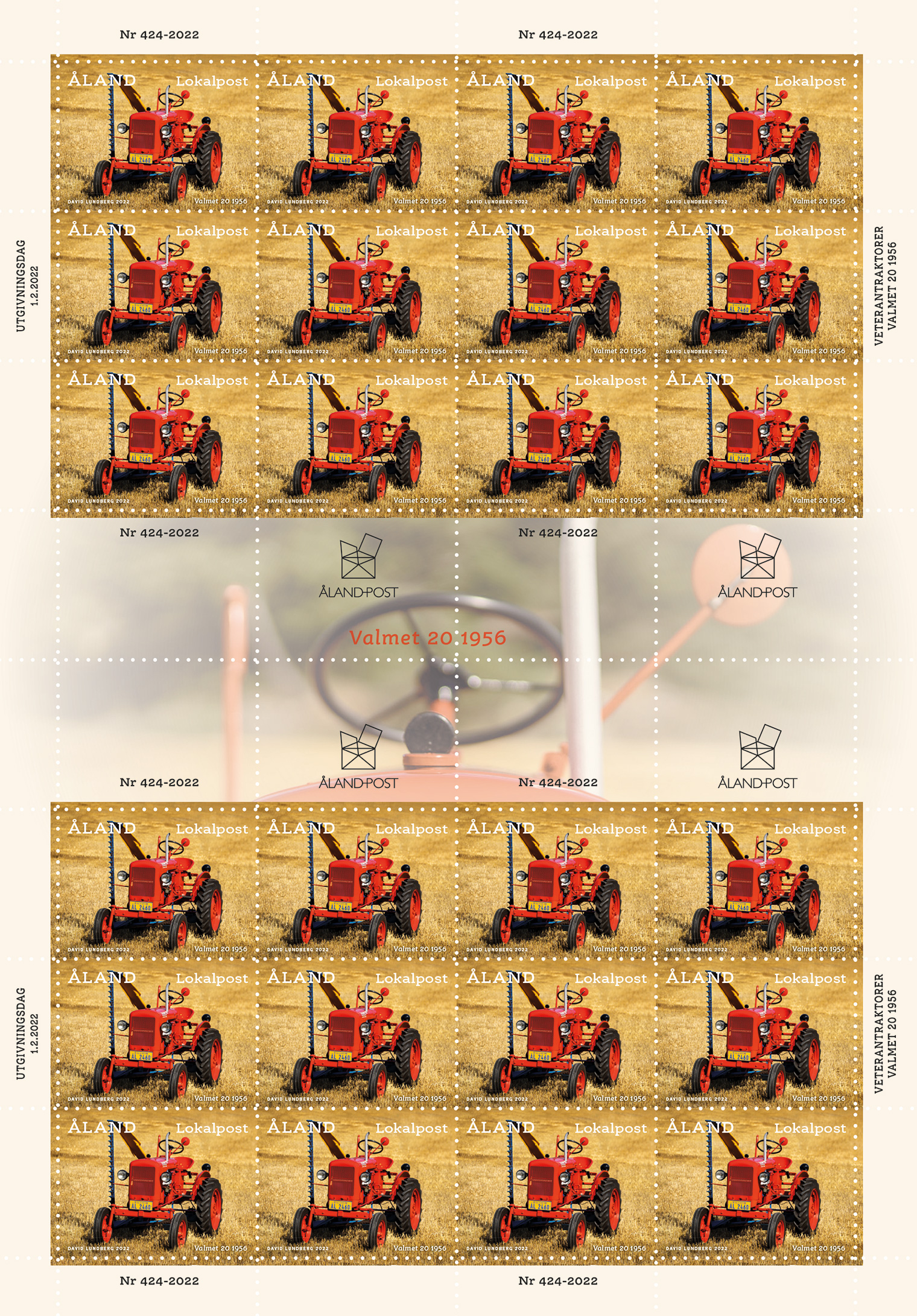 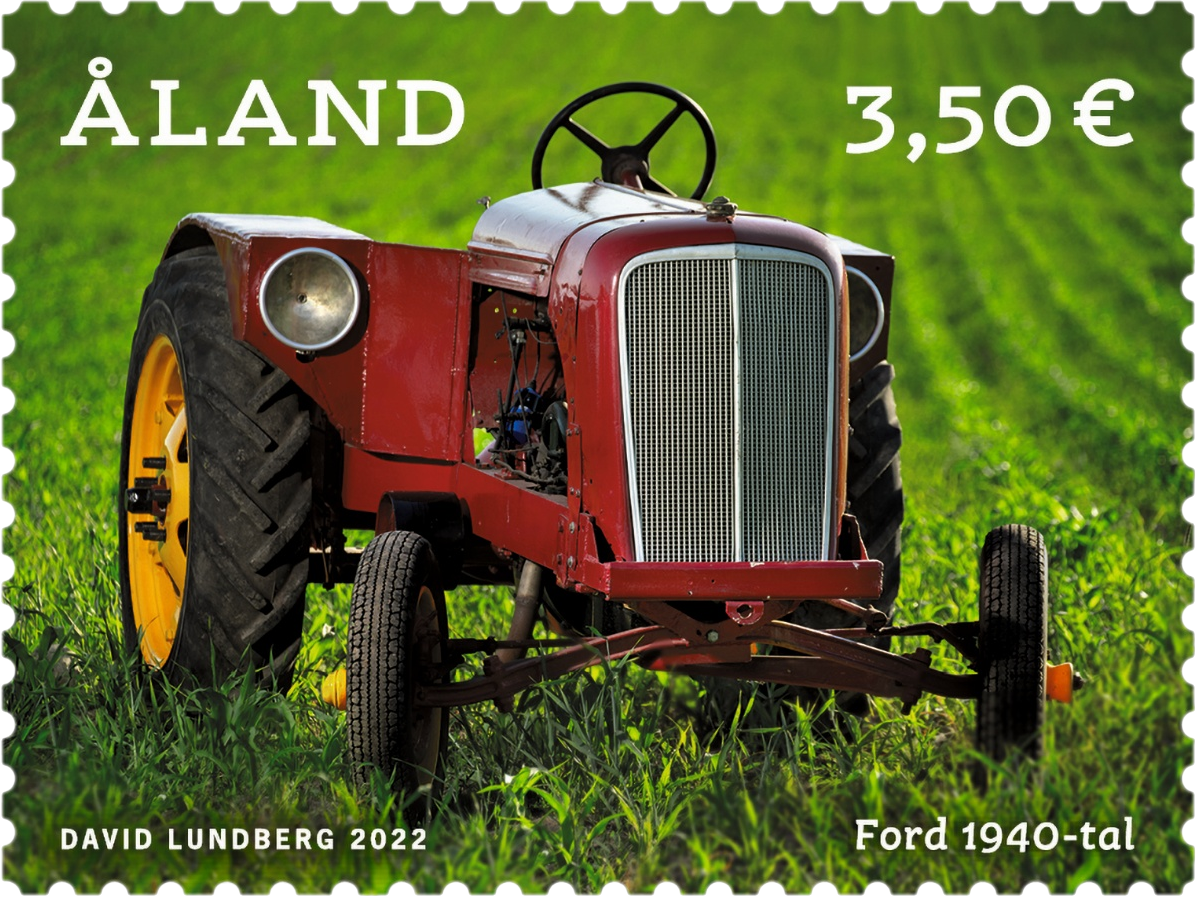 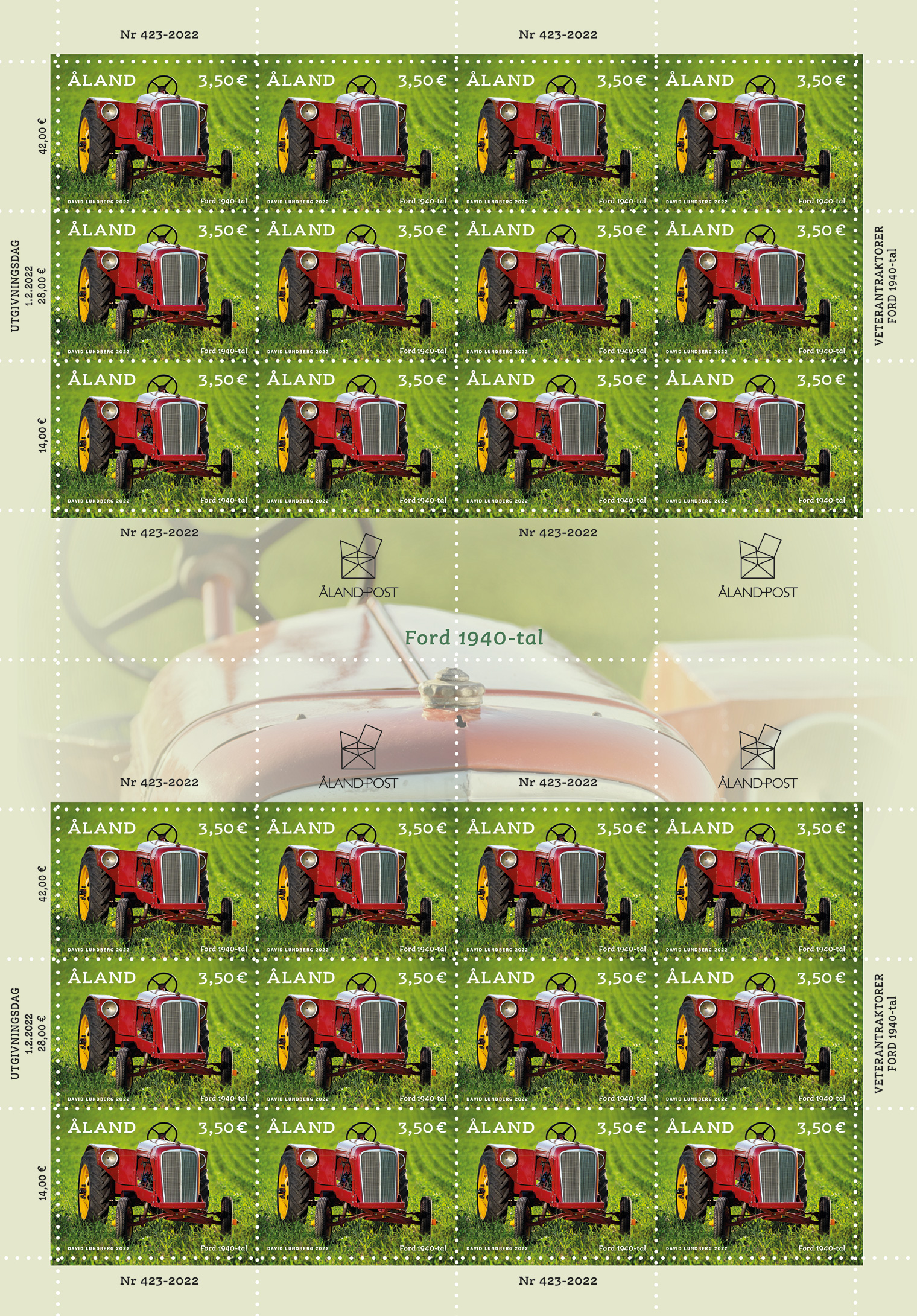 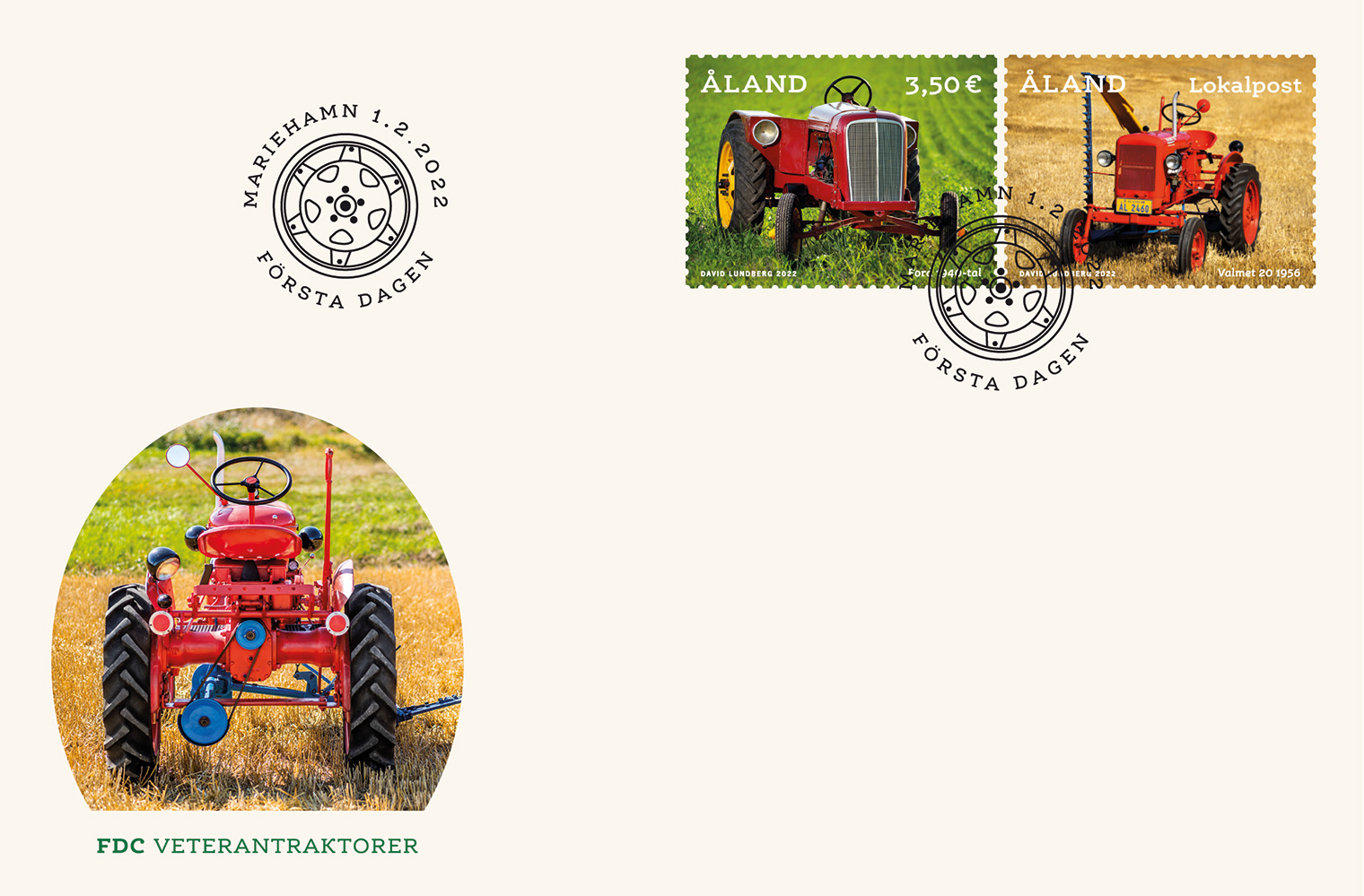 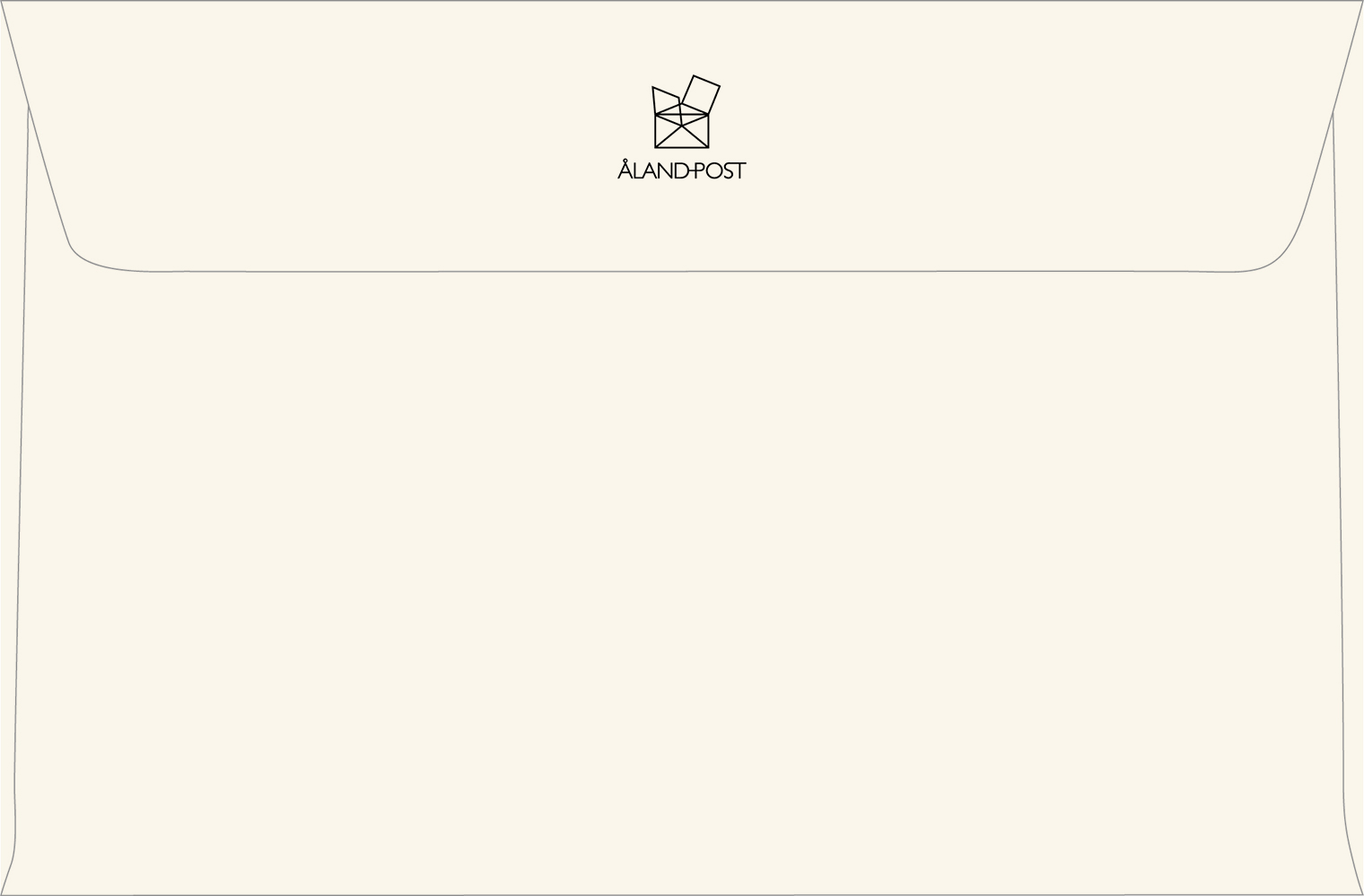 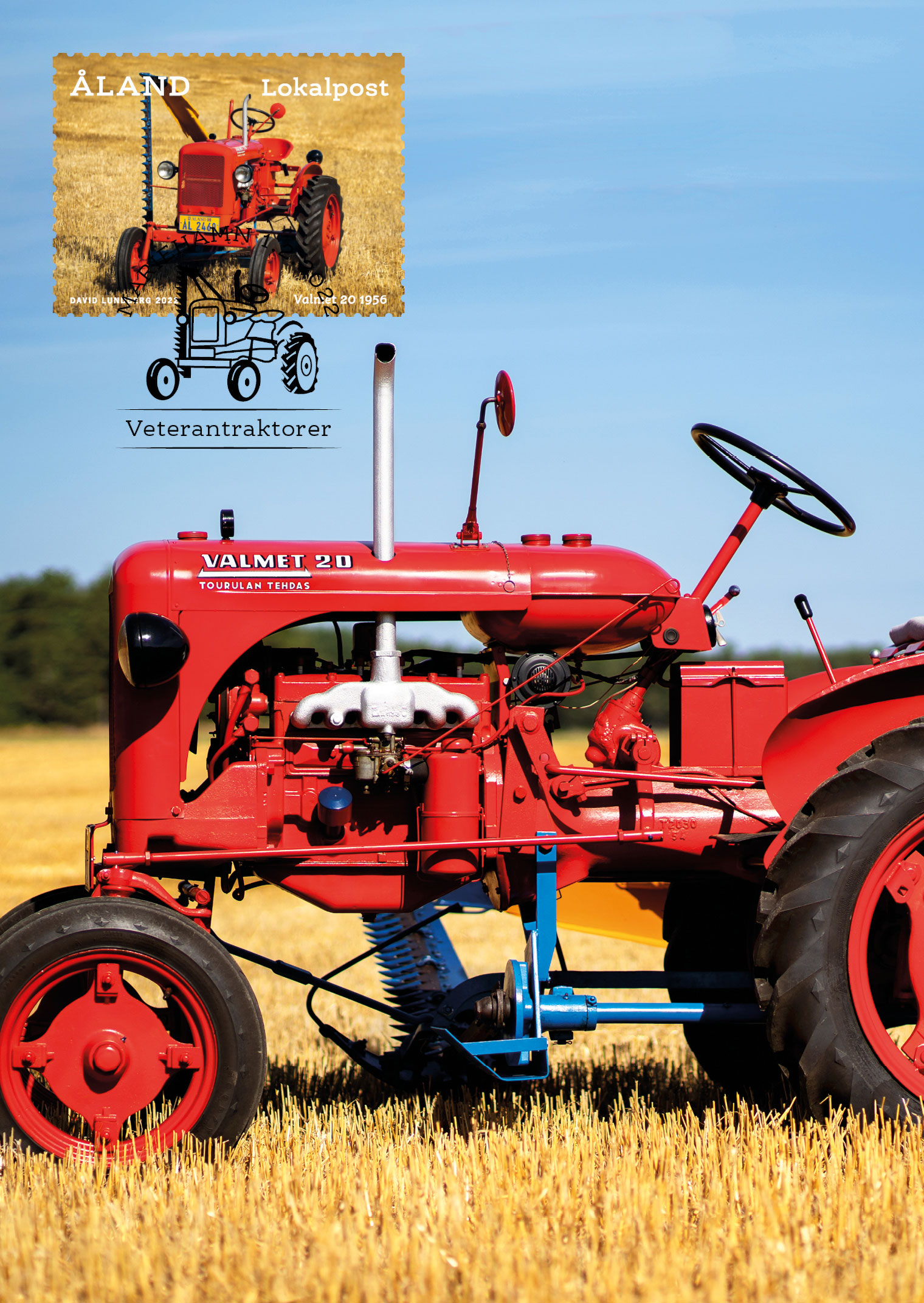 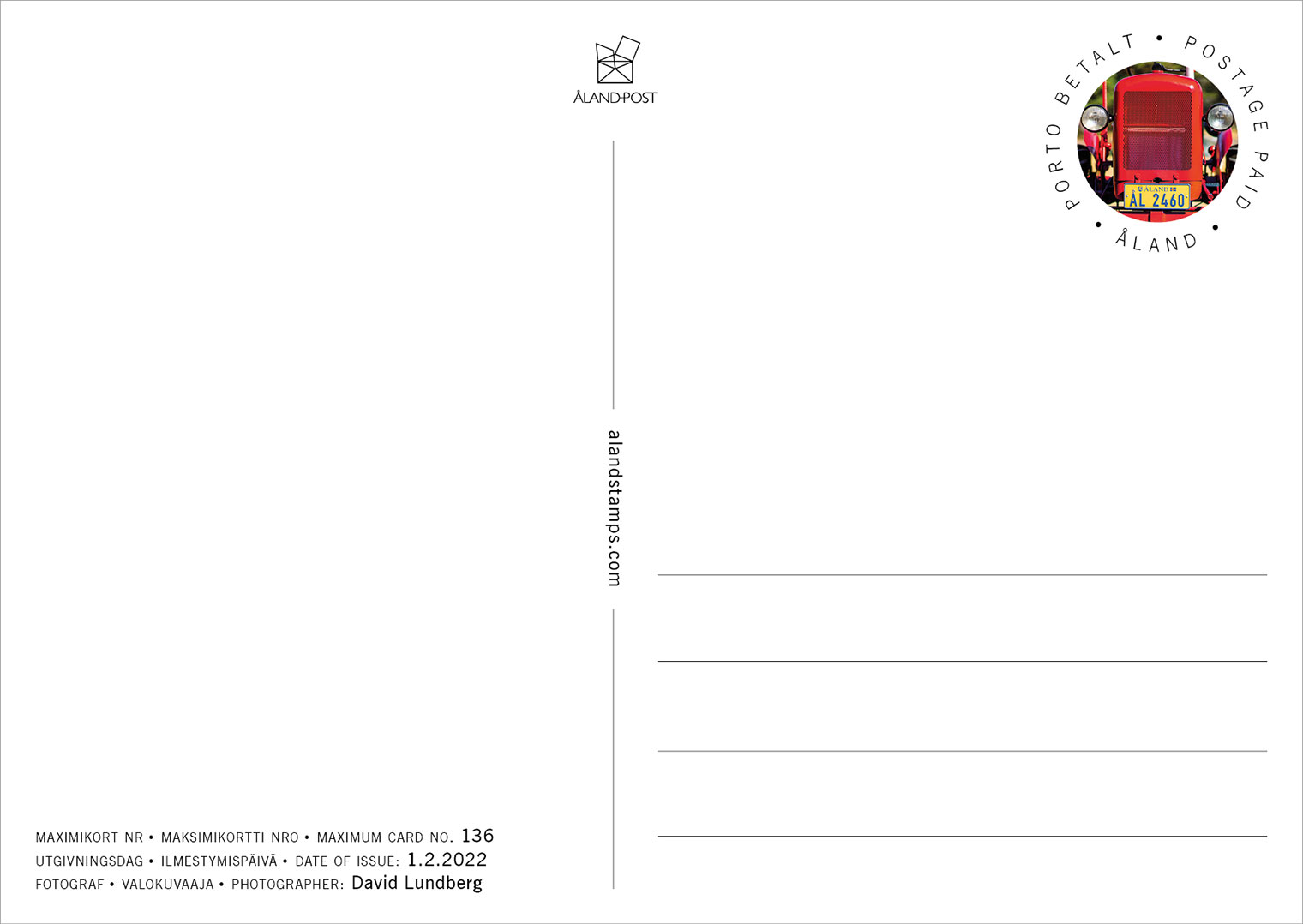 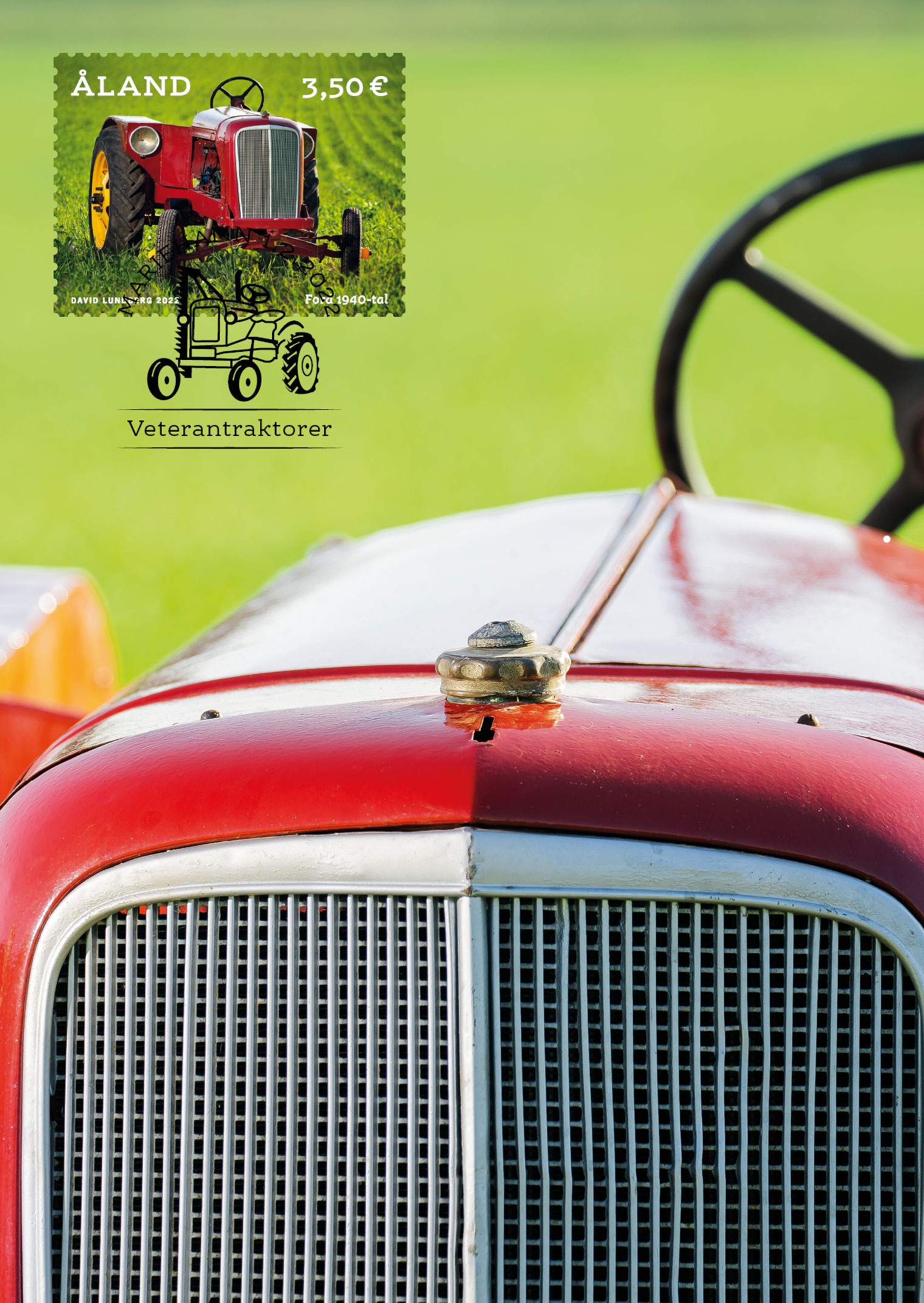 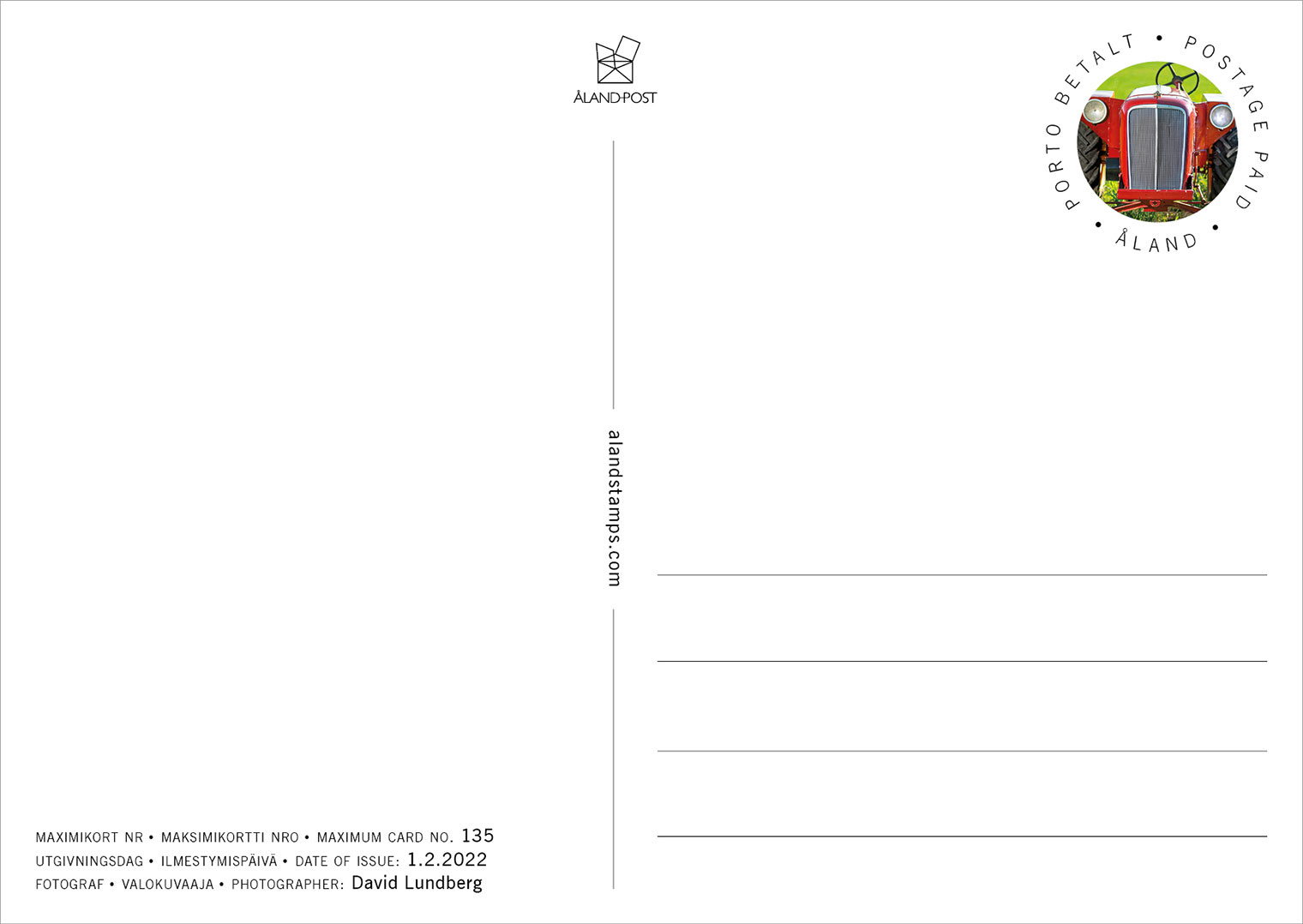 The stamp presenting a Valmet 20 from 1956 is one in a 3-year series featuring Veteran tractors in Åland. Starting in 2021, the stamp series will be completed in 2023. The series consists of a total of 6 stamps. Production of the legendary Old-Reliable Valmet tractor started in Finland in 1951. The owner, Raul Petrell, received this Valmet 20 from 1956 as a gift from his mother when he was 10 years old. The tractor is still located on the farm on the island of Sottunga.

The stamp presenting a car-tractor from the early 1940s is one in a 3-year series featuring Veteran tractors in Åland. Starting in 2021, the stamp series will be completed in 2023. The series consists of a total of 6 stamps. The car-tractor was built in the early 1940s and is still preserved at the same farm in Ringsböle, Jomala. The motor came off a Ford model A, and so did the front axle. The frame and the fenders were self-made. The rear axle is from a Ford truck and the radiator grille comes from a Chevrolet.