While Australia Post does release some very attractive stamps, I do take exception to the sheer amount of PRODUCT as well as the frequency of their issues.  I try to keep track of the regular and commemorative stamps but usually avoid the numerous additional items such as PNC’s and what amount to official personalized items. Thus, I will probably never report on their stamps portraying the Star Wars series The Mandalorian, for example (although I do enjoy the show).

At least Australia is starting 2022 with a fairly light release, three stamps picturing sailboats. These are accompanied with the requisite first day cover, a presentation pack, set of three maximum cards, and the opportunity to purchase gutter strips of each stamp should you wish. There is one associated stamp and medallion cover which I picture below for the sake of completion. 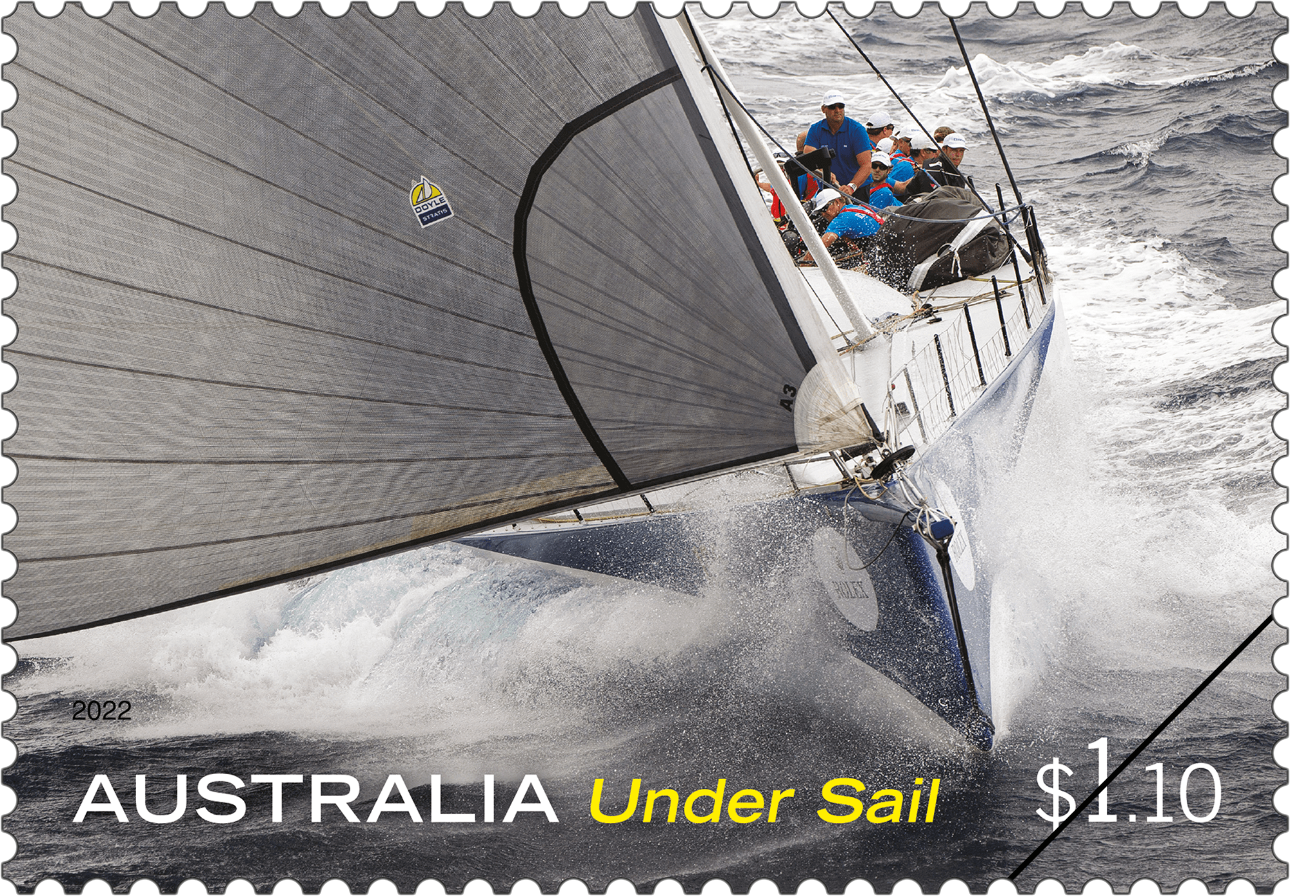 The stamp features a super-maxi at the start of the 2016 Rolex Sydney Hobart Yacht Race, Australia’s premiere ocean race held each summer. The photograph is by Andrea Francolini.

This breed of yacht was developed for the major ocean races from the 1970s, but into the first decade of the 2000s it was superseded in size by the modern super-maxi, which instead of 75 to 82 feet is up to 98 feet (30 metres). Because these yachts range in size and performance, they race according to handicap system based on their size. The crew usually comprises between 12 and 20 sailors. 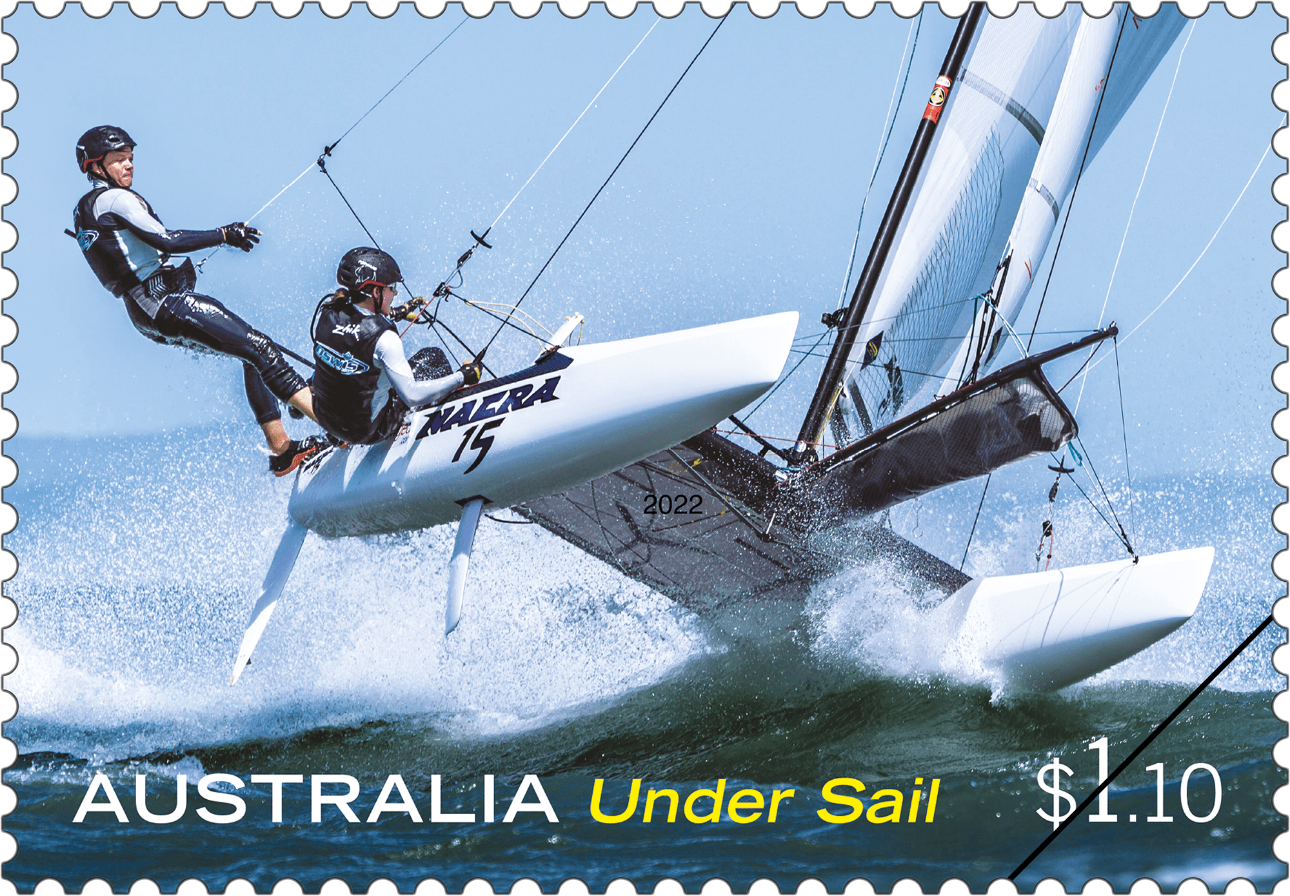 This stamp shows a Nacra 15 catamaran in competition at Moreton Bay during the 2018 Australian Sailing Youth Championships, hosted by the Royal Queensland Yacht Squadron. At 15 feet (4.5 metres), the Nacra 15 is a smaller iteration of the Nacra 17, developed for Olympic competition. The stamp photograph is by Beau Outteridge.

The wide beam of the catamaran’s double hull provides stability, and its shallow draft and light displacement improve hydrodynamic resistance and, therefore, speed. Speed is also boosted by the dagger boards attached to the underside of the hulls, seen in the exposed hull in the stamp. Crew members to use the trapeze to counter-balance the pressure of the wind on the sails. 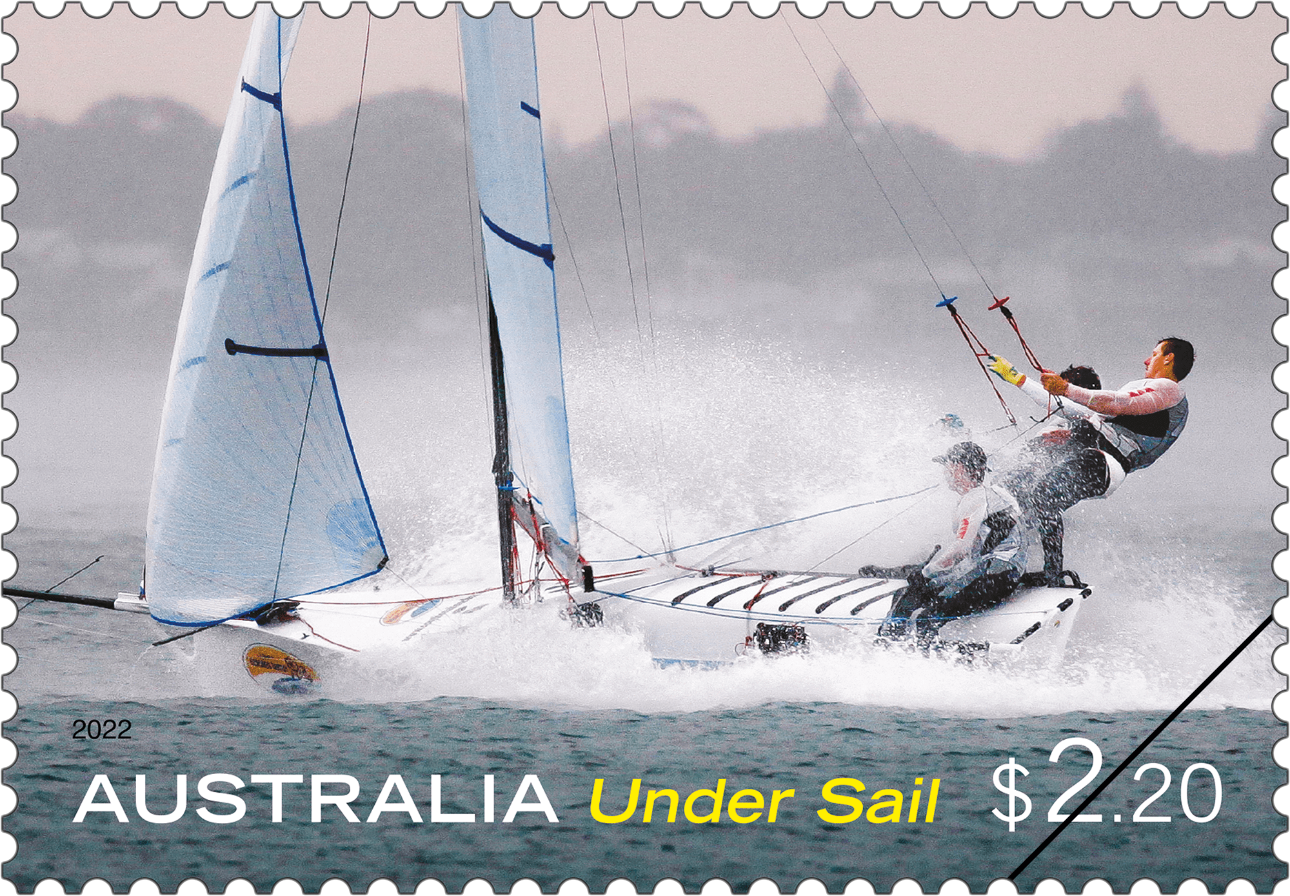 The stamp shows the 16-foot skiff plying the waters of Lake Macquarie, a strong southerly having just hit the racing fleet. The stamp photograph is by Michael Chittenden.

The 16-foot (4.88 metres) skiff has a long history in Australia, where it has been around for more than 100 years. The class is unique to this country, founded in Balmain in 1901, and the skiff is a popular high-performance dinghy. With an overall length of 4.88 metres, the 16-foot skiff has a beam of 1.52 to 1.78 metres, and a hull, spar and foils made from carbon composite reinforced polymer. Generally carrying a total sail area of 67 square metres (sails and spinnaker) and with a total weight of no more than 85 kilograms, the skiff has a high sail to weight ratio, guaranteeing speed. 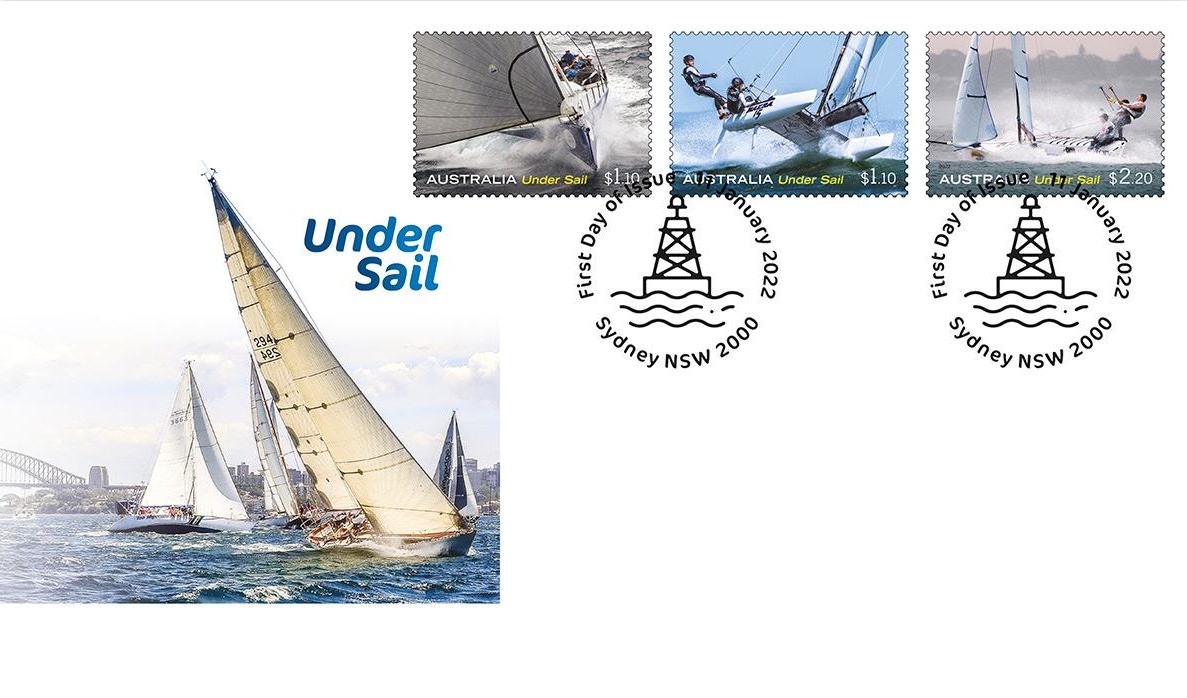 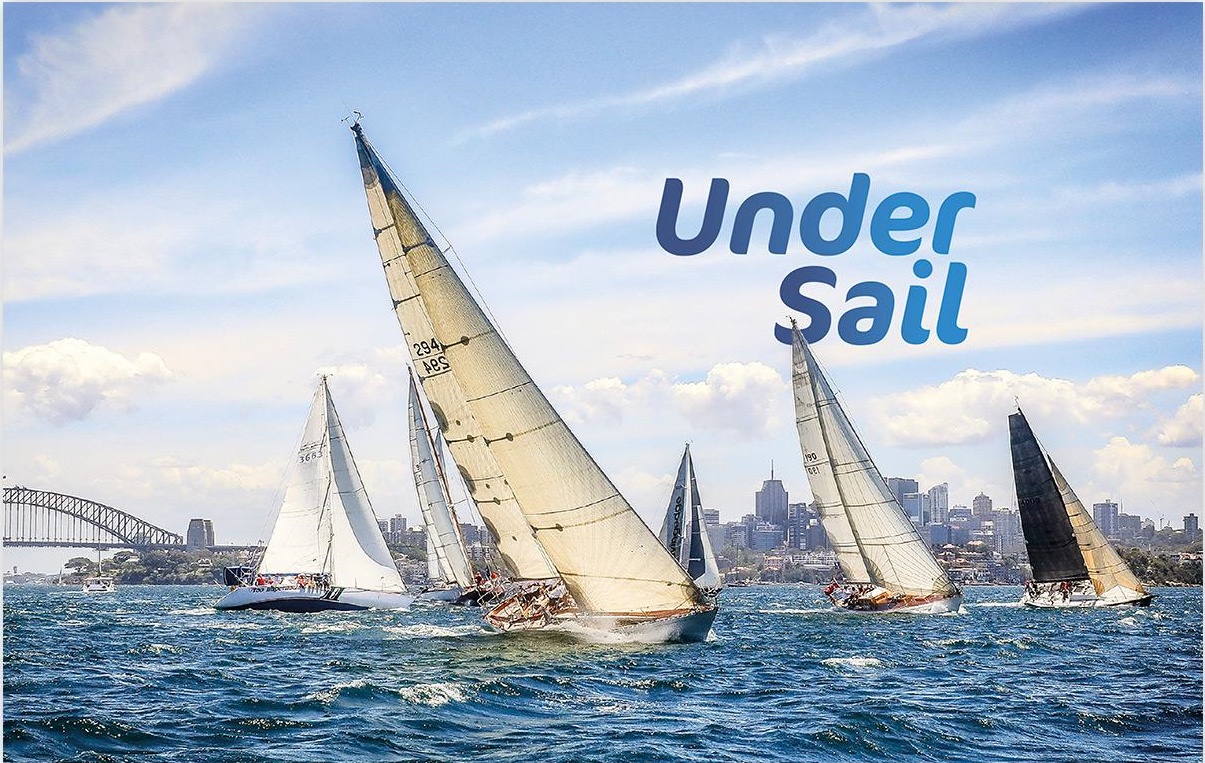 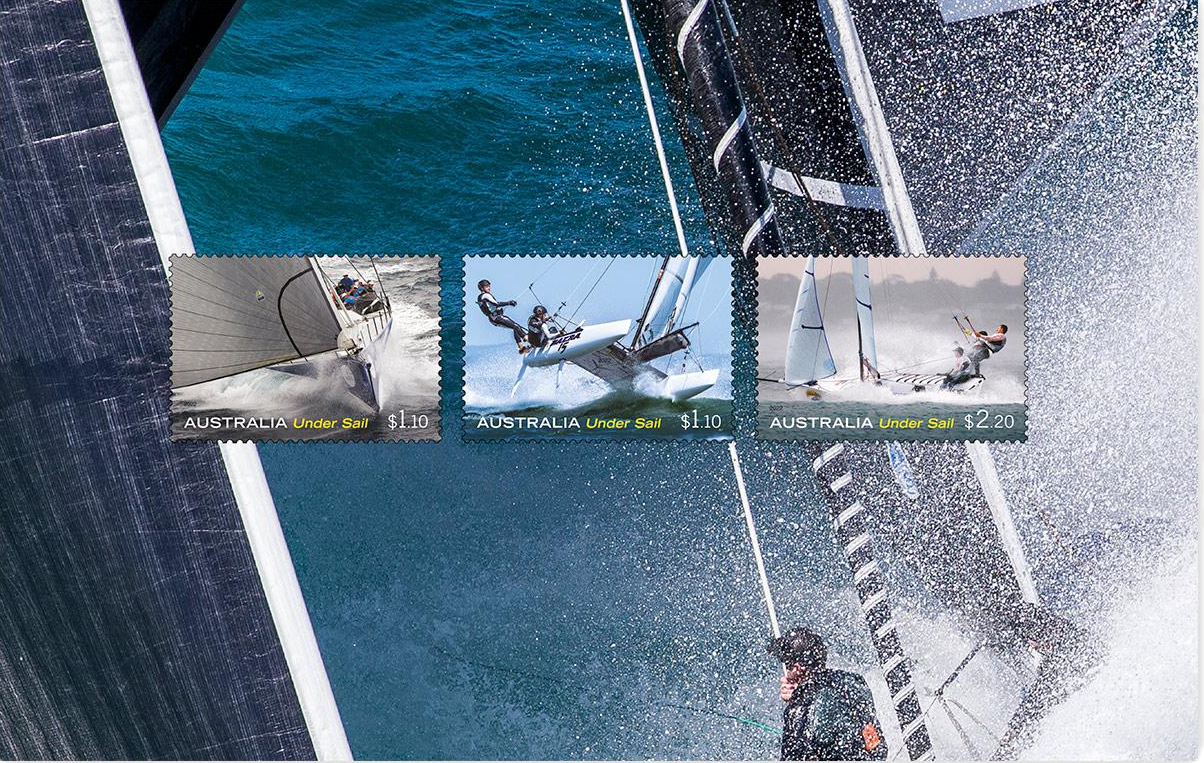 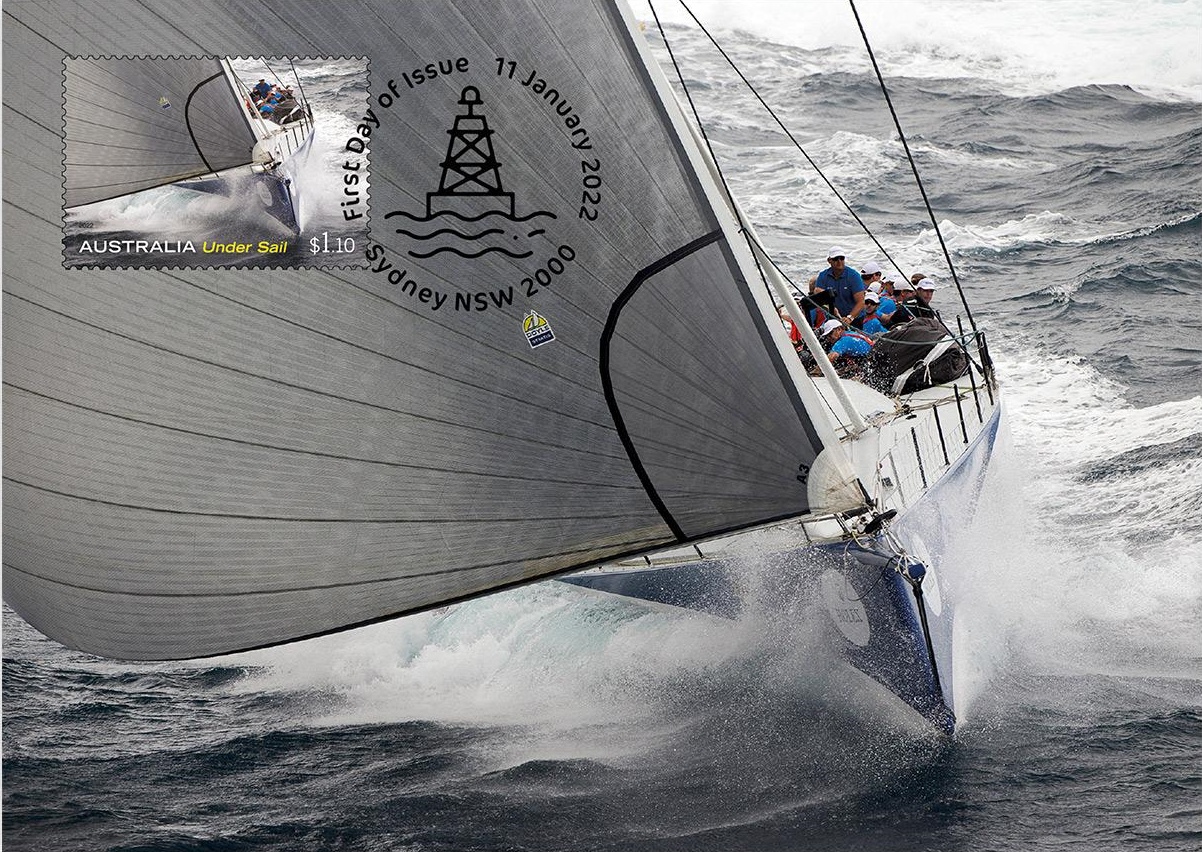 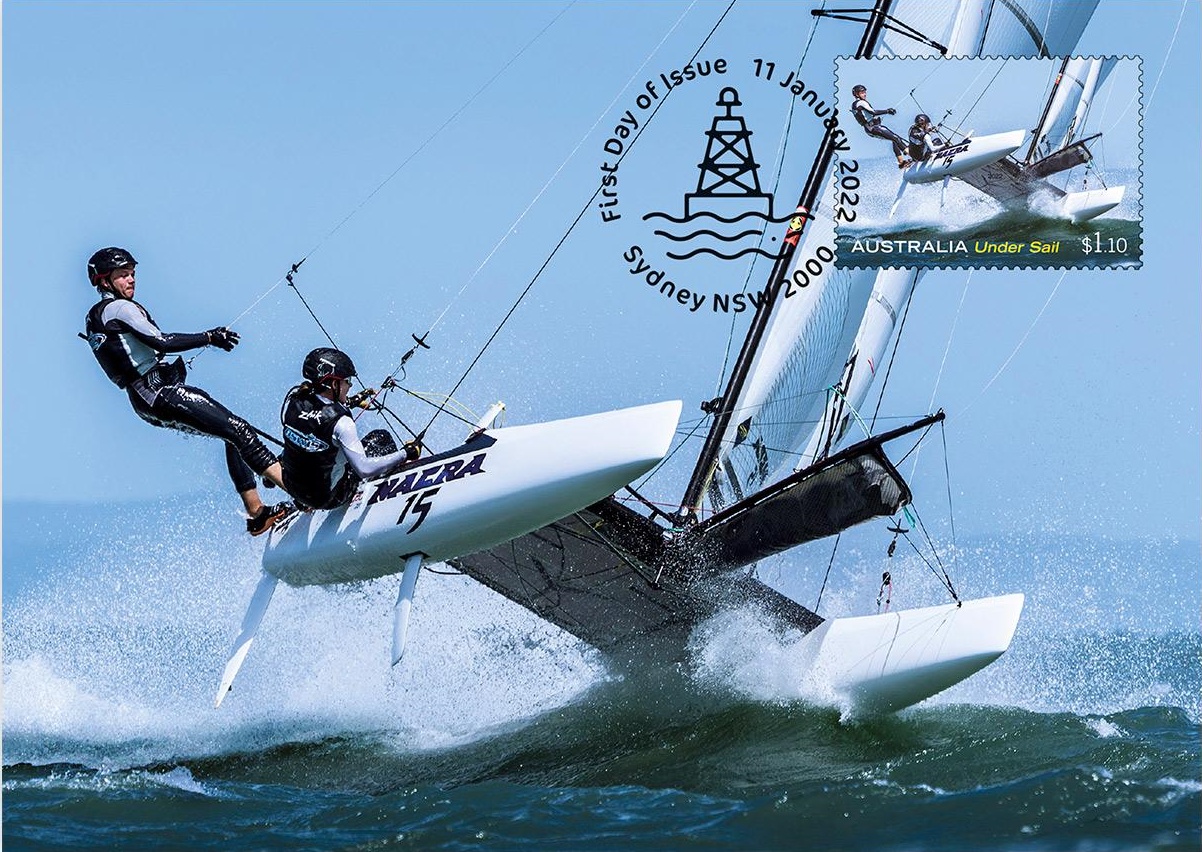 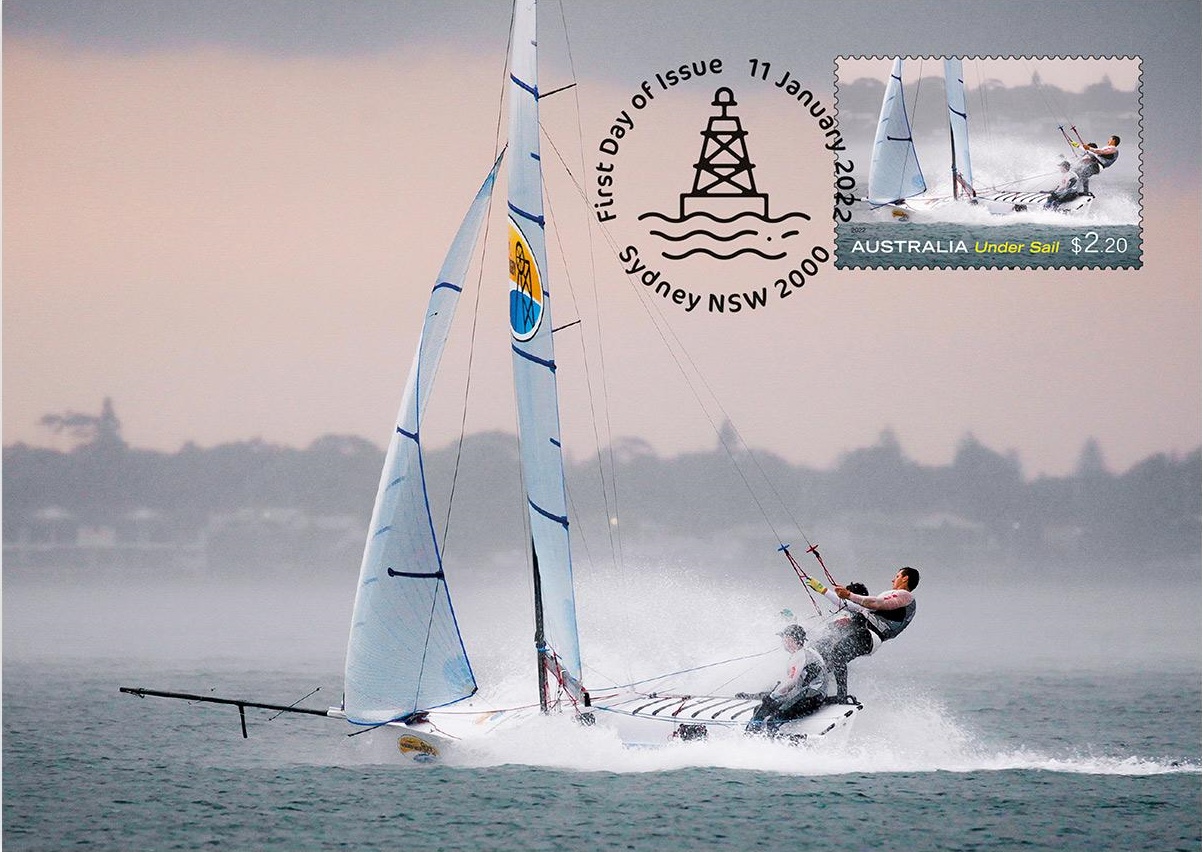 Under Sail Stamp and Medallion Cover: 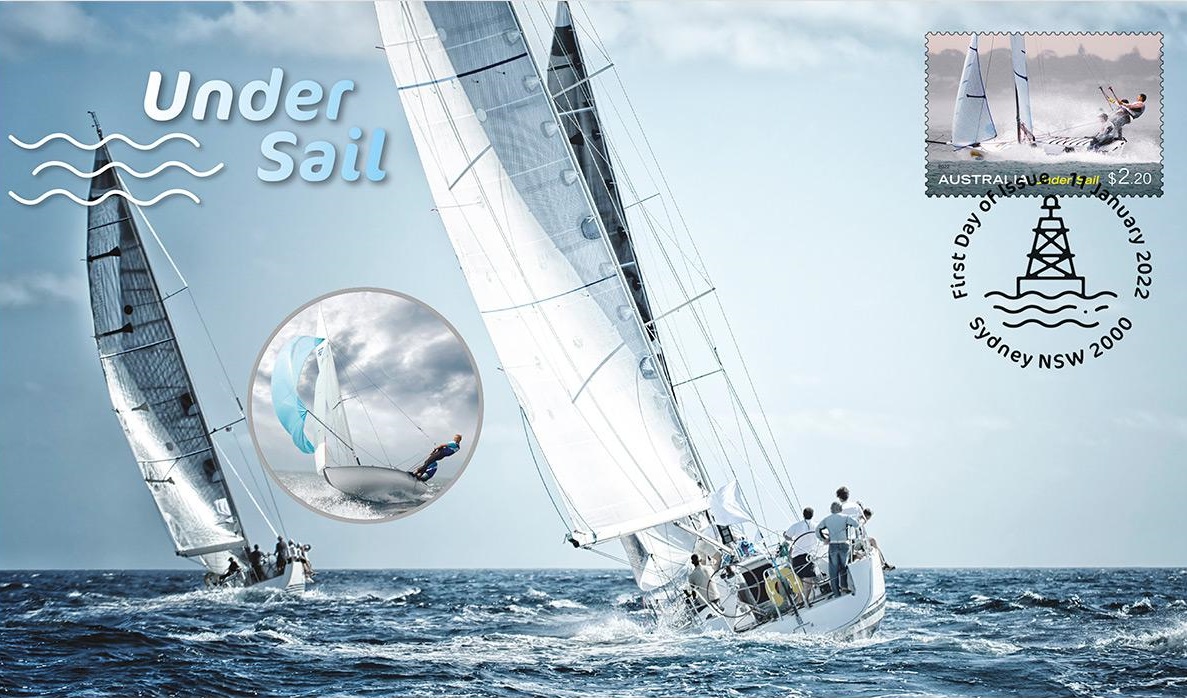 This stamp and medallion cover is a very limited collectable, featuring a pictorial envelope with the $2.20 stamp from the Under Sail stamp issue and related medallion. The stamp is postmarked – First day of issue | 11 January 2022 | Sydney NSW 2000 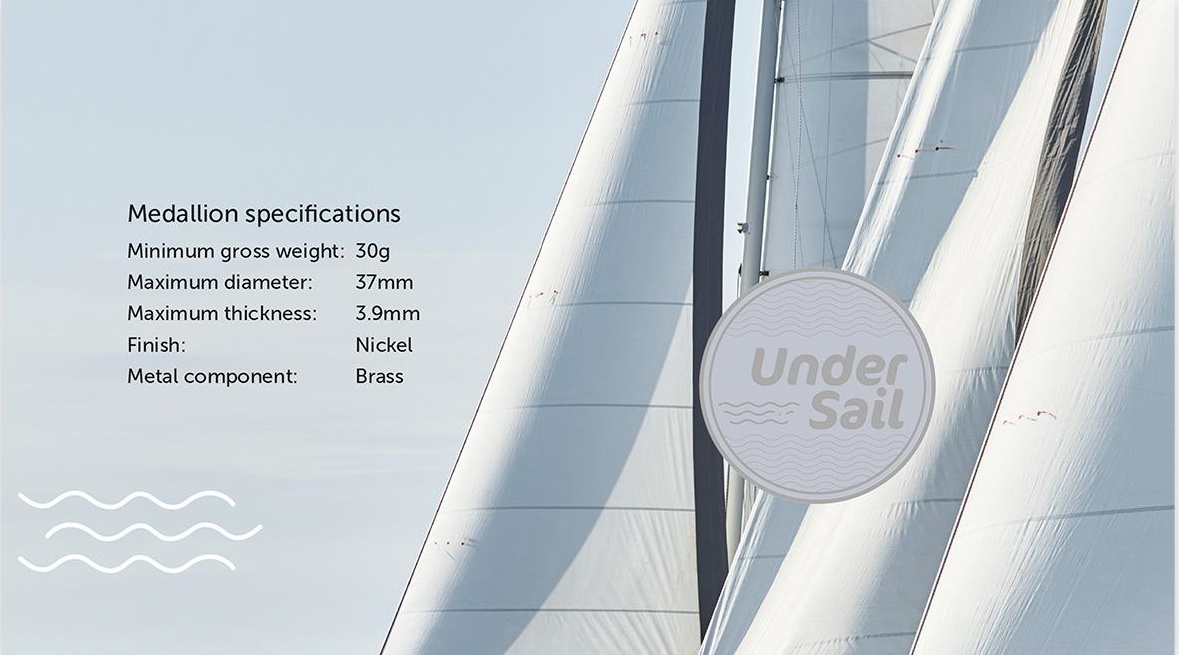 Originating from the Dutch term jacht, meaning “hunt”, yachting, or sailing, now refers to both racing and cruising. Recreational racing was first recorded in the Australian colonies in the 1820s, and today, there are more than 360 yacht clubs around Australia – an island nation surrounded by water and known for its love of water pursuits.

The national governing body for the sport, Australian Sailing, has grown to more than 120,000 members for the first time in its history. Growing interest has perhaps been aided by the popularity the Rolex Sydney Hobart Yacht Race (established in 1945) and the America’s Cup, as well as Australia’s recent triumphs on the water in successive Summer Olympic Games.

The stamps in this issue encompass three distinct vessel designs: the super-maxi, catamaran and 16-foot skiff. The stamp photographs capture the energy and dynamism of the sport, and the athleticism, coordination and skilfulness required of the crews.