Spain produces quite a few interesting and attractive stamps each year and 2022 should be no exception.  January kicks off with four stamps and two ATM franking labels, each accompanied by pictorial postmarks.  Subjects include Gastronomic Tourism, Minerals, yet another COVID-19 item, and a continuation of the “12 Months 12 Stamps” series featuring Spanish provinces. 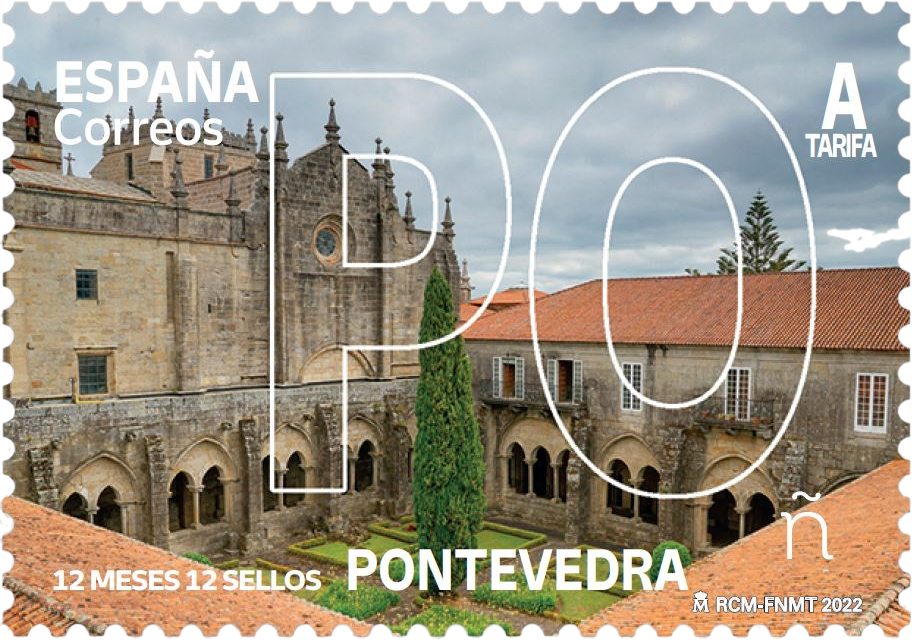 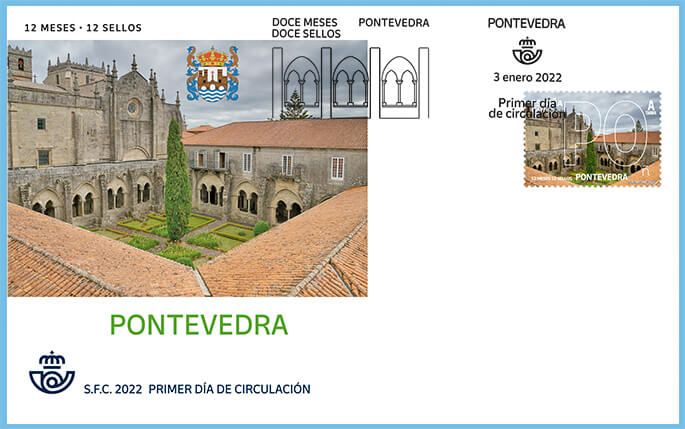 Correos continues to travel through the stamps throughout the Spanish geography, stopping in this case, in the province of Pontevedra.

The stamp has as its main motif, a beautiful image of the Cathedral of Tui, with its monumental cloister as the protagonist. This cloister has the particularity of being the oldest in the Galician community. Its origin dates back to the first half of the thirteenth century, highlighting its layout following the Cistercian influence.

The province of Pontevedra brings together in a few kilometers both mountains and coast, that of the Rías Baixas, where you can find places of great beauty such as the National Park of the Atlantic Islands.

Special mention deserves its Romanesque traces, the typical pazos or the megalithic monuments that can be found in Marín or the petroglyphs in Vilaboa and Popio.

On this tour of Pontevedra, we must not forget such deep-rooted traditions as A Rapa das bestas de Sabucedo, the Viking Pilgrimage of Catoira, the Corpus Christi of Ponteaeras or the Albariño wine festival of Cambados and the Arribada de la Carabela Pinta de Baiona, declared of Tourist Interest.

Galicia is a land of good delicacies, and Pontevedra is one of its greatest exponents with seafood and its Albariño wine, known throughout the world. Arcade oysters or Carril clams are the most desired products on tables throughout Spain and even abroad.

In Vigo, the Llanderas cake, a dessert created by a local pastry chef around the 50s, gives the sweet touch.

Pontevedra is impossible to summarize in a few words, islands and beaches, small villages, magical waterfalls, vineyards, ancient monasteries, castles and pazos with a lot of history make this province an impressive collage. 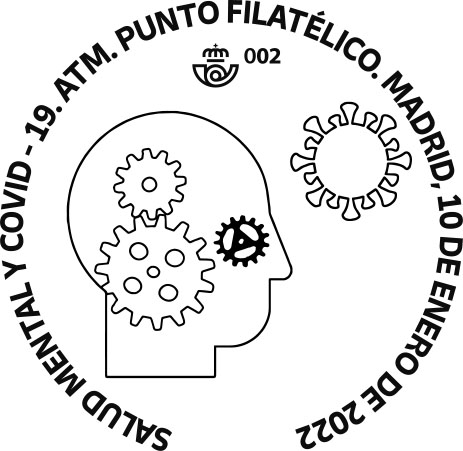 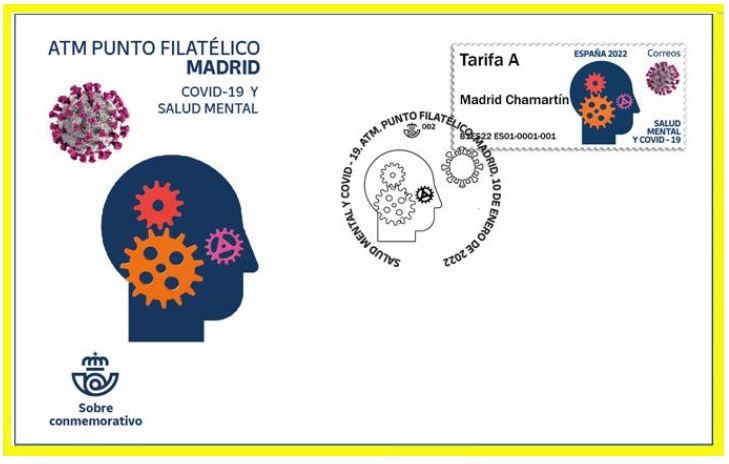 COVID patients and their families, women, children, the population with fewer resources or health workers have been the groups whose mental health has suffered the hardest blows in the last two years. The mission as a society is not to stigmatize mental disorders as a sign of weakness of those who suffer from them since making them visible is an example of courage because no one is safe from them, 10.8% of the Spanish population has consumed tranquilizers, relaxants or sleeping pills and 4.5% has taken antidepressants or stimulants in recent days. The theme chosen for World Mental Health Day in 2021 has been: Mental health care for all. Let’s make it happen.

Each of the ATMs will have an envelope and a commemorative postmark. 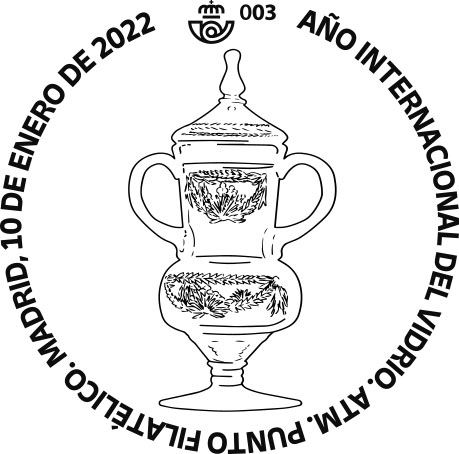 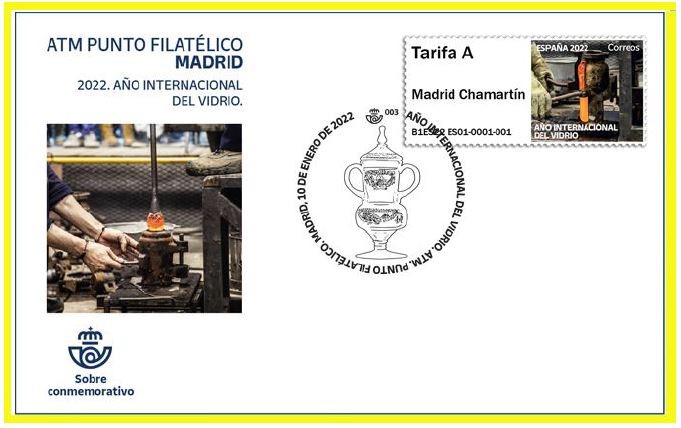 The United Nations General Assembly has declared 2022 as the International Year of Glass, recognizing its importance in sectors such as aerospace, automotive, healthcare, and architecture, among others. As resolution L.84 says: “Glass has accompanied humanity for centuries, enriching the quality of life of millions, and that, as one of the most important, versatile and transformative materials in history.” The image chosen is a photograph of the Royal Glass Factory of La Granja.

Each of the ATMs will have an envelope and a commemorative postmark. 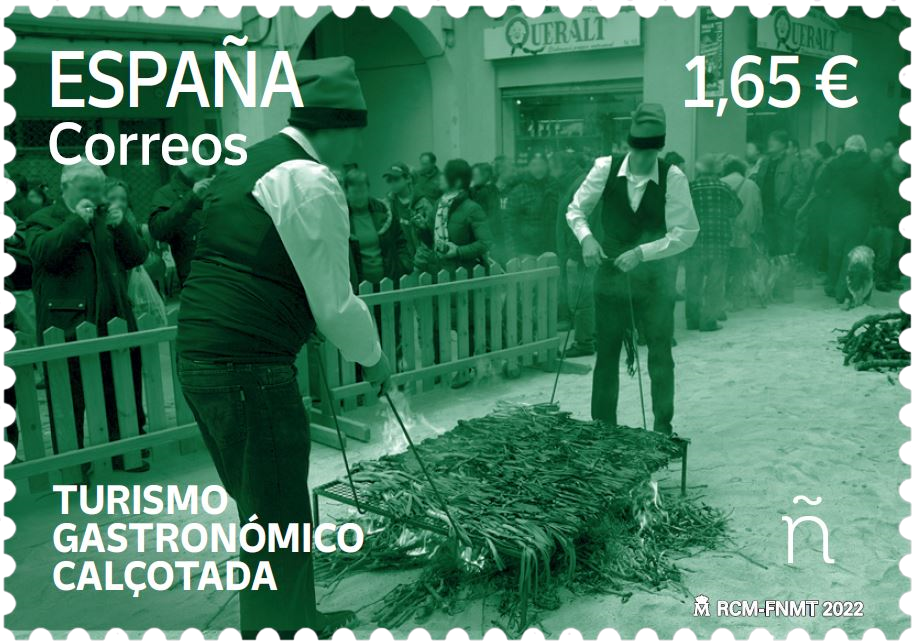 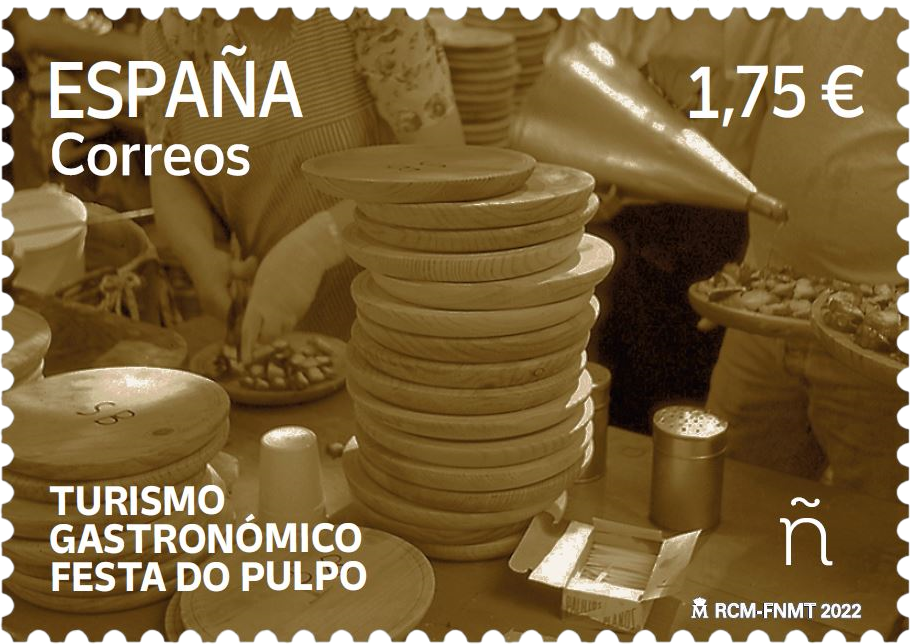 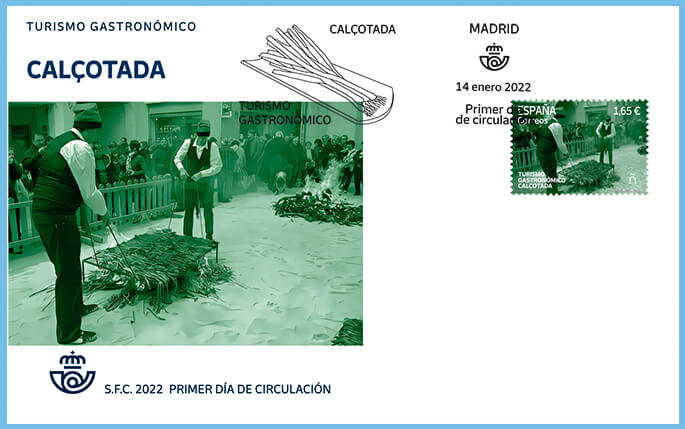 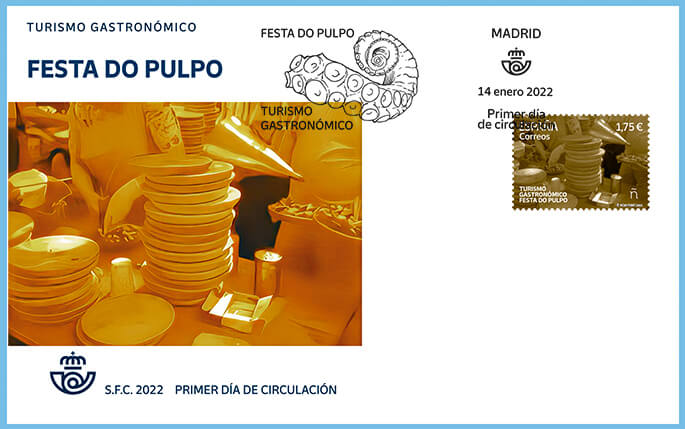 Spain occupies one of the first positions in terms of tourist destination worldwide.

One of the biggest attractions of our country is the excellent gastronomic offer that can be enjoyed in each of the corners of its geography.

One could speak of gastronomic tourism as an important indicator of the quality of the tourist offer of a place.

Gastronomy is the reflection of a people, its culture and its identity.

Spain is a world power in gastronomy with a wide representation in guides of the best restaurants, as well as for its high demand for national products, cheeses or wines, internationally.

Correos dedicates two stamps to tourism, in this case, to gastronomic tourism.

Calçotada. Calçot is a type of white and sweet scallion that is grilled with wood-fired embers. When the outer layer begins to scorch, they are removed from the fire and rolled on newspaper to conserve heat being served on an Arabic tile. It is accompanied by romesco sauce or salvitxada.

The last week of January is celebrated the Festa de Calçot de Valls, kicking off the season. This event invites the diner who visits this place, to also enjoy the historical and artistic heritage of the old town, its churches and monuments or the weekly market. The seal a moment of the roast.

Festa do pulpo. With more than 50 years, the Festa do Pulpo de O Carballiño, receives every year numerous visitors who want to know first-hand this pilgrimage, whose success, without a doubt, starts from one of the most exclusive and oldest gastronomic manifestations of Galicia, the tasting of the Octopus á Feira.

The stamp includes a close-up of the typical wooden dishes where the octopus is served, along with other important elements in its preparation. 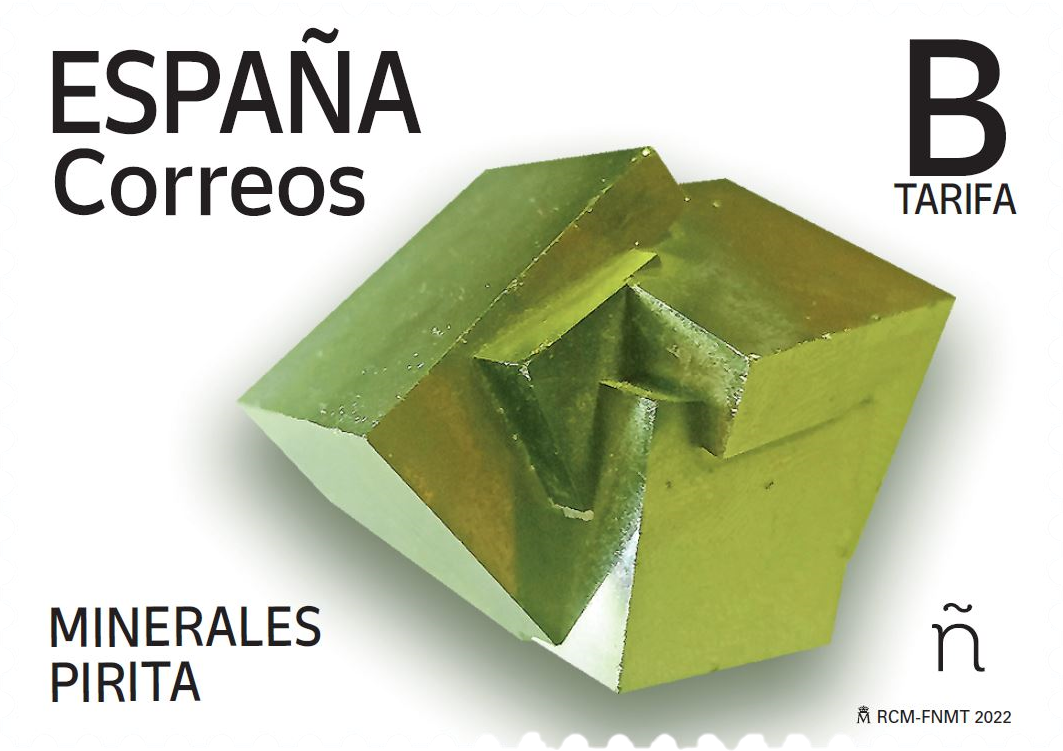 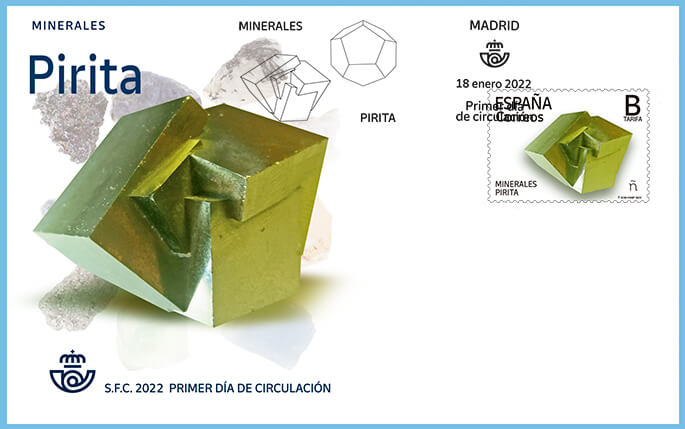 Known as “the gold of the poor” because of the resemblance to this precious mineral, it is within the category of sulfide minerals.

It is composed of sulfur and iron, fine-grained and solid and is practically opaque.

It is usually found in cubic pieces, although on some occasions, it can occur in octahedra or pyritohedra.

The name pyrite comes from the Greek pyros (fire), a name that refers to the ability of this mineral to generate sparks when hit with a metal. Pyrite is the most abundant sulfide on the planet and can form in a large number of environments. Its chemical formula is FeS2.

Pyrite is one of the most used minerals for mining and in the chemical industry, it is mainly used to create sulfuric acid that is obtained by heating the mineral at high temperatures, in the presence of oxygen, so that sulfur dioxide (SO2) emanates and then it is artificially transformed into sulfur trioxide (SO3) to which water is added to transform it into sulfuric acid.

Pyrite was polished by Native Americans in early times and used as mirrors. Today, it is also used as an ornamental stone, being also a very popular stone for amateur collectors.

In Spain, the greatest presence of pyrite can be found in the Cameros Basin, in the valleys of the Alhama and Linares rivers.

The stamp that Correos dedicates to this mineral includes an image of a piece of pyrite, with its peculiar golden color and its shape with linear cube-shaped cuts.