The French Southern and Antarctic Lands, usually referred to by the abbreviation TAAF for Terres australes et antarctiques françaises, has been an Overseas Territory (Territoire d’outre-mer) of France since 1955 but there are no permanently settled inhabitants. Approximately 150 (in the winter) to 310 (in the summer) persons are usually present in the TAAF at any time, but they are mainly made up of military personnel, officials, scientific researchers and support staff. The territory consists of Adélie Land in coastal Antarctica and several islands in the southern Indian Ocean: Îles Crozet, Archipel des Kerguelen, Îles Saint Paul et Amsterdam and a dispersed group of islands called Îles Éparses or the Scattered Islands. Before 6 August 1955, these were all dependencies of Madagascar. On July 5, 2019, the French Austral Lands and Seas were inscribed as a UNESCO World Heritage Site. 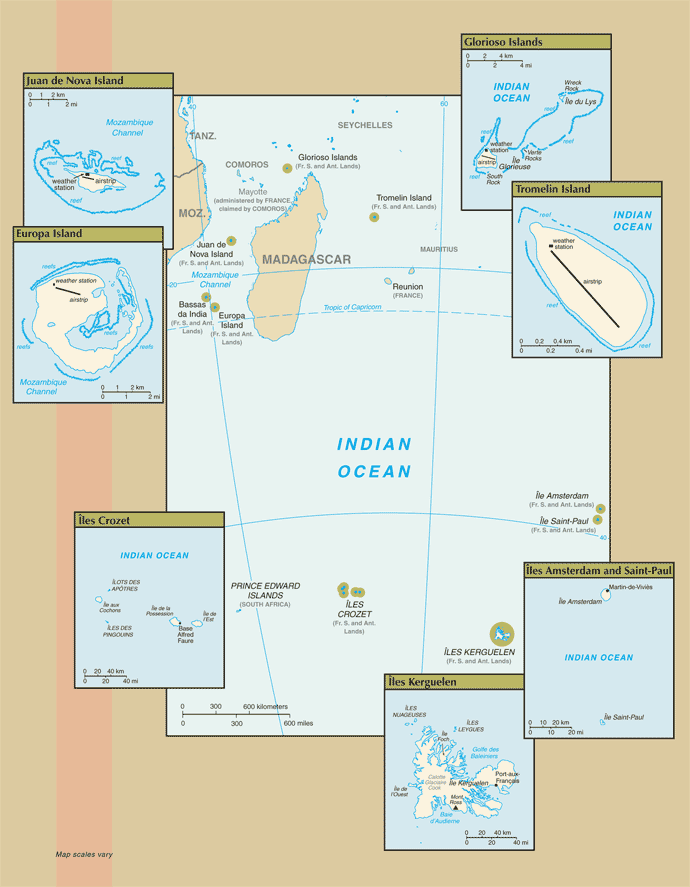 French stamps were used in the Kerguelen Islands from 1906 to 1926, routed via Madagascar, Cape Town and Durban in South Africa, and Bunbury, Australia. The TAAF used stamps of Madagascar from 1948 to 1955. On 26 October 1948, to commemorate the discovery of Adélie Land in 1840 by Jules Dumont d’Urville and publicize French claims to the region, a 100 franc Madagascar airmail stamp was overprinted TERRE ADÉLIE DUMONT D’URVILLE. On 6 August 1955, owing to Madagascar’s imminent independence, the TAAF was organized as a separate entity. Its first stamp, a 15 franc stamp of Madagascar overprinted TERRES AUSTRALES ET ANTARCTIQUES FRANÇAISES, was released on 28 October 1955 and the first non-overprinted stamps were released on 25 April 1956. The TAAF was administered from France until 2004. Since then it has been administered from the Indian Ocean island of Réunion, a French overseas department.

Since achieving the territorial status it has issued a number of stamps, many of which depict wildlife of the southern oceans and Antarctica or honor polar explorers and researchers. These are issued in two batches per year, one at the beginning of January and the other in November. La Poste announced the 2022 issues on 20 December 2021 with the following announcement:

On January 1st, the French Southern and Antarctic Territories will offer 14 new philatelic programs that will illustrate, in miniature, all the historical, technical, mineral and environmental richness of these French territories at the end of the world.  The year 2022 will be marked by the celebration of the 250th anniversary of the discovery of the Crozet and Kerguelen Archipelagos, historic events that are not forgotten in this new philatelic program.

On December 4, 2021, during a mission to the Vlaming Point area of Amsterdam Island, environmental officers in charge of managing the French Southern Territories National Nature Reserve discovered what is likely the camp of the castaways of the Meridian, a British ship stranded in 1853.

Base Étoilée or Moonrise on the East Island (Crozet) 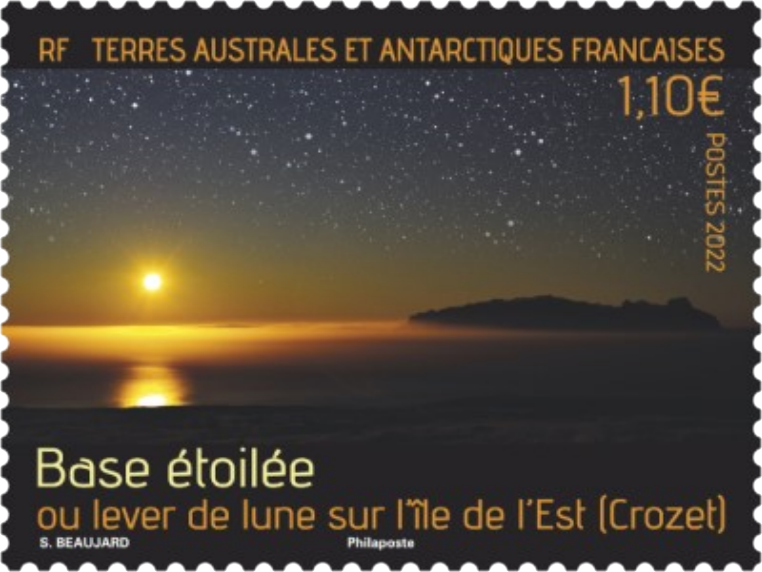 The East Island is a landmark for all winterers at the Alfred-Faure base in Crozet. The island has the highest cliff in the world, that of Lesquin, with 1012 m in height.

Robots at the Service of Science 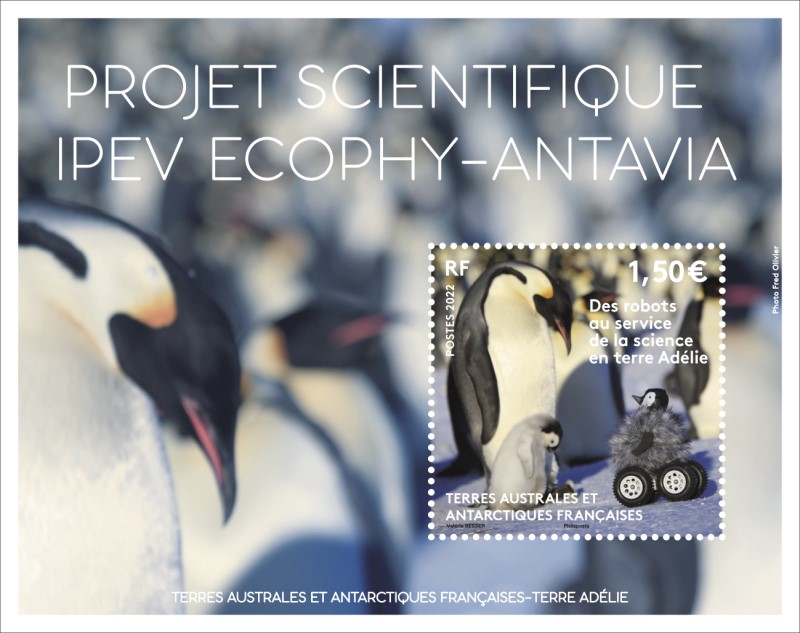 To study a colony of emperor penguins in Adélie land, Yvon Le Maho, a penguin specialist, and his team recently used a robot… looking like a baby penguin! 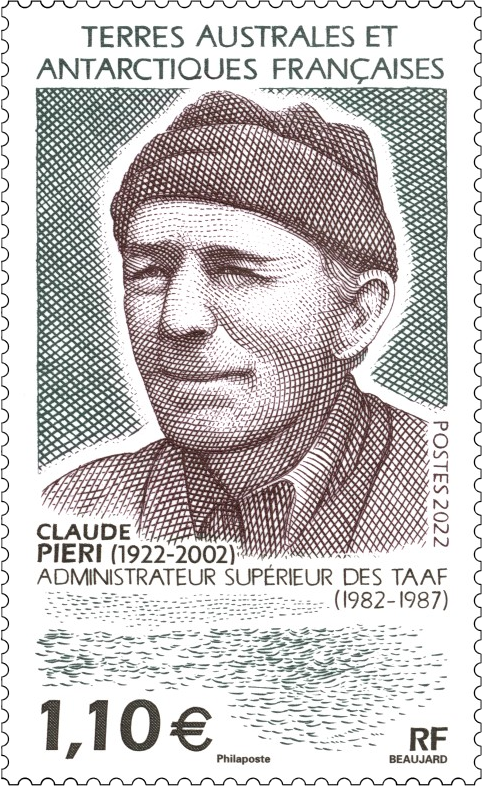 Born on January 21, 1922 in Corte (Corsica), Claude Pieri, vice-admiral of the squadron, commanded the French submarine forces and the strategic oceanic force (FOST), which include all the nuclear-powered missile submarines of the Le Redoutabletype. In 1982, he became senior administrator of the TAAF. He died on June 4, 2002. 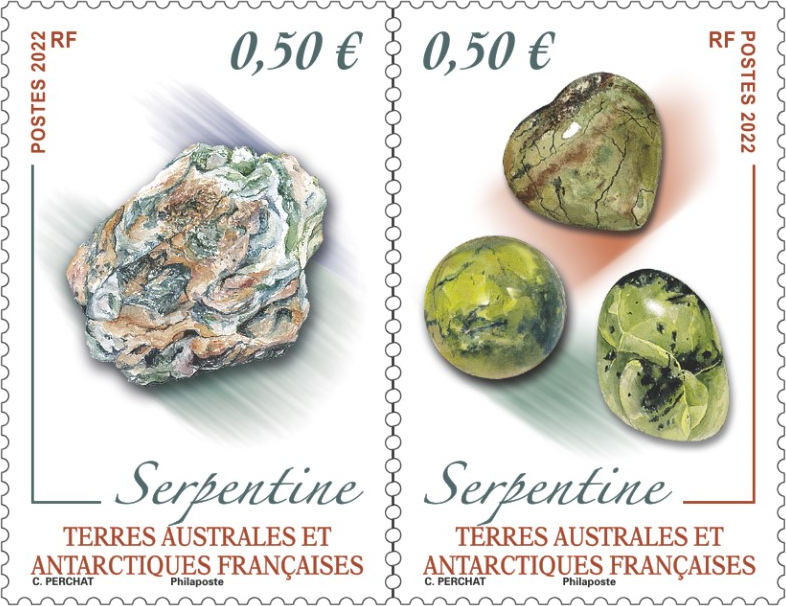 Serpentine is a water-rich magnesian silicate, which may also contain iron, but in very small amounts.

The Seabed of the TAAF: The Îles Éparses 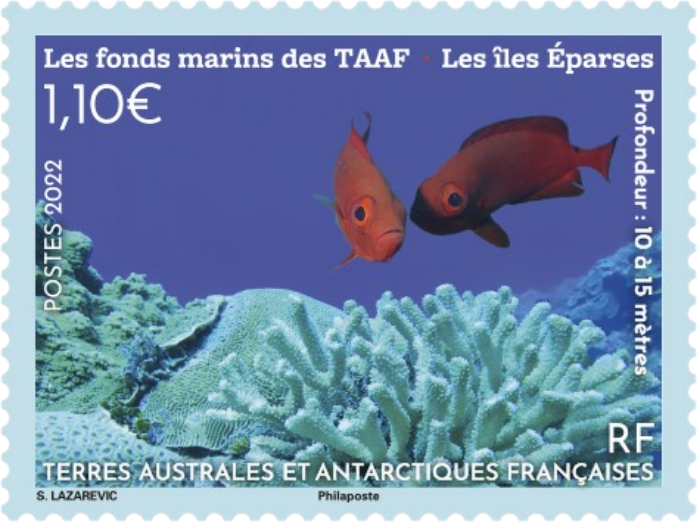 While the cumulative land area of the Scattered Islands does not exceed 43 km², all of their waters under French jurisdiction represent a total of 640,400km2 (about 6% of the French maritime territory). The theme of the seabed of the TAAF will be the subject of a multi-year series. 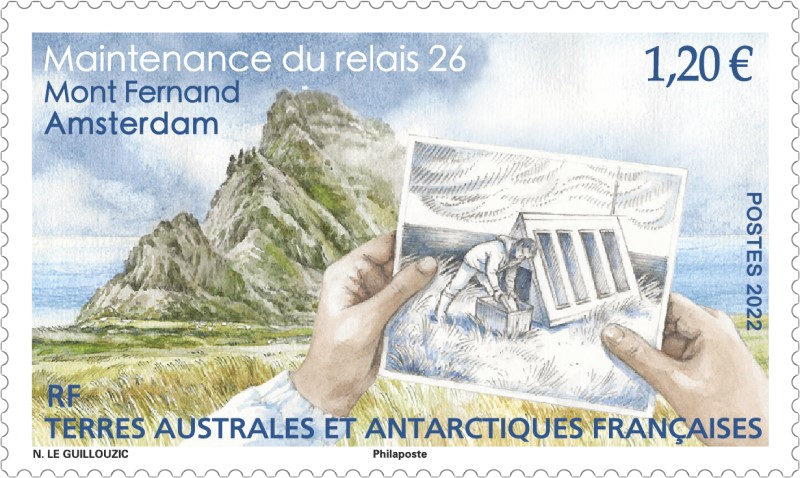 In Amsterdam, as in all TAAF districts, radio links make it possible to secure the movements of mission members, especially during scientists’ outings. To maintain the radio link between the Martin-de-Viviès base and the teams deployed in the field, the TAAF constantly maintain relays 26 and 27. 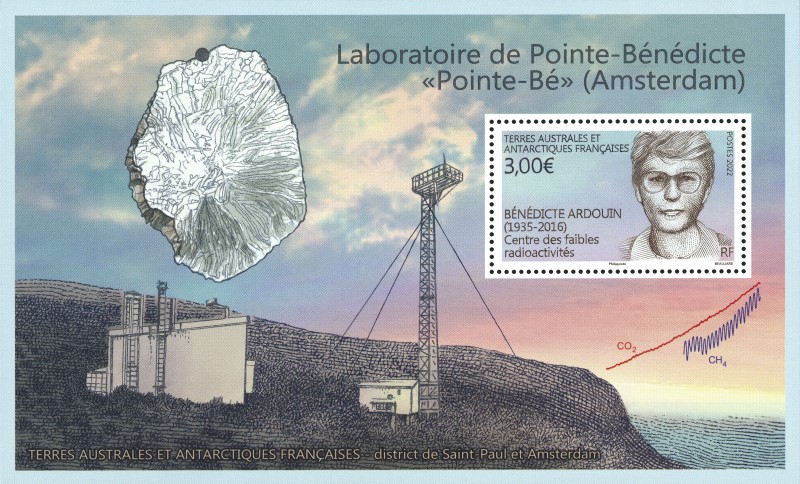 When Gérard Lambert created in 1980 the CO2 study program, then the measuring station on Amsterdam Island, he entrusted Bénédicte Ardouin with the organization of the network, the collection and archiving of measurements. The Pointe Bénédicte site (Pointe Bé) is home to one of the most renowned greenhouse gas measurement stations in the world. 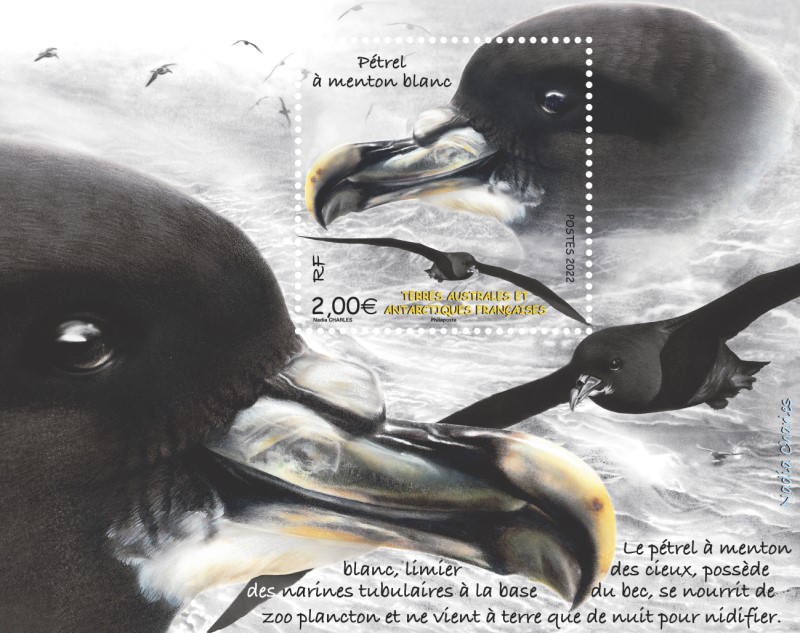 The White-chinned Petrel (Procellaria aequinoctialis) is one of the many species of seabirds found on all islands of the Southern Ocean, from subtropical to Antarctic waters. It has a wingspan of 1.40 m with an average weight of 1.3 kg and is characterized by a white chin at the base of the beak. 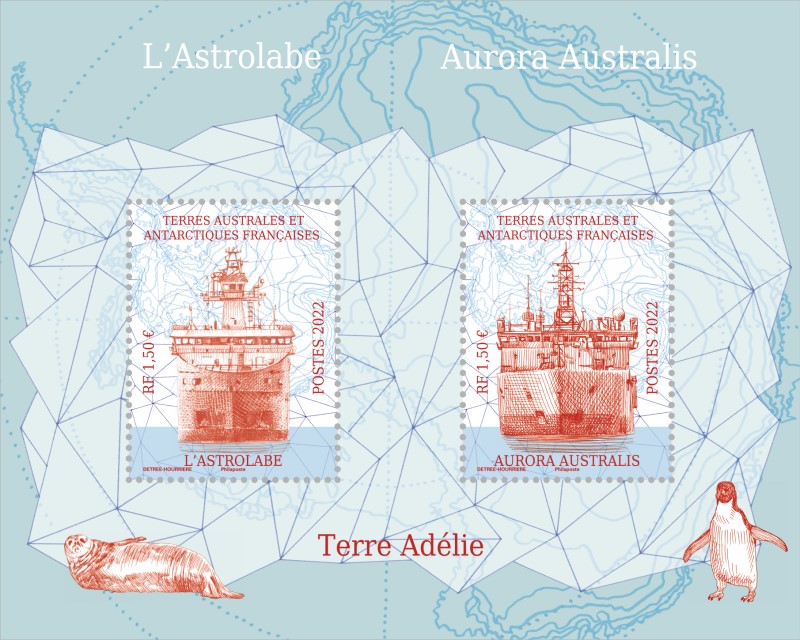 The Astrolabe is an icebreaker built in the framework of a partnership between, on the one hand, the TAAF and the French Polar Institute (IPEV), and on the other hand the Ministry of Defense (Marine nationale (MN)). For 31 years, the Aurora Australis has been the main link between Australia and its bases in the Deep South: the sub-Antarctic island of Macquarie and three scientific stations in Antarctica. It was replaced in 2020 by the RSV Nuyina.

The Discovery of the Crozet Archipelago 250th Anniversary 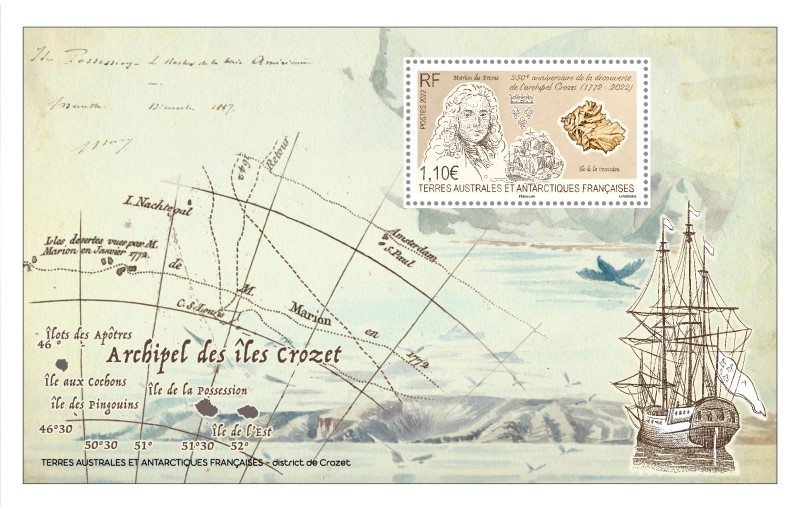 The Crozet Islands were discovered by the expedition of Marc Joseph Marion du Fresne, who landed his second, Julien Crozet, on Possession Island on January 24, 1772. Crozet took possession of the archipelago in the name of King Louis XV.

The Discovery of the Kerguelen Archipelago 250th Anniversary 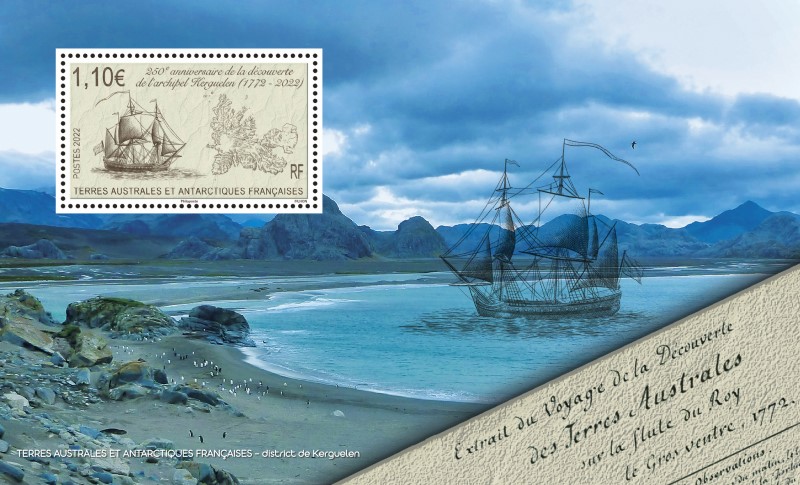 The archipelago was discovered on February 12, 1772 by the French navigator Yves Joseph de Kerguelen de Trémarec, who left the Island of France (now Mauritius) with the flute La Fortune and the gabarre le Gros Ventre. It was Charles du Boisguehenneuc, second in command of the Gros Ventre commanded by Louis Aleno de Saint-Aloüarn, who managed to reach the shore and took possession of the territory in the name of Louis XV on 13 February. 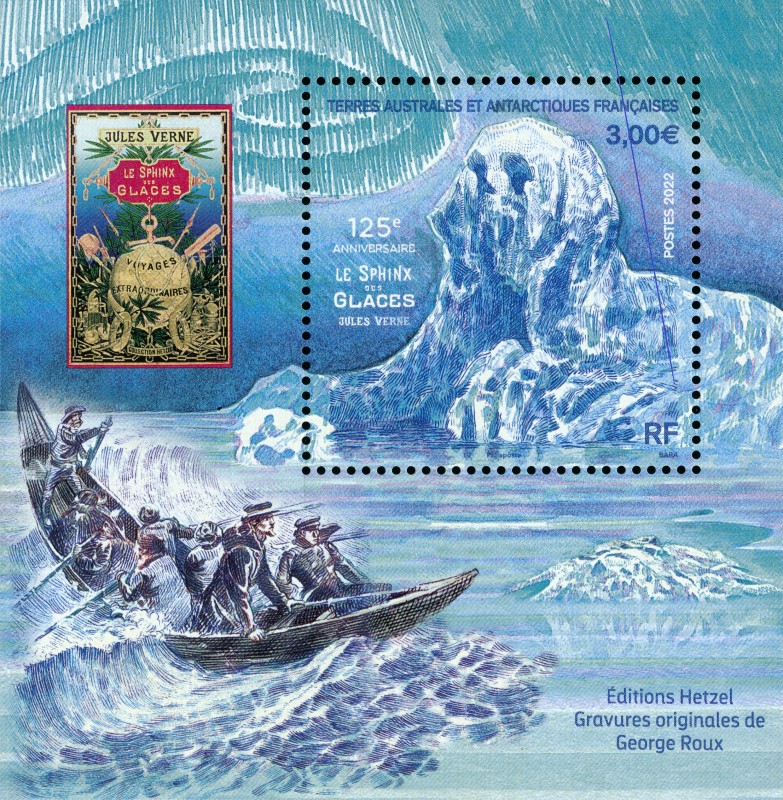 The Ice Sphinx is an 1897 fantasy novel by Jules Verne, an imaginary sequel to Edgar Allan Poe’s novel The Adventures of Arthur Gordon Pym. In this book, the American mineralogist Jeorling, passing through the Kerguelen Islands, seeks to return to his native Connecticut. 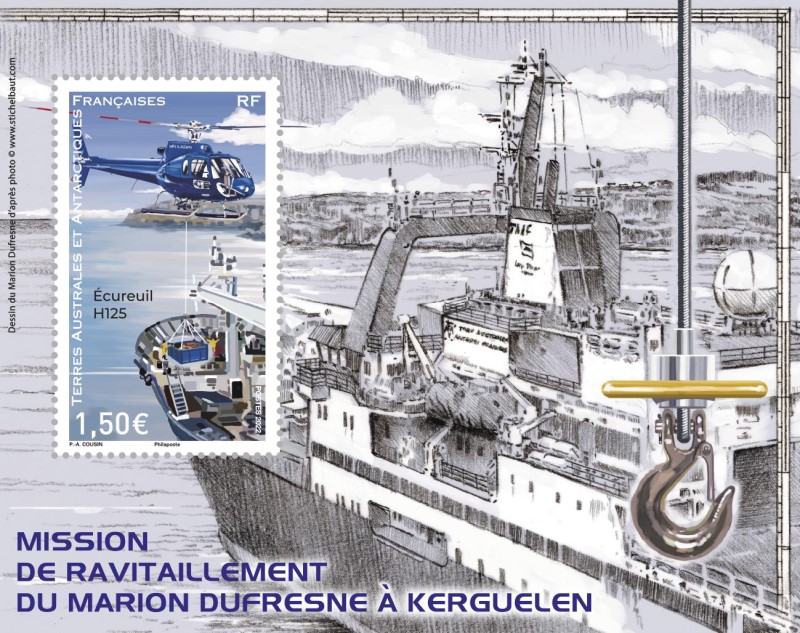 The operational combination of the Marion Dufresne and the helicopter allows the replacement of personnel and the essential refueling of bases in the austral districts. In 2020, 2,284 tons of equipment were transported.