One of my favorite topicals to collect, ever since the early 1970s, has been Christmas stamps (and seals). Over the past several years, I have compiled comprehensive lists of the various holiday-themed stamps issued around the world at this time of year. It has always been my great joy for November and December to review each and every one of these stamps and has helped to boost my holiday spirit, something that can be difficult to attain living in a very hot climate in a predominately Buddhist nation.

For a number of reasons, I have not been able to put together such a checklist for 2021. Fear not because another site is doing the same sort of thing as I have been in regards to annual New Issues and even has a very useful pictorial list of the year’s Christmas stamps so I do not feel the need for duplication. Bitter Grounds Magazine has been around for a few years but has greatly increased its new stamps coverage over the past year and a half. Have a look around and especially check out the Christmas stamps listing (which is duplicated at the bottom of this post in a screen capture).

Because of the comprehensiveness of the Bitter Grounds list, I have decided to simply include my personal favorites out of the 2021 Christmas and New Year topical stamps. While I have avidly collected this theme for nearly 50 years, I find myself having fewer “wow” moments when viewing new designs.  There is a real sameness of the designs overall, you might call these stamps “comfortable” as they do not break new ground. But there are a few that I particularly like.

I was struck at how similar the U.S. and Canadian Santa portraits are this year (or, is that just me?) and the trio of Canada’s secular stamps are high on my list. The United States’ stamp showing Santa’s boots dangling from the hearth is one that makes me laugh whenever I see it. 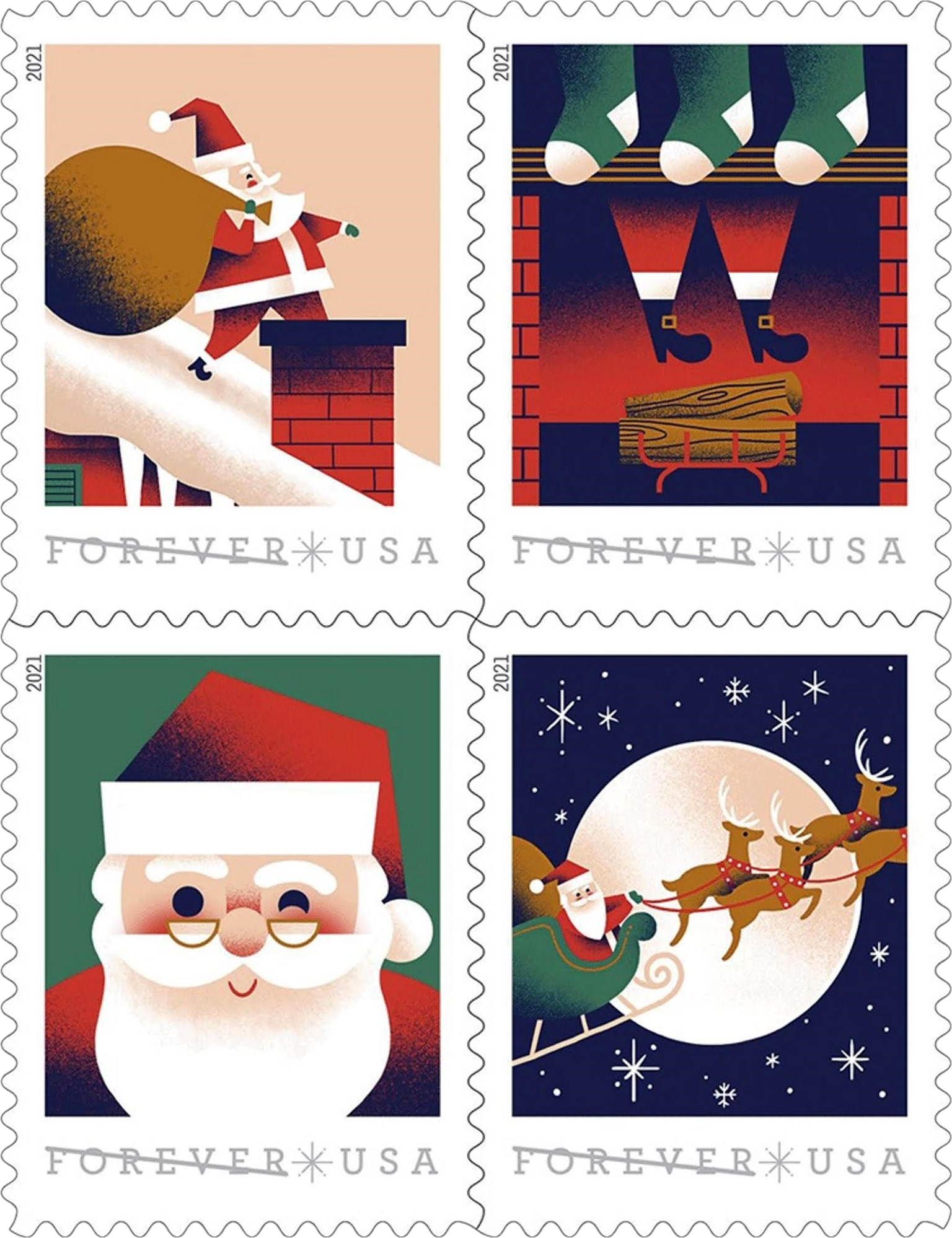 I am a sucker for unusual stamps and PostAG from Austria turns out a couple each year that turn heads. 2020’s offering marking the COVID-19 social distancing precautions garnered a lot of attention as it was printed on three-ply toilet paper; this year’s offering was mask-shaped. This seems to have overshadowed one of the country’s several Christmas stamps that was printed on fabric shaped as a Christmas mitten. I love it. 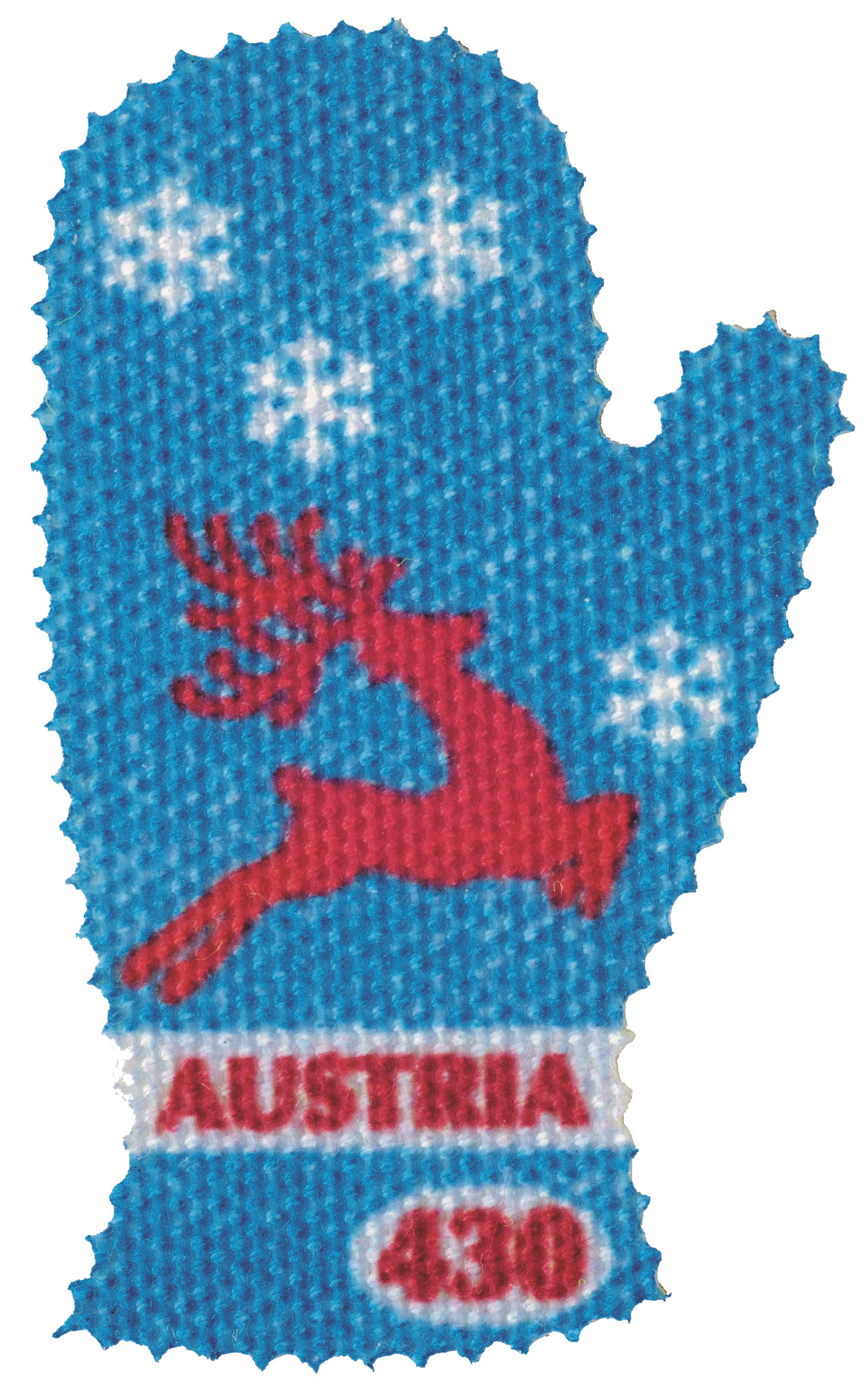 I also quite like the stamps from Åland, Alderney, Great Britain, and Malta as shown below…. 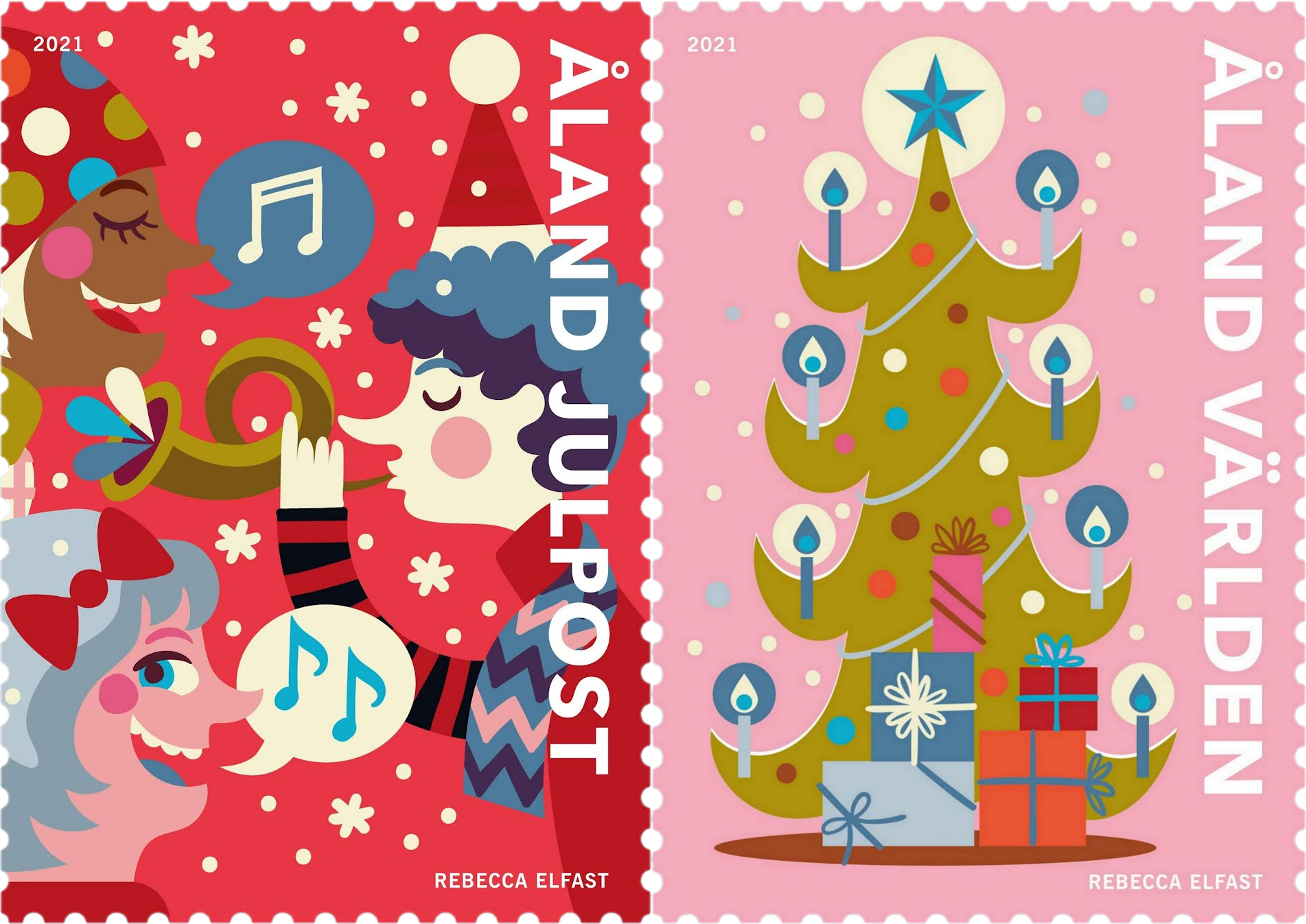 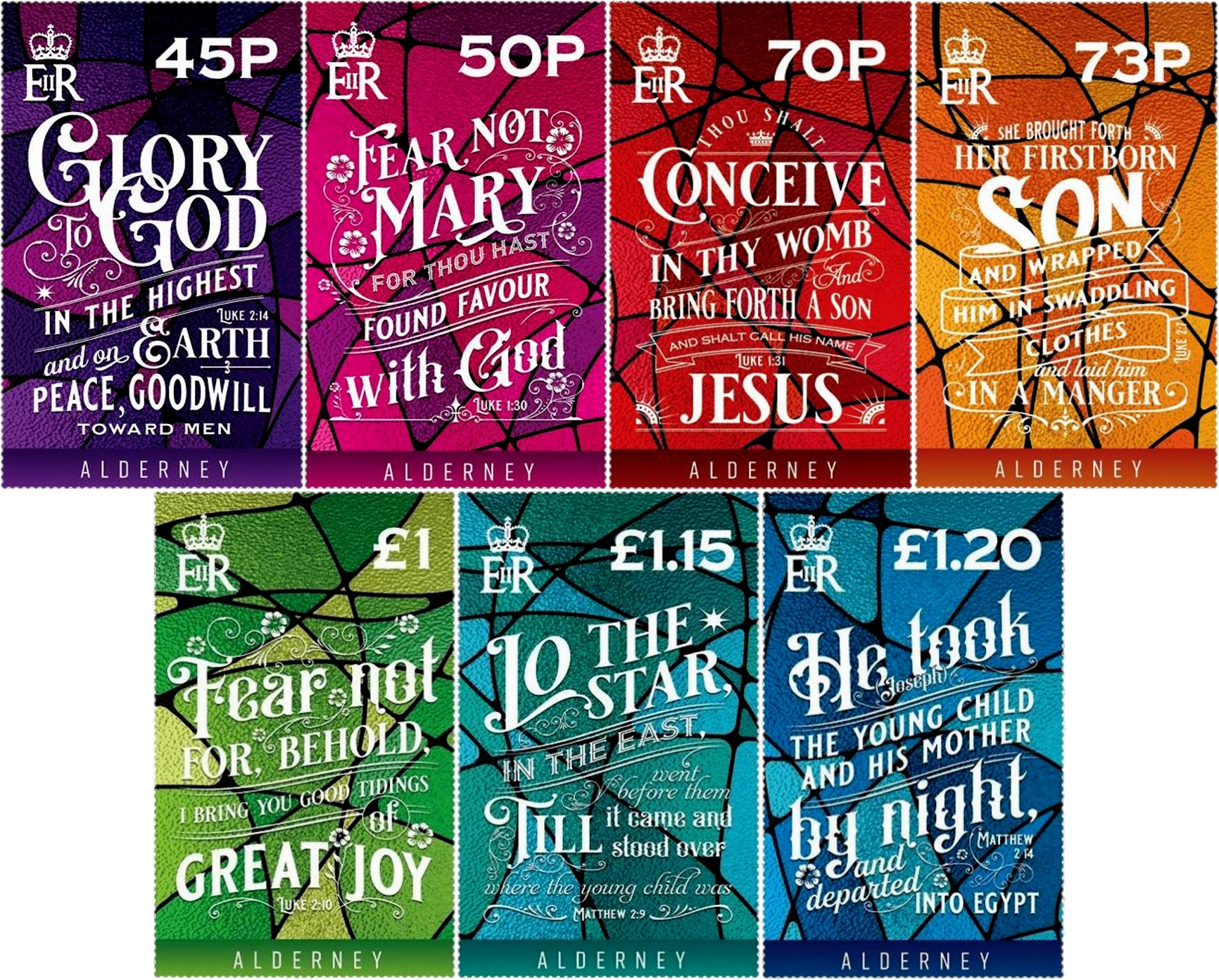 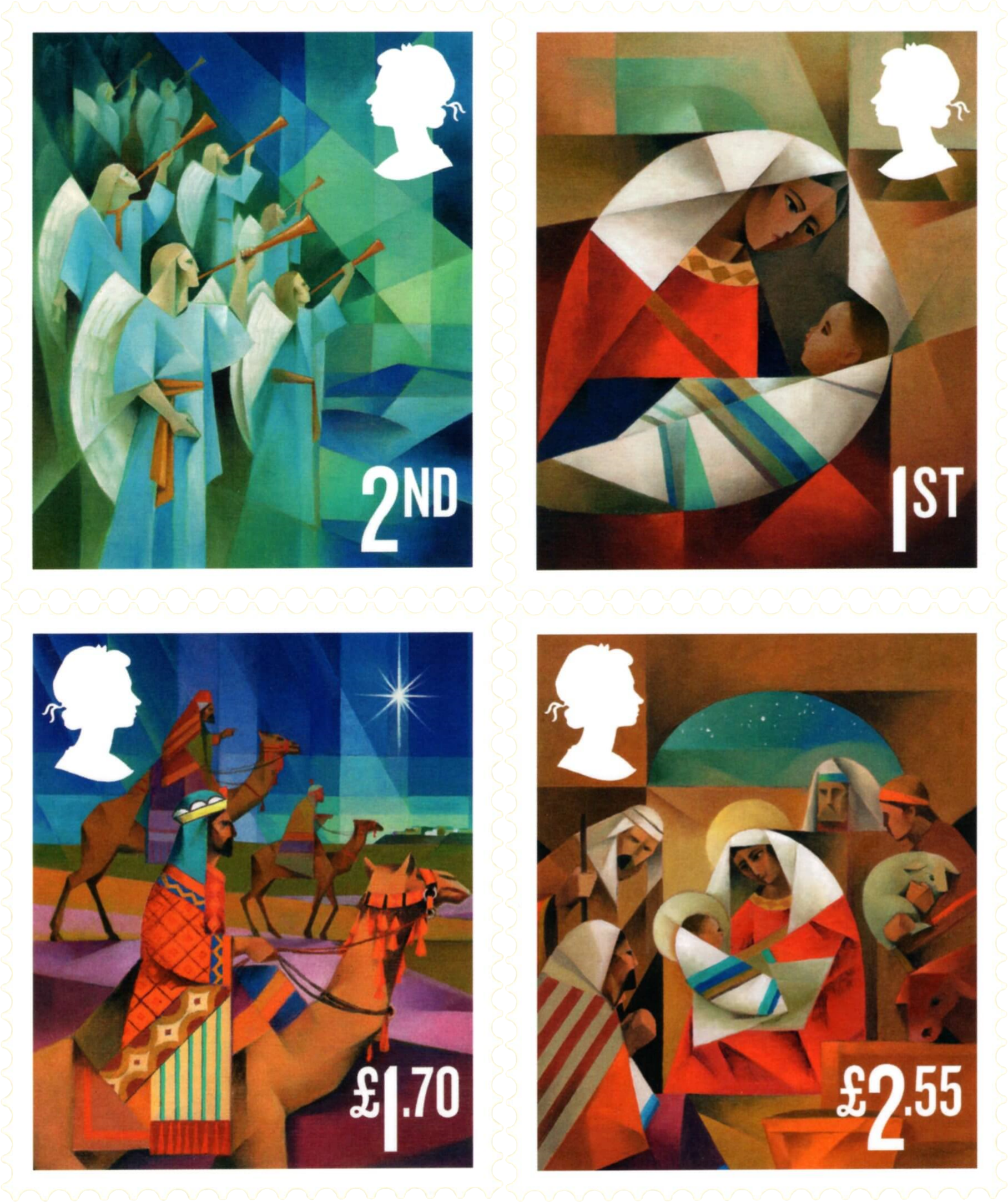 The Netherlands set of December booklet stamps (which, oddly, Catspaw doesn’t include on the Bitter Grounds list) is quite pleasant with its cut-paper designs. I particularly like the one featuring a reindeer tangled in Christmas lights. 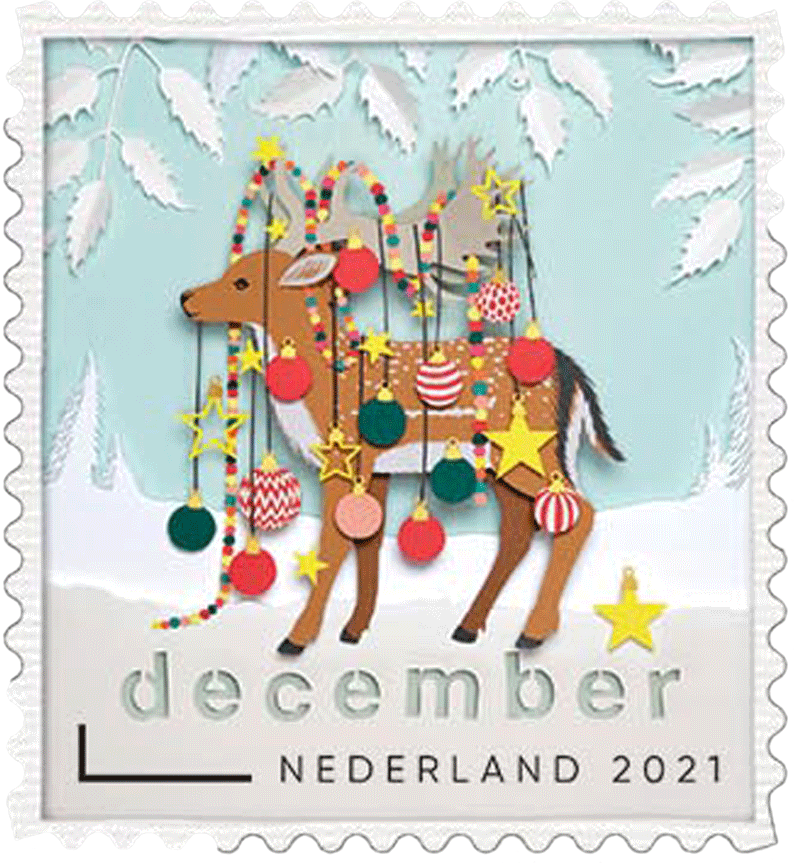 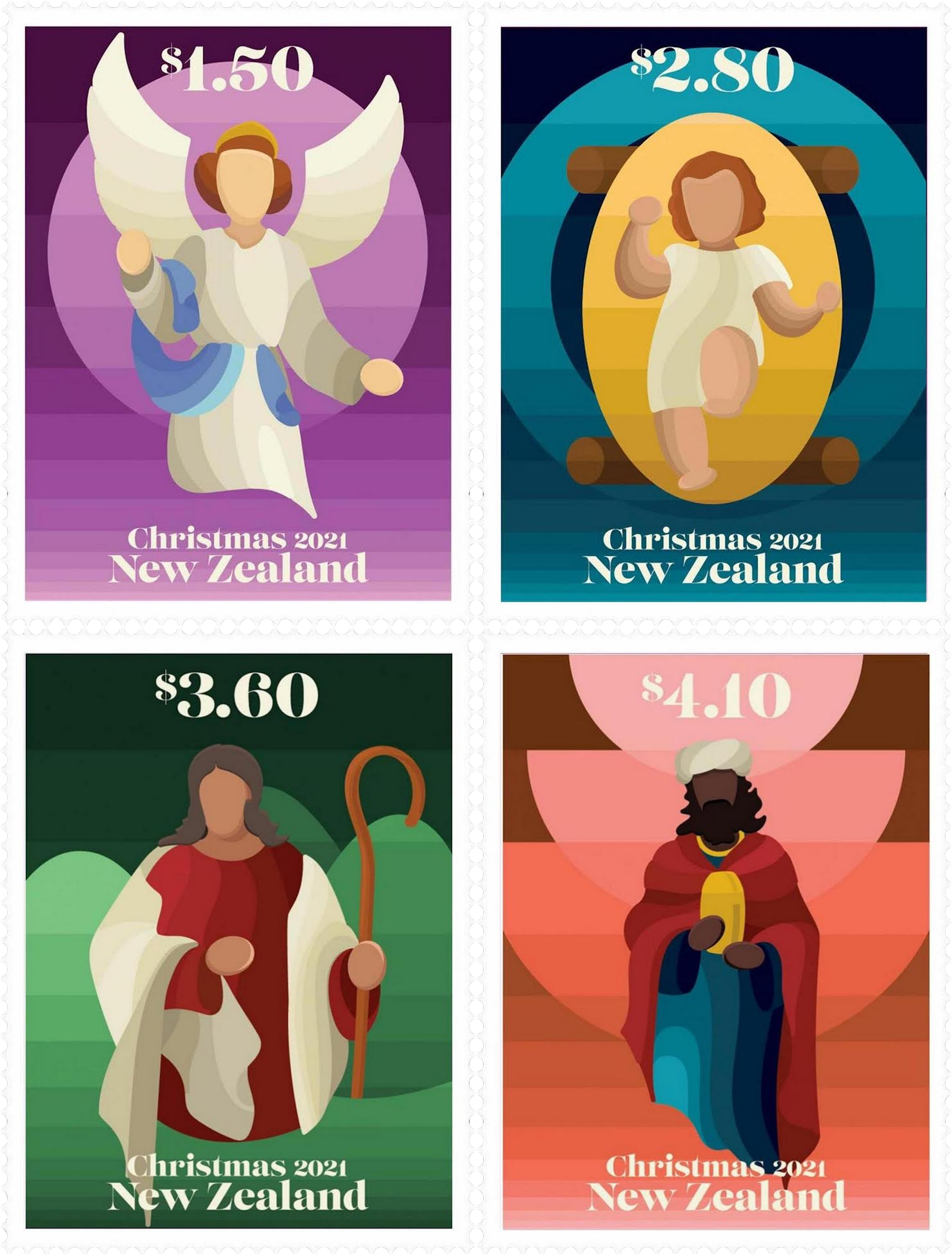 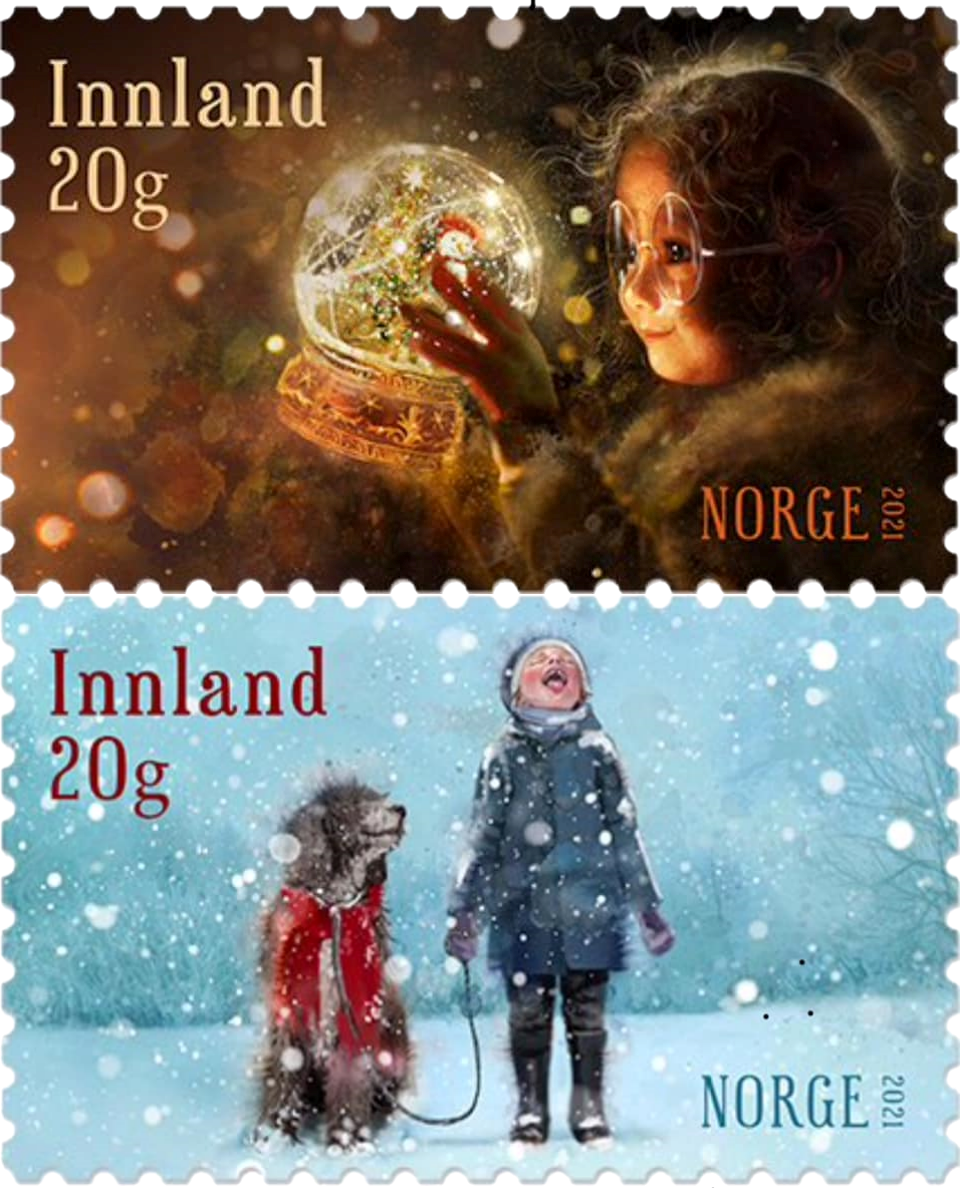 I am a fan of Clement Moore’s A Visit From St. Nicholas (and have done dramatic readings of the poem at school Christmas assemblies) so I was pleased to see this year’s set from Jersey.

I think my second favorite is the pair of Christmas stamps issued by Greenland, particularly the value depicting the woman with traditional tattoos. 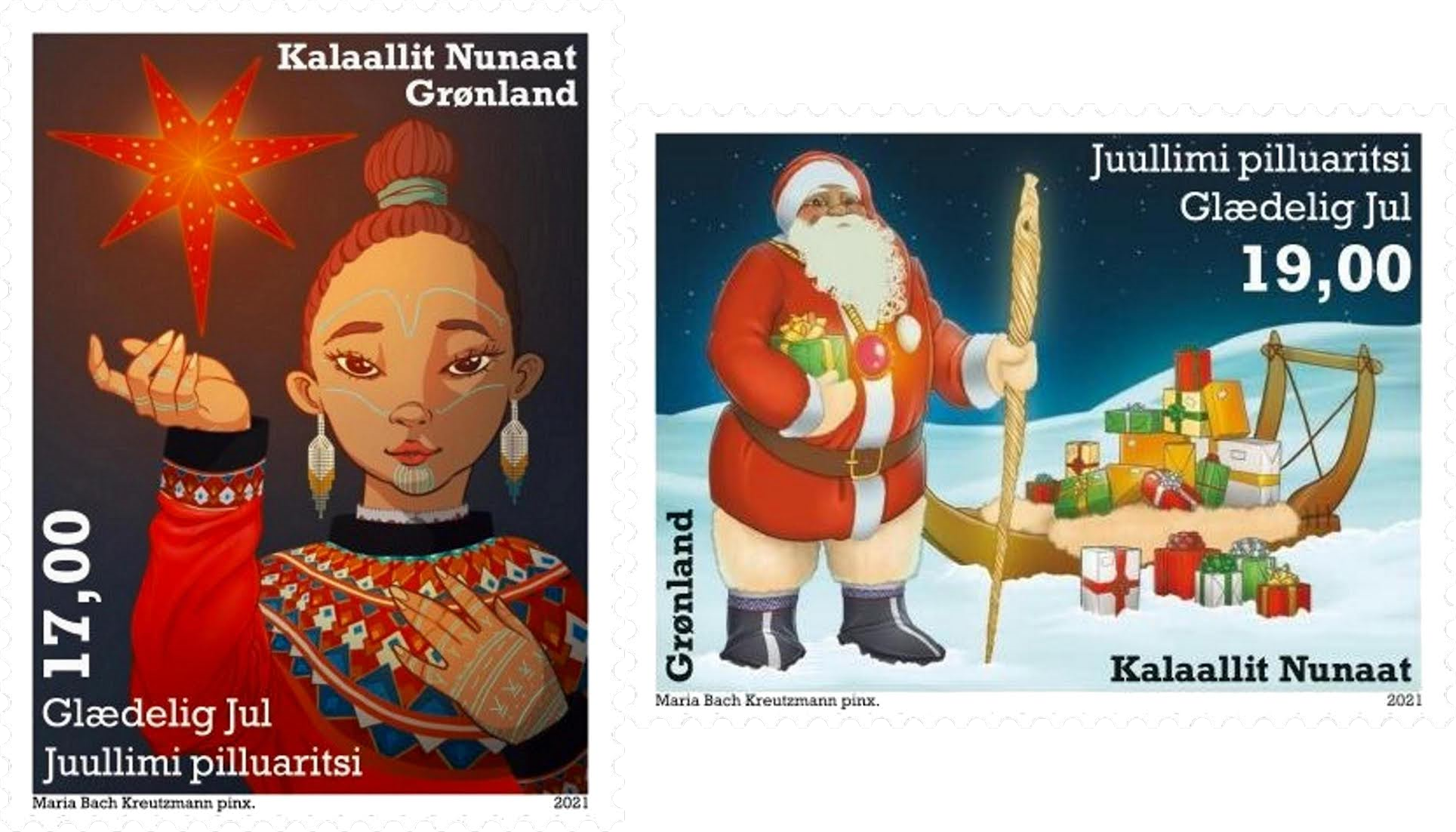 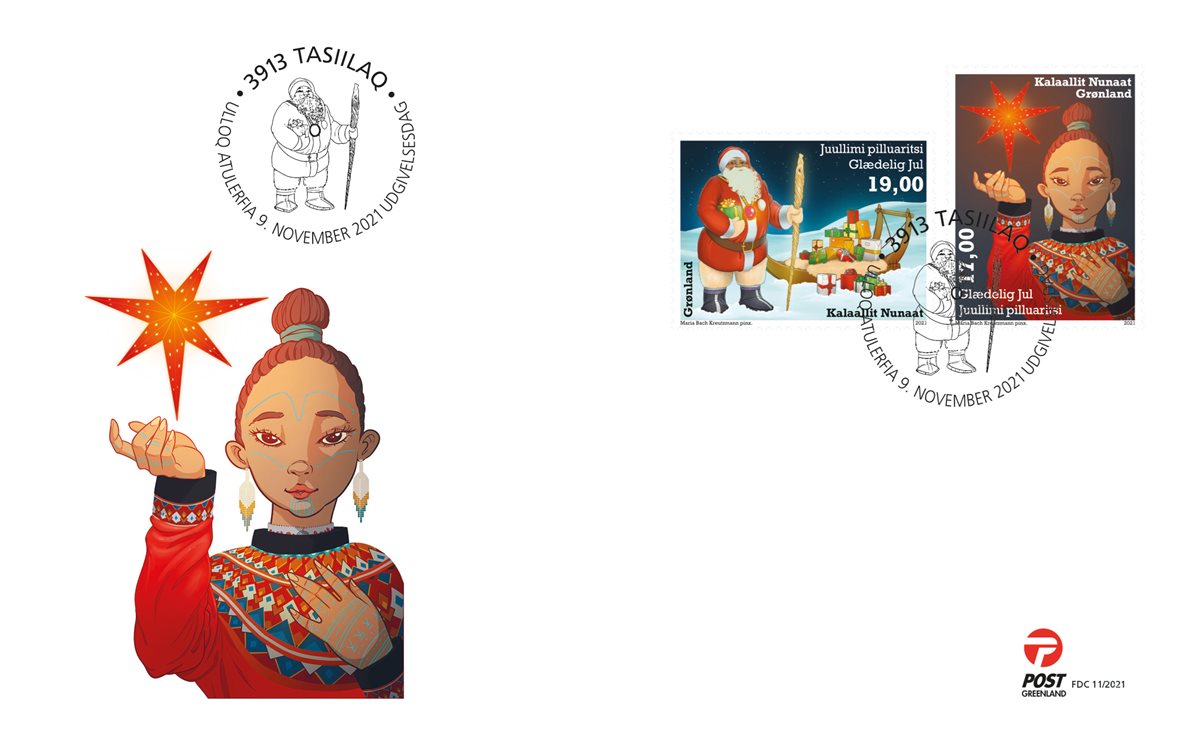 Finally, my favorite set of 2021 Christmas stamps is that issued by Liechtenstein on 15 November.  These were designed by Sereina Hatt and printed using offset lithography in 2-color Pantone with gold hot-foil stamping. They just “pop”. The description from the Philately Liechtenstein bulletin follows:

The traditional and popular Christmas stamps are presented in oriental style this year, which is reflected in the choice of colours and detailing in gold.  The four self-adhesive square special stamps are available in sheets of 20 or individually.

With her choice of motifs, designer Sereina Hatt establishes a connection to the Christmas story of Christianity.  On the stamp “The Guiding Star” (face value: CHF 0.85), the star the pointed the way to Bethlehem for the Three Wise Men takes center stage.  “The Shepherd” (face value: CHF 1.00), symbolically represented by a sheep, refers to the shepherd who, after an angel proclaimed the birth of Jesus, also set out to see the Son of God lying in a manger.

The “Holy Spirit” (face value: CHF 1.50), who had come upon Mary as the Spirit of God and made her conceive her son nine months earlier, appears in the form of a dove like in the Bible. A candle flanked by a plant represents “The Gifts” (face value: CHF 2.00), which the Wise Men from the East offered to the Saviour. 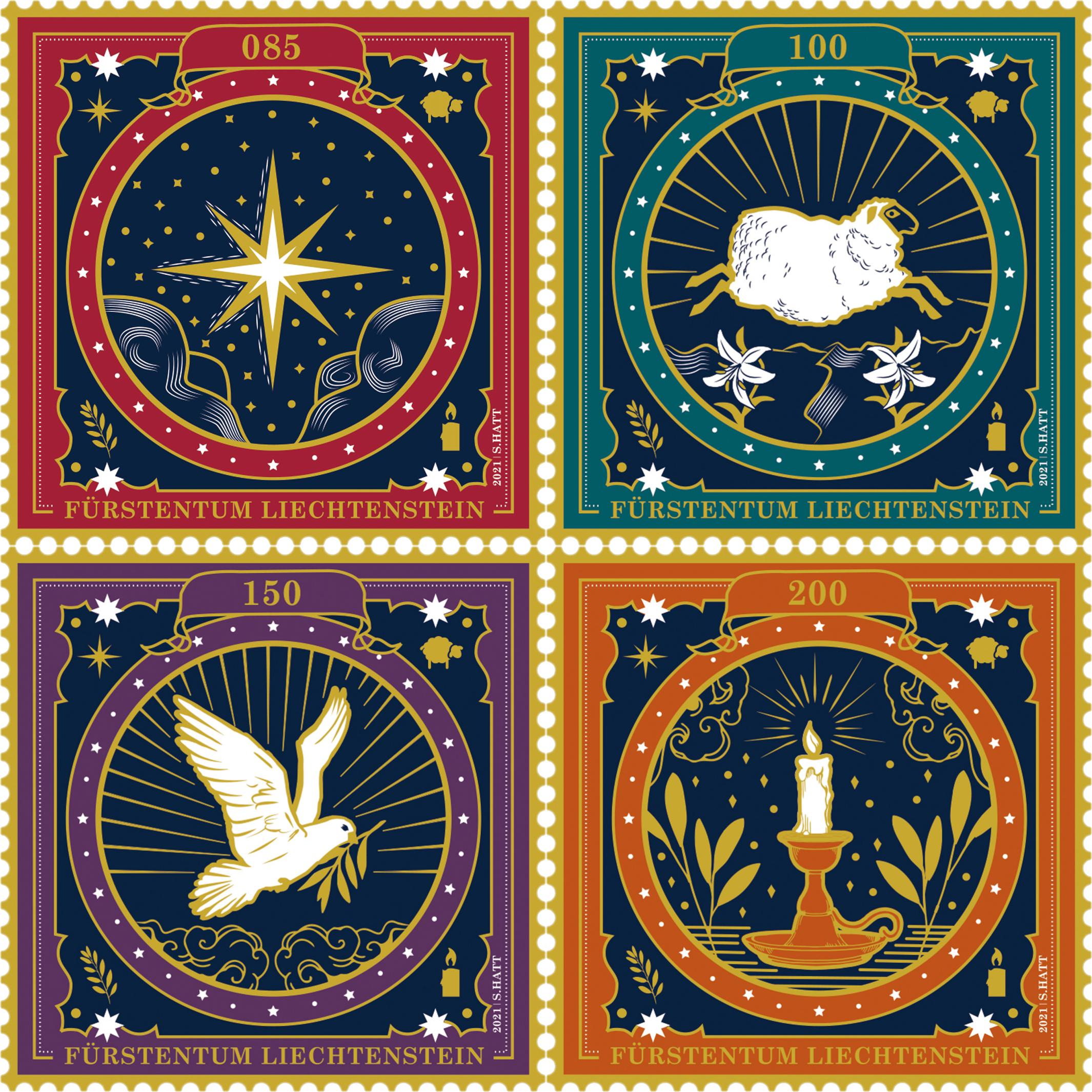 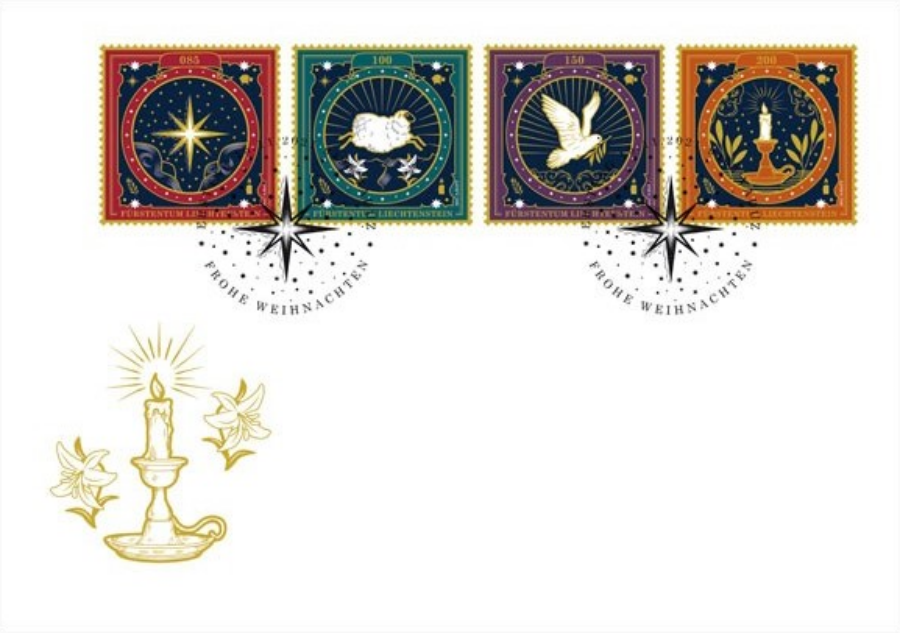 There are, of course, other Christmas stamps issued in 2021 that I also like but this is my short list. Which are your favorites?  Have you seen any others that are not on the Bitter Grounds list? Please let me know in the comments. 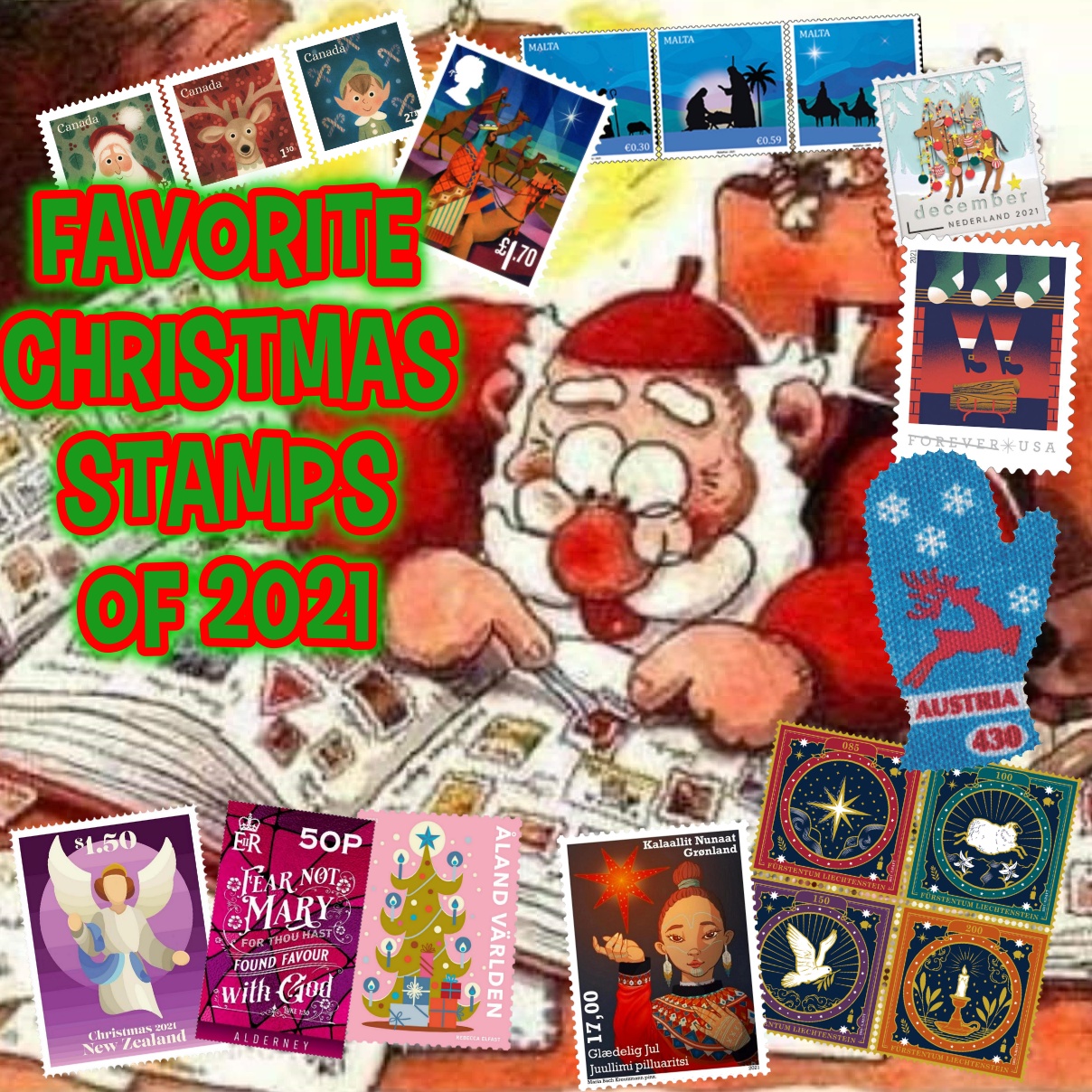