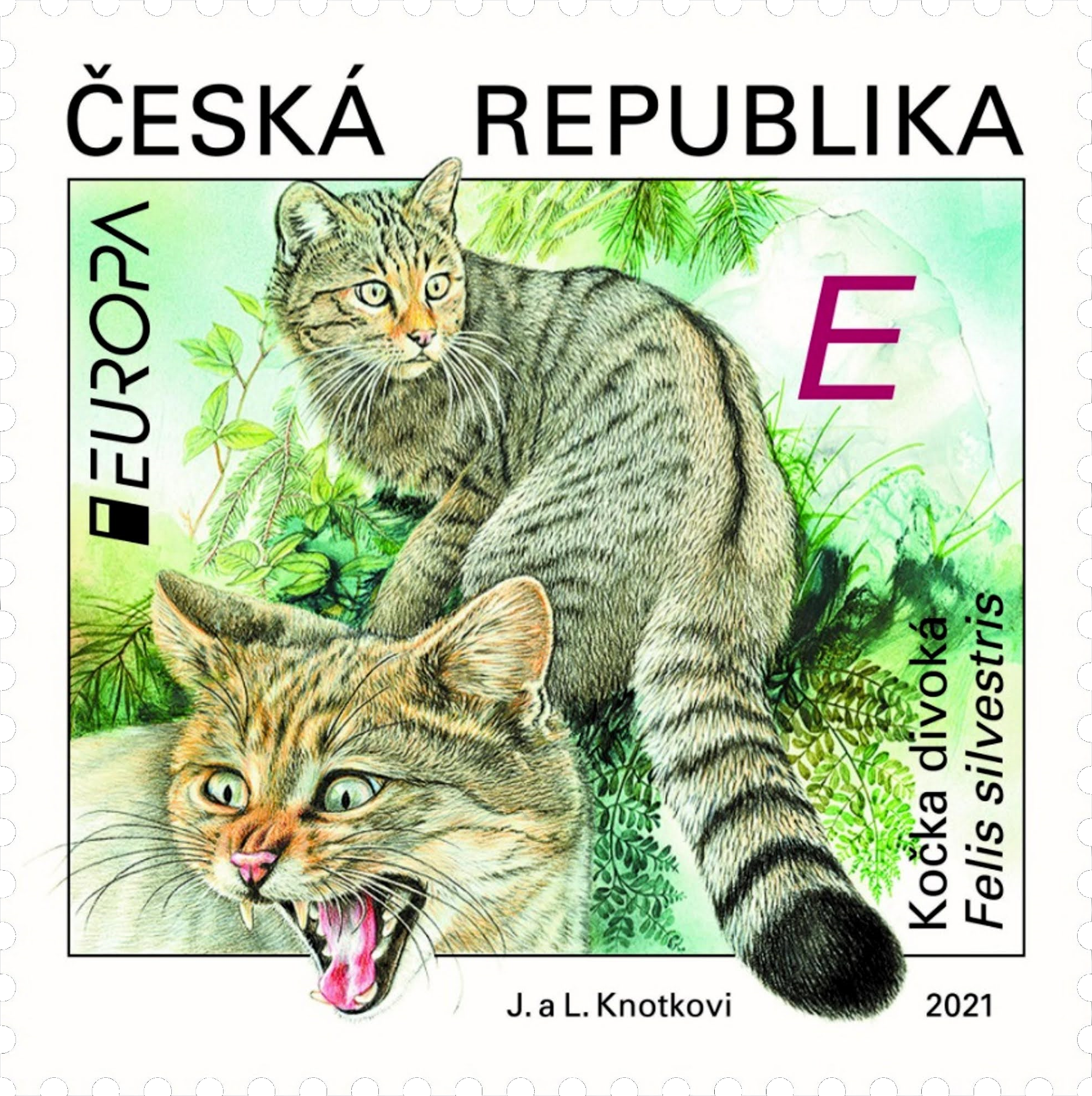 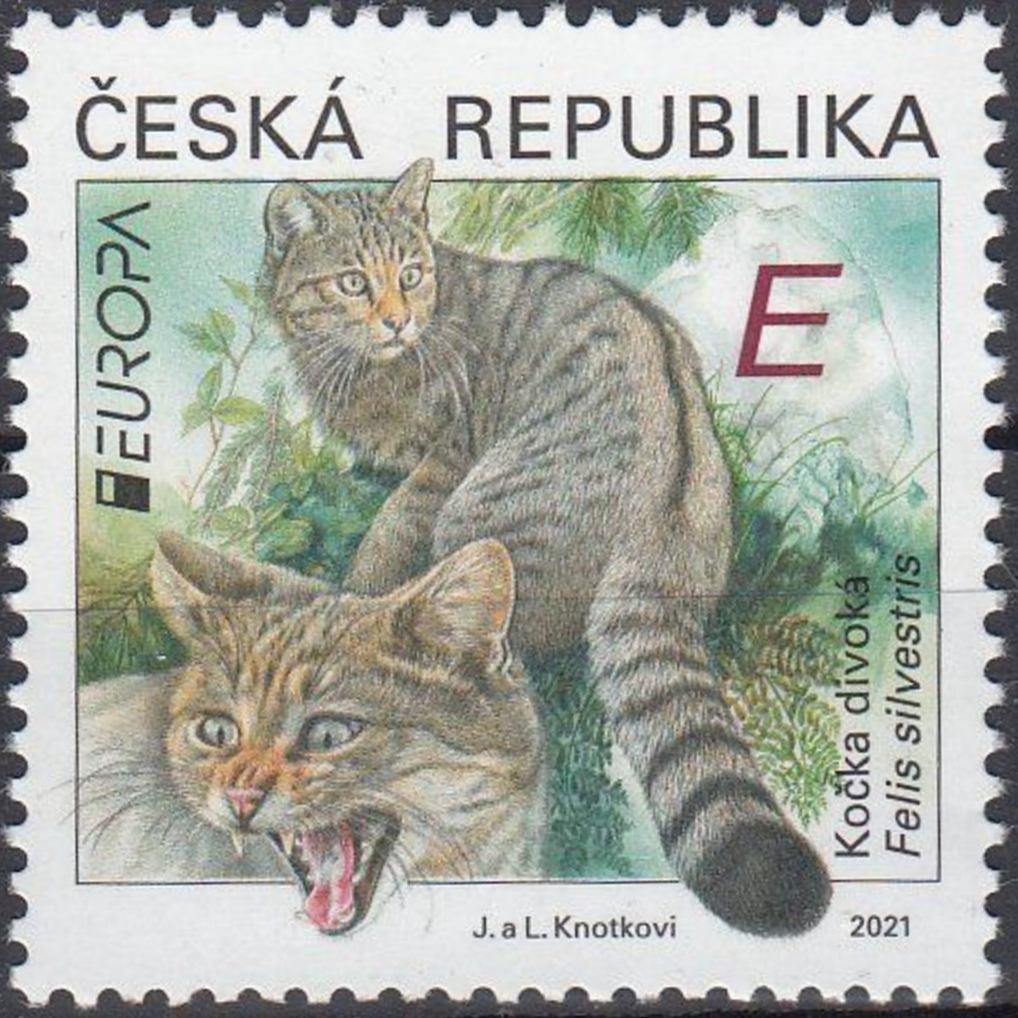 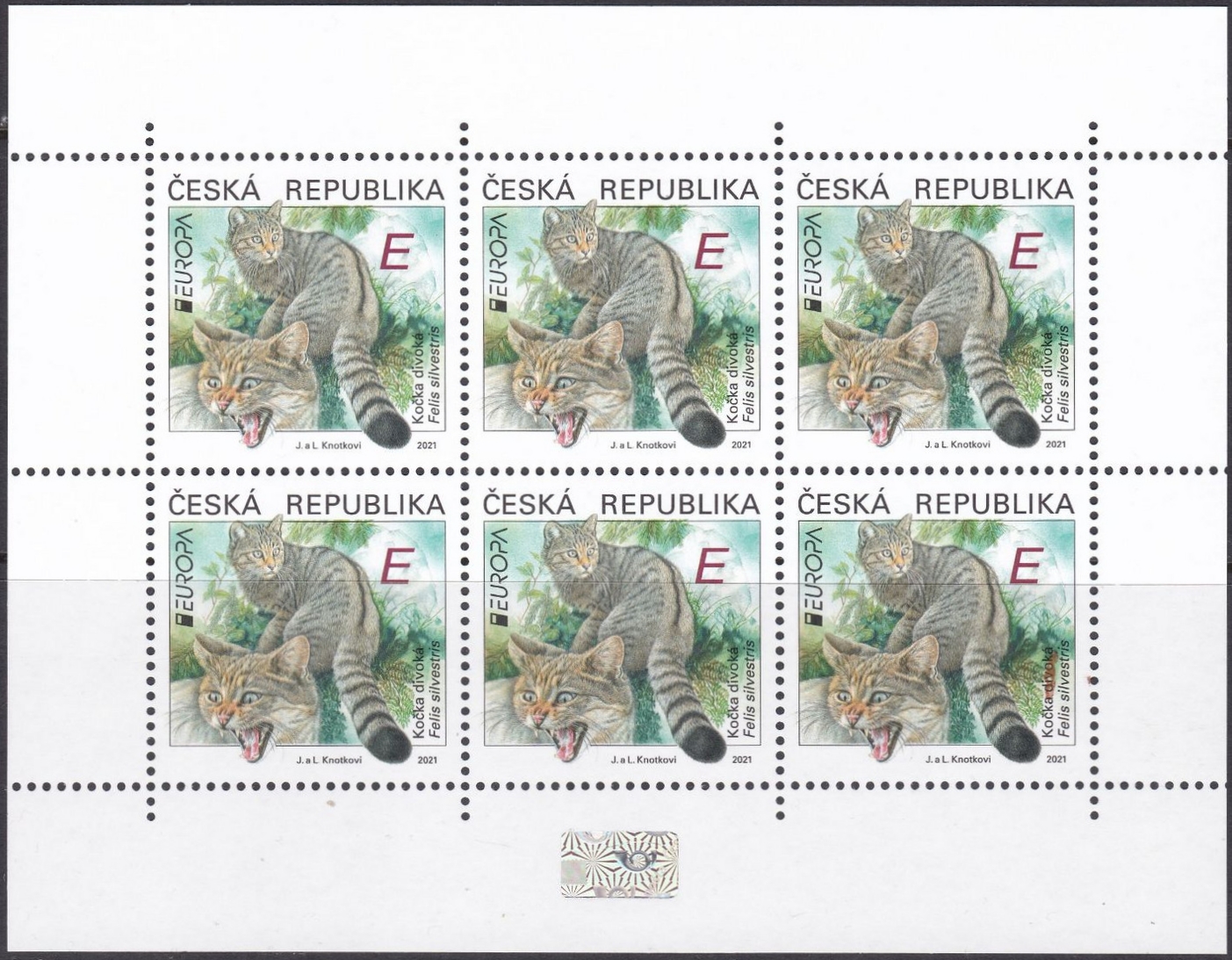 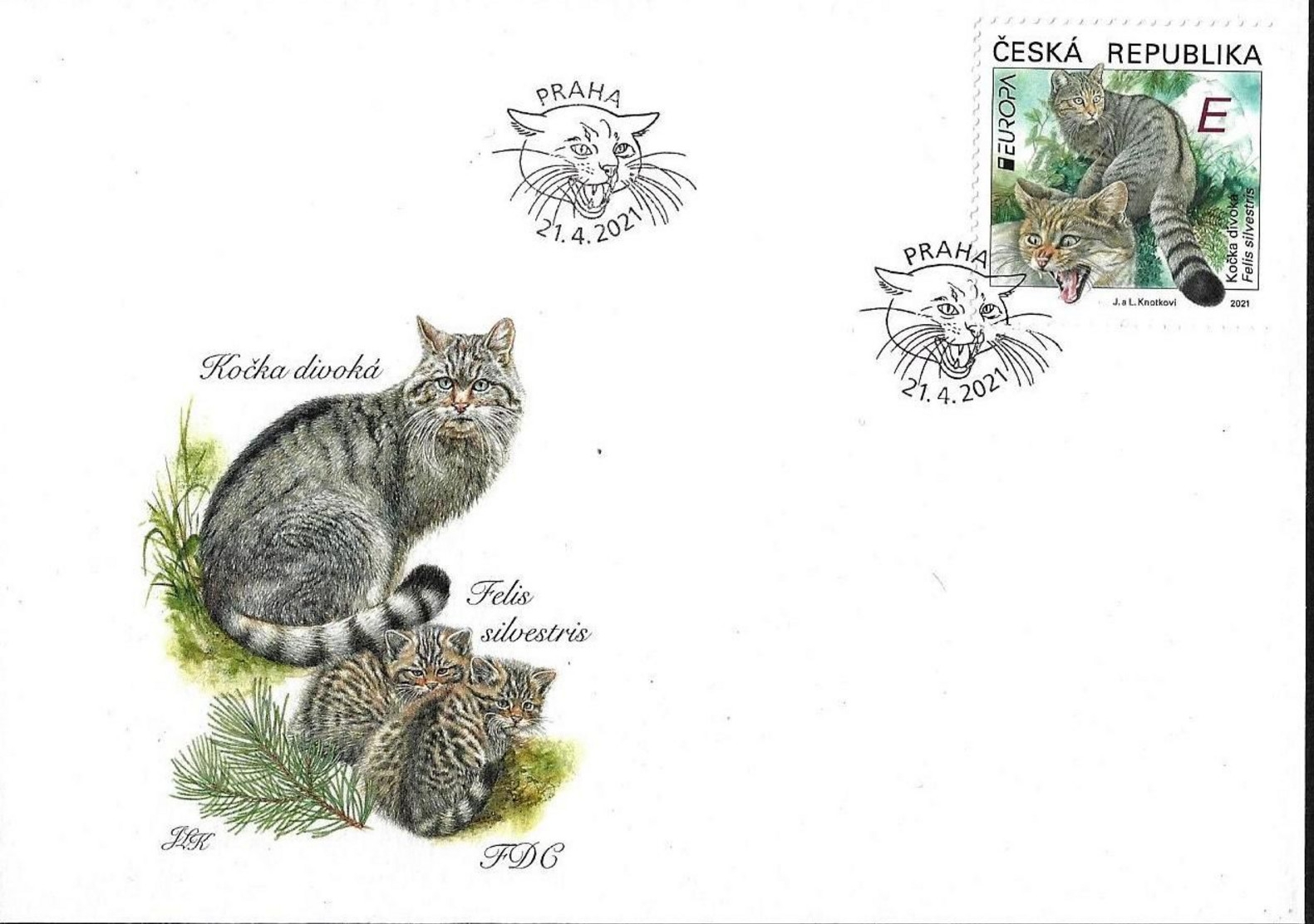 Face value: a stamp identified with the letter E corresponding to the price of Ordinary Item up to 50 g – European countries in international service (current price according to the Price List of Basic Postal Services).

The common topic of the 2021 EUROPA series issued by the participating countries is “National endangered wild animals”. The species chosen by the Czech Republic is the wildcat. The designers decided to portray not only one but a couple of wildcats on the stamp, with only the head of one of the two cats being captured.

The wildcat is one of Czech rarest mammals. The difference between the wildcat and the domestic cat is readily apparent: the wild species is larger, mostly due to the longer and thicker hair. The fur colour is typically grey-brown to grey-yellow with distinct stripes on the back, legs, and tail. The shape, length, and the way the wild and the domestic species hold the tail also differ. The wildcat has a larger head, clearly smaller ears, and long sensitive whiskers.

In the Czech Republic, the wildcat usually lives in deciduous or mixed forests in low-lying mountainous or hilly areas. What it needs is a place to hide in, such as rock crevices, cavities in old massive trees, or abandoned fox and badger burrows. 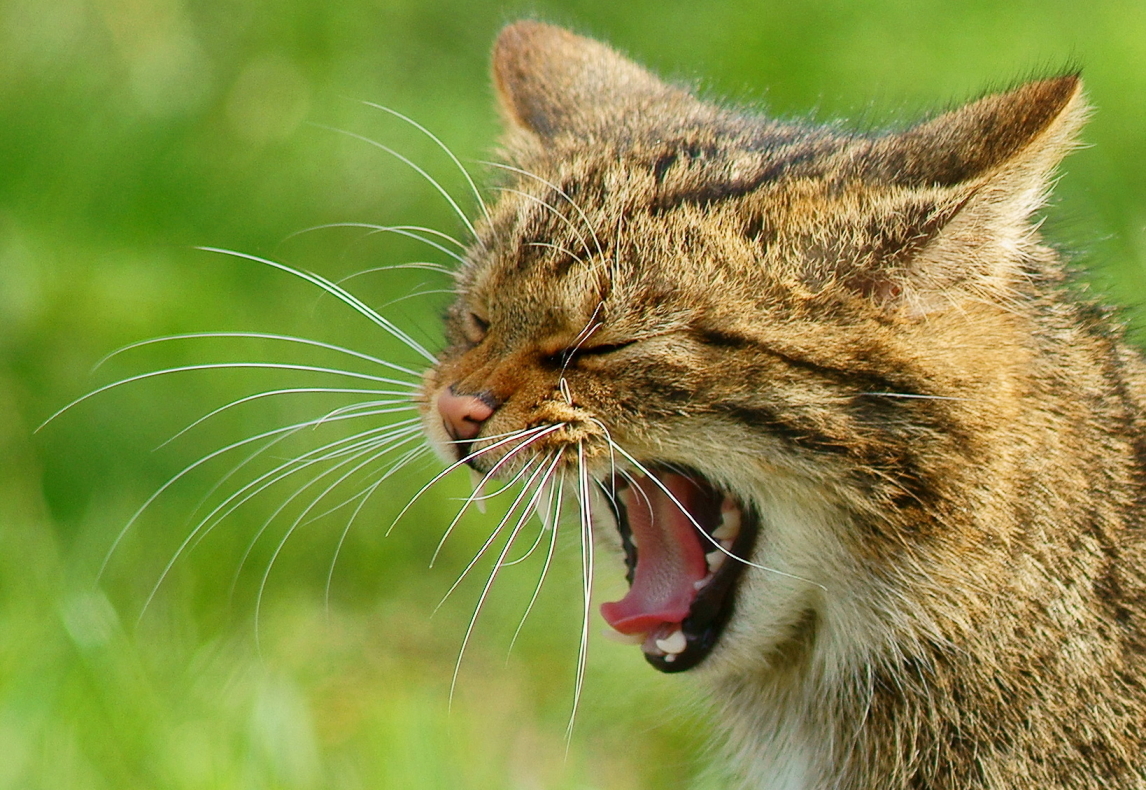 The wildcat and the other members of the cat family had a common ancestor about 10–15 million years ago. The European wildcat evolved during the Cromerian Stage about 866,000 to 478,000 years ago; its direct ancestor was Felis lunensis. The silvestris and lybica lineages probably diverged about 173,000 years ago.

The wildcat has been categorized as Least Concern on the IUCN Red List since 2002, since it is widely distributed, and the global population is considered stable and exceeding 20,000 mature individuals. However, in some range countries both wildcat species are considered threatened by introgressive hybridization with the domestic cat (F. catus) and transmission of diseases. Localized threats include being hit by vehicles, and persecution.

The association of African wildcats and humans appears to have developed along with the establishment of settlements during the Neolithic Revolution, when rodents in grain stores of early farmers attracted wildcats. This association ultimately led to it being tamed and domesticated: the domestic cat is the direct descendant of the African wildcat. It was one of the revered cats in ancient Egypt. The European wildcat has been the subject of mythology and literature. 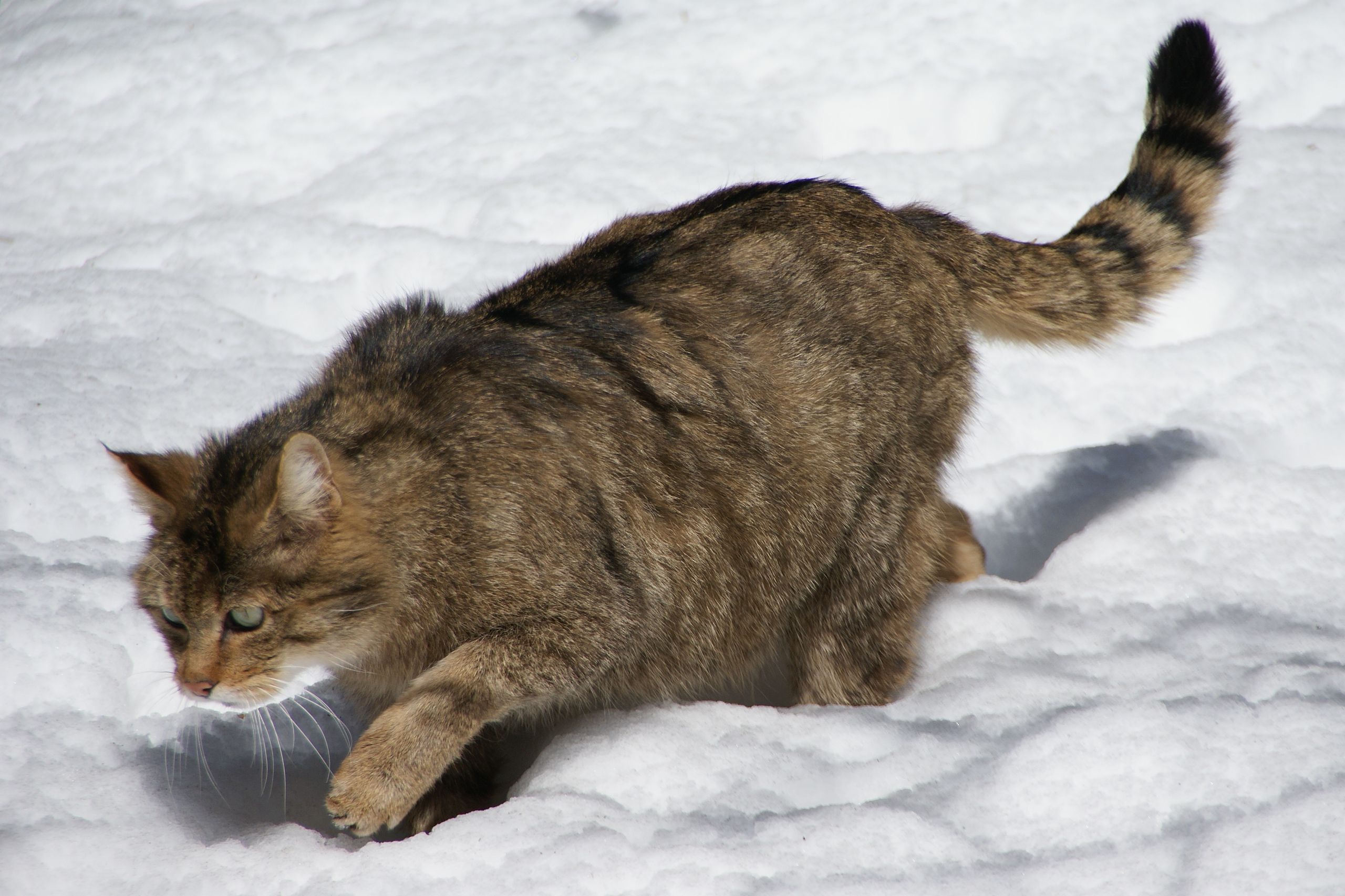