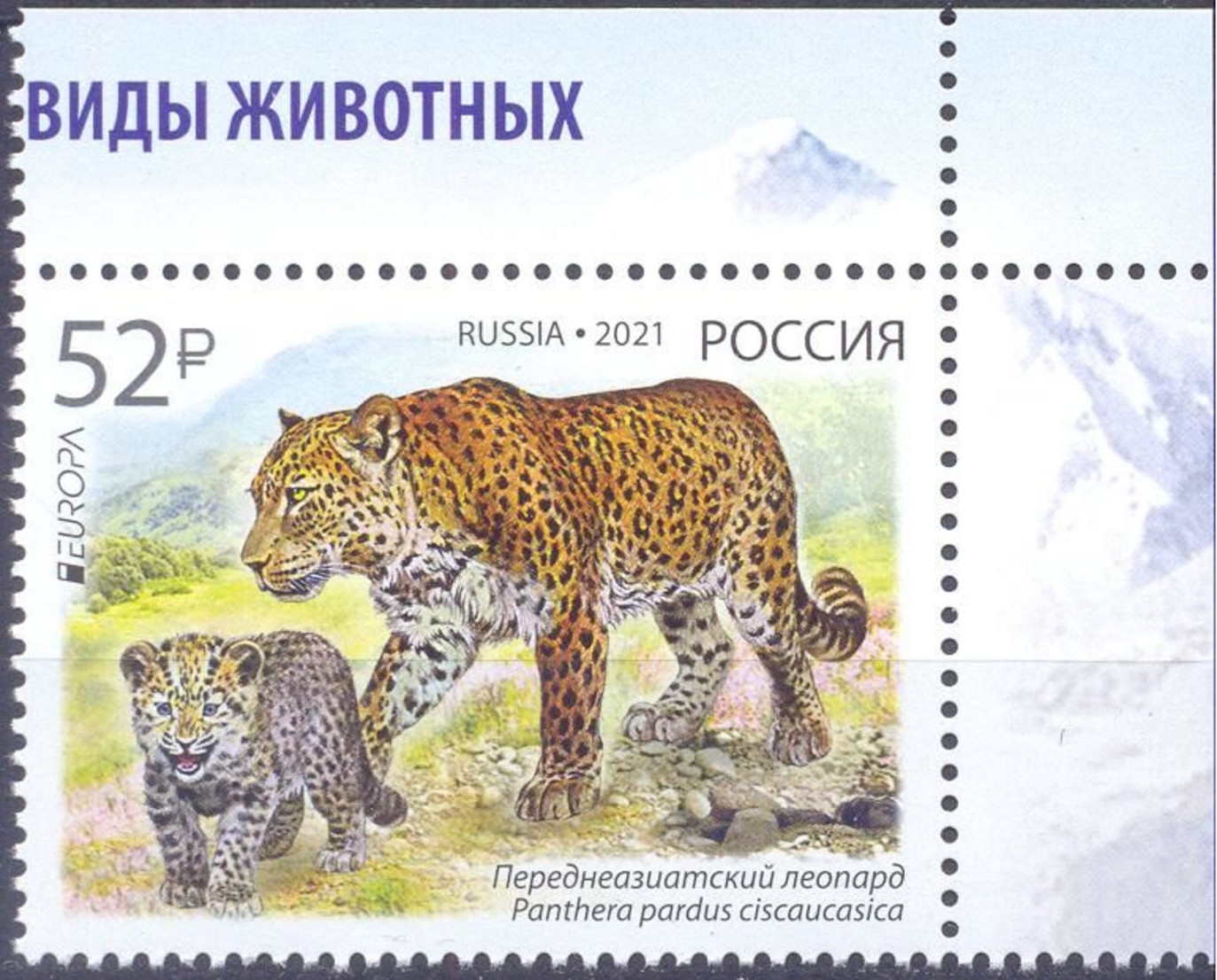 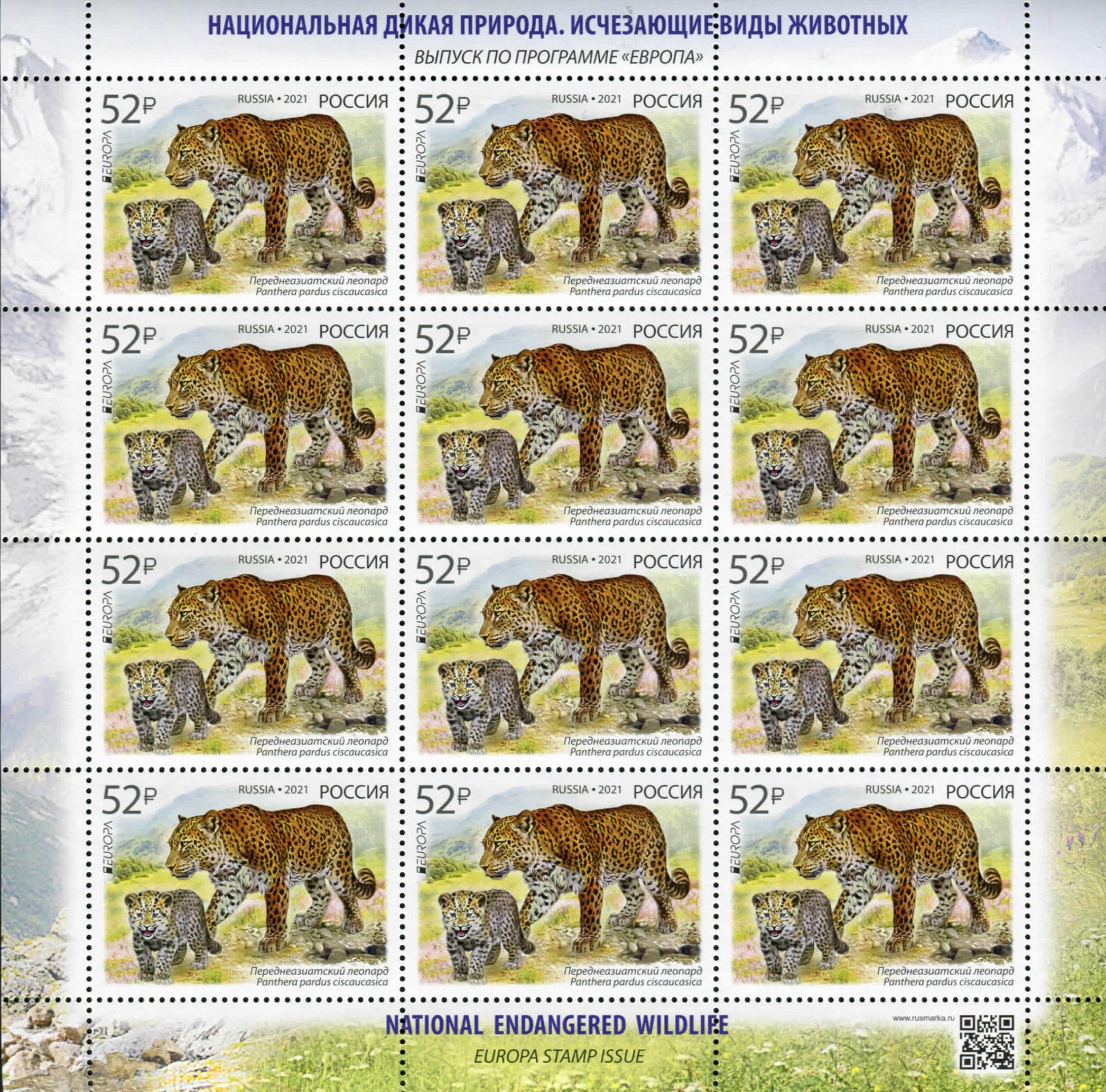 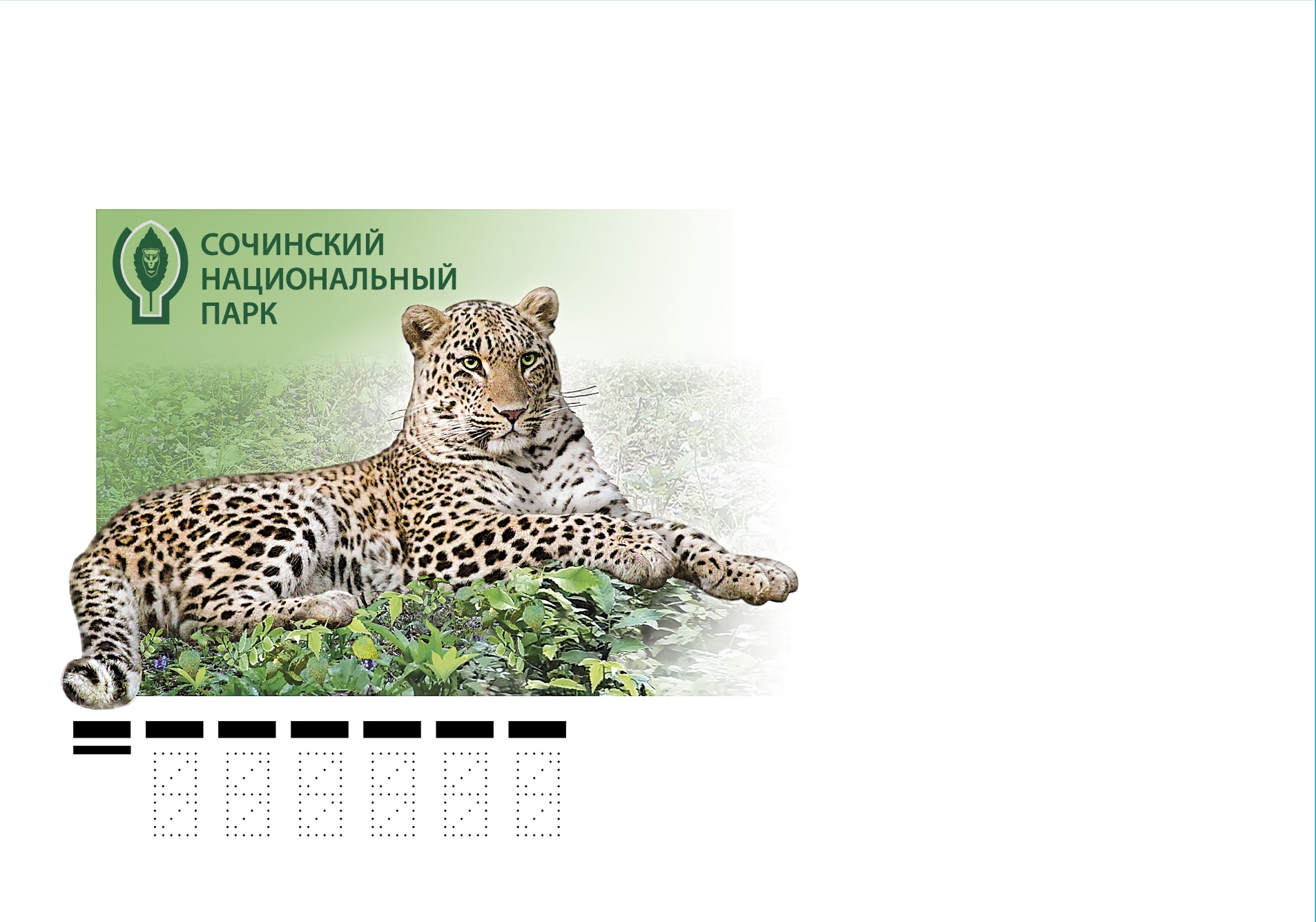 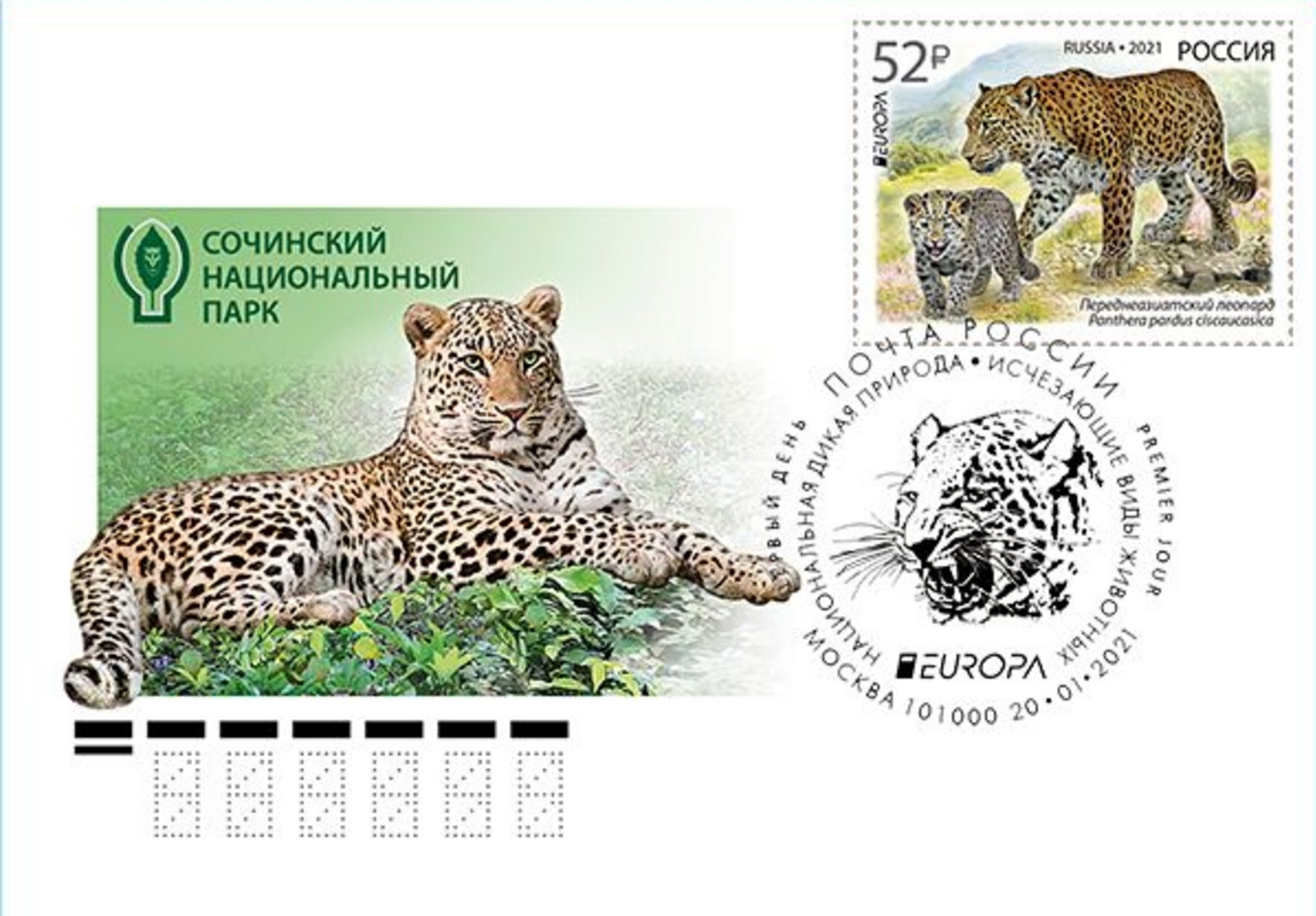 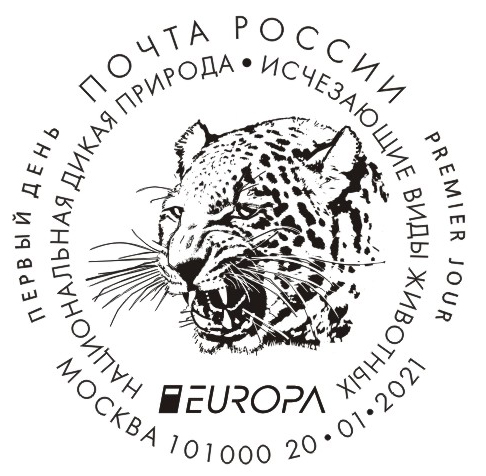 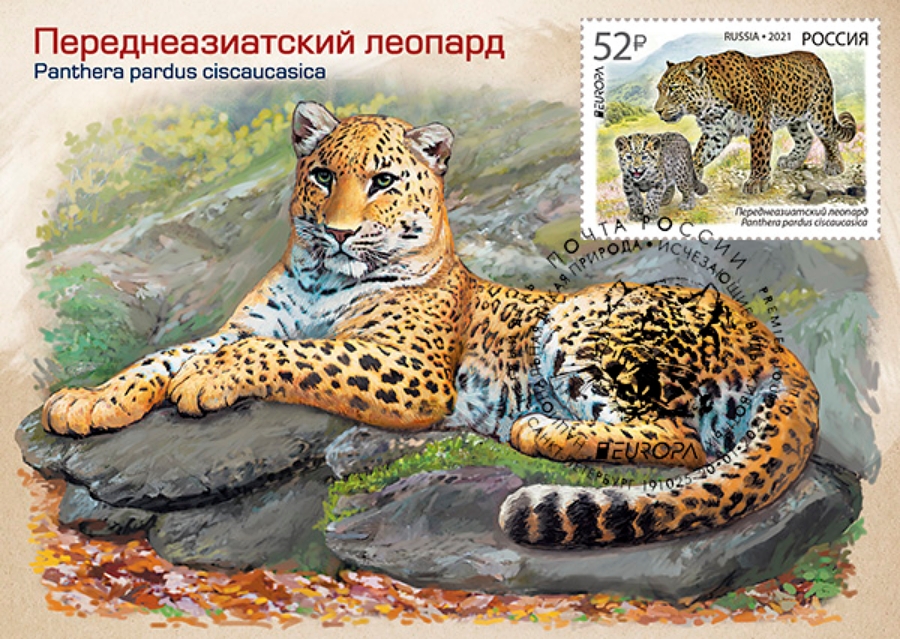 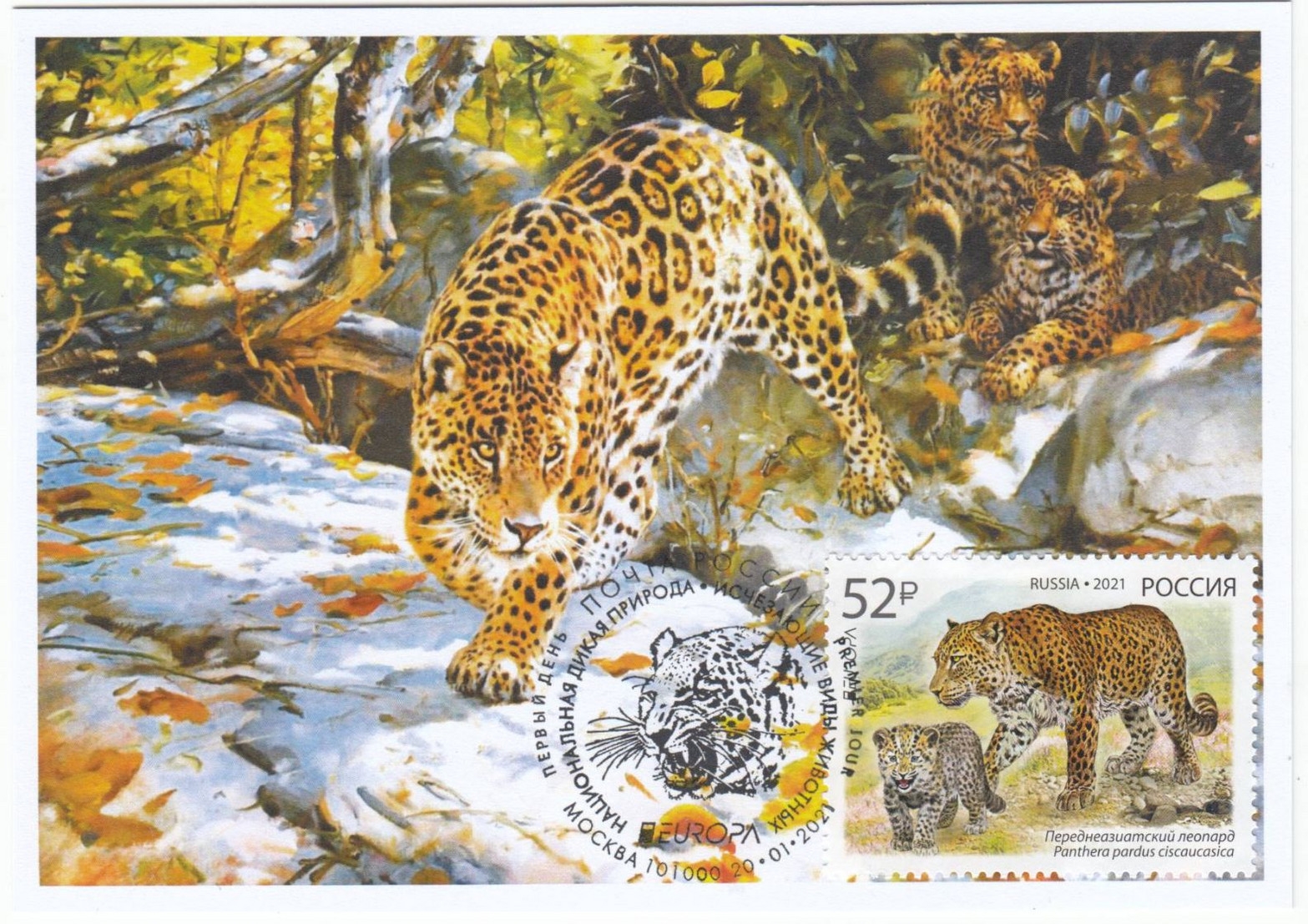 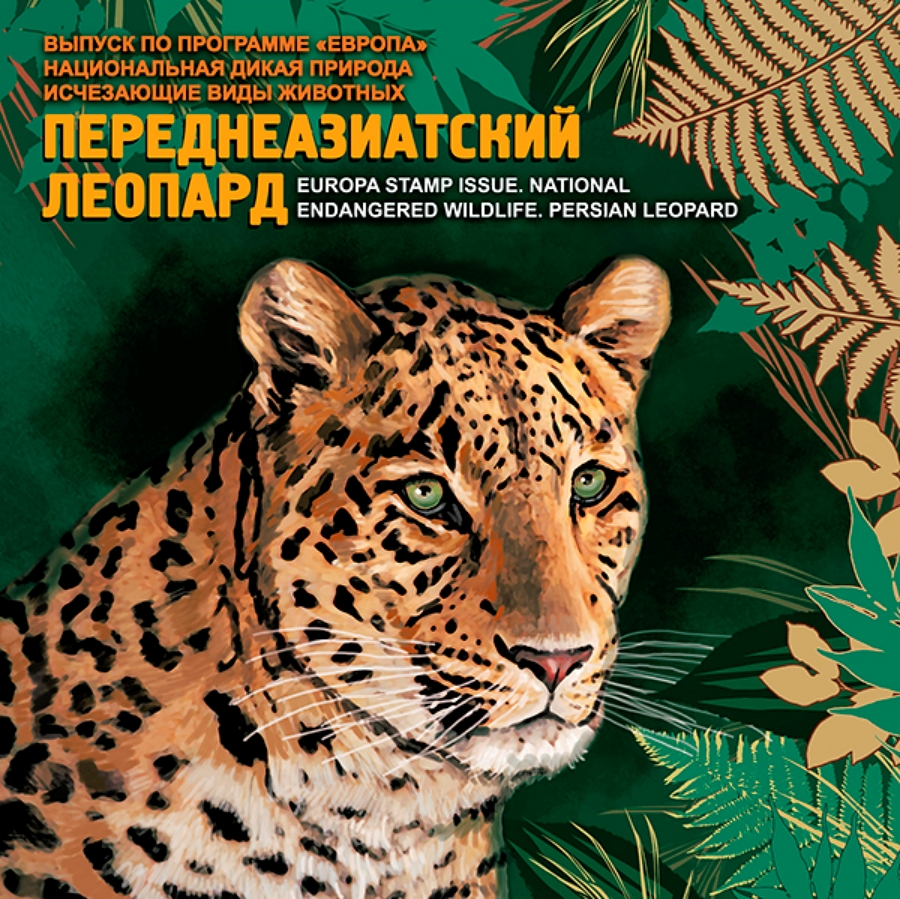 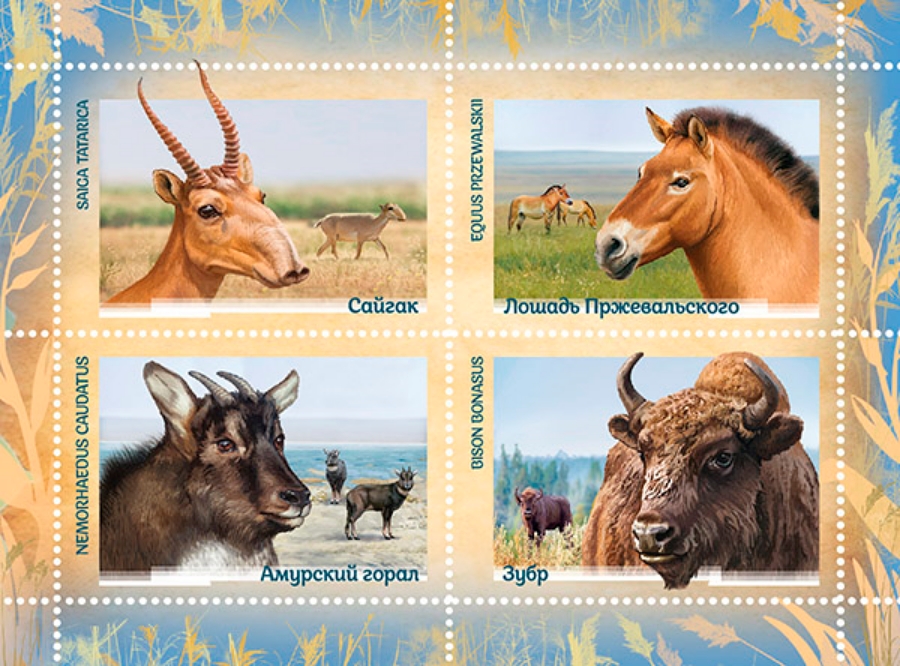 № 2722. The National Endangered Wildlife will go into postal circulation in the issue upon program Europe

Every year, more and more species of plants and animals are registered in the Red List of threatened species of the Russian Federation.

The Persian leopard (Panthera pardus ciscaucasica) is on the list of the Red Book of the Russian Federation and belongs to the first category as an endangered species. Hunting for leopards has been forbidden since 1957. The total global population is under 1,000 animals. It was completely exterminated in Russia, but presently, several young predators bred in the Leopard Recovery Center and released into the wild live in the Caucasus.

This is the largest subspecies of leopards with the body length from 126 to 171 cm but it can reach 183 cm and the tail length from 94 to 116 cm. The weight of a male on the average is about 70 kg, but the large individual can weigh more than 90 kg; females normally weigh 40-50 kg.

The Persian leopard exhibits two types of coloration, which is determined by the basic tint of the coat. The general color of the coat is grayish-ocher with a reddish shade; depending on the type, it will be either light or dark. Rosette-like spots on the animal coat are formed by 3 to 5 small spots and ensure a good disguise. The pattern formed by these spots is unique: there are no two leopards with identical rosettes.
The postal stamp provides an image of a Persian leopard female with a joey. 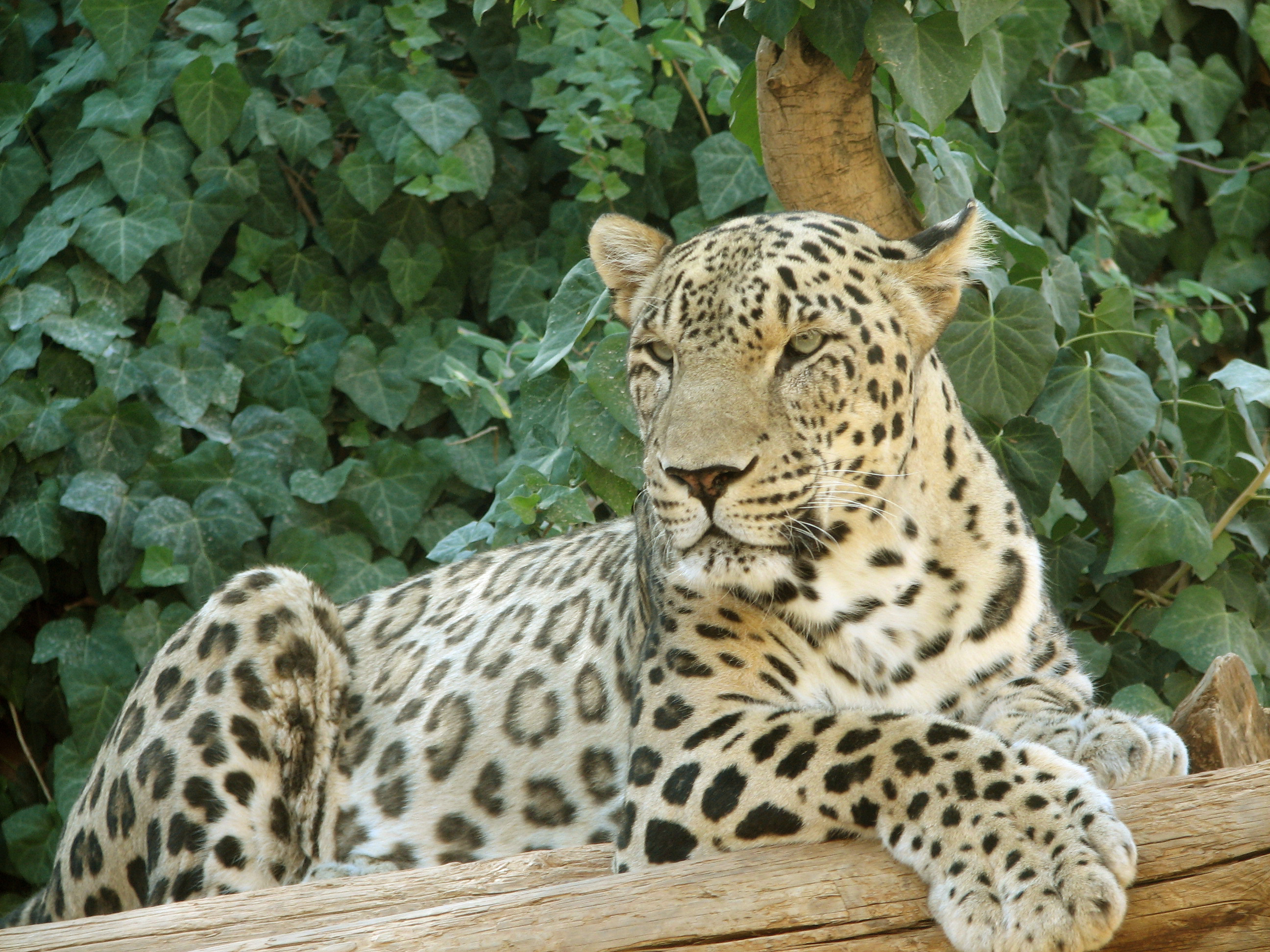 Panthera pardus tulliana is a leopard subspecies native to Turkey, the Caucasus, Southern Russia, Iran, Turkmenistan and Afghanistan. Since 2016, it has been listed as Endangered on the IUCN Red List, as the population was estimated at 871 to 1,290 mature individuals, with a declining trend.

Felis tulliana was the scientific name proposed by Achille Valenciennes in 1856, who described a skin and skull from a leopard killed near Smyrna, in western Turkey. In the 19th and 20th centuries, several naturalists described leopard zoological specimens from the Middle East:

In the 19th and 20th centuries, the Anatolian leopard was considered a distinct leopard subspecies that occurred only in western Turkey. The leopard specimens from the Middle East available in zoological museum collections do not differ significantly in the sizes and shapes of skulls. Therefore, the subspecific names tulliana, ciscaucasica and saxicolor are currently considered synonyms. An analysis of leopard samples from Afghanistan revealed that they belong to P. p. saxicolor, but intergrade with the Indian leopard (P. p. fusca) in eastern Afghanistan.

In 2017, the Persian leopard population was subsumed to P. p. tulliana, which is the oldest available name for the leopard subspecies in northwestern Asia.

The leopard population in southern Russia had been reduced to two small and isolated populations by the 1950s, and by 2007, there were fewer than 50 individuals in the region. Since 1954, leopards were thought to be extirpated in Georgia, following kills by hunters. The political and social changes caused by the breakup of the Soviet Union in 1992 caused a severe economic crisis and weakening of formerly effective protection systems; wildlife habitats were severely fragmented, leopards were persecuted and wild ungulates were hunted. In addition, inadequate baseline data and lack of monitoring programs made it difficult to evaluate declines of mammalian prey species. In the winter of 2003, zoologists found footprints of a leopard in Vashlovani National Park in southeastern Georgia. Camera traps recorded one young male individual several times. The individual was not recorded again between 2009 and 2014. A survey in 2019 found no leopards. 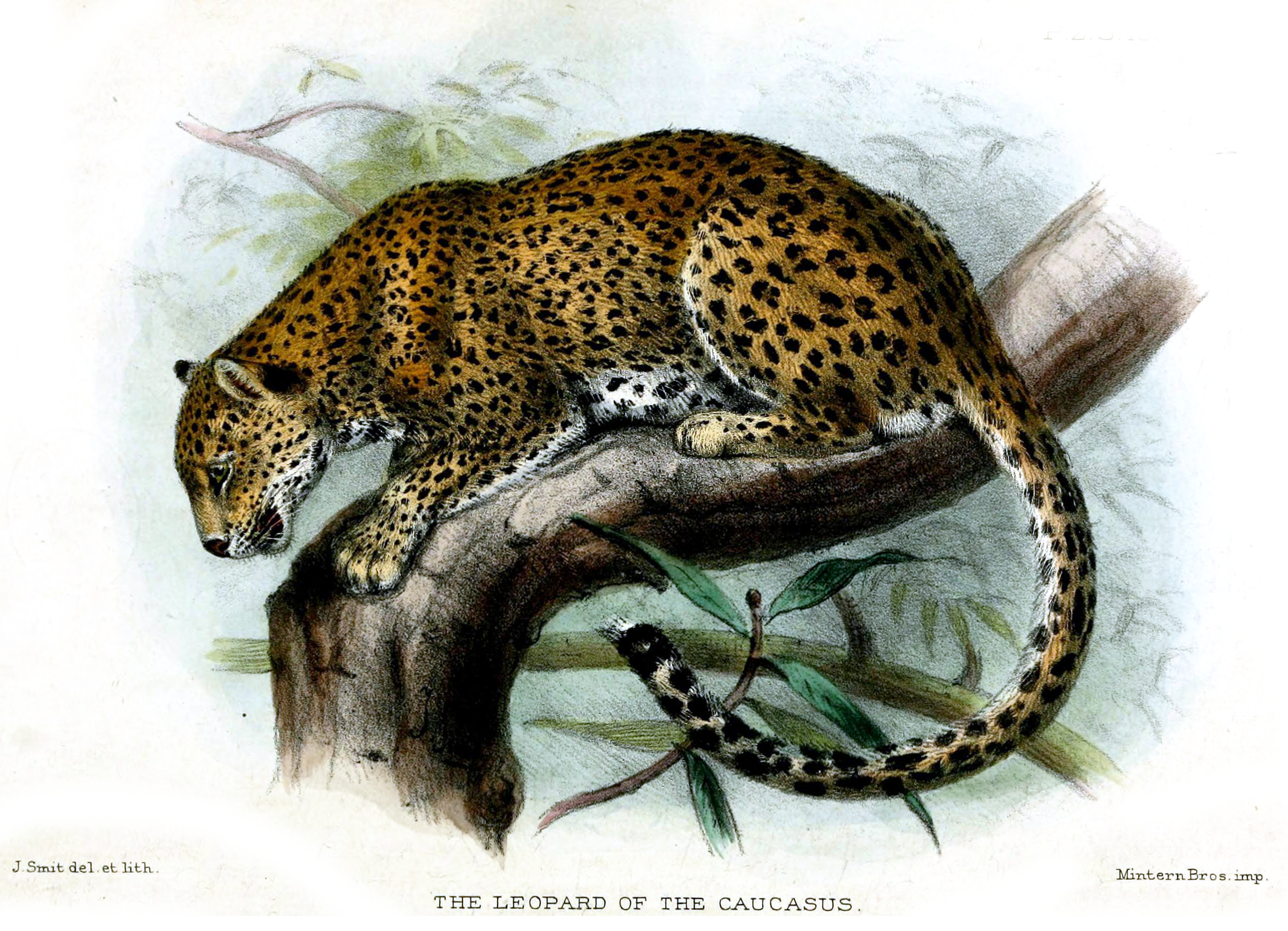