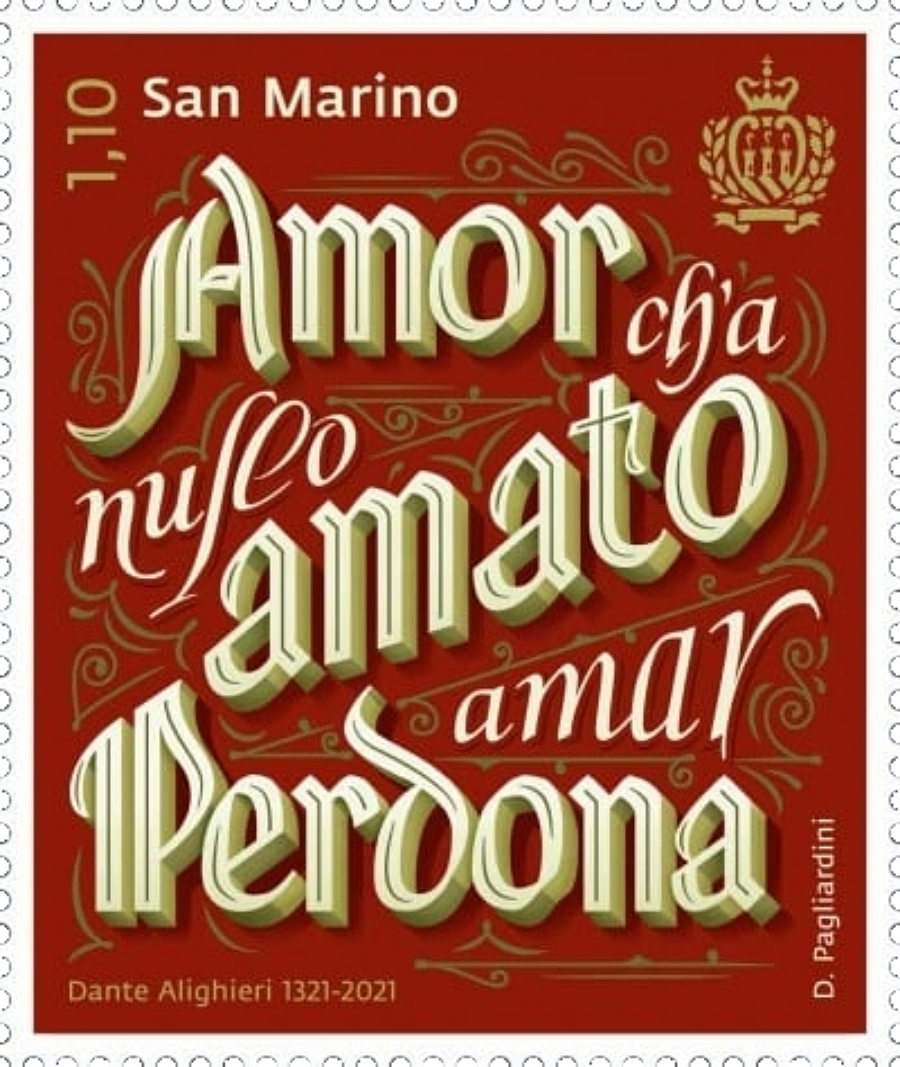 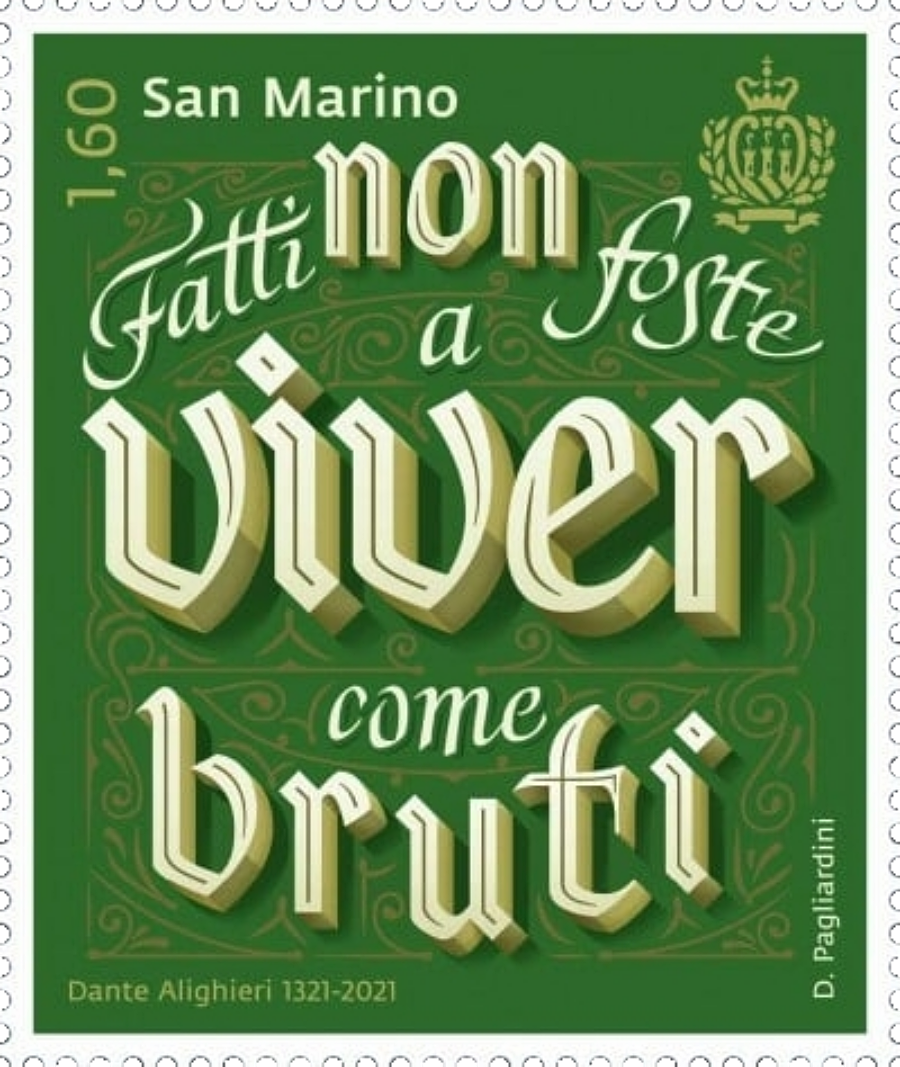 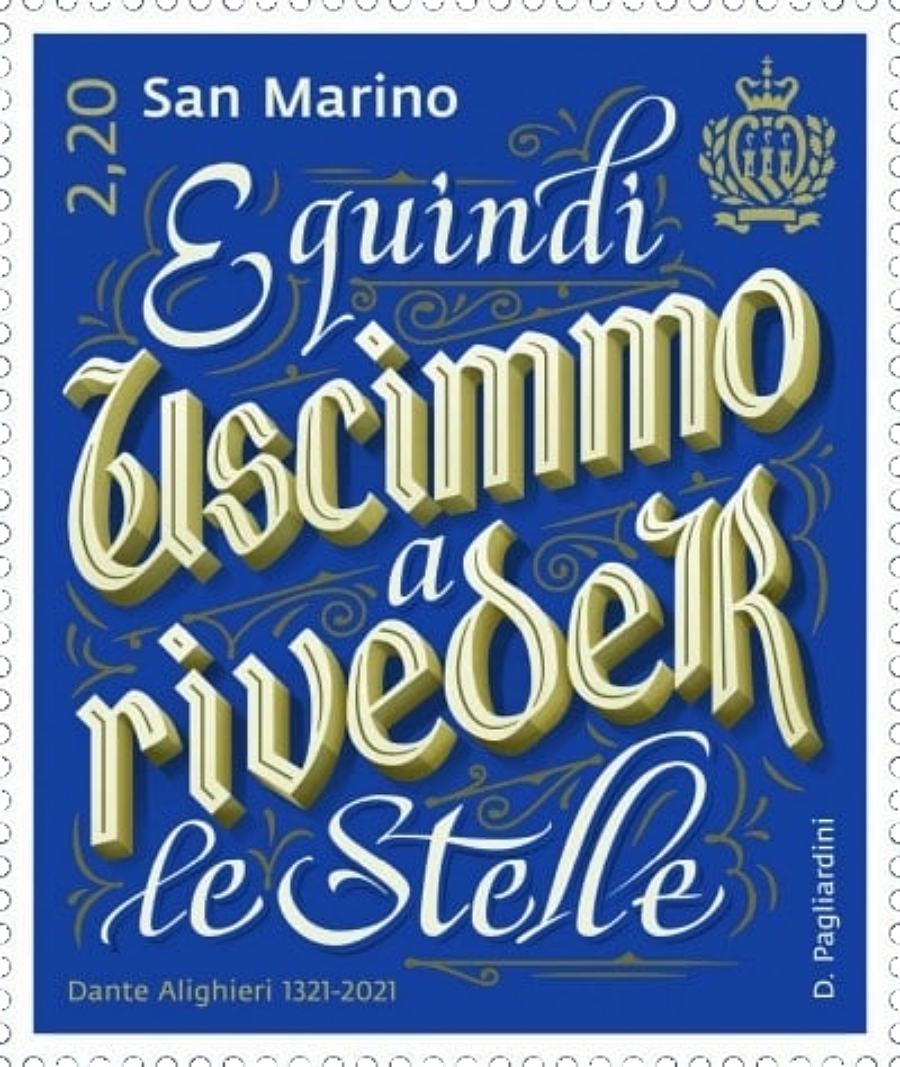 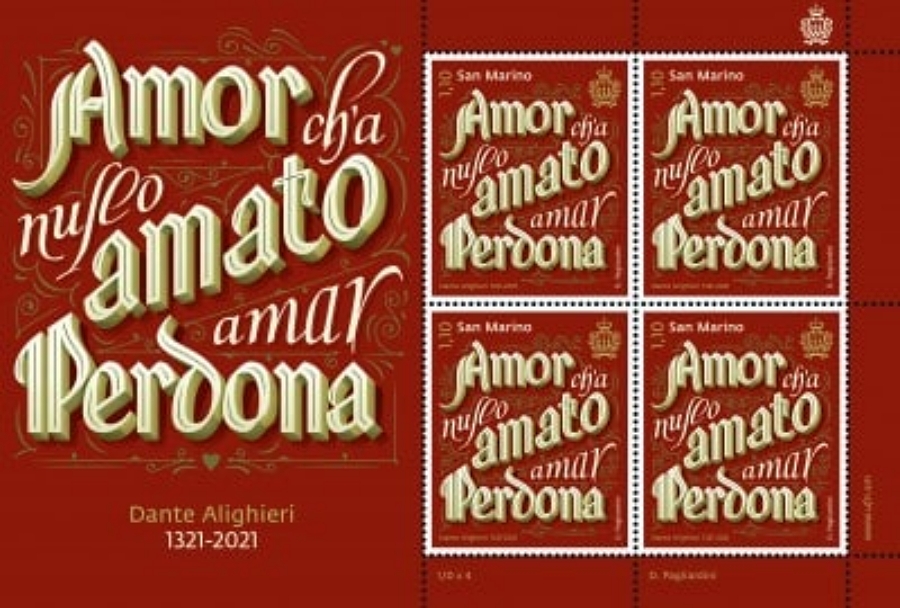 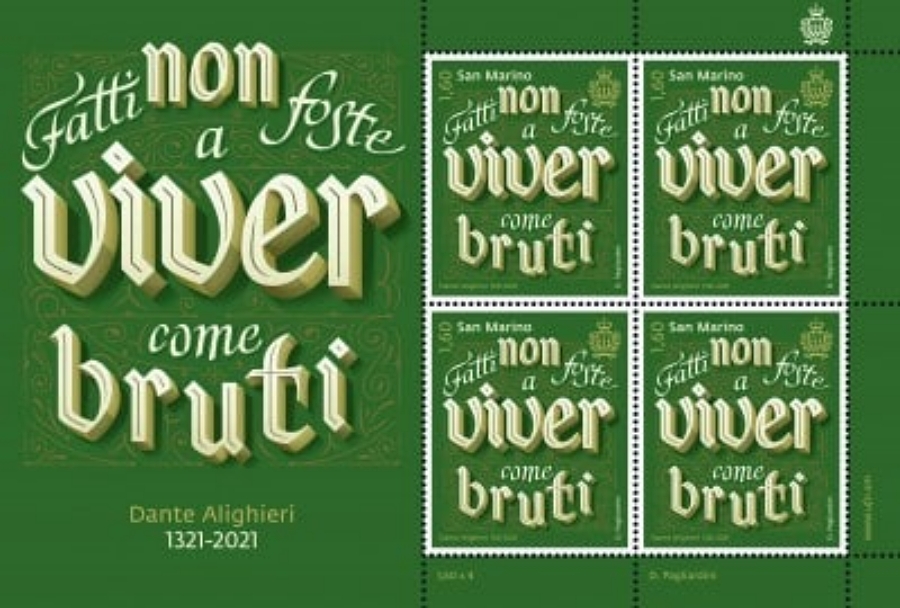 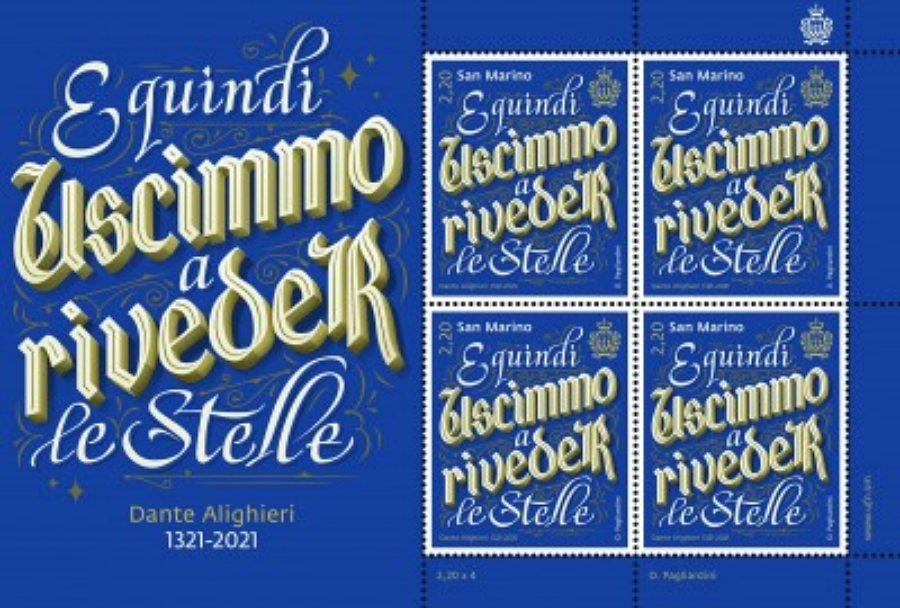 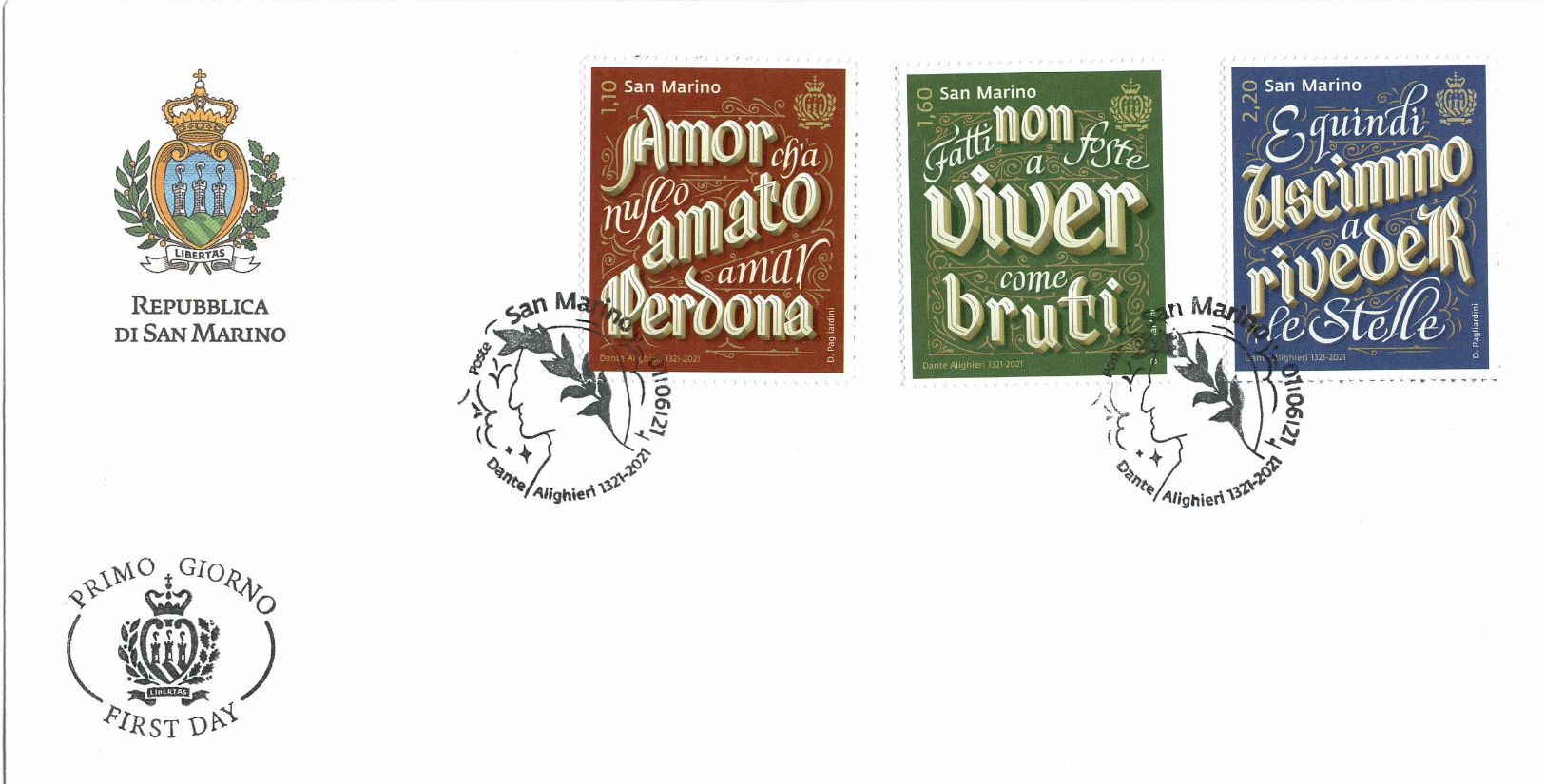 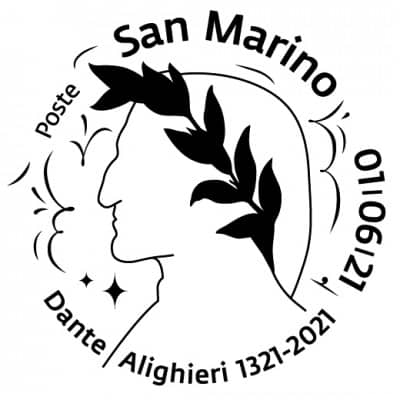 The postal series explores some of the verses of the Divine Comedy, which have become immortal over the centuries (the love between Paolo and Francesca, the exhortation of Ulysses and the exit from Hell) using typographical compositions with lettering specially made with calligraphy styles used at the time of the Supreme Poet. The gold colour, used for the decorations, embellishes the artwork that recall the capital letters of the manuscripts, while the other colors are linked to the message of the verses: blue for the starry sky, red for love and green for knowledge.

Dante Alighieri (c. 1265 – 1321), was an Italian poet, writer and philosopher. His Divine Comedy, originally called Comedìa and later christened Divina by Giovanni Boccaccio, is widely considered one of the most important poems of the Middle Ages and the greatest literary work in the Italian language.

Dante is known for establishing the use of the vernacular in literature at a time when most poetry was written in Latin, making it accessible only to the most educated readers. His De vulgari eloquentia (On Eloquence in the Vernacular) was one of the first scholarly defenses of the vernacular. His use of the Tuscan dialect for works such as The New Life (1295) and Divine Comedy helped establish the modern-day standardized Italian language, and set a precedent that important Italian writers such as Petrarch and Boccaccio would later follow.

Dante was instrumental in establishing the literature of Italy, and his depictions of Hell, Purgatory and Heaven provided inspiration for the larger body of Western art. He is cited as an influence on Geoffrey Chaucer, John Milton and Alfred Tennyson, among many others. In addition, the first use of the interlocking three-line rhyme scheme, or the terza rima, is attributed to him. He is described as the “father” of the Italian language, and in Italy he is often referred to as il Sommo Poeta (“the Supreme Poet”). Dante, Petrarch, and Boccaccio are also called the tre corone (“three crowns”) of Italian literature.

The Divine Comedy is a long Italian narrative poem by Dante, begun c. 1308 and completed in 1320, a year before his death in 1321. It is widely considered to be the pre-eminent work in Italian literature and one of the greatest works of world literature. The poem’s imaginative vision of the afterlife is representative of the medieval world-view as it had developed in the Western Church by the 14th century. It helped establish the Tuscan language, in which it is written, as the standardized Italian language. It is divided into three parts: Inferno, Purgatorio, and Paradiso.

The narrative takes as its literal subject the state of the soul after death and presents an image of divine justice meted out as due punishment or reward, and describes Dante’s travels through Hell, Purgatory, and Paradise or Heaven. Allegorically the poem represents the soul’s journey towards God, beginning with the recognition and rejection of sin (Inferno), followed by the penitent Christian life (Purgatorio), which is then followed by the soul’s ascent to God (Paradiso). Dante draws on medieval Roman Catholic theology and philosophy, especially Thomistic philosophy derived from the Summa Theologica of Thomas Aquinas. Consequently, the Divine Comedy has been called “the Summa in verse”.

In Dante’s work, the pilgrim Dante is accompanied by three guides: Virgil (who represents human reason), Beatrice (who represents divine revelation, theology, faith, and grace), and Saint Bernard of Clairvaux (who represents contemplative mysticism and devotion to Mary the Mother). Erich Auerbach said Dante was the first writer to depict human beings as the products of a specific time, place and circumstance as opposed to mythic archetypes or a collection of vices and virtues; this along with the fully imagined world of the Divine Comedy, different from our own but fully visualized, suggests that the Divine Comedy could be said to have inaugurated realism and self-portraiture in modern fiction.

The work was originally simply titled Comedìa in the first printed edition, published in 1472, Tuscan for “Comedy”, later adjusted to the modern Italian Commedia. The adjective Divina was added by Giovanni Boccaccio, due to its subject matter and lofty style, and the first edition to name the poem Divina Comedia in the title was that of the Venetian humanist Lodovico Dolce, published in 1555 by Gabriele Giolito de’ Ferrari.