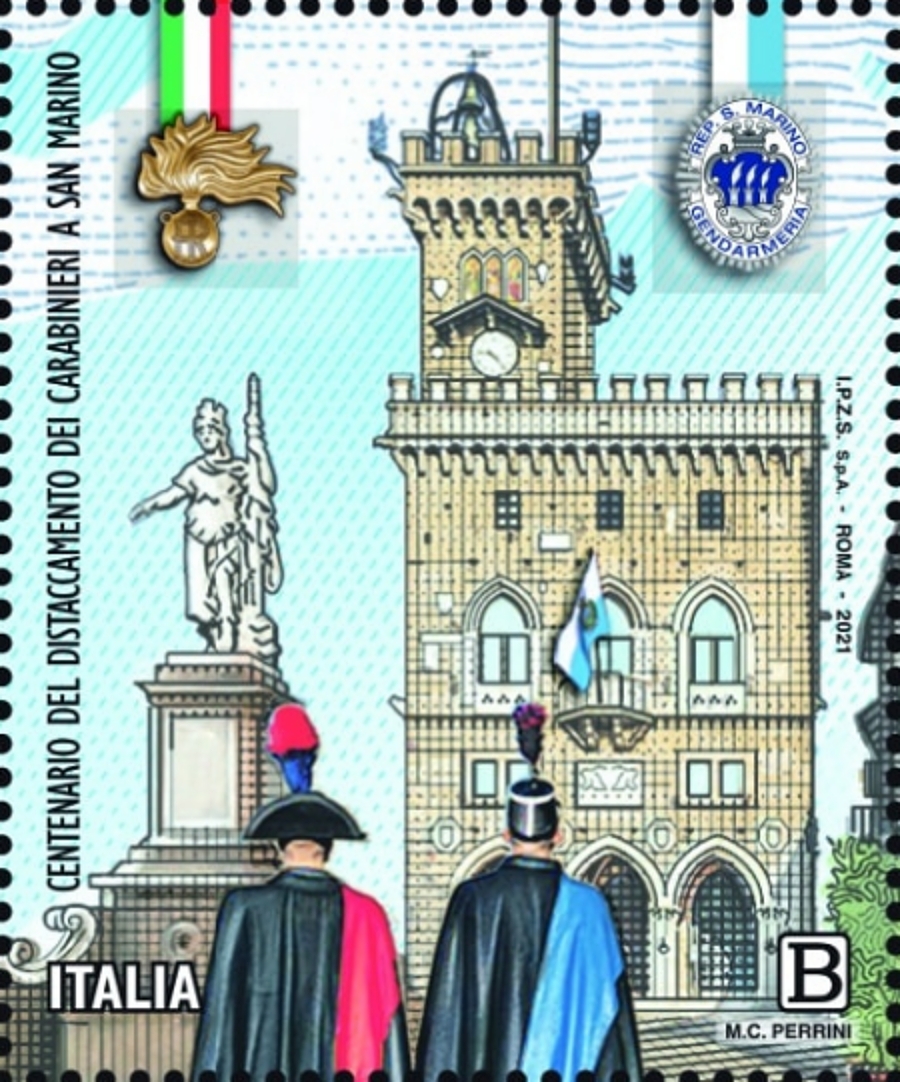 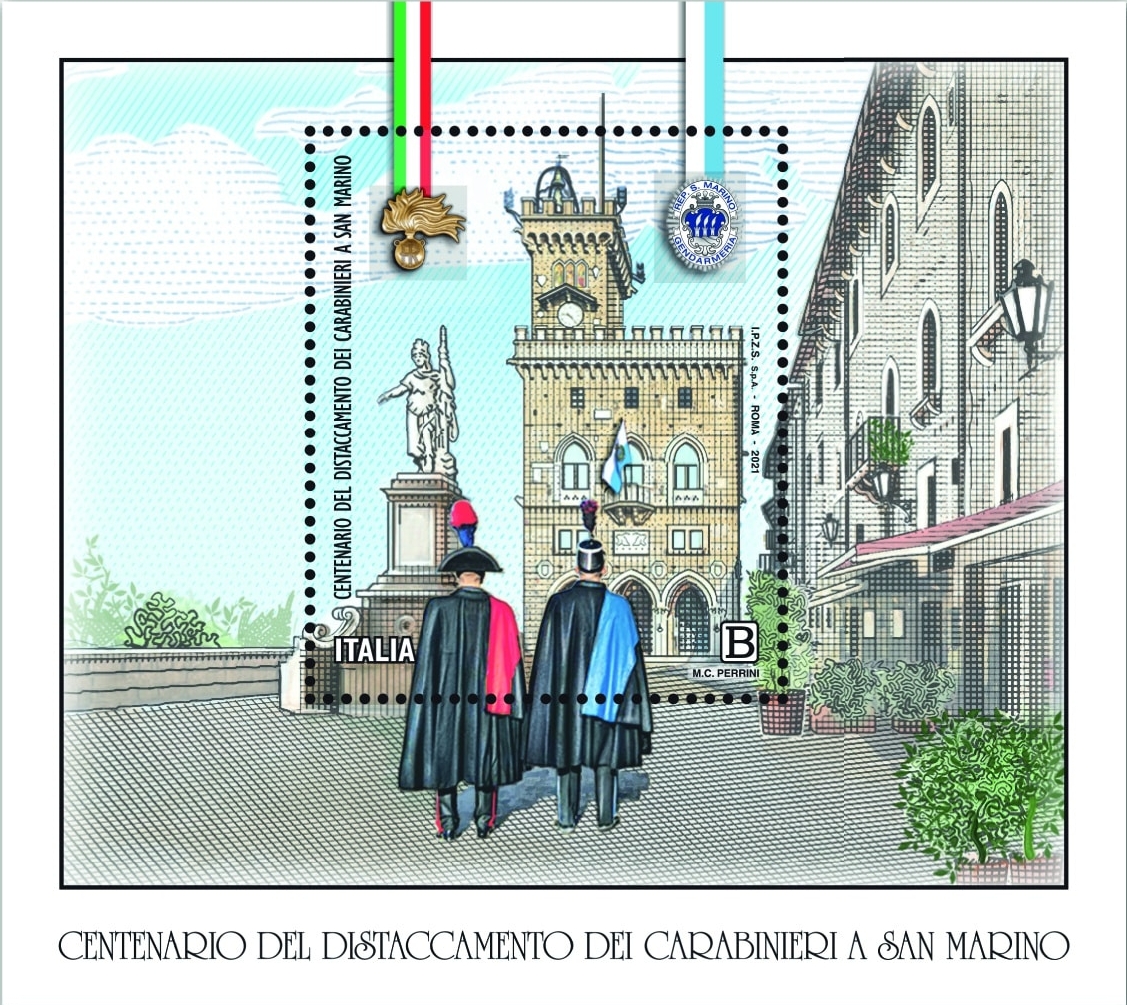 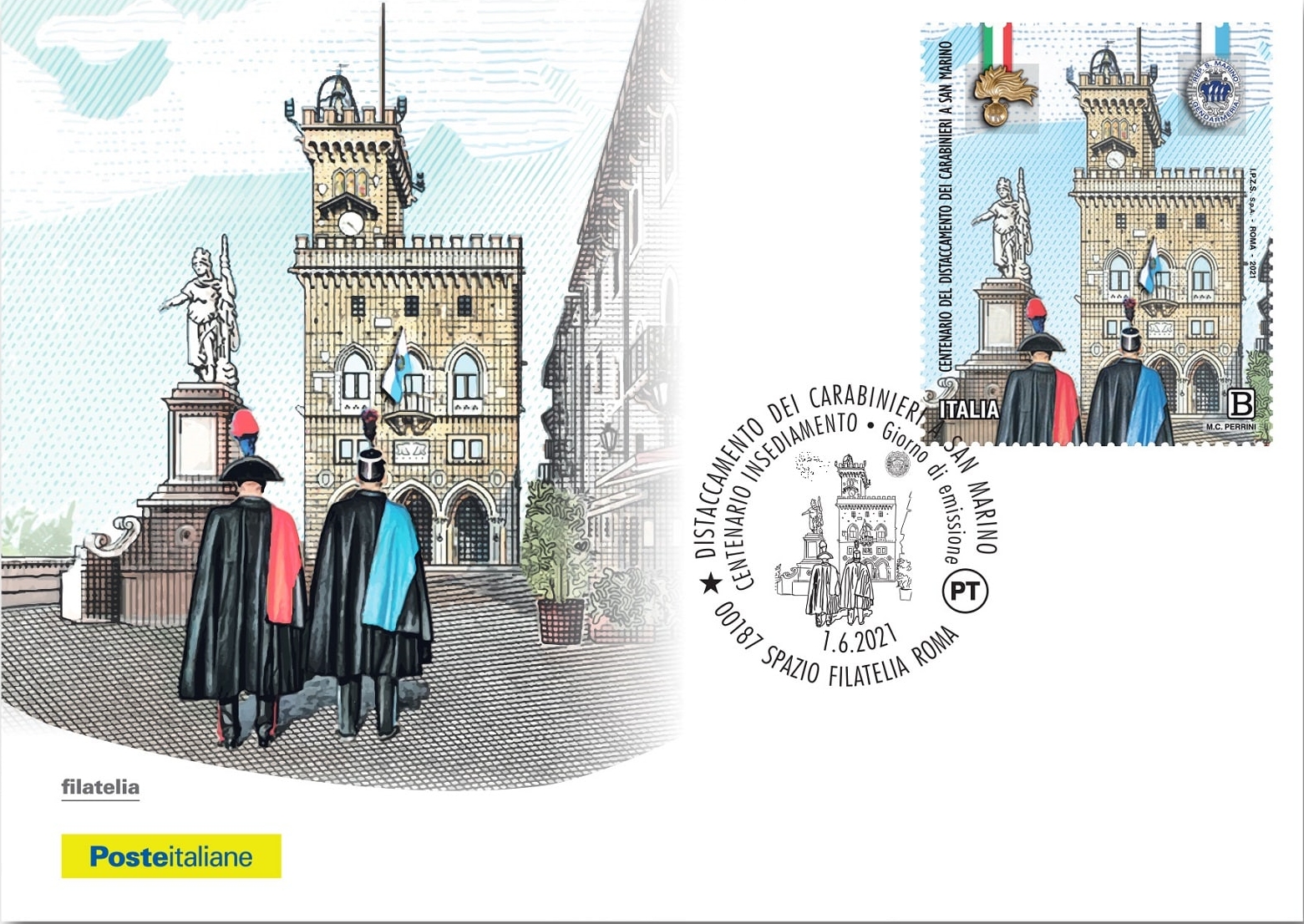 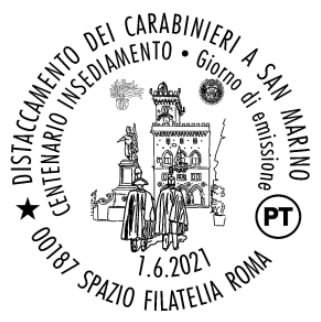 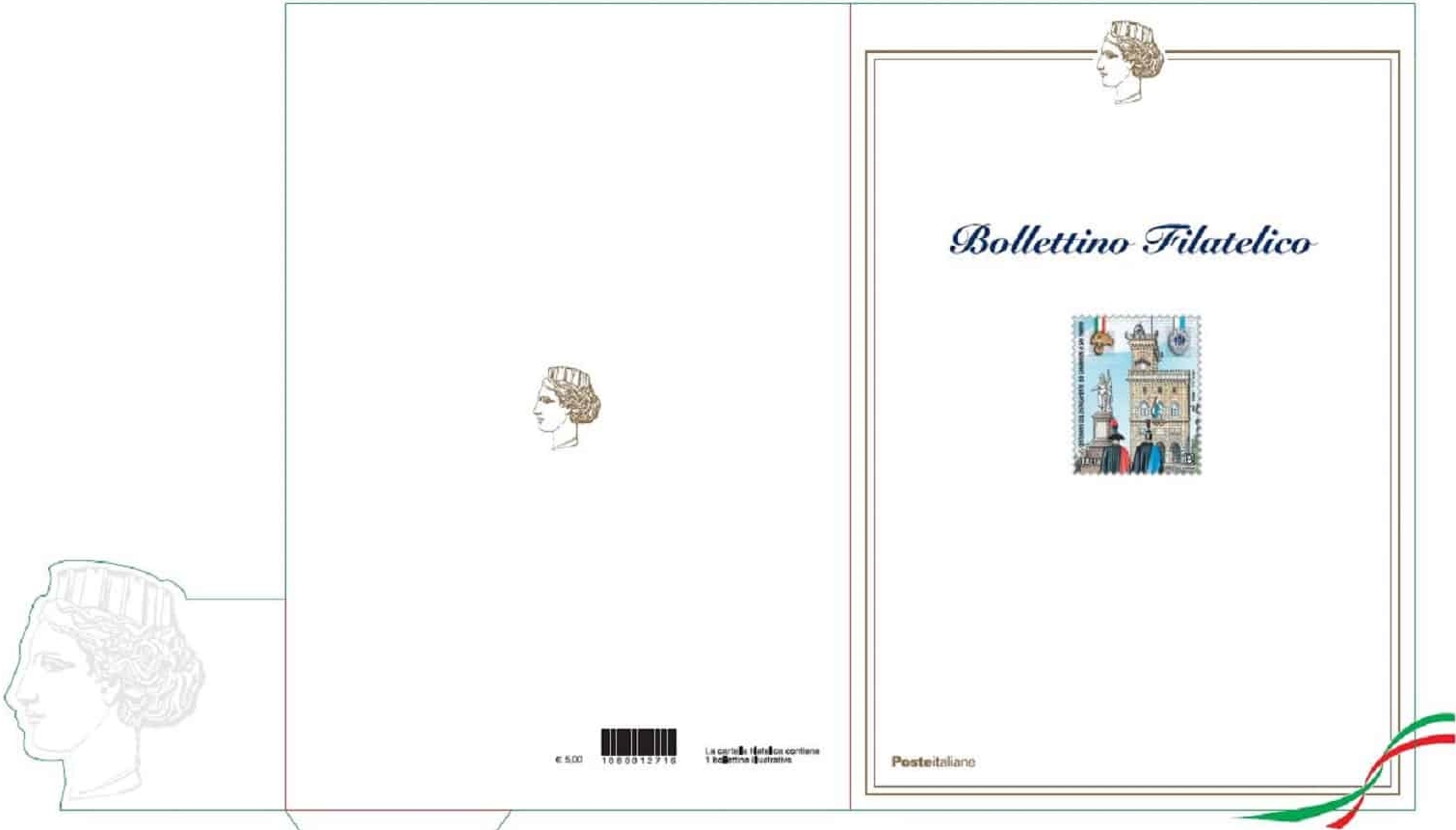 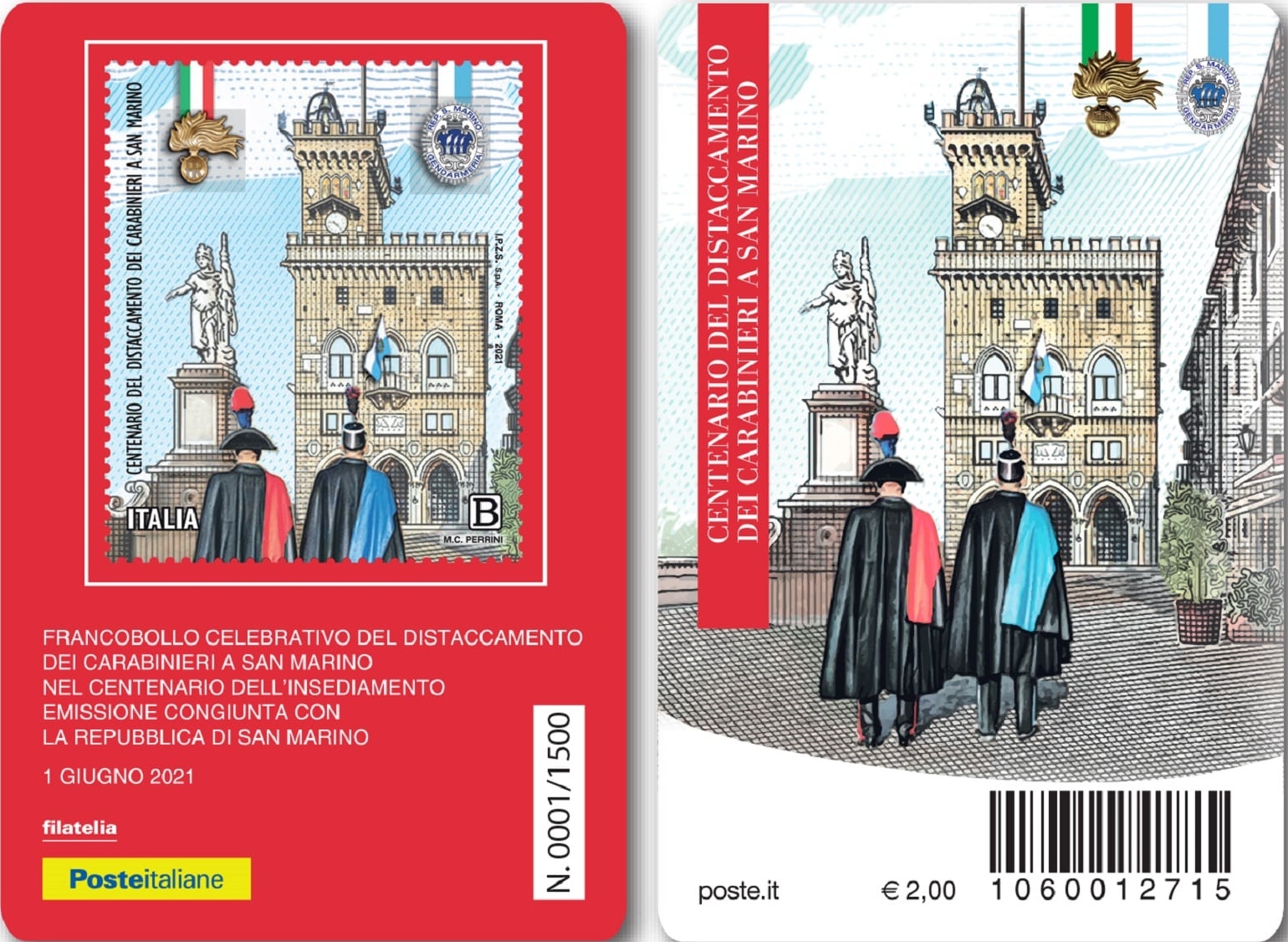 IN SHORT
Issue date: June 1, 2021
Issue of a stamp celebrating the detachment of the Carabinieri in San Marino, on the centenary of the settlement
DESCRIPTION
Value: tariff B.
Circulation: one hundred and fifty thousand sheets.

Characteristics of the Vignetta stamp : depicts a Carabiniere and a Gendarme from behind, dressed in full uniform, crossing Piazza della Libertà in San Marino; in the background the Statue of Liberty and the Palazzo Pubblico, also known as the Government Palace.
Above, the emblem of the Carabinieri is reproduced, a grenade surmounted by a flame, and the coat of arms of the Gendarmerie Corps of the Republic of San Marino supported, respectively, by ribbons with the colors of the Italian flag and the Republic of San Marine.
The stamp is completed by the legend “CENTENARY OF THE DETACHMENT OF THE CARABINIERI IN SAN MARINO”, the inscription “ITALIA” and the tariff indication “B”.
Sketcher: Maria Carmela Perrini.
Printing: Polygraphic Institute and State Mint SpA, in rotogravure.
Colors: four-color process.
Paper: gummed coated, non-watermarked fluorescent.
Weight: 100 gsm.
Paper size and print size: 40 x 48 mm.
Perforation: 13 x 13½.

Characteristics of the sheet:
The image of the sheet continues the representation of the stamp on its entire surface.
The leaflet is completed by the legend “CENTENARY OF THE DETACHMENT OF THE CARABINIERI IN SAN MARINO”.
Colors: four-color process.
Sheet format: 95 x 85 mm.

Commenting on the issue, the illustrative bulletin is produced with articles signed by General C.A. Teo Luzi, Commander General of the Carabinieri and Col. Maurizio Faraone, Commander of the Corps of the Gendarmerie of the Republic of San Marino.
The “Spazio Filatelia” in Rome, located in Piazza San Silvestro 20, will use the cancellation special made by Filatelia di Poste Italiane.
The postage stamp and related philatelic products can be purchased at the authorized Post Offices, the “Spazio Filatelia” of Florence, Genoa, Milan, Naples, Rome, Rome 1, Turin, Trieste, Venice, Verona and on poste.it site.

The Carabinieri (formally Arma dei Carabinieri, “Arm of Carabineers”; previously Corpo dei Carabinieri Reali, “Royal Carabineers Corps”) are the national gendarmerie of Italy who primarily carry out domestic policing duties. It is one of Italy’s main law enforcement agencies, alongside the Polizia di Stato and the Guardia di Finanza. As with the Guardia di Finanza but in contrast to the Polizia di Stato, the Carabinieri are a military force. As the fourth branch of the Italian Armed Forces, they come under the authority of the Ministry of Defense; for activities related to inland public order and security, they functionally depend on the Ministry of the Interior. In practice, there is a significant overlap between the jurisdiction of the Polizia di Stato and Carabinieri, who are contacted on separate emergency telephone numbers. Unlike the Polizia di Stato, the Carabinieri have responsibility for policing the military, and a number of members regularly participate in military missions abroad.

They were originally founded as the police force of the Kingdom of Sardinia, the forerunner of the Kingdom of Italy. During the process of Italian unification, the Carabinieri were appointed as the “First Force” of the new national military organization. Although the Carabinieri assisted in the suppression of opposition during the rule of Benito Mussolini, they were also responsible for his downfall and many units were disbanded during World War II by Nazi Germany, which resulted in large numbers of Carabinieri joining the Italian resistance movement.

In 2000, they were separated from the Army to become a separate branch of the Italian Armed Forces. Carabinieri have policing powers that can be exercised at any time and in any part of the country, and they are always permitted to carry their assigned weapon as personal equipment (Beretta 92FS pistols).

The Carabinieri are often referred to as “La Benemerita” (The Reputable or The Meritorious) as they are a trusted and prestigious law enforcement institution in Italy. The first official account of the use of this term to refer to the Carabinieri dates back to 24 June 1864.

Inspired by the French Gendarmerie, the corps was created by King Victor Emmanuel I of Savoy with the aim of providing the Kingdom of Sardinia with a police corps. Previously, police duties were managed by the Dragoni di Sardegna Corps, created in 1726 and composed of volunteers. After French soldiers had occupied Turin at the end of the 18th century and later abandoned it to the Kingdom of Piedmont, the Royal Carabinieri Corps was instituted under the Royal Patents of 13 July 1814.

The name derives from the French word carabinier, meaning “soldier armed with a carbine.”

The new force was divided into divisions on the scale of one division for each province. The divisions were further divided into companies and subdivided into lieutenancies, which commanded and coordinated the local police stations and were distributed throughout the national territory in direct contact with the public.

In 1868, the Corazzieri (mounted division) was formed – initially as an escort of honour for the sovereign, and since 1946 for the President of the Republic. The Italian unification saw the number of divisions increased, and on 24 January 1861 the Carabinieri were appointed the “First Force” of the new national military organization.

In May 1915 Italian troops marched to encompass South Tyrol, territory of their former allies the Austro-Hungarian empire, in the Fronte italiano campaign. The defenders had sufficient time to prepare strong fortifications there, and in the Carso theatre to the east, and the Italian regiments, under overall command of General Cadorna, found themselves repeatedly repulsed in harsh fighting. The role of the Carabinieri was to act as barrier troops, setting up machine gun posts to control the rear of the attacking regiments and prevent desertion.

During the fascist regime of Benito Mussolini (1922–1943), the Carabinieri were one of the police forces entrusted with suppressing opposition in Italy. During the same period, while part of the Italian African Police (mainly in the late 1930s), they were involved in atrocities in colonial Italian East Africa during the Second Italo-Abyssinian War. During World War II they fought in their function as military police against the Allied forces, and against Yugoslav partisans as part of the Italian occupation force in Yugoslavia.

After Mussolini was voted out of office on 25 July 1943, on the orders of the king he was arrested by the Carabinieri as he left the king’s private residence in Rome and subsequently imprisoned on Campo Imperatore by Carabinieri forces. After the armistice between Italy and the Allies on 3 September 1943 and the country’s split into the fascist Italian Social Republic in the north and the Kingdom of Italy in the south, the Carabinieri split into two groups.

In southern Italy the Carabinieri Command for Liberated Italy was founded in Bari, mobilizing new units for the Italian war of liberation. These units were attached to the Italian Liberation Corps and the six Italian Combat Groups of the Italian Co-Belligerent Army, fighting with the Allied forces. In northern Italy the fascist regime organized the Guardia Nazionale Repubblicana (composed of Carabinieri, former colonial policemen, Guardia di Finanza and customs police), to employ it as a military police and rapid-deployment anti-guerilla force. GNR was later joined (but not taken over) by the Black Brigades which represented a new militant incarnation of the Fascist party.

Due to the role the Carabinieri had played in the downfall of Mussolini, and since one of the few units which fought the German occupation of Rome were the Granatieri di Sardegna regiments and the II Carabinieri cadet battalion, the Germans did not view the Carabinieri as loyal to the fascist cause, They disarmed the force and began the deportation of 8,000 officers to Germany for forced labor on 6 October 1943; the Italian Colonial Police took over their jobs.

Subsequently, large numbers of Carabinieri joined the Italian resistance movement to fight German and Italian fascists. Nonetheless, some 45,000 officers remained on the job and as of March 1944, this group was the only national security force in Italy.

After the war the Carabinieri counted at least 2,735 fallen and 6,500 wounded, out of approximately 14,000 who had joined the Resistance in northern and central Italy. In Yugoslavia the Carabinieri formed a battalion of the Italian partisan Garibaldi Division, which fought alongside the Yugoslav partisans against German and Croatian Ustaše Forces. The battalion lost over 80% of its members in combat and was awarded the Silver Medal of Military Valor to commemorate the fallen.

One notable act of heroism in this era came from Vice Brigadiere Salvo D’Acquisto, who was executed by the Germans in Palidoro (near Rome) during World War II. D’Acquisto exchanged his life for the lives of citizens due to be executed in retaliation for the killing of a German soldier; instead, he claimed responsibility and was executed for the offence.

The Carabinieri were in the forefront of many internal conflicts in Italy in the late 20th century, such as the Years of Lead (against the Red Brigades) and the Second Mafia War (against the Corleonesi Mafia). They participated in, and lost men, in events such as the Peteano massacre in 1972, Circonvallazione massacre in 1982, and the murder of Emanuele Basile. Until 2000, the Carabinieri were part of the Italian Army. On 31 March 2000, they were separated to become the fourth branch of the Italian Armed Forces. Interpol summarizes this force (part of the Ministry of Defense) as having a “nationwide remit for crime investigations. It also serves as the military police for the Italian armed forces and can be called upon for national defense action.”

According to Europol (the EU’s law enforcement agency), the Carabinieri Corps’ military duties include “contributing to national defense, participating in military operations in Italy and abroad, executing military police functions and ensuring the security of Italian diplomatic and consular representations”. As a national police force, it “carries out public order and security policing, as well as investigative activities on its own initiative or at the request of the judicial authorities”. Europol also states that the force is “supplemented by the Specialized Carabinieri Commands, responsible for safeguarding the primary interests of the community: from the protection of the environment, health, work and national cultural heritage, to the observance of community and agri-food regulations, to the suppression of forgery [of] currency”.

In recent years Carabinieri units have been dispatched on peacekeeping missions, including Kosovo, Afghanistan, and Iraq. In 2003, 12 Carabinieri were killed in a suicide bombing on their base in Nasiriyah, near Basra in southern Iraq, in the largest Italian military loss of life in a single action since the Second World War. Recent projects (as of April 2018) include training and assisting the Afghan National Security Forces, the Afghan National Police, and the Afghan National Civil Order Police. In Iraq, Carabinieri have trained 13,000 police officers; during the ISIS destruction of historic sites, Italy dispatched troops from the Carabinieri’s Command to protect cultural heritage.

At the Sea Island Conference of the G8 in 2004, Carabinieri were given a mandate to establish a Centre of Excellence for Stability Police Units to spearhead the development of training and doctrinal standards for civilian police units attached to international peacekeeping missions.

The State Forestry Corps was dissolved on 31 December 2016 and personnel with forestry police function were militarized and absorbed by the Carabinieri. 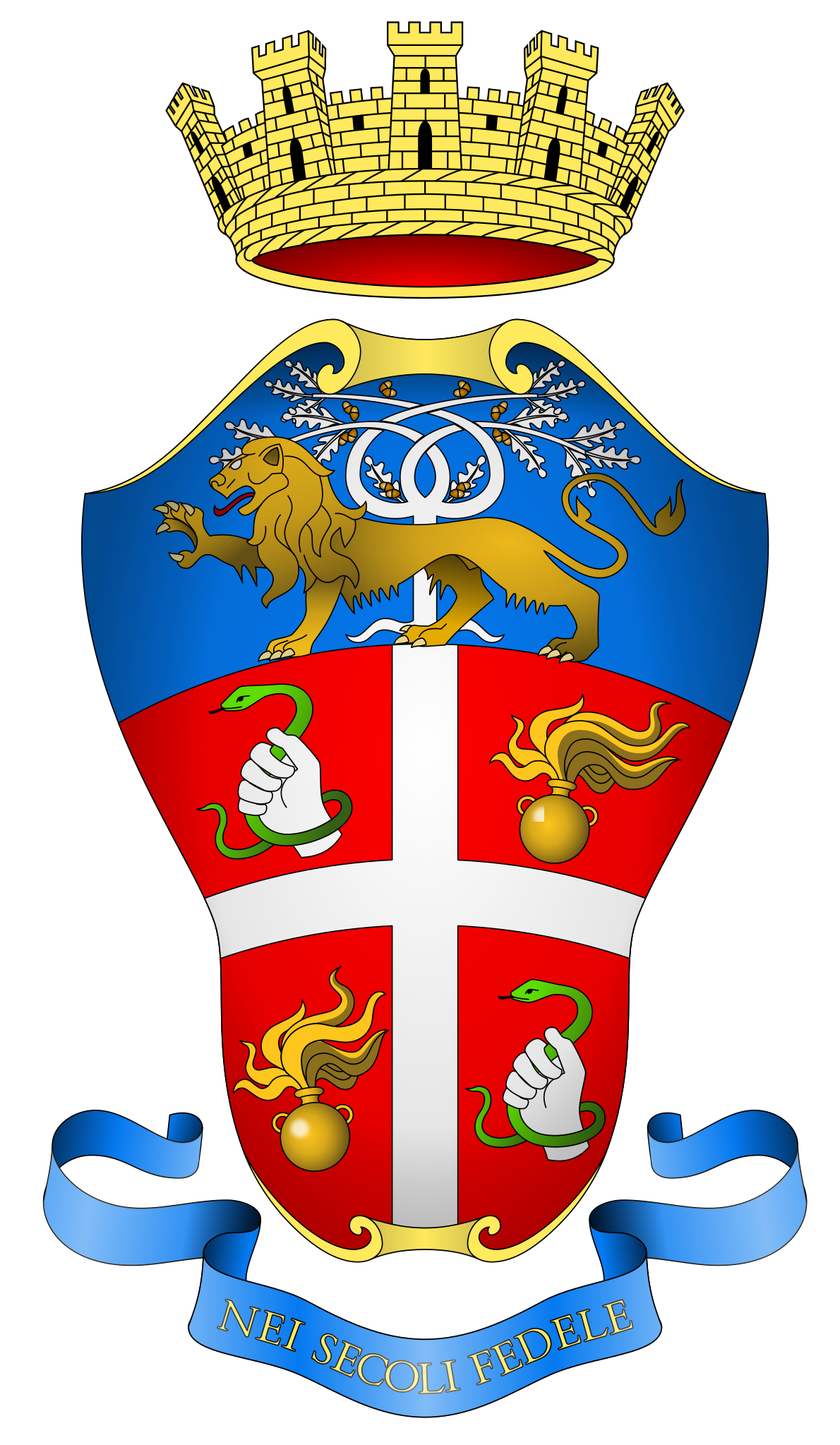