A Movement for Peace as Shown on Our Flag 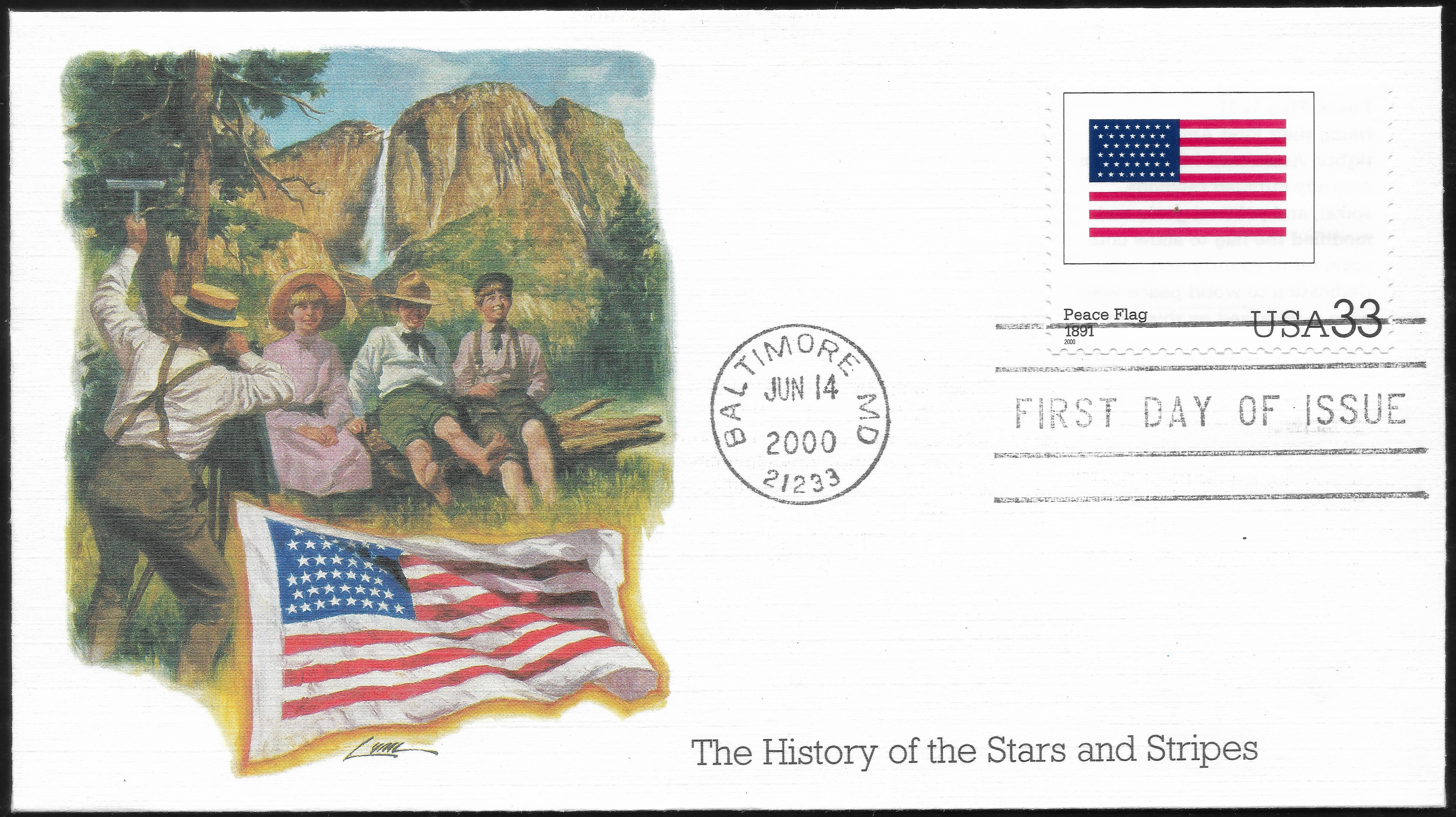 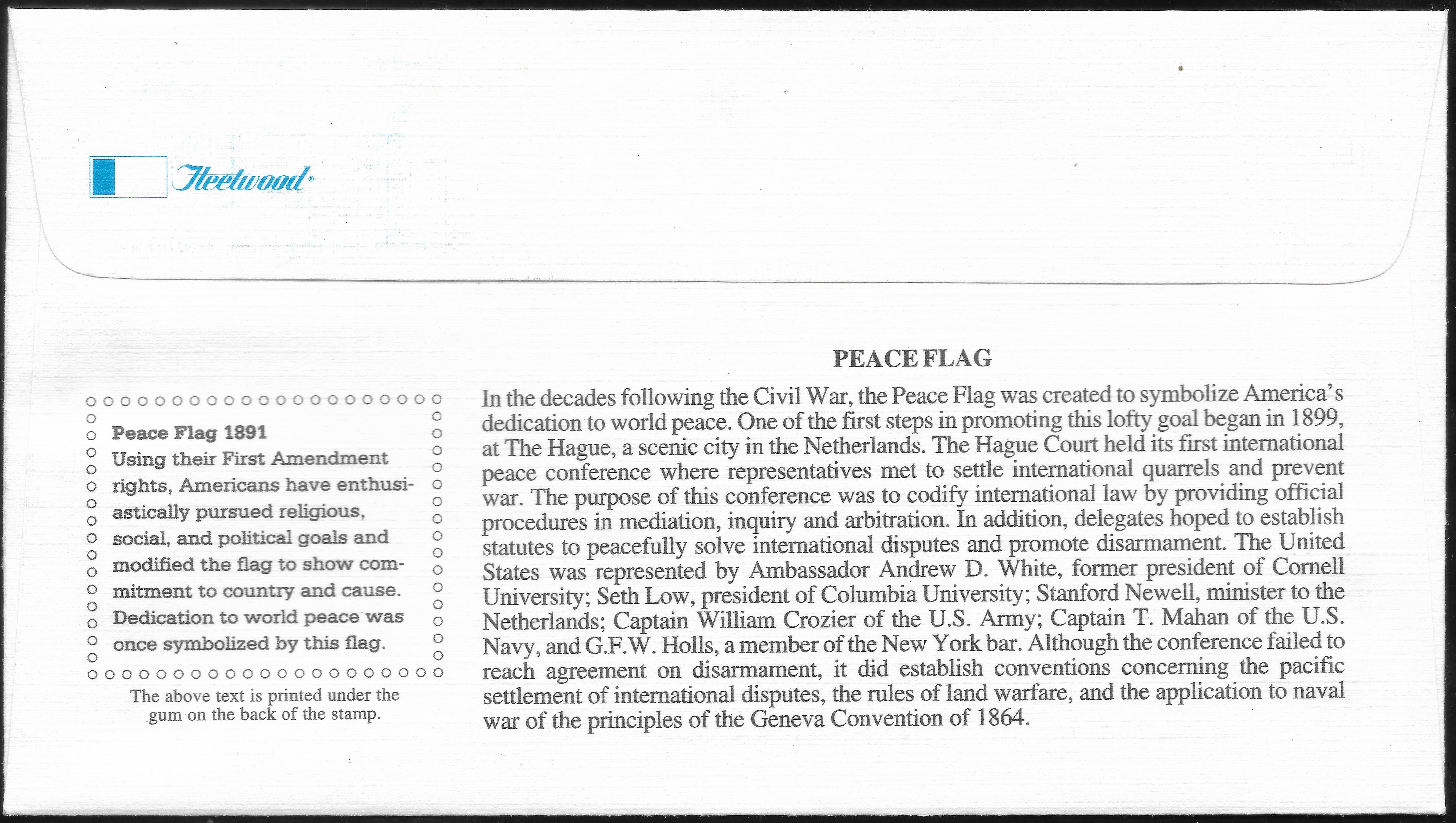 On 14 June 2000, the United States Postal Service issued a sheet of stamps depicting twenty different flags linked to the evolution of the Stars and Stripes from 1775 until the present day. According to Einar V. Dyhrkopp, chairman of the Postal Service Board of Governors at the time, “Our flag is a revered and sacred symbol of all that we, as citizens of this great nation, hold dear to our hearts — freedom and democracy. Old Glory is known the world over as the symbol of one of the greatest nations on Earth.”

The USPS press release announcing the stamps stated that the designs were chosen to provide a sampling of visually interesting and historically significant flags in U.S. history. Among the flags are the Continental Colors, and regional and military flags. The name of each flag either describes its design or places it in its historical context. Few of these flags have official names. The date on each stamp often reflected the most significant year in a flag’s history, not necessarily the year the flag was created.

“One of the world’s most powerful and widely recognized symbols, the United States flag has evolved over the past 200-plus years from a variety of local, regional, and national designs, including unofficial and semiofficial ones.

“These 20 examples, which are based on the most recent research available, offer a visual sampling of variations on a theme. For artistic consistency, flag widths have been made uniform, and the same shades of red and blue have been used throughout.“

Verso text appearied the back of the stamp pane provides a short explanation for each flag combining the most recent research available with historical anecdotes. A total of 4 million panes of 20 were printed by the Banknote Corporation of America using offset lithography and perforated 10½ x 11. The first day of issue city was Baltimore, Maryland, the home of Fort McHenry where Francis Scott Key observe the battle that led to his writing of the poem, “The Star-Spangled Banner.” The Scott catalogue assigned the number of 3403 to the entire pane and individual minor letters to each of the individual stamps. The “Peace Flag” stamp featured today is #3803r and the verso text can be seen on the rear of the Fleetwood first day cover depicted above.

It is a great set of stamps and I have covers for about half of them. Several of the included flags are ones that I had never come across before (and I consider myself to a bit of a “flag fan”). I had never heard of the Peace Flag of 1891 and it has the merest of mentions on Wikipedia, particularly compared to the pages dedicated to some of the other famous flags from United States history. Indeed, the Fleetwood cachet produced for this stamp provides more information.

The Wikipedia page only says this in an article dedicated to Peace Flags:

“In 1891, the third Universal Peace Congress in Rome devised a generalized Peace Flag design, which was simply the home nation’s flag bordered in white to signify non-violent conflict resolution. This was used (although not officially adopted) by the American Peace Society and the Universal Peace Union. It was designed by Henry Pettit.“

An image of a white-bordered version of what appears to be the 1777 Hopkinson flag with the added inscription in gold, “Peace for all Nations”, attached to a small stick-pin. This item came from the Swarthmore College Peace Collection and, according to Wikipedia, the design is “pre-1900.” A later version is seen in the postcard illustrated at the head of the article, from the collections of the Library of Congress.

According to articles held by the Mary Baker Eddy Library in Boston, Massachusetts, some originally published in The Christian Science Monitor, the idea of a “Peace Flag” was first proposed in 1891, at the third Universal Peace Congress in Rome. The Congress “devised a generalized Peace Flag design, which was simply the home nation’s flag bordered in white to signify non-violent conflict resolution.” This flag was used by both the American Peace Society (a pacifist group founded in 1828) and the Universal Peace Union (founded in 1866), but never officially adopted by either group. In 1905 The New York Times noted: “It is hoped that this white bordered flag will have a tendency to enlighten the people, and develop a sense of peace, justice, and liberty throughout the entire world.”

The flag in the Library’s collections was made in New York City, in the early 1900s. It is made of silk with a white border and trimmed in white fringe, measures 101 inches by 80 inches, and has 45 stars. The 45-star flag became the official United States flag on 4 July 1896 with a star added for the admission to the Union of Utah on 4 January that year. The 45-star flag was in use for 12 years, until 4 July 1908 with the addition of a star for the state of Oklahoma, admitted to the Union on 16 November 1907.

This flag was originally made for Dr. Robert S. Freedman, a New York physician active in pacifist circles. It was first displayed in Andrew Carnegie’s New York City home. A business magnate and philanthropist, Carnegie contributed $1,500,000 in 1903 for the erection of the Peace Palace at The Hague.” The flag then moved around different locations in Washington D.C., including one peace meeting.

The Peace Flag was used as a symbol of peace and of national commitment to the peace movement. For example, Dr. Freedman telegraphed Alfred H. Love, a well-known peace activist and president of the Universal Peace Union in Philadelphia, asking to see the flag. They both took it to the Betsy Ross display in Philadelphia and laid it on the chair of this legendary maker of the first American flag. Next it was laid on the grave of Benjamin Franklin while a prayer was said. The flag was also taken for a series of tours around England.

When the Peace Flag returned to the United States, it went to the St. Louis Interparliamentary Union Conference in 1904, and then returned to New York City for a meeting of the Federation of Christian Churches. From there it went on display at a Quaker peace meeting, “at which the history of the International Peace Movement was discussed.”

In early April 1907, Mary Baker Eddy received a letter from Augusta E. Stetson of First Church of Christ, Scientist, New York City, about the National Arbitration and Peace Congress, to be held in New York April 14-17. Stetson went on to say the executive committee had asked churches to hold services on Sunday evening 14 April, to familiarize people with the aim and purpose of the congress. Meetings to support the congress were held in The Mother Church in Boston, as well as in several Christian Science churches in New York City. The 20 April Christian Science Sentinel reported that the Boston meeting, “which was presided over by Rev. William P. McKenzie, was a success in every way. The large auditorium, with a seating capacity of five thousand, was completely filled before the meeting opened at half past seven, and fully a thousand persons stood throughout the exercises” – a good indication of local interest in peace movements.

A week earlier, in an editorial in the 13 April Sentinel, Editor Archibald McLellan had noted that Eddy was “deeply interested” in the subject of peace, saying that “she has pointed to obedience to the First Commandment, ‘Thou shalt have no other gods before me,’ as the means for universal peace and salvation.” He also mentioned that William McCrackan, First Reader of The Mother Church, would officially represent the Church at the congress.

After the conclusion of the Peace Congress in late April, Stetson presented what is now the Library’s Peace Flag to Mary Baker Eddy. The records are not entirely clear as to how Stetson obtained the flag. A number of Christian Scientists were involved in the Peace Congress, and several of them were members of First Church of Christ, Scientist, New York City – Stetson’s church. In fact, during the Peace Congress Andrew Carnegie was recognized for his great support of the movement and presented with one of the two peace flags that hung behind the podium during the sessions. It was presented to him by Helen Beach Tillotson and Richmond P. Hobson, of the National Society of the Daughters of the American Revolution. Tillotson, a Christian Scientist, was likely involved in donating the remaining flag to Eddy.

Quickly deciding to give the flag to her church, Eddy said she felt “that the flag should become the property of all the Christian Science churches, through being branches of the Mother Church.” The Christian Science Board of Directors wrote to Eddy to thank her for it: “The Directors have received the Peace Flag which you so kindly sent to them to be held by The Mother Church for all the branch churches. They thank you for this memorable, beautiful flag, and for your loving words which accompanied it.”

Not until some years later – shortly before the Church’s Annual Meeting in the spring of 1936 – did the Christian Science Board of Directors and the Trustees of The Christian Science Publishing Society decide to hang the flag in the Publishing House. Their initial thought was to hang the flag downstairs, near the Mapparium. They consulted with Chester Lindsay Churchill, the architect of the Publishing House, and he recommended hanging it in the “…mezzanine on the blank wall between the elevators and the library, centered between the archway and directly over the memorial [tablet] to Mrs. Eddy below.” The Peace Flag was installed in a bronze, dustproof case made by the Gorham Company of Providence, RI. Today it still hangs on the second floor mezzanine, above the Publishing House Lobby in the Mary Baker Eddy Library.