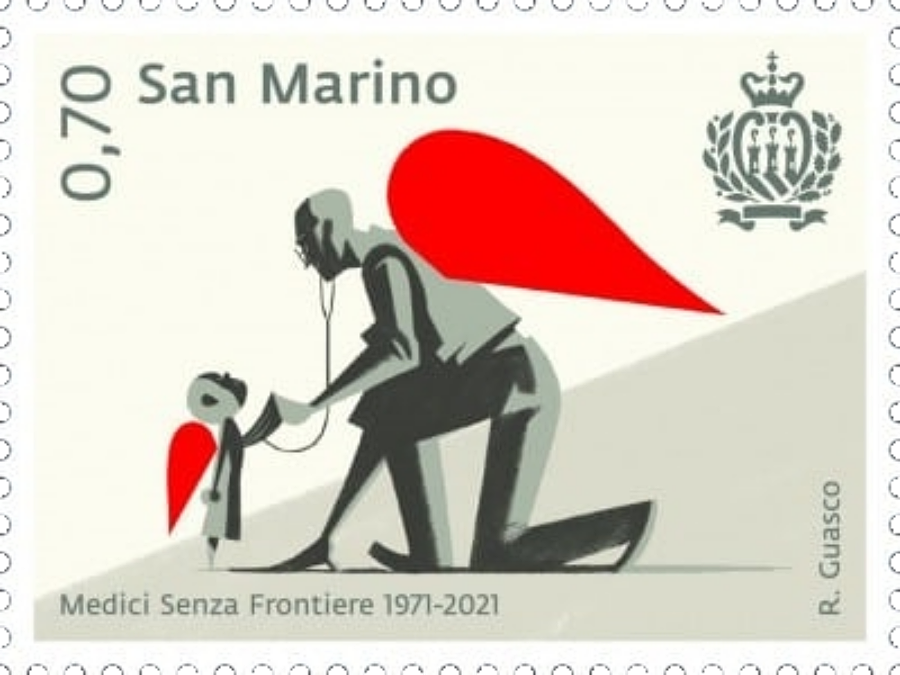 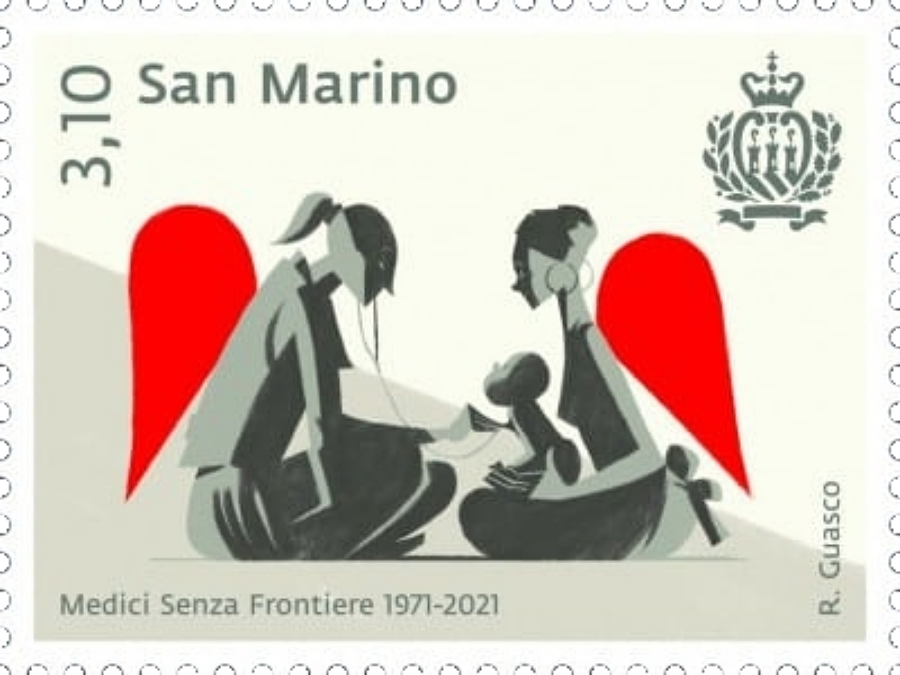 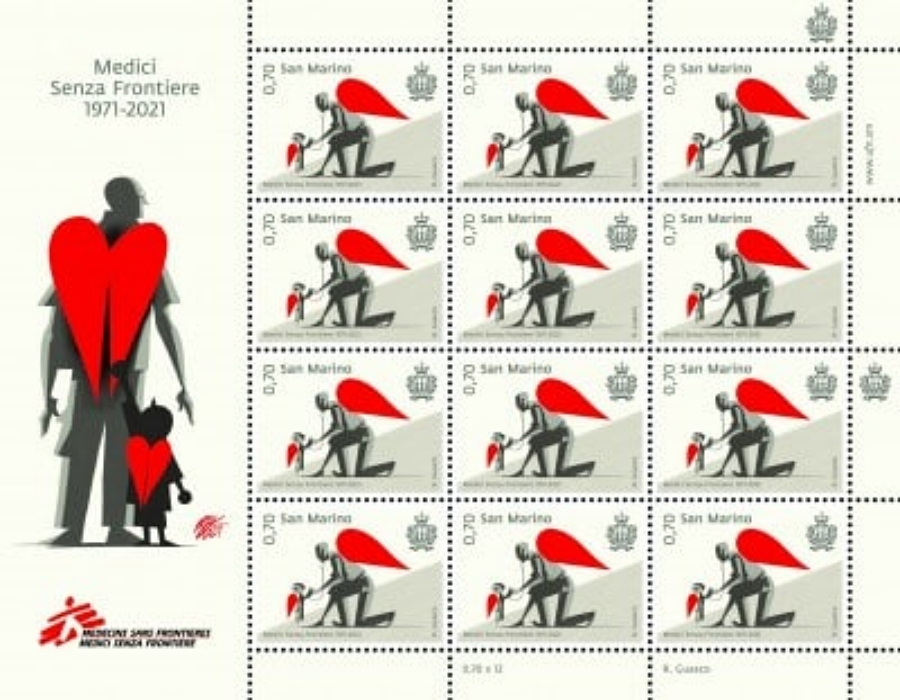 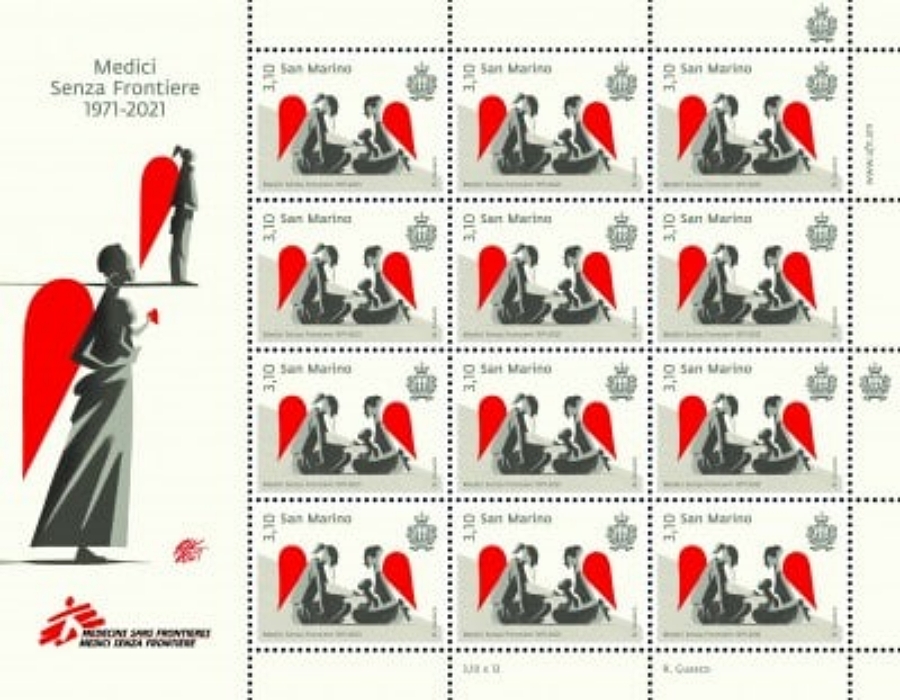 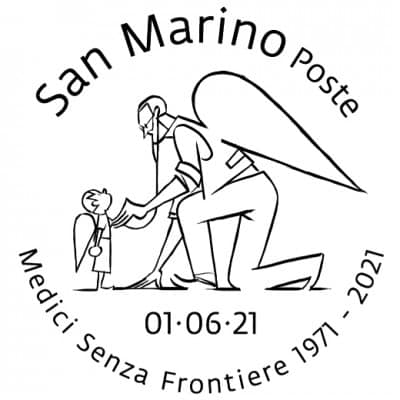 The postal series commemorates the 50th anniversary of the foundation of Doctors without Borders, an international non-governmental organization, founded in 1971 in Paris by doctors and journalists awarded in 1999 with the Nobel Prize for Peace and committed worldwide. The designer has put at the centre of the illustrations what for 50 years has been the centre of this association: human beings and their care, choosing to bring help and intervening where it is more difficult, simply listening to a beating heart.

Médecins Sans Frontières. sometimes rendered in English as Doctors Without Borders, is an international humanitarian medical non-governmental organization (NGO) of French origin best known for its projects in conflict zones and in countries affected by endemic diseases. In 2019, the group was active in 70 countries with over 35,000 personnel mostly local doctors, nurses and other medical professionals, logistical experts, water and sanitation engineers and administrators. Private donors provide about 90% of the organization’s funding, while corporate donations provide the rest, giving MSF an annual budget of approximately US$1.63 billion.

Médecins Sans Frontières was founded in 1971, in the aftermath of the Biafra secession, by a small group of French doctors and journalists who sought to expand accessibility to medical care across national boundaries and irrespective of race, religion, creed or political affiliation. To that end, the organization emphasizes “independence and impartiality”, and explicitly precludes political, economic, or religious factors in its decision making. For these reasons, it limits the amount of funding received from governments or intergovernmental organizations. These principles have allowed MSF to speak freely with respect to acts of war, corruption, or other hindrances to medical care or human well-being. Only once in its history, during the 1994 genocide in Rwanda, has the organization called for military intervention.

MSF’s principles and operational guidelines are highlighted in its Charter, the Chantilly Principles, and the later La Mancha Agreement. Governance is addressed in Section 2 of the Rules portion of this final document. MSF has an associative structure, where operational decisions are made, largely independently, by the five operational centres (Amsterdam, Barcelona-Athens, Brussels, Geneva and Paris). Common policies on core issues are coordinated by the International Council, in which each of the 24 sections (national offices) is represented. The International Council meets in Geneva, Switzerland, where the International Office, which coordinates international activities common to the operational centres, is also based.

MSF has general consultative status with the United Nations Economic and Social Council. It received the 1999 Nobel Peace Prize in recognition of its members’ continued efforts to provide medical care in acute crises, as well as raising international awareness of potential humanitarian disasters. James Orbinski, who was the president of the organization at the time, accepted the prize on behalf of MSF. Prior to this, MSF also received the 1996 Seoul Peace Prize. Christos Christou succeeded Joanne Liu as international president in June 2019.