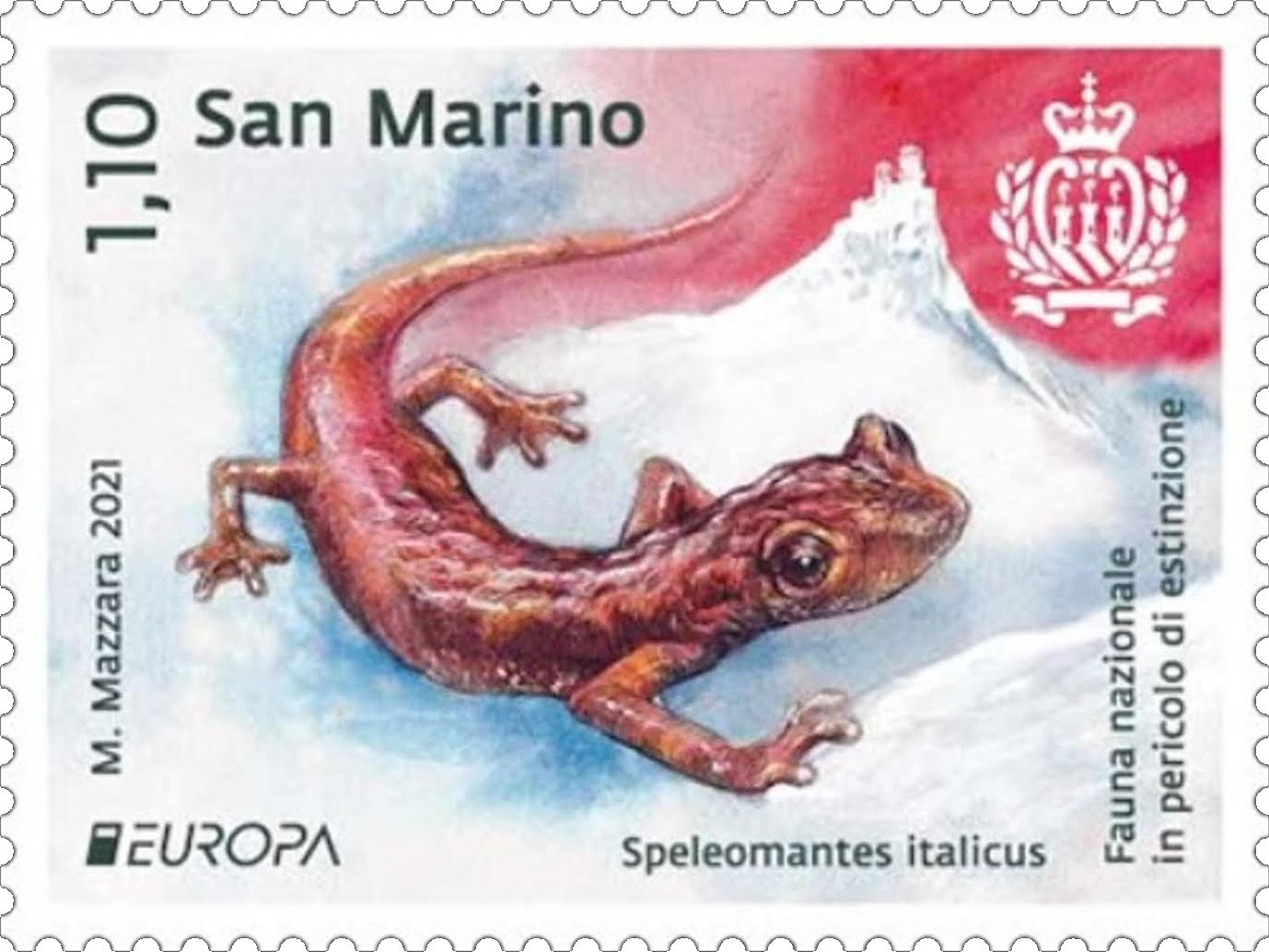 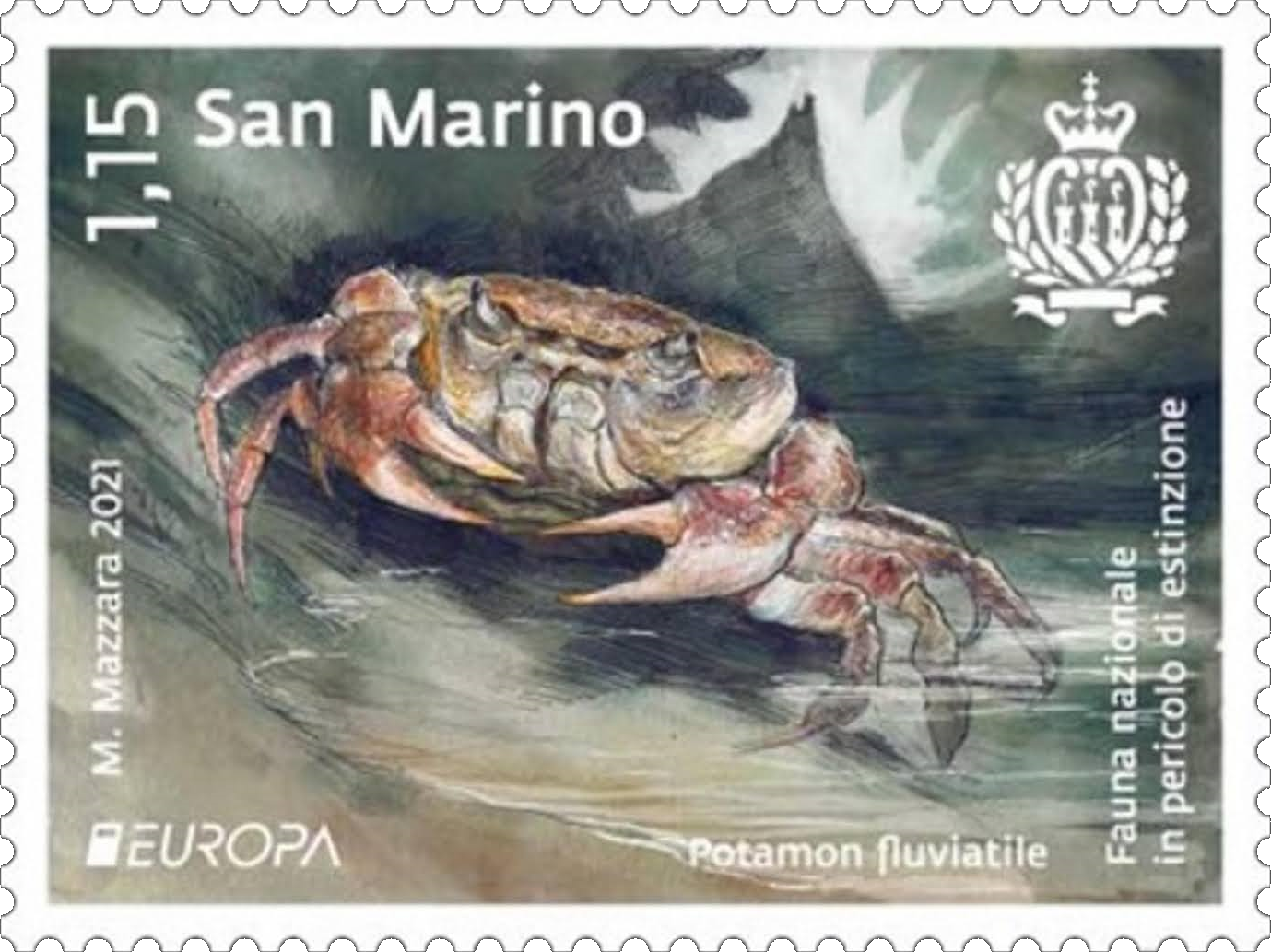 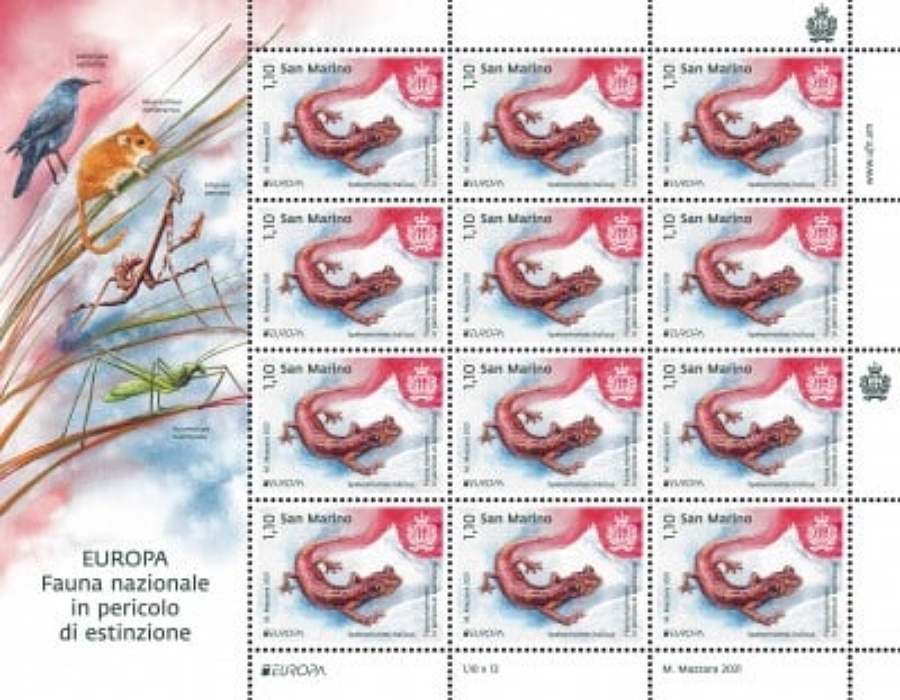 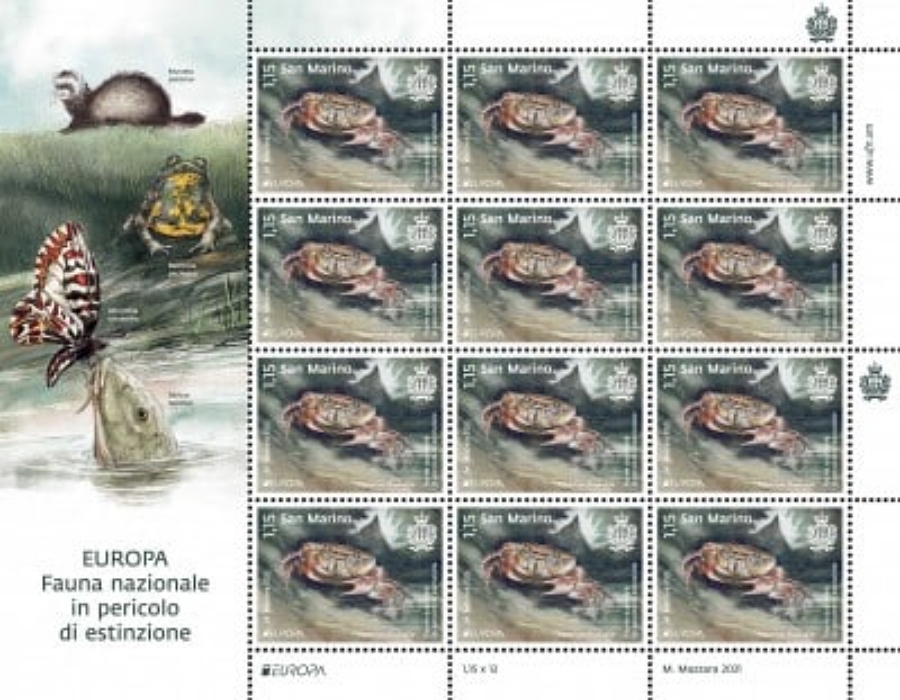 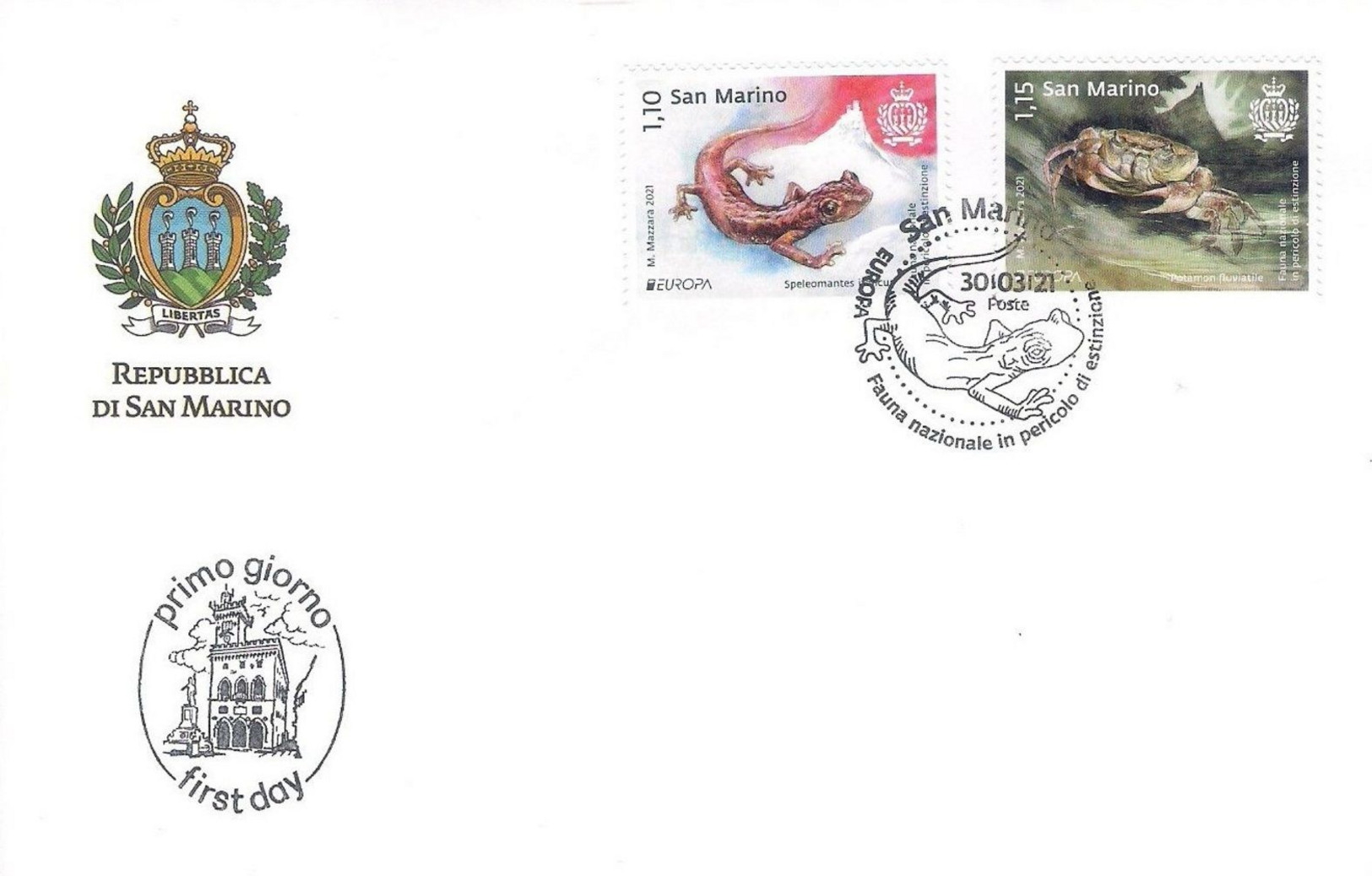 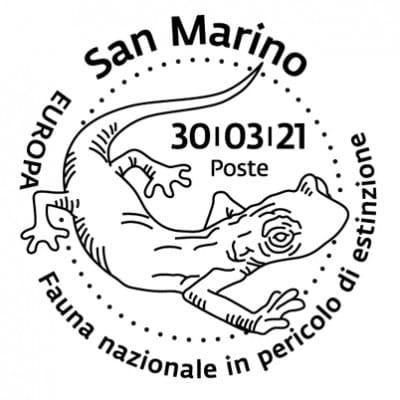 The Europa 2021 postal series is dedicated to the rare and endangered wildlife of San Marino. The stamp depicts the Geotritone (Speleomantes italicus), a small amphibian that lives in the cracks of the rocks of Monte Titano, and the First Tower in the background. The following endangered species are portrayed on the strip on the left side of the sheet: the sparrow Monticola Solitarius, the small rodent Moscardinus, the rare mantis Empusa Pennata and the grasshopper Acrometopa Macropoda. 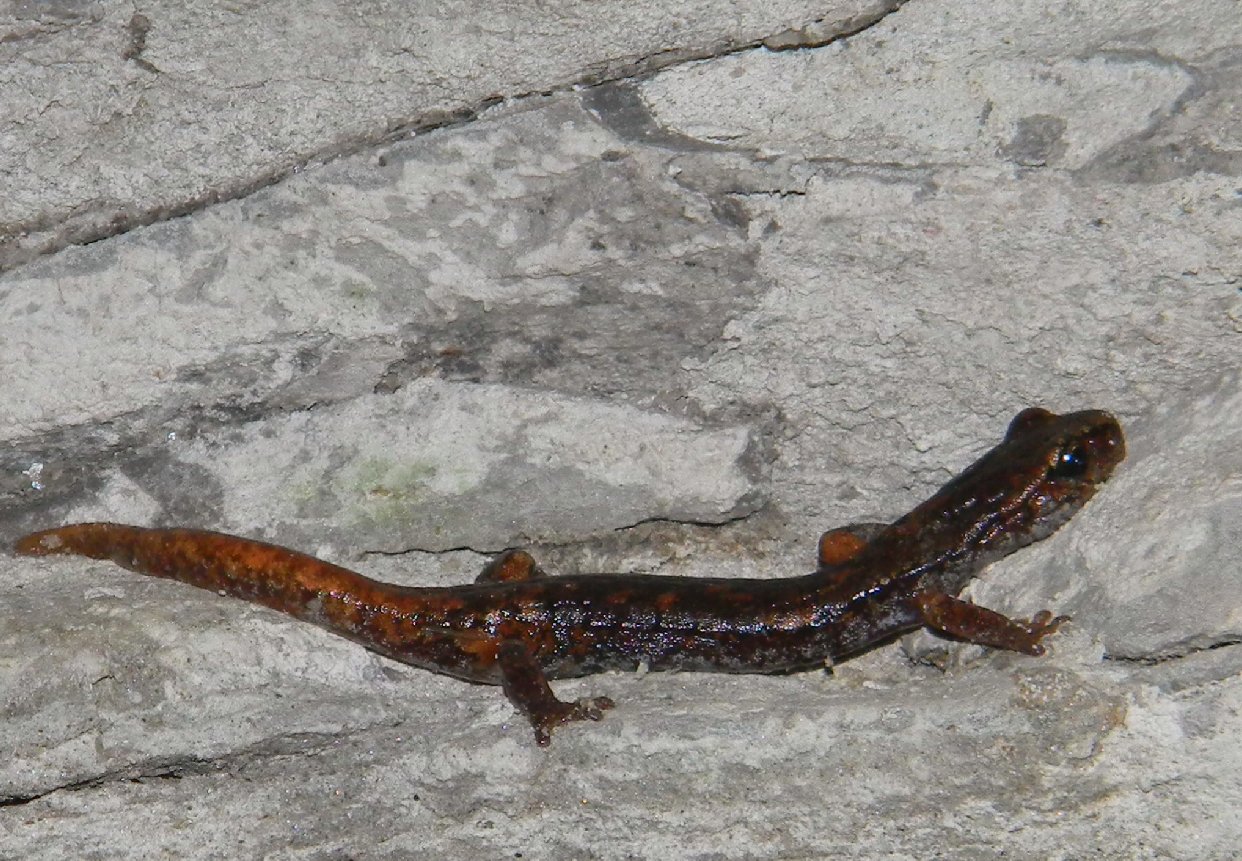 The Italian cave salamander (Speleomantes italicus) is a species of salamander in the family Plethodontidae. Endemic to Italy, its natural habitats are temperate forests, rocky areas, caves, and subterranean habitats (other than caves). It is threatened by habitat loss.

The Italian cave salamander is a slender species with short limbs and grows to a length of about 12.5 cm (5 in) including a short tail. The head is broad with prominent eyes and there is a distinct groove between the nostrils and the edge of the lips. The feet are partially webbed. It is dark in colour with mottled reddish or yellowish markings and a dark belly. In the north of its range it is more variable in colour and sometimes hybridises with Ambrosi’s cave salamander (Speleomantes ambrosii).

The Italian cave salamander is native to northern Italy where it is found in the northern and central Apennine Mountains. Its range extends from the Province of Lucca and Province of Reggio Emilia southwards to the Province of Pescara. It is found in wooded valleys, on rocky outcrops and in caves and underground waters, often in limestone areas, at altitudes of up to 1,600 metres (5,200 ft) above sea level.

The Italian cave salamander is usually found in areas of limestone rock, but sometimes in sandstone or ophiolitic areas. It is agile, climbing on cave walls and rocky outcrops. The female lays a small clutch of eggs in a crevice and these hatch by direct development into miniature salamanders.

The International Union for the Conservation of Nature has assessed the Italian cave salamander as being “near threatened”. This is on the basis that, although it is common over much of its range, its total extent of occurrence is less than 20,000 square kilometres (7,700 sq mi) and suitable habitat may be declining locally. 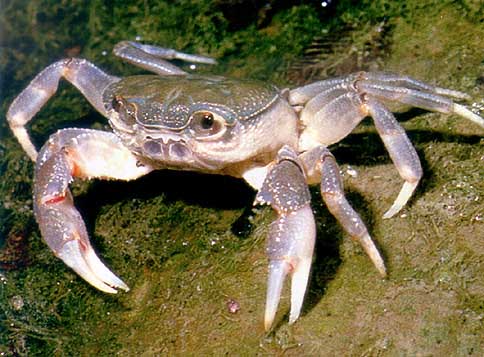 Potamon fluviatile is a freshwater crab found in or near wooded streams, rivers and lakes in Southern Europe. It is an omnivore with broad ecological tolerances, and adults typically reach 50 mm (2 in) in size during their 10–12 year lifespan. They inhabit burrows and are aggressive, apparently outcompeting native crayfish.

P. fluviatile has been harvested for food since classical antiquity, and is now threatened by overexploitation. Many of the island populations are particularly vulnerable, and the Maltese subspecies has become a conservation icon. A population in Rome may have been brought there before the founding of the Roman Empire.

Adult Potamon fluviatile may reach a carapace length of 50 millimetres (2.0 in), with females being generally smaller than males. As with other crabs, the body is roughly square, with the reduced abdomen tucked beneath the thorax. The thorax bears five pairs of legs, the first of which is armed with large claws.

The life span of P. fluviatile is typically 10–12 years. Molting does not occur in winter. Mating lasts between 30 min and 21 hours, with spawning usually taking place in August. Females carry the eggs on their pleopods (appendages on the abdomen) until they hatch directly into juvenile crabs, having passed through the larval stages inside the egg.

Potamon fluviatile is edible, as indicated by its alternative specific epithet edulis, and was known to the ancient Greeks; it is probably this species which they depicted on medals found at Agrigento, Sicily. More recently, the species was depicted on the 5¢ coin in the last series of Maltese coins before the introduction of the Euro there in 2007.