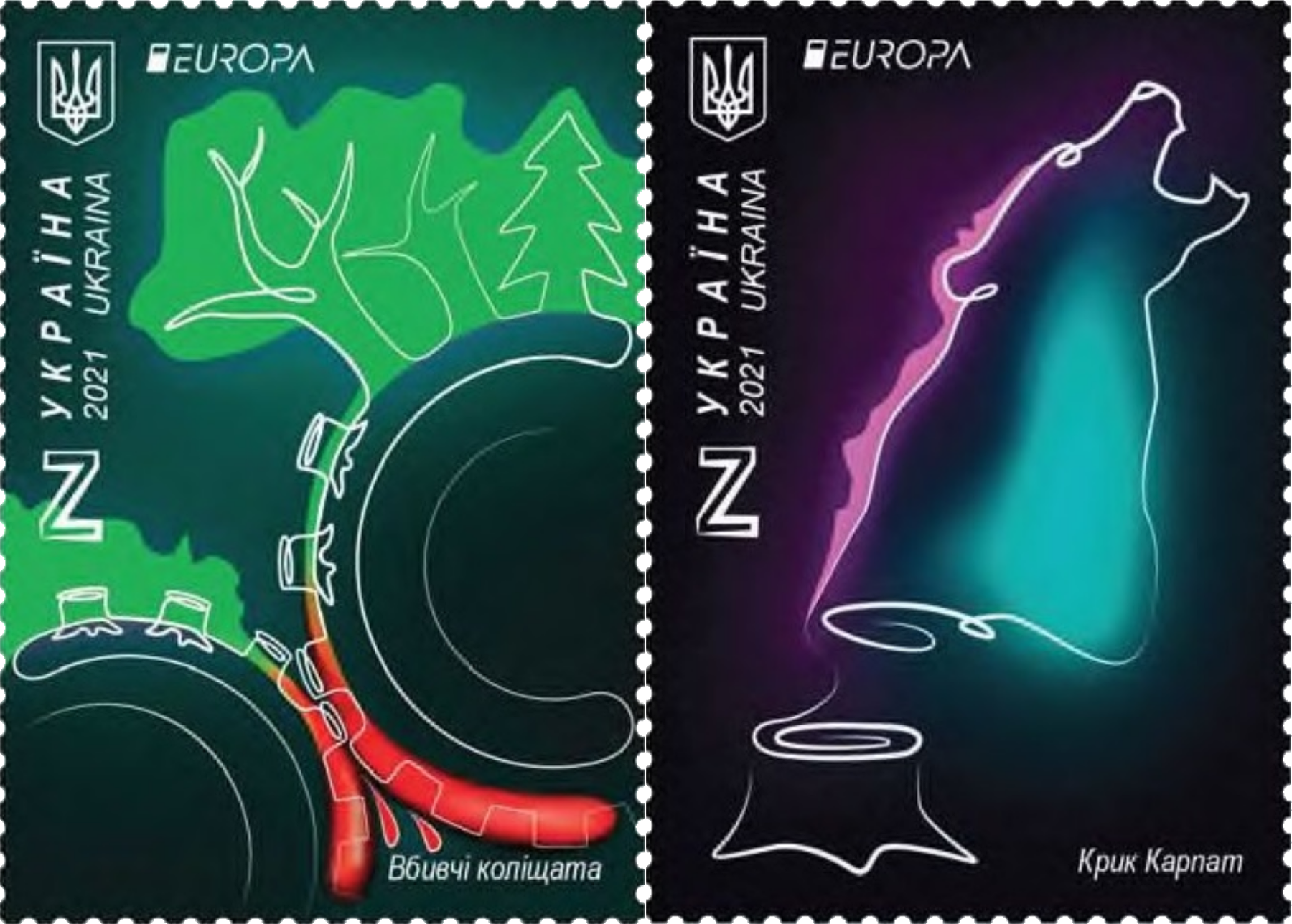 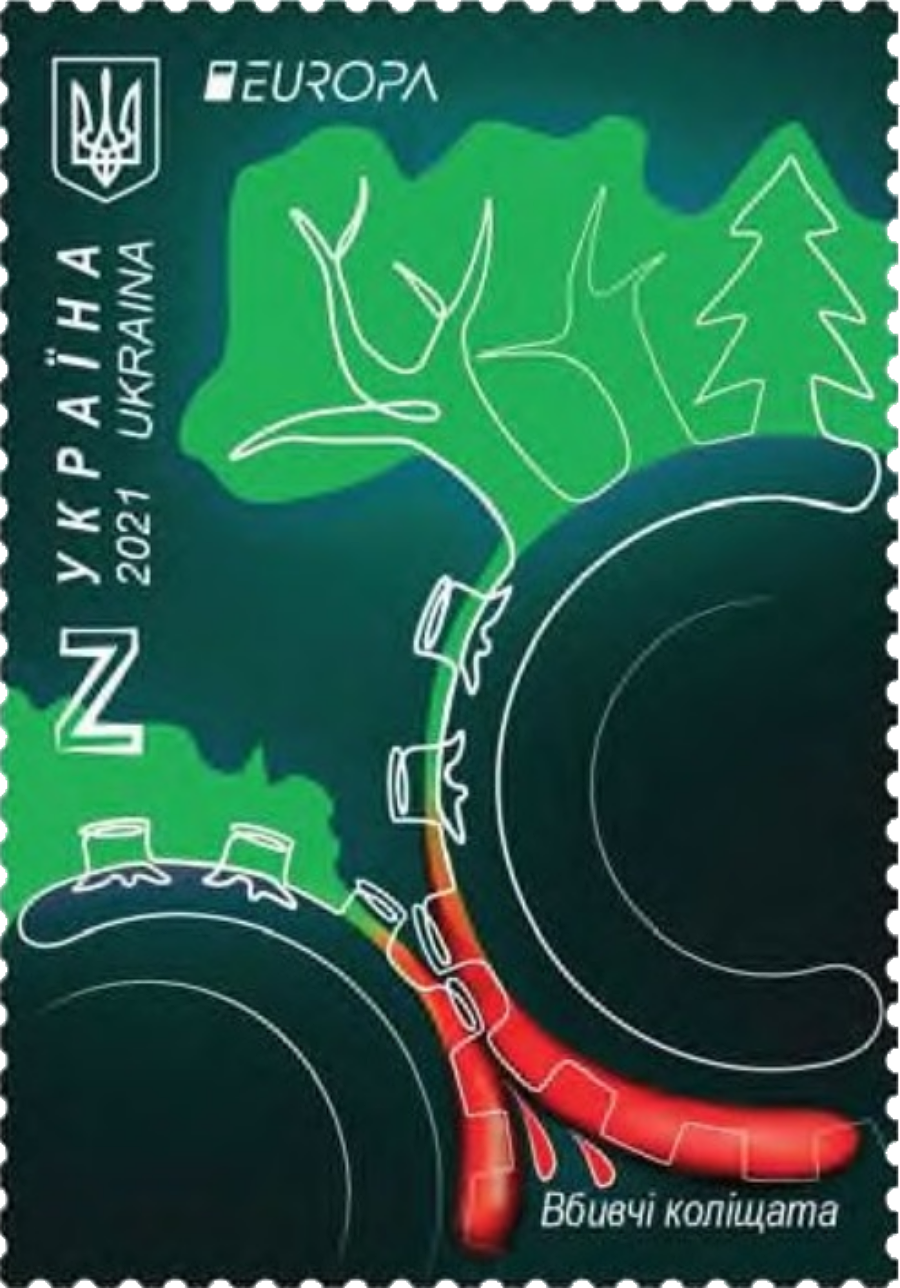 Design #2: “Cry of the Carpathians” 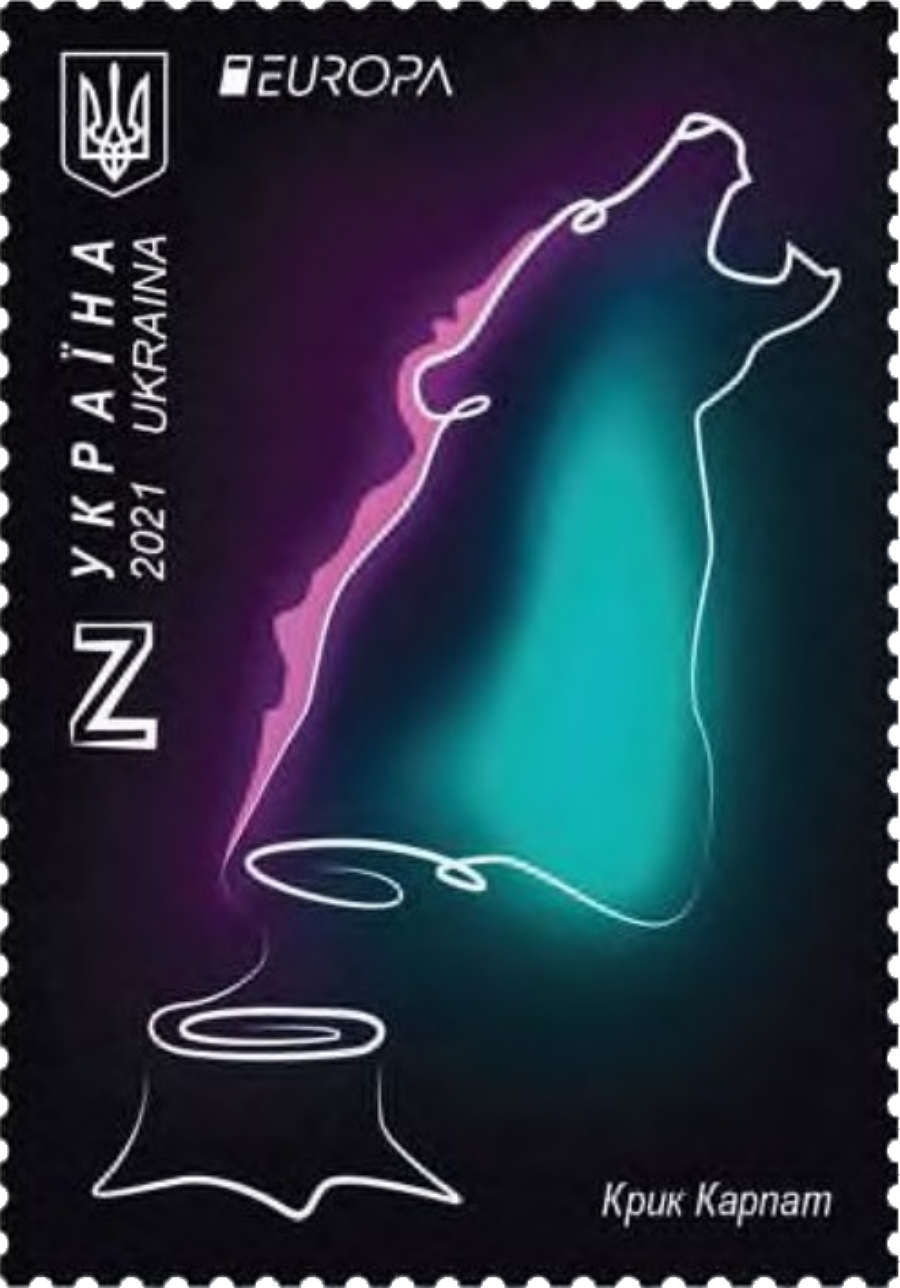 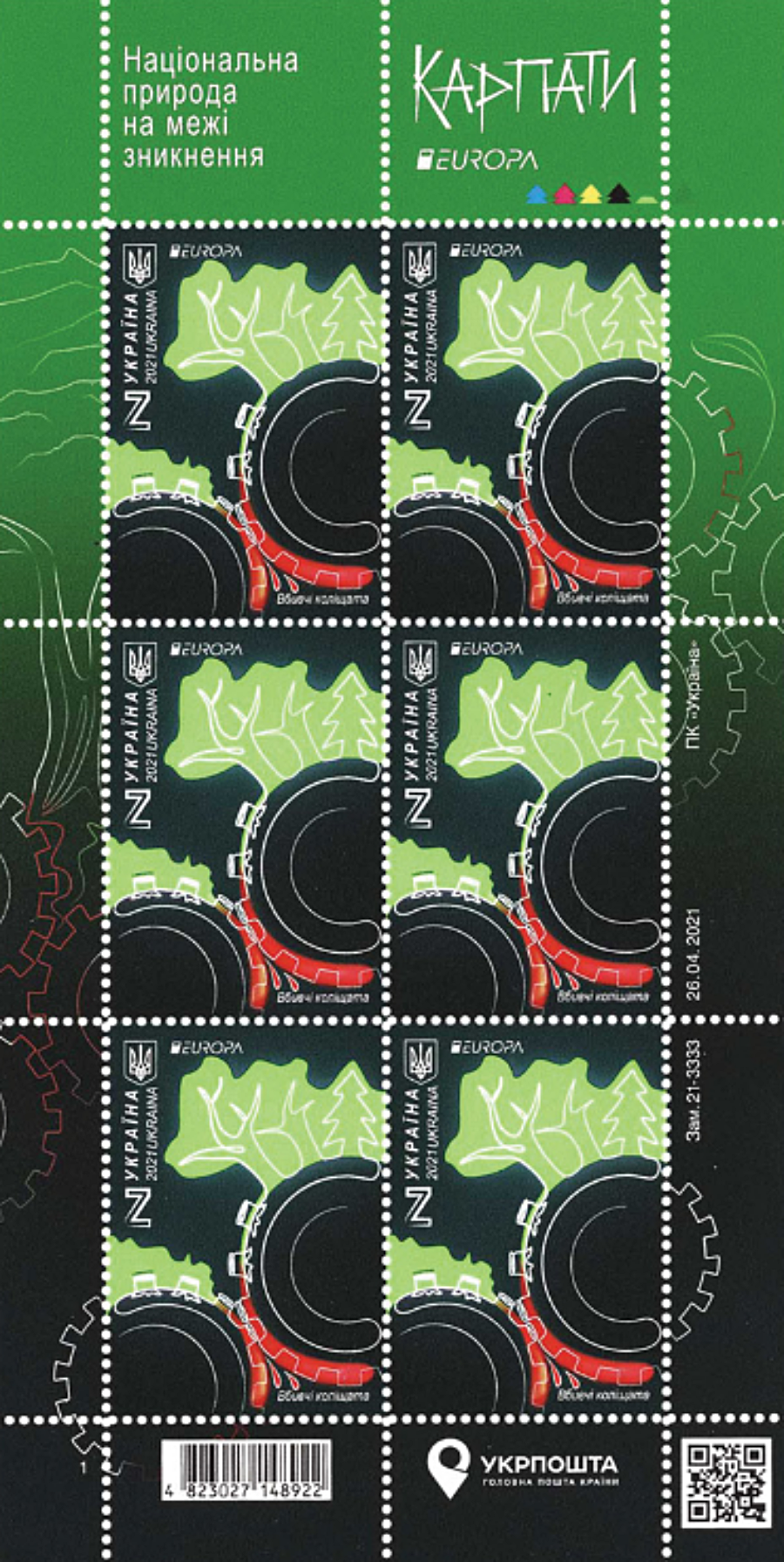 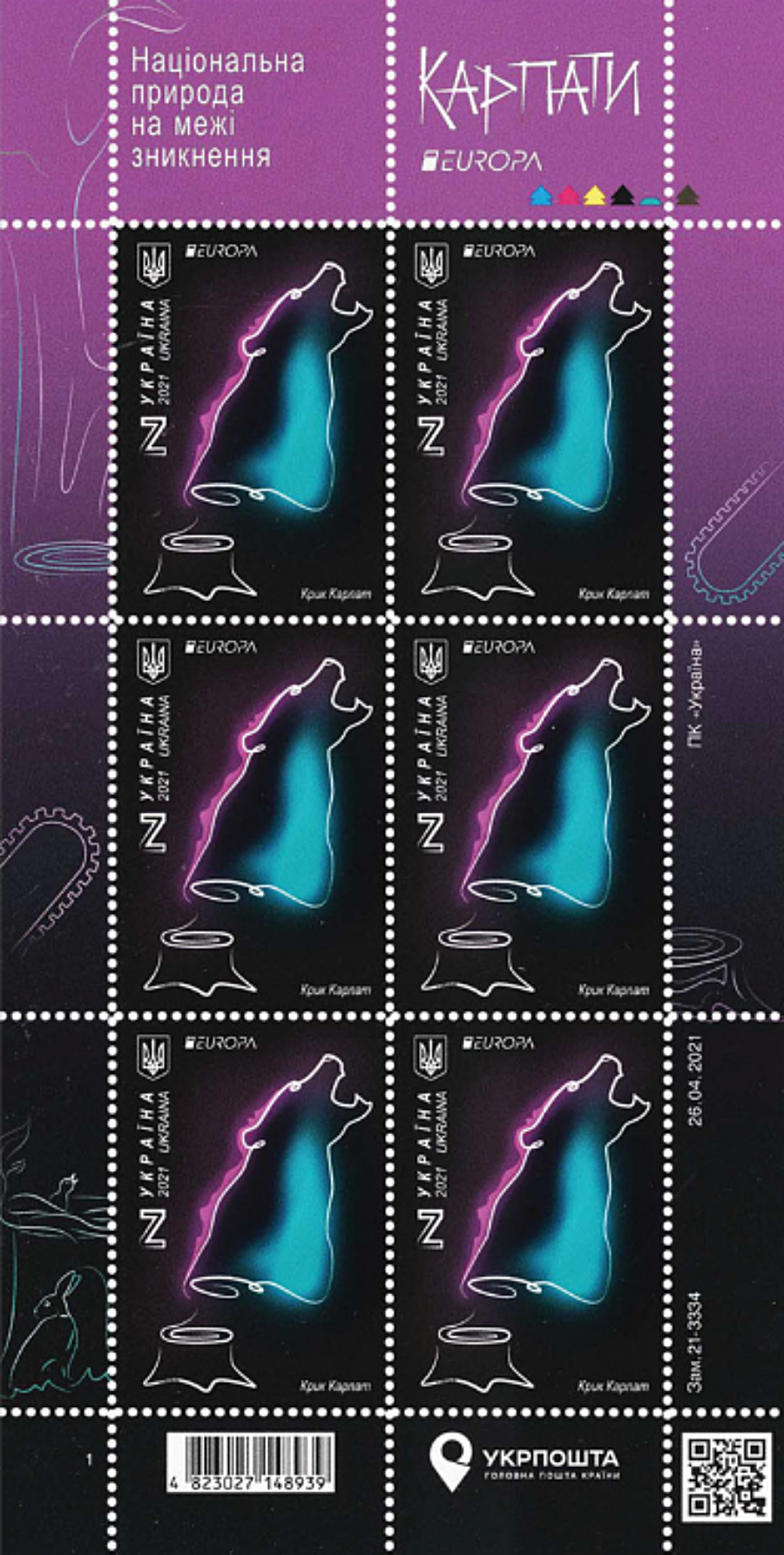 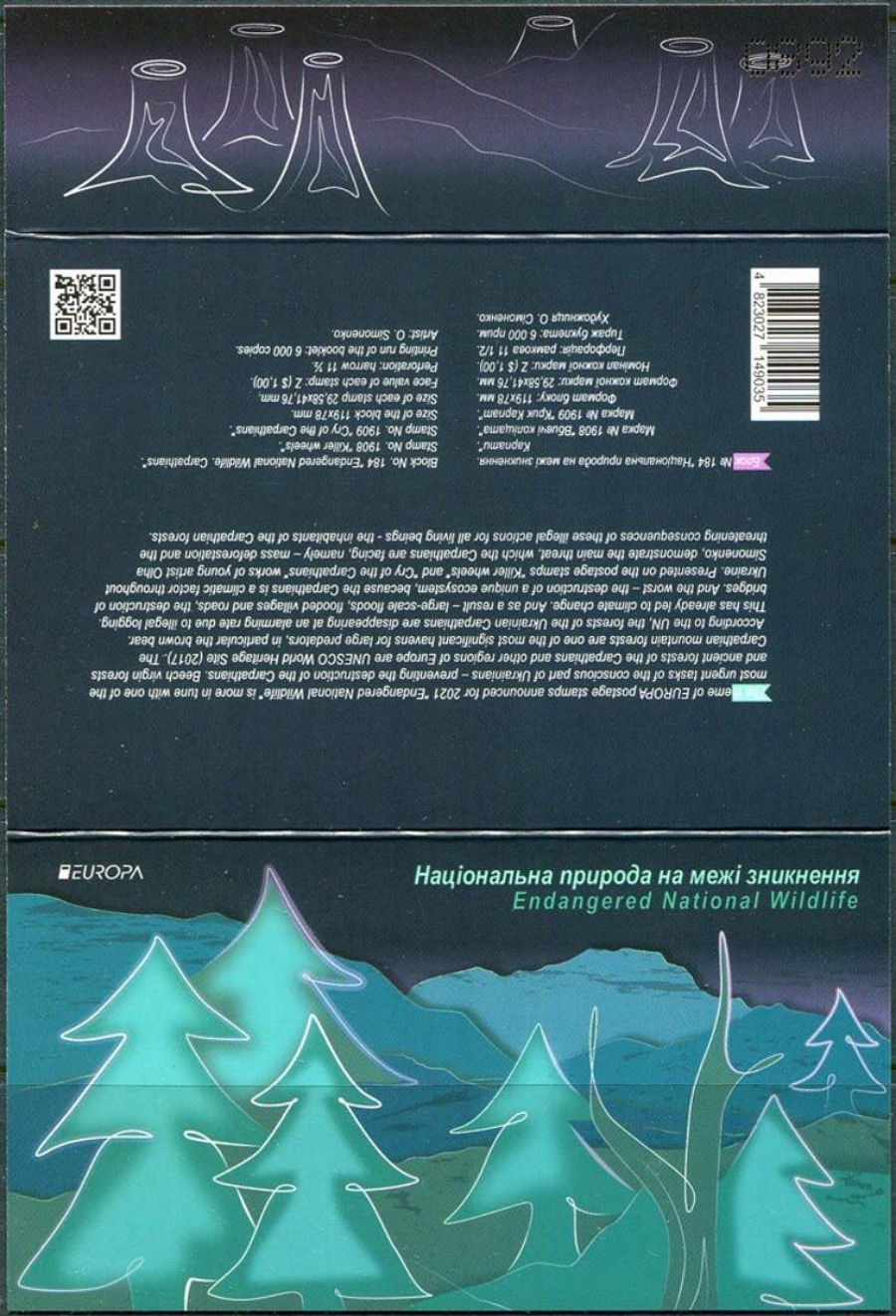 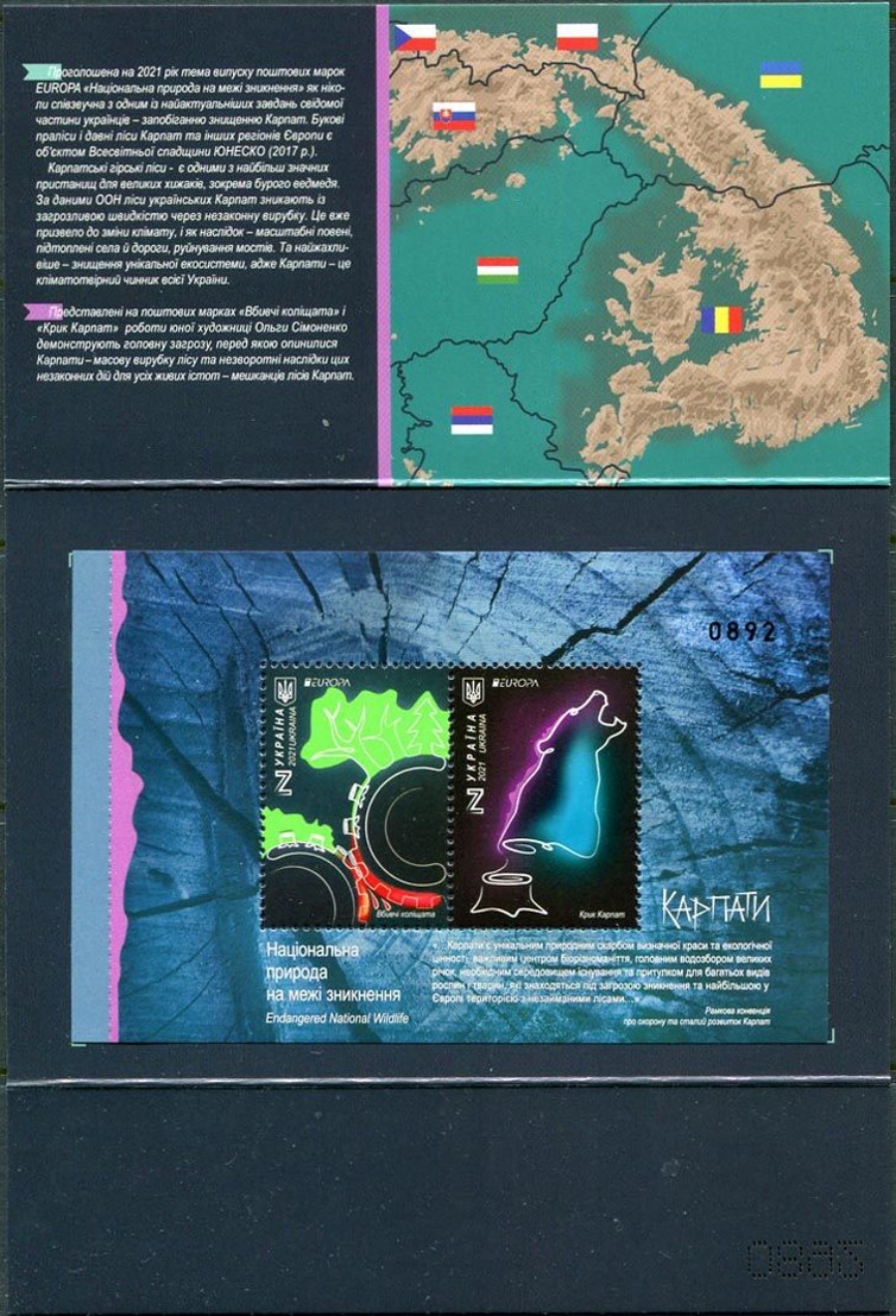 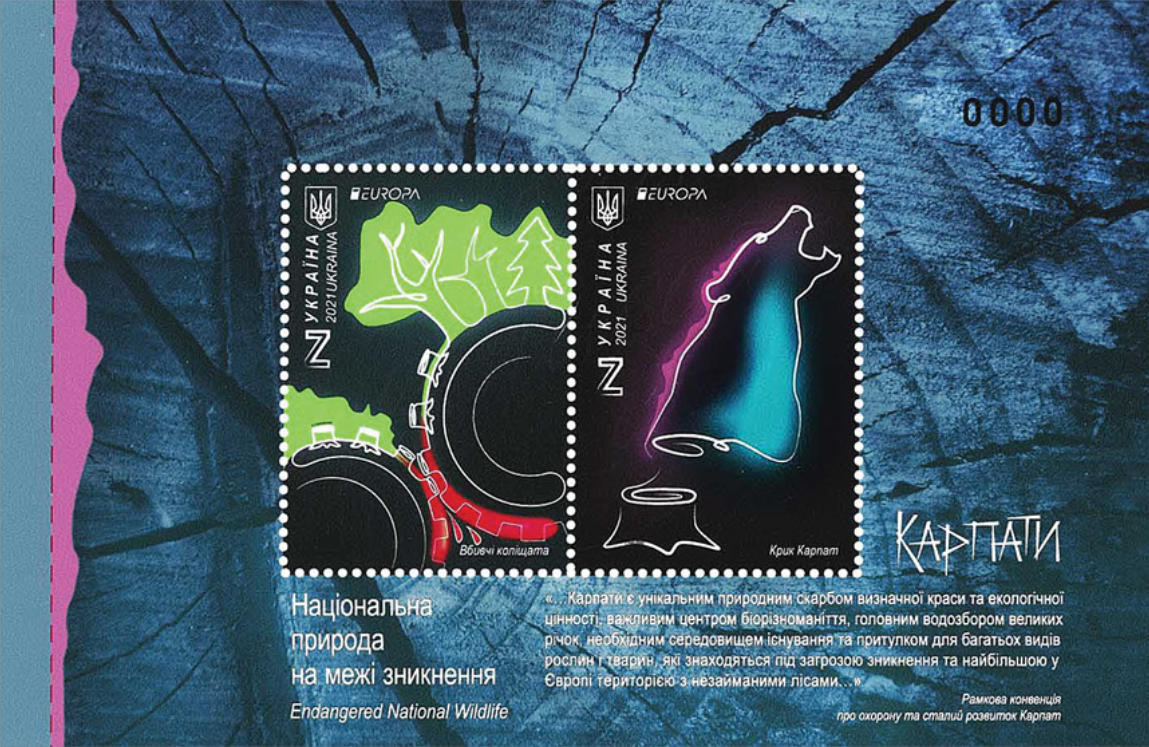 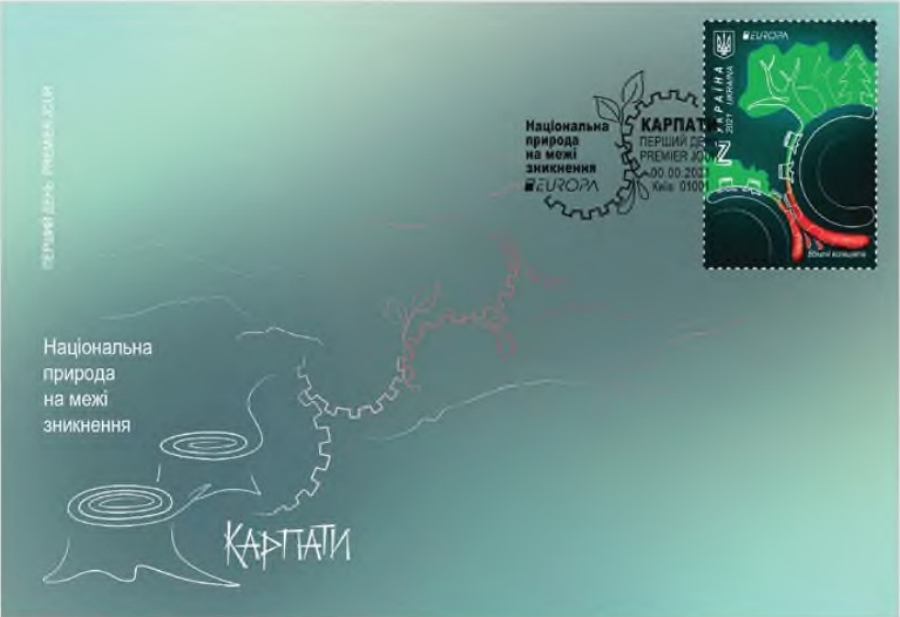 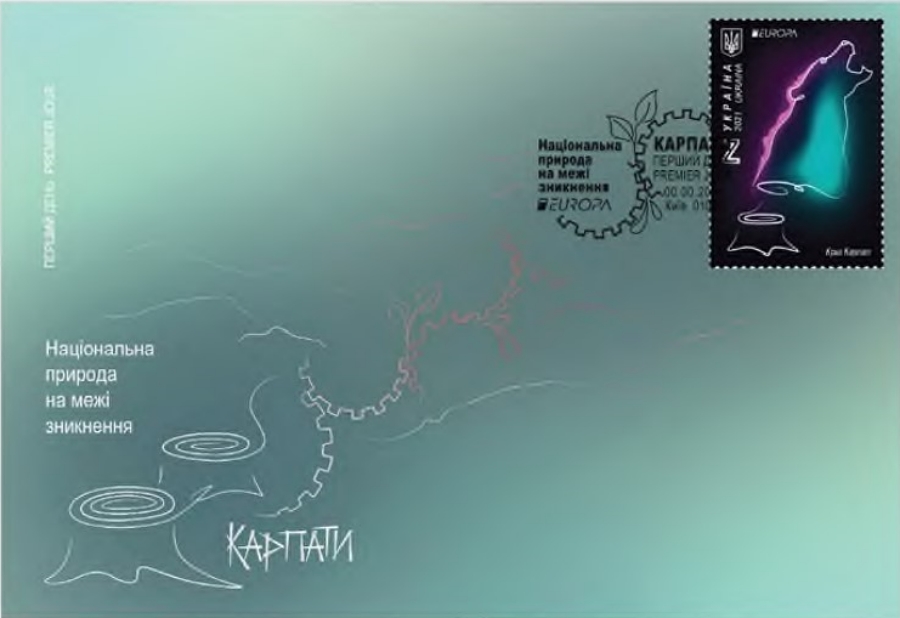 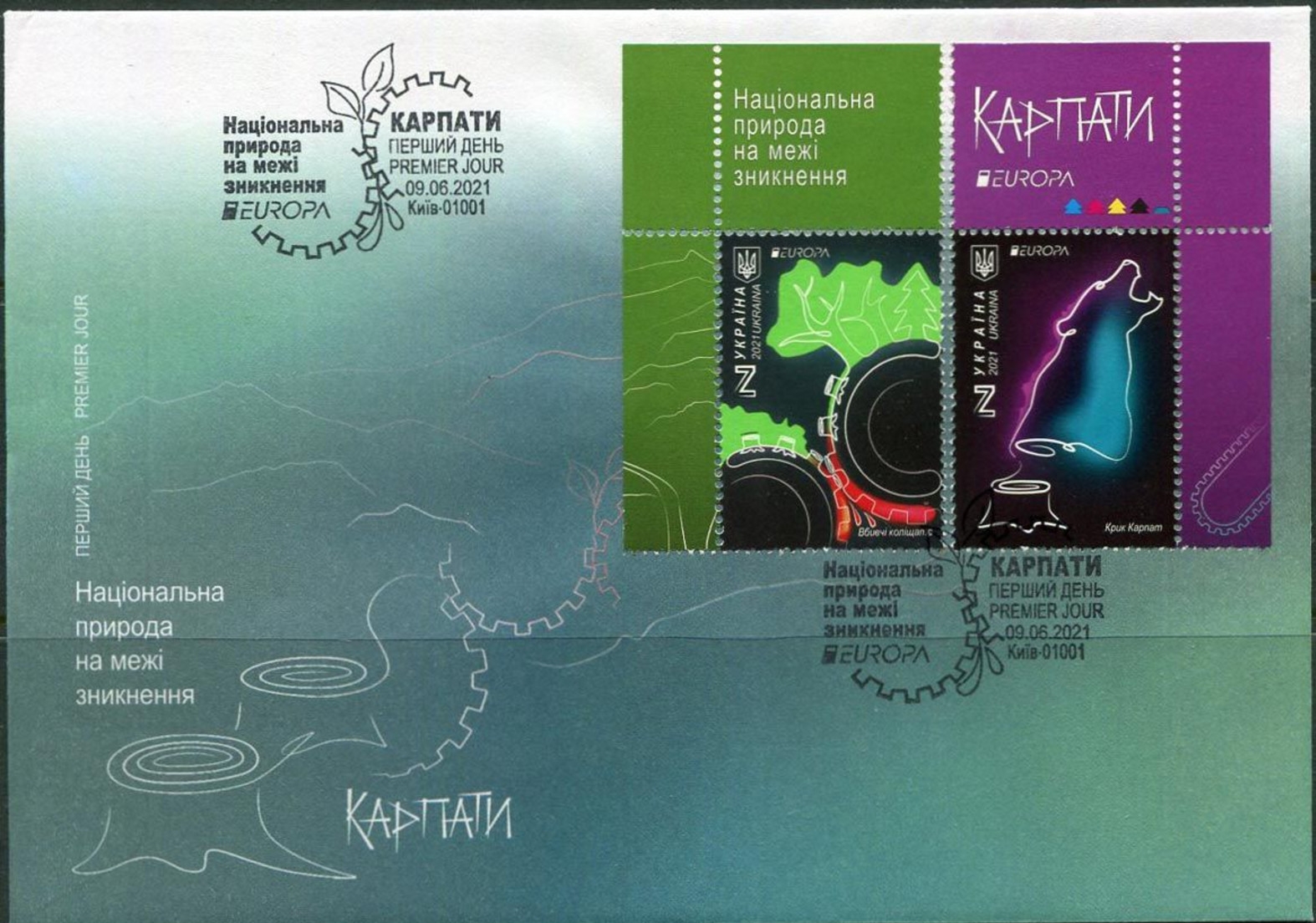 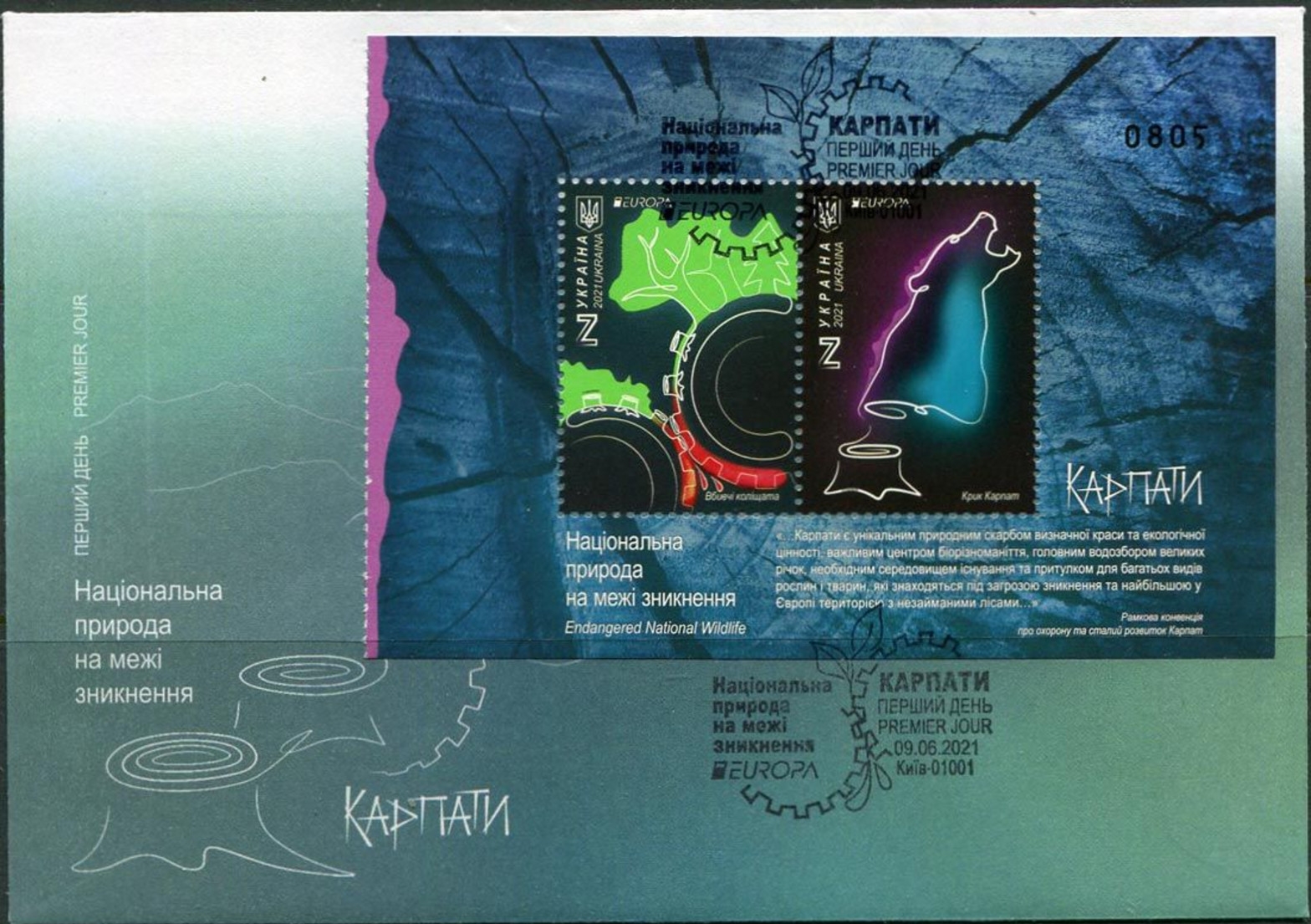 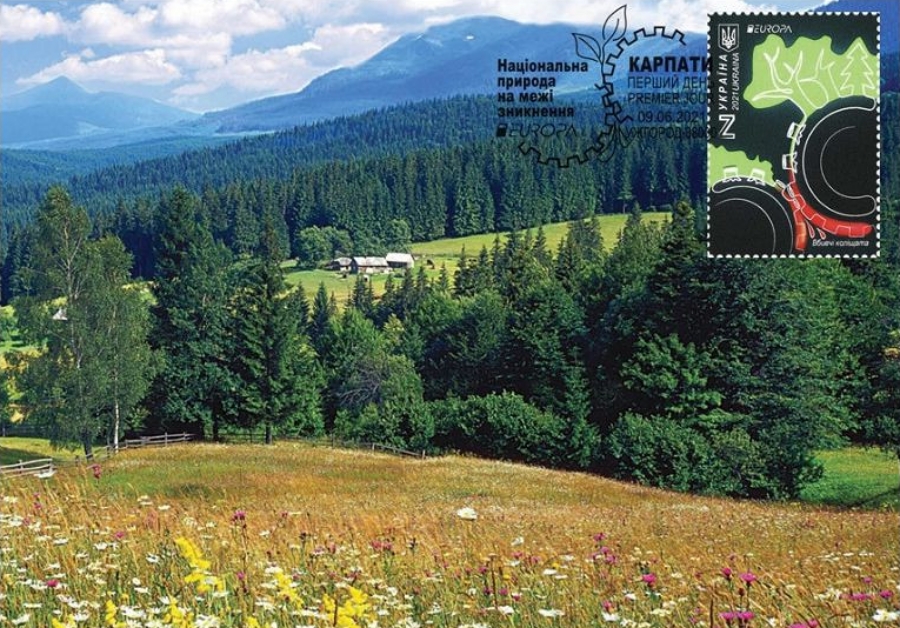 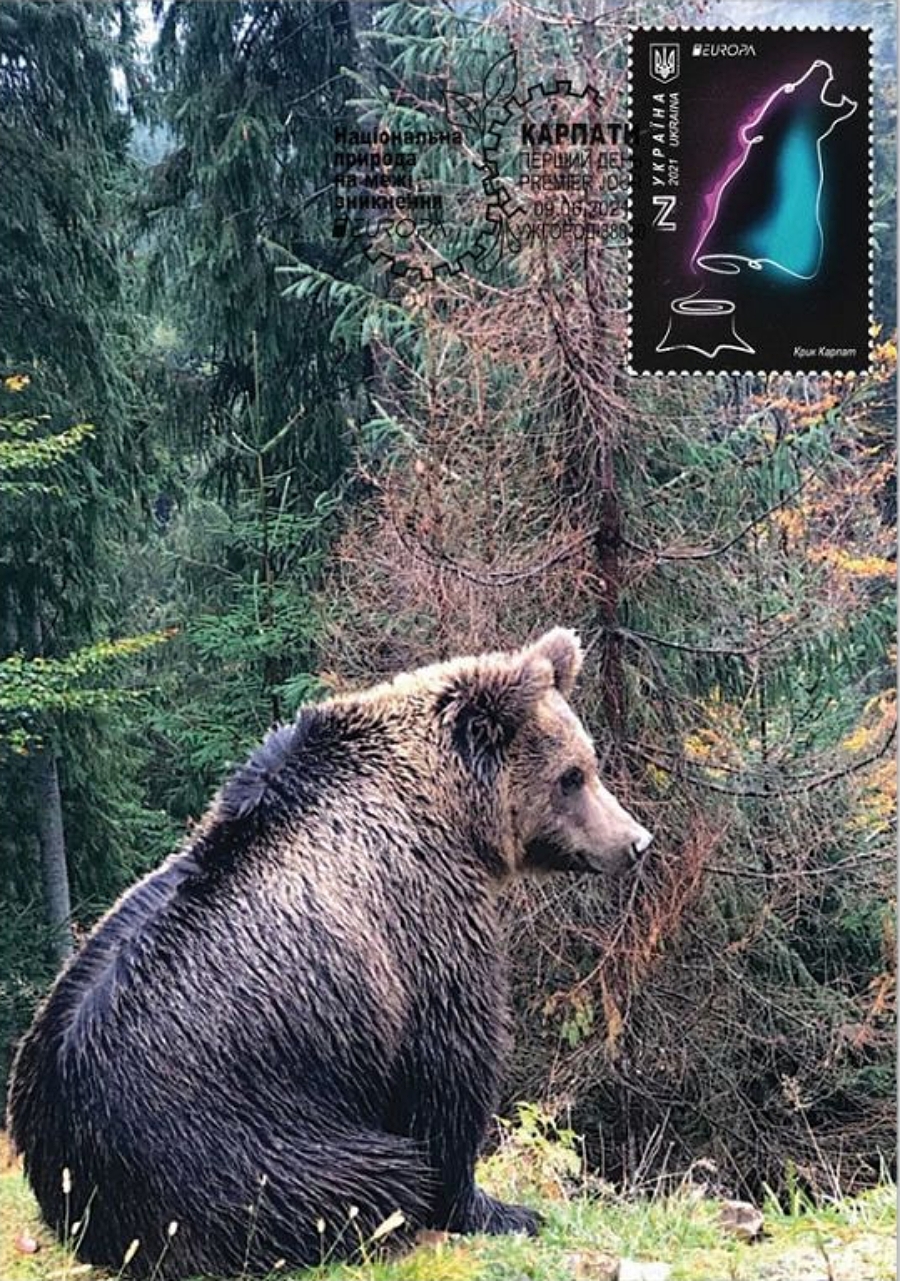 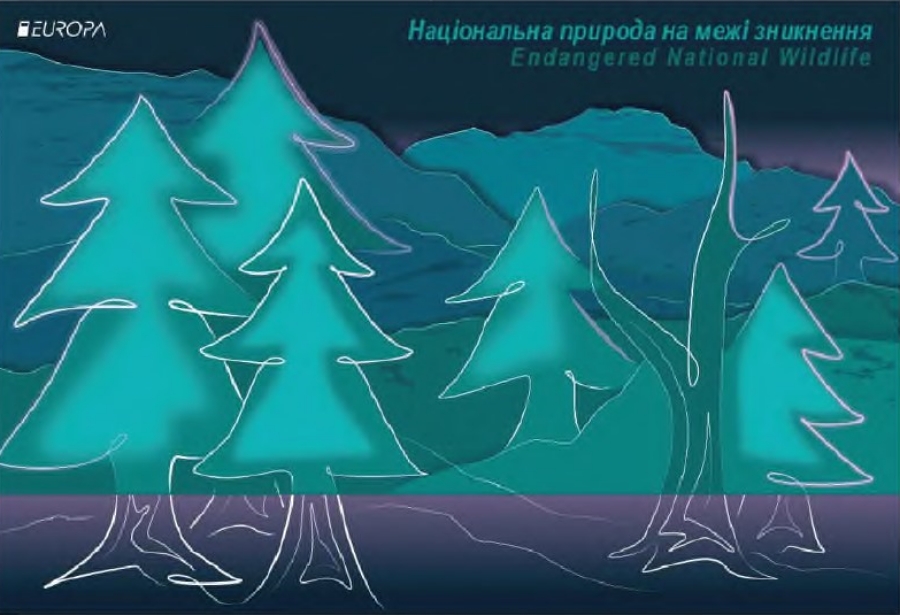 Beech virgin forests and the ancient forests of the Carpathians as well as other regions of Europe are UNESCO World Heritage Site (2017). The Carpathian mountain forests are one of the most significant havens for large predators, in particular the brown bear. According to the UN, the forests of the Ukrainian Carpathians are disappearing at an alarming rate due to illegal logging. This has already led to climate change. And as a result – large-scale floods, flooded villages and roads, the destruction of bridges. The worst being the destruction of a unique ecosystem, because the Carpathians is a climatic factor throughout Ukraine. Depicted in the postage stamps “Killer wheels” is the work of a young artist Olha Simonenk. It demonstrates the main threat, which the Carpathians ancient forest is facing, namely – mass deforestation and the threatening consequences of these illegal actions for all living beings – the inhabitants of the Carpathian forests. 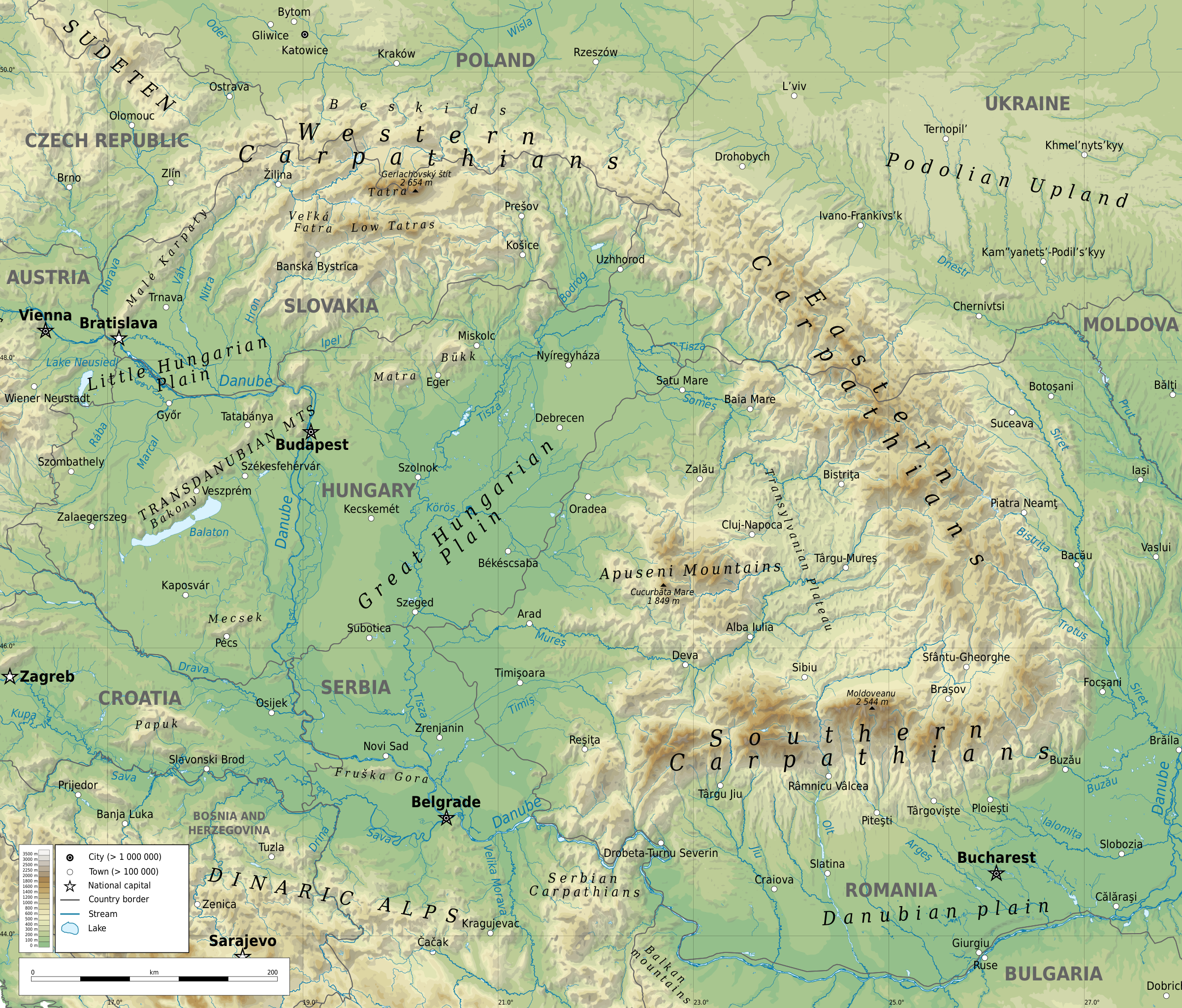 Arching across seven countries, from the Czech Republic, across Poland, Slovakia, Ukraine and Hungary, and down to Romania and the tip of Serbia, the Carpathians are Europe’s last great wilderness area – a bastion for large carnivores, with over half of the continent’s population of bears, wolves and lynx, and home to the greatest remaining reserve of old growth forests outside of Russia.

Covering an area of 209,256km² – five times the size of Switzerland and larger than the Alps – the Carpathian Mountains are home to 18 million people.

For centuries, the Carpathians have provided a home to diverse nationalities and ethnic groups – people separated by different languages, dialects and traditions, but bound together by a highland way of life and a sense of shared hardships. The name for the Carpathians is derived from the ancient Greek ‘Karpat-Heros’ tribes who inhabited the South Carpathians some 2,000 years ago. Since then, waves of people – Romans, Goths, Avars, Slavs, and Magyars, to name a few – have claimed the land as their own.

The area receives twice the rainfall of surrounding regions and it is this freshwater that feeds the major rivers, the Danube and Vistula, through to the Black and Baltic Seas. More than 80% of Romania’s water supply (excluding the Danube), 40% of Ukraine’s supply and one third of the outflow of the Vistula originate directly from the Carpathians.

Kingdom of the Carnivores

The natural diversity supported by the Carpathians is of vital importance for Europe.

The Carpathians are the last region in Europe to support viable populations of Europe’s greatest mammals. Brown bear, wolf and lynx can all be found in the forests of the region. Threatened bird species, including the Imperial eagle, Ural owl and the corncrake, have also found a sanctuary here. On a continent where 40% of mammals are threatened by extinction, the Carpathians offer one of the last opportunities for resettling Europe’s large carnivores.

Europe has also lost 56% of its forest cover and just 2% of the remaining natural forests are protected. Meanwhile the Carpathians contain the continent’s largest remaining natural mountain beech and beech/coniferous forest ecosystems and the largest area of pristine forest, outside of Russia. Together with semi-natural habitats such as mountain pastures and hay meadows, which are the result of centuries of traditional management of the land, the region’s biodiversity is unsurpassed in Europe.

One-third of all European vascular plant species can be found in this region – that means 3,988 plant species, 481 of which are found only in the Carpathians. The mountains form a “bridge” between Europe ‘s northern forests and those in the south and west. As such, they are a vital corridor for the dispersal of plants and animals throughout Europe.

Man’s impact on the landscape through farming can be detected as early as the 4th century, when prehistoric mountain forests were affected by livestock grazing. High in the mountains, pastoral farming has always traditionally dominated and as a result, mountain shepherding has always been one of the most important elements of the Carpathian culture.

This has at times led to a decrease of forest covered areas and also to an increase in soil erosion, a problem that continues today, especially on steep slopes. However, many traditional, sustainable methods for farming and managing the landscape have survived for generations. Furthermore, several thousand years of human habitation settlement have created traditional landscapes of tremendous value for nature, especially through agriculture and shepherding. These managed landscapes often possess a higher level of biodiversity than the purely natural landscapes.

On the foothills, where the agricultural soil was more fertile, severe deforestation has often been experienced. In the 19th century, the forests were opened up to commercial exploitation, especially for construction of the railways. Large areas were clear-cut or replaced with single-species ‘mono-cultures’ with low biodiversity value (e.g. poor habitat, vulnerable to natural hazard).

In the 18th and 19th centuries, the Carpathians were exploited for coal and metal mining and minerals. In the 20th century, industrial expansion caused significant severe air and water pollution, significantly damaging forests due to sulphur emissions and acid rain.

Traces of the Past

In the Carpathians, generally a remote and marginal area, many of the fatal effects of communist planning were avoided. Rather than facing the ‘collectivization’ of lands, private ownership remained the rule, especially in Poland. As a result, this ‘benign neglect’ preserved many marginal rural areas from the agricultural intensification that has devastated many other parts of Europe.

As for forestry, although over-exploitation was the rule at times, techniques which promoted natural regeneration were mostly favored. Also, many of the countries did not have access to modern harvesting technologies and to the funds that opened up even the wildest and most remote valleys in Western Europe. Thus, the damage known in Western Europe, that led to large areas of artificial forests did not affect Central and Eastern European forests to the same extent.

The Carpathians provide habitat for the largest European populations of brown bears, wolves, chamois, and lynxes, with the highest concentration in Romania, as well as over one third of all European plant species. The mountains and their foothills also have many thermal and mineral waters, with Romania having one-third of the European total. Romania is likewise home to the second-largest surface of virgin forests in Europe after Russia, totaling 250,000 hectares (65%), most of them in the Carpathians, with the Southern Carpathians constituting Europe’s largest unfragmented forest area. Deforestation rates due to illegal logging in the Carpathians are high. 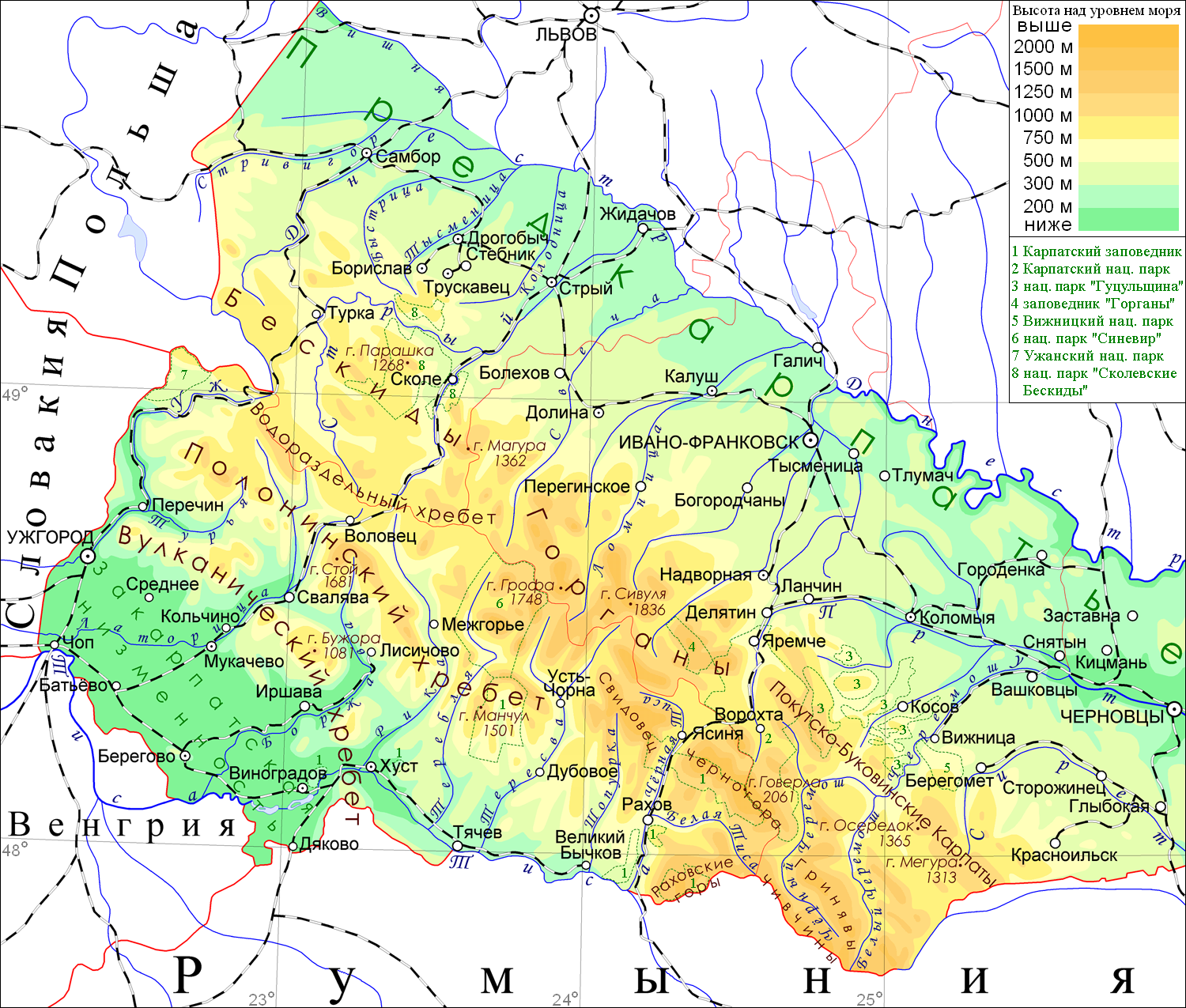 The Ukrainian Carpathians (Ukrainian: Українські Карпати) are a section of the Eastern Carpathians, within the borders of modern Ukraine. They are located in the southwestern corner of Western Ukraine, within administrative territories of four Ukrainian regions (oblasts), covering northeastern part of Zakarpattia Oblast, southwestern part of Lviv Oblast, southern half of Ivano-Frankivsk Oblast and western half of Chernivtsi Oblast.

They are stretching in general northwest-southeast direction, starting at the tripartite border point of Ukraine with Poland and Slovakia, and continuing towards Ukrainian border with Romania. In terms of geological classification, Ukrainian Carpathians belong to two distinctive categories, with major part belonging to the Outer Eastern Carpathians and minor part to the Inner Eastern Carpathians.

Within different regional and national traditions, there are several overlapping variants of divisions and designations for various Eastern Carpathian mountain ranges. Within the wider scope of the Ukrainian Carpathians, a section of the Outer Eastern Carpathians spanning the southeastern corner of Poland, northeastern corner of Slovakia and western part of Ukraine is commonly known as the Eastern Beskids (Ukrainian: Східні Бескиди), while in Slovakia the term Meadowed Mountains (Slovak: Poloniny) is also used for the same mountain range. The scope of those terms varies in accordance to different traditions and classifications.