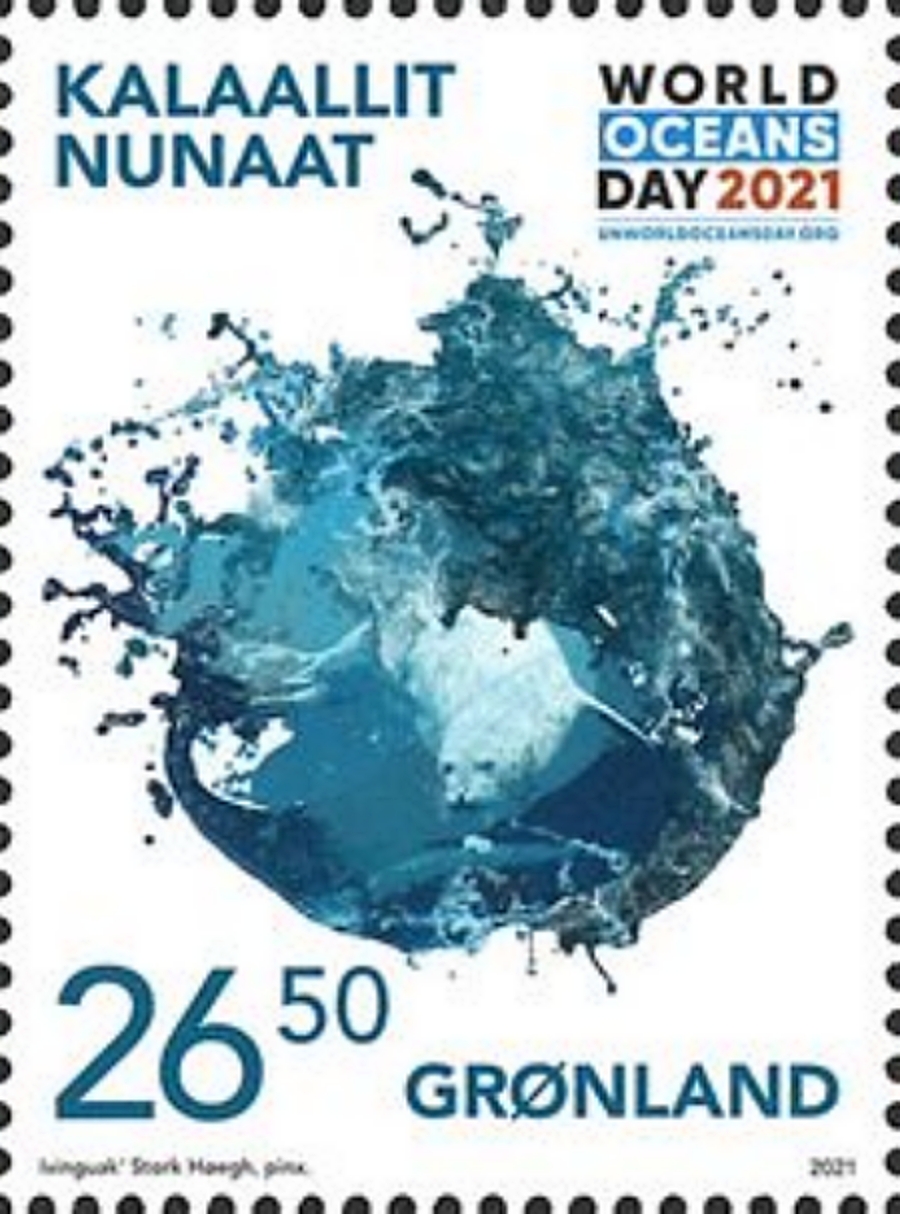 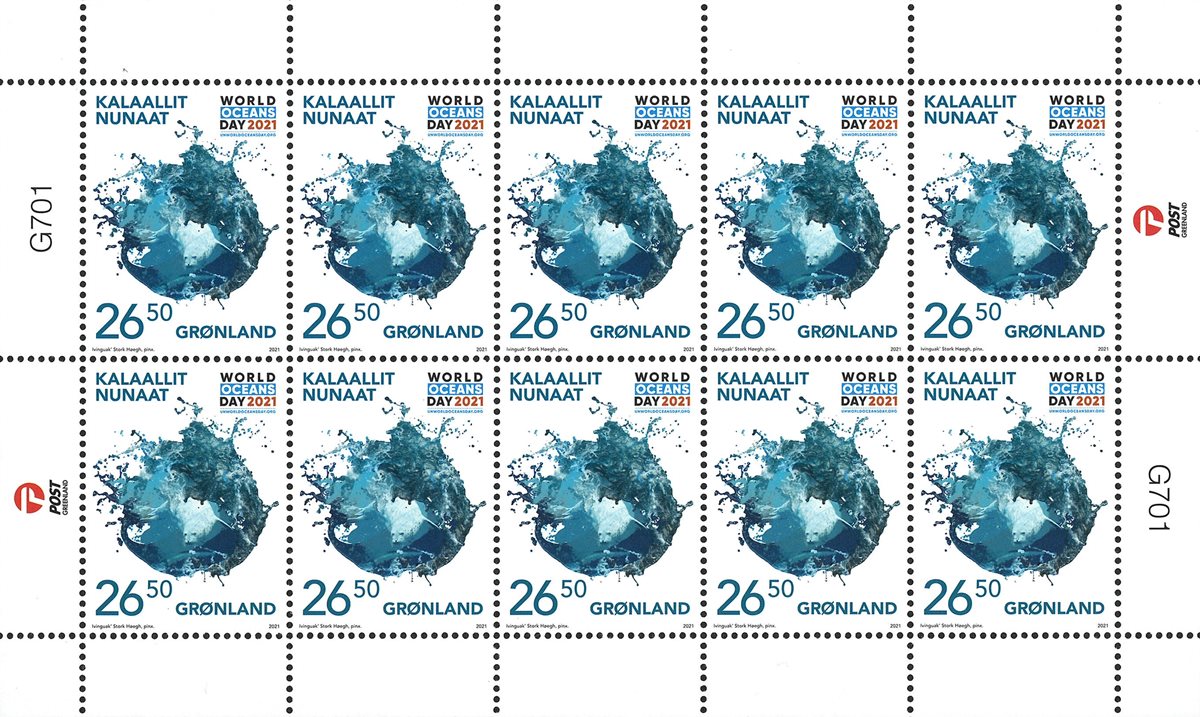 UN World Ocean Day. Mint stamp 1 value. The young artist Ivínguak’ Stork Høegh has created an imaginative stamp that marks the UN World Ocean Day. Every year on 8th June, this UN Day is marked with a focus on the fundamental role of the oceans for life on Earth. The UN’s goal is to make people aware of how important the sea is for our food production, health, survival, as well as our climate and how important it is that we make an effort to conserve the sea’s resources. Greenland participates wholeheartedly in this international effort. The stamp is printed in offset. Face value / post office price: 26,5 DKK.

World Ocean Day has been celebrated every year on June 8 since 1992. On this day, millions of people around the world come together to celebrate our one shared ocean, discuss the most pressing social and environmental issues impacting the ocean, and collaborate on crucial conservation initiatives that will protect and restore it for generations to come.

World Ocean Day has a different theme every year. This year’s theme of “Life and Livelihoods” highlights the ocean’s role in our everyday lives and how it sustains both humanity and all of earth’s living creatures.

The Brundtland Commission (also known as the World Commission on Environment and Development) noted in the 1987 Brundtland Report that the ocean sector lacked a strong voice compared to other sectors.

At the first World Oceans Day in 1992, the objectives were to move the ocean from the sidelines to the center of the intergovernmental and NGO discussions and policy and to strengthen the voice of ocean and coastal constituencies worldwide.

In the early years of coordinated efforts by The Ocean Project with World Ocean Network, events numbered in the dozens. During this time, www.WorldOceanDay.org launched, to help promote the event and generate more global involvement through the dissemination of educational and actionable resources, ideas, and tools free for everyone to use to celebrate World Oceans Day. In 2004, The Ocean Project and World Ocean Network launched the “Help Make a Difference for our Ocean Planet!” with both online and in person opportunities to sign a petition to the United Nations to officially recognize 8 June as World Oceans Day. In December 2008, the UN General Assembly passed a Declaration to officially recognize the Day.

The Ocean Project and World Ocean Network launched an annual theme for first time: “Helping our climate / helping our ocean” with a special focus on coral reefs, to help support International Year of the Reef.

Continued and more heavily emphasize climate with conservation action theme of “one ocean, one climate, one future” because comprehensive polling work showed that the public not making the connections between climate change and ocean health.

The Ocean Project and World Ocean Network recorded over 300 events for WOD 2010, a 26% increase over 2009. Participation in the United States increased by 32% (with participation in 37 states, as compared to 25 states the previous year). Forty-five countries participated in World Oceans Day 2010, including Bangladesh, Belgium, French Polynesia, Nigeria, Ghana, Kenya, Malta, Malaysia, Venezuela, and Portugal.

Based on growing requests from around the world for a two-year focus, The Ocean Project and World Ocean Network launched “Youth: the Next Wave for Change” encouraging all participating organizations to more effectively engage young people in their communities and countries for education and action.

“Make a Promise” global campaign focused again on supporting organizations to use World Oceans Day events as opportunities to ask people in their communities or target audiences to take action for our shared ocean.

Through the global WOD network, stepped up involvement on the major issues facing the ocean, and launched “Together We Have the Power to Protect the Ocean!” with action guides on renewable energy/climate change, sustainable seafood/fisheries, plastics action. The United Nations together with partners launched the annual amateur World Oceans Day Oceanic Photo Competition.

The UN theme for World Oceans Day was ‘Innovation for a sustainable ocean’.[9] Conservation Action Focus on protecting 30% of our lands and ocean by 2030 (“30×30”), joining with the Campaign for Nature and the growing global movement to petition world leaders to commit their countries to 30×30. The Ocean Project and National Geographic coordinate a first-ever 24-hour Youth-a-thon for the ocean, with 24 co-hosts from 24 major time zones discussing and demonstrating ways to learn more about and help protect our shared blue planet.

The theme for World Oceans Day in 2021 is ‘The Ocean: Life & Livelihoods’. The aim of this year’s campaign is to “shed light on the wonder of the ocean and how it is our lifesource, supporting humanity and every other organism on Earth”.

The United Nations selected the following annual themes for the Day: 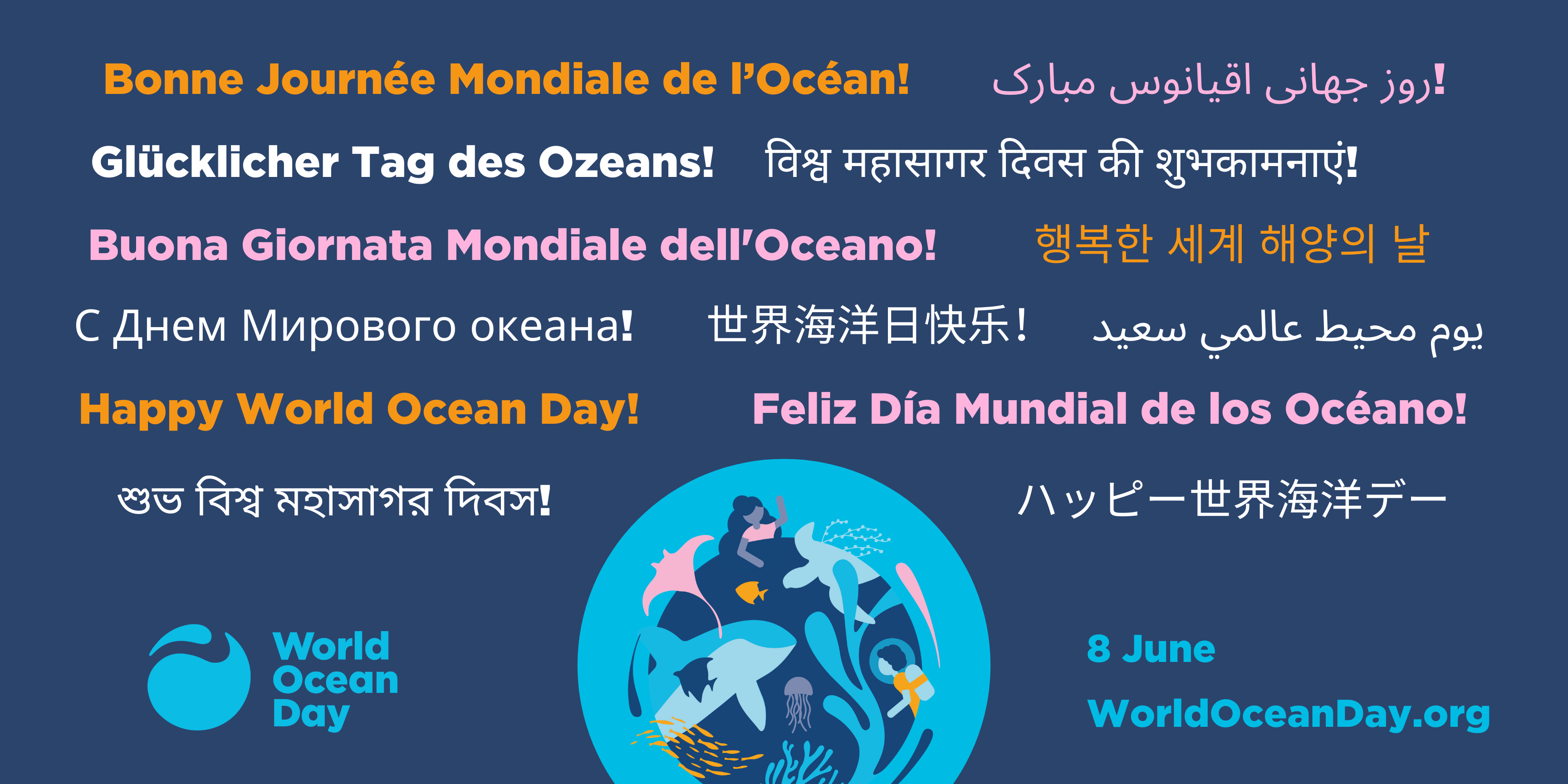