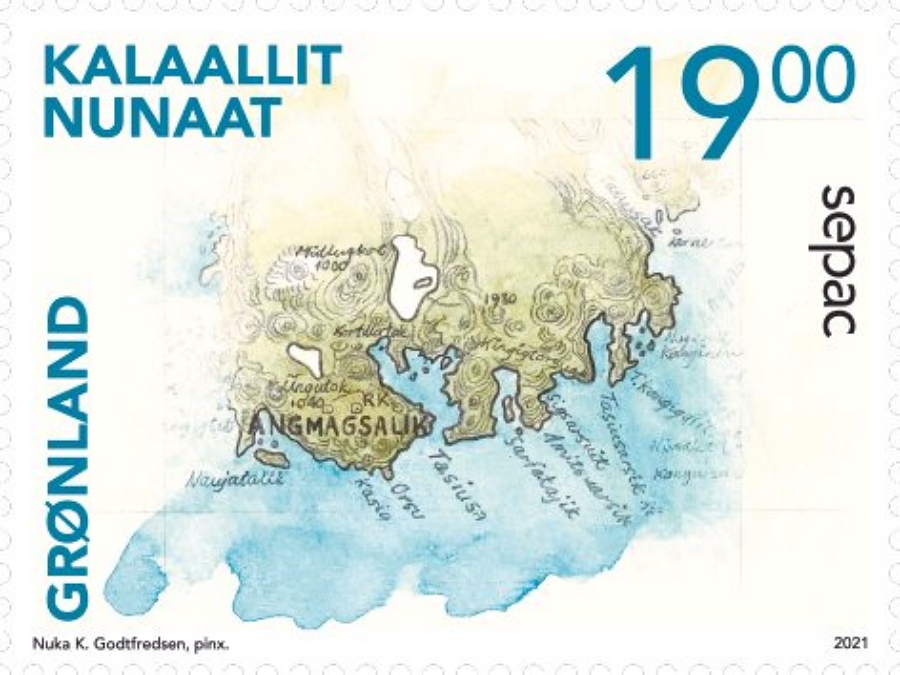 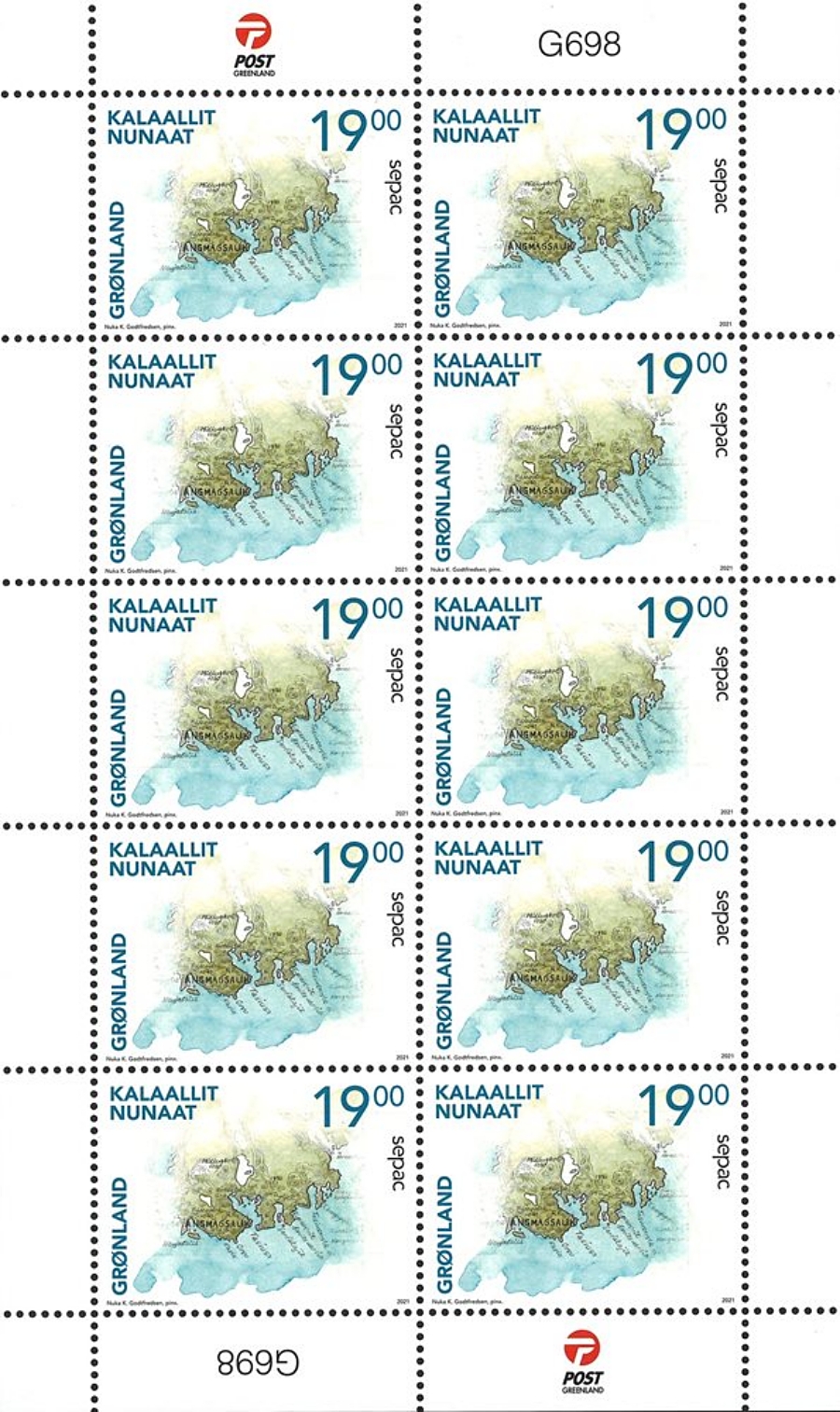 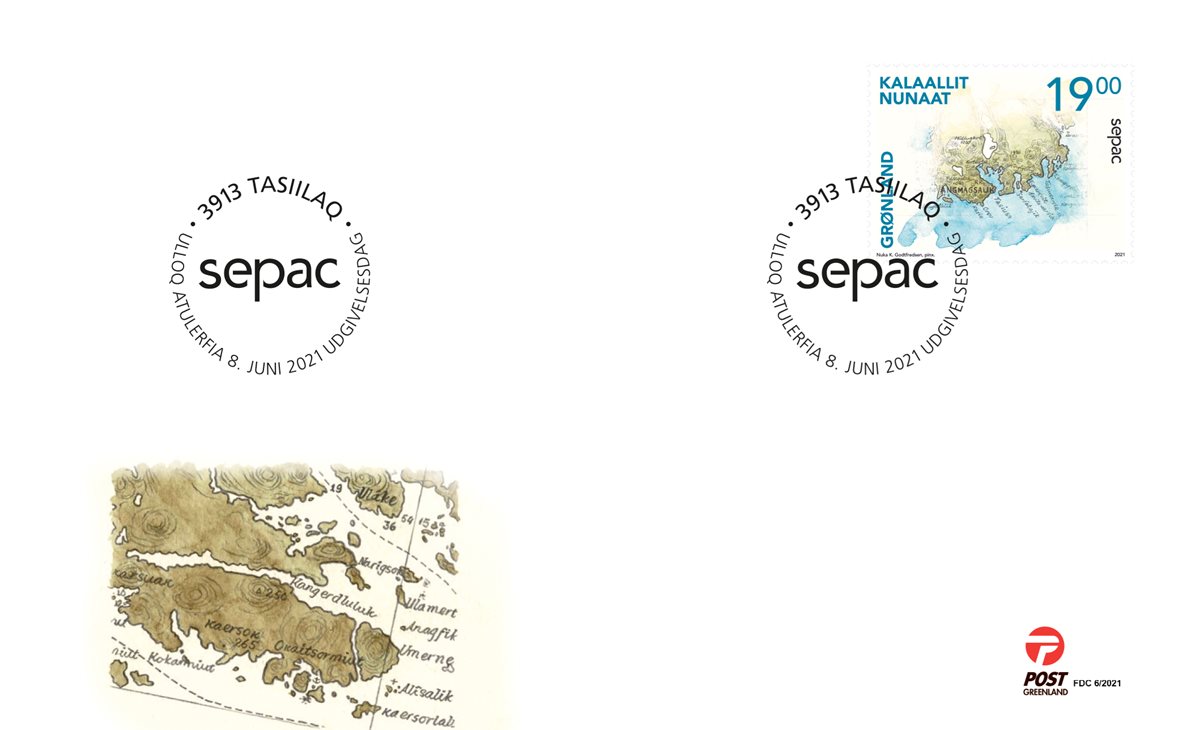 Sepac 2021: Historical Maps. Mint stamp 1 value. POST Greenland s 2021 Sepac stamp was created by illustrator and graphic artist Nuka K. Godtfredsen. In his work designing the stamp, he was inspired by an historical map of Greenland with Gustav Holm s and G. C. Amdrup s shipping routes 1884-85 and 1900, as well as maps of the coast northeast of Tasiilaq according to the diagrams for Holm, Amdrup and Kruuse prepared by W. Thalbitzer. The stamp is printed in offset. Face value / post office price: 19 DKK. Date of issue: 8th June 2021 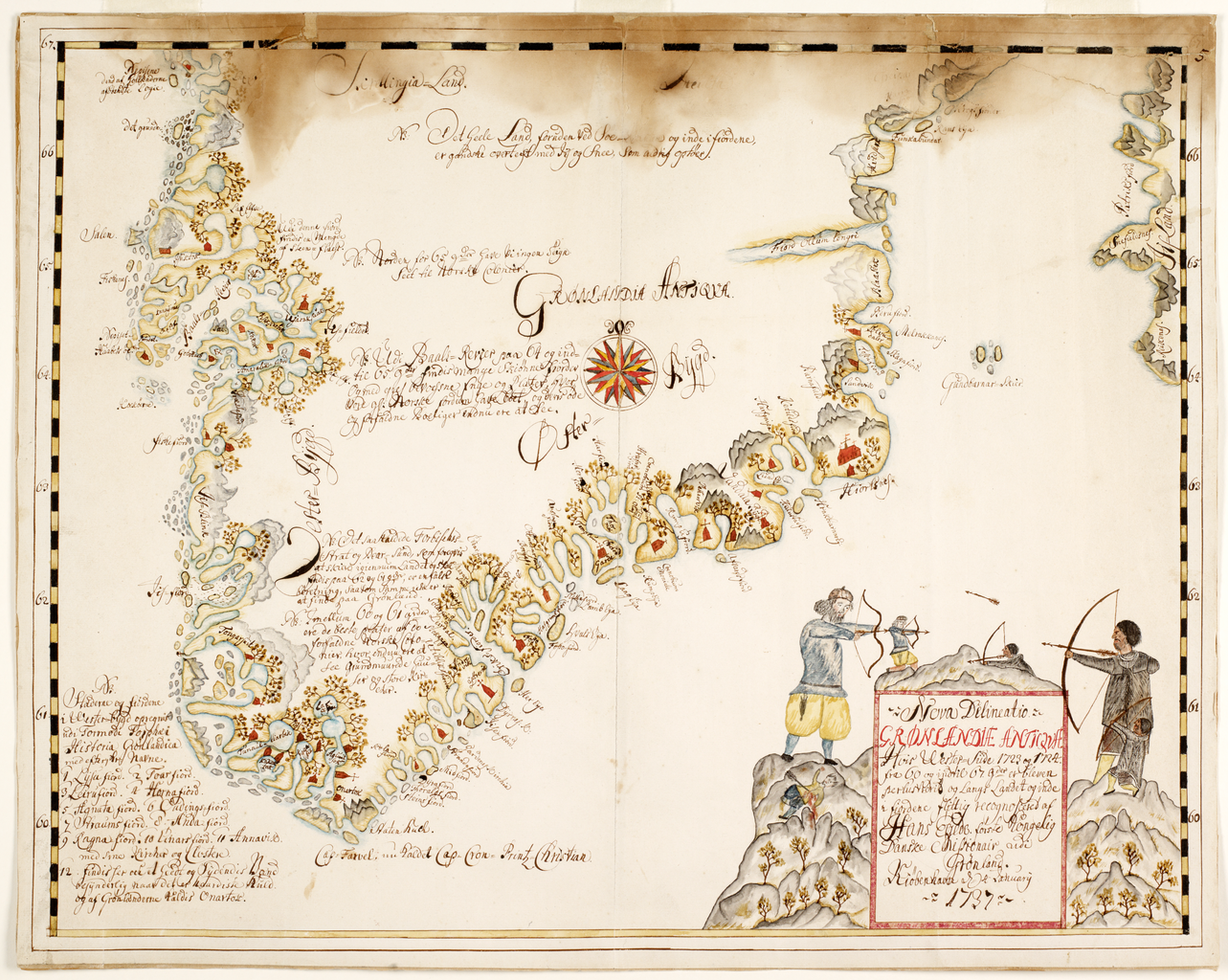 Greenland (Greenlandic: Kalaallit Nunaat, Danish: Grønland) is the world’s largest island, located between the Arctic and Atlantic oceans, east of the Canadian Arctic Archipelago. Greenland is an autonomous territory within the Kingdom of Denmark. Though physiographically a part of the continent of North America, Greenland has been politically and culturally associated with Europe (specifically Norway and Denmark, the colonial powers) for more than a millennium, beginning in 986. The majority of its residents are Inuit, whose ancestors migrated from Alaska through Northern Canada, gradually settling across the island by the 13th century.

Today, the population is concentrated mainly on the southwest coast, while the rest of the island is sparsely populated. Greenland is divided into five municipalities – Sermersooq, Kujalleq, Qeqertalik, Qeqqata, and Avannaata. It has two unincorporated areas – the Northeast Greenland National Park and the Thule Air Base. The latter, while under Danish control, is administered by the United States Air Force. Three-quarters of Greenland is covered by the only permanent ice sheet outside of Antarctica. With a population of 56,081 (2020), it is the least densely populated region in the world. About a third of the population lives in Nuuk, the capital and largest city; the second-largest city in terms of population is Sisimiut, 320 kilometres (200 mi) north of Nuuk. The Arctic Umiaq Line ferry acts as a lifeline for western Greenland, connecting the various cities and settlements.

Greenland has been inhabited at intervals over at least the last 4,500 years by Arctic peoples whose forebears migrated there from what is now Canada. Norsemen settled the uninhabited southern part of Greenland beginning in the 10th century, having previously settled Iceland. In the Icelandic sagas, the Norwegian-born Icelander Erik the Red was said to be exiled from Iceland for manslaughter. Along with his extended family and his thralls (i.e. slaves or serfs), he set out in ships to explore an icy land known to lie to the northwest. After finding a habitable area and settling there, he named it Grœnland (translated as “Greenland”), supposedly in the hope that the pleasant name would attract settlers. The Saga of Erik the Red states: “In the summer, Erik left to settle in the country he had found, which he called Greenland, as he said people would be attracted there if it had a favorable name.” 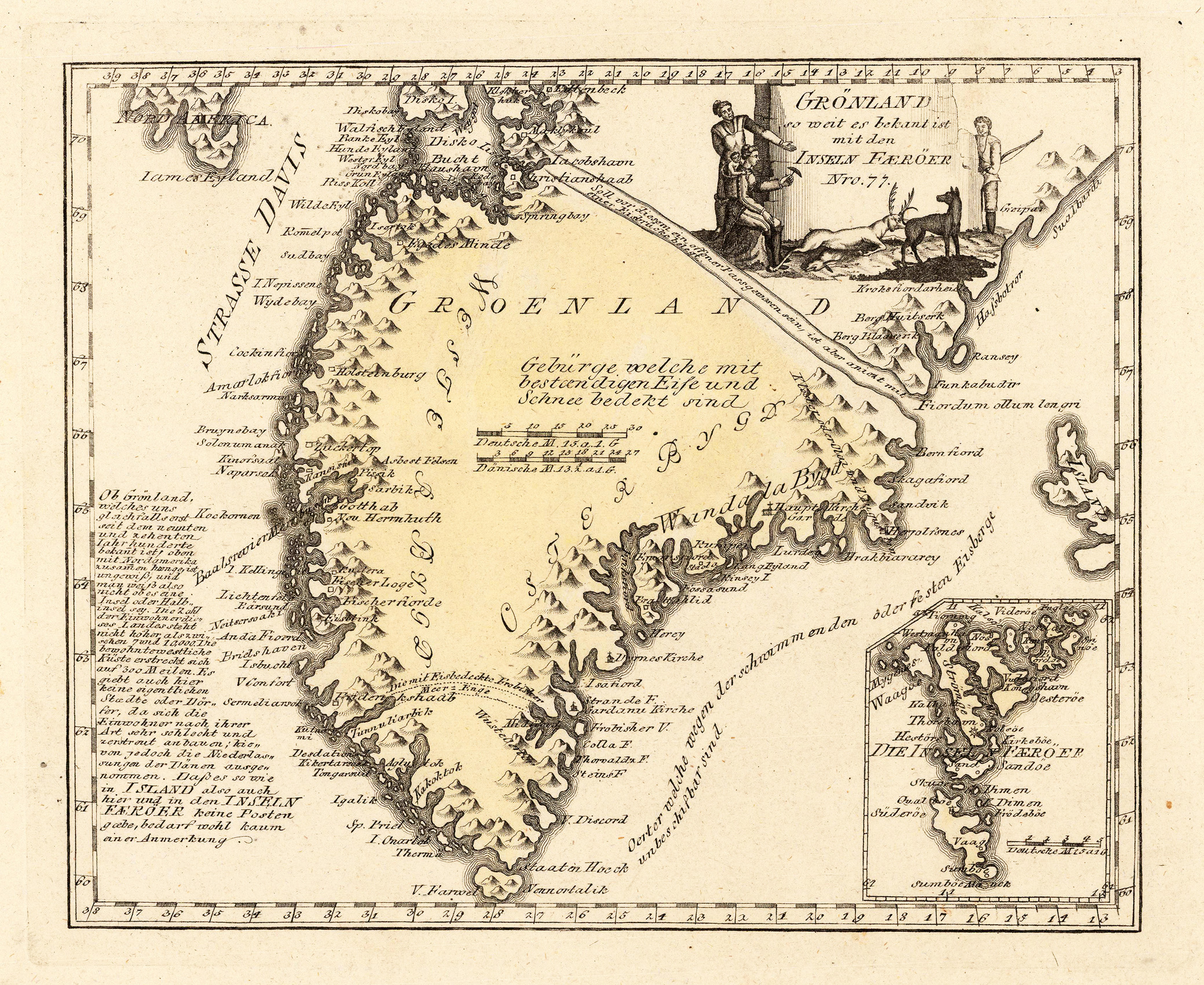 Inuit peoples arrived in the 13th century. Though under continuous influence of Norway and Norwegians, Greenland was not formally under the Norwegian crown until 1261. The Norse colonies disappeared in the late 15th century after Norway was hit by the Black Death and entered a severe decline. Soon after their demise, beginning in 1499, the Portuguese briefly explored and claimed the island, naming it Terra do Lavrador (later applied to Labrador in Canada).

In the early 17th century, Danish explorers reached Greenland again. To strengthen trading and power, Denmark–Norway affirmed sovereignty over the island. Because of Norway’s weak status, it lost sovereignty over Greenland in 1814 when the union was dissolved. Greenland became Danish in 1814 and was fully integrated in Denmark in 1953 organised in the Danish constitution. With the Constitution of 1953, the people in Greenland became citizens of Denmark.

In 1979, Denmark granted home rule to Greenland; in 2008, Greenlanders voted in favor of the Self-Government Act, which transferred more power from the Danish government to the local Greenlandic government. Under the new structure, Greenland has gradually assumed responsibility for policing, the judicial system, company law, accounting, auditing, mineral resource activities, aviation, law of legal capacity, family law and succession law, aliens and border controls, the working environment, and financial regulation and supervision. The Danish government still retains control of monetary policy and foreign affairs including defense. It also provided an initial annual subsidy of DKK 3.4 billion, and to diminish gradually over time. Greenland expects to grow its economy based on increased income from the extraction of natural resources. The capital, Nuuk, held the 2016 Arctic Winter Games. 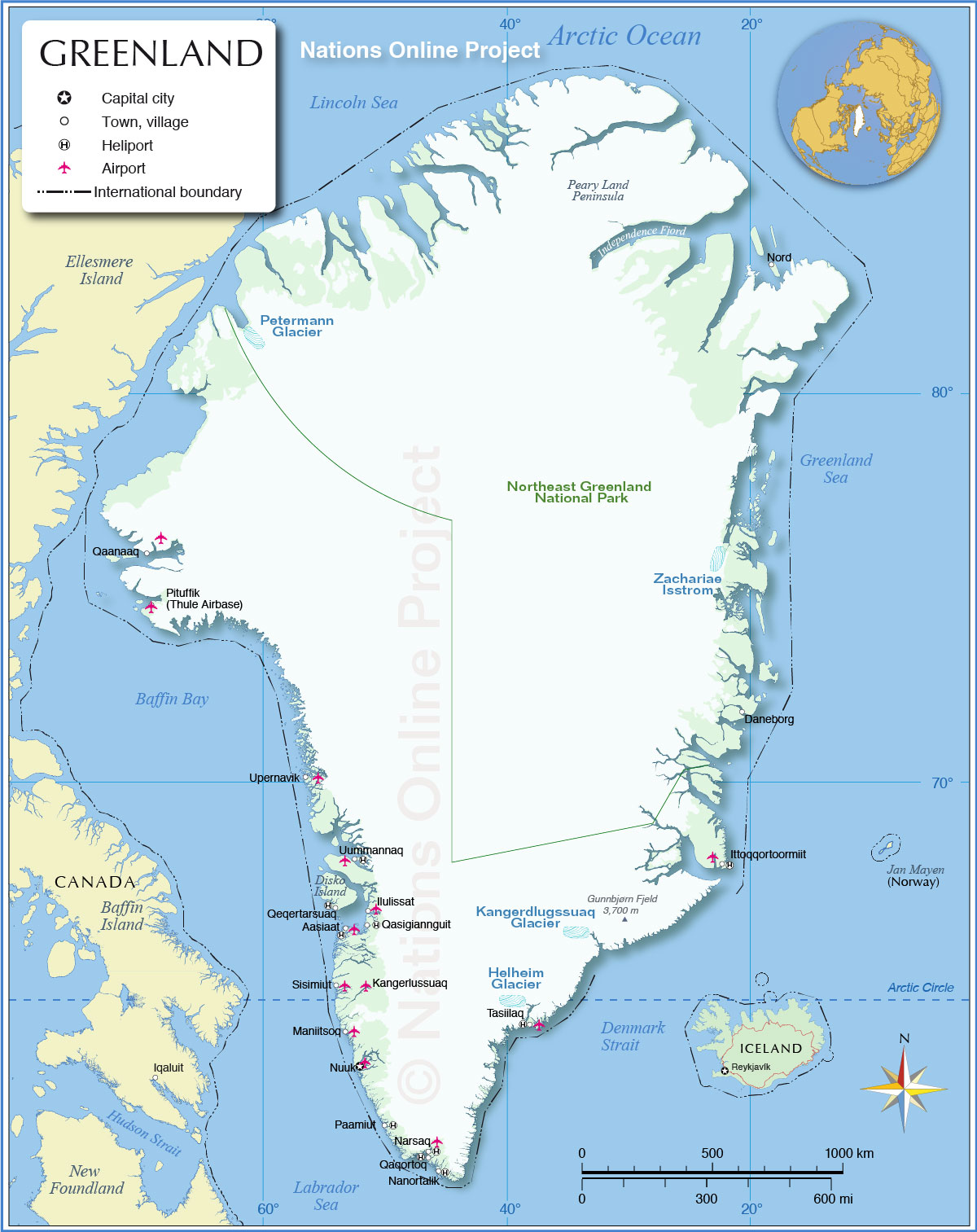 Greenland contains the world’s largest and northernmost national park, Northeast Greenland National Park (Kalaallit Nunaanni nuna eqqissisimatitaq). Established in 1974 and expanded to its present size in 1988, it protects 972,001 square kilometres (375,292 square miles) of the interior and northeastern coast of Greenland and is bigger than all but twenty-nine countries in the world. At 70%, Greenland has one of the highest shares of renewable energy in the world, mostly coming from hydropower.