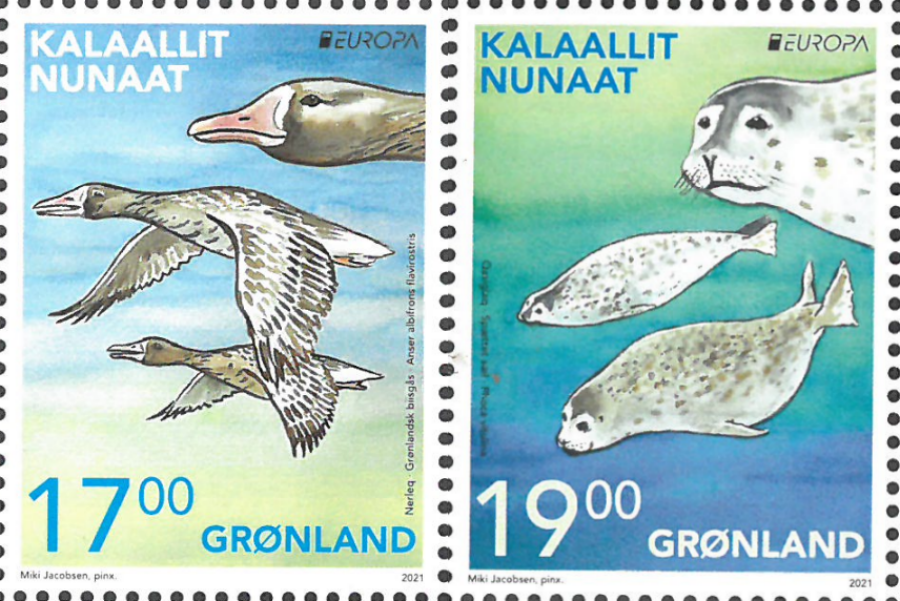 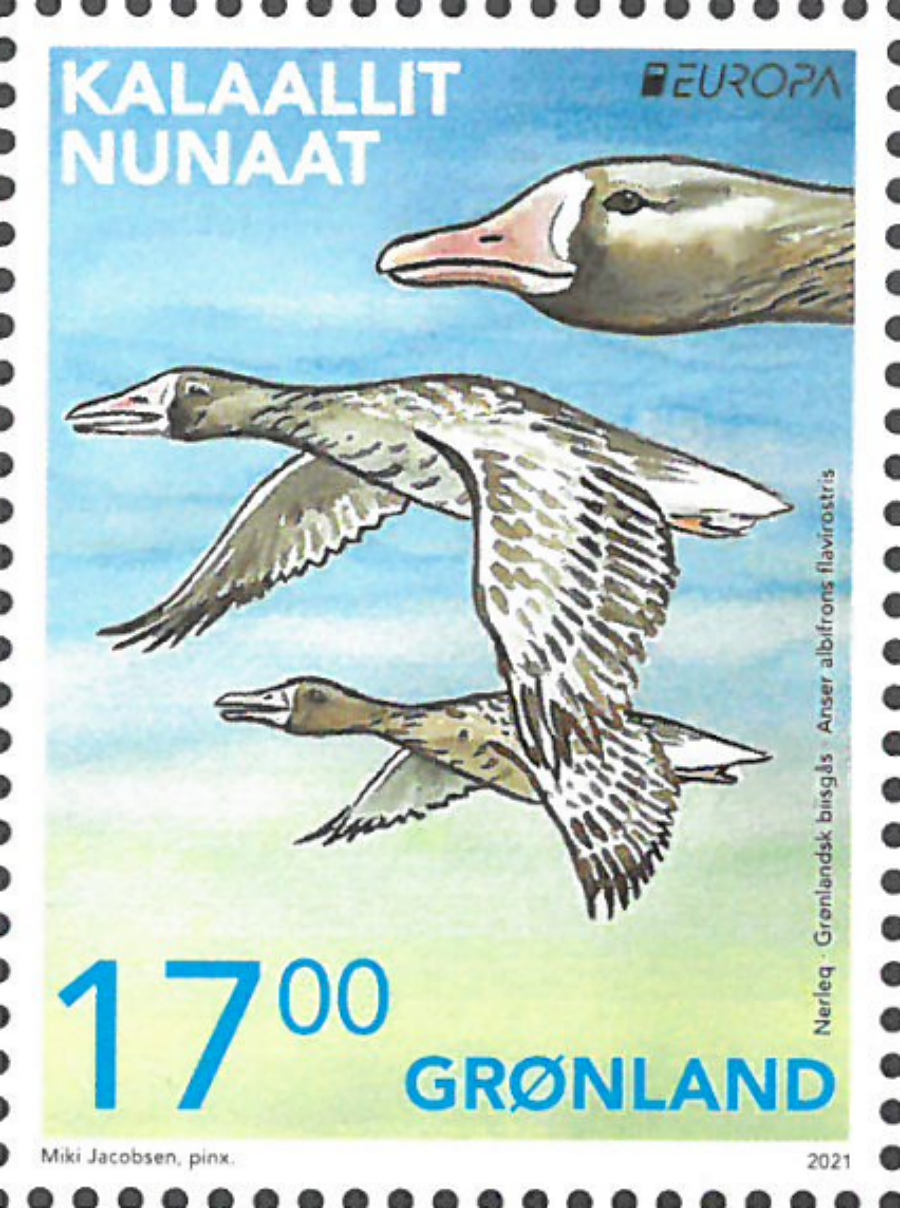 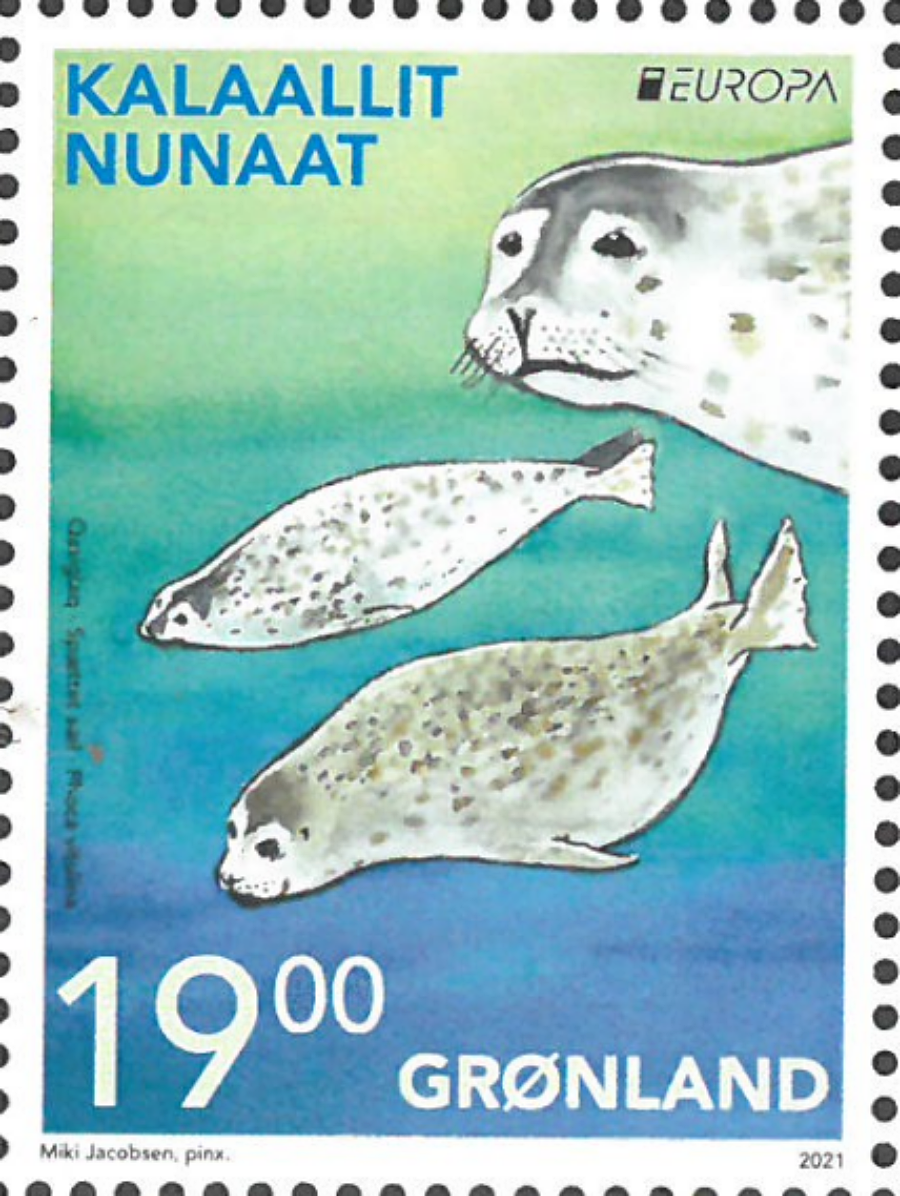 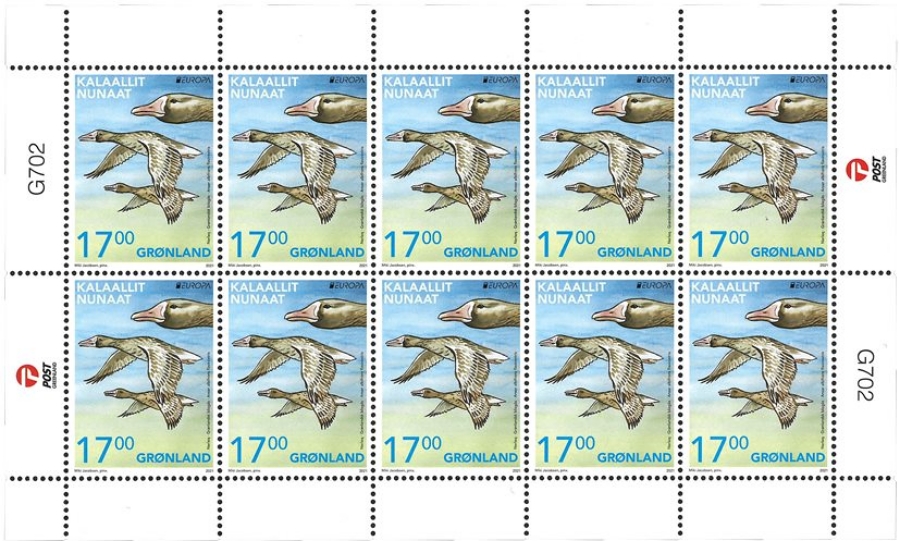 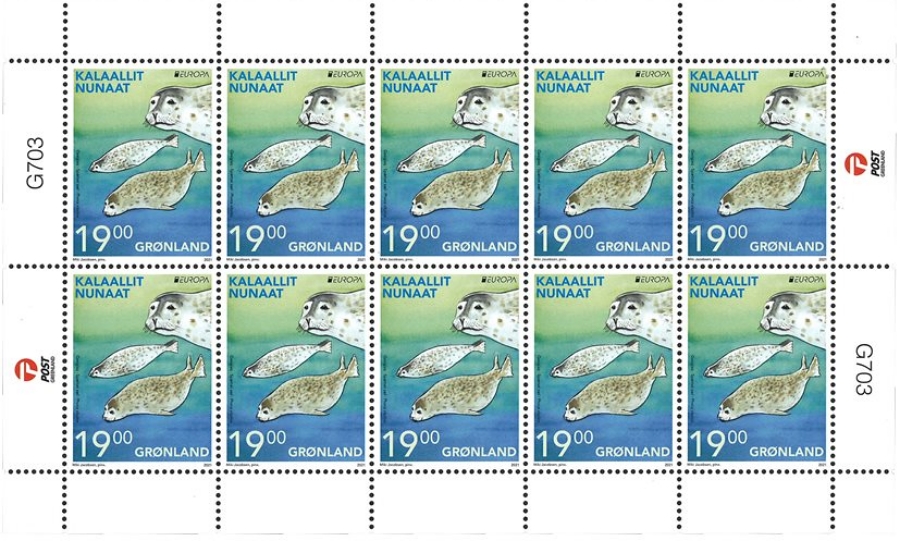 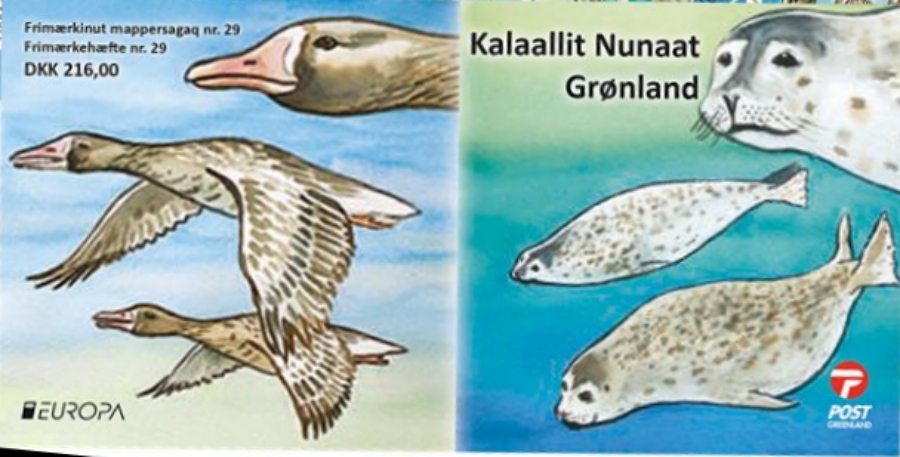 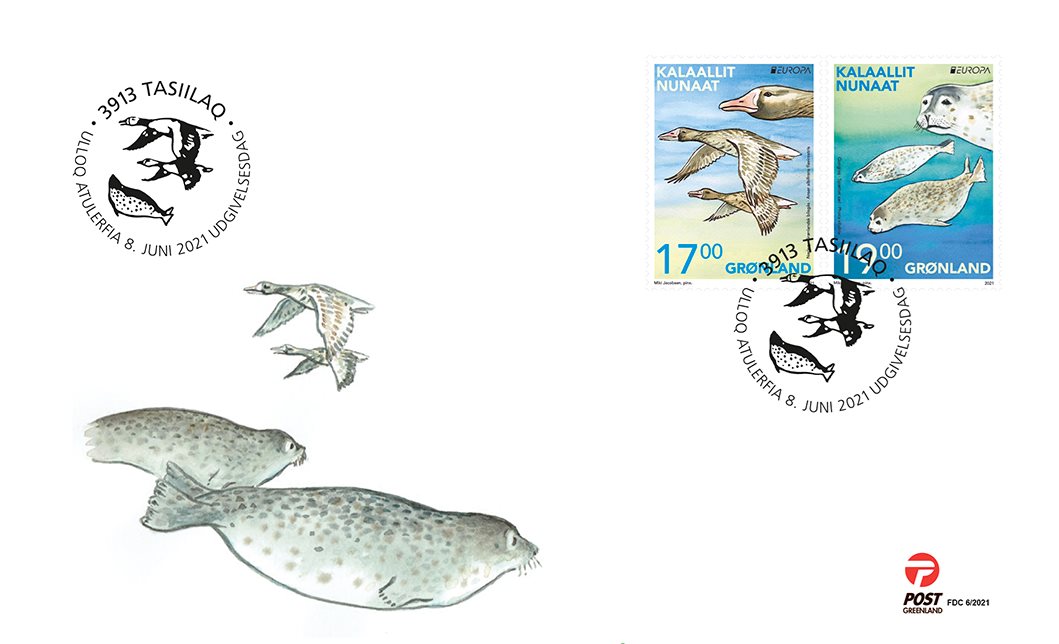 EUROPA – Endangered National Wildlife. Mint set 2 values. This year’s theme for the EUROPA stamps is ‘Endangered National Wildlife’. The Greenland Institute of Nature and Aarhus University, Denmark, have jointly prepared a red list. It is a list of Greenlandic animals and plants’ threatening status and was commissioned by the Government of Greenland at the Department of Fisheries, Hunting and Agriculture. According to the latest red list, which is from 2018, there are few animal species in Greenland that are considered endangered. However, from those that are considered to be endangered, POST Greenland has chosen The Greenland White-fronted Goose, which is assessed as moderately endangered and Harbour Seals, which are assessed as critically endangered. The stamps are designed by the multi-artist Miki Jacobsen and are printed on normal stamp paper. The stamps are also available in a stamp booklet printed on self-adhesive paper. Face value / post office price: 36 DKK. Date of issue: 8th June 2021 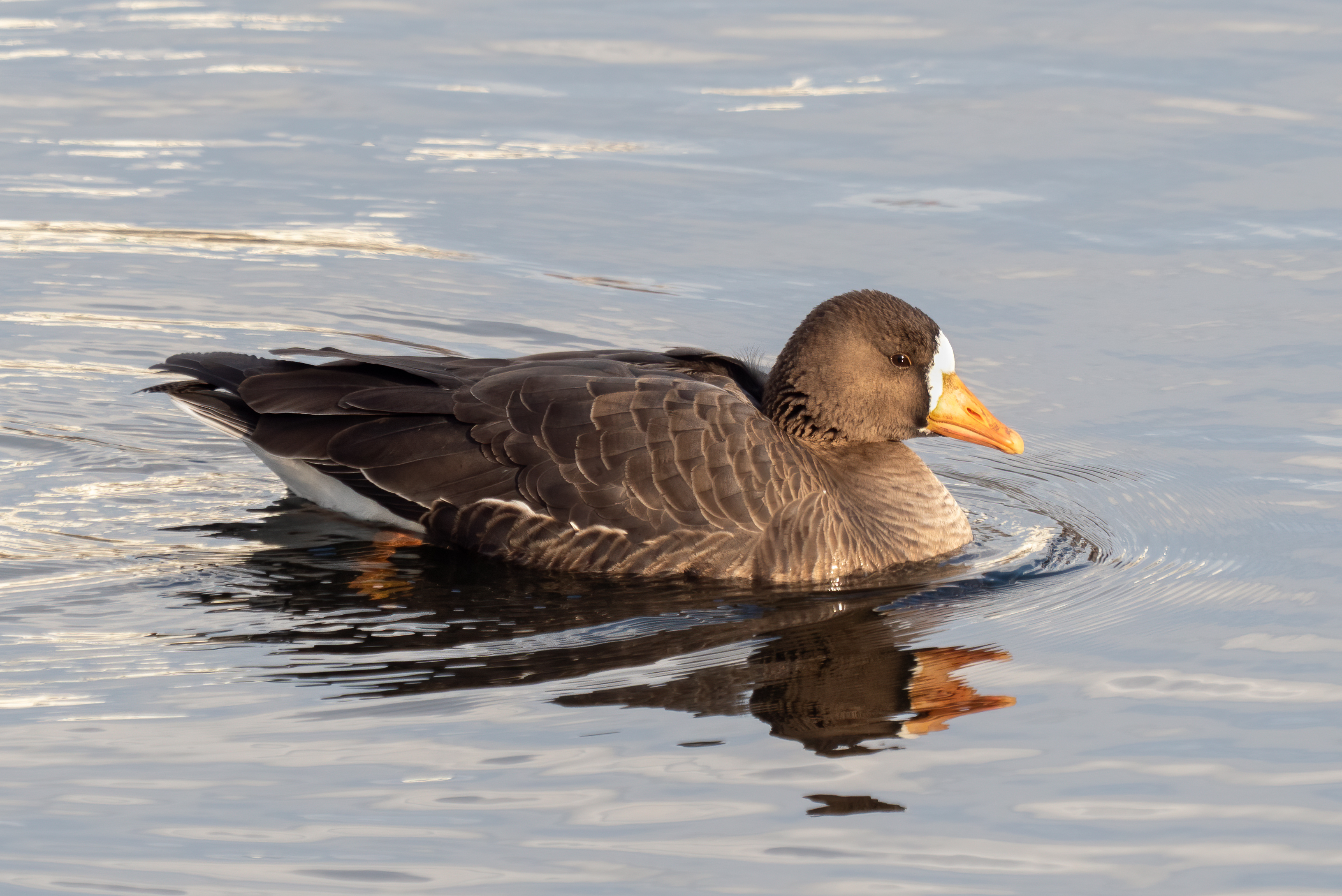 Greater white-fronted geese are 64–81 cm (25–32 in) in length, have a 130–165 cm (51–65 in) wingspan, and weigh 1.93–3.31 kg (4 lb 4 oz–7 lb 5 oz). They have bright orange legs and mouse-coloured upper wing-coverts. They are smaller than greylag geese. As well as being larger than the lesser white-fronted goose, the greater white-fronted goose lacks the yellow eye-ring of that species, and the white facial blaze does not extend upwards so far as in lesser.

The male is typical larger in size, both sexes are similar in appearance—greyish brown birds with light grey breasts dappled with dark brown to black blotches and bars. Both males and females also have a pinkish bill and orange legs and feet.

Greater white-fronted geese make a variation of sounds, but notably the most recognizable is the high pitched cackle that can be imitated by the sounds “he-he.” There is a distinct breaking of the note from the first cackle to the second. 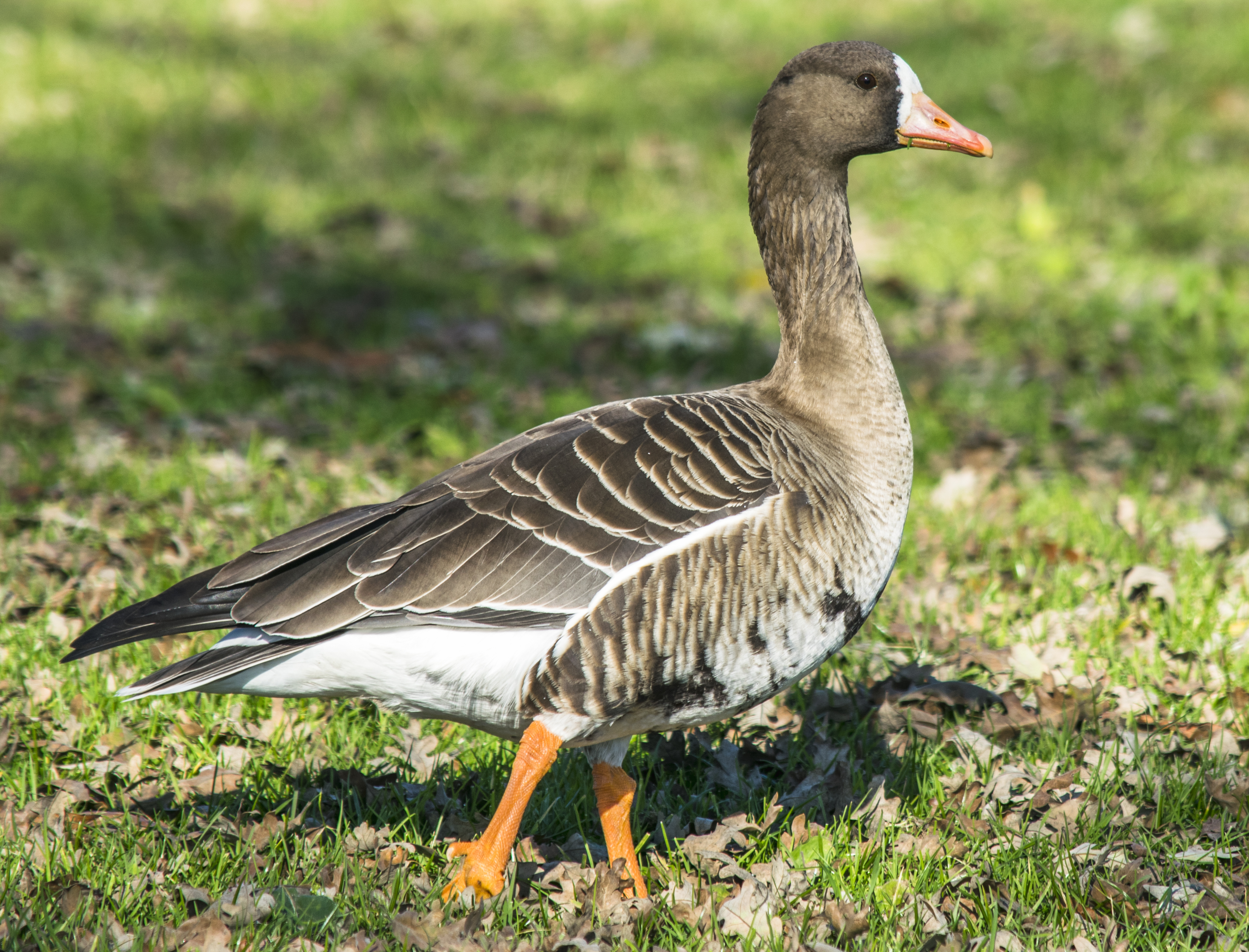 Differences between European and Greenland Birds

The following are the differences which apply to first-winter plumage:[7][8]

The bill of adult Greenland white-fronts are also orange-yellow at the base, but can be more pinkish-yellow on the outer-half, thus close in colour to European white-fronts; the colour difference is more easily determined in dull, flat light rather than bright sunshine. 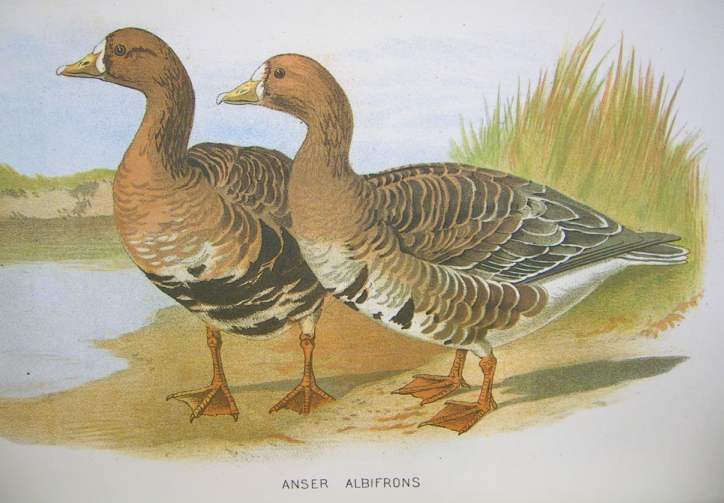 Three other restricted-range races occur in northern North America: Gambel’s white-fronted goose (A. a. gambeli) in interior northwestern Canada and wintering on the coast of the Gulf of Mexico, slightly larger than the nominate form, the Pacific white-fronted goose (A. a. frontalis) and the tule goose (A. a. elgasi) in southwest Alaska, largest and longest-billed of all, both wintering in California. All these races are similar in plumage, differing only in size.

The very distinct Greenland white-fronted goose (A. a. flavirostris) breeding in western Greenland, is much darker overall, with only a very narrow white tip to the tail (broader on the other races), more black barring on its belly and usually has an orange (not pink) bill. It winters in Ireland and western Scotland.

Birds breeding in the far east of Siberia east to Arctic Canada, wintering in the United States and Japan, have been described as A. a. frontalis on the basis of their slightly larger size and a marginally longer bill. Another putative East Asian subspecies (A. a. albicans) has also been described. A 2012 study has found that frontalis and albicans do not merit subspecies status, the former being synonymized with gambeli and the latter with the nominate subspecies; this study found that these forms had been named on the wintering grounds from specimens whose breeding grounds were unknown.

Ecological studies in 2002 suggest the Greenland birds should probably be considered a separate species from A. albifrons. Of particular interest is its unusually long period of parental care and association, which may last several years and can include grandparenting, possibly unique among the Anseriformes. 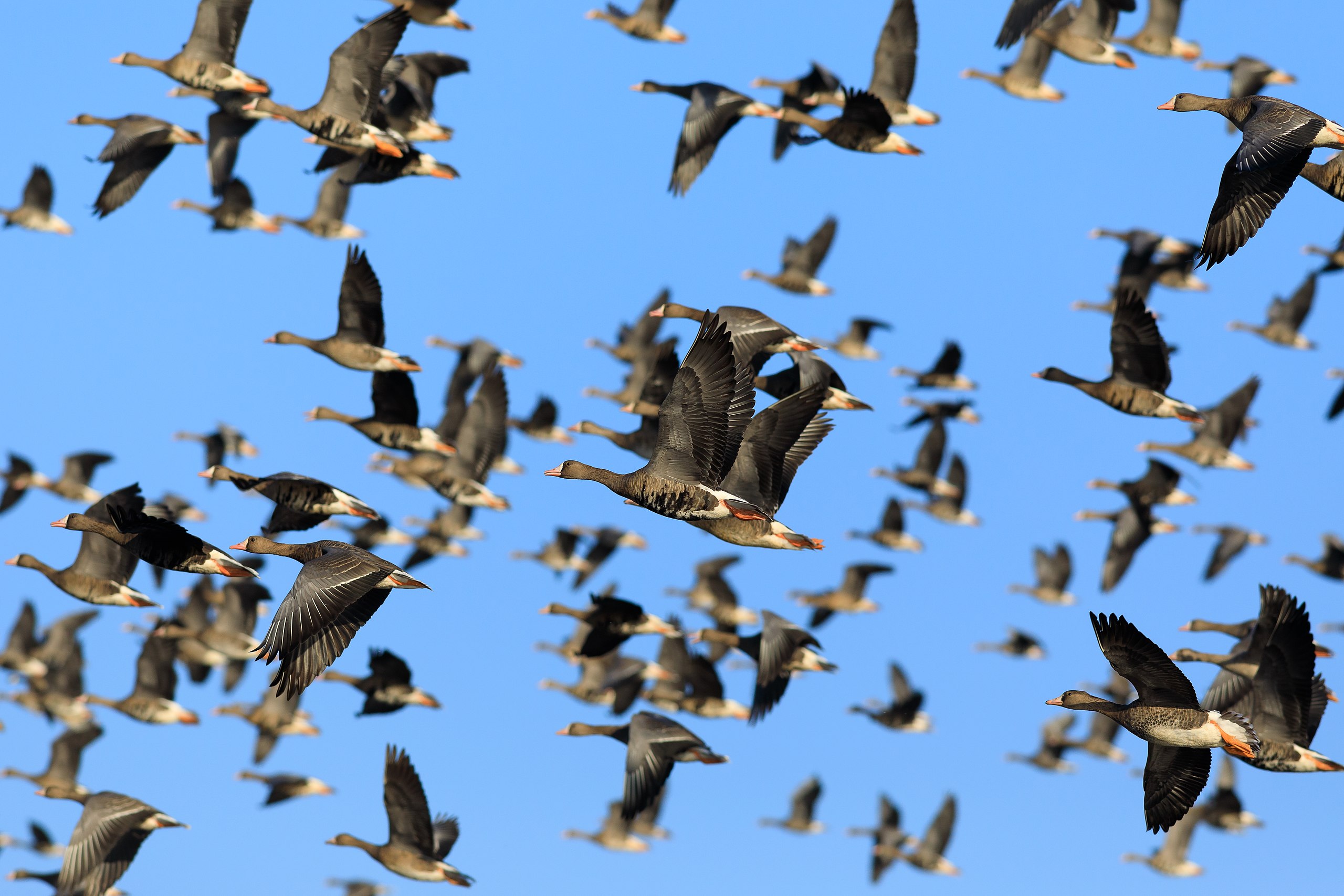 The North American midcontinent birds of the subspecies A. a. gambeli – which in 2010 had a fall population of about 710,000 birds – breeds from the Alaska North Slope across the western and central Canadian Arctic. The Pacific white-fronted goose of the American Pacific coast, which in 2010 numbered approximately 650,000 birds, and the tule geese, which are estimated to number 10,000 birds, nest in western Alaska. The midcontinent geese gather in early fall on the prairies of western Saskatchewan and eastern Alberta, spending several weeks feeding before heading to wintering areas near the Gulf of Mexico, into northern Mexico. The Pacific birds migrate south down the Pacific coast, staging primarily in the Klamath Basin of southern Oregon and northern California and wintering, eventually, in California’s Central Valley. The tule goose is somewhat rare and has been since the latter half of the 19th century, presumably it was affected by destruction of its wintering habitat due to human settlement.

In the British Isles, two races overwinter: Greenland birds in Scotland and Ireland, and Russian birds in England and Wales. They gather on farmland at favored traditional sites, with a famous flock gathering at WWT Slimbridge, Gloucestershire, England. Greenland birds also overwinter in Ireland and from late September and through the winter months, Ireland is home to almost 50% of the Greenland population of white-fronted geese.

A. a. albifrons and A. a. flavirostis are among the taxa to which the Agreement on the Conservation of African-Eurasian Migratory Waterbirds (AEWA) applies. 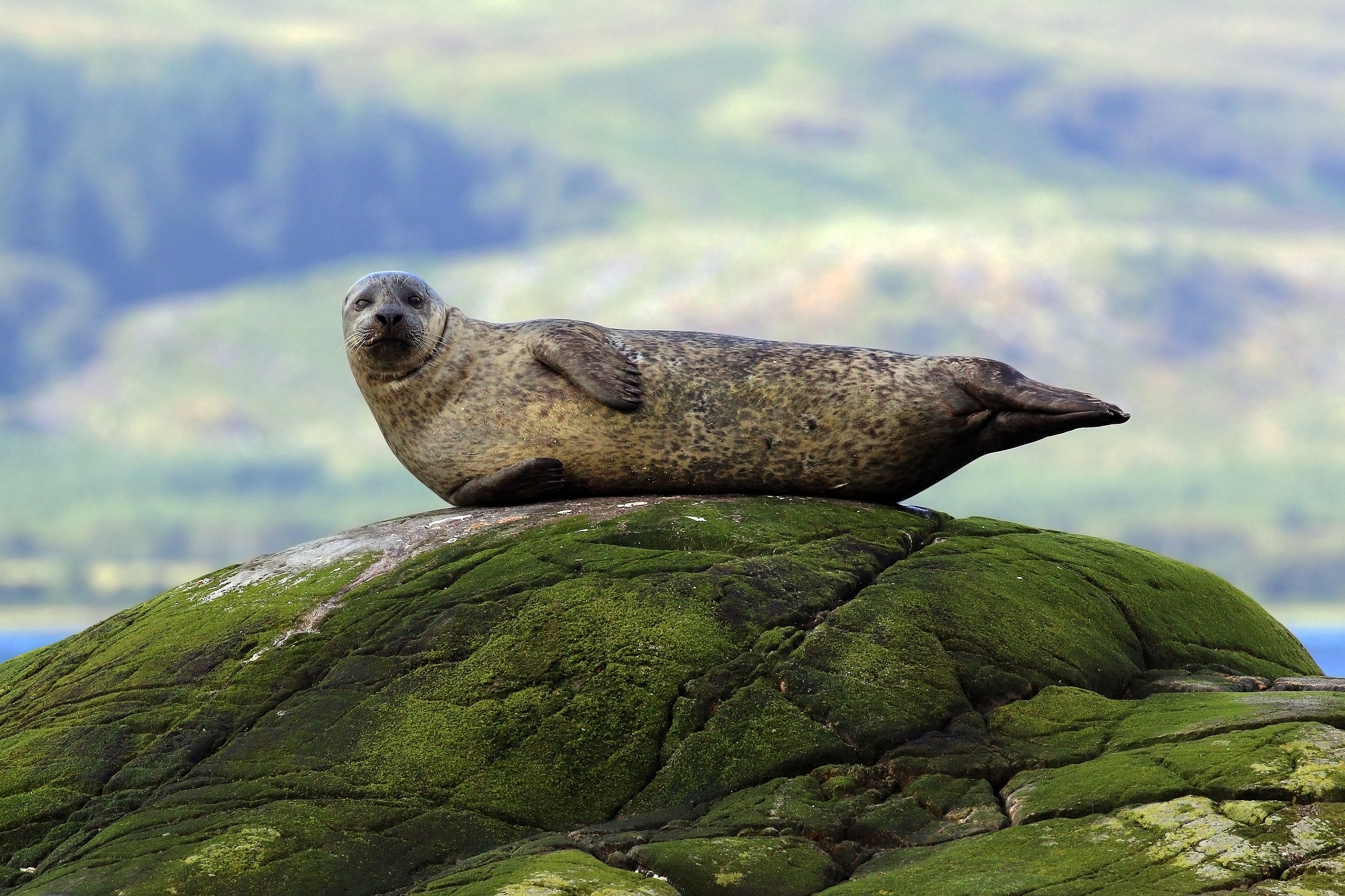 The harbor (or harbour) seal (Phoca vitulina), also known as the common seal, is a true seal found along temperate and Arctic marine coastlines of the Northern Hemisphere. The most widely distributed species of pinniped (walruses, eared seals, and true seals), they are found in coastal waters of the northern Atlantic, Pacific Oceans, Baltic and North Seas.

Harbor seals are brown, silvery white, tan, or gray, with distinctive V-shaped nostrils. An adult can attain a length of 1.85 m (6.1 ft) and a mass of up to 168 kg (370 lb). Blubber under the seal’s skin helps to maintain body temperature. Females outlive males (30–35 years versus 20–25 years). Harbor seals stick to familiar resting spots or haulout sites, generally rocky areas (although ice, sand, and mud may also be used) where they are protected from adverse weather conditions and predation, near a foraging area. Males may fight over mates under water and on land. Females bear a single pup after a nine-month gestation, which they care for alone. Pups can weigh up to 16 kg (35 lb) and are able to swim and dive within hours of birth. They develop quickly on their mothers’ fat-rich milk, and are weaned after four to six weeks.

The global population of harbor seals is 350,000–500,000, but subspecies in certain habitats are threatened. Once a common practice, sealing is now illegal in many nations within the animal’s range. 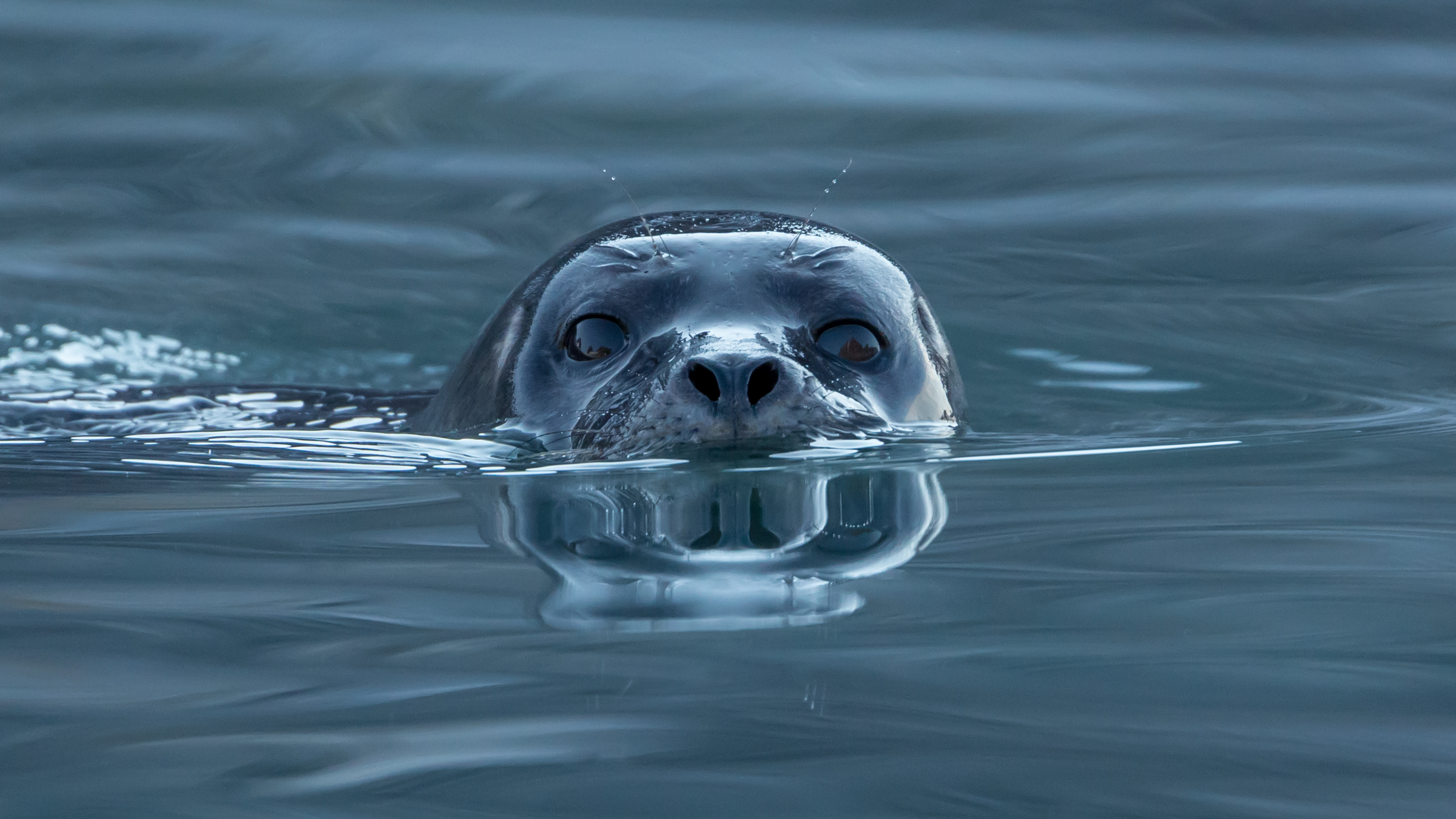 Individual harbor seals possess a unique pattern of spots, either dark on a light background or light on a dark. They vary in colour from brownish black to tan or grey; underparts are generally lighter. The body and flippers are short, heads are rounded. Nostrils appear distinctively V-shaped. As with other true seals, there is no pinna (ear flap). An ear canal may be visible behind the eye. Including the head and flippers, they may reach an adult length of 1.85 m (6.1 ft) and a weight of 55 to 168 kg (120 to 370 lb). Females are generally smaller than males.

There are an estimated 350,000–500,000 harbor seals worldwide. While the population is not threatened as a whole, the Greenland, Hokkaidō and Baltic Sea populations are exceptions. Local populations have been reduced or eliminated through disease (especially the phocine distemper virus) and conflict with humans, both unintentionally and intentionally. Killing seals perceived to threaten fisheries is legal in the United Kingdom, Norway, and Canada, but commercial hunting is illegal. Seals are also taken in subsistence hunting and accidentally as bycatch (mainly in bottomset nets). Along the Norwegian coast, bycatch accounted for 48% of pup mortality. 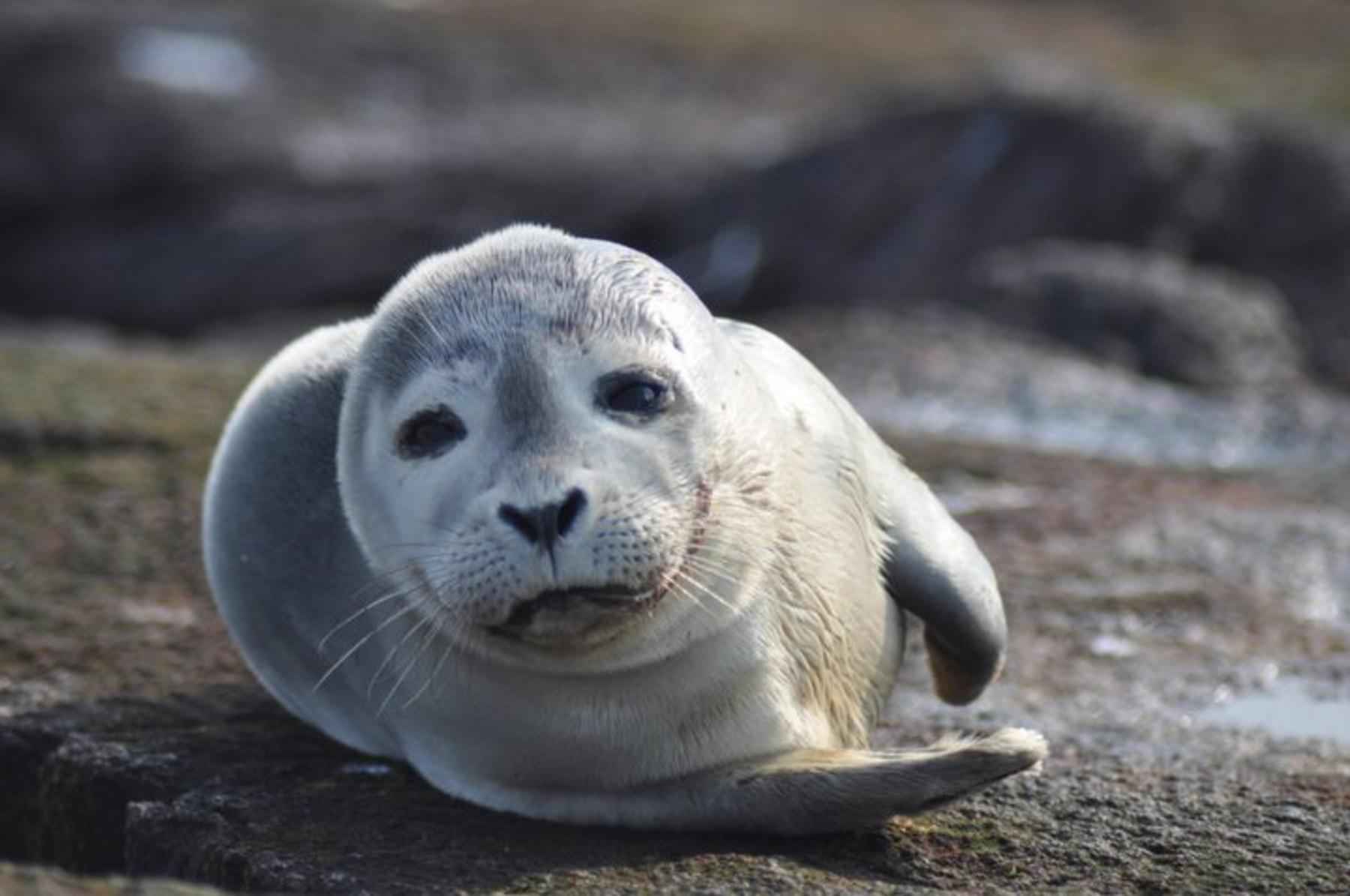 Seals in the United Kingdom are protected by the 1970 Conservation of Seals Act, which prohibits most forms of killing. In the United States, the Marine Mammal Protection Act of 1972 prohibits the killing of any marine mammals and most local ordinances, as well as NOAA, instruct citizens to leave them alone unless serious danger to the seal exists.