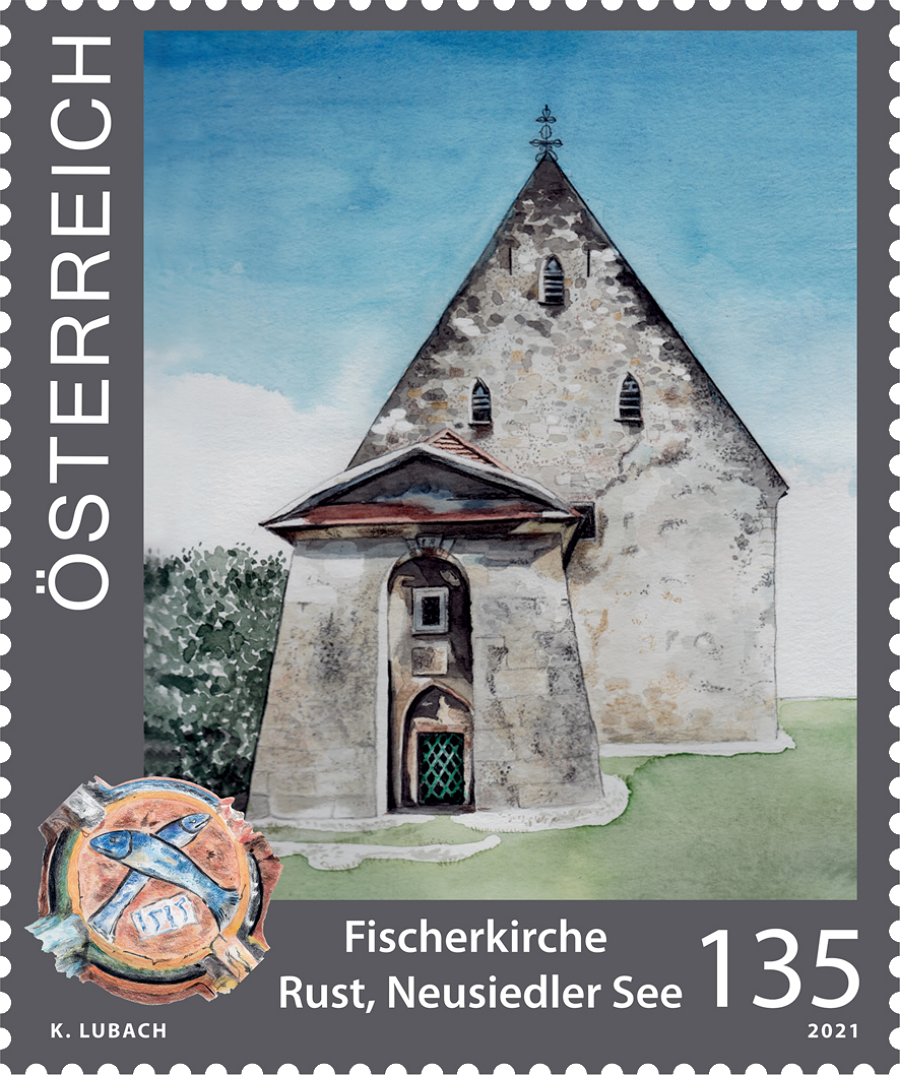 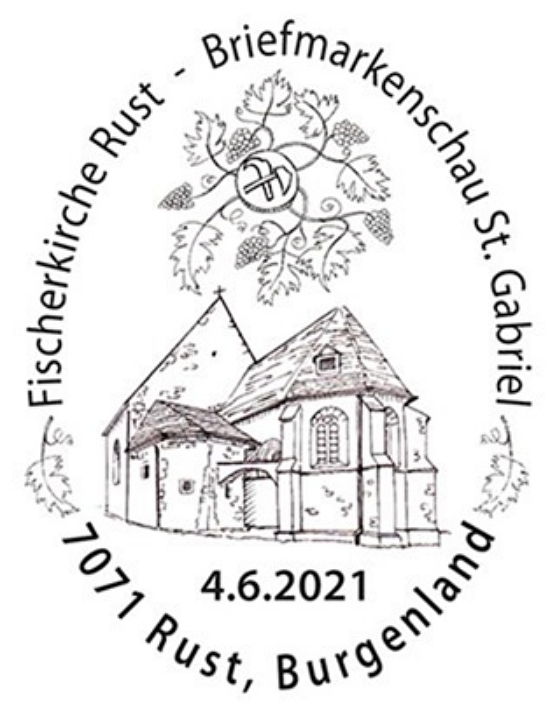 In the series “Churches in Austria”, this time it is the Fischerkirche (Fishermen’s church) in Rust that is being presented, one of the most important monuments to medieval sacred art in Burgenland.

The most impressive building in the protected old town of Rust is the Fischerkirche, a former fortified church surrounded by a defensive wall which, as a parish church, was dedicated to Saints Pancras and Giles and is today mainly used as a museum and as a venue for cultural events. It owes its name to a legend: in the 13th century, while fleeing from the Mongols, Queen Mary of Hungary is supposed to have been rescued from Lake Neusiedl by fishermen, to give thanks for which she founded the Lady Chapel in the church.

The original Romanesque church was built in the 12th century on the remains of a Roman watchtower. Over the course of the centuries the Gothic chancel dedicated to St. Pancras, the Lady Chapel and the Late Gothic transept with its steep gabled roof were added. The tower that once adorned the church collapsed in 1879 and was not rebuilt. Inside the church the frescoes and murals dating from the Romanesque to the Late Gothic period are particularly worth a look; colourful paintings of tendrils and vines date from the period during which the church was used by the Protestants. Of particular art-historical importance are the Late Gothic “Trinity Altar”, the Early Baroque high altar, a stone Pietà from the 15th century and a Late Gothic wooden statue of the Madonna on a Baroque stone pillar. 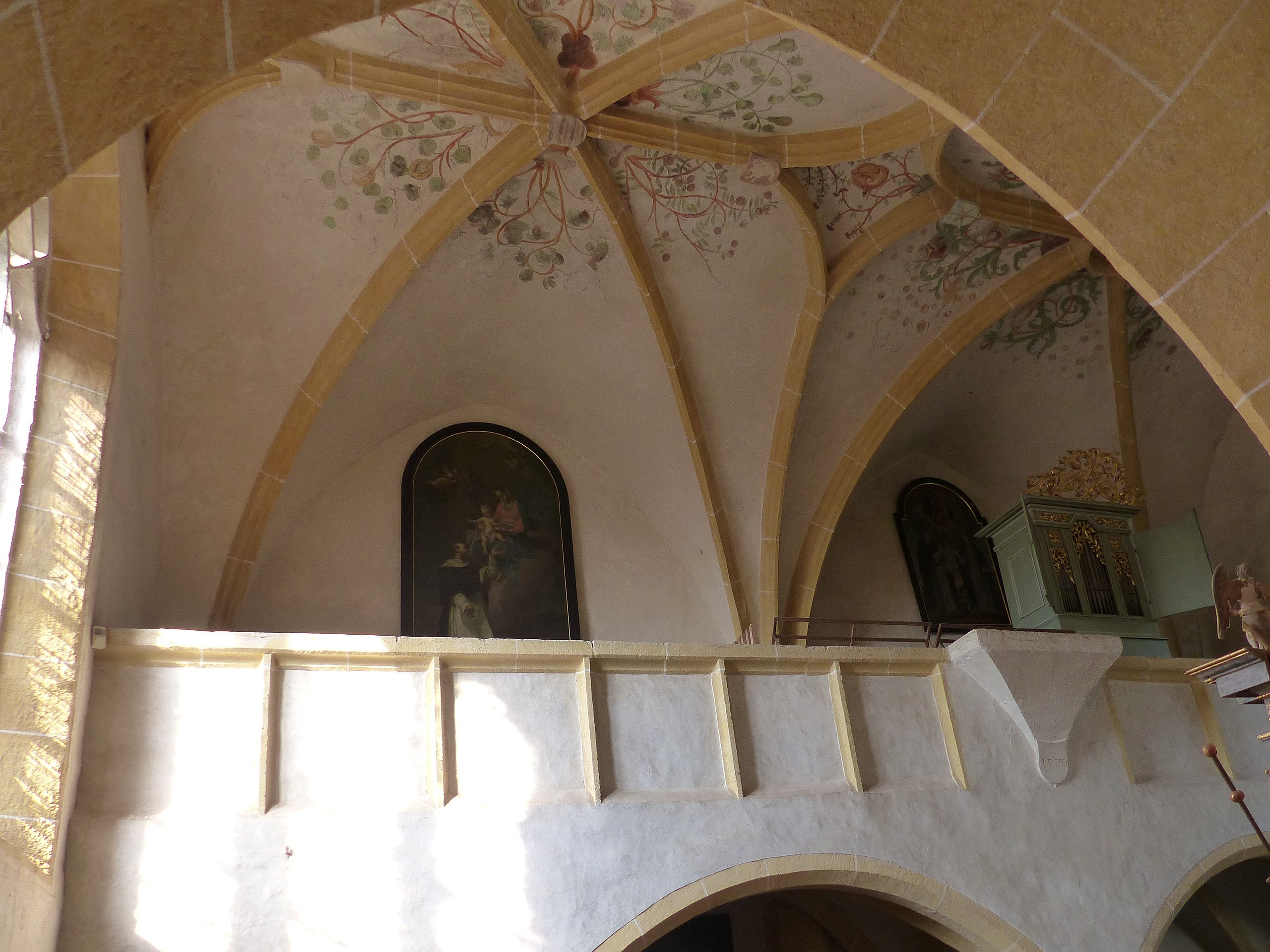 Rust is a city in the Austrian state of Burgenland, located on the western shore of Lake Neusiedl near the border with Hungary. With only about 1,900 inhabitants, it is the country’s smallest statutory city, as it was endowed with the rights of a royal free city by the Hungarian crown in 1681. As a Statutarstadt, it also forms an administrative district (Bezirk) in its own right. The city is famous for its wines, especially for Beerenauslese, ice wine and – especially – Ruster Ausbruch.

The settlement was first mentioned as Ceel in a 1317 deed issued by King Charles I of Hungary, its name derived from Hungarian szil for Elm, later translated into German Rüster or Rusten. The present-day Hungarian name Ruszt is again a translation from the German term. Rust’s citizens received market rights in 1470 and the privilege to mark the corks of their wine barrels with the famous ‘R’ brand in 1524. The affluent town finally gained independence at the 1681 diet at Sopron by the order of Emperor Leopold I, King of Hungary.

With the Burgenland region, Rust passed from Hungary to the Republic of Austria in 1921. 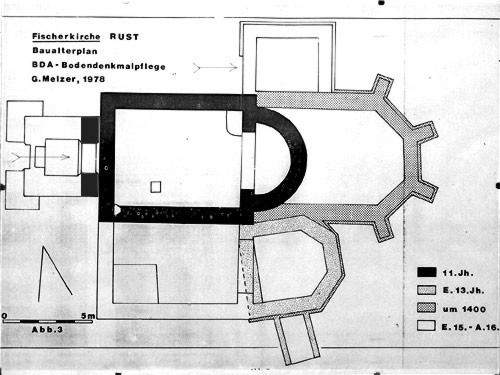 The Fischerkirche in Rust is a former Roman Catholic fortified church and was dedicated to St. Pancras and consecrated to St. Aegidius. The former church is now almost exclusively used for museum and cultural purposes. It is located on a slight hill in the southwest part of Old Town. The building is surrounded by a church yard, which used to be a cemetery, and a defensive wall.

The name “Fischerkirche” came up only in the middle of the 20th century and can be traced back to a legend. In the 1950s, frescoes from the end of the 13th and beginning of the 16th centuries were uncovered during restoration work in the Pankratius Choir and in the Marienkapelle. 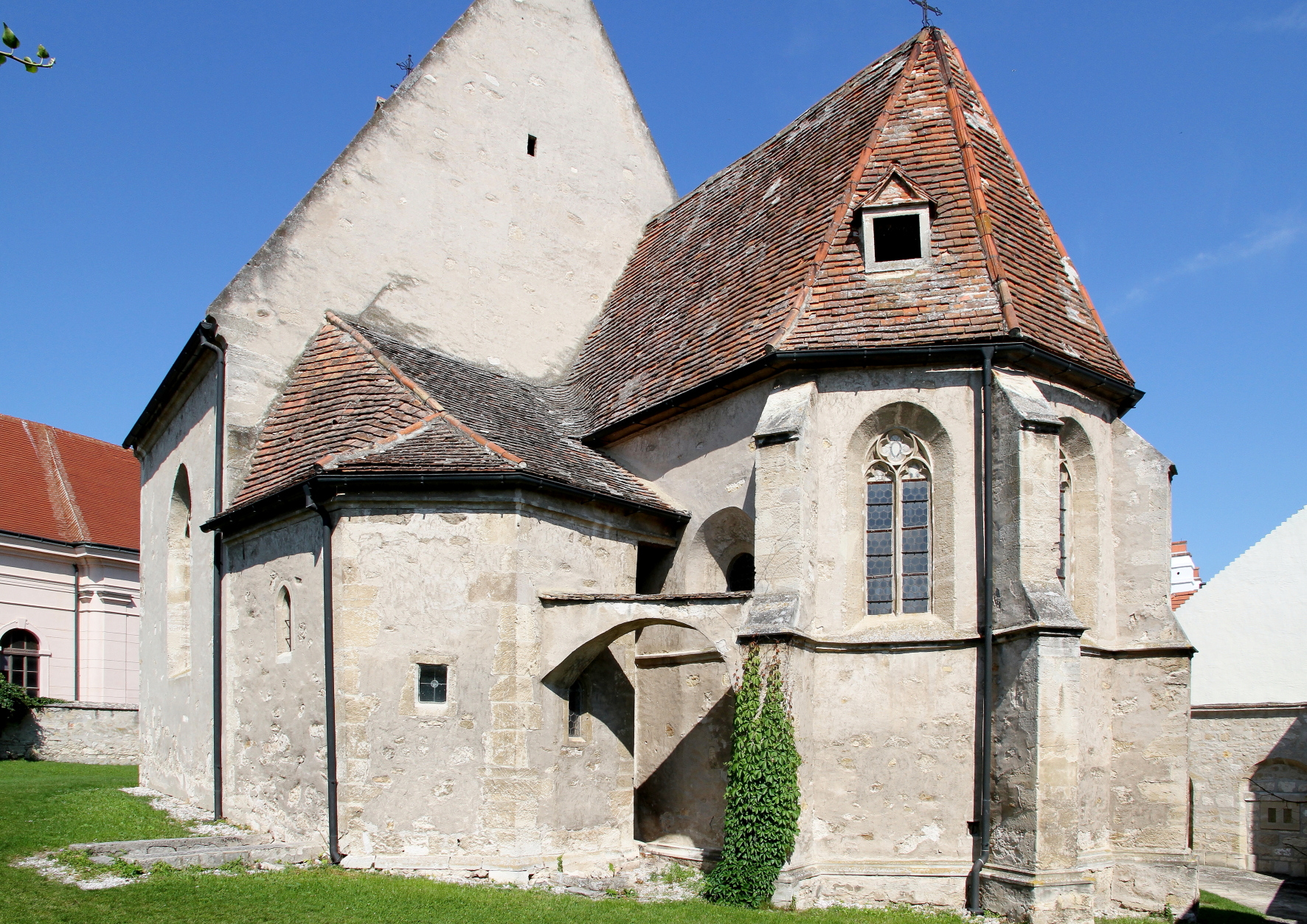 On the remains of a Roman watchtower, a Romanesque church was built in the 12th century, measuring six by eleven meters. The northern part of the western wall, the western part of the northern wall and the foundations of an apse are the remains of this original church building. In the second half of the 13th century, the Marienkapelle with crypt was added as an independent part to the south of the Romanesque apse; donated by Queen Maria of Hungary. Around 1400 the church was expanded to the east by removing the Romanesque apse and adding a Gothic choir with a ribbed vault. Around 1515 the south wall of the original church was torn down and the church building was expanded to include the Marienkapelle. In 1563 a sacristy was added to the north and an organ loft was added in 1570 .

The Gothic church tower was destroyed during the first Turkish siege in 1529, rebuilt in 1575 and rebuilt in 1719; It collapsed in 1879 and was never rebuilt.

The high altar with the frescoes uncovered around 1950. 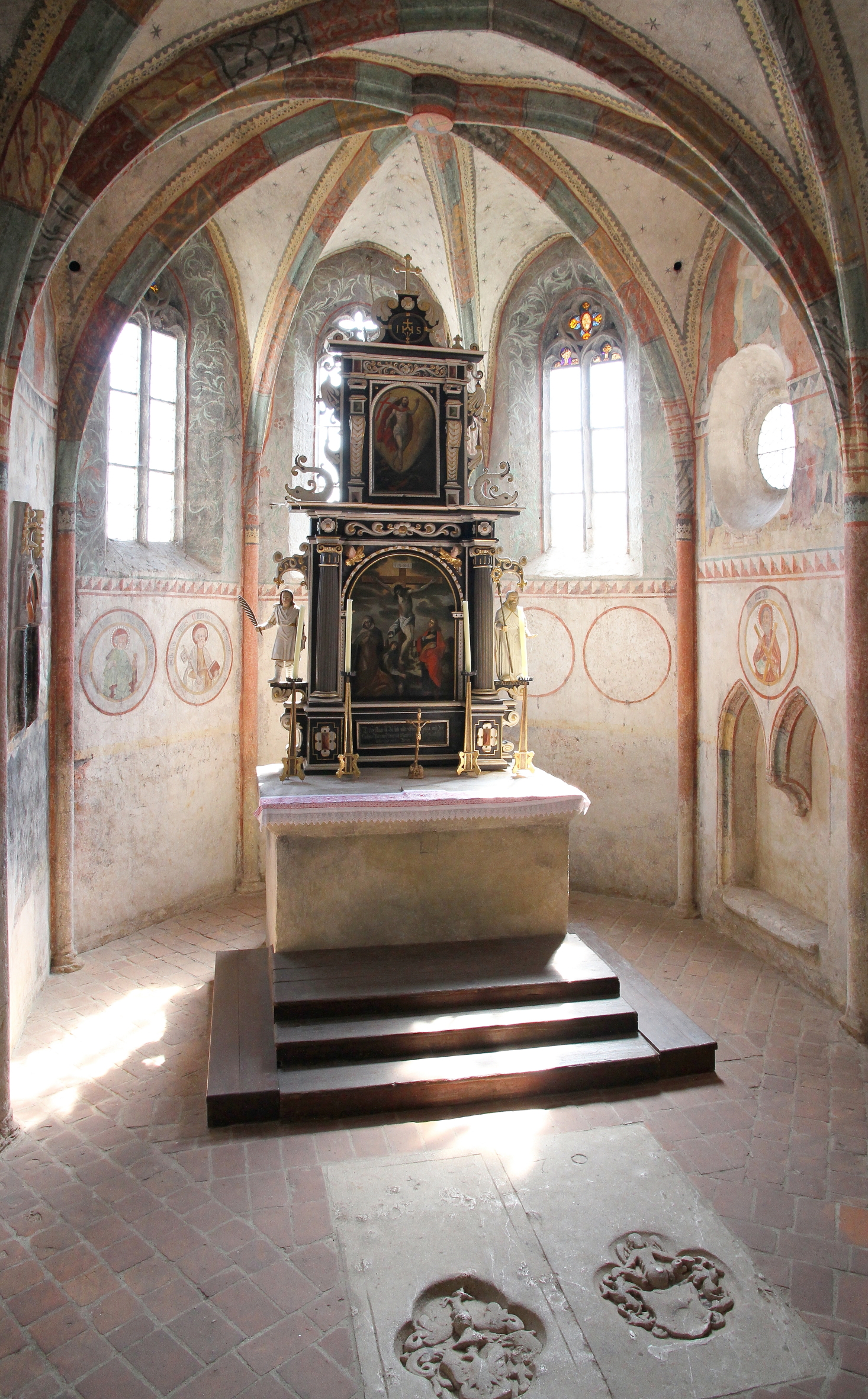 The high altar in the Pankratius choir is an early Baroque two-storey frame architecture with tendrils attached to the side and marked 1642. The altarpiece shows the crucifixion with Mary, Magdalena and John and the top picture shows the resurrection of Christ. The two side figures represent St. Pankratius and Aegidius .

The three saints altar, a side altar in the Pankratius choir, is a late Gothic figure shrine.

The organ from 1705 was created by an unknown builder and is the oldest playable organ in Burgenland. It has five registers and a purely mechanical sliding drawer. 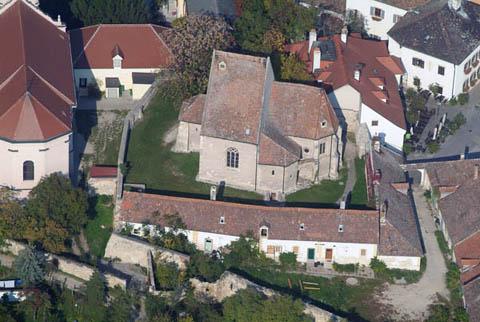