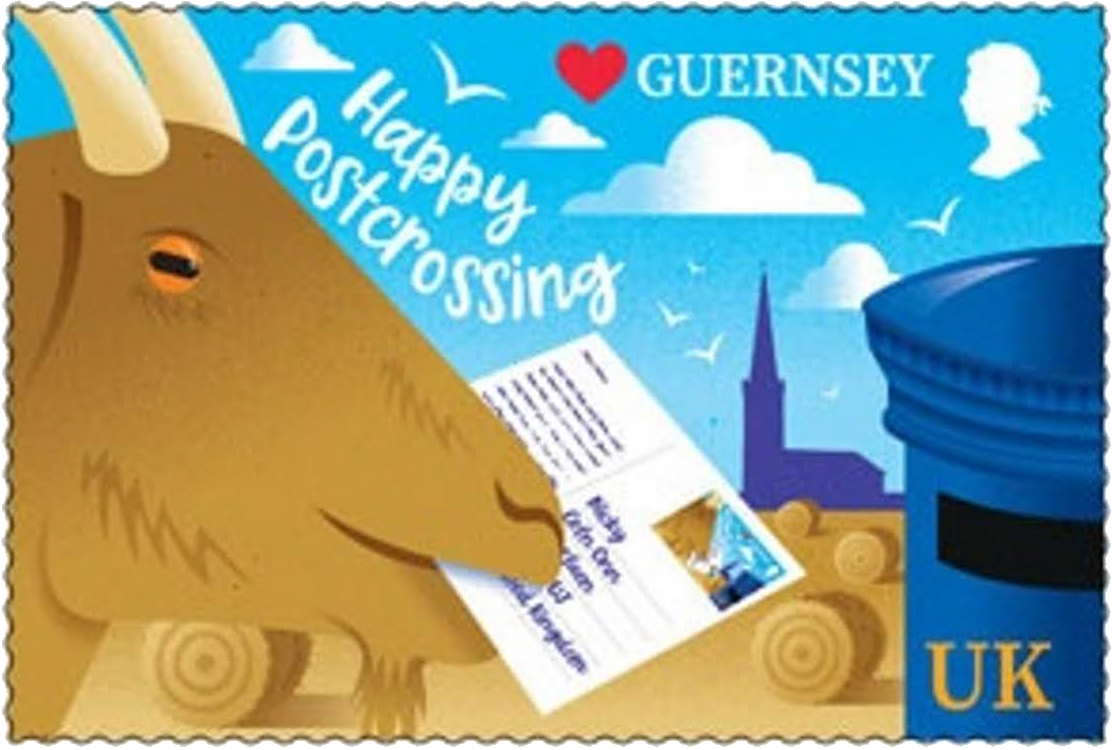 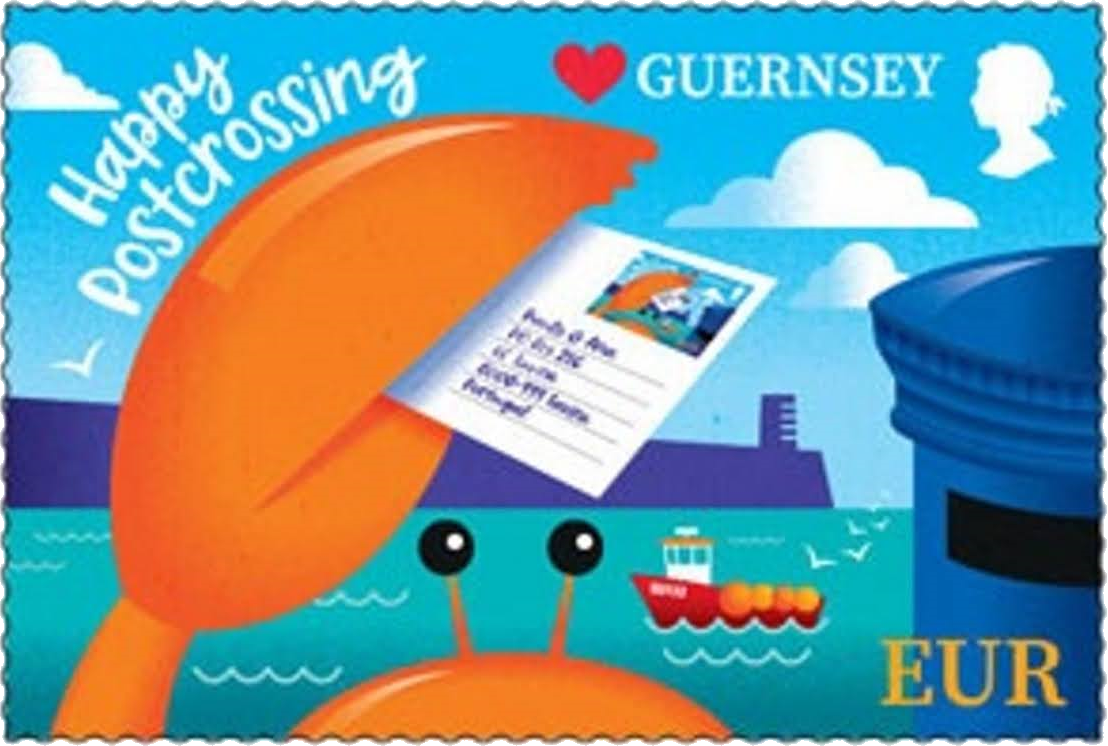 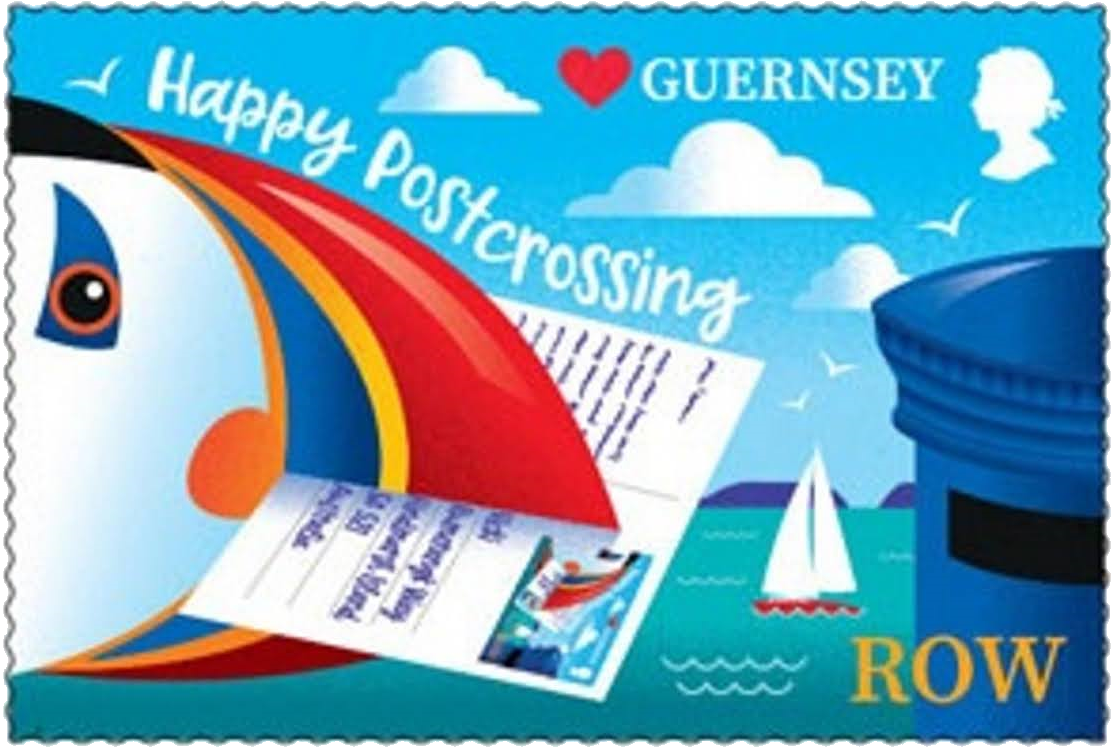 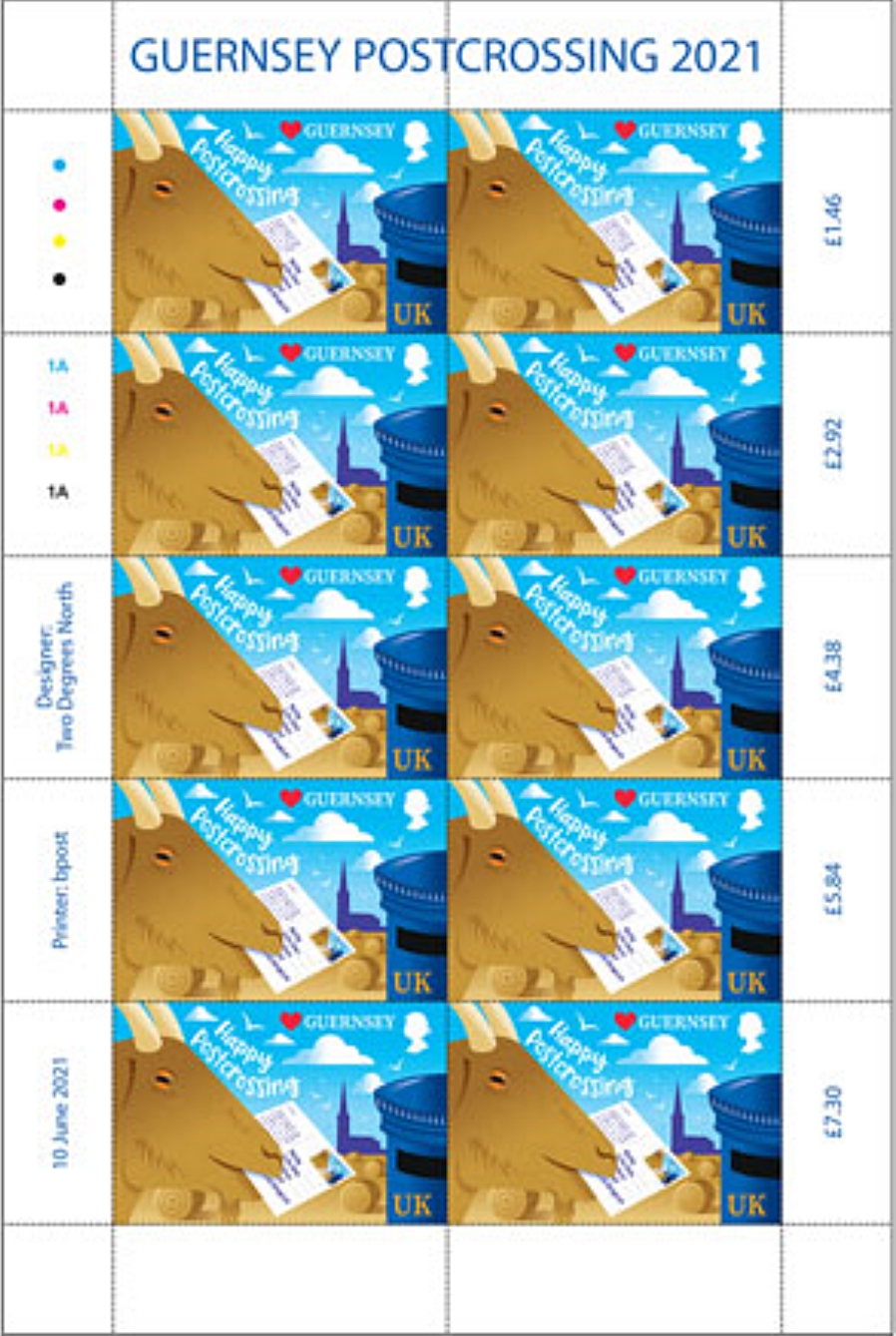 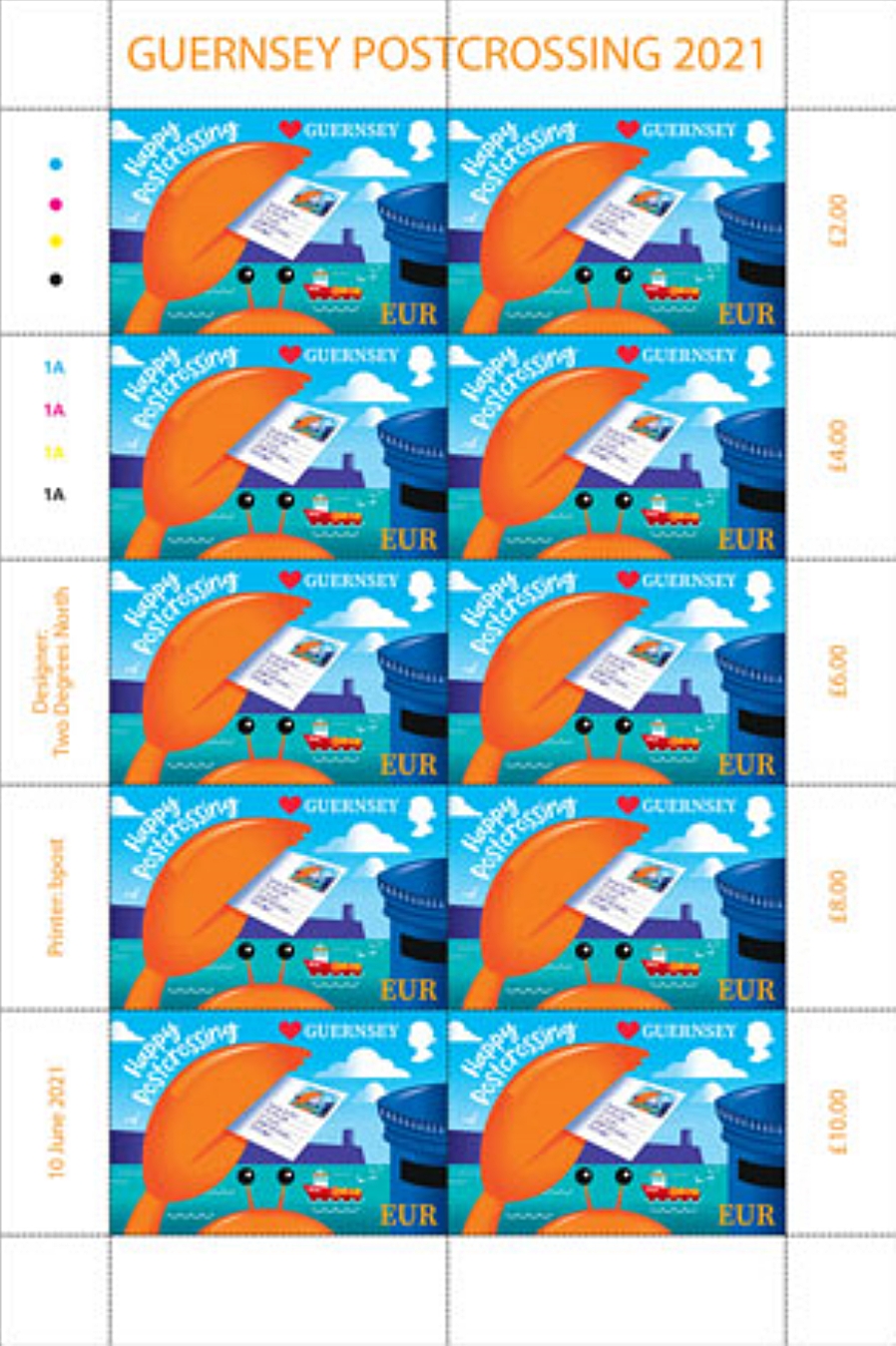 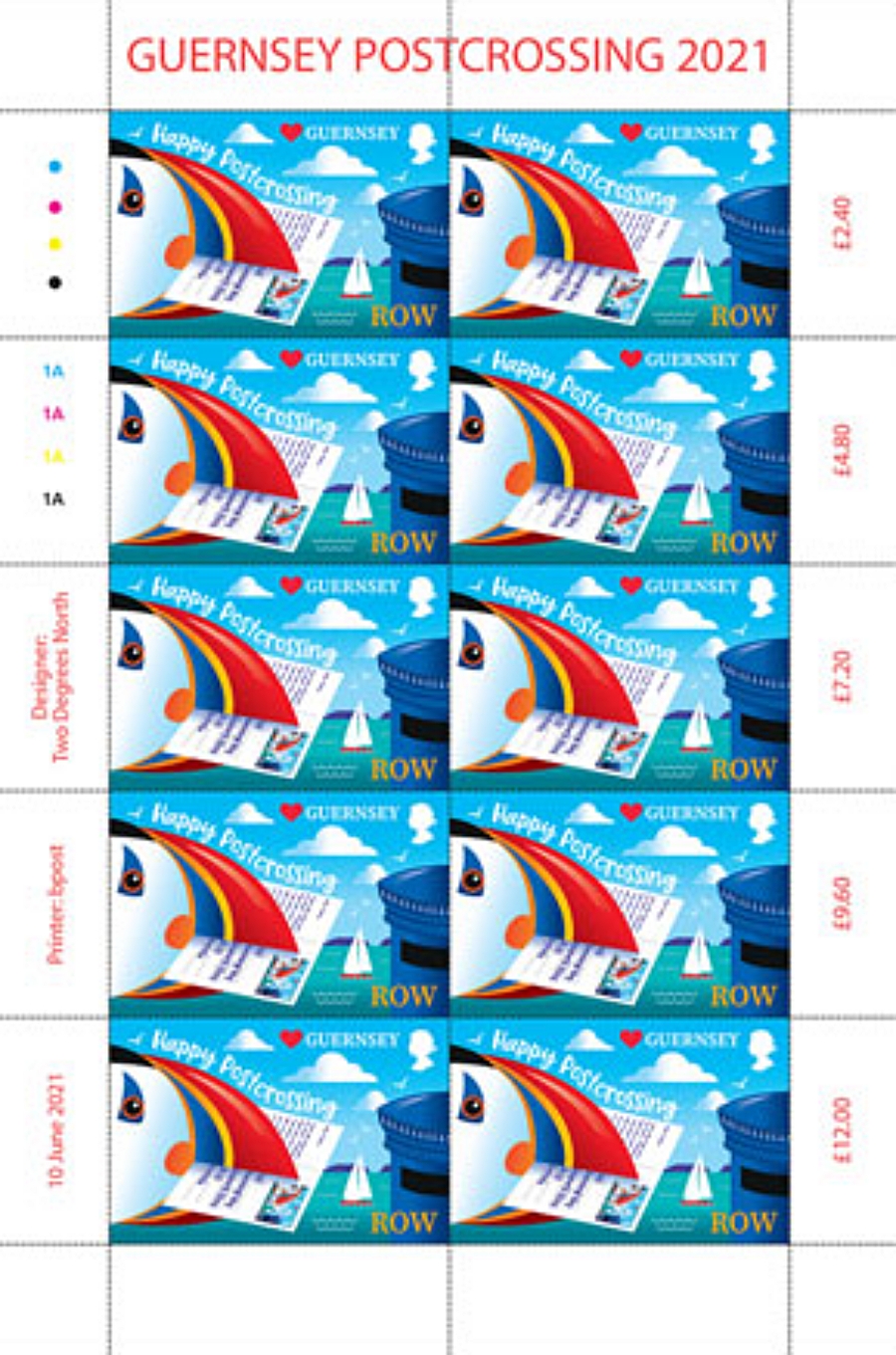 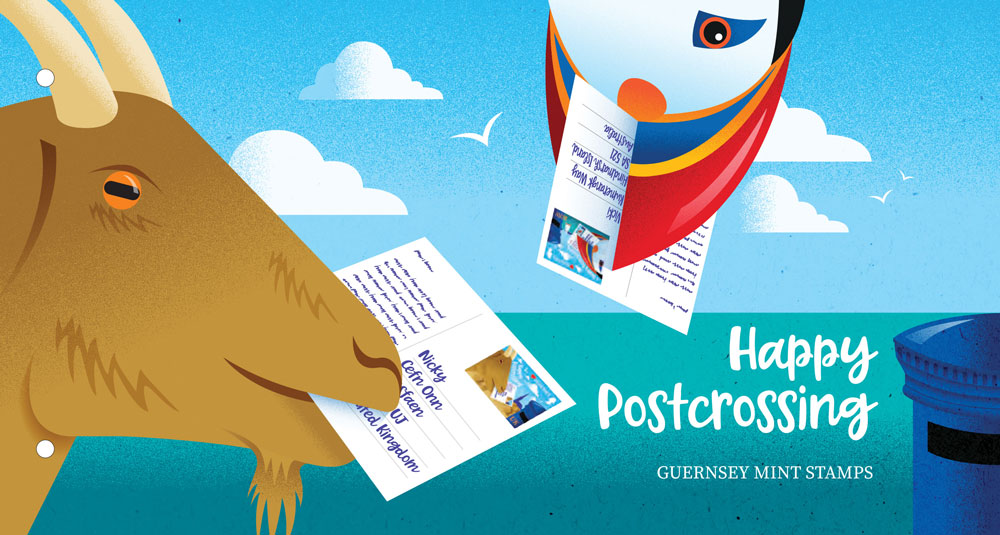 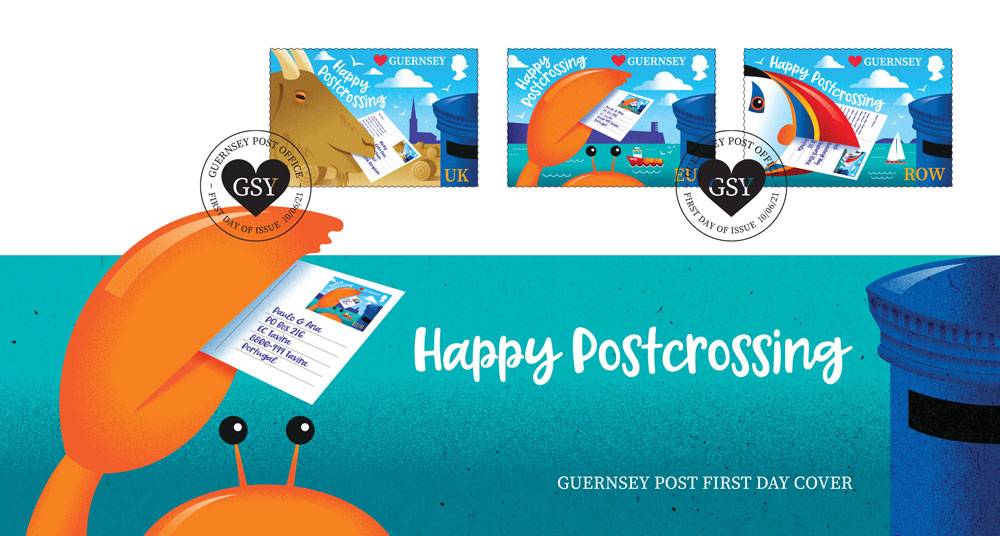 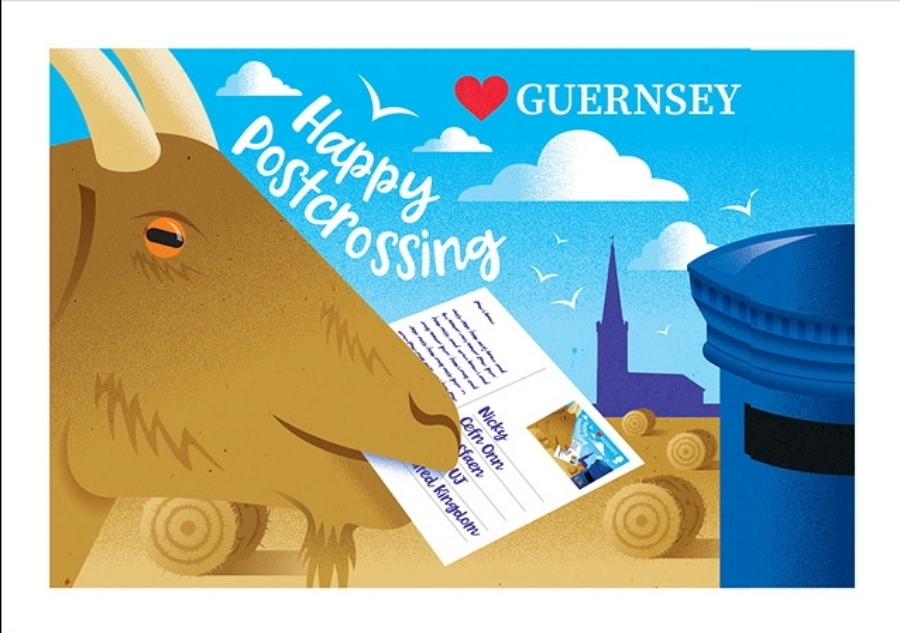 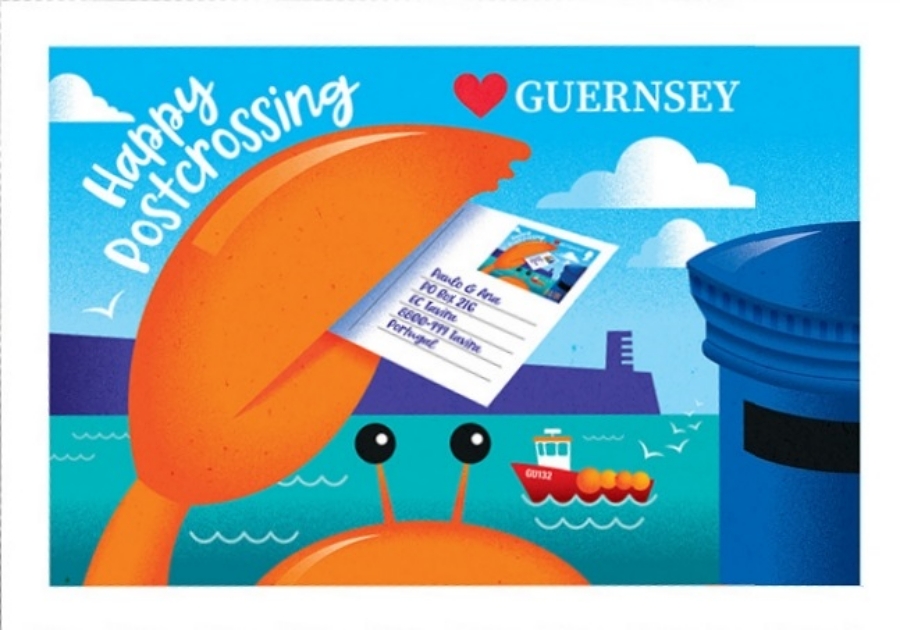 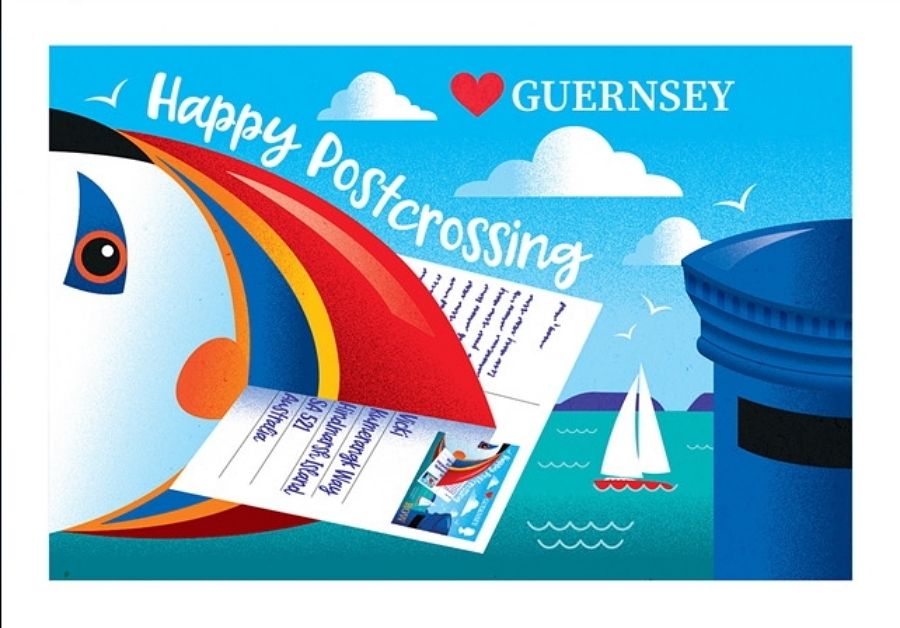 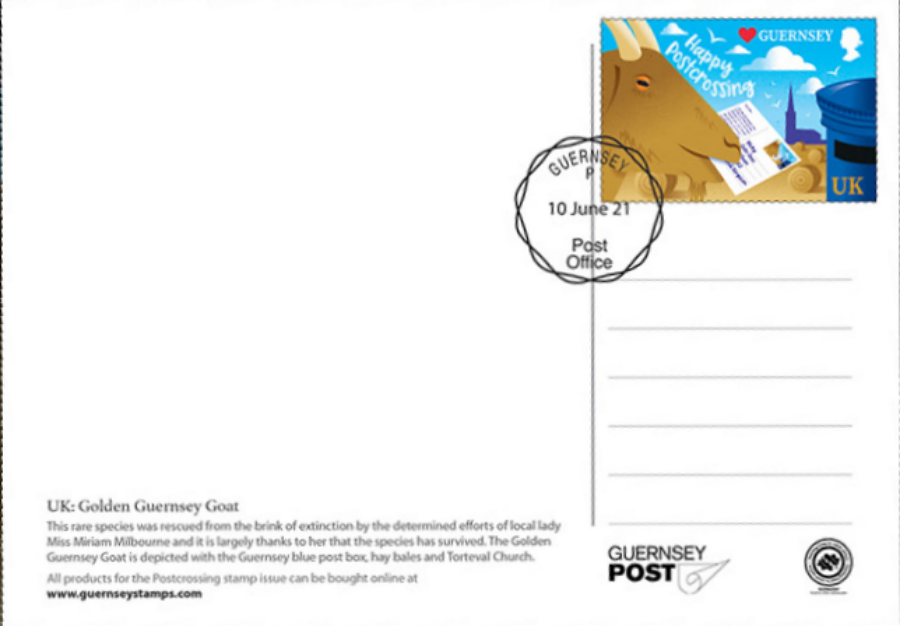 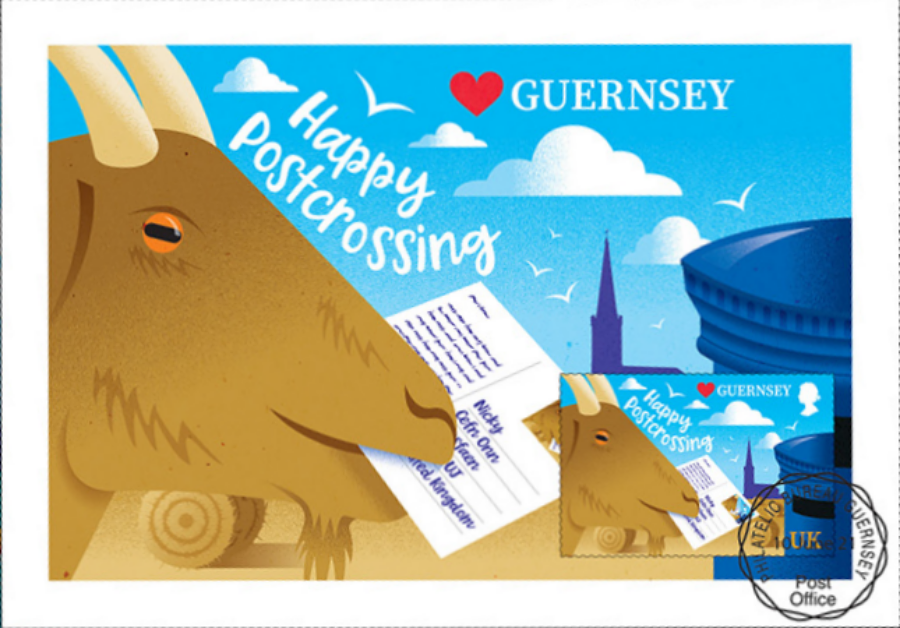 Guernsey Post’s philatelic bureau is delighted to announce that it will issue three stamps in celebration of Postcrossing, a hobby enjoyed by over 800,000 people worldwide, which celebrates its birthday on 14 July (stamp issue date: 10 June 2021).

Each of the colourful ‘Happy Postcrossing’ stamps, designed by Chris Griffiths of Guernsey-based agency Two Degrees North, depicts iconic Guernsey animals mailing postcards into the island’s distinctive blue post boxes – a Golden Guernsey Goat with Torteval Church in the background; a Guernsey Chancre Crab against the backdrop of Pleinmont Observation Tower; and a Herm Puffin with the islands of Herm and Jethou in the background.

Bridget Yabsley, head of philatelic at Guernsey Post: – “As Postcrossing approaches its birthday, we are delighted to release three stamps in celebration of this unique hobby and its achievements in connecting people around the world, resulting in friendships sometimes formed across borders or even continents.”

Paulo Magalhães, who founded the Postcrossing project in 2005, commented: – “It’s an absolute joy to see such fun stamps come to life on Postcrossing’s anniversary. We cannot wait for them to start making their way around the world on Guernsey postcards, like miniature ambassadors for the island.”

The Postcrossing stamps and other products, including maxi cards, are available to preorder from 27 May at www.guernseystamps.com or by calling Philatelic Customer Services on +44 (0)1481 716486.

Postcrossing’s founder, Paulo Magalhães, began his project in 2005. He loves to receive mail, especially postcards, and knew that many people shared his interest and wanted to connect with each other.

By setting up the Postcrossing project, Paulo enabled anyone to exchange postcards with random people around the world. The premise is simple: for every postcard you send, you’ll receive one back from another postcrosser— so the more you send, the more you will receive.

After more than a decade, Paulo’s initiative is still going strong and has grown to over 800,000 postcrossers in 215 countries. An incredible 60 million postcards have been sent through Postcrossing since it began.

As Postcrossing celebrates its birthday on 14 July, we are delighted to release three colourful ‘Happy Postcrossing’ stamps depicting iconic Guernsey animals that can be found on the Bailiwick: the Golden Guernsey Goat with Torteval Church in the background; a Guernsey Chancre Crab against the backdrop of Pleinmont Observation Tower; and a Herm Puffin with the tiny islands of Herm and Jethou in the background.

“It makes the world smaller and more available; you can get a postcard from anywhere in the world! And I love the feeling of waiting for the unexpected… which country this time? Which continent? It’s just amazing how the world can be connected by sending ‘pieces of paper with photographs on it’.”

Postcrossing is the union of the words “postcard” and “crossing” and its origin “is loosely based on the Bookcrossing site”. However, the “crossing” or exchange of postcards works in a different way. A member sends a postcard to another postcrosser and receives a postcard back from a random postcrosser. Exchanges between the same two members only occur once; although direct swaps between members happen, they are not part of the official happenings on the site. The project is completely free and anyone with an address can create an account. The postcards and postage fees to mail them are the responsibility of each user.

As of April 2021, Postcrossing has over 800,000 members in 208 countries who have registered and exchanged over 61 million postcards that traveled over 308 billion kilometers.

The highest concentration of Postcrossing members reside (in order) in Russia, Taiwan, China, the United States, Germany, the Netherlands, Poland, Belarus, Ukraine, and the Czech Republic, each with over 20,000 members. Globally, most postcrossers reside in North America, Europe and East Asia. Of particular note, Postcrossing is popular in eastern European and former-Soviet states. As of January 2019, more than one third of the combined total of postcards were sent from Germany, Russia and the United States.

If a member sends a postcard they will receive at least one postcard back from a random postcrosser somewhere in the world.

Initially each member can have up to five postcards traveling at any time. Every time one of the sent postcards is registered, that postcrosser can request another address. The number of postcards allowed to travel at any single time goes up the more postcards a member sends and stops at 100.

A small percentage of mailed postcards get lost during their travels, while others may arrive with the postcard ID unreadable and are difficult to register. There are also members who become inactive while postcards are on the way to them. The system behind the website accounts for all these factors and compensates active members by attempting to reduce the difference between the number of sent and received postcards of each member.

The idea for the project was created by Paulo Magalhães, who started the site on July 14, 2005. The motivation was based on the fact that he liked to receive mail, especially postcards. “The element of surprise of receiving postcards from different places in the world (many of which you would probably never have heard of) can turn your mailbox into a box of surprises – and who wouldn’t like that?”

The project started initially as a hobby for Magalhães, but its unexpected success revealed that the idea was more popular than he ever predicted. He initially hosted the project on an old computer housed in a clothes closet at his home, which was shown to be insufficient. Based on word of mouth, the project quickly expanded over the Portuguese borders where the project was developed.

Over time the project received attention from the media, which contributed to its growth and popularity. Postcrossing reached its first million exchanged postcards on April 11, 2008 and has since grown even more rapidly. It reached the second million on February 26, 2009 with a postcard that traveled from Germany to Norway. The third million was reached on September 24, 2009 with a postcard traveling from Finland to Slovenia. The fourth million was reached on March 28, 2010 with a postcard traveling from the Czech Republic to the Netherlands.

Postcrossing.com celebrated its five-year anniversary on July 14, 2010 with a photography contest for its members. Shortly after celebrating their fifth birthday, Postcrossing.com reached 5,000,000 postcards received on August 24, 2010 with a postcard traveling from Isle of Man (registered under an Italian member) to Thailand. The 7,000,000th postcard was sent on April 5, 2011 from China and received on April 19, 2011 in the Netherlands. The 10,000,000th postcard traveled from Japan to Germany and was registered on January 27, 2012. The 15,000,000th postcard traveled from Germany to Italy and was registered on December 31, 2012. At the moment, 1,000,000 postcards are registered in about two months. In January 2017 the number of postcards passed 39 million. 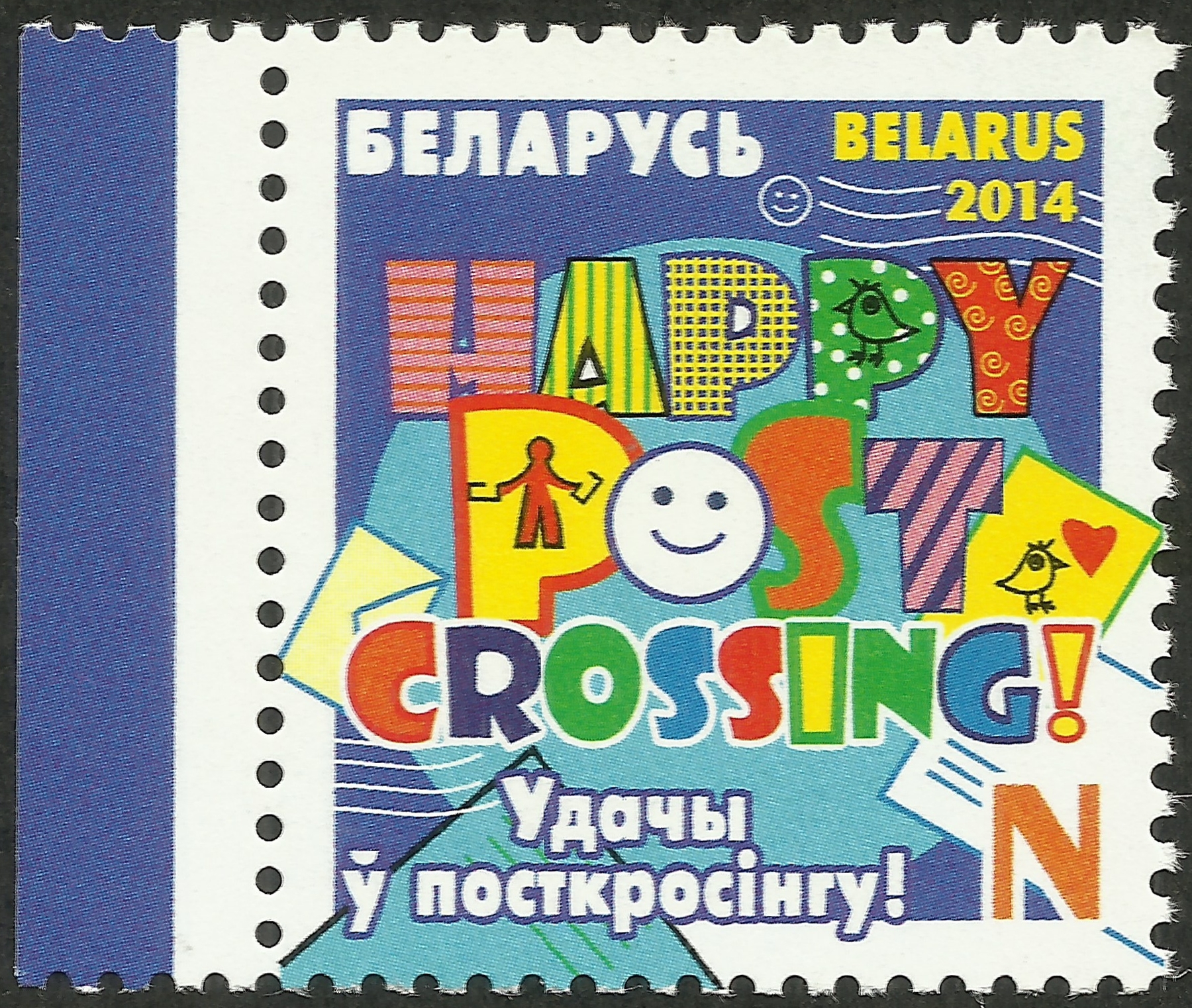 On October 11, 2011, PostNL released the first set of Dutch Postcrossing-themed stamps at the philatelic exhibition Postex in Apeldoorn. The sheet of 10 stamps was designed by communication agency The Stone Twins, and depicted different types of postcards seemingly strewn about (as if scattered on a doormat).

Finland was the second country to follow suit, with Itella launching their own stamps in honor of Postcrossing on September 9, 2013. Designed by Kokoro & Moi, the set includes four different first-class stamps.

On January 2, 2014, Belposhta also launched their own Postcrossing-themed stamps in Belarus. The stamp was designed by Inga Turlo and features the words “Happy Postcrossing” in both English and Belarusian.

On May 28, 2014, Guernsey Post launched a stamp designed by their marketing team, featuring the words “Happy Postcrossing” over an outline of Guernsey with a smiley face, giving the “thumbs-up” to the hobby of Postcrossing.

On January 27, 2015 the Russian Post issued a stamp designed by Olga Shushlebina. The stamp features the words “Я ❤ посткроссинг” (Russian: “I ❤ postcrossing”) and schematic pictures of world sights. 2015 also saw Slovenia issue a stamp, as did the Czech Republic and the Ukraine.

On March 25, 2016 the Russian Post again issued a stamp featuring the same words designed by I. Sidenko. Further Postcrossing stamps were issued on March 29, 2016 by PostNL, another two in 2016 by Guernsey Post, Austria [95] and a 5zl by Polish Post.

Belarus will issue another Postcrossing-themed stamp for release on July 10, 2021. 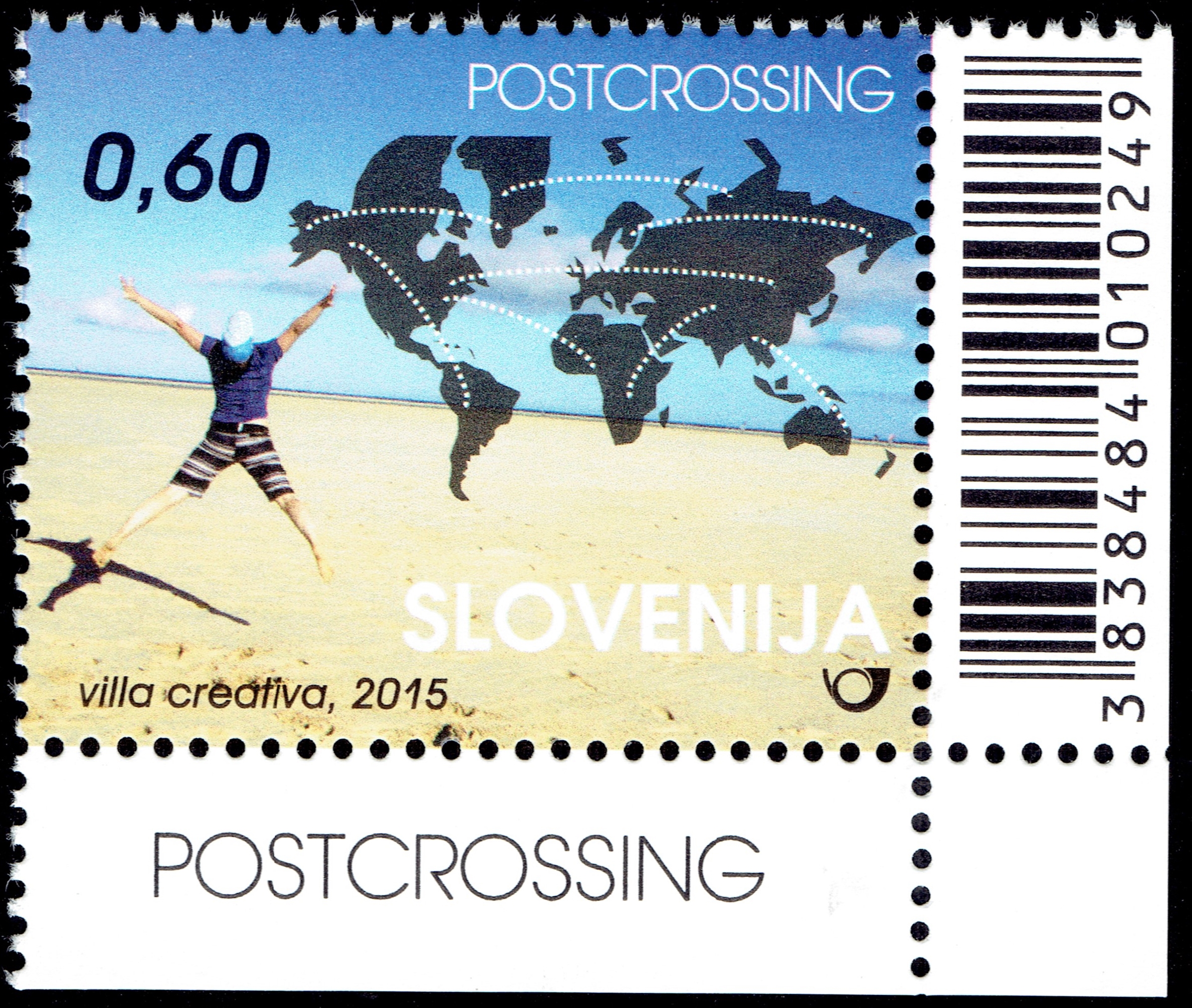 In 2019, Postcrossing organised a global campaign to raise awareness and celebrate the postcard’s 150th anniversary on October 1. Through its community and contacts with postal operators, museums, libraries and other relevant organizations, numerous events took place around the world to mark the anniversary of the postcard. Among the events there were several postcard exhibitions, special cancelations marks, postcard writing workshops and seminars, commemorative postcards and some stamps were issued on the theme. Postcrossing also organised an exhibition at the Universal Postal Union (UPU) headquarters in Bern with postcards from all over the world with messages on why postcards are important.

A small postcard design competition for design and art students was organised and the best entry became the postcard of the event in 2020 which was made available for everyone to use. A lesson plan was also created in 8 languages to facilitate the introduction of postcards to young children in schools, providing them with their first contact with postcards.

On the first edition of the World Postcard Day in 2020, several events took place worldwide to celebrate the day. These included special cancellation marks by postal operators, the issue of commemorative postcards, several online postcard exhibitions, postcard writing workshops and many online meetings among postcard aficionados.