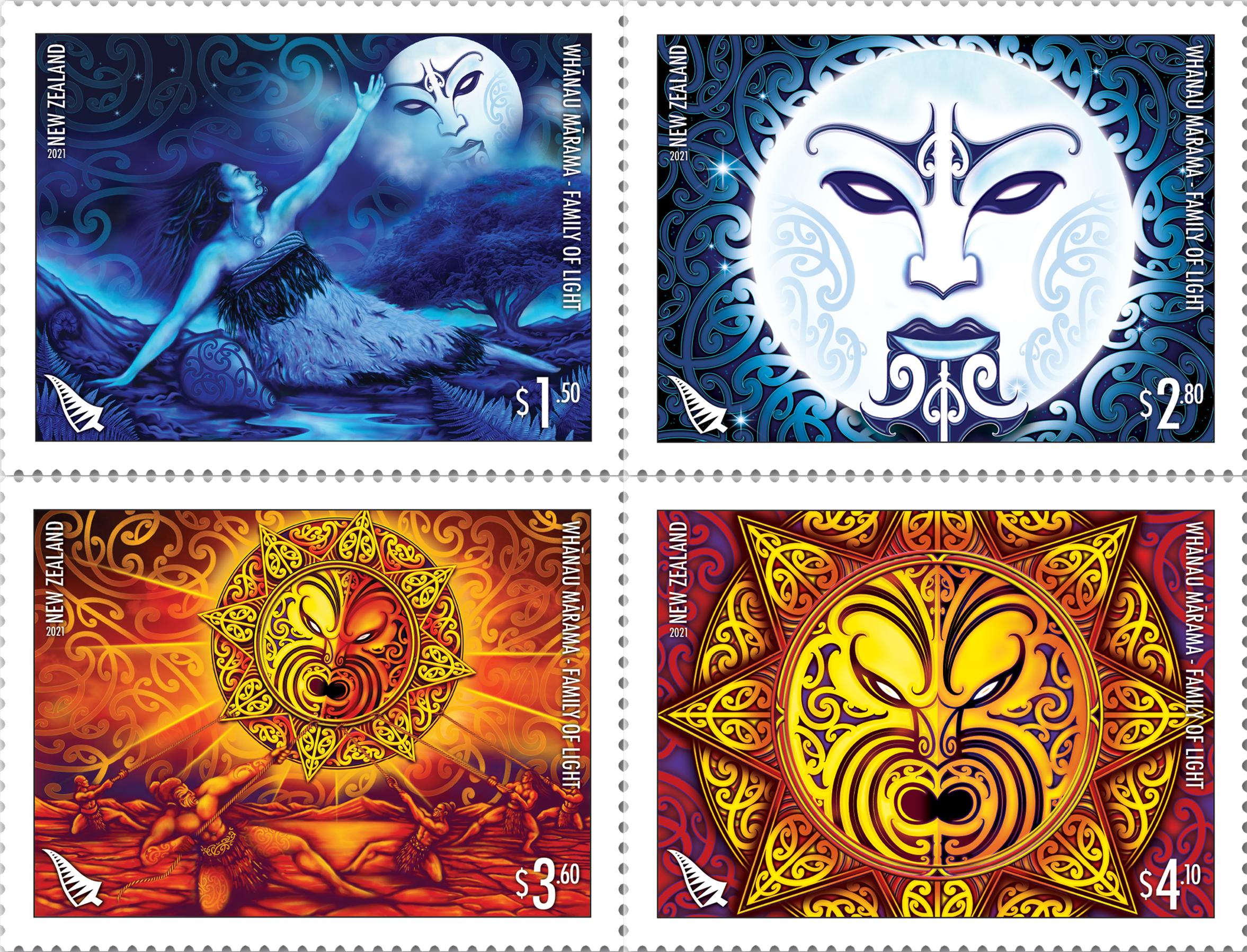 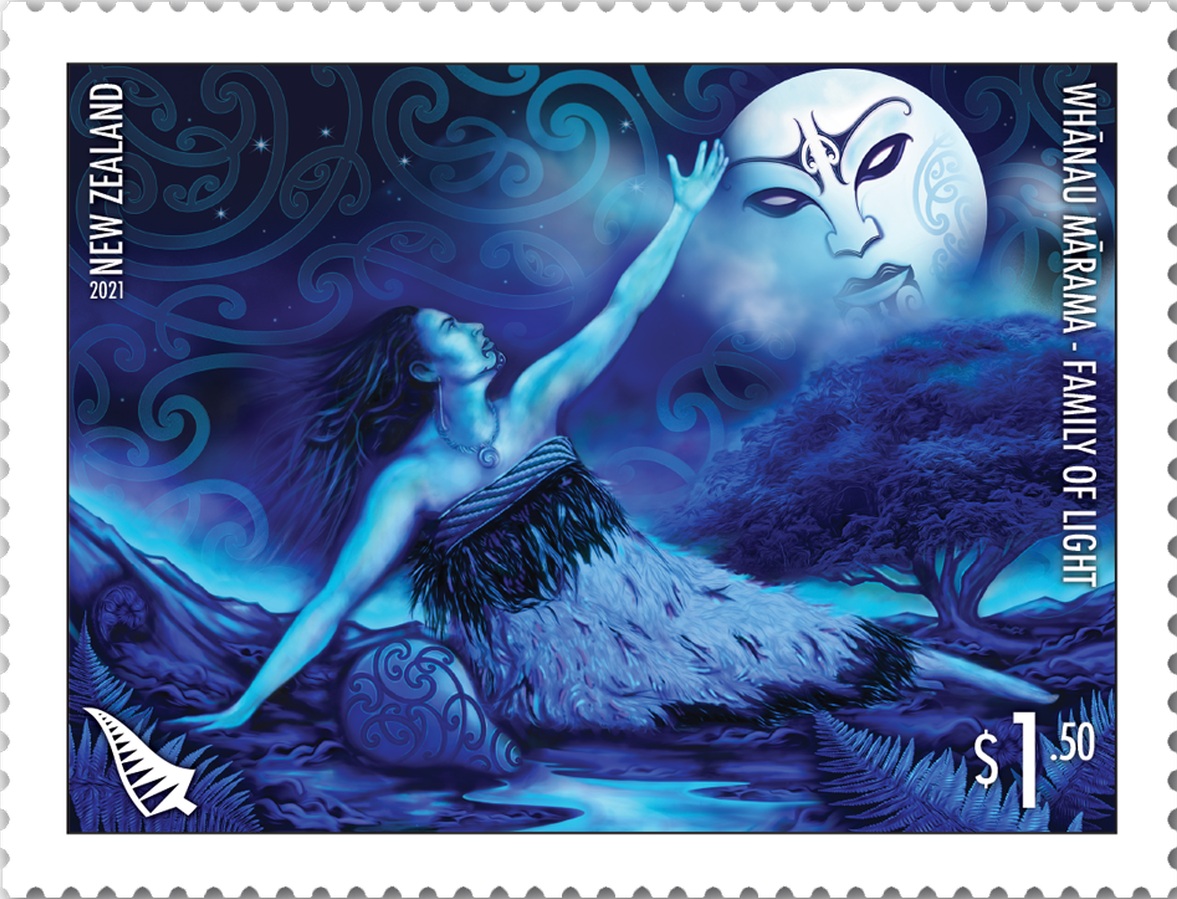 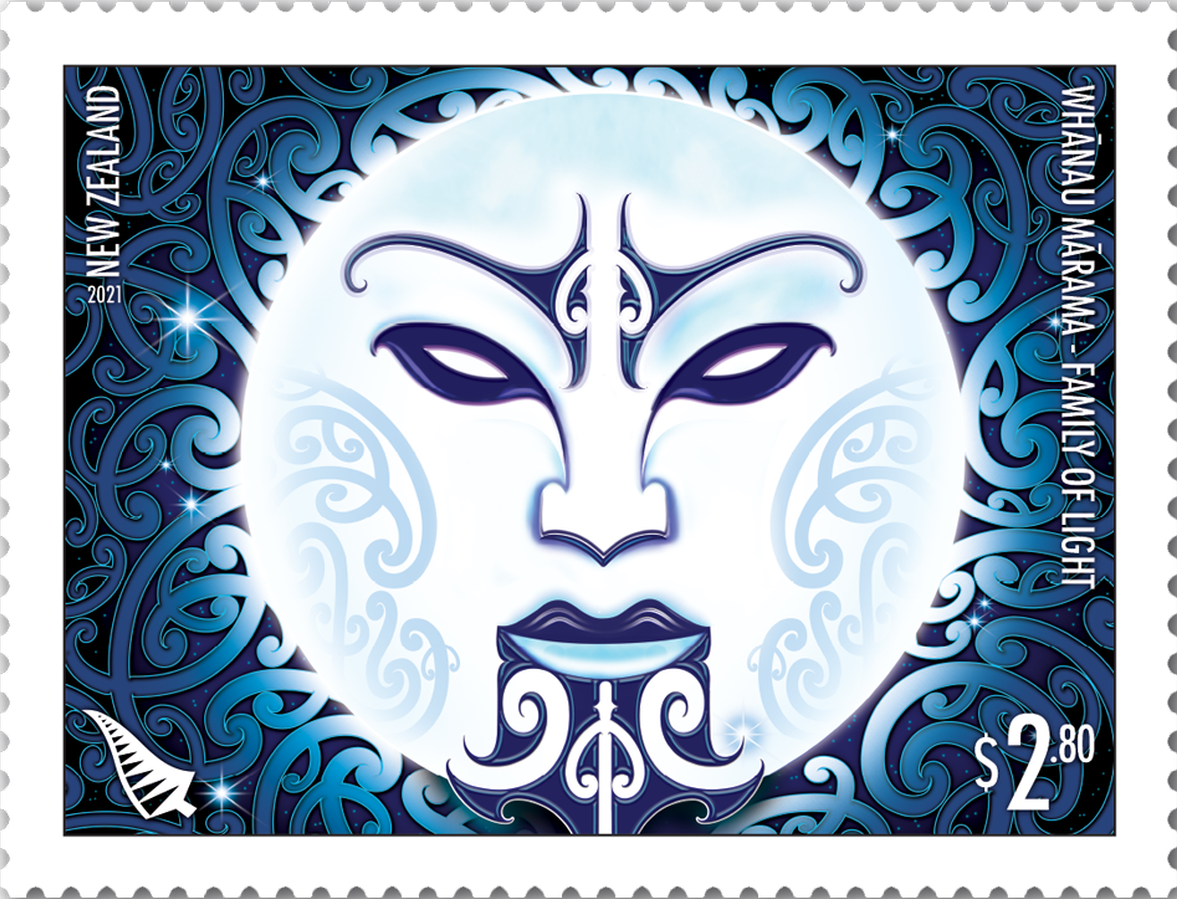 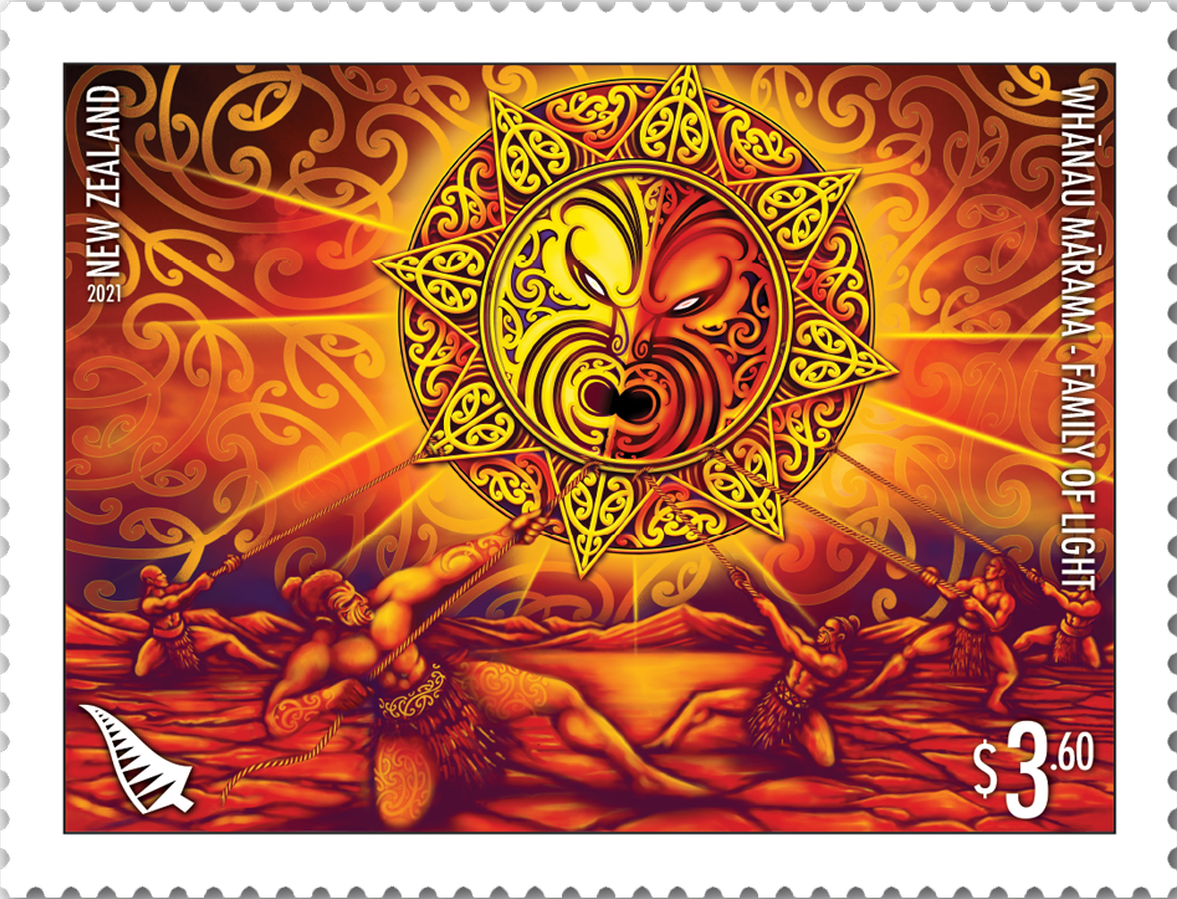 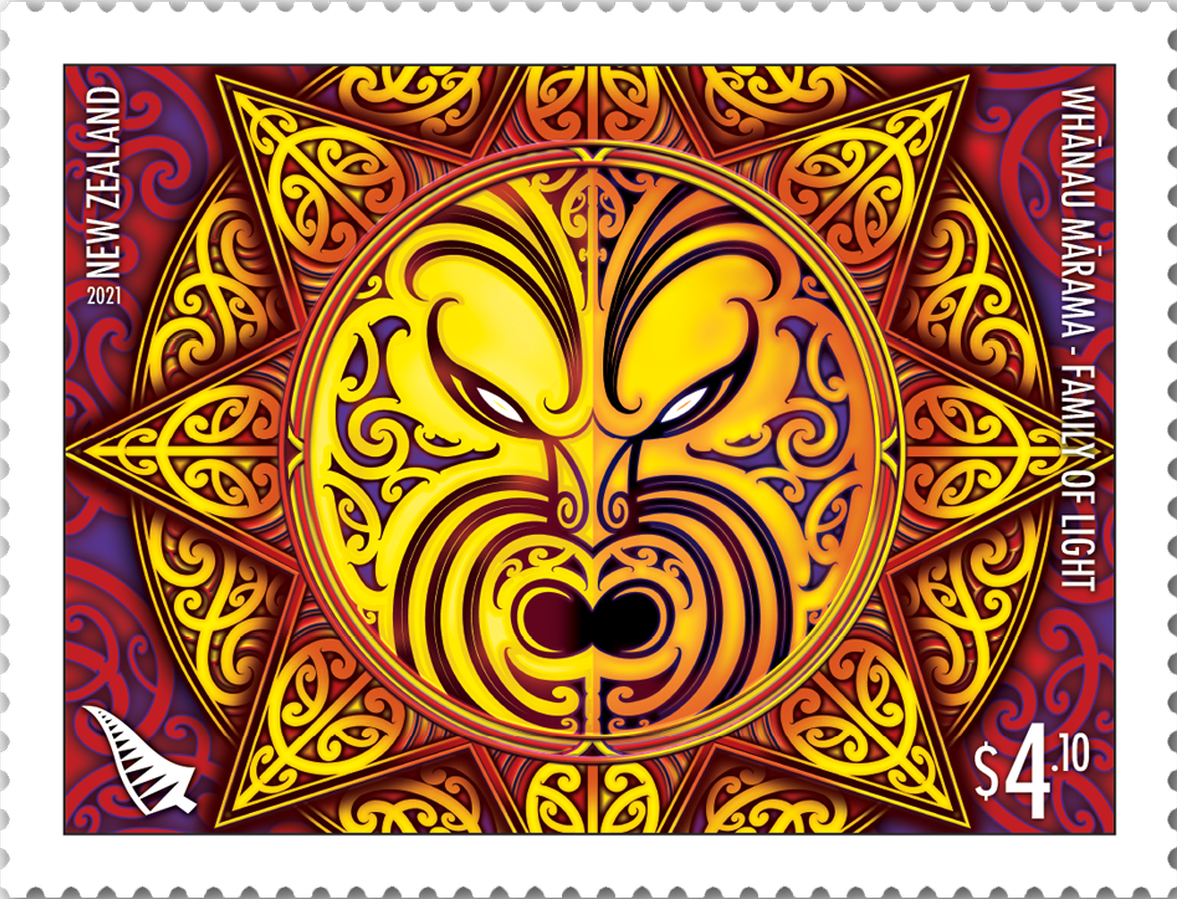 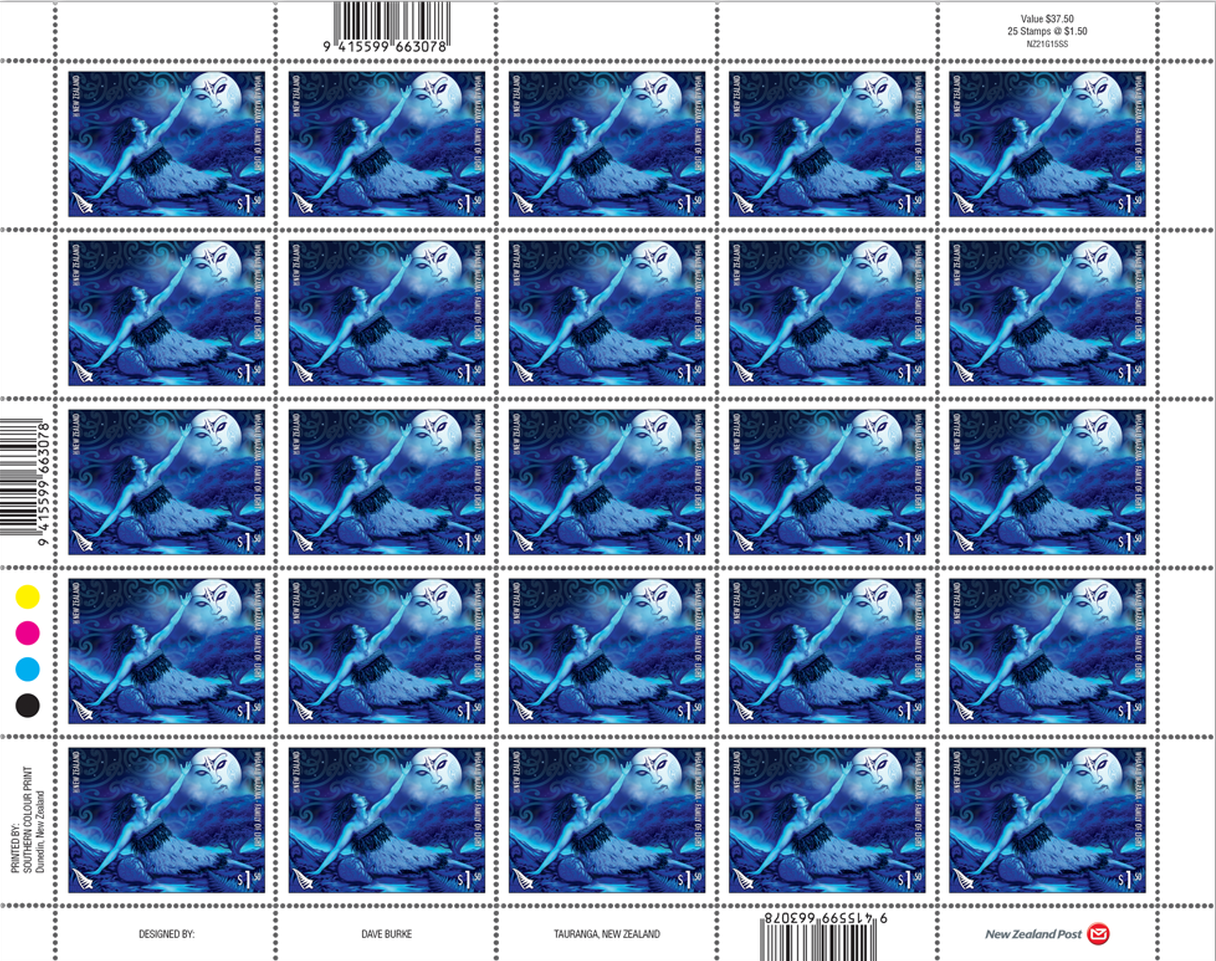 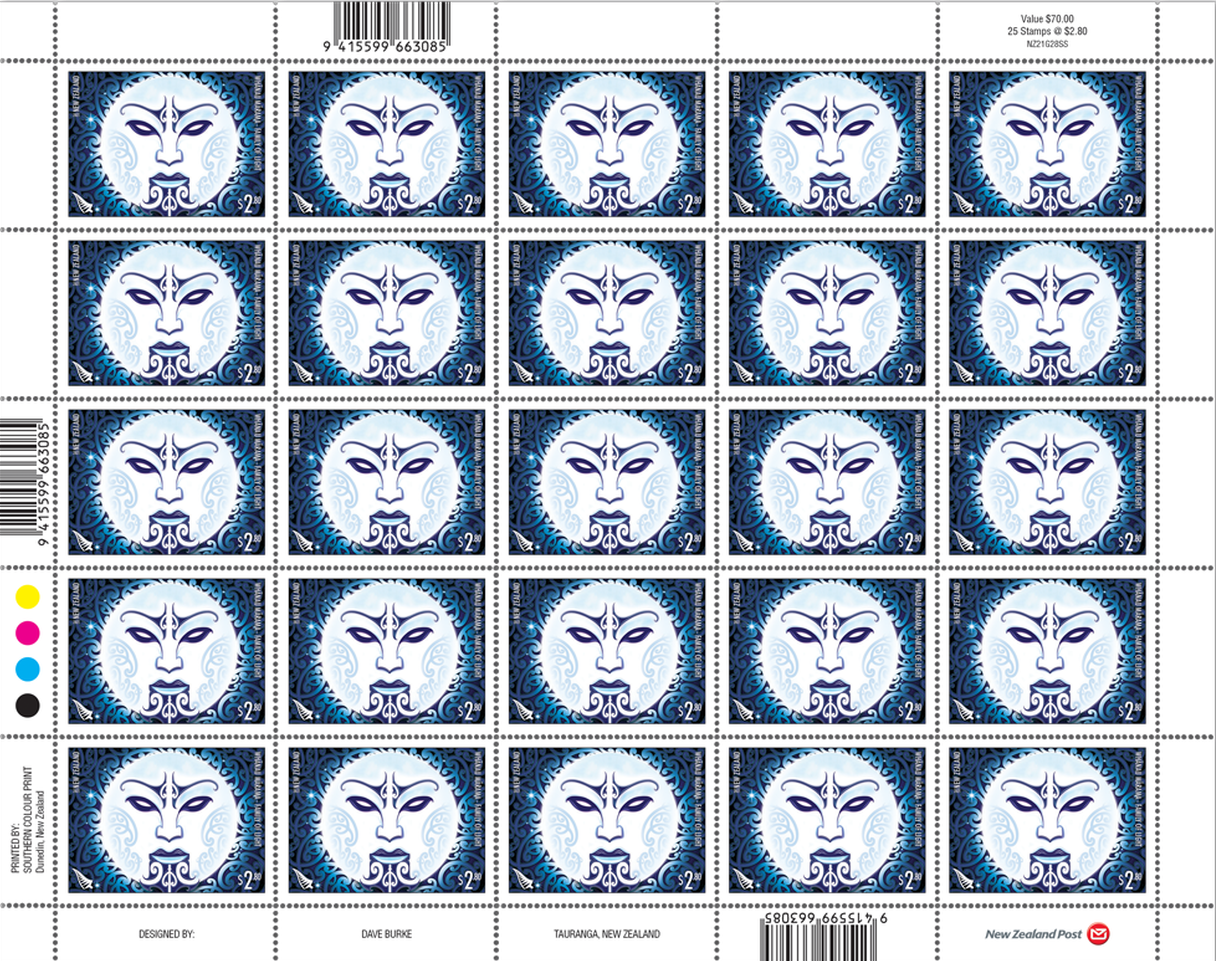 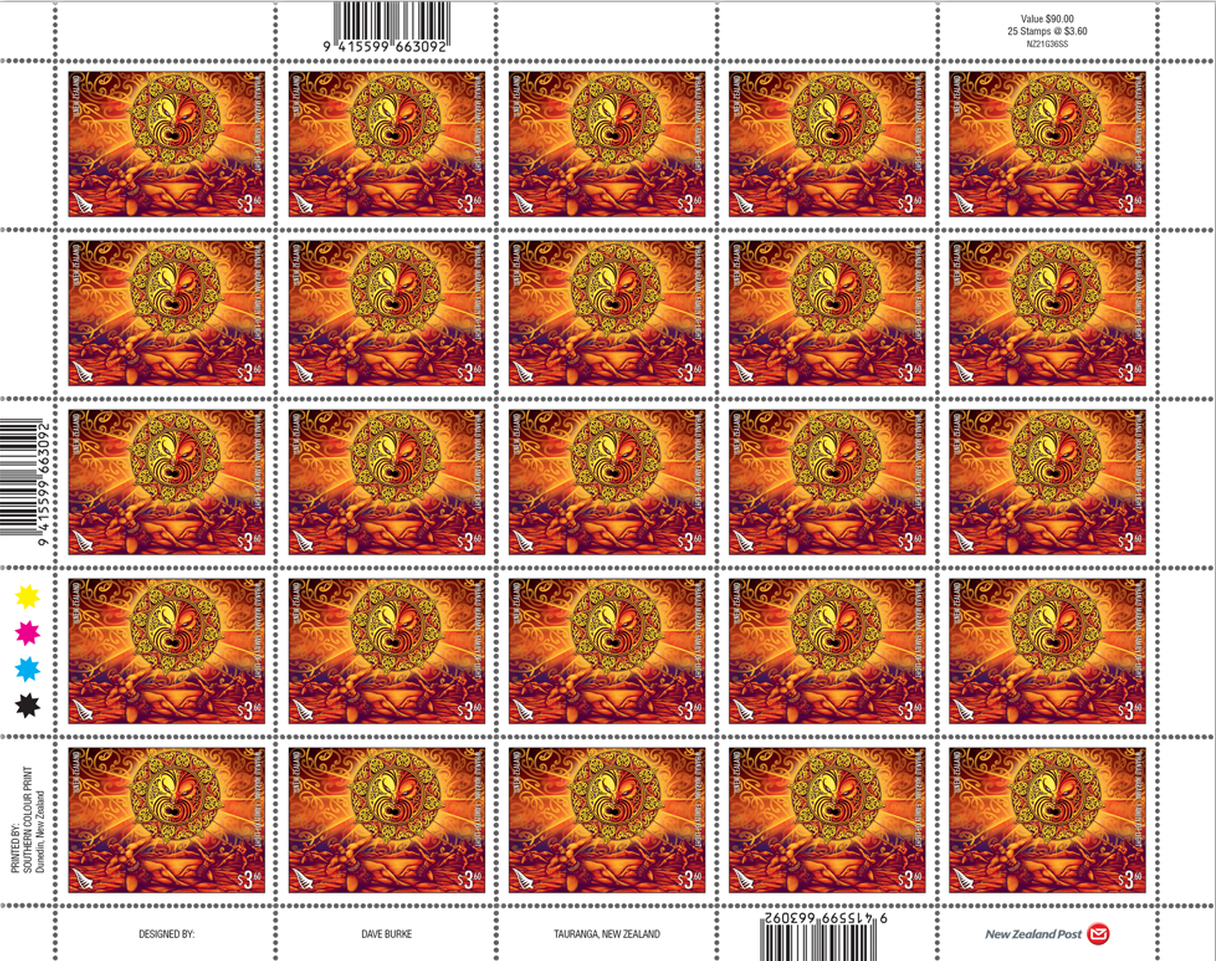 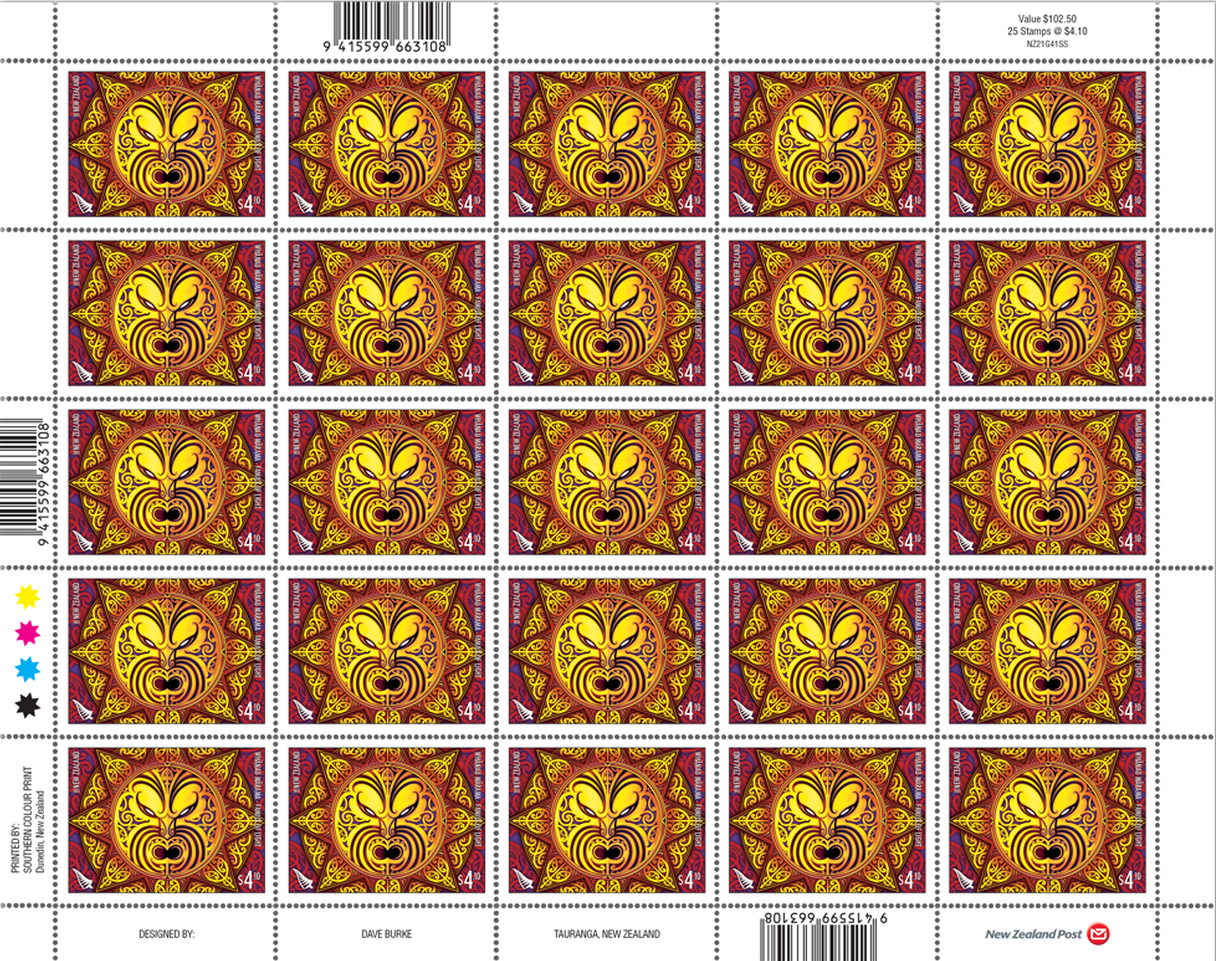 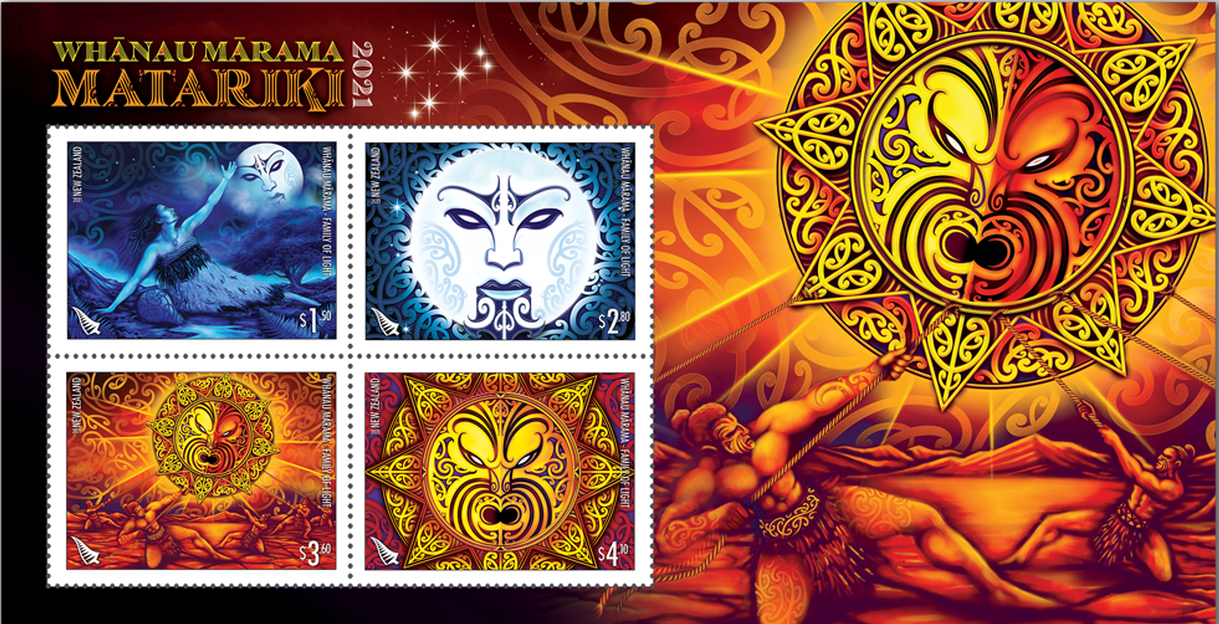 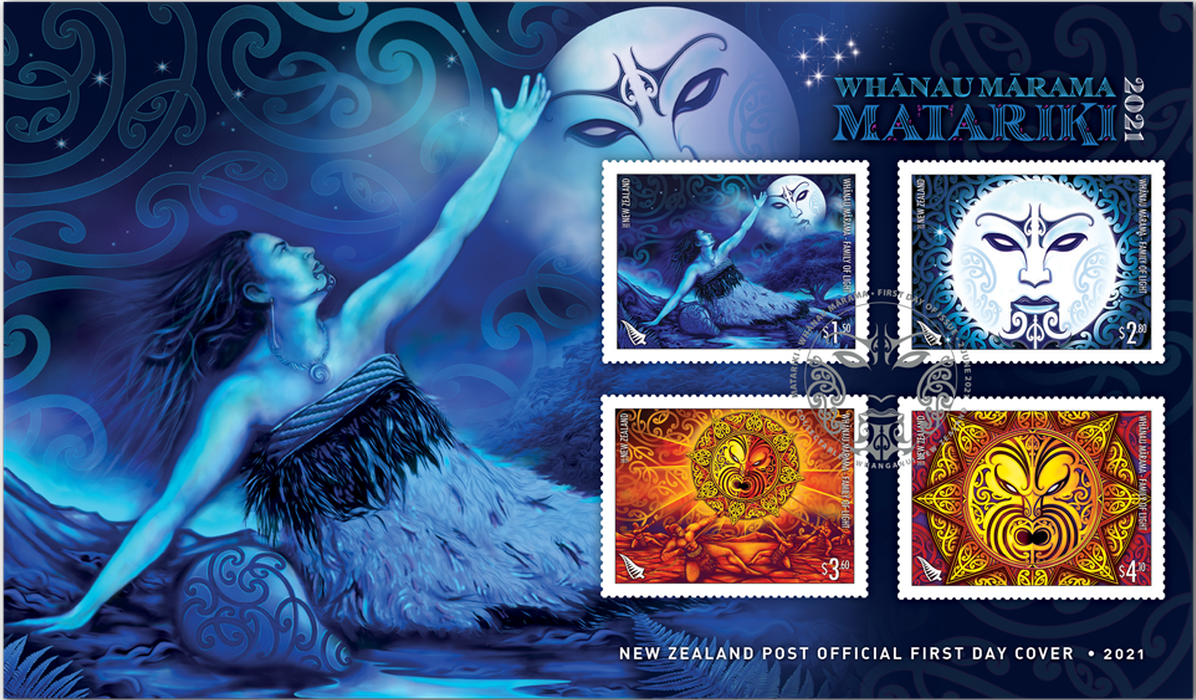 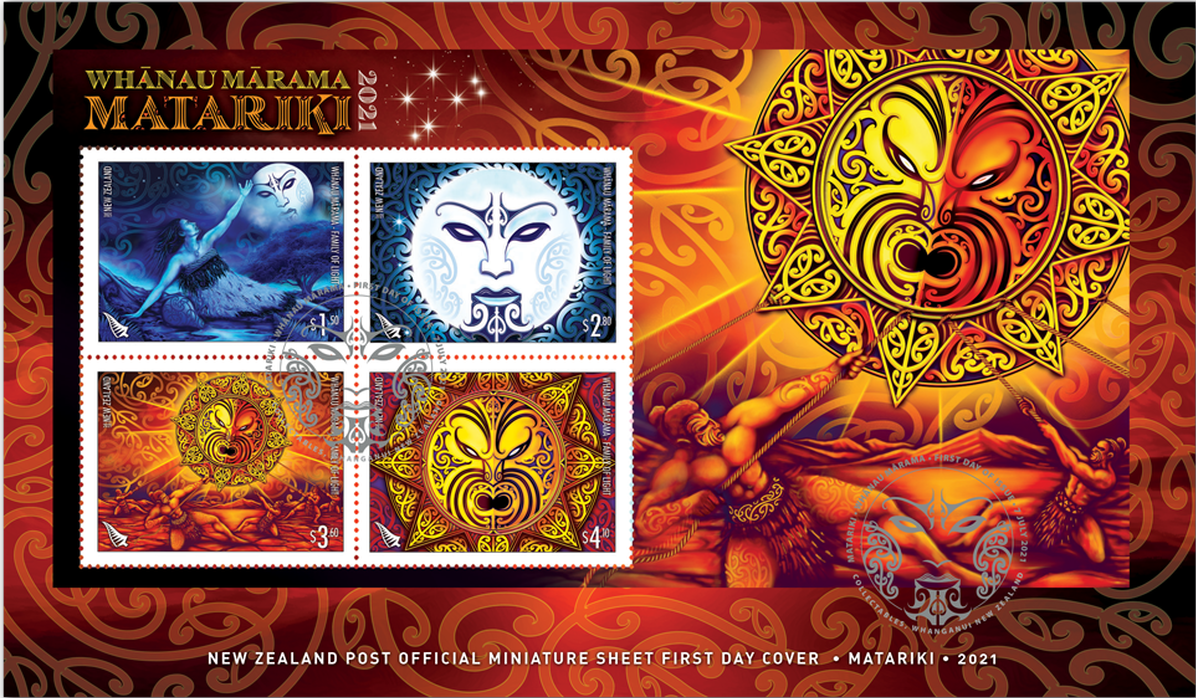 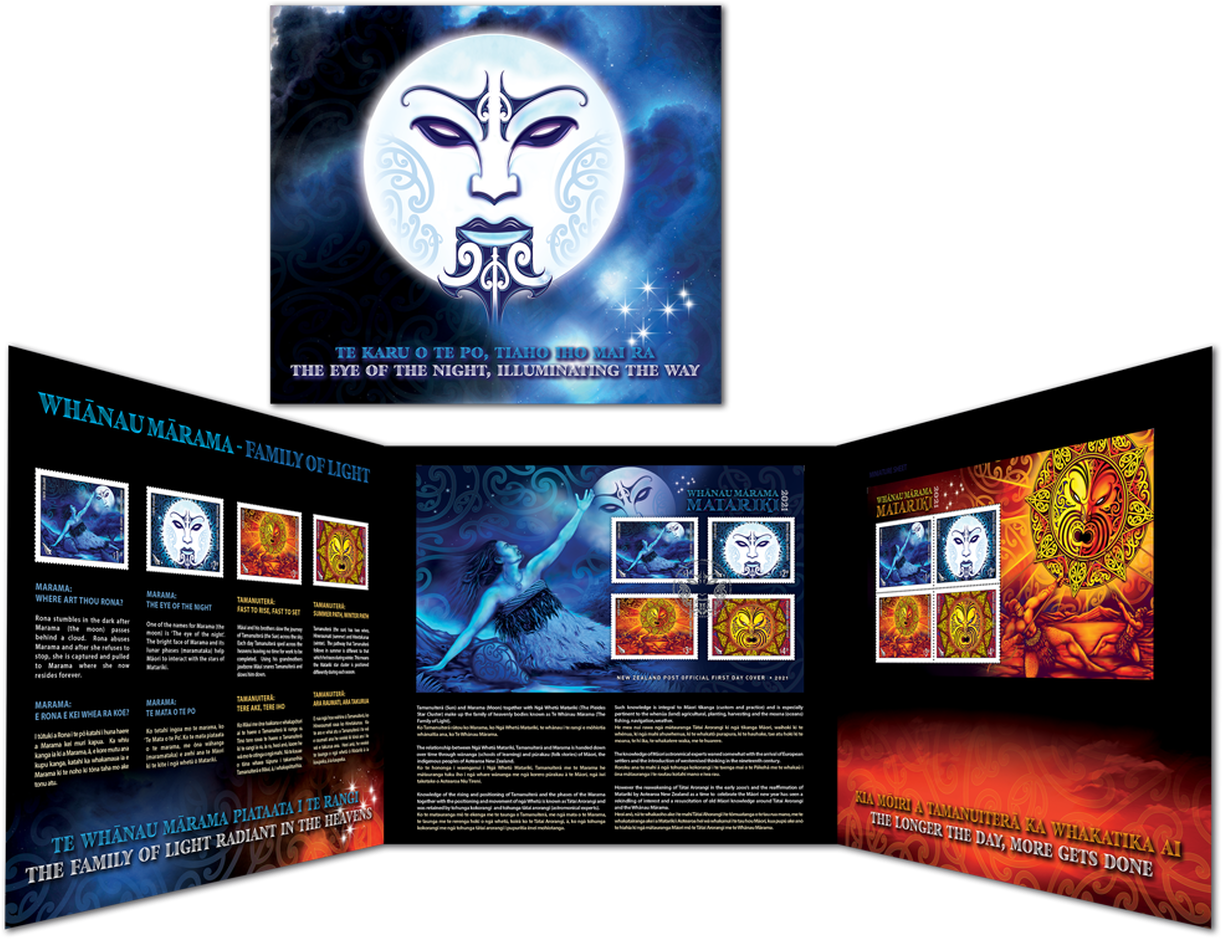 Tamanuiterā (the Sun) and Marama (the Moon) together with Ngā Whetū Matariki (the Pleiades Star Cluster) make up the family of heavenly bodies known as Te Whānau Mārama (the Family of Light).

This stamp issue celebrates Matariki, the Māori New Year, in 2021 with stories of the Sun and the Moon.

$1.50 Marama: Where art thou, Rona? -After abusing Marama for hiding behind a cloud, Marama captured and pulled Rona her to her, where she now resides forever.

$2.80 Marama: The eye of the night -The bright face of Marama and her lunar phases (maramataka) help Māori to interact with the stars of Matariki.

$3.60 Tamanuiterā: Fast to rise, fast to set -Using his grandmother’s jawbone, Māui and his brothers slow the journey of Tamanuiterā across the sky to make the day longer.

$4.10 ‘Tamanuiterā: Summer path, winter path -Tamanuiterā has two wives, Hineraumati (summer) and Hinetakurua (winter). The Matariki star cluster is positioned differently during each of the seasons. 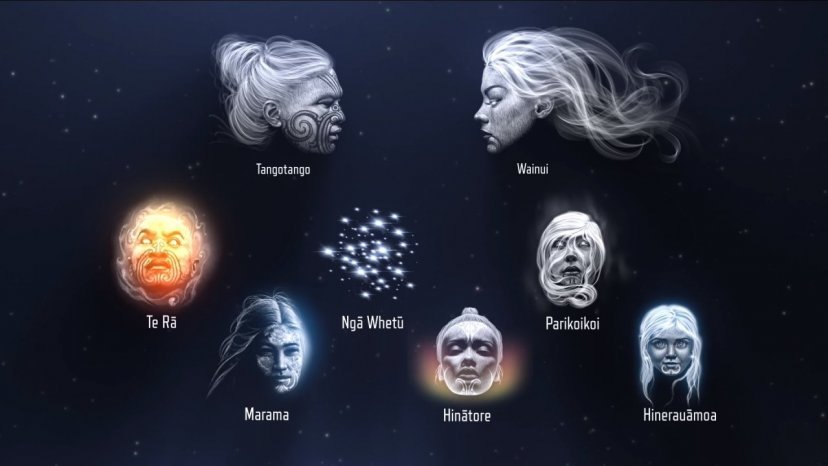 Placed in the sky by the god Tāne, they’ve guided Māori across the Pacific Ocean and played a pivotal role in Māori agricultural, fishing, hunting, building – foretelling aspects of the coming seasons and weather conditions – and in ceremony, language and culture.

In the Māori language, Matariki is both the name of the Pleiades star cluster and also of the season of its first rising in late June or early July. This is a marker of the beginning of the new year. Different people celebrate Matariki at different times; some when Matariki rises in late June or early July while others observe it at the first full moon or first new moon following the rising of Matariki.

Matariki is a shortened version of Ngā mata o te ariki o Tāwhirimātea, or ‘the eyes of the god Tāwhirimātea’, but it is sometimes incorrectly translated as ‘little eyes’. Similar words do occur in most Polynesian languages, deriving from Proto-Polynesian *mataliki, meaning ‘minute, small’; the use of the term for the Pleiades cluster is also ancient and has been reconstructed to Eastern Oceanic.

According to Māori mythology, the star cluster was believed to emerge from Tāwhirimātea who had gouged his eyes out of rage from the separation of his parents Ranginui and Papatūānuku.

The cluster was important for navigation and timing the seasons. The first rising of the Pleiades and of Rigel (Puanga in northern Māori, Puaka in southern Māori) occurs just prior to sunrise in late June or early July. The actual time for the celebration of Matariki varies, some iwi (tribe or clan) celebrate it immediately, others wait until the rising of the next full moon, or the dawn of the next new moon—and others use the rising of Puanga/Puaka (Rigel) in a similar way.

In traditional times, Matariki was a season to celebrate and to prepare the ground for the coming year.[9] Offerings of the produce of the land were made to the gods, including Rongo, god of cultivated food. This time of the year was also a good time to instruct young people in the lore of the land and the forest. In addition, certain birds and fish were especially easy to harvest at this time.

In 2001, the Māori Language Commission began a move to “reclaim Matariki, or Aotearoa Pacific New Year, as an important focus for Māori language regeneration”. Since then it has increasingly become common practice for various institutions to celebrate Matariki in a range of ways and over the period of a week or month anywhere from early June to late August.

With the wider recognition, proposals were made to make Matariki an official public holiday in New Zealand—in particular, former Māori Party MP Rahui Katene’s member’s bill Te Ra o Matariki Bill/Matariki Day Bill, drawn from the ballot in June 2009. The Bill would have fixed the date of a public holiday using the new moon in June; however, this was later changed to the new moon of the heliacal rising of Matariki when the bill was drawn a month later and set down for introduction into Parliament. Mayor of Waitakere City Bob Harvey supported the call to make Matariki a public holiday to replace Queen’s Birthday, along with the Republican Movement of Aotearoa New Zealand, which found none of New Zealand’s local authorities held celebrations for Queen’s Birthday, but many held celebrations for Matariki. However, the Bill itself did not propose abolishing Queen’s Birthday, and was voted down at its first reading.

As part of the National–Māori Party agreement subsequent to the 2011 New Zealand general election, both parties agreed to support a “cultural heritage bill to recognise Matariki/Puanga, and to honour the peace-making heritage established at Parihaka.”