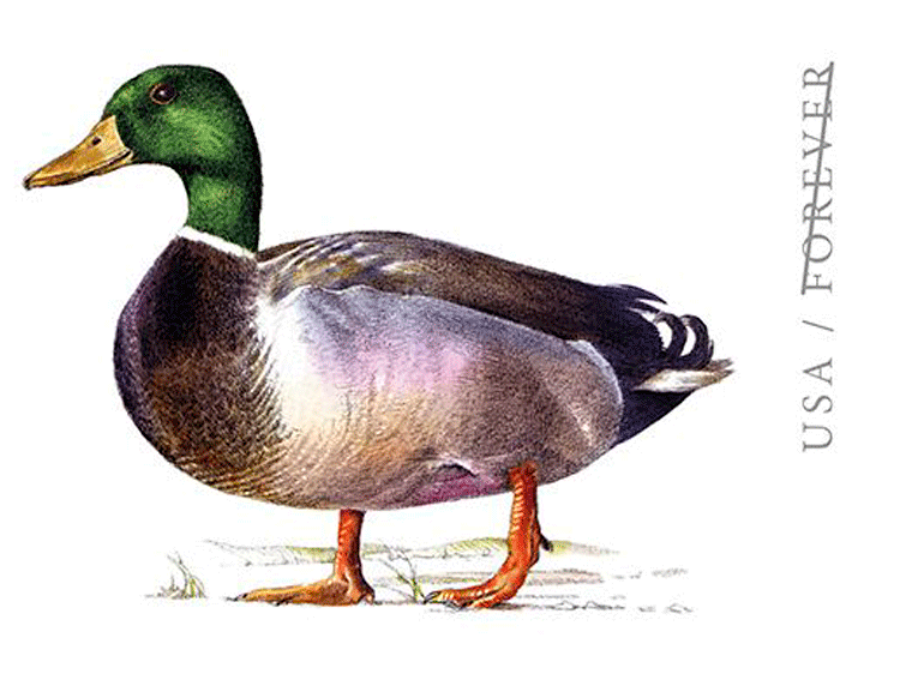 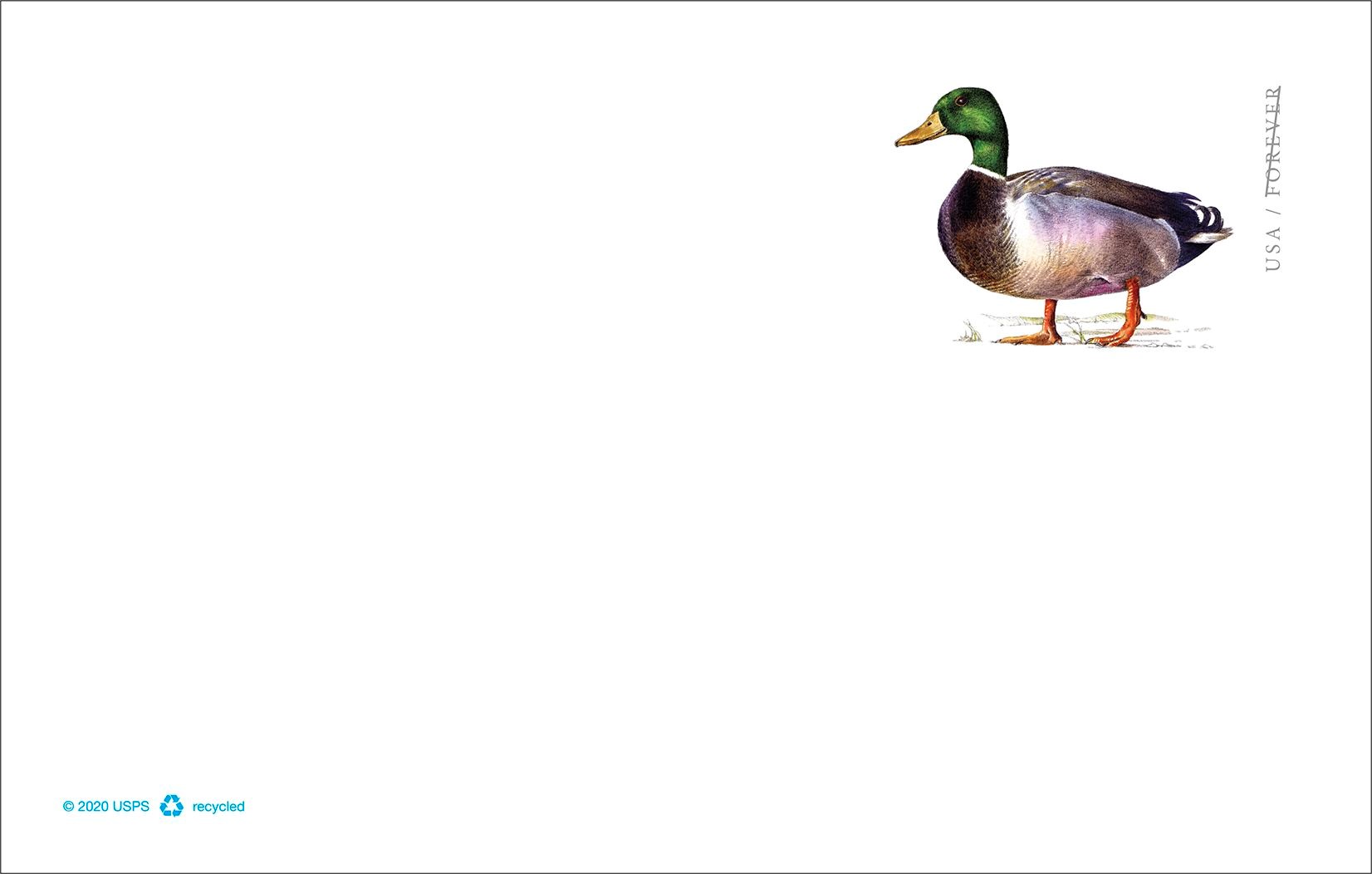 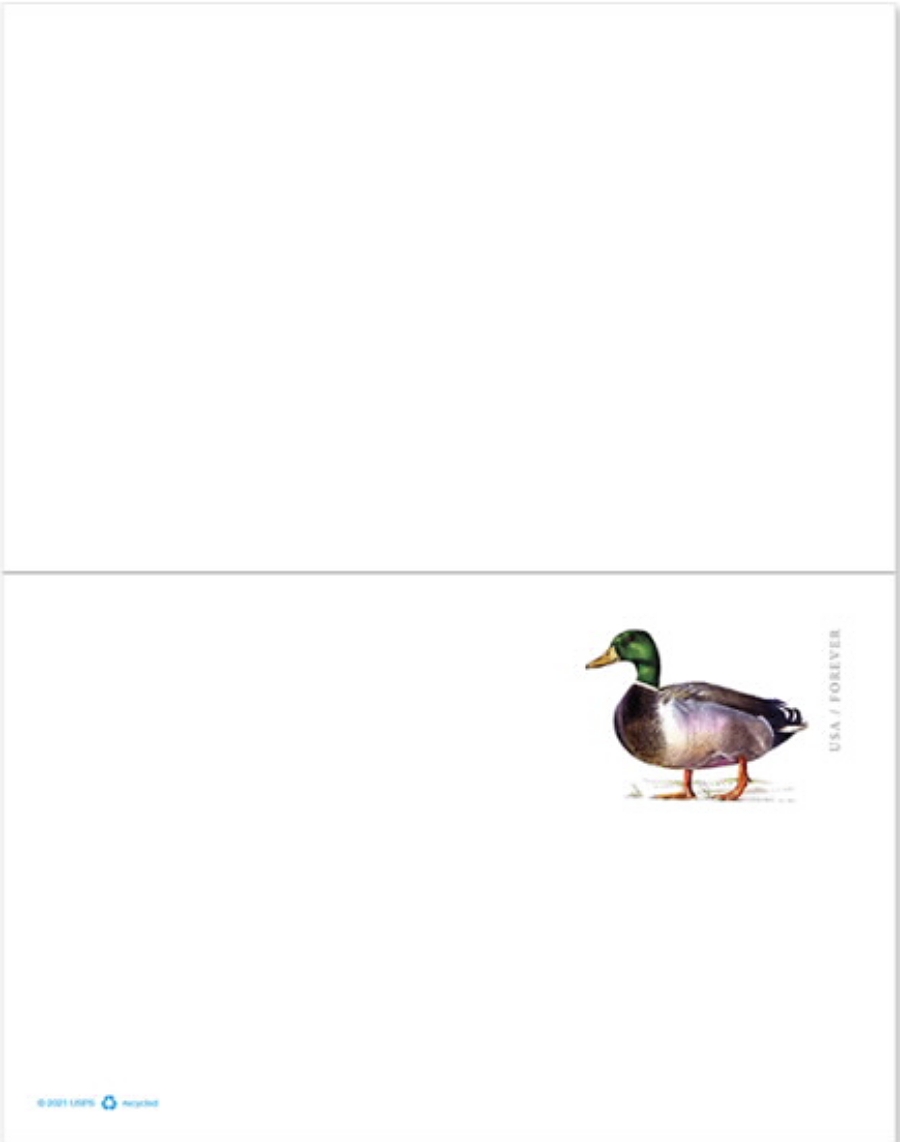 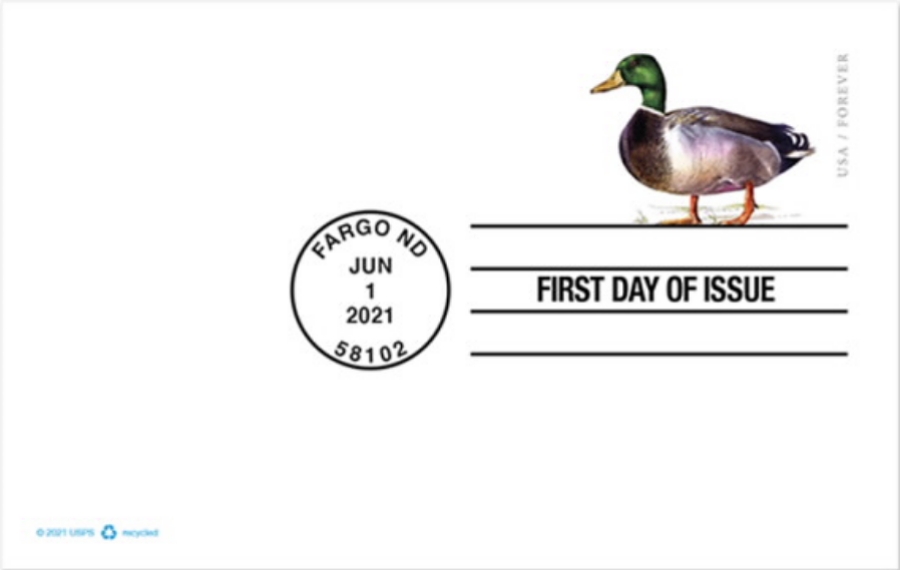 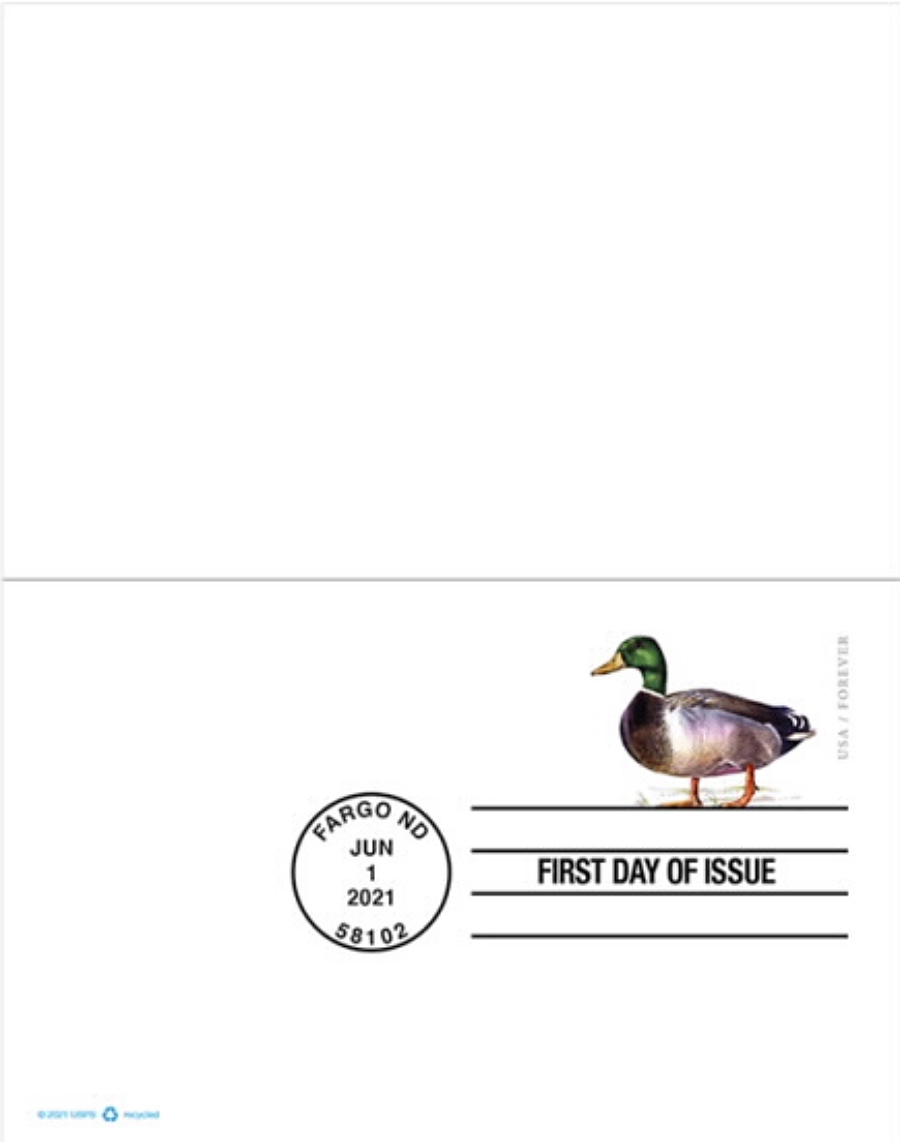 On June 1, 2021, in Fargo, ND, the United States Postal Service® will issue the Mallard Forever® stamped card priced at 40 cents (36-cent postage plus 4-cent surcharge) in one design. These stamped cards will go on sale nationwide June 1, 2021, and must not be sold or canceled before the first-day-of-issue.

The Postal Service™ issues a new stamped card for 2021 featuring an illustration of a mallard drake (Anas platyrhynchos) from pre-existing artwork by famed illustrator and designer Dugald Stermer (1936–2011). The full-body, left-facing profile was created in pencil and watercolor. Art director Ethel Kessler designed the stamped card.

The Mallard stamped card will be available in the following formats:

How to Order the First-Day-of-Issue Postmark:
Customers have 120 days to obtain the first-day-of-issue postmark by mail. They may purchase new stamps at their local Post Office™ or at The Postal Store® website at usps.com/shop. They must affix the stamps to envelopes of their choice, address the envelopes (to themselves or others), and place them in a larger envelope addressed to:

After applying the first-day-of-issue postmark, the Postal Service will return the envelopes through the mail. There is no charge for the postmark up to a quantity of 50. There is a 5-cent charge for each additional postmark over 50. All orders must be postmarked by October 1, 2021. 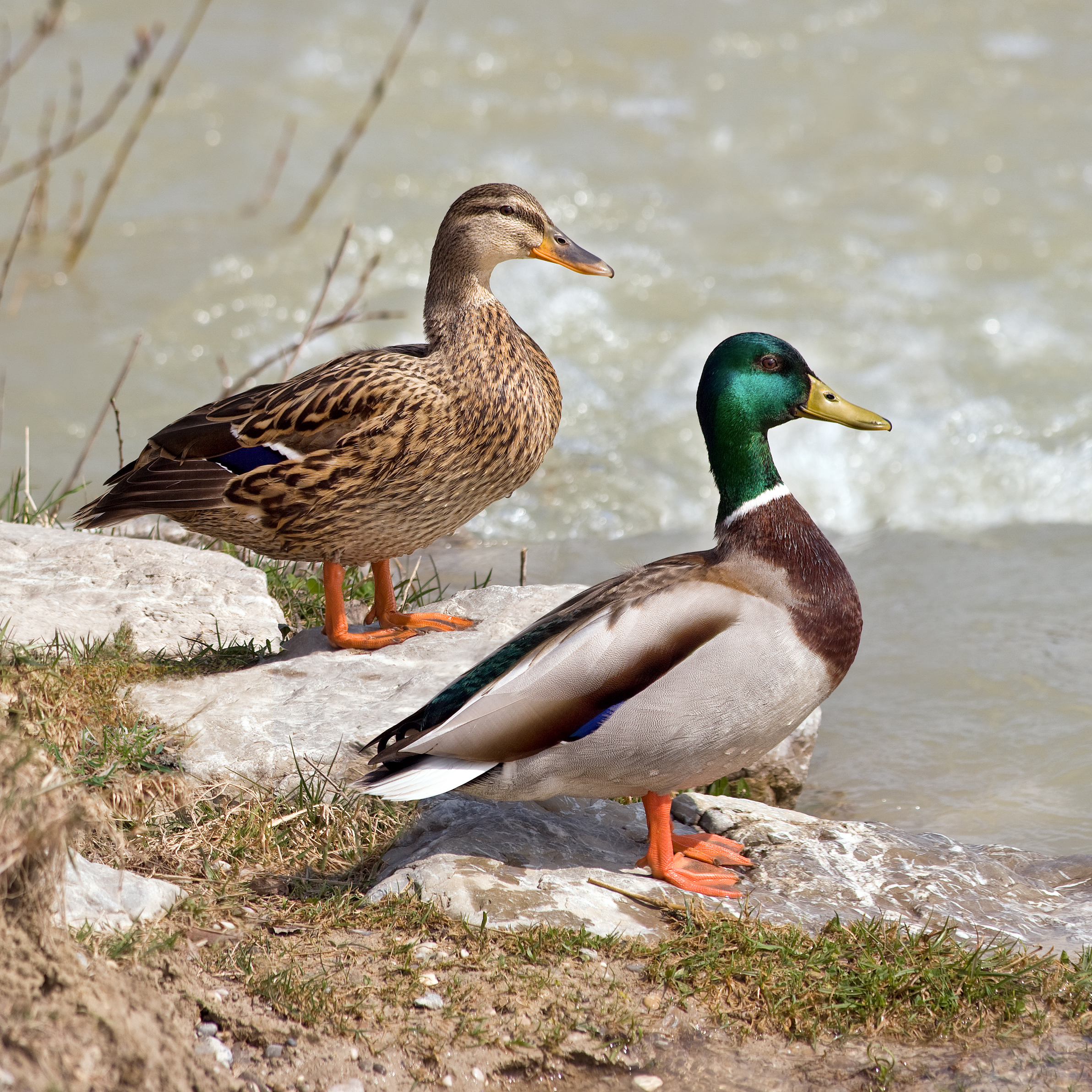 The mallard or wild duck (Anas platyrhynchos) is a dabbling duck that breeds throughout the temperate and subtropical Americas, Eurasia, and North Africa, and has been introduced to New Zealand, Australia, Peru, Brazil, Uruguay, Argentina, Chile, Colombia, the Falkland Islands, and South Africa. This duck belongs to the subfamily Anatinae of the waterfowl family Anatidae. The male birds (drakes) have a glossy green head and are grey on their wings and belly, while the females (hens or ducks) have mainly brown-speckled plumage. Both sexes have an area of white-bordered black or iridescent blue feathers called a speculum on their wings; males especially tend to have blue speculum feathers. Mallards live in wetlands, eat water plants and small animals, and are social animals preferring to congregate in groups or flocks of varying sizes. This species is the main ancestor of most breeds of domestic ducks.

The female lays eight to 13 creamy white to greenish-buff spotless eggs, on alternate days. Incubation takes 27 to 28 days and fledging takes 50 to 60 days. The ducklings are precocial and fully capable of swimming as soon as they hatch.

The mallard is considered to be a species of least concern by the International Union for Conservation of Nature (IUCN). Unlike many waterfowl, mallards are considered an invasive species in some regions. It is a very adaptable species, being able to live and even thrive in urban areas which may have supported more localized, sensitive species of waterfowl before development. The non-migratory mallard interbreeds with indigenous wild ducks of closely related species through genetic pollution by producing fertile offspring. Complete hybridization of various species of wild duck gene pools could result in the extinction of many indigenous waterfowl. The wild mallard is the ancestor of most domestic ducks, and its naturally evolved wild gene pool gets genetically polluted by the domestic and feral mallard populations. 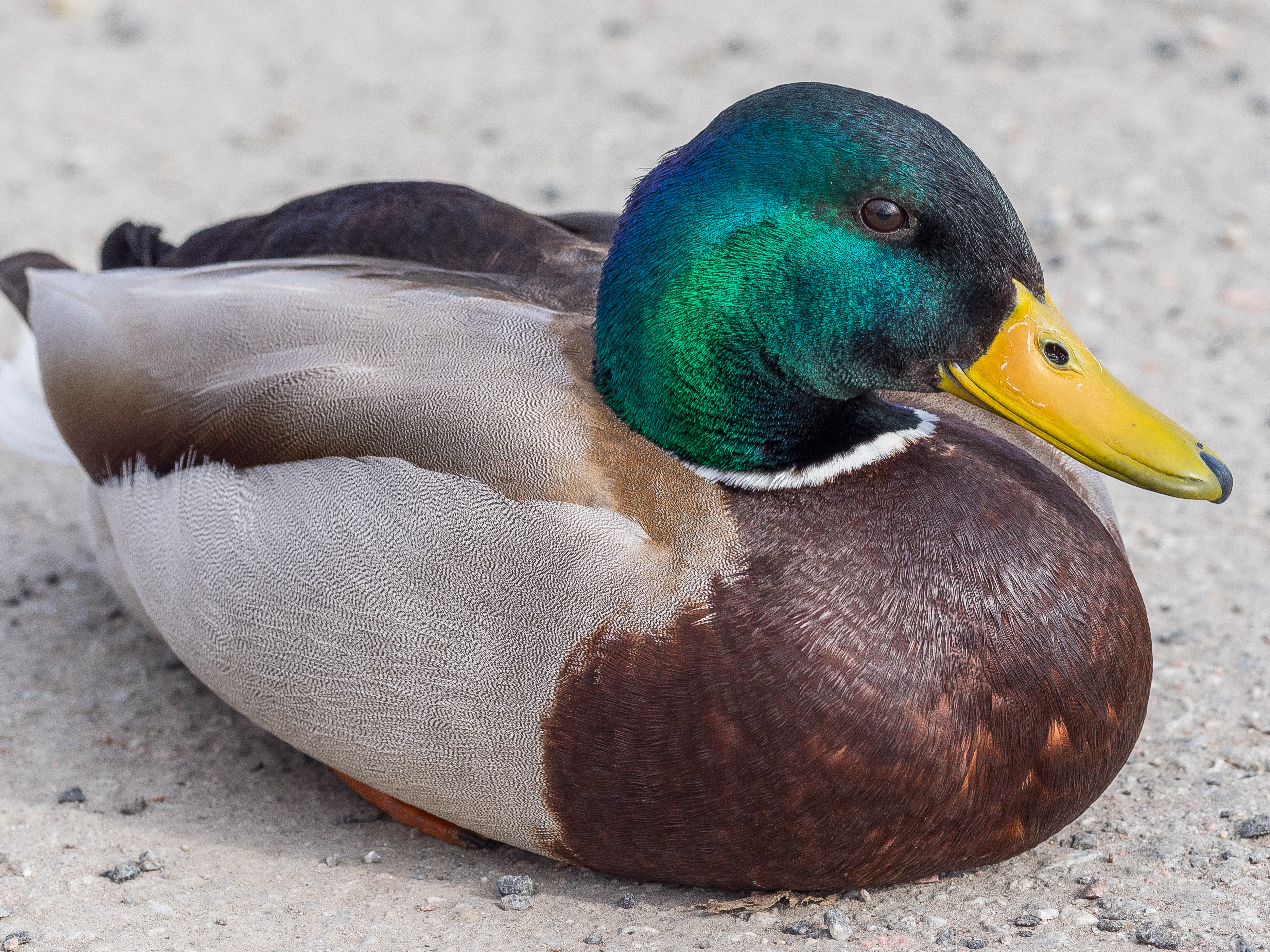 The breeding male mallard is unmistakable, with a glossy bottle-green head and a white collar that demarcates the head from the purple-tinged brown breast, grey-brown wings, and a pale grey belly. The rear of the male is black, with white-bordered dark tail feathers. The bill of the male is a yellowish-orange tipped with black, with that of the female generally darker and ranging from black to mottled orange and brown. The female mallard is predominantly mottled, with each individual feather showing sharp contrast from buff to very dark brown, a coloration shared by most female dabbling ducks, and has buff cheeks, eyebrow, throat, and neck, with a darker crown and eye-stripe.

Both male and female mallards have distinct iridescent purple-blue speculum feathers edged with white, which are prominent in flight or at rest but temporarily shed during the annual summer moult. Upon hatching, the plumage of the duckling is yellow on the underside and face (with streaks by the eyes) and black on the back (with some yellow spots) all the way to the top and back of the head. Its legs and bill are also black. As it nears a month in age, the duckling’s plumage starts becoming drab, looking more like the female, though more streaked, and its legs lose their dark grey coloring.

Two months after hatching, the fledgling period has ended, and the duckling is now a juvenile. Between three and four months of age, the juvenile can finally begin flying, as its wings are fully developed for flight (which can be confirmed by the sight of purple speculum feathers). Its bill soon loses its dark grey coloring, and its sex can finally be distinguished visually by three factors: 1) the bill is yellow in males, but black and orange in females; 2) the breast feathers are reddish-brown in males, but brown in females; and 3) in males, the center tail feather (drake feather) is curled, but in females, the center tail feather is straight. During the final period of maturity leading up to adulthood (6–10 months of age), the plumage of female juveniles remains the same while the plumage of male juveniles gradually changes to its characteristic colors. This change in plumage also applies to adult mallard males when they transition in and out of their non-breeding eclipse plumage at the beginning and the end of the summer moulting period. The adulthood age for mallards is fourteen months, and the average life expectancy is three years, but they can live to twenty. 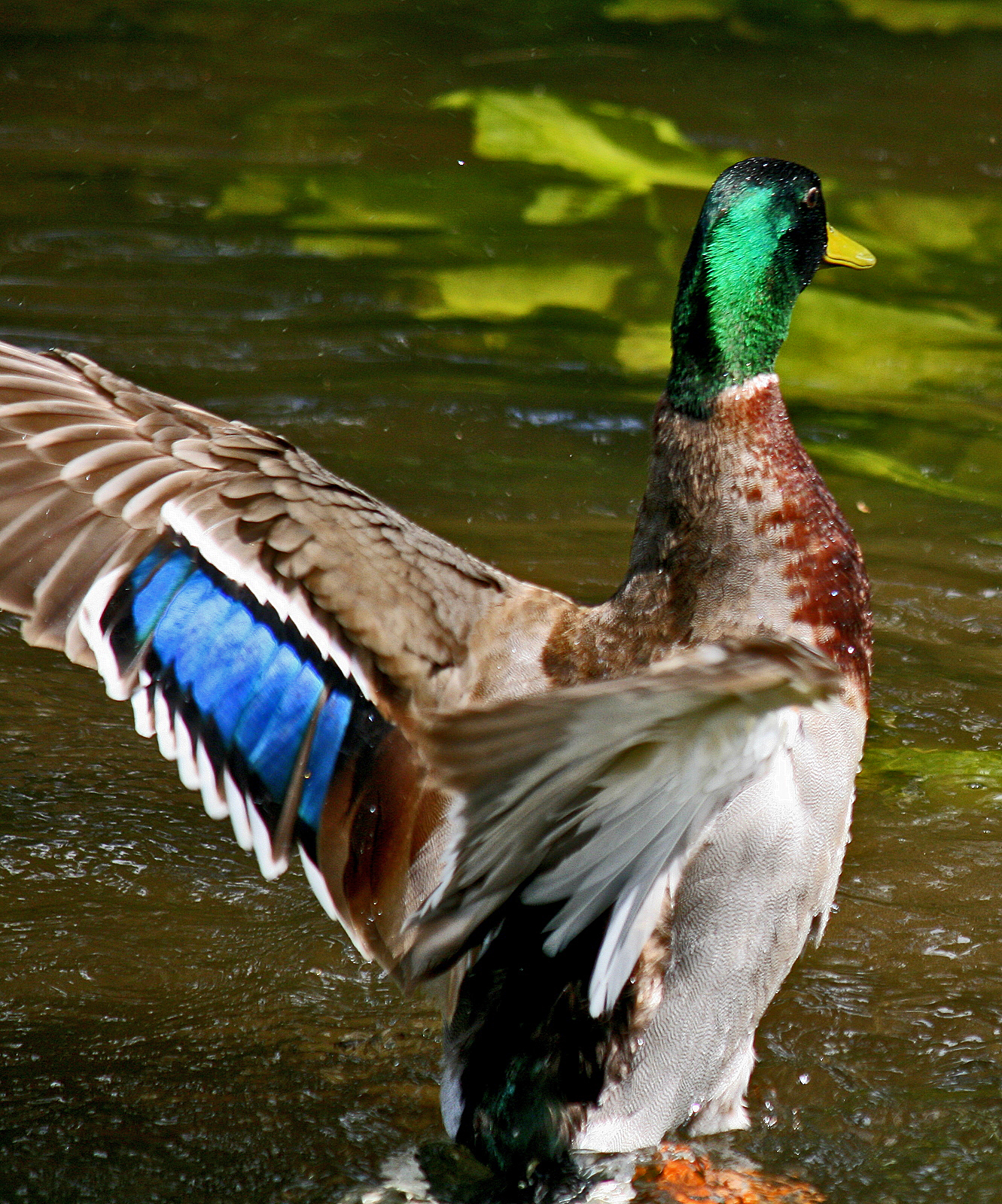 Several species of duck have brown-plumaged females that can be confused with the female mallard. The female gadwall (Mareca strepera) has an orange-lined bill, white belly, black and white speculum that is seen as a white square on the wings in flight, and is a smaller bird. More similar to the female mallard in North America are the American black duck (A. rubripes), which is notably darker-hued in both sexes than the mallard, and the mottled duck (A. fulvigula), which is somewhat darker than the female mallard, and with slightly different bare-part coloration and no white edge on the speculum.

In captivity, domestic ducks come in wild-type plumages, white, and other colors. Most of these color variants are also known in domestic mallards not bred as livestock, but kept as pets, aviary birds, etc., where they are rare but increasing in availability.

A noisy species, the female has the deep quack stereotypically associated with ducks. Male mallards make a sound phonetically similar to that of the female, a typical quack, but it is deeper and quieter compared to that of the female. When incubating a nest, or when offspring are present, females vocalize differently, making a call that sounds like a truncated version of the usual quack. This maternal vocalization is highly attractive to their young. The repetition and frequency modulation of these quacks form the auditory basis for species identification in offspring, a process known as acoustic conspecific identification. In addition, females hiss if the nest or offspring are threatened or interfered with. When taking off, the wings of a mallard produce a characteristic faint whistling noise. 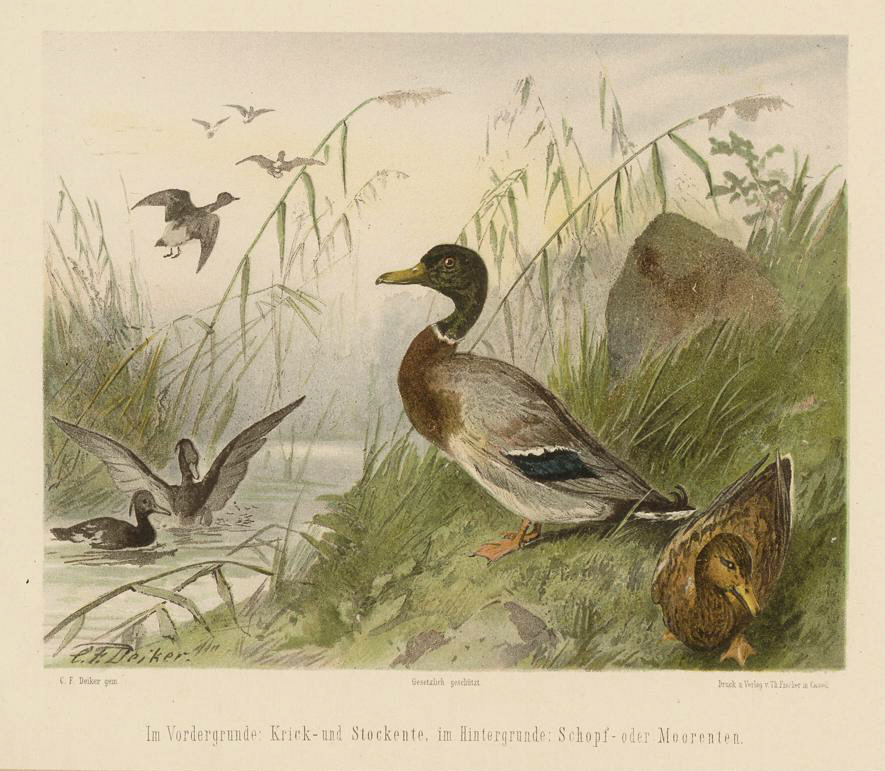 The mallard is a rare example of both Allen’s Rule and Bergmann’s Rule in birds. Bergmann’s Rule, which states that polar forms tend to be larger than related ones from warmer climates, has numerous examples in birds, as in case of the Greenland mallard which is larger than the mallards further south. Allen’s Rule says that appendages like ears tend to be smaller in polar forms to minimize heat loss, and larger in tropical and desert equivalents to facilitate heat diffusion, and that the polar taxa are stockier overall. Examples of this rule in birds are rare as they lack external ears, but the bill of ducks is supplied with a few blood vessels to prevent heat loss, and, as in the Greenland mallard, the bill is smaller than that of birds farther south, illustrating the rule.

Due to the variability of the mallard’s genetic code, which gives it its vast interbreeding capability, mutations in the genes that decide plumage colour are very common and have resulted in a wide variety of hybrids, such as Brewer’s duck (Mareca strepera). 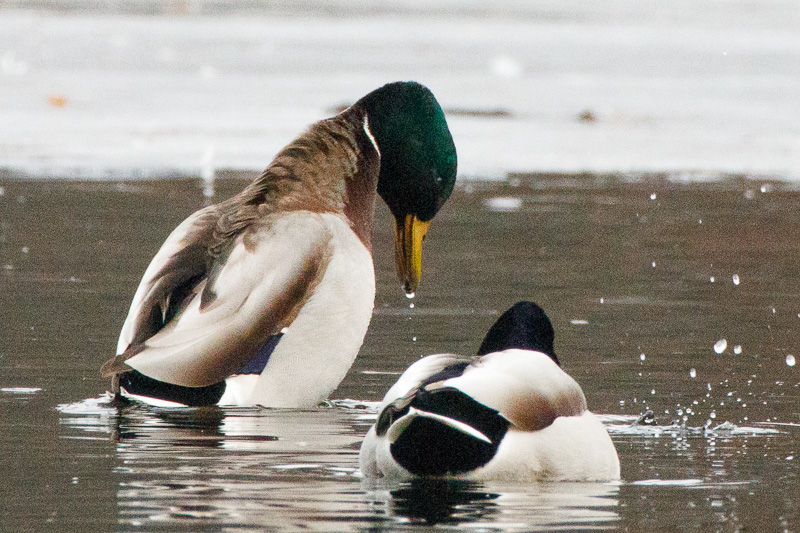 WASHINGTON, DC — A mallard duck is featured on the newest U.S. Postal Service stamped card, available today. The card features a drake in his breeding plumage.

The stamp art shows the mallard (Anas platyrhynchos) in pre-existing artwork by famed illustrator and designer Dugald Stermer. He drew this realistic full-body, left-facing profile in pencil, coloring it with a watercolor wash.

The card is being issued as a Forever stamped card. Its postage will always be equal to the value of the stamped postcard rate in effect at the time of use, even if the price increases after purchase.

One of the world’s most recognizable birds, the mallard ranges widely throughout the Northern Hemisphere. Millions spend their summers in the Great Plains, and each year as the weather cools, millions more migrate into the contiguous states from Alaska and Canada.

A drake competes with other males for the mating privileges of a mallard hen. To impress her, he makes a show of his breeding finery: iridescent green head, white neck ring, chestnut breast and curled black tail feathers. Although the drake is generally flashier, wings of both drakes and hens have bands of blue surrounded by narrower stripes of black and white, markings also useful in courtship displays.

While the hen is busy tending her nest and eggs, the drake departs and joins other drakes at a marsh. No longer needing breeding plumage in the summer and early autumn, they molt and don mottled brown feathers, much like those of the hens. This camouflage plumage protects drakes from predators during the three or four weeks they are unable to fly because they are growing new wing feathers.

Mallards are dabbling ducks; they tip, tail-up, in shallow water to feed mostly on vegetation, but also on insects and small crustaceans beneath the surface. The ducklings can feed themselves soon after hatching. On land, mallards often feed on grain left in farm fields. The average adult mallard weighs almost 3 pounds.

The distinctive, loud, raspy quack commonly associated with ducks is actually the call of the mallard hen. The drake’s call is lower and softer. Many other wild ducks have calls that sound nothing like the classic quack. Except for the Muscovy duck, all domestic ducks are descended from the wild mallard.

Dugald Stermer revolutionized the look of publications with his work for Ramparts magazine in the 1960s. His style influenced the design and typography of Rolling Stone, New York and Mother Jones magazines, and he was sought after to illustrate covers and articles for many other publications. Stermer designed the medals for the 1984 Los Angeles Olympic Games and headed the illustrations department at the California College of the Arts. His illustrations of the natural world, rendered in the precise yet casual modern style he popularized, are collected in several books.

Customers may purchase stamps and other philatelic products through the Postal Store at usps.com/shopstamps, by calling 844-737-7826, by mail through  USA Philatelic, or at Post Office locations nationwide.

The Postal Service generally receives no tax dollars for operating expenses and relies on the sale of postage, products and services to fund its operations.