International Year of the Elimination of Child Labour 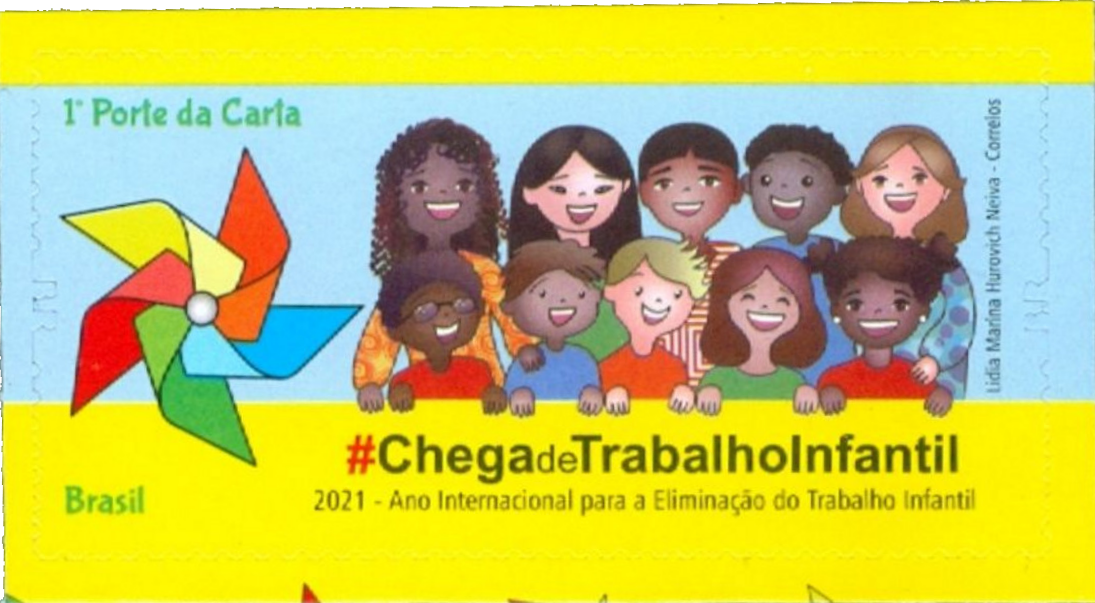 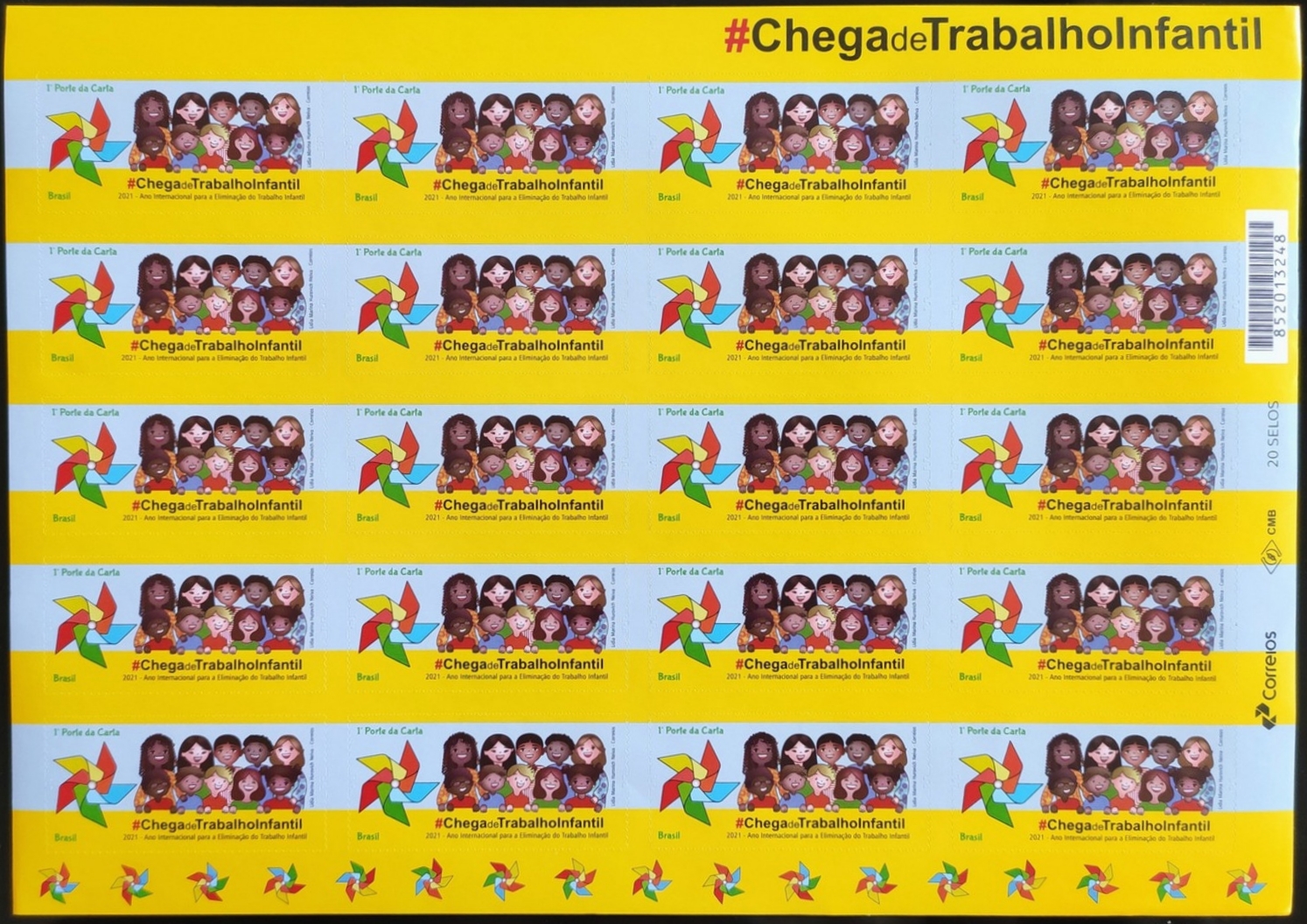 The stamps have a drawing of several children together, representing diversity. Just below is the hashtag of the campaign #ChegadeTrabalhoInfantil. The left part of the seals has the design of a colorful 5-pointed catavento, a world symbol of the fight against child labor. Vector illustration and computer graphics techniques were used.

CHILD LABOUR IS WORK THAT DEPRIVES CHILDREN OF THEIR CHILDHOOD, THEIR POTENTIAL, AND THEIR DIGNITY.
It harms children mentally, physically, socially, and morally. It interferes with their schooling, preventing them from attending or concentrating. It may involve them being enslaved, separated from their families, and exposed to serious hazards and illnesses.

Almost half of child labour happens in Africa (72 million children), followed by Asia and the Pacific (62 million).
70% of children in child labour work in agriculture, mainly in subsistence and commercial farming and herding livestock. 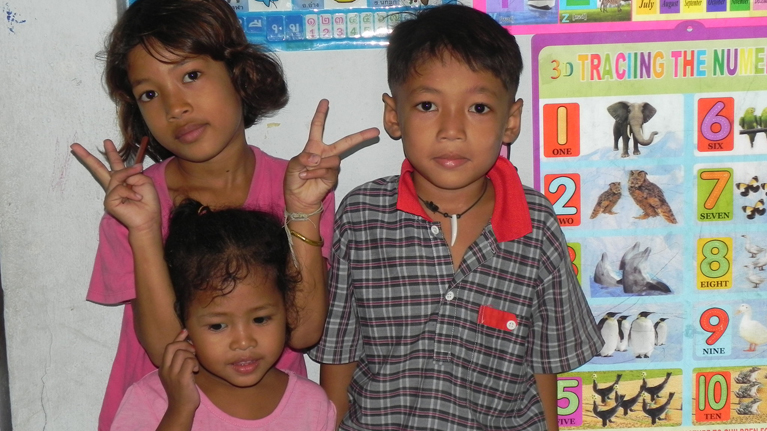 GENEVA (ILO News) – The United Nations General Assembly (UNGA) has unanimously adopted a resolution declaring 2021 as the International Year for the Elimination of Child Labour , and has asked the International Labour Organization to take the lead in its implementation.

The resolution highlights the member States’ commitments “to take immediate and effective measures to eradicate forced labour, end modern slavery and human trafficking and secure the prohibition and elimination of the worst forms of child labour, including recruitment and use of child soldiers, and by 2025 end child labour in all its forms.”

Argentina took a lead role in advocating for this global commitment, as a follow up to the IV Global Conference on the Sustained Eradication of Child Labour , which took place in Buenos Aires in November 2017. Seventy-eight countries co-sponsored the resolution.

“We hope that this will be one more step to redouble our efforts and our progress to advance, day by day, towards a world in which no child is subjected to child labour or exploitation and a world where decent work for all will be a reality,” said Martin Garcia Moritán, Argentina’s representative to the UN.

The ILO has been working for the abolition of child labour throughout its 100 year-history, and one of the first Conventions it adopted was on Minimum Age in Industry (No. 5, 1919) .

The organization is a partner in Alliance 8.7 and serves as the secretariat of this global partnership for eradicating forced labour, modern slavery, human trafficking and child labour around the world.

Substantial progress has been achieved in recent years, largely because of intense advocacy and national mobilization backed by legislative and practical action. Between 2000 and 2016 alone, there was a 38 per cent decrease in child labour globally.

“The struggle against child labour has gained extraordinary momentum over the past two decades,” said Beate Andrees, Chief of the ILO’s Fundamentals Principles and Rights at Work Branch. “Yet, 152 million children across the world are still in child labour. We obviously need to scale up action further, and the decision by the General Assembly to declare 2021 the International Year for the Elimination of Child Labour will be a great help in focusing attention on the millions of girls and boys still toiling in the fields, in the mines and in factories.” 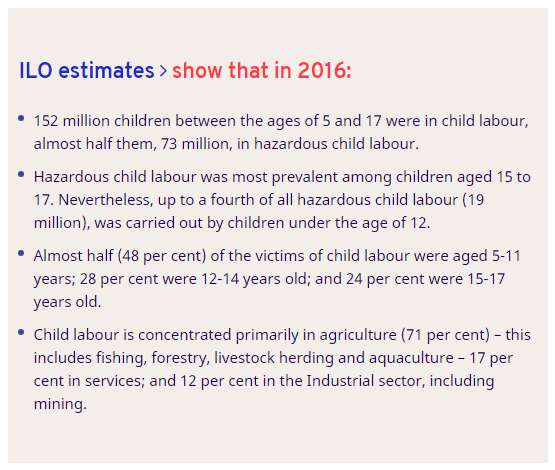 Child labour laws are statutes placing restrictions and regulations on the work of minors.

Child labour increased during the Industrial Revolution due to the children’s abilities to access smaller spaces and the ability to pay children less wages. In 1839 Prussia was the first country to pass laws restricting child labor in factories and setting the number of hours a child could work, although a child labour law was passed was in 1836 in the state of Massachusetts. Almost the entirety of Europe had child labour laws in place by 1890.

The International Labour Organization (ILO) works to set global minimum standards of labour. The United Nations declared 2021 as the International Year for the Elimination of Child Labour.

Since its induction, the International Labour Organization currently has 23 conventions, or laws, within its constitution that regulate the labor of adults and children. These laws include the minimum age restriction, protection against forced labor, holiday/vacation time granted, conditions of the workforce, safety standards, protection against pregnant women, and night time working conditions. Within these conditions are stricter standards set for the safety of children. Most of the conventions and recommendations for child labour fall under Article 3, The Elimination of child labour and the protection of children and young persons.

The first convention listed is the Minimum Age Convention, 1973. This convention states that a person under 18 cannot work in a facility that may jeopardize their safety, health, or morals. This work includes mining, operation of heavy machinery, and heavy manual labor. Children ages 13–15 May perform light work as long as the work does not bring any harm or hinder their education. Children under 13 are restricted from working. The Worst Forms of Child Labor conventions mandates that persons under 18 cannot be used in work as slaves, prostitution, pornography, or drug trafficking. The Medical Examination conventions hold that a child under 18 cannot work in an industrialized or non-industrialized position without being deemed fit by medical professional. Person’s under the age of 18 are not permitted to work underground such as in a mine. Persons aged 18–21 are required to be supervised when working in an underground environment. Lastly, persons over the age of 14 but younger than 18 must have at least 12 hours off, 14 if currently engaged in school, and these hours must include the hours of 10 pm through 6 am. These conventions and recommendations are in place to provide children with a safe working environment and promote their education. Since its start in 1919, 186 countries have become members of ILO. As a member of the ILO, countries vow to keep the minimum conventions held in the ILO constitution.

One way to ensure that products bought were not produced by child labour or through unsafe labour practices is by purchasing items through the World Fair Trade Organization, WTFO. The WTFO set 10 core principles which includes that any products registered could not have been produced by forced child labour and if any child labour was provided it remained within the conventions of the ILO.

The ILO mission is to promote the rights of workers, encourage decent employment opportunities, enhance social protection and increase awareness of work-related issues. Since its inception in 1919, the ILO has promoted safe working environments. In 1973, the ILO drafted its first conventions. Since then it has had several modifications. Currently, the ILO contains 186 nations that have vowed to maintain the minimum labour requirements in these conventions. The ILO continues to push for global labour laws and restrictions on child labour.

The International Programme on the Elimination of Child Labour (IPEC) is an organization established in 1992 by the International Labour Organization. Where the ILO is centered on reform in all forms of labour, both adult and child, the IPEC primarily focuses on the elimination of all forms of child labour. The IPEC uses programs to remove children from working environments and places the children in an educational setting. The IPEC provides job training for the parents to enhance their economic position to reduce the reliance of income from the child. The IPEC currently has operations in 88 countries and is the largest operation in the world working to reduce child labour, it makes sure conditions are met and children are safe.

UNICEF, or the United Nation Children’s Fund, was founded in 1919 after World War I. UNICEF promotes the safety and well being of children and actively works to change harsh conditions that children live in. UNICEF promotes education for all children. UNICEF also works against to reduce and eliminate child labour and the exploitation of children. Currently UNICEF has programs in 190 countries and programs.

The International Initiative to End Child Labor (IIECL) is a not-for-profit organization based out of the United States that actively works around the world to end child labor. The IIECL uses education and training programs to enable children and adults to gain an education and promote adult based labor skills. The organization also monitors and evaluates public and private sector, non-government organizations, organizational research, and development institutions to eliminate child labor.