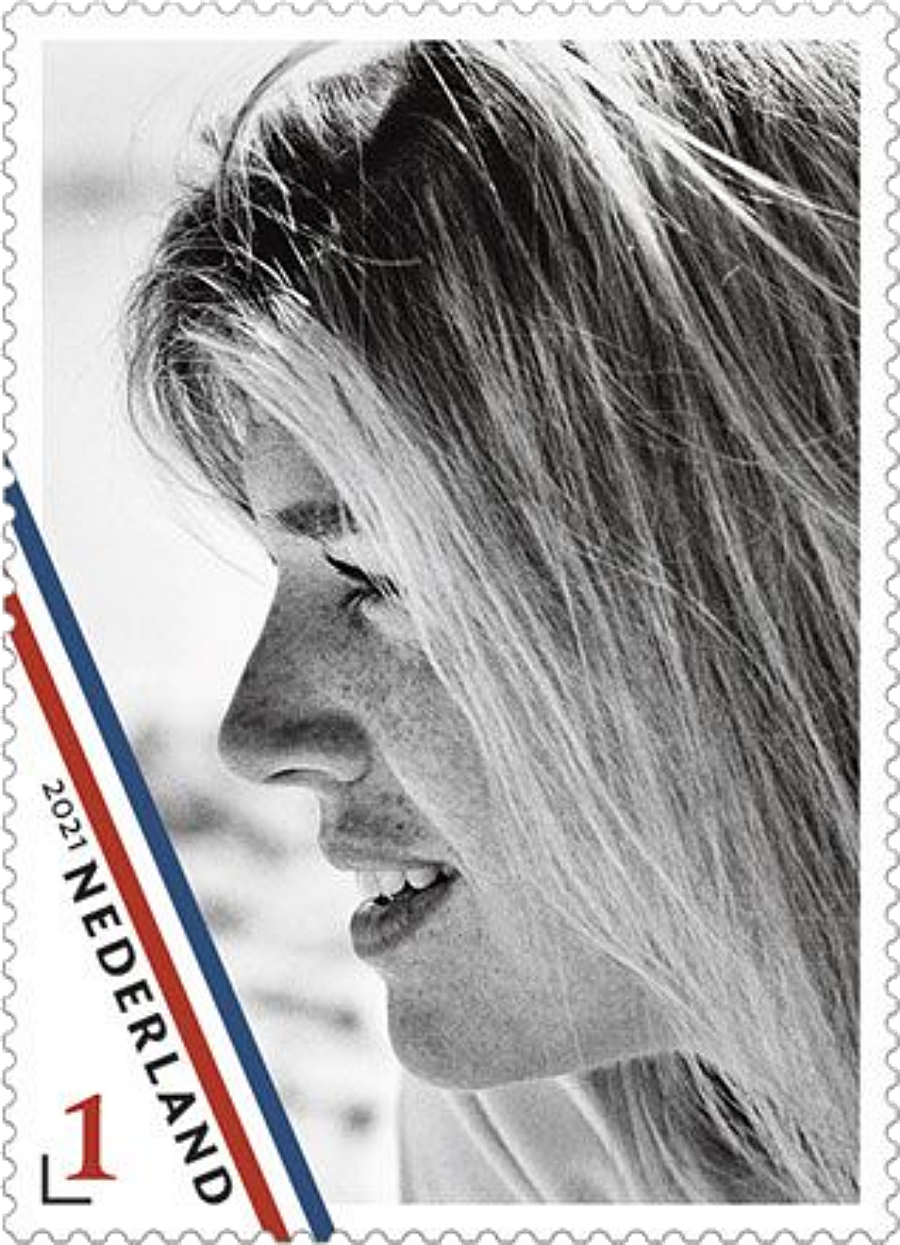 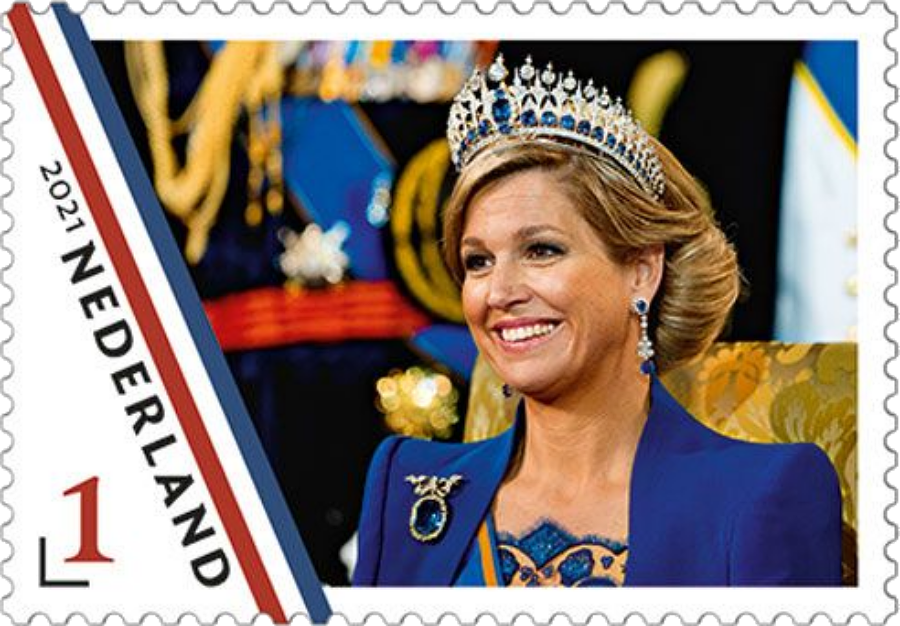 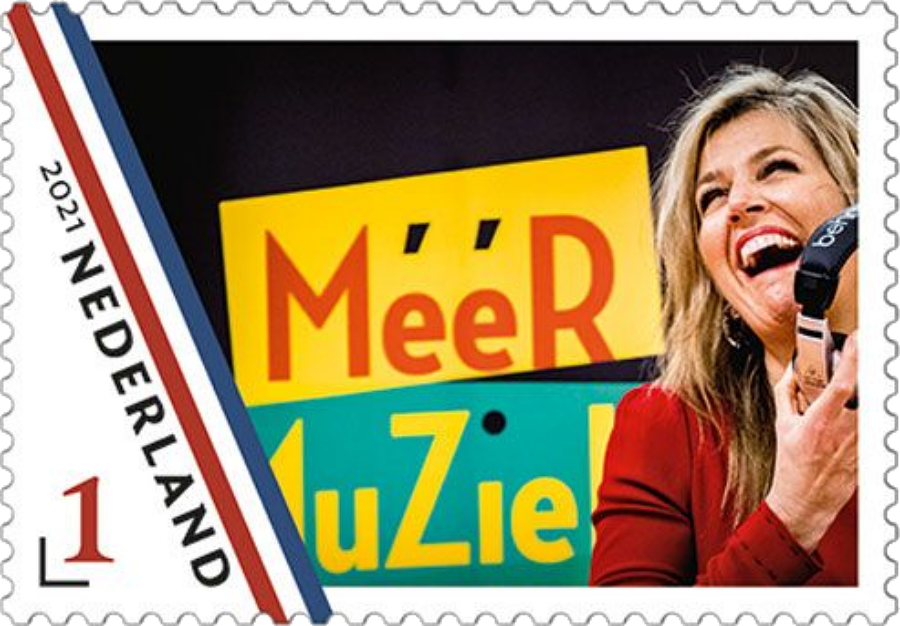 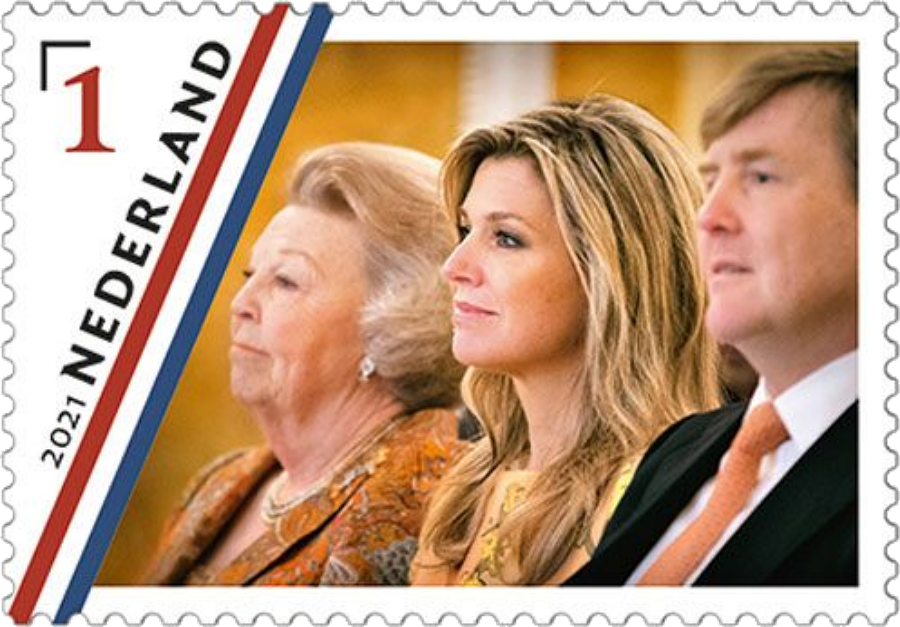 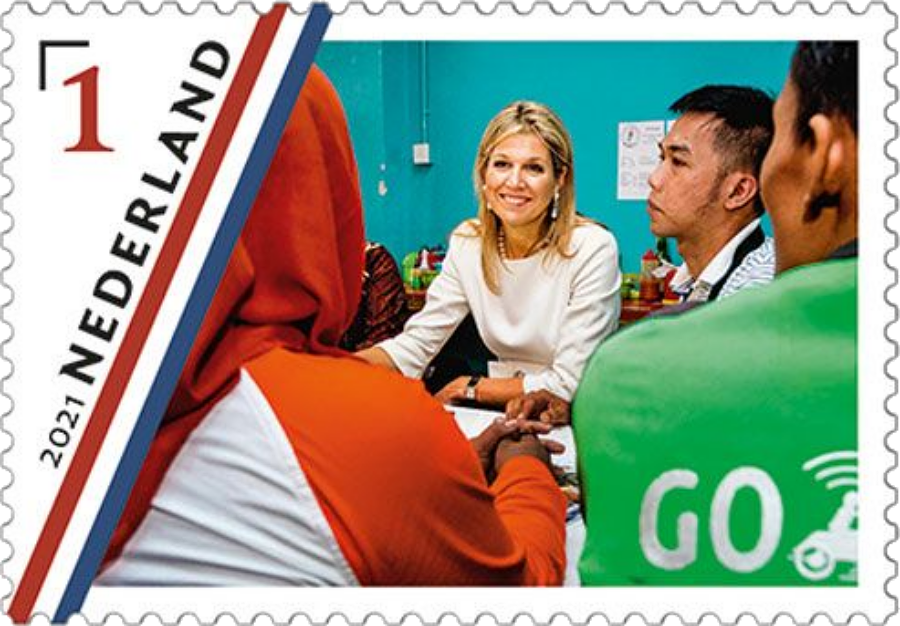 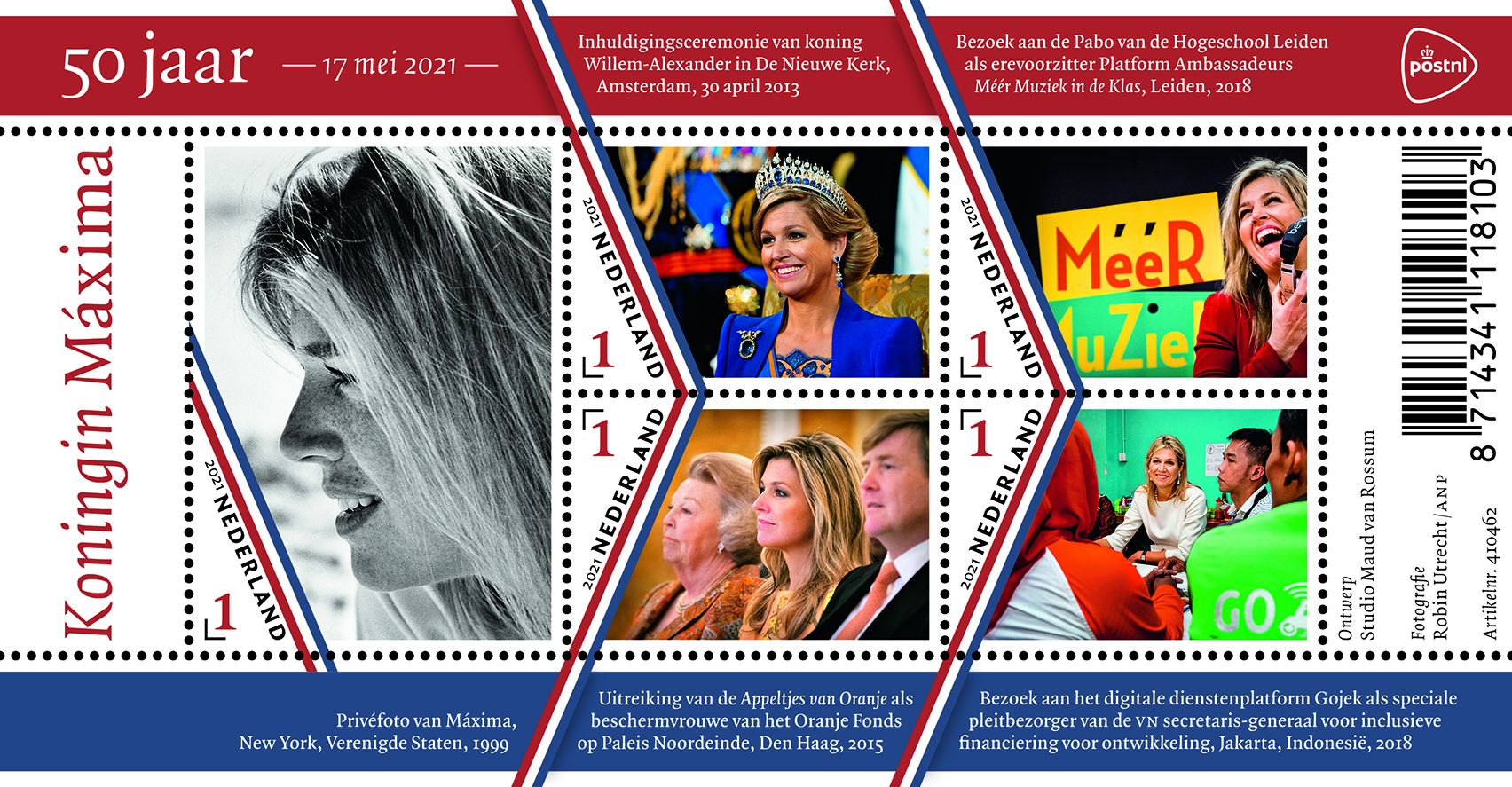 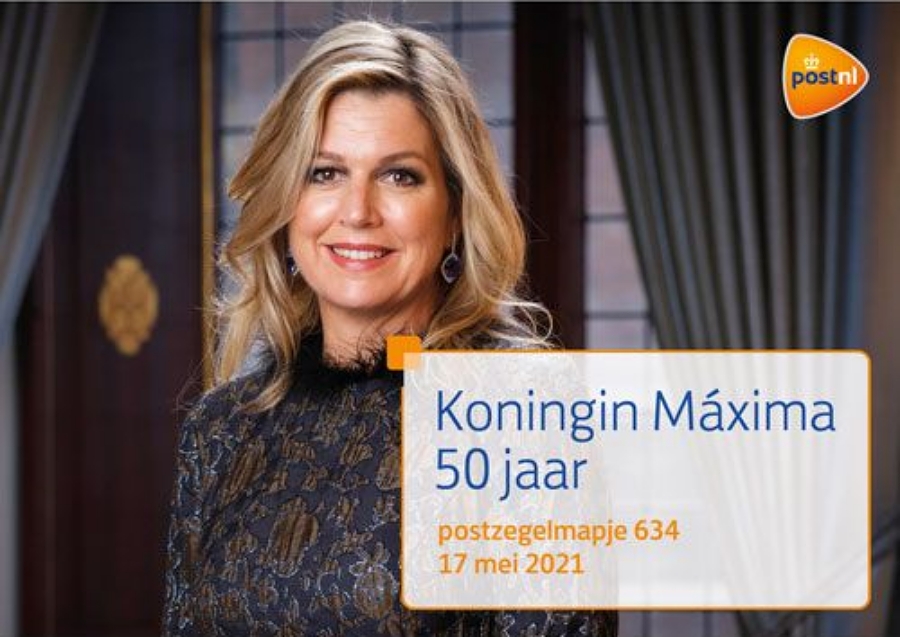 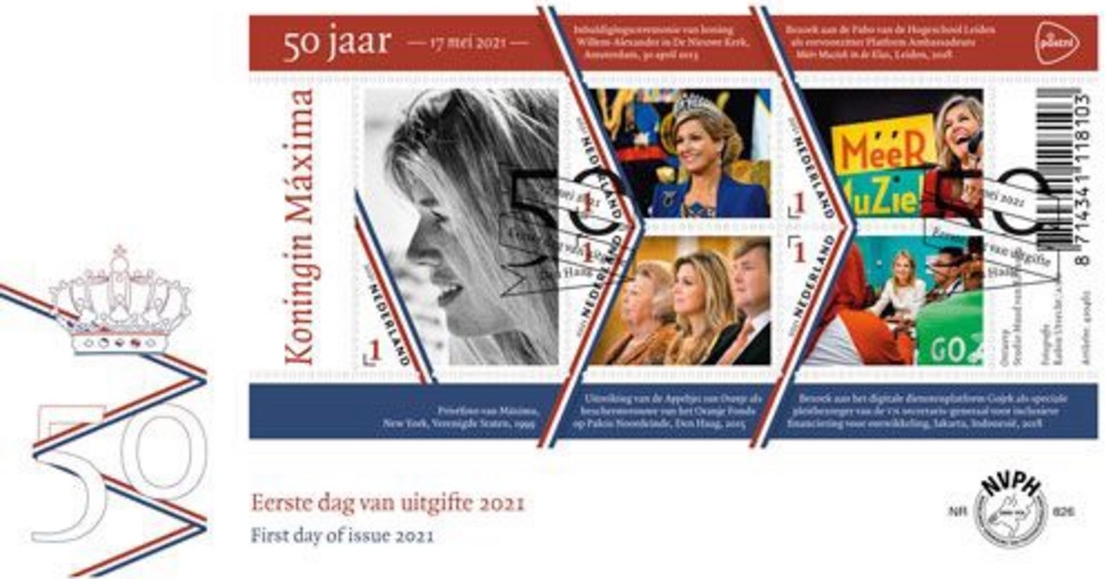 On the occasion of Queen Máxima’s birthday, PostNL will publish the stamp sheet Queen Máxima for 50 years on 17 May 2021. The design is by graphic designer Maud van Rossum. This special stamp issue also includes a large stamp with a private photo. The stamp on the left with a black and white portrait of Queen Máxima is 36 x 50 mm in size. On the 4 other stamps of 36 x 25 mm are color photos of her as queen, honorary president, patron and special advocate.

Máxima Zorreguieta Cerruti was born in Buenos Aires, Argentina, on 17 May 1971. She is the daughter of Jorge Zorreguieta (1928–2017), who served as Secretary of Agriculture under General Jorge Rafael Videla during Argentina’s last civil-military dictatorship (1976–1983), and his second wife, María del Carmen Cerruti Carricart (born 1944). She has two brothers, a sister (deceased), and three half-sisters by her father’s first wife, Marta López Gil. She is named after her paternal great-grandmother Máxima Bonorino González (1874–1965). Her father was a scion of the Zorreguieta family who had been landed gentry, professionals, regional politicians, and statesmen for generations. Her maternal great-grandfather was also from the landed gentry; Domingo Carricart Etchart (1885–1953) was a landowner, politician, Director of the Banco Provincial de Buenos Aires, first mayor of González Chaves, and mayor of Tres Arroyos.

She grew up in the Recoleta neighborhood of Buenos Aires city and studied at Northlands School, a bilingual school of the city of Olivos. She graduated with a degree in economics from the Pontifical Catholic University of Argentina (UCA) in 1995. This private university is governed by a directory of local bishops, including the current Pope Francis, then Archbishop of Buenos Aires and Grand Chancellor of UCA. During her student years, Francis presided over the traditional Mass at the beginning of classes. She later completed her studies with a master’s degree in the United States.

From 1989 to 1990, while still in college, she worked for Mercado Abierto Electrónico S.A. From 1992 to 1995, she worked in the sales department of Boston Securities SA in Buenos Aires, where she conducted research on software for financial markets. From July 1996 to February 1998, she worked for HSBC James Capel Inc. in New York City, where she became vice president of institutional sales for Latin America. From then until July 1999, she was vice president of the emerging markets division of Dresdner Kleinwort Benson in New York. From May 2000 to March 2001, she worked for Deutsche Bank in Brussels. She also worked as a teacher of English to children and adults, and of mathematics for high-school students and freshmen.

Máxima met Willem-Alexander in April 1999 in Seville, Spain, during the Seville Spring Fair. In an interview, they stated that he introduced himself only as “Alexander”, so that she did not know he was a prince. She thought he was joking when he later told her that he was not only a prince, but the Prince of Orange and heir apparent to the Dutch throne. They agreed to meet again two weeks later in New York, where Máxima was working for Dresdner Kleinwort Benson. Their relationship apparently began in New York, but she did not meet his parents, Queen Beatrix and Prince Claus, for some time.

The news of the couple’s relationship and eventual marriage plans caused controversy in the Netherlands, due to the involvement of Máxima’s father Jorge Zorreguieta as a cabinet minister during the National Reorganization Process, the most recent Argentinian dictatorship. Her father’s tenure as a minister took place during the beginning stages of the Dirty War (1974–82), a period of repression that saw about 30,000 people killed or disappeared during the seven-year military regime. At the request of the States General, Michiel Baud, a Dutch professor in Latin American studies, carried out an inquiry into the involvement of Zorreguieta in the Dirty War. Zorreguieta claimed that, as a civilian, he was unaware of the Dirty War while he was a cabinet minister. Baud determined that Máxima’s father had not been directly involved in any of the numerous atrocities that took place during that period. However, Baud also concluded that Zorreguieta was almost certainly aware of them; in Baud’s view, it was highly unlikely that a cabinet minister would not have known about them. Even so, his possible presence at the royal wedding was debated for several months.

The couple announced their engagement on 30 March 2001; Máxima addressed the nation in Dutch (which at the time she only spoke to basic conversational extent) during the live televised broadcast. Máxima was granted Dutch citizenship by a royal decree on 17 May 2001 and now has dual citizenship: Argentine and Dutch. The engagement was formally approved by the States General later that year — a necessary step for Willem-Alexander to remain in line to the throne.

By a decree issued on 25 January 2002, upon the solemnization of marriage, Máxima Zorreguieta was granted the titles Princess of the Netherlands and Princess of Orange-Nassau, and the style Royal Highness was formally conferred upon her. She also became “mevrouw van Amsberg” (Mrs. van Amsberg). Another decree issued on the same day also granted her own personal coat of arms and a personal standard.

Máxima and Willem-Alexander married on 2 February 2002 in a civil ceremony in the Beurs van Berlage, Amsterdam, which was then followed by a religious ceremony at Amsterdam’s Nieuwe Kerk (“New Church”). The couple has three daughters: The Princess of Orange, Princess Alexia, and Princess Ariane.

Máxima’s parents were not present at the wedding; her father was told he could not attend due to his role as a cabinet minister during the National Reorganization Process, and her mother chose not to attend without her husband.

On 13 May 2011, the Dutch parliament confirmed that Máxima would become queen consort of the Netherlands upon her husband’s accession, after a debate over her future title and style. On 28 January 2013, it was announced that Queen Beatrix would abdicate on 30 April in favor of Willem-Alexander. Máxima is the kingdom’s first queen consort since Princess Emma of Waldeck and Pyrmont, the second wife of William III. She is the first Dutch queen to have been born as a commoner, and the first to have been born outside Europe.

Queen Máxima has a particular concern for the integration of immigrants into Dutch culture. She was a member of a special parliamentary commission which sought to recommend ways to increase the participation of female immigrants in the workforce. Máxima stresses the importance for immigrants of learning the Dutch language (as she did) in order to fully participate in Dutch society. Dutch is the Queen’s third language; she is also fluent in Spanish (her native language) and English. She speaks French to a conversational level.

She participates in conferences around the world representing the Netherlands. She was granted a seat in the Dutch Council of State on 20 October 2004, the highest advisory body and court of administration. She was a member of the Committee for Ethnic Minority Women’s Participation from July 2003 until 2005. She has a seat on the board of governors of the Chair on the Management of Diversity and Integration at the Vrije Universiteit Amsterdam; she (along with her husband) is a patron of the Orange Fund (established to promote social welfare and cohesion in the Netherlands); and she also chairs the Board of Trustees of the Prince Claus Chair in Development and Equity of the International Institute of Social Studies and the University of Utrecht.

Máxima is one of the few members of royal families anywhere in the world to be an open supporter of gay rights, and was the first member of a royal family to attend an LGBT rights conference, having attended a conference concerned with LGBT rights on 5 March 2008.

Queen Máxima has been honorary chair of the Money Wise Platform since 2010. In this capacity, the Queen focuses attention on the importance of financial education and managing money sensibly, especially where children and young people are concerned. The Queen acts as special advisor to the Platform and consults with interested parties on ways of increasing people’s financial awareness and resilience.

Since 10 June 2015, Queen Máxima has been the honorary chair of the Ambassadors for Music at School Platform. Queen Máxima has for some years been committed to giving as many children as possible the opportunity to create music.

Queen Máxima is a member of the Committee for Enterprise and Finance, which succeeded the Microfinance Council in 2011. The Queen is committed to extending the reach of various financing opportunities, both through coaching and by providing credit for new and existing small businesses in the Netherlands. She also works to increase the number of women entrepreneurs and the scope they have to expand their businesses.

Queen Máxima currently serves as the United Nations Secretary-General’s Special Advocate for Inclusive Finance for Development (UNSGSA). The UN Secretary-General Ban Ki-Moon designated her to this role in September 2009 in order to raise awareness on the importance of inclusive financial systems for achieving economic and development goals such as poverty alleviation, food security and education. In her work as UNSGSA, the Queen focuses on how formal financial services such as savings, insurance, and credit can prevent people from falling into poverty due to expenditures on healthcare, and people who are not able to protect themselves against rising food prices and poverty because they do not have access to basic savings accounts. The role of the UNSGSA is to foster action by governments, private sector, financial system standard setters, and others towards a more inclusive financial system that works for the poor.