The Olsen Gang in Jutland 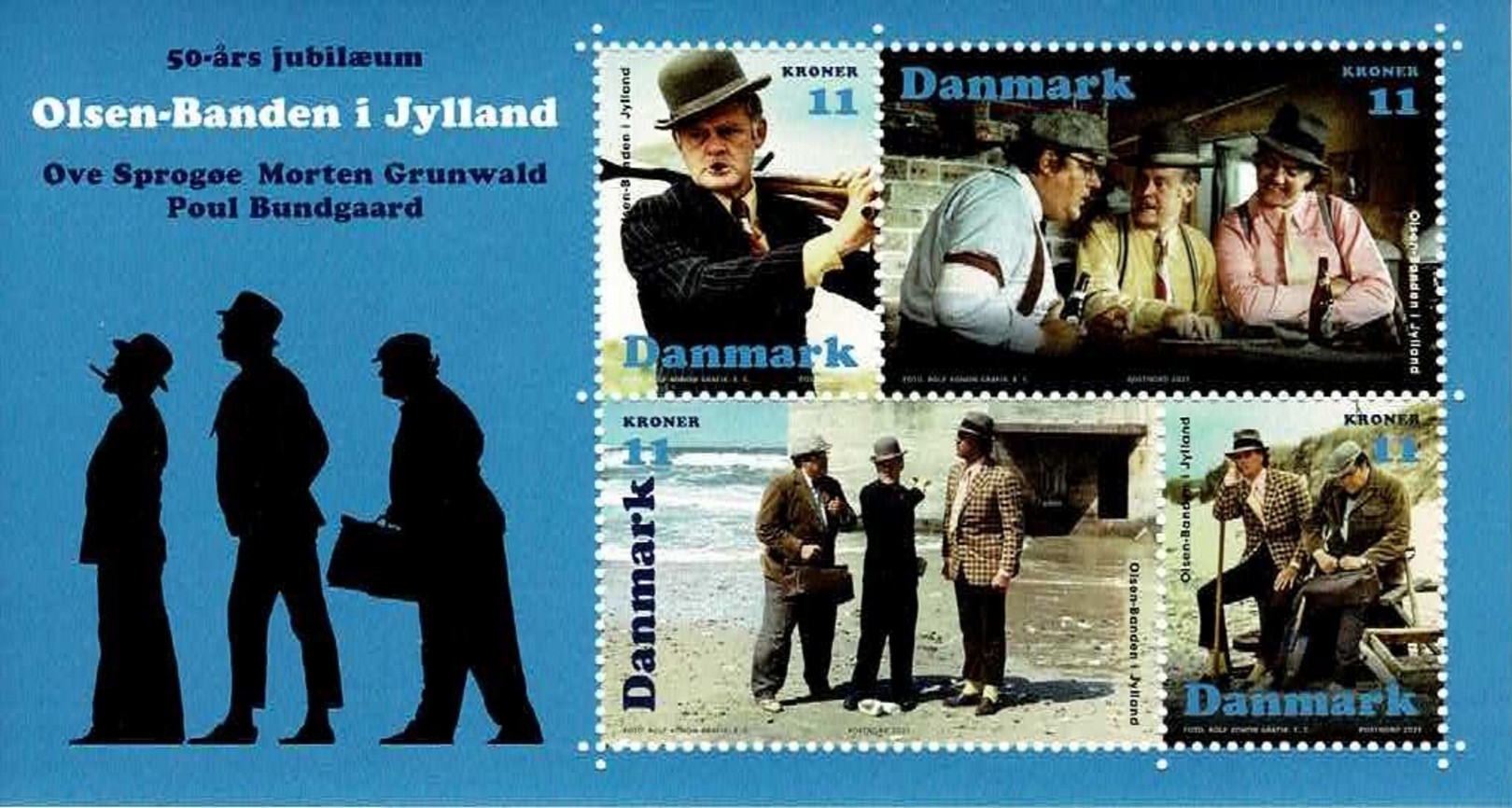 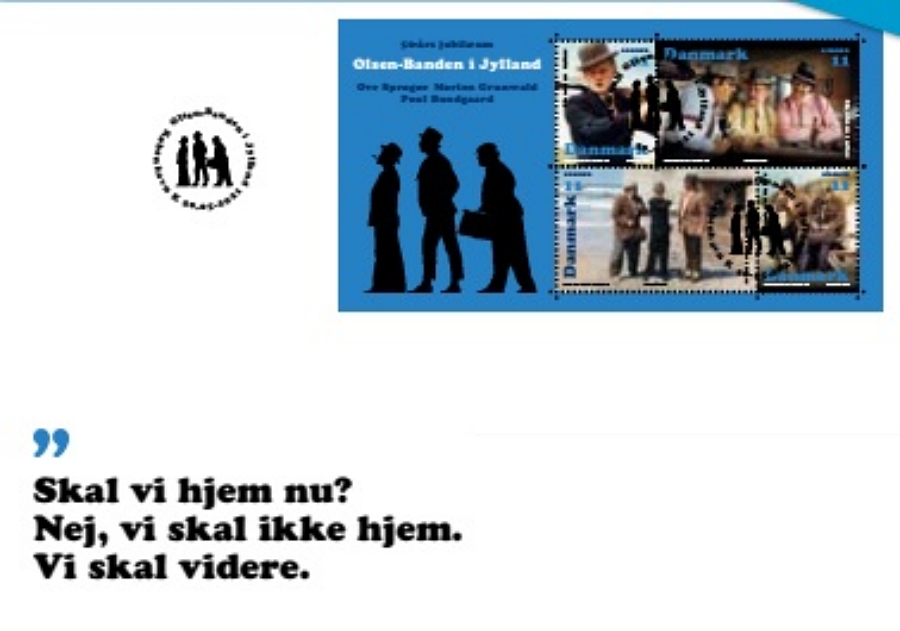 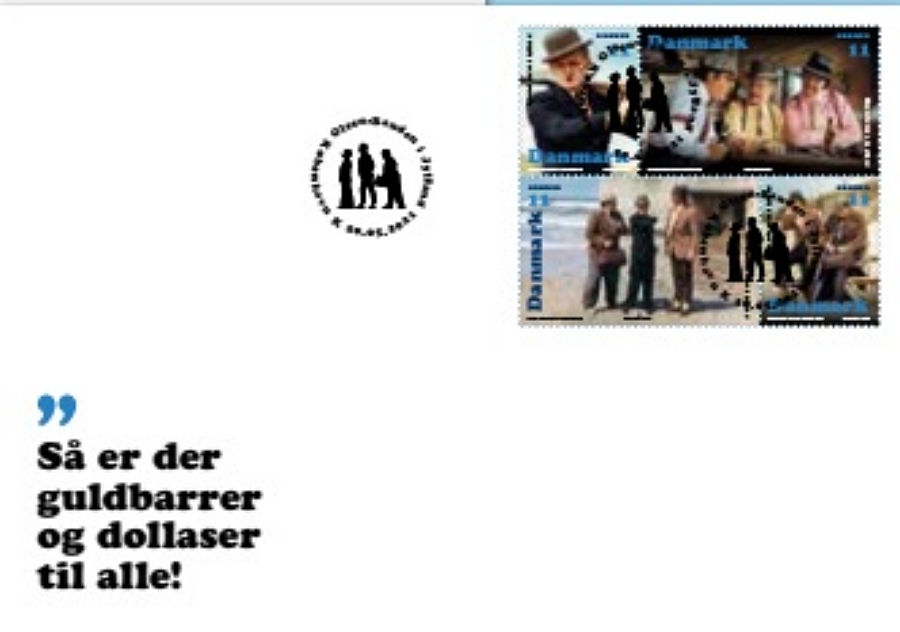 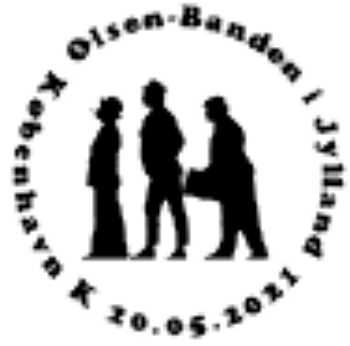 Olsen-Banden i Jylland / The Olsen Gang in Jutland

For the 50th anniversary of the premiere, we will be issuing a minisheet featuring photos from the film.

There are few Danish films that are still as popular – if not more so – than when they were first released 50 years ago. One member of this elite group is Olsen-Banden i Jylland (The Olsen Gang in Jutland), which first graced cinema screens back in the autumn of 1971. The film sold only 338,898 tickets at the cinema, but its popularity has increased over the years. It is the third film of a total of 14, and the first in which you
really see the popular characters from the film fall into place. 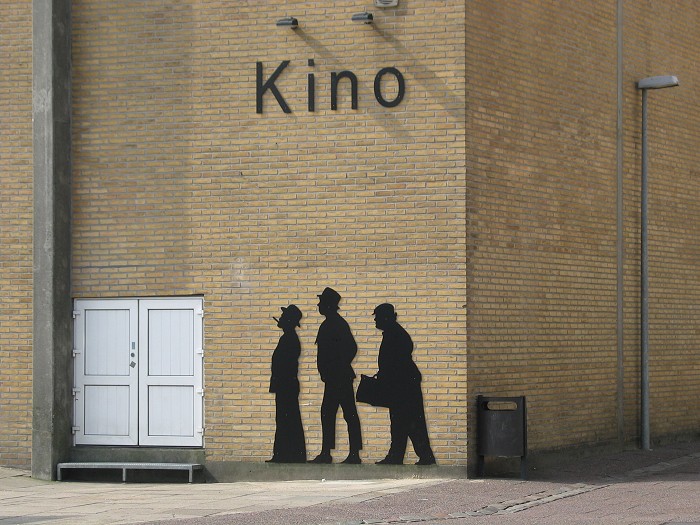 The Olsen Gang (Danish: Olsen-banden, Norwegian: Olsenbanden, German: Die Olsenbande) is a Danish comedy film series created by Danish director Erik Balling and special effects expert Henning Bahs about the eponymous fictional criminal gang. The gang’s leader is the criminal genius and habitual offender Egon Olsen and his accomplices are Benny and Kjeld (Kjell in Norwegian). The gang members are harmless, extremely rarely target ordinary citizens, and never use violence. The first film came in 1968; during the next thirty years a total of fourteen films were made.

A Norwegian version of the film series was also made (a total of 14 films from 1969 to 1999), in most cases based directly on the scripts for the Danish films. Later, starting in 1981, Sweden also produced their own version: Jönssonligan. 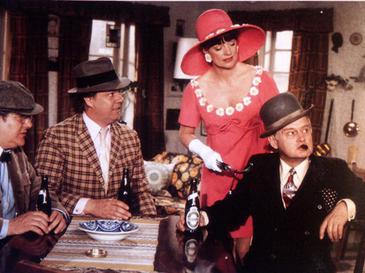 Most of the films start with Egon coming out of jail and being enthusiastically welcomed by Benny and Kjeld. The three men will then have a beer together in the living room of Kjeld’s dilapidated home in a run-down Valby neighborhood, where Egon will inform his friends of his latest plan, usually (but not always) for making them millionaires. Plans are often two-step plans, where the first heist will get the equipment for the real, second plan. The plans usually feature everyday artefacts such as Lego, party balloons, cigarettes etc., which are then brought together in surprising ways in elaborate and well-timed plans, often including clever social engineering. Benny’s main function in the heists, besides get-away-driver, is often as keeper of “The Thing”, a specially shaped metal piece used for manipulating most any machinery or opening doors. Egon often serves time with lawyers or executives who provide him with the information he needs, such as duty rosters for the national public record office. Egon is also a brilliant safecracker, operating manually, specializing in the fictive “Franz Jäger” brand.

Egon’s plans often bring the gang into perilously close contact with white-collar criminals from the Danish business (and political) elite. For example, in one episode some well-connected people try to make money out of the so-called “butter mountain”, a huge amount of butter bought up and stored by the EEC (now the EU) to keep prices up. Egon Olsen learns about this from a lawyer who is serving prison time, and the gang interferes with the plan to secure the millions for themselves. But as always, Egon – after having succeeded with a genius plan – fails for a variety of reasons, for instance underestimating the power and unscrupulousness of these people, bad luck, interference from Kjeld’s wife Yvonne or other surprising elements. For several movies the role of antagonist was filled by CEO Hallandsen of the fictive, multinational company Hallandsen Inc. – or variations thereof. Egon is usually arrested in the end, for various reasons: scapegoat, bad luck, some completely irrelevant crime, or even turning himself in as a matter of honour.

A recurring part of the films is making fun of Danish authorities, especially the police. In some earlier episodes, the clumsy Police Inspector Mortensen is used for slapstick comic relief; he is later replaced by Superintendent Jensen, an older, frustrated man who has seen better days. He is a resigned character who has pretty much given up on trying to solve any crimes at all; as he mentions to his assistant, Inspector Holm: “The only thing the police can do when the real big criminals come by is offer them protection!” Jensen incredulously uses the recurring exclamation “Bagmændene!” (Behind-men/Big Fishes) to reference the in-joke of powerful players moving outside of the law.

In the early episodes, profanity and soft-erotica (scantily-clad women) were more freely used than in later ones, where said content was somewhat watered down to suit younger viewers. Later movies focused on the satirical interplay between Jensen and Holm and Egon and his crew, with a frequent outburst of anger from Egon. His long list of slurs is especially famous, like “social democrats!”, “insane woman!” (to Yvonne), “lousy amateurs!”, “cowards!”, “dog heads!”, “porridge peasants!”, “sop!”, “scumbags!”, to name a few.

The Olsen Gang in Jutland (Danish: Olsen-banden i Jylland) is a 1971 Danish comedy film directed by Erik Balling and starring Ove Sprogøe. The film was the third installment in the Olsen Gang-series.

The film starts like most of the Olsen-gang films, with Egon being released from The State Prison in Vridsløselille. The gang goes back home to Kjeld and Yvonne to discuss their next caper. Unlike most other Olsen Gang films, this heist will take place in Jutland. Egon has obtained a map for a treasure stored in an old German command bunker on the west coast. To get to Jutland they must cross the then newly built Little Belt Bridge. But two other criminals (Helle Virkner and Willy Rathnov) have also got wind of the story. And the Olsen Gang do not make it easier for themselves by taking Yvonne along. And they mistakenly believe that it will be easy to fool the locals – especially they misjudge the wily scrap dealer (Karl Stegger) and his mute assistant (Preben Kaas). They soon become much, much wiser. A bomb left over from the war gives Kjeld a short, but very significant, shell shock, which causes him to stylishly carry out a terrific ride in a runaway dump. Not surprisingly, a planned Majorca trip gets postponed.

Most of the film was shot in Vigsø Bugt east of Hanstholm in 1968. 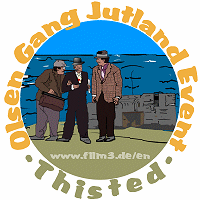 Trivia
The fictitious place where this film is set (actually filmed in and near Hanstholm and Vigsø in Northern Jutland) is called Hauerslev, which is a reference to Erik Hauerslev, then head of the Danish Film Foundation. Before arriving in Hauerslev, the gang can also be seen passing villages bearing the names of Sevel and Balling. While these, in contrast to Hauerslev, are real place names and were both filmed on location (both belonging to the northern parts of Central Jutland), both are referring to people involved in the film as well: Erik Balling was, of course, the film’s director; while Ove Sevel was by then the head of the production company, Nordisk Film.

Egon discovers a portrait of Adolf Hitler in the Nazi bunker. In the dubbed version by DEFA in East Germany, this shot was cut out. (It is only visible in the 2005 DVD edition by ZYX, which used the restored Danish footage.)

Rico’s Porsche should be destroyed in Betterøv’s scrap metal press. However, the filmmakers did not want to scrap such an expensive car, so they used a VW Beetle which was painted in the same yellow tone.

During the time of filming in Jutland, Poul Bundgaard had a theatre commitment in Copenhagen, so he was flown to the capital in a private plane every afternoon and back to Thisted Airport at night.

This is the first of only four Olsen Gang films that start directly with Egon being released from Vridsløselille State Prison, without any other prologue (not counting Olsen-banden over alle bjerge! (1981), which uses footage from the previous film as a flashback).

When the entire cast and crew had arrived on location in Jutland, Ove Sprogøe told costume designer Lotte Dandanell that the bowler hat she had brought from Copenhagen was not the one he usually wore as Egon. Dandanell was absolutely sure that she had brought the right hat, but Sprogøe insisted on that issue, and finally persuaded director Erik Balling and executive producer Bo Christensen to send Dandanell back to Copenhagen by plane over night to look for the right hat at the costume department of Nordisk Film. Of course she did not find anything, and when she came back to Jutland, even Ove Sprogøe had to accept that he had been mistaken.

Erik Balling and Henning Bahs did not have the time for their usual annual writing trip to Paris; so they had to write the script for this film (unlike their other Olsen Gang scripts) in Copenhagen.

The Jutlandic gas station assistant was played by Tage Rasmussen, a real gas station assistant from that region. Director Erik Balling did not find an actor with the North Jutlandic dialect that this character should speak. Another amateur actor in the movie is Niels Harbo, a fisherman who can be seen in the first scene with Mads Madsen (Karl Stegger).

Ove Verner Hansen was originally in the movie, but when Karl Stegger got sick the script had to be changed.

The grenade at the end of the movie, was made of wood.