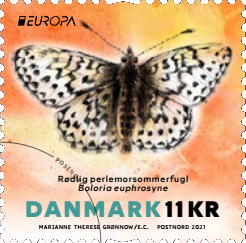 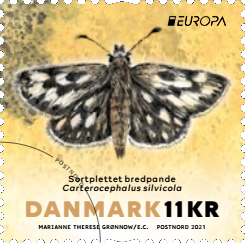 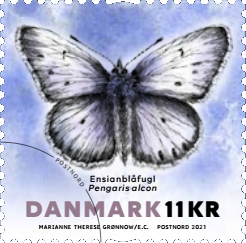 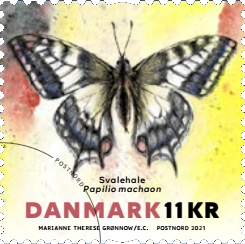 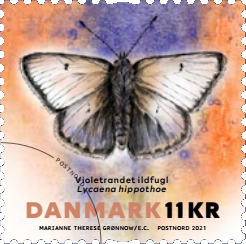 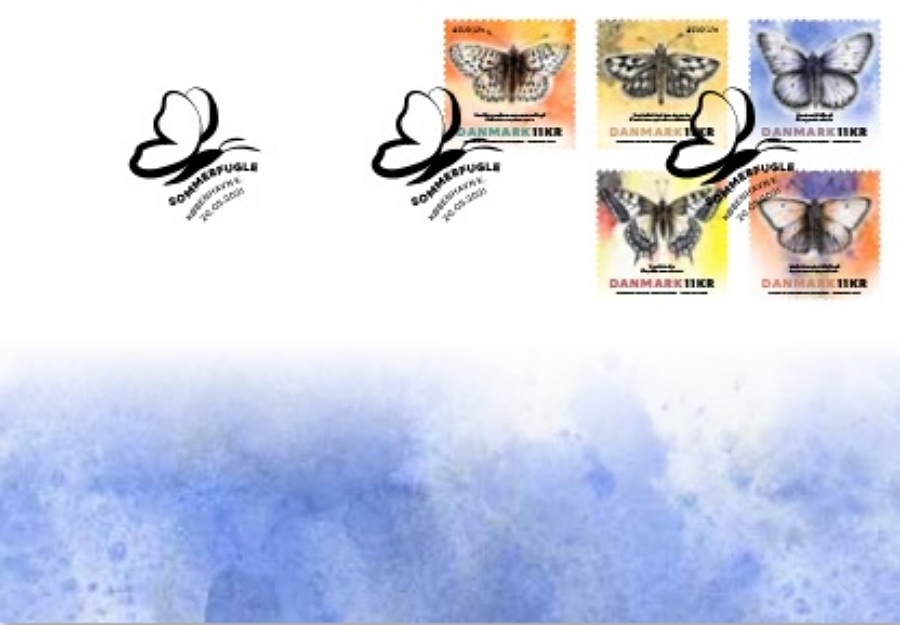 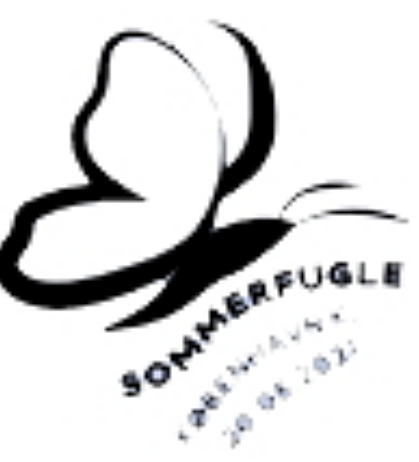 The Pearl-bordered Fritillary, the Northern Chequered Skipper, the Alcon Blue, the Common Yellow Swallowtail and the Purple Edged Copper.

Will you remember the names? These are five species of butterfly that are in the process of disappearing from the Danish natural environment. There are around 100 species of butterflies in Denmark, but the lack of flower-rich habitats and several dry summers in a row have particularly contributed to the rapid decline of these colourful insects.

The stamps here focus on five of the endangered species because these insects are having a difficult time, and many species are unfortunately on the verge of disappearing completely from the Danish natural environment. Two of the stamps are part of the EUROPA 2021 Endangered National Wildlife theme.

The beautiful motifs are the work of visual artist Marianne Grønnow.

They are beautiful and amazing. They fill us with joy and nature with life.

But many butterflies are endangered or are becoming more and more rare. They’re losing their homes.

When draining a bog or meadow to grow the soil, the plants that butterflies need to suck off nectar or lay eggs disappear.

That’s the end of the butterflies.

Many animals feed on butterflies, so with them their food disappears.

A world without butterflies will be a poorer world.

More than half of our 75 day butterfly species are in decline. Their habitats disappear because we humans use their space.

If the negative development continues, we risk having only half as many day butterflies left in Denmark compared to when our grandparents were children.

Once they’re away from an area, they’ll probably never come back. They cannot wander back again from other areas where they exist. There are often too far between good natural areas, and they cannot fly over our many cities, roads, fields, etc.

Nature in an area is good when there are many butterfly species. Conversely, nature feels bad when the butterflies disappear.

We help the butterflies

The Nature Fund provides for several natural areas where the butterflies can live.

We provide more flower-rich and varied natural areas so that the butterflies can thrive again.

We create more habitats for endangered and rare species, but also for common species.

At the same time, more nature provides more habitats for many other species of animals, plants and fungi 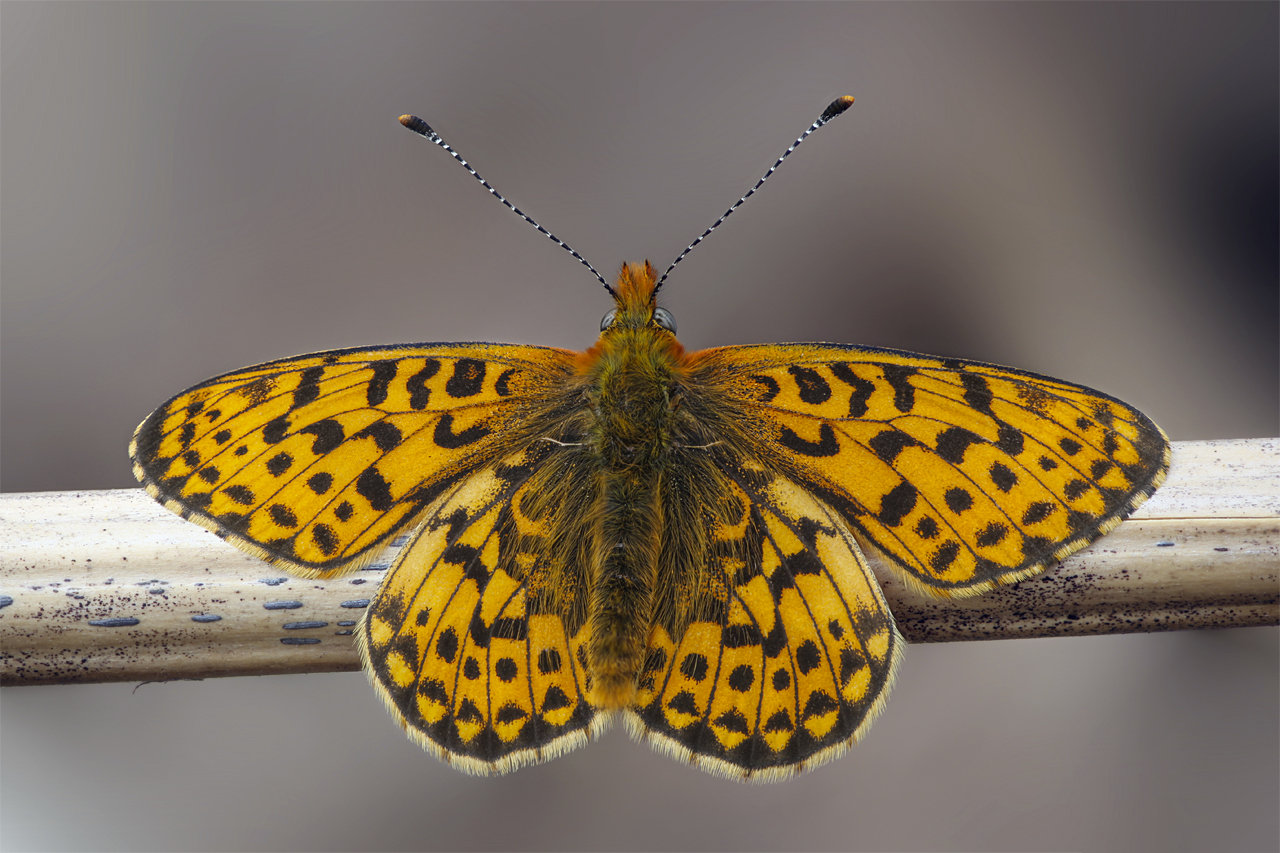 The pearl-bordered fritillary (Boloria euphrosyne) is a butterfly of the family Nymphalidae found in Europe and through Russia across the Palearctic to the north of Kazakhstan.

The adult butterfly is orange with black spots on the upperside of its wing and has a wingspan of 38–46 mm. The underside of the wings have a row of silver-pearly markings along the edge, which give the species its name. The pearl-bordered fitillary is often confused with the small pearl-bordered fritillary, but can be distinguished by the triangle along its pearl border (the small pearl-bordered has black chevrons) as well as the presence of a single silver spot in the middle of a row of yellow spots. The female has darker markings and rounder wings than the male. The caterpillars are black with white or yellow spines along their backs.

Like other species of fritillary, the males have special scent glands on their wings so that they can be recognized by females of their own species and therefore find a suitable partner. 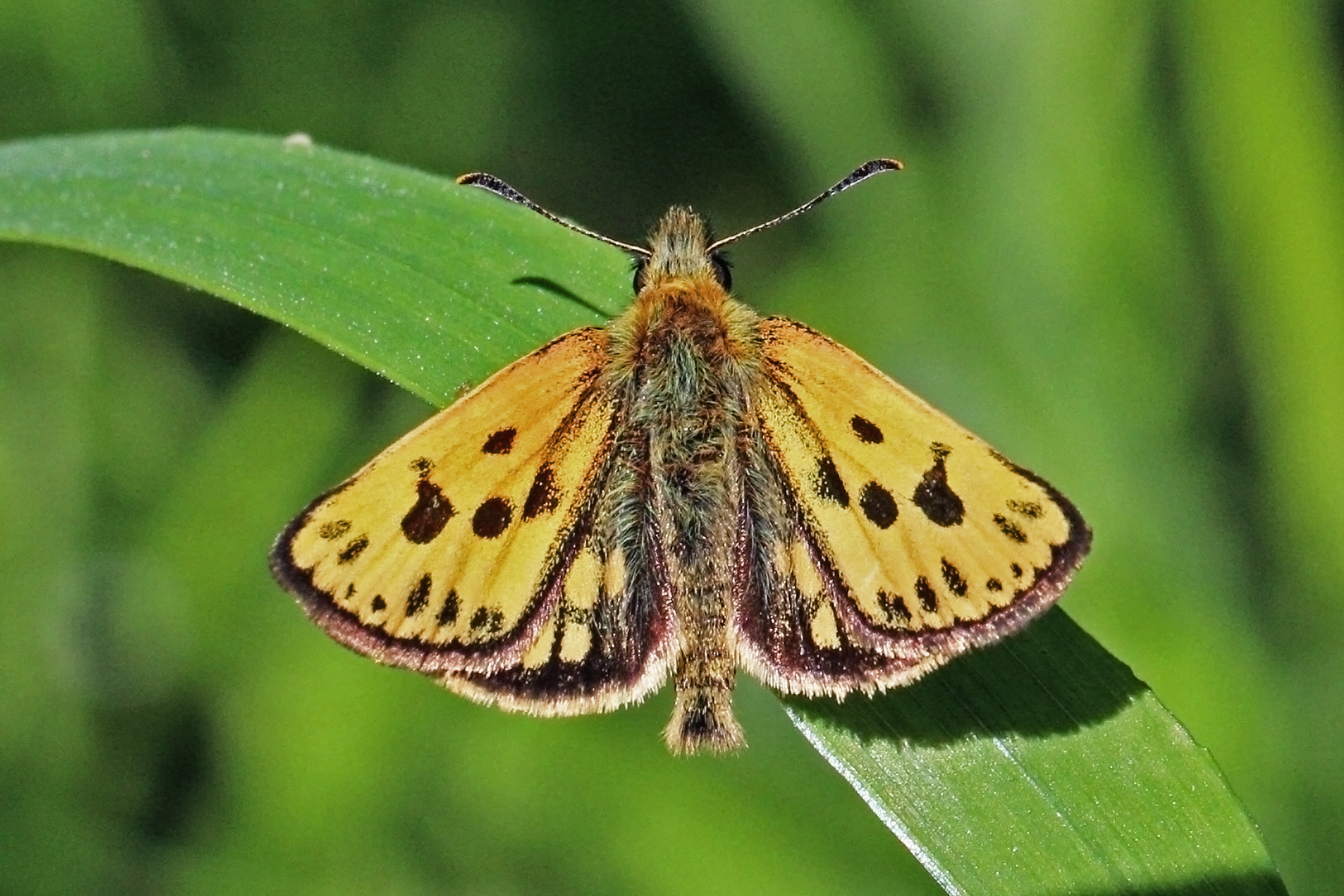 Carterocephalus silvicola, the northern chequered skipper, is a butterfly of the family Hesperiidae. It is found in northern Europe and north and east Asia. The butterfly flies from May to June depending on the location. The larvae feed on various grasses. 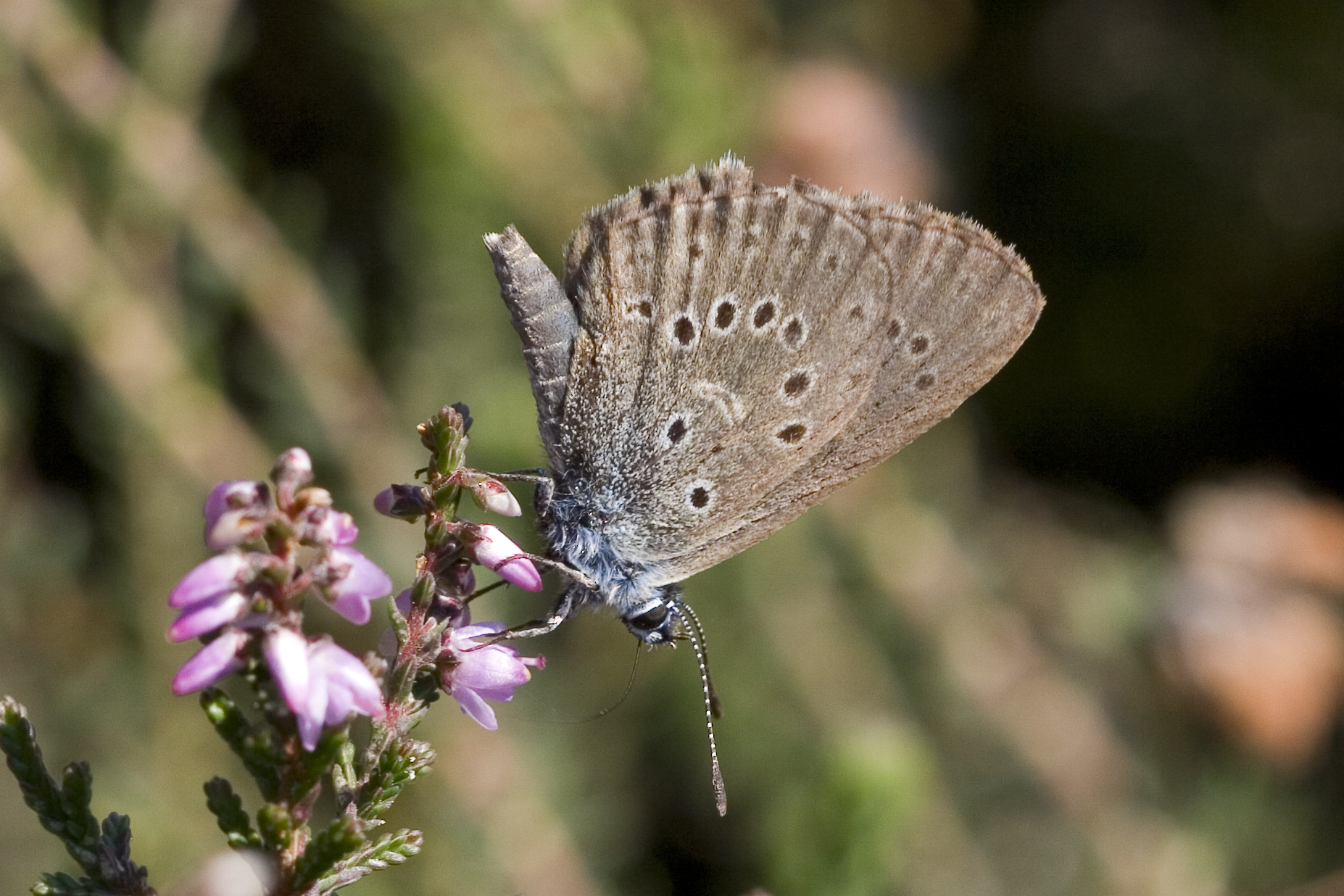 Phengaris alcon, the Alcon blue or Alcon large blue, is a butterfly of the family Lycaenidae and is found in Europe and across the Palearctic to Siberia and Mongolia.

The species can be seen flying in mid- to late summer. It lays its eggs onto the marsh gentian (Gentiana pneumonanthe); in the region of the Alps they are sometimes also found on the related willow gentian (Gentiana asclepiadea). The caterpillars eat no other plants. 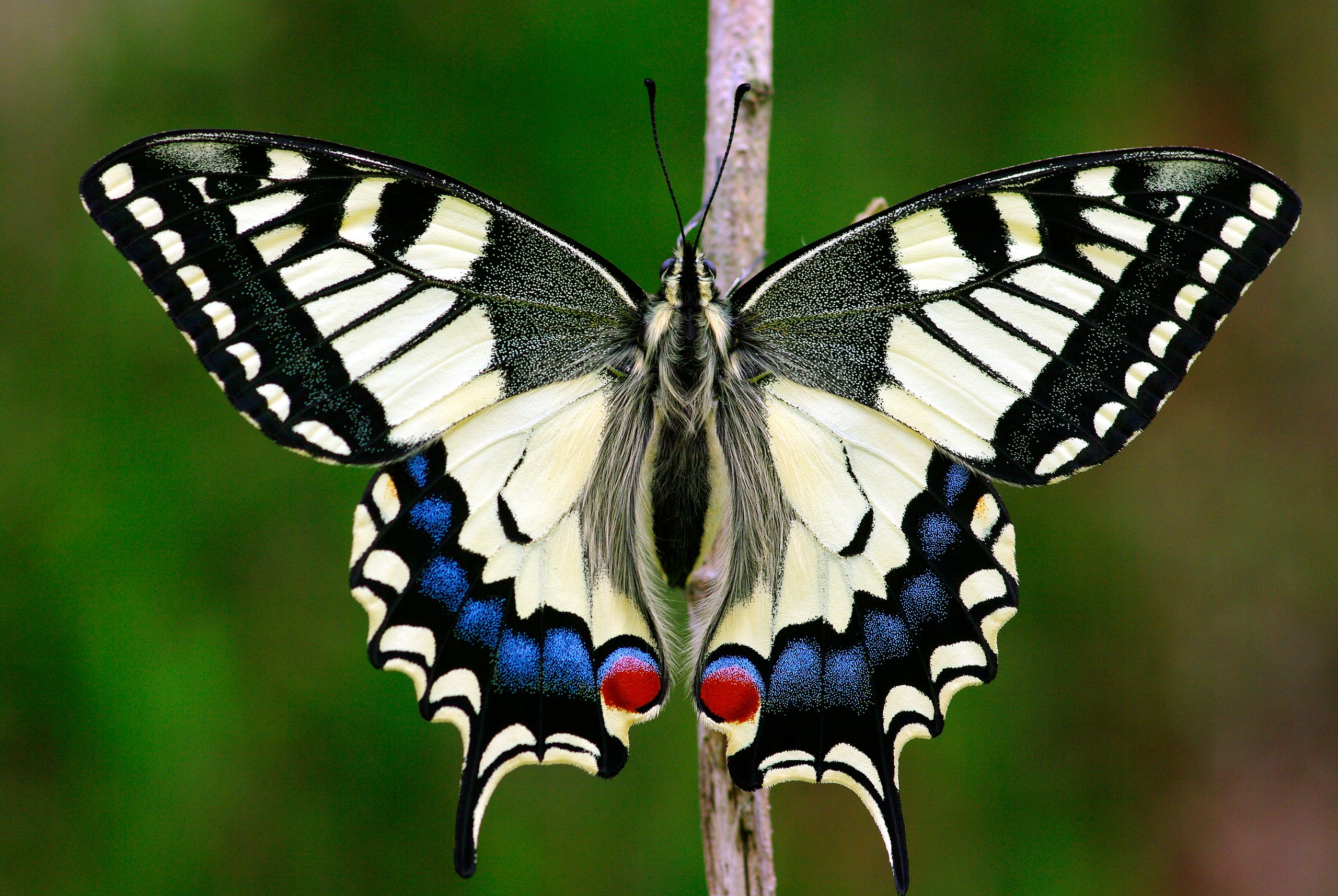 Papilio machaon, the Old World swallowtail, is a butterfly of the family Papilionidae. The butterfly is also known as the common yellow swallowtail or simply the swallowtail (a common name applied to all members of the family, but this species was the first to be given the name). It is the type species of the genus Papilio. This widespread species is found in much of the Palearctic (it is the only swallowtail in most of Europe) and in North America.

Named for Machaon (ancient Greek: Μαχάων) a figure in Greek mythology. He was a son of Asclepius.

Papilio machaon was named by Carl Linnaeus in the 10th edition of Systema Naturae in 1758, alongside nearly 200 other species of butterfly. Later, Pierre André Latreille designated it as the type species of the genus Papilio. Papilio appalachiensis and Papilio xuthus are also of the same genus. The specific epithet machaon refers to Machaon, son of Asclepius in the works of Homer. 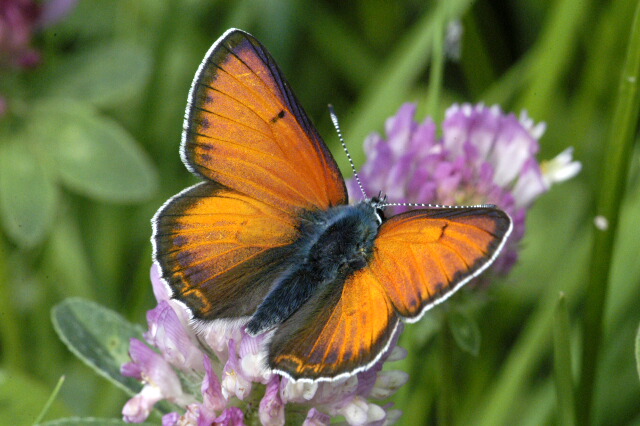 The purple-edged copper (Lycaena hippothoe) is a butterfly of the family Lycaenidae. This species is present in the Western Europe and in Siberia up to the region of the river Amur. It inhabits forest edges, swampy and damp meadows, clearings and river banks, at an elevation of 400–1,800 metres (1,300–5,900 ft) above sea level.
Lycaena hippothoe can reach a wingspan of 34–38 millimetres (1.3–1.5 in). The upperface of the wings is deep orange-red in males, with a brown or purple edging (hence the common name). The spots in the forewing post discal row form an arc. The female’s appearance varies between subspecies, they are usually very dark brown, with brown spots on the forewings. The underside is virtually the same in both sexes. It is light orange and light brown with brown-black spots surrounded by white. The larvae are green and grow up to 20 millimeters long. This species is rather similar to Lycaena alciphron and Lycaena virgaureae.

Wikipedia (as linked above)