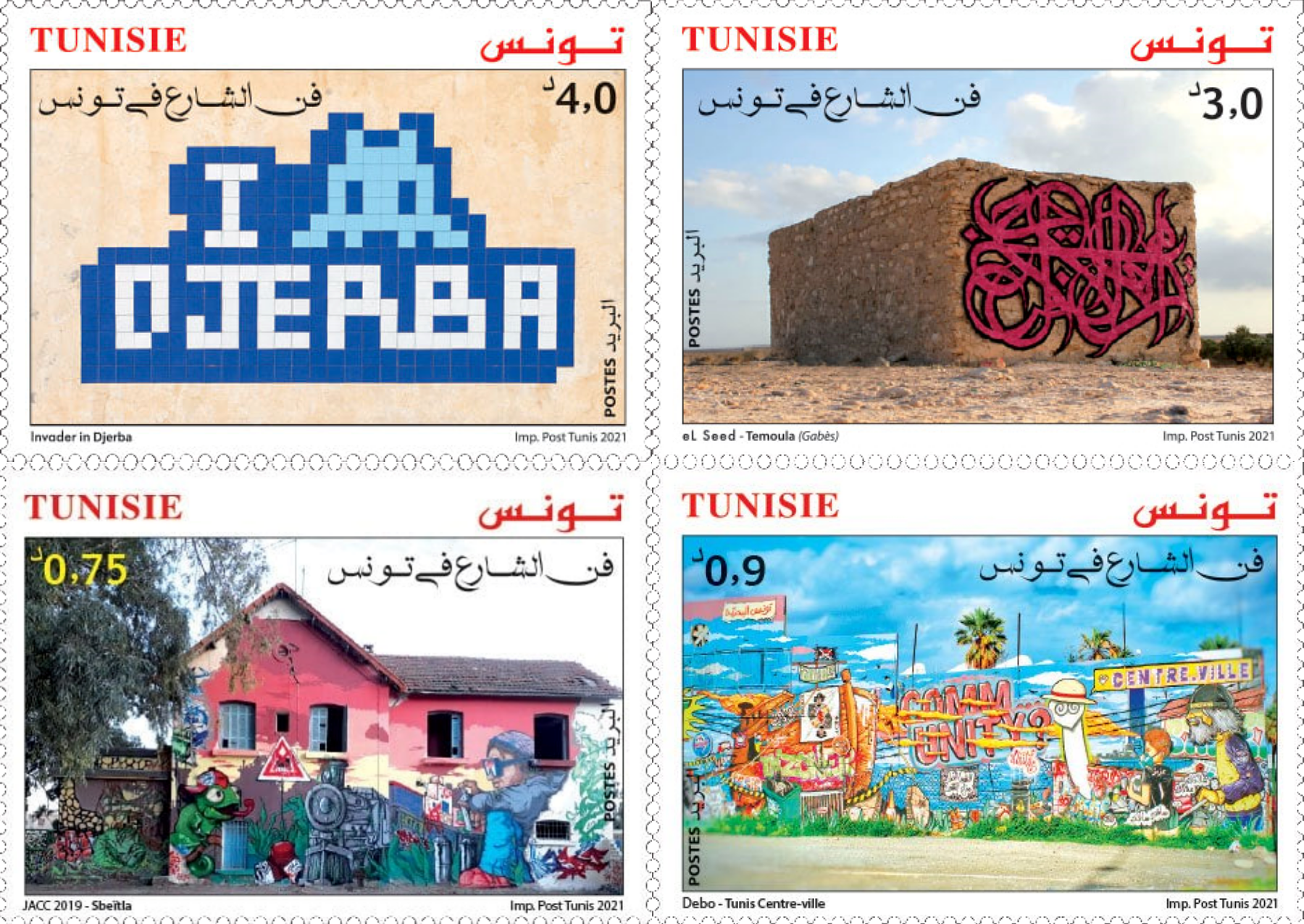 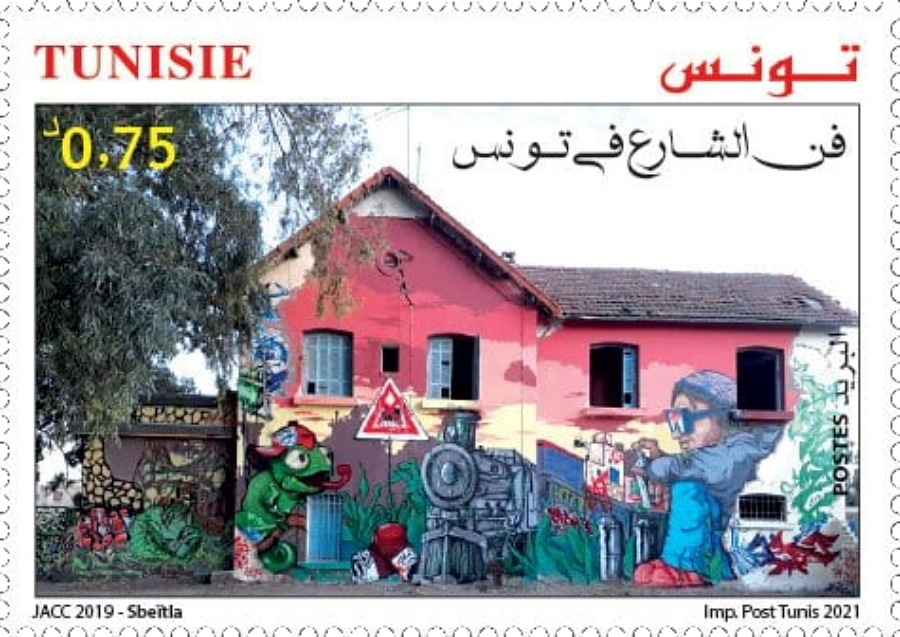 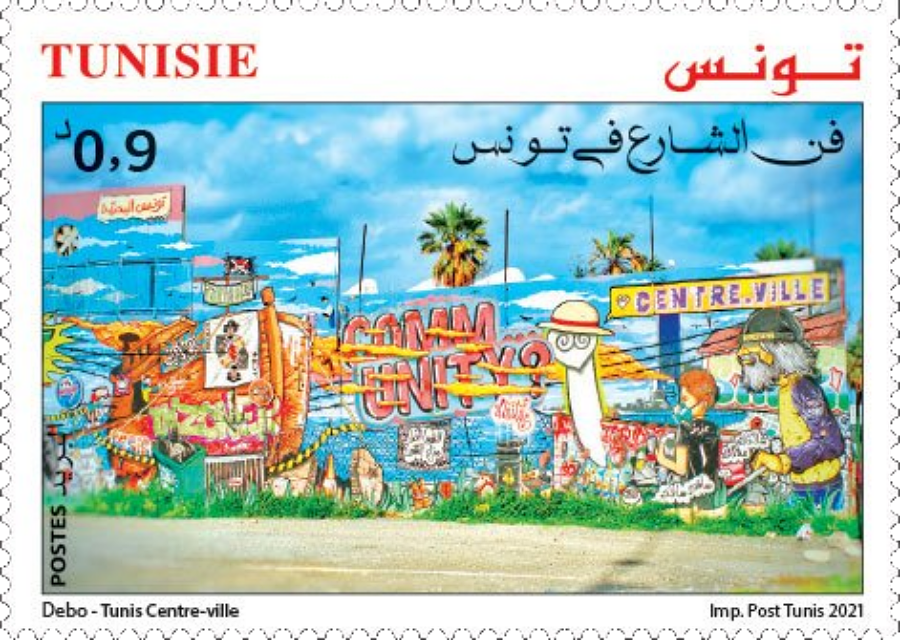 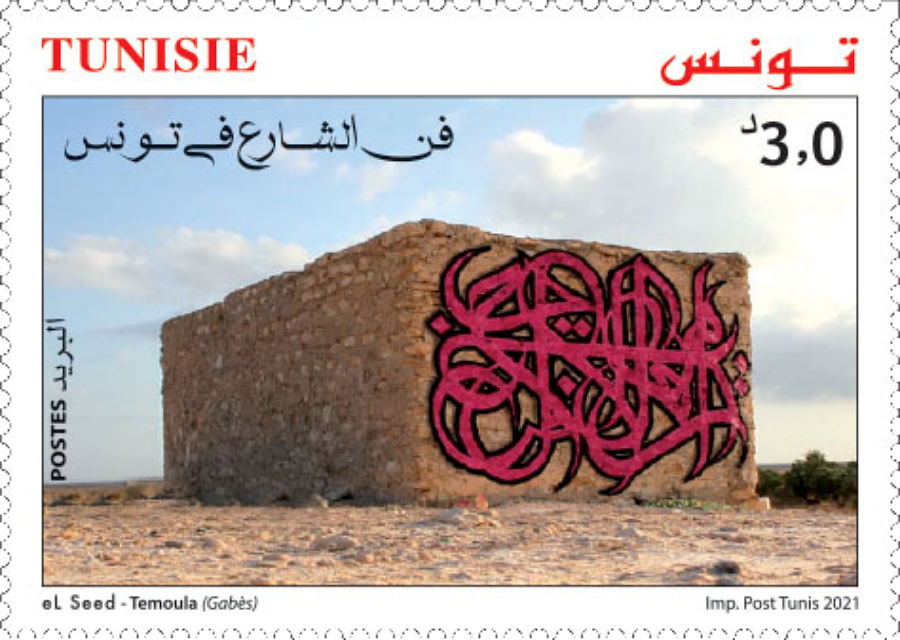 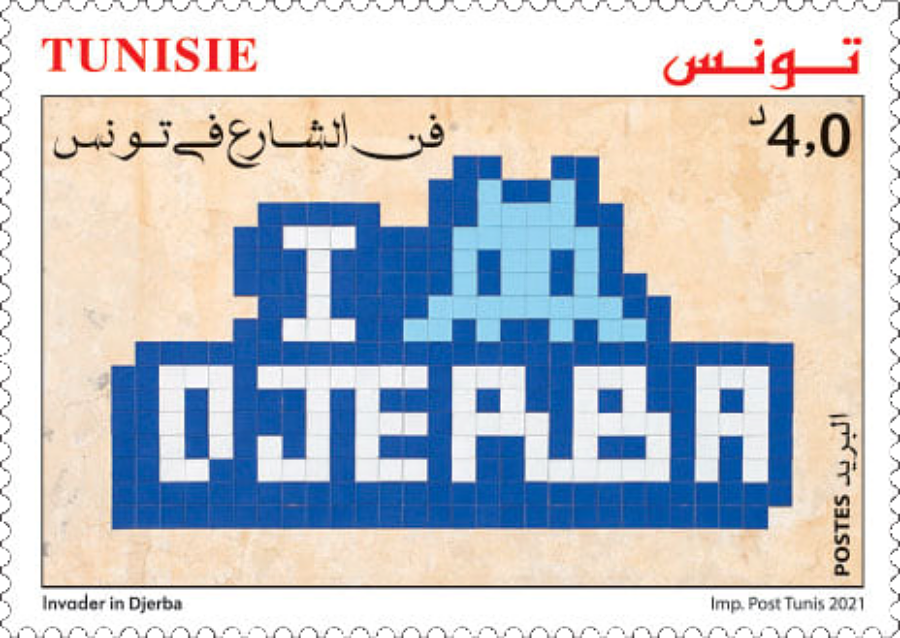 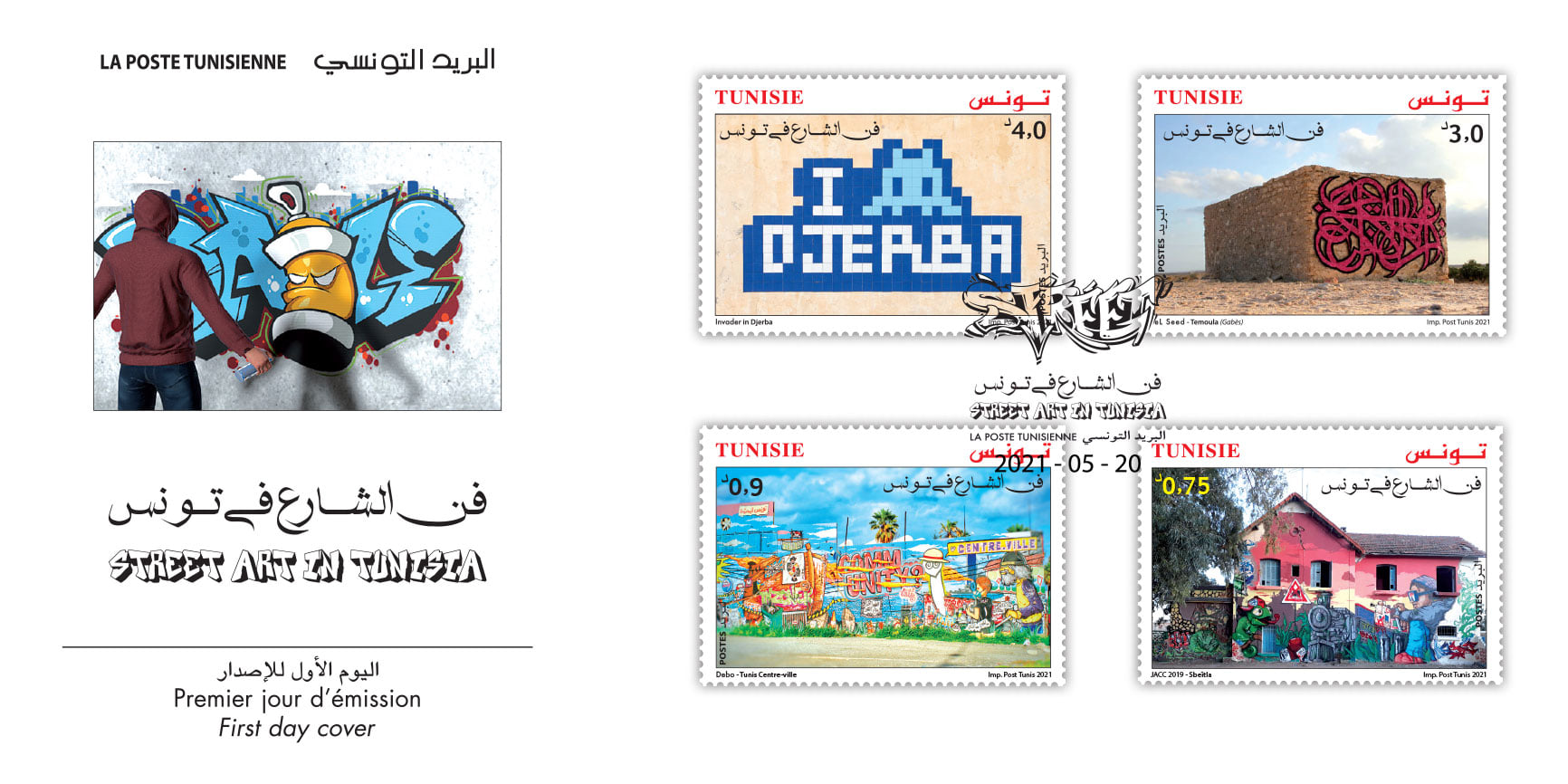 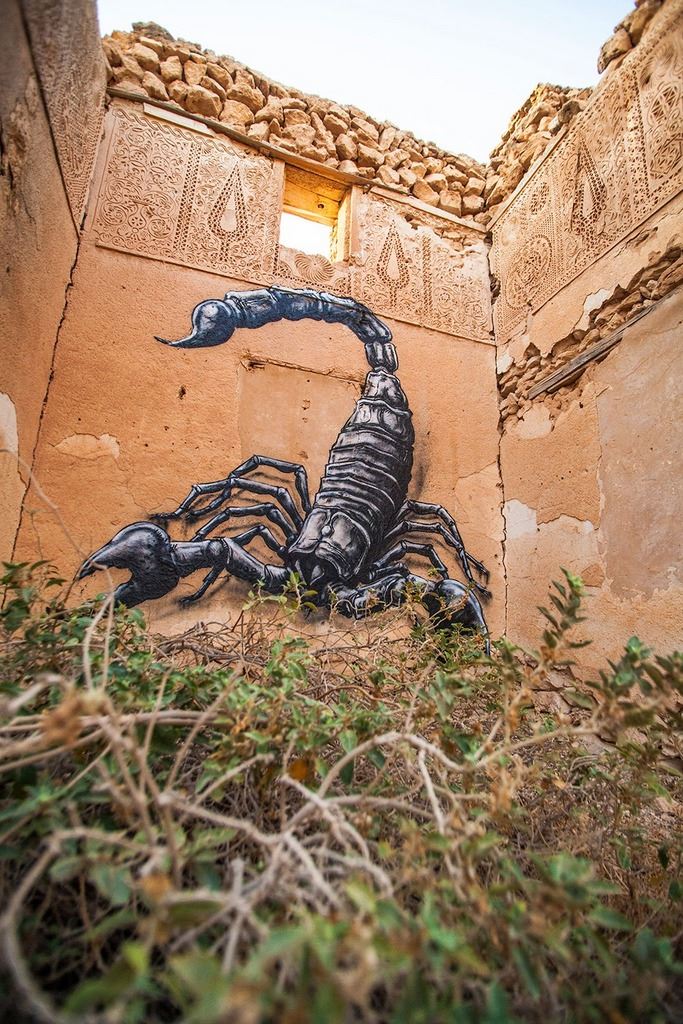 Not only did the Jasmine Revolution of 2011 spark political change, but it also brought forth a boom of new artistic and cultural expressions and production. Such new performances have become more popular as talented individuals and groups demonstrated their skills in the public sphere. This has taken different channels and modes of expression that have emerged in the streets, such as spray painting, graffiti, wall writings, tagging, murals, live music, dancing, public shows, theater, and other art forms. The wide expansion of these spontaneous performances amidst the political uprisings has helped to retrieve public space from the dominance of the authoritarian regime, opening it up as a free exhibition space that incorporates all sorts of artistic demonstrations. Many artists saw this revolutionary moment as crucial for transitioning into a new democratic era in which art is not only an aesthetic act, but rather as an arm for democratization. Building on this, one could observe the political characteristics of most of those revolutionary artists who believed in the power of art in instigating significant changes in society. The issue of committed art raises again the debates between those advocated artists and intellectuals who are approaching art as something which should have a message or a clear political position. 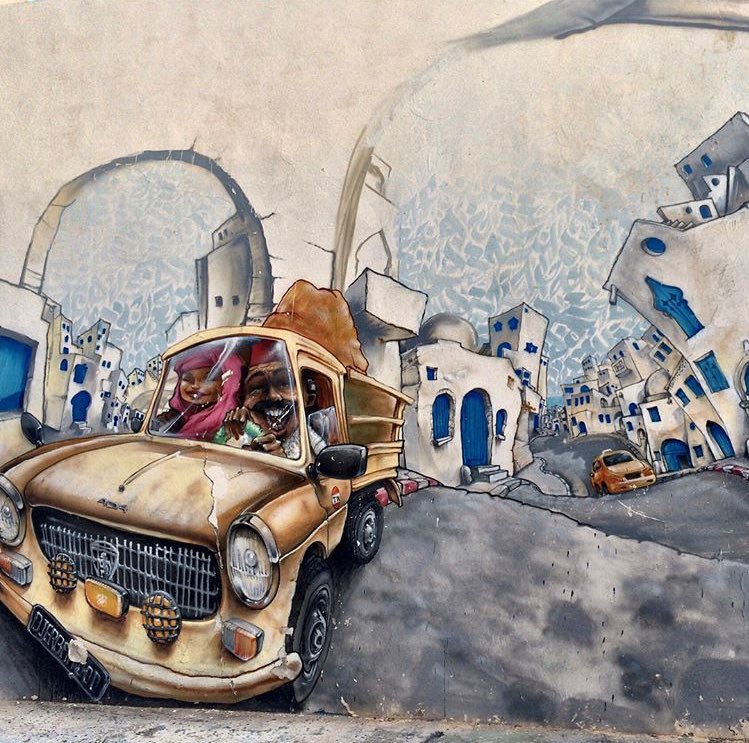 The so-called wall writings, often crudely scrawled graffiti messages, are another form of revolutionary street art that has flourished since the Jasmine Revolution. Most of these wall writings are overtly political, comprising of brief but concise and often shocking statements. This graffiti has been exhaustively documented in the work of the Tunisian photographer Mourad Ben Cheikh Ahmed, who was an active participant in the spread of Tunisian street art by publishing the messages on his photoblog Streets Post Zaba. This type of expression functions much like a tweet, brief exclamations or rhetorical questions used mostly to provoke the public into political thought. Using Tunisian dialect, Mourad Ben Cheikh is pumping offensive or taboo images into his writings so as to shock the public and awaken their conscious and provoke them to revolt against the authoritarian system. He chooses different locations, most of which are public spaces, such as public transport stations, where passers have little time to read long passages, hence his adherence to using short quotations. The ‘tweets’ are full of suggestive and evocative meaning which work as an alarming reminder to the public to consider their emerging political reality and act accordingly to secure their future.

The artistic festival held in the Tunisian city of Djerba in 2014 was described as a revolution of the walls which set loose art in the public space to revive life into the old and neglected walls. Curated by the artist Mehdi Ben Cheikh, roughly 150 international artists from thirty nationalities traveled to the island of Djerba named Erriadh, each with the task of painting murals. This was a symbolic act of resistance which revived the urban centers of this traditional village with the magic of art. Street art is used here not only as simply painting a pretty mosaic of pictures, but to reflect the peaceful qay of life of this village whose citizens live in total harmony with nature. To transform an entire village into an open-air modern art gallery is indeed a major reconciliation between art and public space, between people and their surroundings. This is why this festival was a form of protest which broke conventions and made a profound change in not only how people see art, but also how artists approach art themselves. 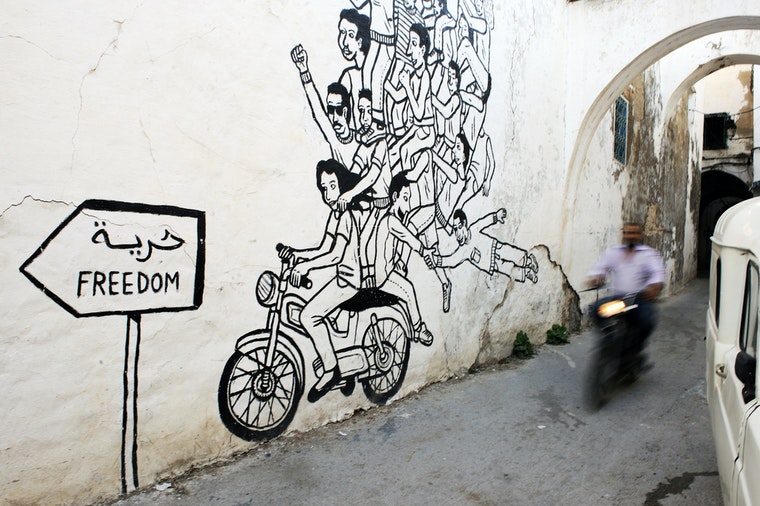 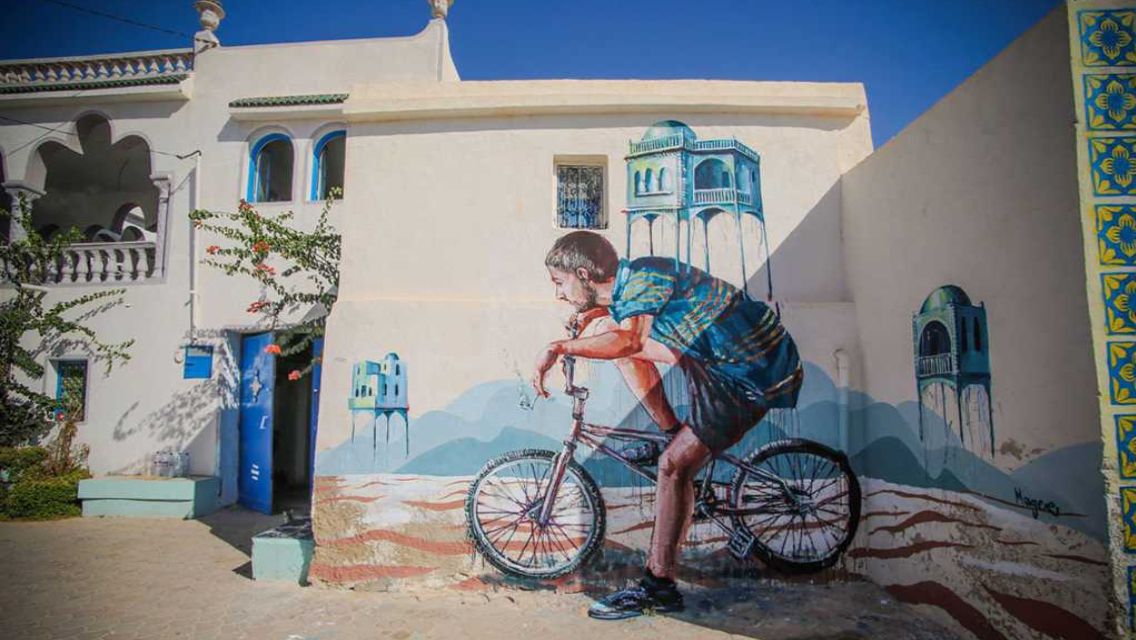 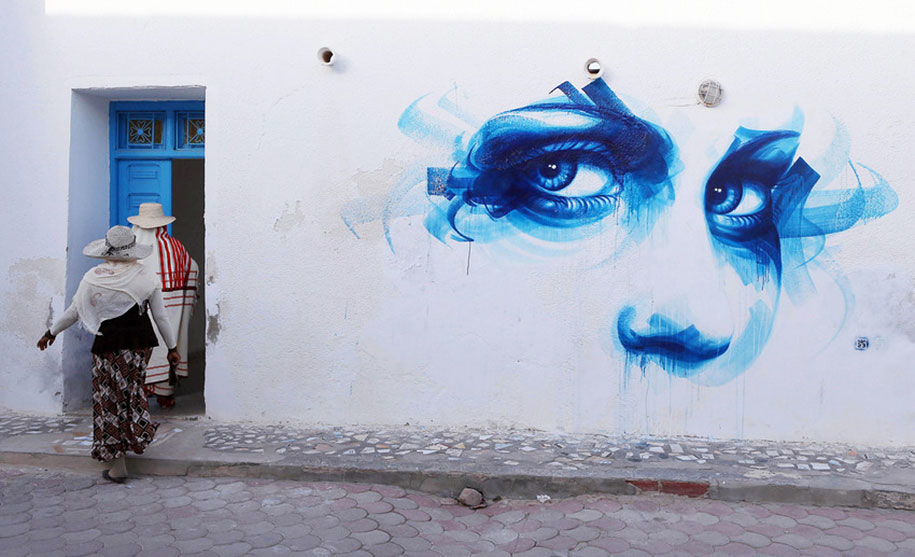 It sounds odd to invite people to scrawl over the walls of a picturesque Tunisian village. Usually, graffiti is not welcome, but what happens in Erriadh is unique. The island of Djerba – known as ‘Island of Dreams’ – has invited 150 international artists to take part in the street art project “Djerbahood”, curated by Tunisian-French artist Mehdi Ben Cheikh. In July and August 2014, artists from about 30 nations travelled to Erriadh to create murals. One of the oldest villages in Tunisia, it has become host to one of the biggest meetings of the modern street art scene.

Encouraging understanding and human connection, eL Seed’s art is a beacon of hope in a world divided. The French-Tunisian artist creates street art that seamlessly brings together the contrasting traditions of ancient Arabic calligraphy and graffiti art, using them to spread messages of freedom, empowerment and love.

Best known for the striking, disruptive murals he paints in public spaces around the world – including a controversial mural painted on the minaret of a Tunisian mosque in 2012, and a 2016 piece spanning 50 buildings in Cairo’s Manshiyat Naser neighbourhood – the artist invites us to cast aside our preconceptions about language and heritage.

Growing up in Paris in the 1980s and 1990s, he became immersed in the culture of graffiti from a young age. But it wasn’t until his late teens that the artist reconnected with his roots in Tunisia, learning to read and write in Arabic.

Experiencing the upheaval of the 2011 Tunisian Revolution first hand, eL Seed became an important part of a movement of creatives leveraging the power of art and language to provoke cultural and political change. Since then he has painted murals across Tunisia, and in London, Toronto, Doha and Melbourne, set up a studio in Dubai and collaborated with Louis Vuitton on a collection of accessories.

Placing the Arabic language at the heart of his work, eL Seed’s distinctive visual style is layered with meaning, directly addressing misconceptions around Arabic culture. Inviting us to unravel and play with the symbolic quality of language – ‘Tabula Rasa’, his first ever UK exhibition at London’s Lazinc gallery – presents a new approach to his work, with an unfinished, raw quality to his pieces.

Islamic graffiti is a genre of graffiti created by people with a Muslim background. Containing social themes, this type of art finds expression in a variety of forms. The most common languages used are English and Arabic. Like all other forms of art, graffiti can serve as a medium for instigating political or social change, or as a form of self-expression.

Sticker art refers to the practice of posting images or phrases to convey a message.

A collaborative project called “INSIDE OUT: Artocracy in Tunisia” uses sticker art to promote the spirit of democracy in post-revolutionary Tunisia. Prior to the revolution, only presidential photography could be found in the public space. A group of six photographers, along with a French graffiti artist called JR, replaced these pictures with black and white photographs of anonymous Tunisian people. Their goal is to inspire the people of Tunisia to see themselves in a new light. One of the photographers states: “If people want to tear them down, or write something on them, that’s part of the project, that’s okay.”

Graffiti as a form of communication in Palestine began in 1987 during the first Intifada. This was a period in which there were no Palestinian TV or Radio stations in the Gaza Strip. Murals commemorated martyrs as well as called protestors to action. Israeli military would force Palestinians to wash off graffiti from their homes. The Dome of the Rock was common among murals in Palestine. In 2006, Hamas took over the graffiti scene. Hamas would encourage people to perform the first of the day’s five prayers through street art. Currently, The West Bank wall is covered in graffiti. Numerous messages can be found including marriage proposals, notes to friends, and jokes. Also common are messages of peace. One reads: “Mirror, mirror on the wall. When will this senseless object fall?” “Trying to imagine a clear view between Palestine and Israel,” is another. Messages such as these splatter across the wall, and some graffiti artists will paint your message for a fee.

After growing up in Paris during the late 80s and early 90s, graffiti artist eL Seed found himself inspired by hip-hop culture. With parents from Temoula, Tunisia, he explored his North African origins by learning calligraphy. Before becoming an artist, he pursued degrees in marketing and business. After befriending a graffiti artist known as Hest1, he began to combine his love of graffiti and calligraphy. Today, he creates both personal exhibitions as well as murals for commission.