Devoted to Your Service: 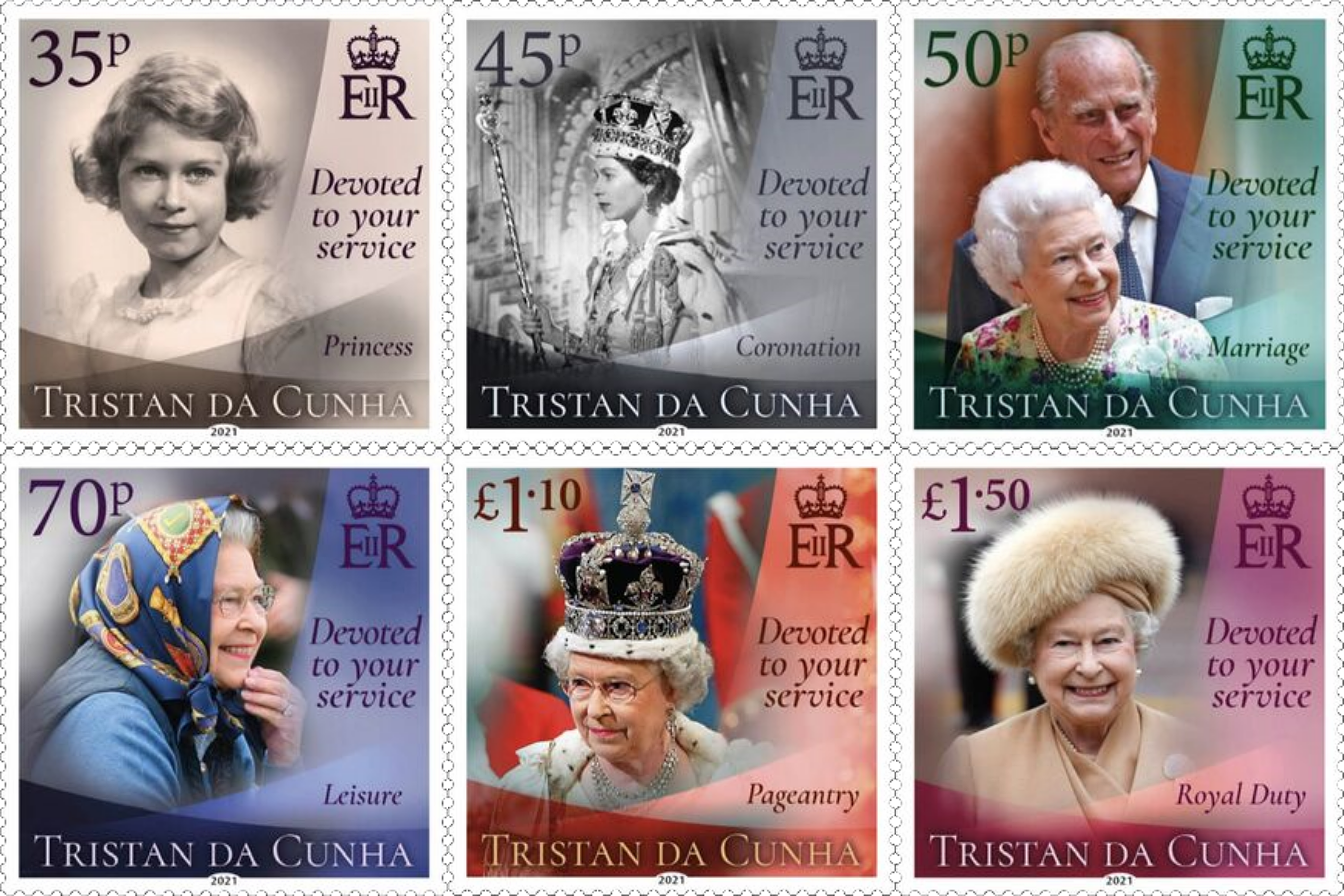 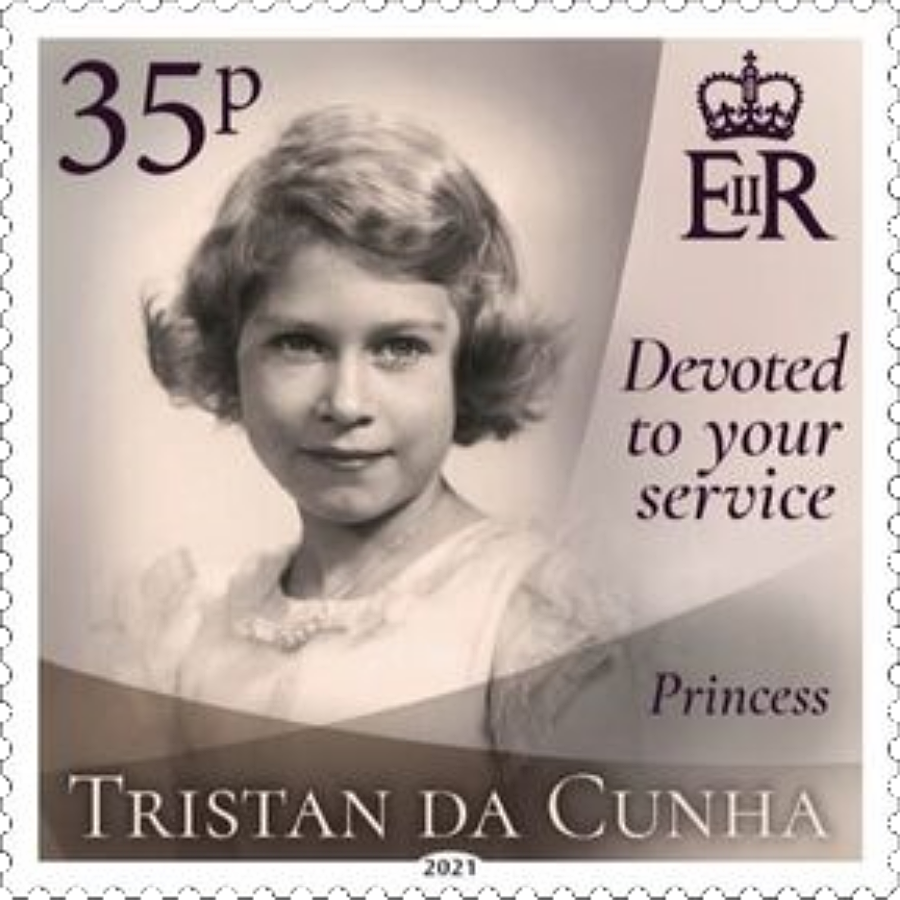 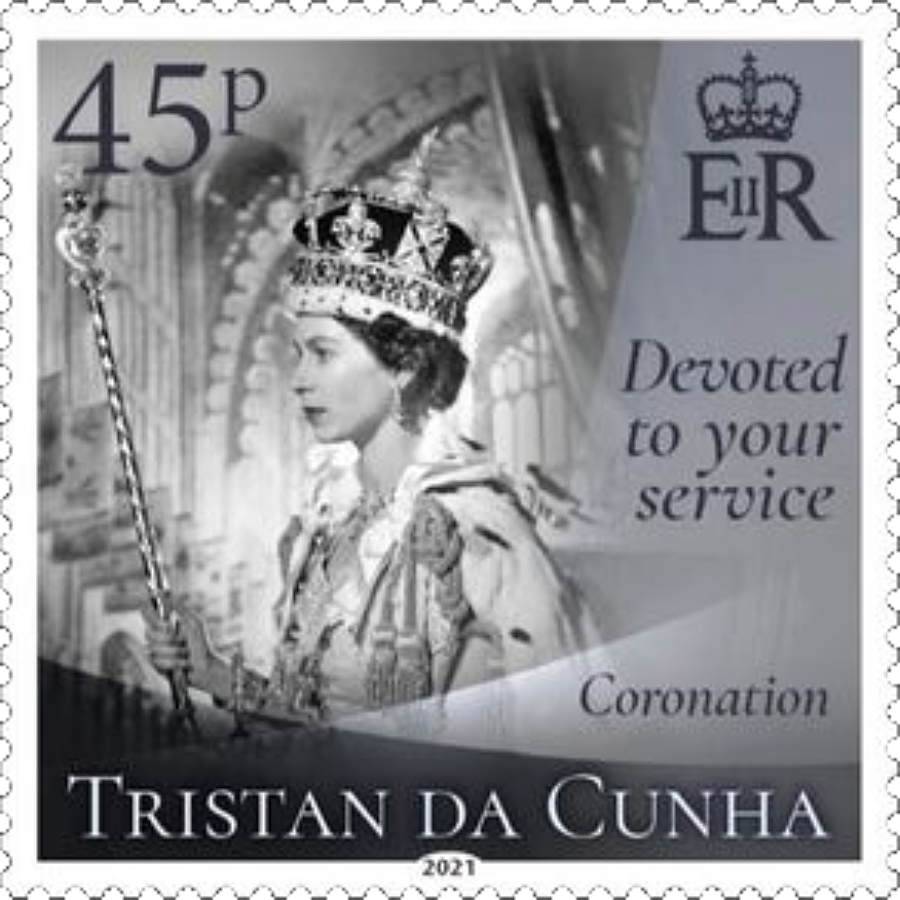 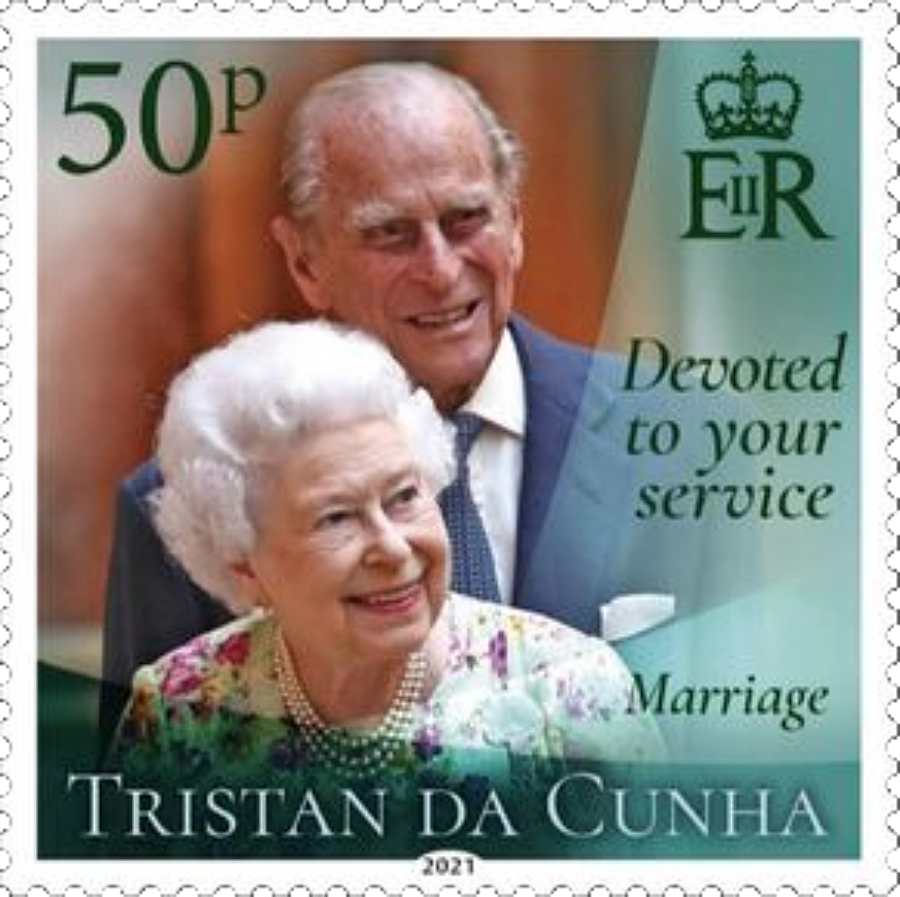 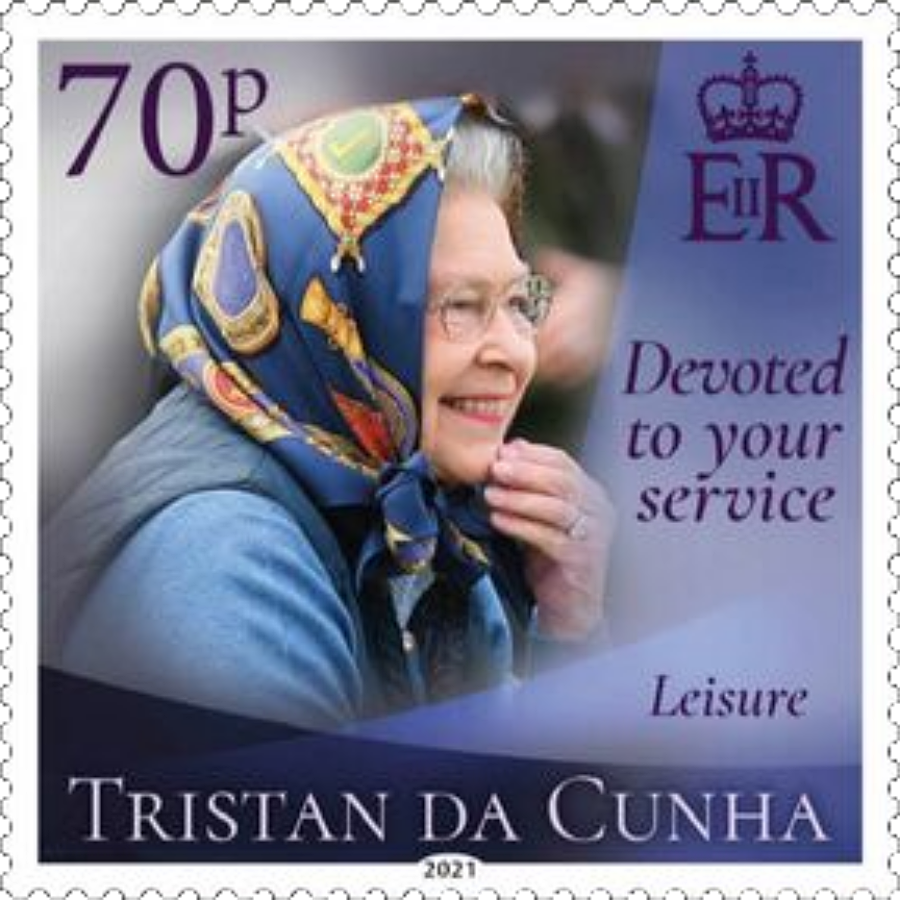 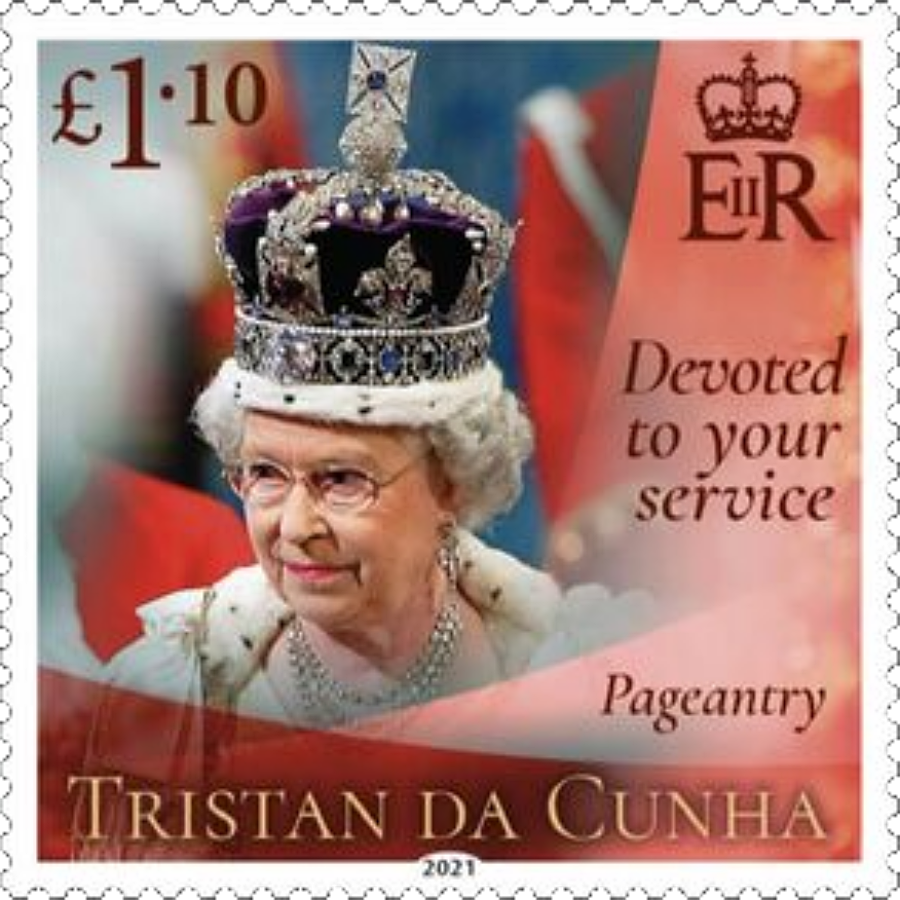 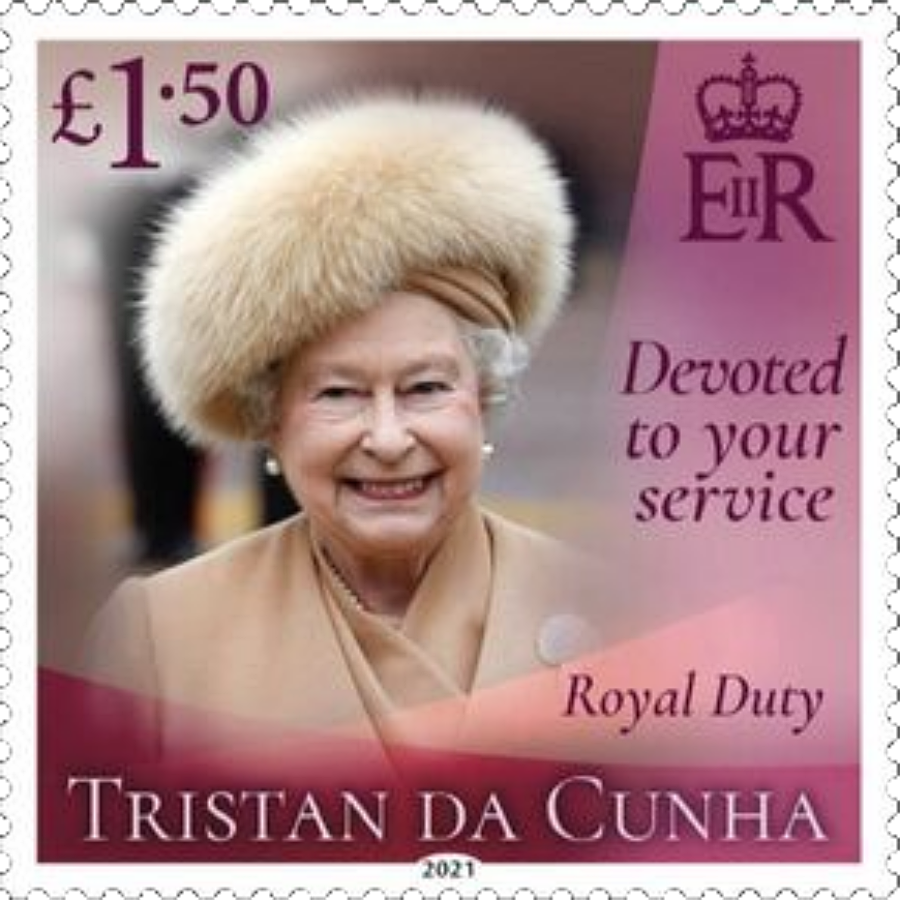 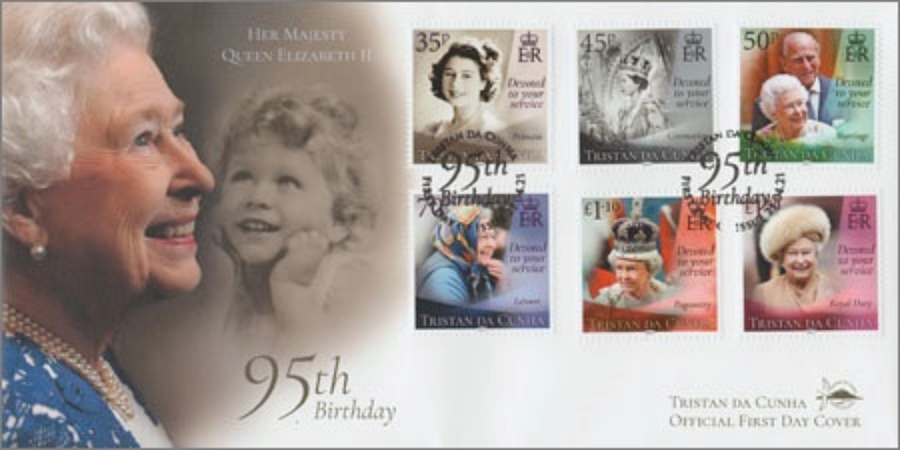 The Tristan da Cunha Post Office takes great pleasure in releasing a set of six stamps in celebration of The Queen’s 95th birthday.

The stamps will be released on Her Majesty’s actual birthday, 21st April. Each of the stamps depict key aspects of Her Majesty’s life, from a young Princess, to her Coronation and Marriage as well as managing to enjoy some Leisure time and Pageantry, out and about fulfilling her Royal Duties.

On her twenty-first birthday, 21st April 1947, Princess Elizabeth was with her parents and younger sister, Princess Margaret, on a tour of South Africa. In a speech broadcast on the radio from Cape Town, the Princess dedicated her life to the service of the Commonwealth. The theme of the stamp issue, “Devoted to your service”, is taken from that speech: “I declare before you all that my whole life whether it be long or short shall be devoted to your service and the service of our great imperial family to which we all belong.”

The following are depicted:

35p – Princess – A beautiful portrait by Cecil Beaton of the Princess Elizabeth at Buckingham Palace, 1946. (Photo by PA Archive/PA Images).

45p – Coronation – A portrait of Queen Elizabeth II wearing the Imperial State Crown, after her Coronation 2 June 1953 in Westminster Abbey. (Photo by Sport and General/Barratts/EMPICS Archive via PA Images).

50p – Marriage – The Queen and Prince Philip, Duke of Edinburgh stand next to a display of Spanish items from the Royal Collection during the state visit of Spanish King Felipe VI and Queen Letizia at Buckingham Palace in central London on July 12, 2017. (Photo by Neil Hall/Pool/AFP via Getty Images).

£1.10 – Pageantry – Queen Elizabeth II, wearing the Imperial Crown, walks in procession through The Royal Gallery on her way to give her speech during the ceremonial state opening of Parliament in London 13 November 2002. (Photo by Adrian Dennis/AFP WPA Pool/AFP via Getty Images).

£1.50 – Royal Duty – Queen Elizabeth II arrives to unveil a memorial to Queen Elizabeth The Queen Mother on the Mall, in central London, on February 24, 2009. Prince Charles paid a heartfelt tribute to his “darling grandmother” as the Queen unveiled the national memorial. (Photo by Kirsty Wigglesworth/Pool/AFP via Getty Images).

FDC – The FDC features two images of Her Majesty; a contemporary picture of the Queen who is fondly known throughout the world and a beautiful portrait, circa 1929, of the young Princess Elizabeth before it was realized that she would be acceding to the throne. (Photos via Getty Images). 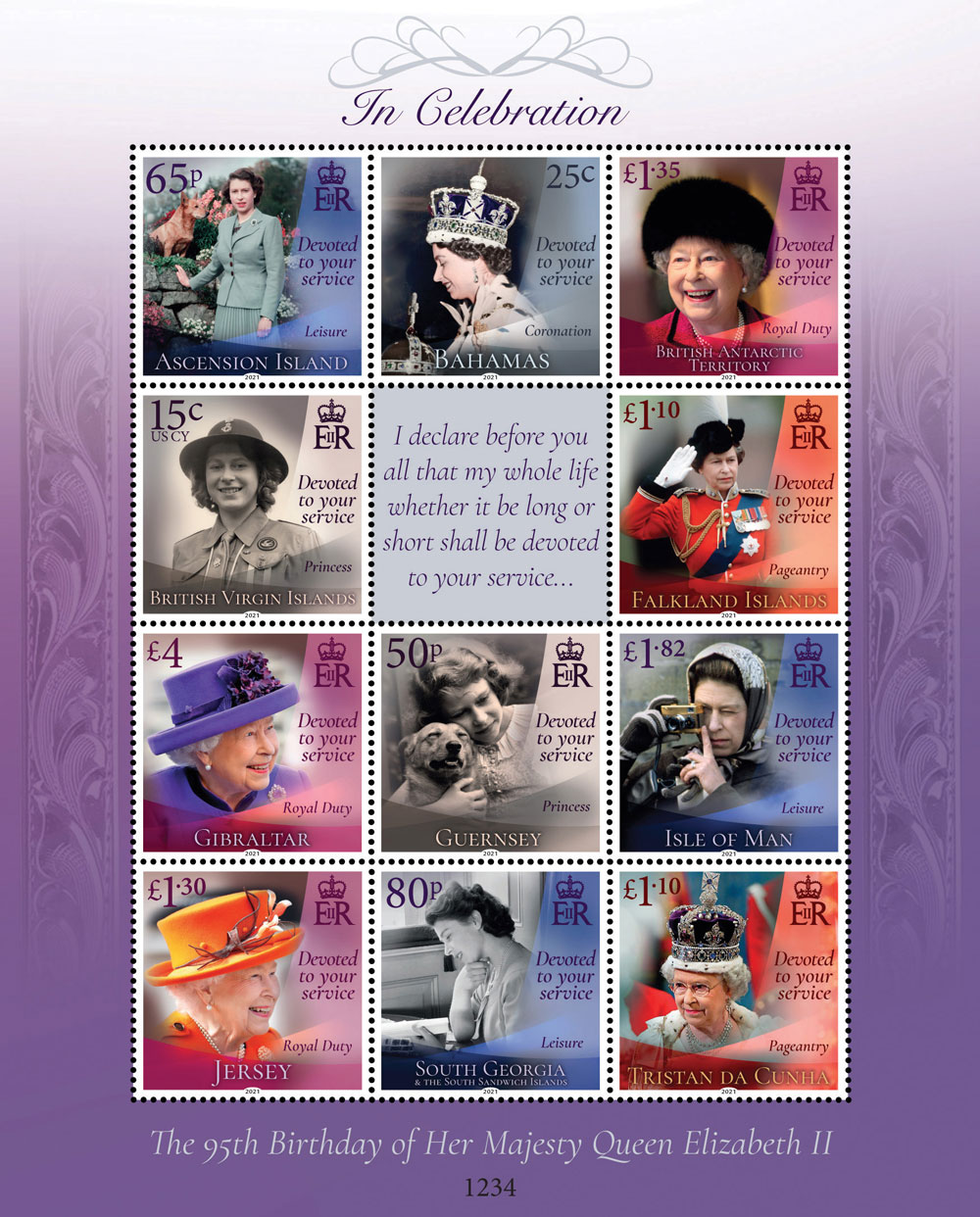 This special issue, Devoted to your Service, is a collaboration between 11 postal administrations, which sees four Crown Dependencies – Guernsey, Jersey, the Isle of Man and Gibraltar – become part of a co-ordinated collection undertaken by Creative Direction (Worldwide) Ltd, which manages the stamp design and print programme for several overseas territories – the Falkland Islands, British Virgin Islands, British Antarctic Territory, Ascension Island, South Georgia and South Sandwich Islands, Tristan da Cunha and the Commonwealth of The Bahamas.

Each of the Crown Dependencies and overseas territories have produced commemorative stamps bearing the same titles – Princess, Coronation, Marriage, Leisure, Pageantry and Royal Duty – although each feature different images of Her Majesty on these themes.  A joint sheetlet has been issued which includes one stamp from each of the 11 postal administrations.

The production of these special stamps and related products has been undertaken by respected specialist stamp printers, commissioned on behalf of the Post Offices by Tim Underwood of Creative Direction (Worldwide) Ltd, who has been exclusively involved with the commissioning of design and production of stamps for over 30 years.

Elizabeth was the first child of the Duke and Duchess of York (later King George VI and Queen Elizabeth). Her father ascended the throne on the abdication of his brother King Edward VIII in 1936, from which time she was the heir presumptive. She was educated privately at home and began to undertake public duties during the Second World War, serving in the Auxiliary Territorial Service. In 1947, she married Philip, Duke of Edinburgh, a former prince of Greece and Denmark, with whom she had four children: Charles, Prince of Wales; Anne, Princess Royal; Prince Andrew, Duke of York; and Prince Edward, Earl of Wessex.

When her father died in February 1952, Elizabeth – then 25 years old – became head of the Commonwealth and queen regnant of seven independent Commonwealth countries: the United Kingdom, Canada, Australia, New Zealand, South Africa, Pakistan, and Ceylon. She has reigned as a constitutional monarch through major political changes, such as devolution in the United Kingdom, accession of the United Kingdom to the European Communities, Brexit, Canadian patriation, and the decolonization of Africa. Between 1956 and 1992, the number of her realms varied as territories gained independence, and as realms, including South Africa, Pakistan, and Ceylon (renamed Sri Lanka), became republics.

Her many historic visits and meetings include a state visit to the Republic of Ireland and visits to or from five popes. Significant events have included her coronation in 1953 and the celebrations of her Silver, Golden, and Diamond Jubilees in 1977, 2002, and 2012, respectively. In 2017, she became the first British monarch to reach a Sapphire Jubilee. On 9 April 2021, after 73 years of marriage, her husband Prince Philip died at the age of 99.

Elizabeth is the longest-lived and longest-reigning British monarch, the longest-serving female head of state in world history, the world’s oldest living monarch, longest-reigning current monarch, and oldest and longest-serving current head of state. Elizabeth has occasionally faced republican sentiments and press criticism of the royal family, in particular after the breakdown of her children’s marriages, her annus horribilis in 1992, and the death in 1997 of her former daughter-in-law Diana, Princess of Wales. However, support for the monarchy in the United Kingdom has been and remains consistently high, as does her personal popularity.

Despite the COVID-19 pandemic in the United Kingdom, the Queen took part in the 2021 State Opening of Parliament.

The Queen’s Platinum Jubilee is planned for 2022, and she would surpass Louis XIV of France as the longest-reigning monarch of a sovereign state in verified world history on 27 May 2024. She does not intend to abdicate, though Prince Charles began to take on more of her duties when she entered her 90s and began carrying out fewer public engagements. On 20 April 2018, the government leaders of the Commonwealth of Nations announced that she will be succeeded by Charles as head of the Commonwealth. The Queen stated it was her “sincere wish” that Charles would follow her in the role. Plans for the Queen’s own death and funeral, codenamed Operation London Bridge, have been prepared by British government and media organizations since the 1960s.