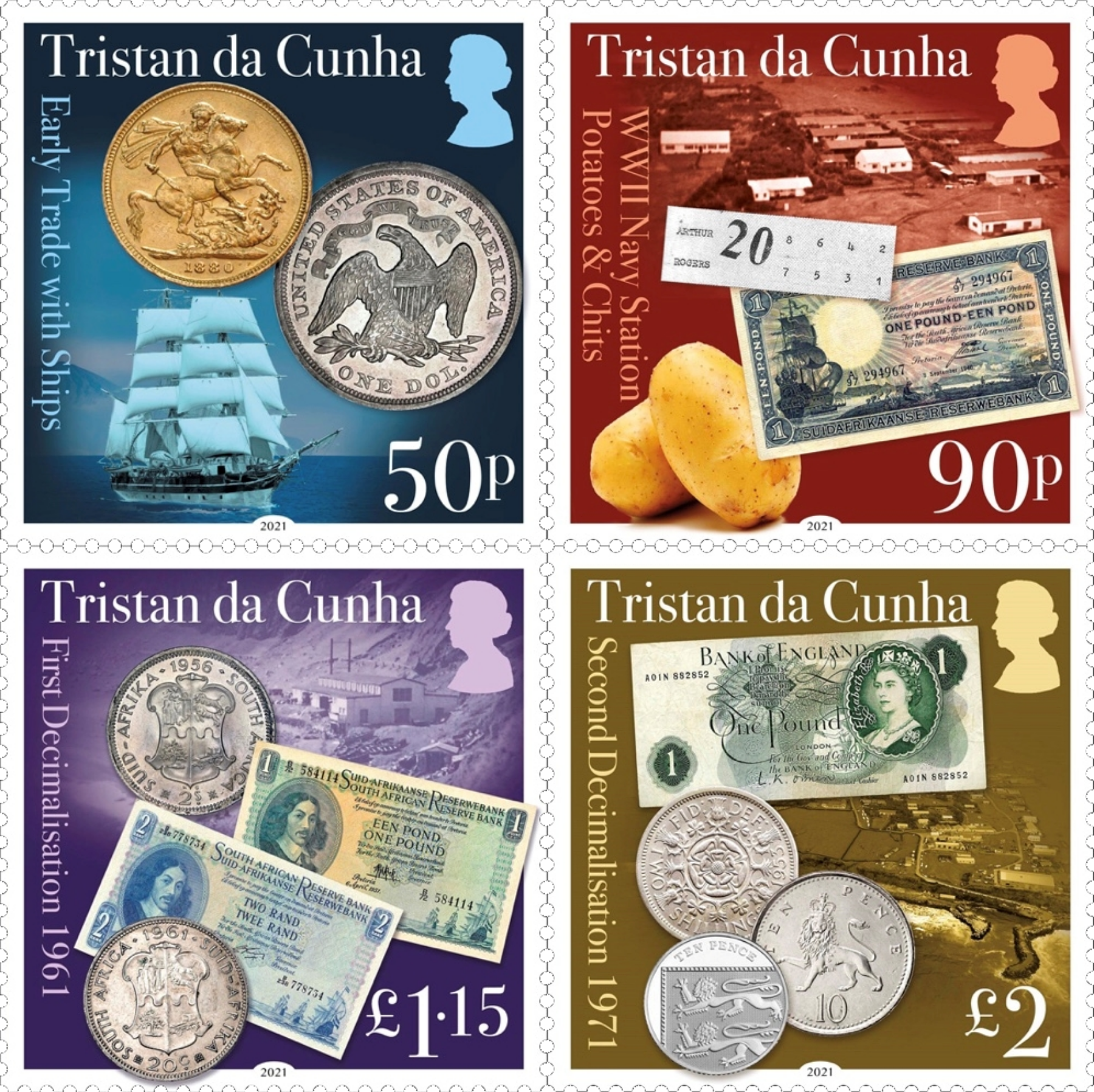 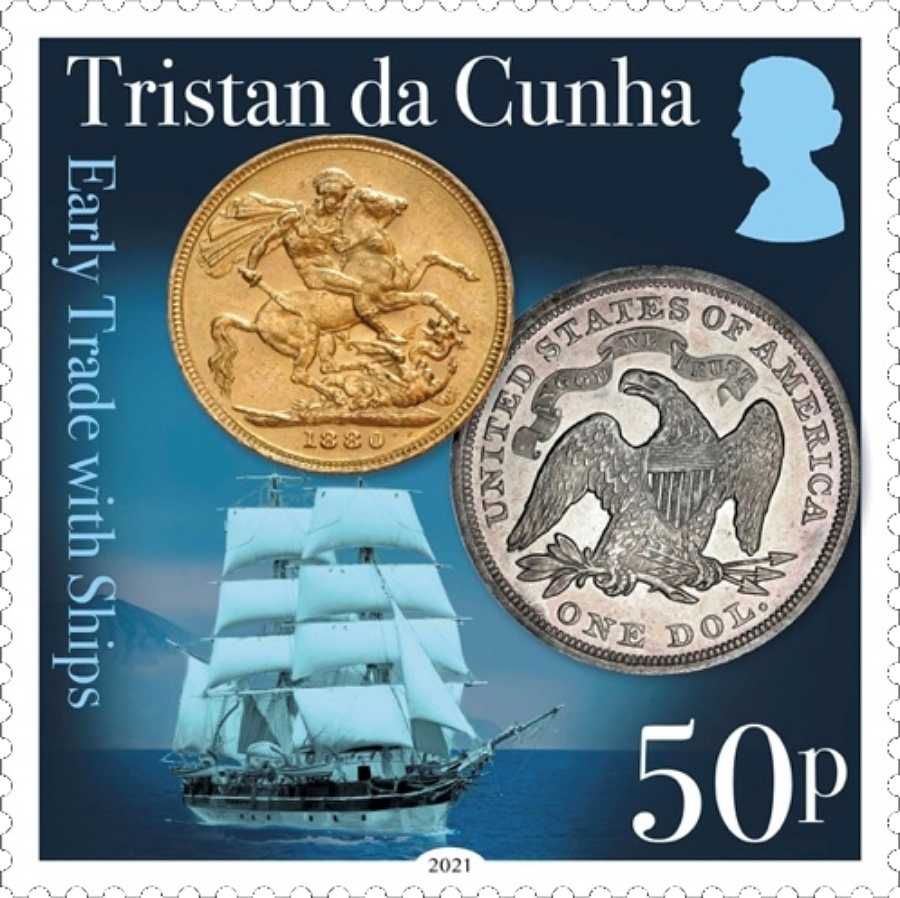 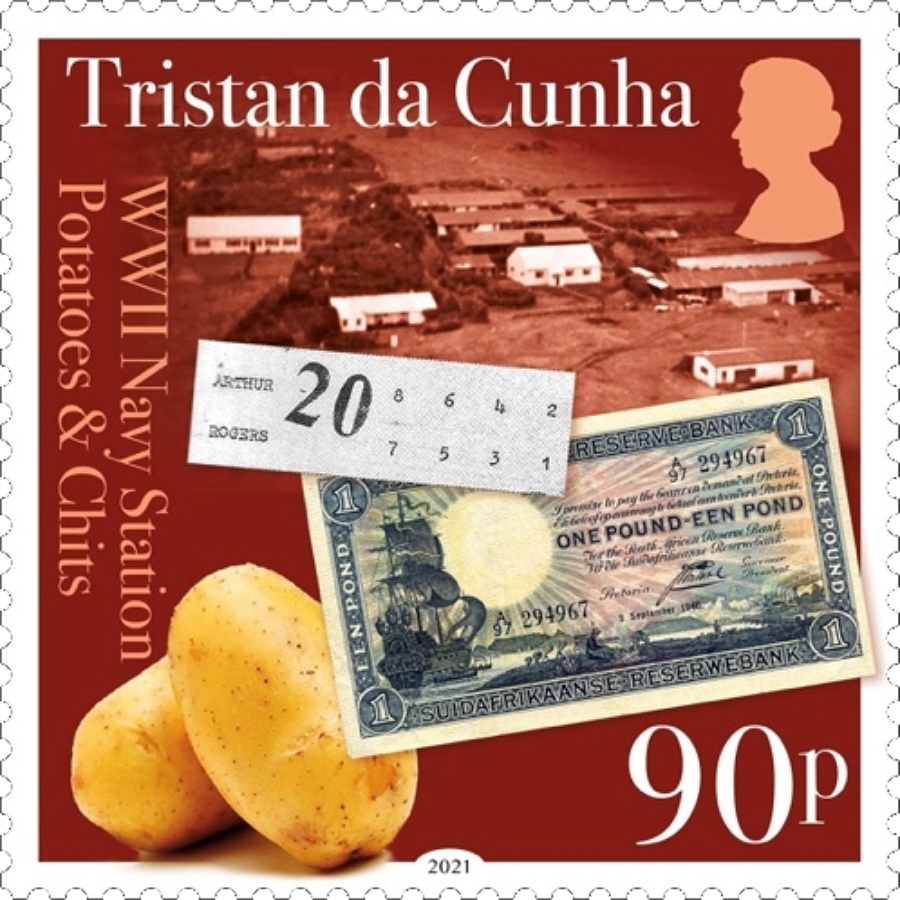 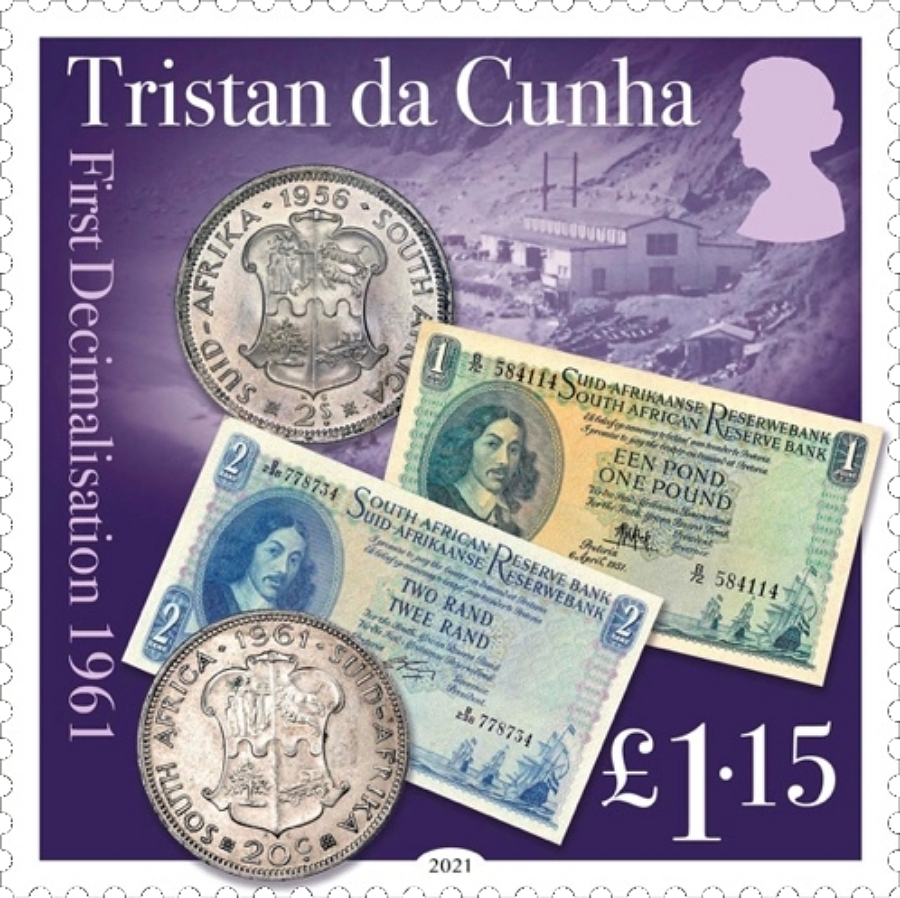 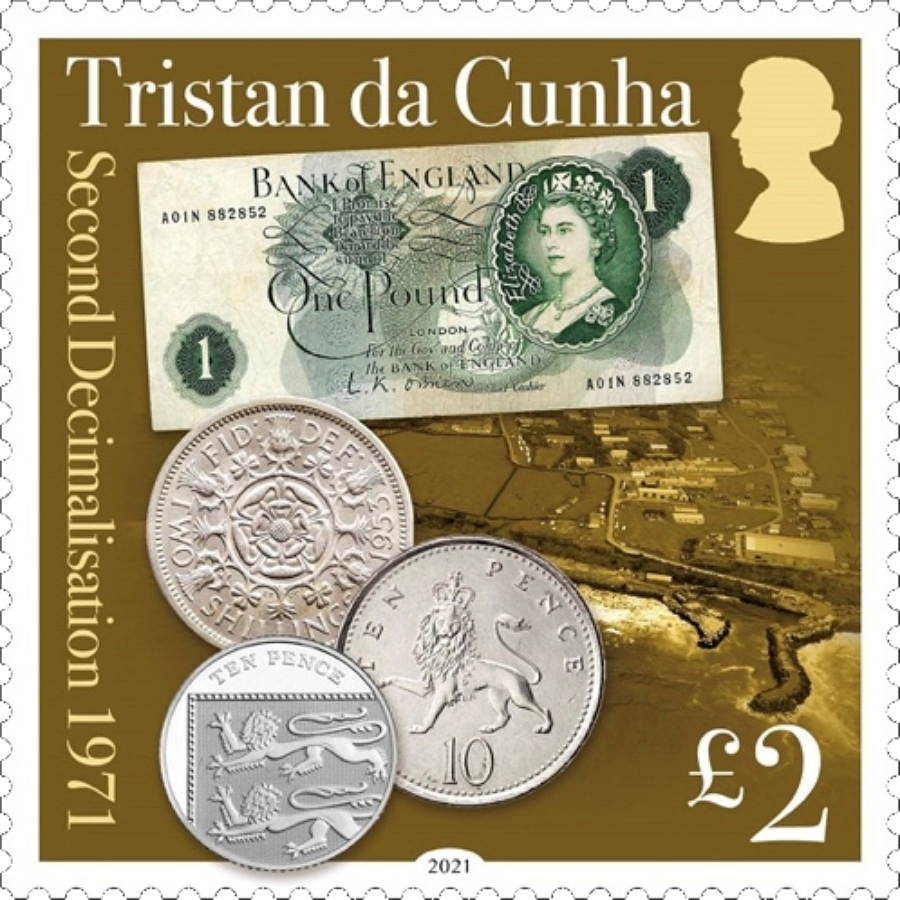 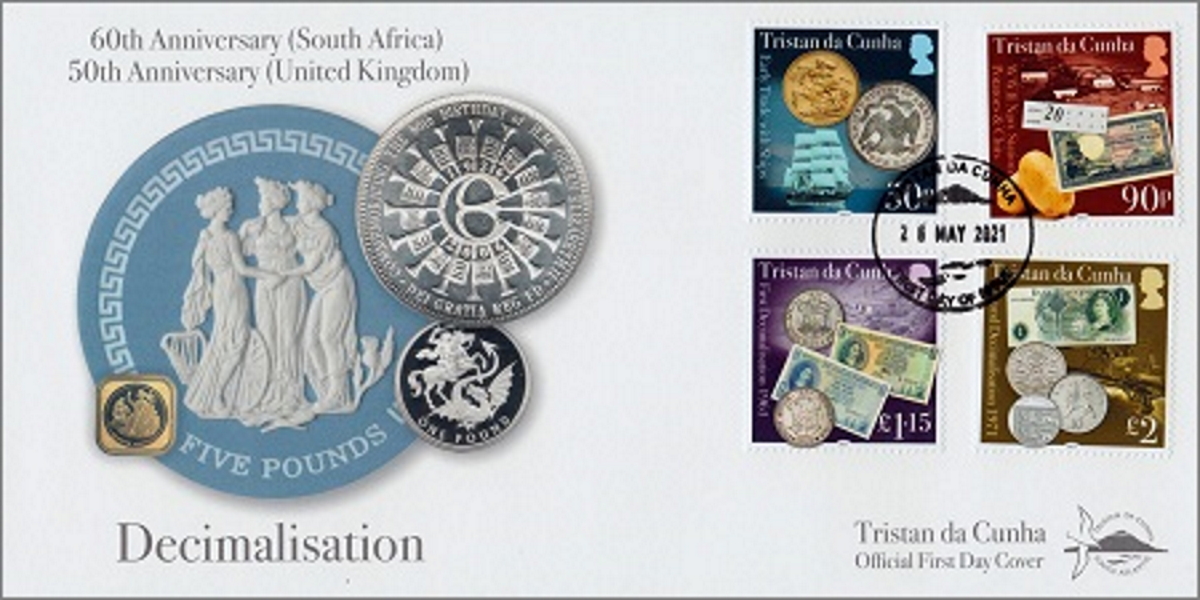 60th and 50th Anniversaries of Decimalisation

If it was not already unique enough, Tristan da Cunha is the only territory to have dedecimalised its currency, although this move was forced on it by circumstances rather than being a deliberate choice. And yet, for nearly a hundred years, Tristanians used no money at all.

The aim of Tristan’s original settlers in the 1810s was to make money by sealing and supplying passing vessels with fresh water and provisions. This trade involved some barter and whatever currencies ships’ captains had to hand – mainly British pounds and US dollars.

Trade thrived while southbound American whalers and eastbound British sailing clippers called at the island, but once the whaling grounds were fished out and steamers could take a shortcut through the Suez Canal the business failed. Although some cash changed hands, barter became the main form of commence, and imported goods were often in short supply.

There was virtually no money on the island by the end of the 19th century. Tristan became reliant in the early 20th century on supplies and materials sent by well-wishers, including Douglas & Sir Irving Gane’s Tristan da Cunha Fund. The current ‘governor’ or SPG missionary ensured that donations were distributed fairly.

Tristanians had no use for money among themselves. Each family was expected to grow, rear, fish and hunt for its own food. If they did not or could not, no one would be allowed to starve, but food could not be bought and would not be sold. Whenever labour was required, for instance for building or thatching, the beneficiary simply provided the gang with three meals during the work day, which still happens.

When the Royal Navy station was established on the island in 1942, they needed the help of the local population with construction and housekeeping. After some teething troubles, a system of payment for work using typed paper chits to the value of one shilling (1/-) and two shillings (2/-) was set up at the first Island Council meeting on 2nd December 1943, as was a Savings Bank. Chits could be exchanged for stores, materials, shoes, boots and timber at the station canteen. Islanders could also use South African or British cash, which were interchangeable, as they were both sterling currencies. A proper supply of cash did not reach Tristan until 1944, but as the first Colonial Office Administrator Hugh Elliott later discovered,

“…even the George IV crown piece and the ancient Dutch and American cents returned to circulation from the toe of their respective stockings.”

So unfamiliar was the concept of money, lectures were held for the islanders on “currency” at the school.

The potato as a unit of currency came to represent Tristan’s barter economy during World War II, largely thanks to Allan Crawford. He was an old friend of Tristan, who was brought in to liaise with the islanders, and who published the first Tristan Times on 6th March 1943. This was a single typed foolscap sheet of world and island news. In the absence of cash, the Tristan Times bore the unusual price “3 cigarettes or 4 big potatoes”.

There was still precious little cash around in the late 1940s, when Allan Crawford helped the island petition for the introduction of postage stamps. He famously printed promotional essays priced in potatoes and pence – 4 potatoes to the penny. One cannot help but imagine people wandering around with pockets stuffed with potatoes as loose change!

Apparently, islanders abandoned money after the Navy left in 1947, although savings remained in the savings bank. However, money returned to the island with the inauguration of the crawfish industry. When HMSAS Transvaal carried South African factory personnel to Tristan in 1949, it also brought bags of South African money in the ship’s safe – the first appreciable amount of cash to be introduced to the island.

Like today, the work was seasonal and not a full time occupation, but with regular supply ships and the opening of the store, there was a range of foods, household goods and material to spend money on.

At some point in the 1950s, South African money was withdrawn, leaving just British currency. However, the Cape Town-based fishing company’s finances and most purchases for the island store were still in South African currency.

South Africa decided to decimalise its currency in 1961, the Rand of 100 cents being pegged at 2 Rand to the Pound Sterling. It was therefore decided to align Tristan’s currency to South Africa for ease of administration. Administrator Peter Day reissued Tristan’s postage stamps on 15th April 1961, reprinted with the values in Rand and cents, while his successor Peter Wheeler oversaw the replacement of British pounds, shillings and pence with 4,000 Rand in South African notes and coins. Wheeler led a briefing session in the Prince Philip Hall and remembered the islanders taking to the new system “like ducks to water”.

Tristan da Cunha’s brush with decimal currency only lasted a few months, because the volcanic eruption of October 1961 caused everyone to be evacuated to England and back to pounds, shillings and pence.

To complicate matters, South Africa left the British Commonwealth on 31st May 1961 because of Apartheid. The move to the Rand could therefore have become a problem for Tristan had the volcano not intervened. The political situation was unresolved in 1963 when the islanders returned to Tristan, so when they resettled, they continued using English money.

Peter Day says that when he returned as Administrator during resettlement in April 1963, he carried ashore £2,000 in cash, which kept the island going for the next two years!

The United Kingdom subsequently decimalised the British pound in 1971 – 100 New Pence to the pound. Tristan da Cunha therefore went through a second decimalisation exercise at the same time, using British coins and notes. The existing stamps were overprinted and re-issued with new decimal values.

Although Tristan da Cunha is part of the British Overseas Territory of St Helena, Ascension and Tristan da Cunha, it does not use St Helena notes and coins, but continues to use English currency. The savings bank still operates, and international banking is done through Crown Agents. There are no credit or debit card facilities on Tristan, because the customer base is too small for this to be viable.

Islanders still have little use for money among themselves, although nowadays islanders will sell beef to each other when an animal is slaughtered, and crisps, eggs, vegetables and meat as well as cooked food are sold, mainly in the shop and pub.

While Tristan does not issue its own coins for daily use, it is allowed to issue commemorative coins for collectors and investors. A steady stream of issues are produced and marketed under contract with The Commonwealth Mint, making a significant contribution to the island’s revenue. These coins are mostly gold and silver, and with some occasional exceptional pieces such as the Wedgwood Jasperware £5 coin issued in 2018, and the dome shaped Moon coin issued in 2019. All the coins are legal tender on the island; although as limited edition commemorative coins, their face value is lower than their bullion value or their value to collectors. 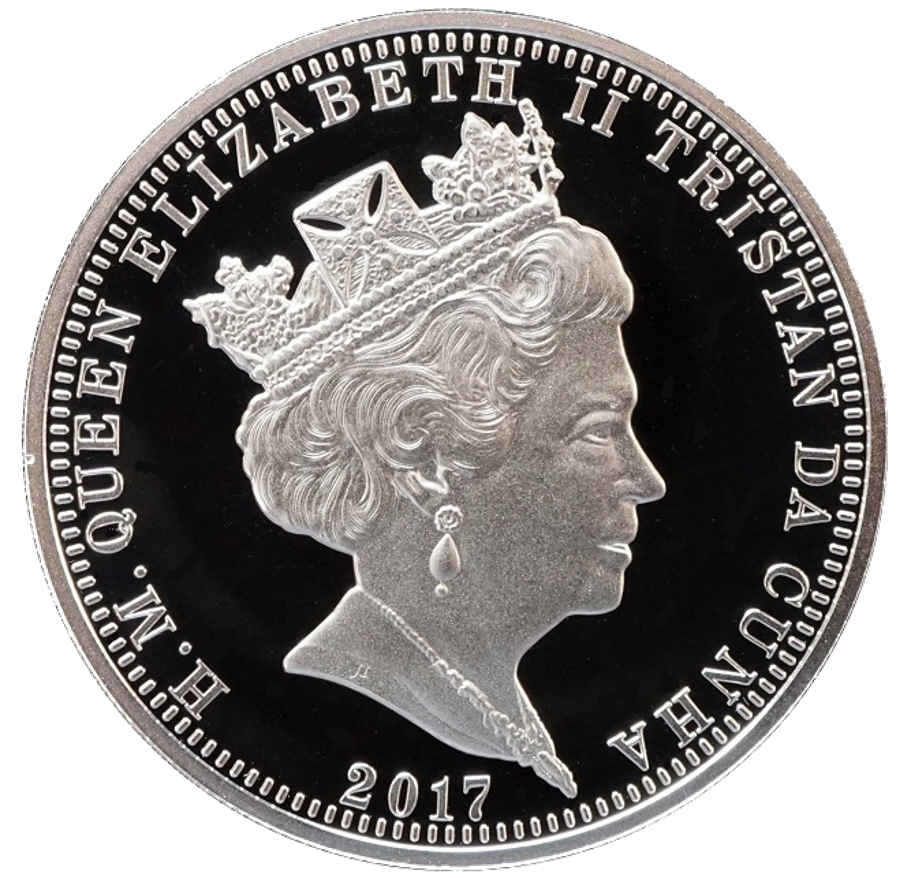 Description of the Stamps

50p – Early Trade with Ships – Featuring a British gold sovereign and a United States dollar of the 19th century period when the islanders sold goods and produce to passing ships, and bought (when they could not barter) necessaries such as tea, sugar and flour. The background shows a sailing ship off the coast of Tristan.

90p – WWII Navy Station: Potatoes & Chits – Featuring one of the typed two shilling chits, redeemable at the canteen, used to pay the Tristanians who helped to build the Royal Navy Station, and a South African pound note of the period. Potatoes could also be used to pay for some items. The background is an aerial view of station buildings taken after the war.

£1.15 – First Decimalisation 1961 – Featuring a South African pound note and two shilling piece as paid by the fishing company, and the corresponding two Rand note and 20 cent piece when decimalised currency was introduced in 1961. The background shows the first fishing factory at Big Beach, which was swept away by the volcano.

£2.00 – Second Decimalisation 1971 – Featuring a Bank of England pound note from the 1960s & 70s, along with a British two shilling piece and the corresponding ten new pence piece from when the UK decimalised in 1971 – also the smaller 10p piece used today. The background shows Calshot Harbour (built after the resettlement), the current fishing factory and the settlement’s “central business district”.

FDC – Collectible Tristan Coins – Featuring a selection of commemorative coins (to scale) issued for collectors and investors, including the Wedgwood Jasperware five pounds coin, a cupro-nickel five pound coin issued to commemorate the queen’s birthday in 2006, a gold square quarter sovereign issued in 2019, and a silver pound coin issued in 2020. 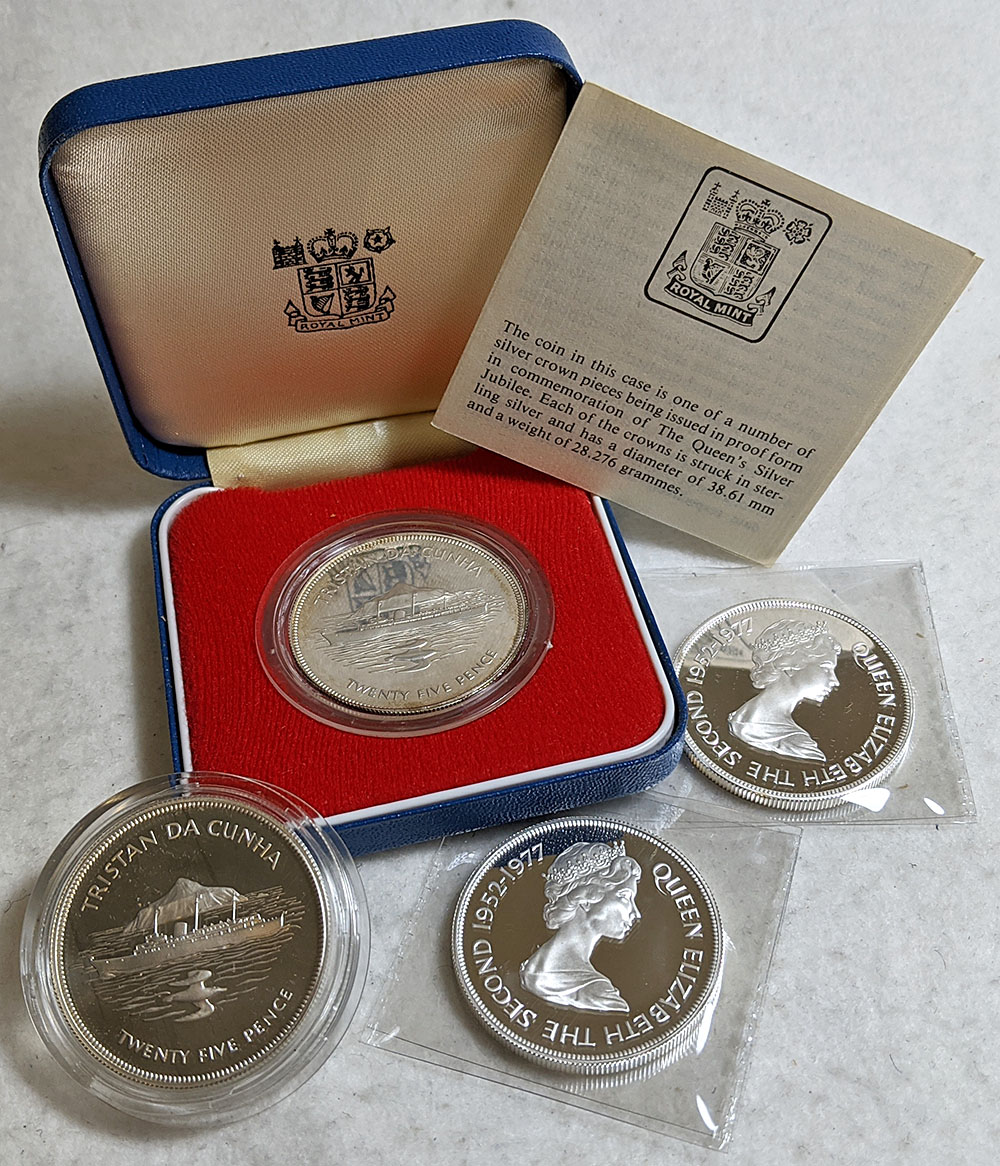