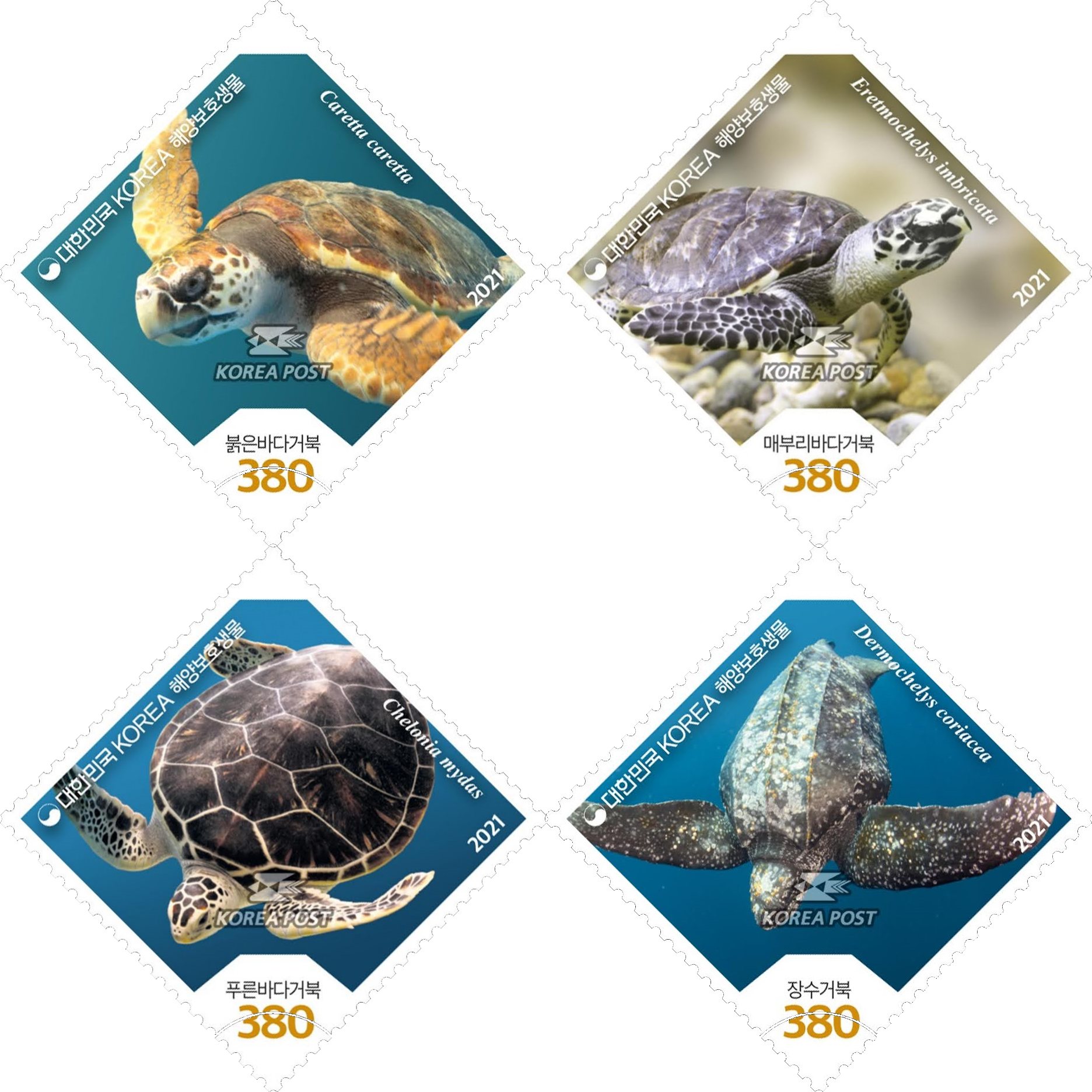 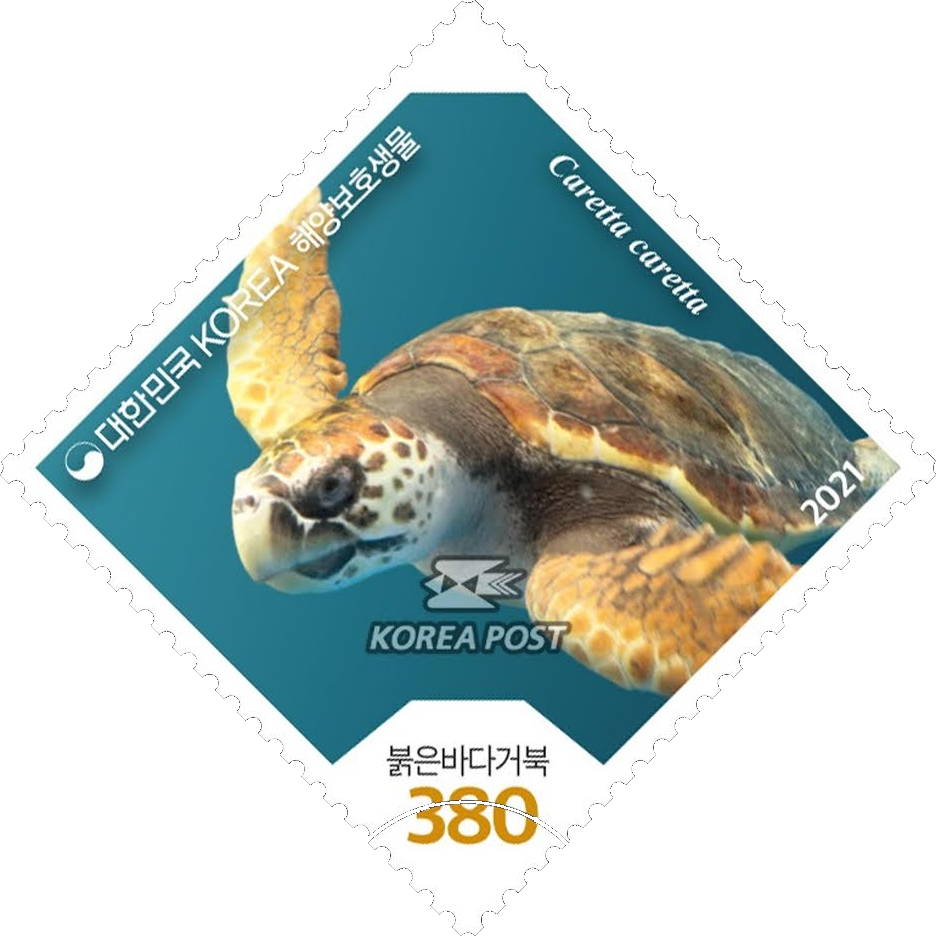 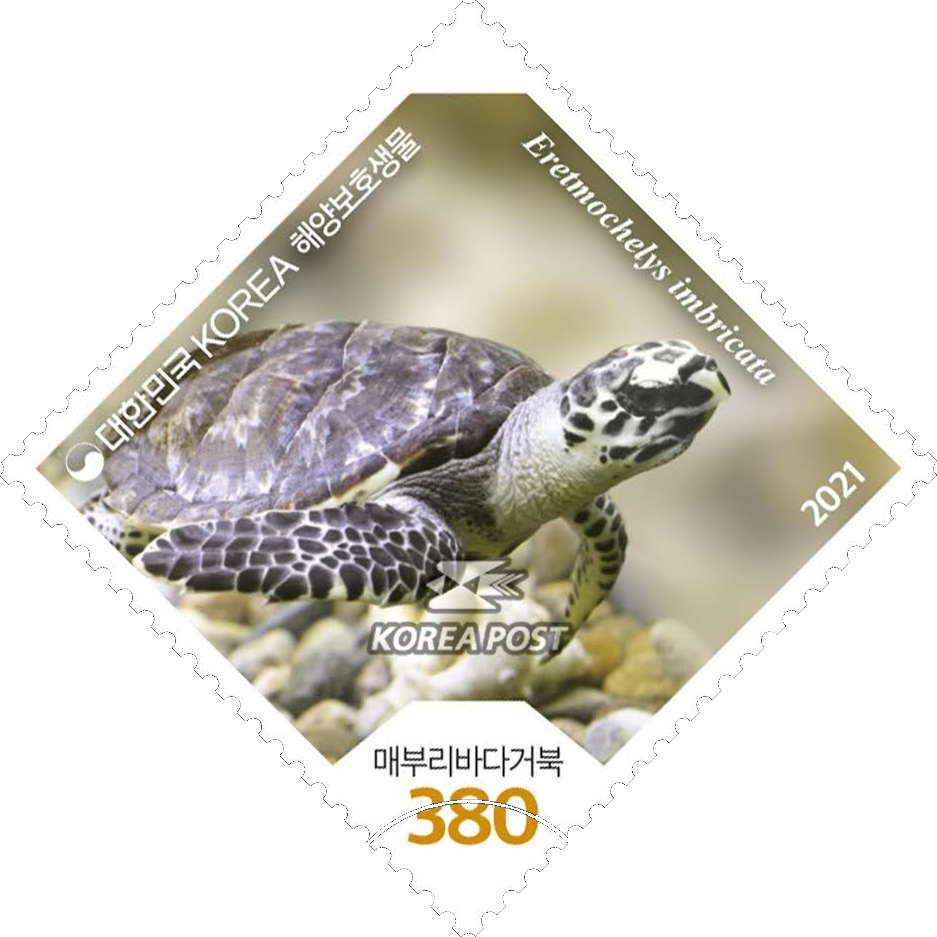 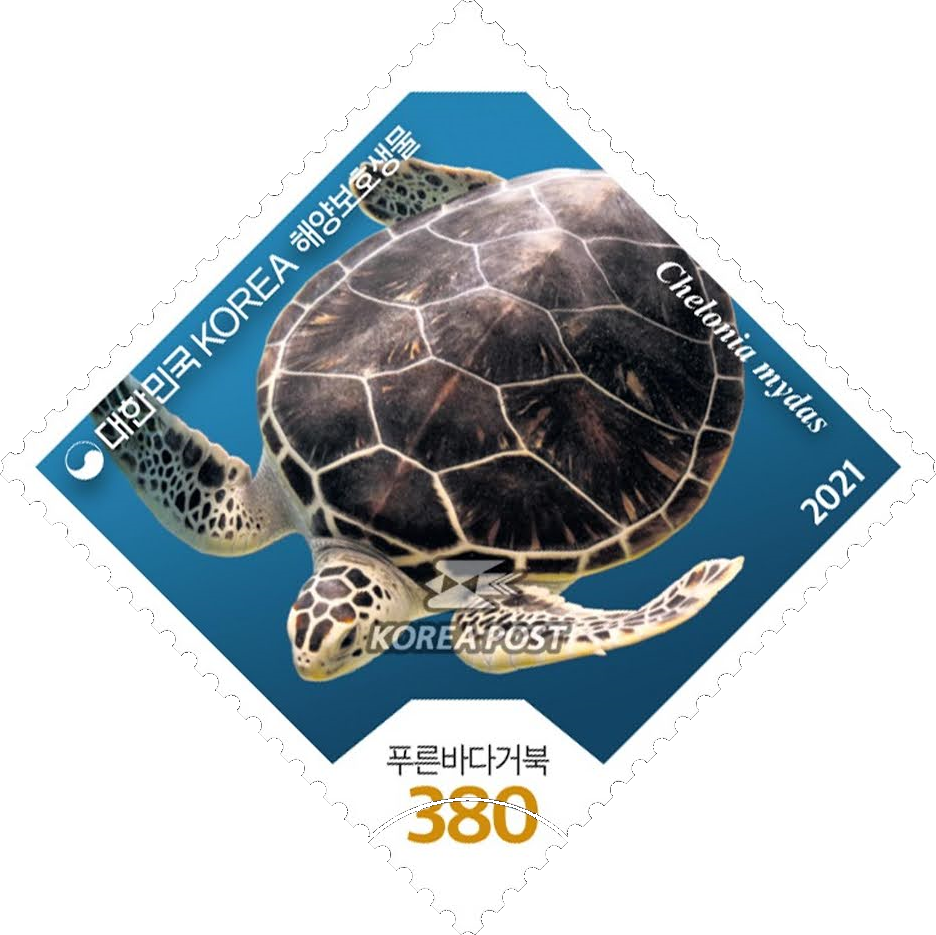 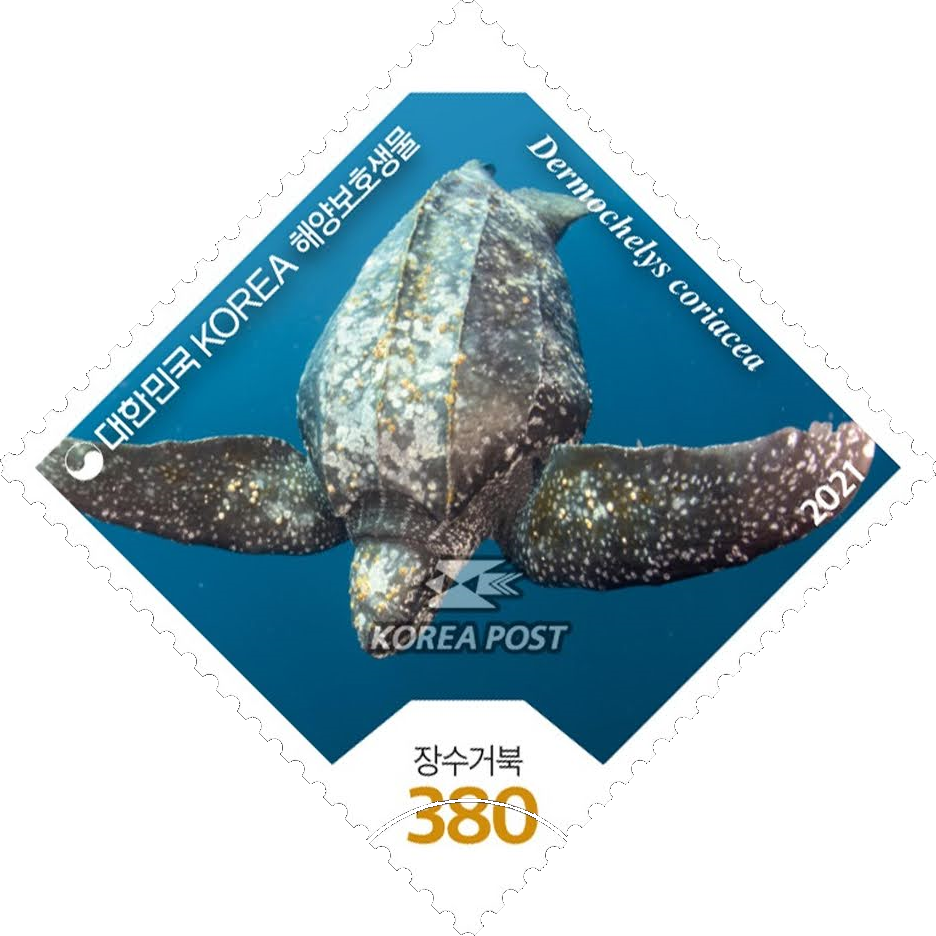 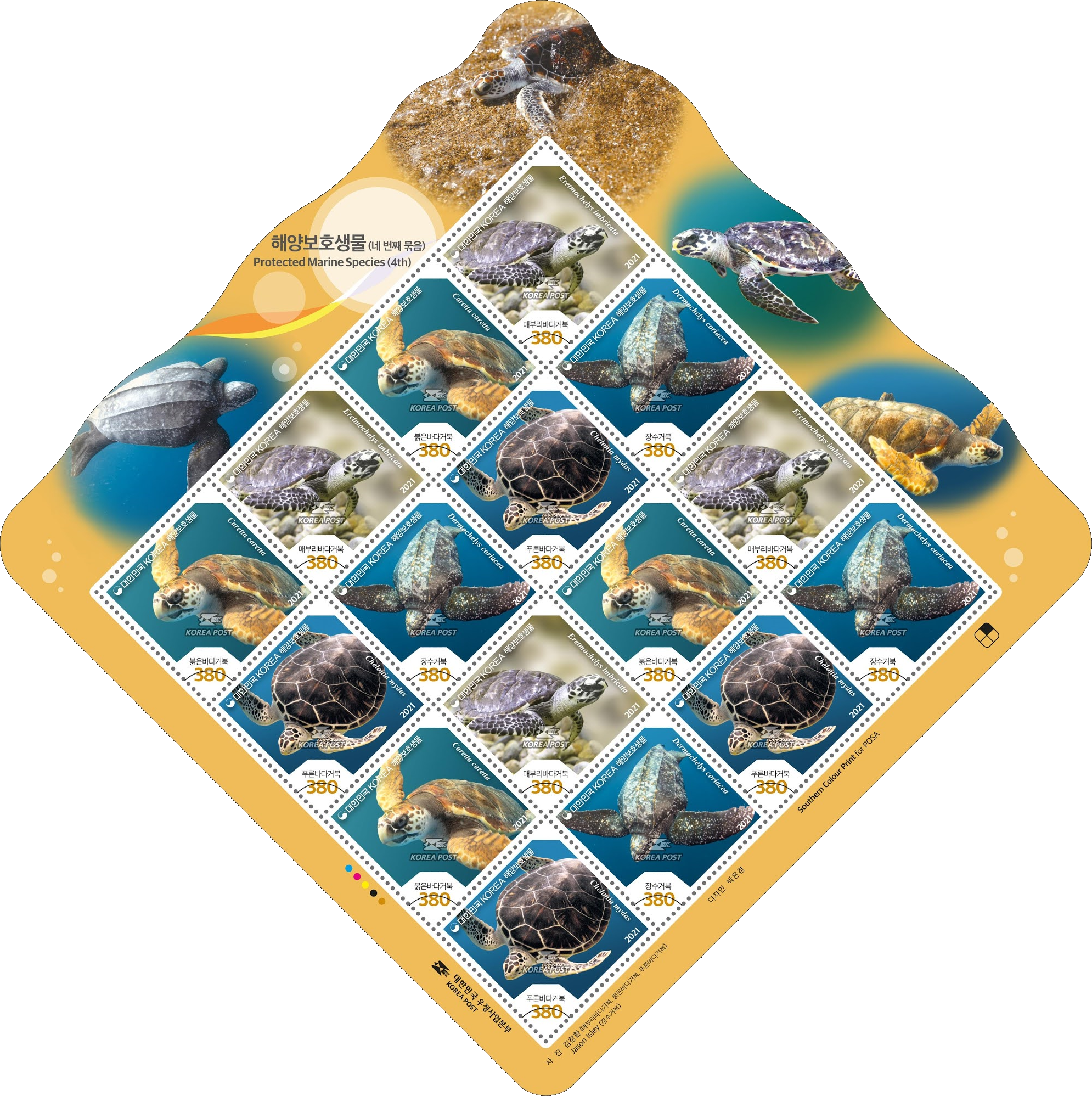 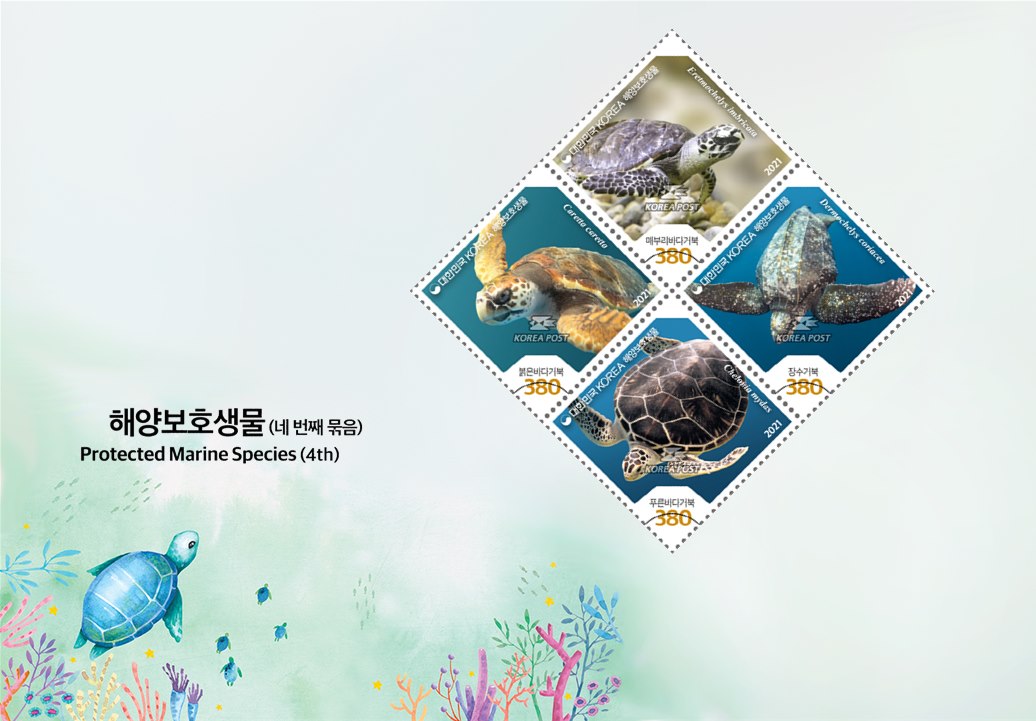 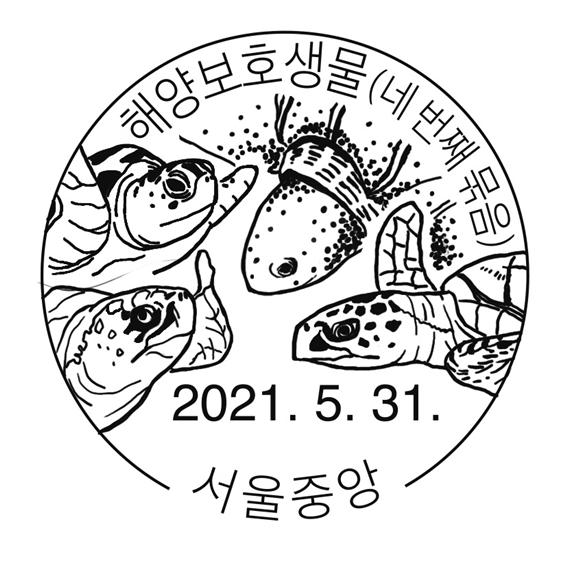 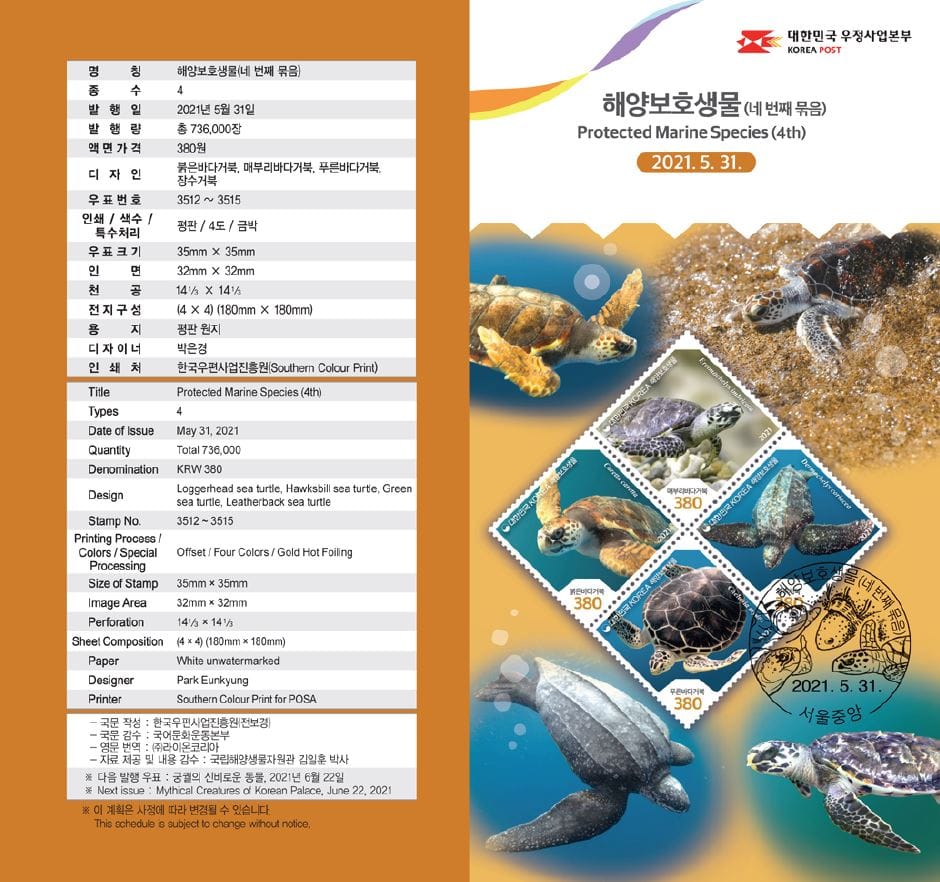 An estimated 80 percent of all life on Earth is found in the ocean, of which we actually know a mere 1 percent. At a time when marine species are more endangered than ever due to environmental pollution and climate change, the Korean government is managing 80 designated species that have greatly decreased in population or require special protection by the nation. Korea Post is issuing the commemorative stamp Protected Marine Species (4th) depicting four types of sea turtles designated as protected marine species in observance of National Oceans Day on May 31.

Sea turtles existed on Earth since 150 million years ago. However, their survival is being threatened by human activities, such as recent coastal development that destroyed their nesting sites, waste plastic that they have accidentally been feeding on, and waste nets that tangle around their bodies. The Korean government is protecting four types of sea turtles that can be found on the coasts of the Korean Peninsula, including hawksbill sea turtle (Eretmochelys imbricata), loggerhead sea turtle (Caretta caretta), leatherback sea turtle (Dermochelys coriacea), and the green sea turtle (Chelonia mydas).

Sea turtles are differentiated according to their appearance. The hawksbill turtle got its name for its pointy jaw that resembles a hawk`s bill, and has a sharp shell which the upper shell appears as if it is pressing down on the lower shell. It also has a wild pattern on the shell compared to other sea turtles. It is the most tropical species among sea turtles and enjoys feeding on sponges and soft corals. It inhabits in the waters of the Mid-Atlantic and Indo-Pacific, but there are just a few nesting sites. The first time the species was found in Korea was in 2009 in Jeju Island.

The loggerhead turtle is red in color and has a large head. It feeds on crabs and other crustacean when young, but becomes omnivorous when mature. However, it prefers a carnivorous diet than a vegetarian one. It can be found throughout Gangneung on the east coast of Korea all the way to the southwestern coast of Jeju Island. It migrates between May to August in search of nesting sites. The Pacific population that appear in Korea usually nest in the southern part of Japan, although there are isolated records of them nesting in Korea.

The leatherback sea turtle got its name as it looks like it is wearing a leathered suit of armor. It is an excellent diver that can go more than a thousand meters underwater for up to 90 minutes. It migrates the farthest distance among all sea turtles in the nesting season. It also has the broadest range of habitat, but is rarely seen in Korea. It can grow as long as three meters and weigh more than 900 kg, making it the largest existing reptile along with the Komodo dragon and saltwater crocodile.

The green sea turtle got its name for the fat inside the shell that has a greenish color. With a small head and a hard shell, its body is relatively flat compared to other sea turtles. It is omnivorous when young, but becomes vegetarian that feeds on seaweed and marine plants when mature. It is the only type of sea turtle that comes up on land to sunbathe to raise its body temperature. In Korea, it can be found in Jeju Island and the southern coast in summer.