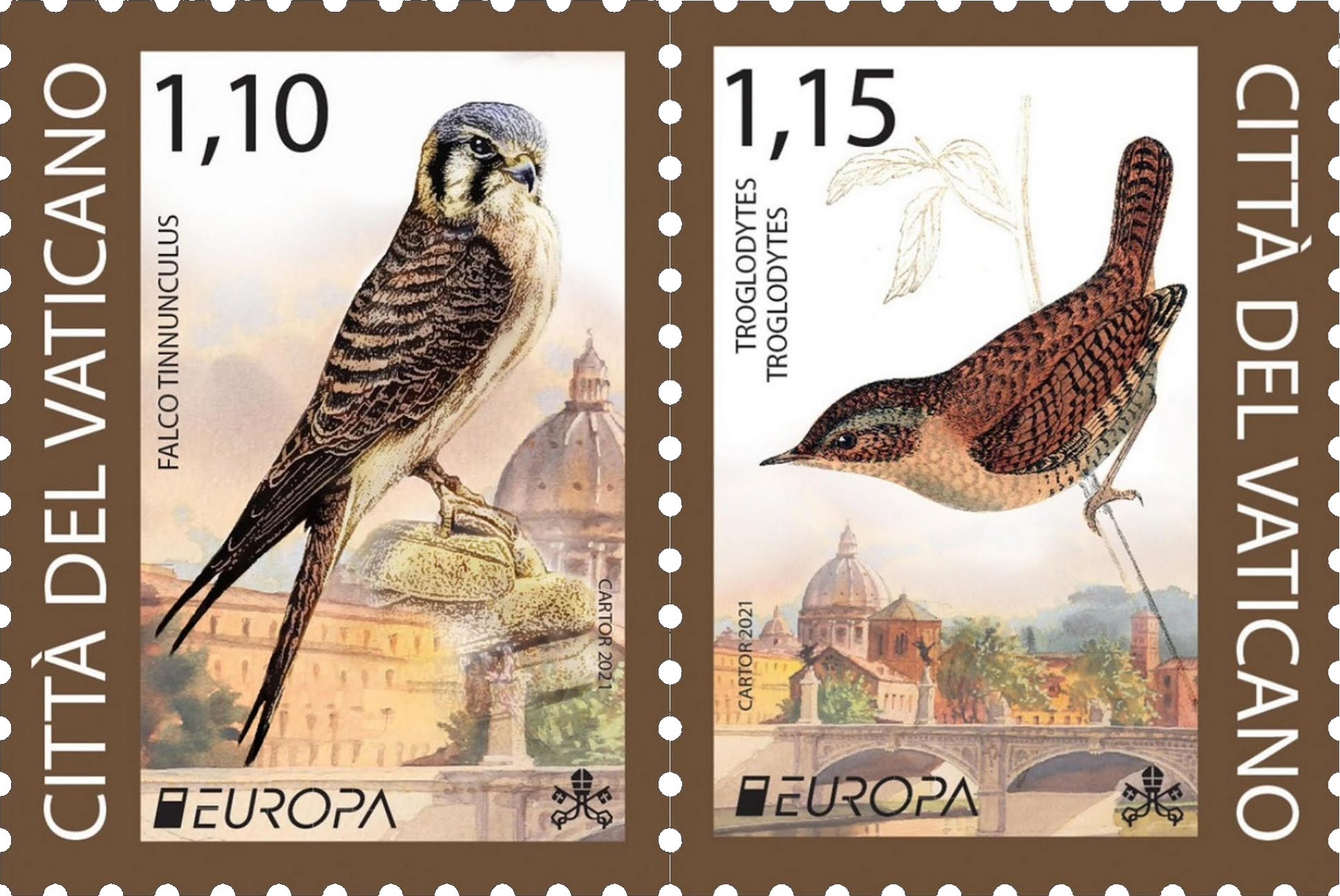 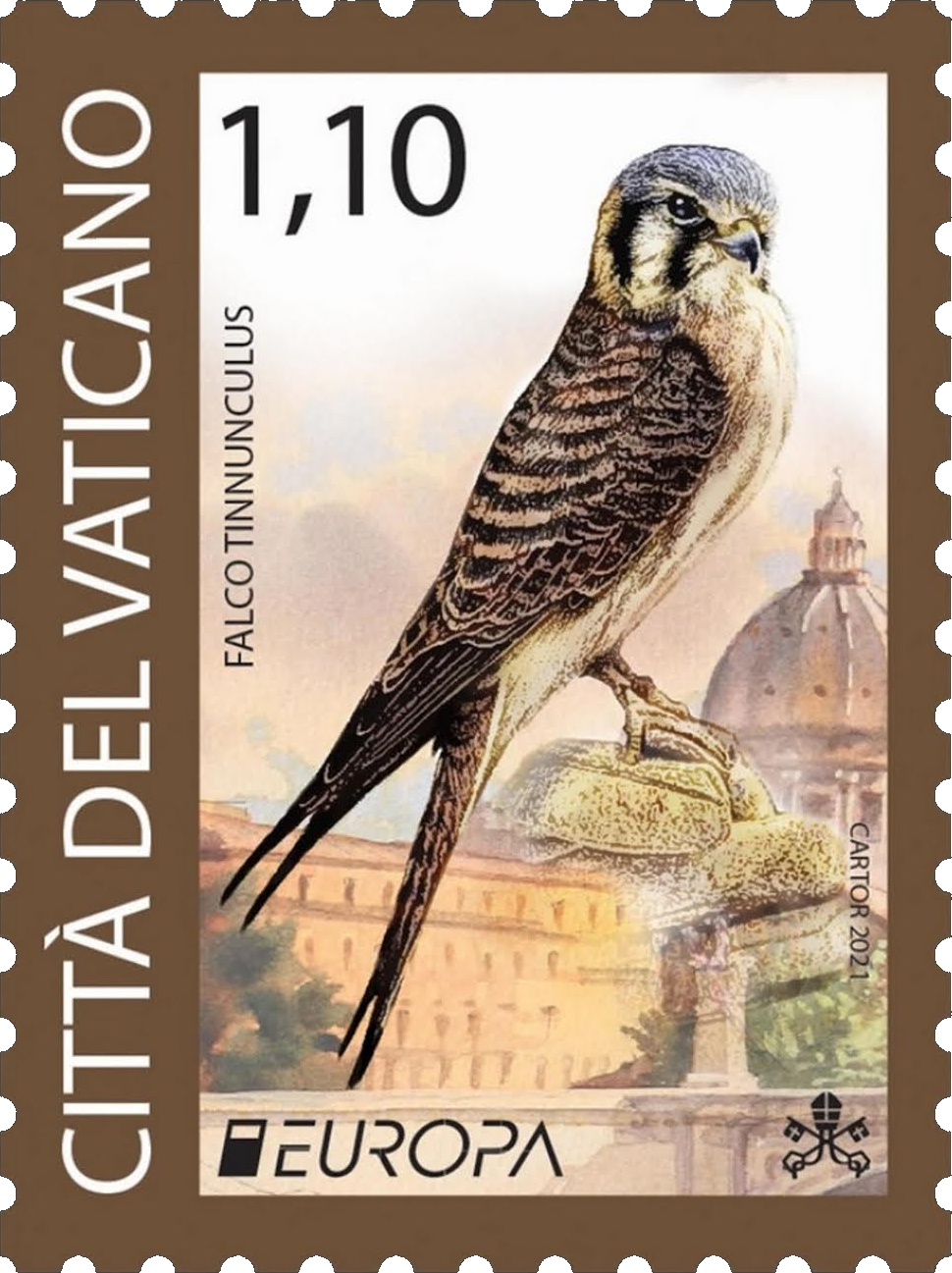 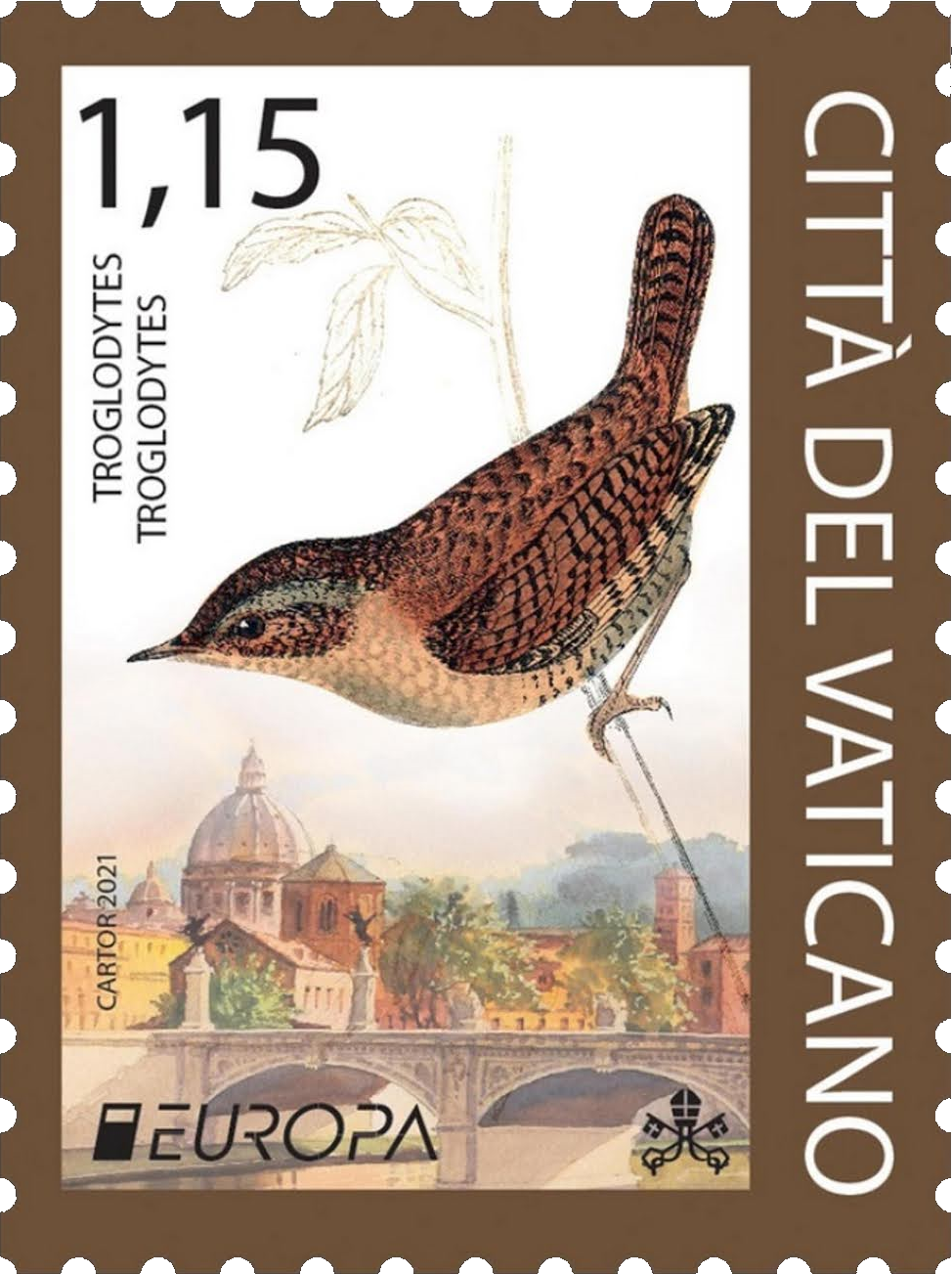 For the realization of the Europa 2021 series our attention has been focused on the Vatican Gardens, a natural habitat of 23 hectares located mainly on the Vatican hill, where the protection of the environment and the landscape is observed to safeguard local fauna and flora. Despite this, wild bird life is the most fragile class in this small ecosystem, as it is part of a larger environment, such as the city environment, where alien species have found a massive settlement at the expense of natives.

Among these the Eurasian wren (Troglodytes troglodytes) is difficult to detect in the wooded area of the Vatican Gardens, where it is kept as if in a precious case with a cool and humid climate, finding a safe shelter and food among the fountains and eroded cavities in the deposits of the golden clays of the Vatican hill. This small passerine with the color of the soil, called the “leprechaxie of the woods”, camouflages itself between the roots of the trees, suddenly jumping in search of worms and insects. This species is increasingly resident in this small territory, not only for its limited anthropic presence, but also for the recent “biological conversion” of the Gardens, so much so that it is hoped for its repopulation.

From the smallest exponent of wild birdlife we move on to the largest present, turninging to “Holy Spirit”, the common kestral (Falco tinnunculus), which due to the urbanization of the countryside has moved to urban centers, finding in Vatican City an ideal ecosystem. Unfortunately its offspring is sometimes preyed on, and food resources, predominantly small passerines and rodents, are less and less available. 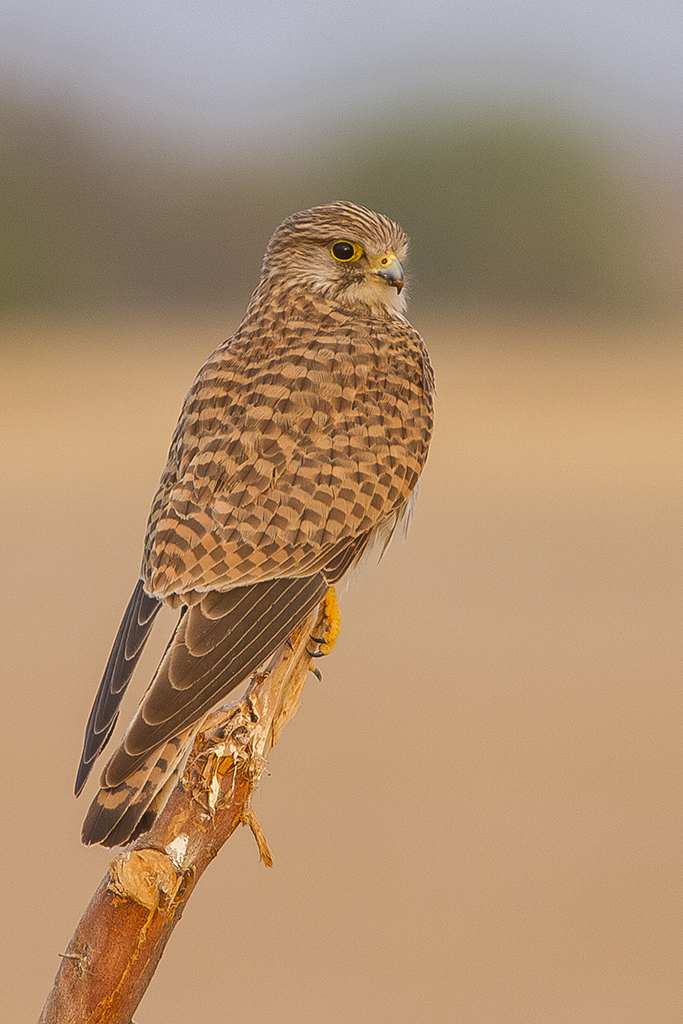 The common kestrel (Falco tinnunculus) is a bird of prey species belonging to the kestrel group of the falcon family Falconidae. It is also known as the European kestrel, Eurasian kestrel, or Old World kestrel. In Britain, where no other kestrel species commonly occurs, it is generally just called “kestrel”.

This species occurs over a large range. It is widespread in Europe, Asia, and Africa, as well as occasionally reaching the east coast of North America. It has colonized a few oceanic islands, but vagrant individuals are generally rare; in the whole of Micronesia for example, the species was only recorded twice each on Guam and Saipan in the Marianas.

Their plumage is mainly light chestnut brown with blackish spots on the upperside and buff with narrow blackish streaks on the underside; the remiges are also blackish. Unlike most raptors, they display sexual colour dimorphism with the male having fewer black spots and streaks, as well as a blue-grey cap and tail. The tail is brown with black bars in females, and has a black tip with a narrow white rim in both sexes. All common kestrels have a prominent black malar stripe like their closest relatives.

The cere, feet, and a narrow ring around the eye are bright yellow; the toenails, bill and iris are dark. Juveniles look like adult females, but the underside streaks are wider; the yellow of their bare parts is paler. Hatchlings are covered in white down feathers, changing to a buff-grey second down coat before they grow their first true plumage. 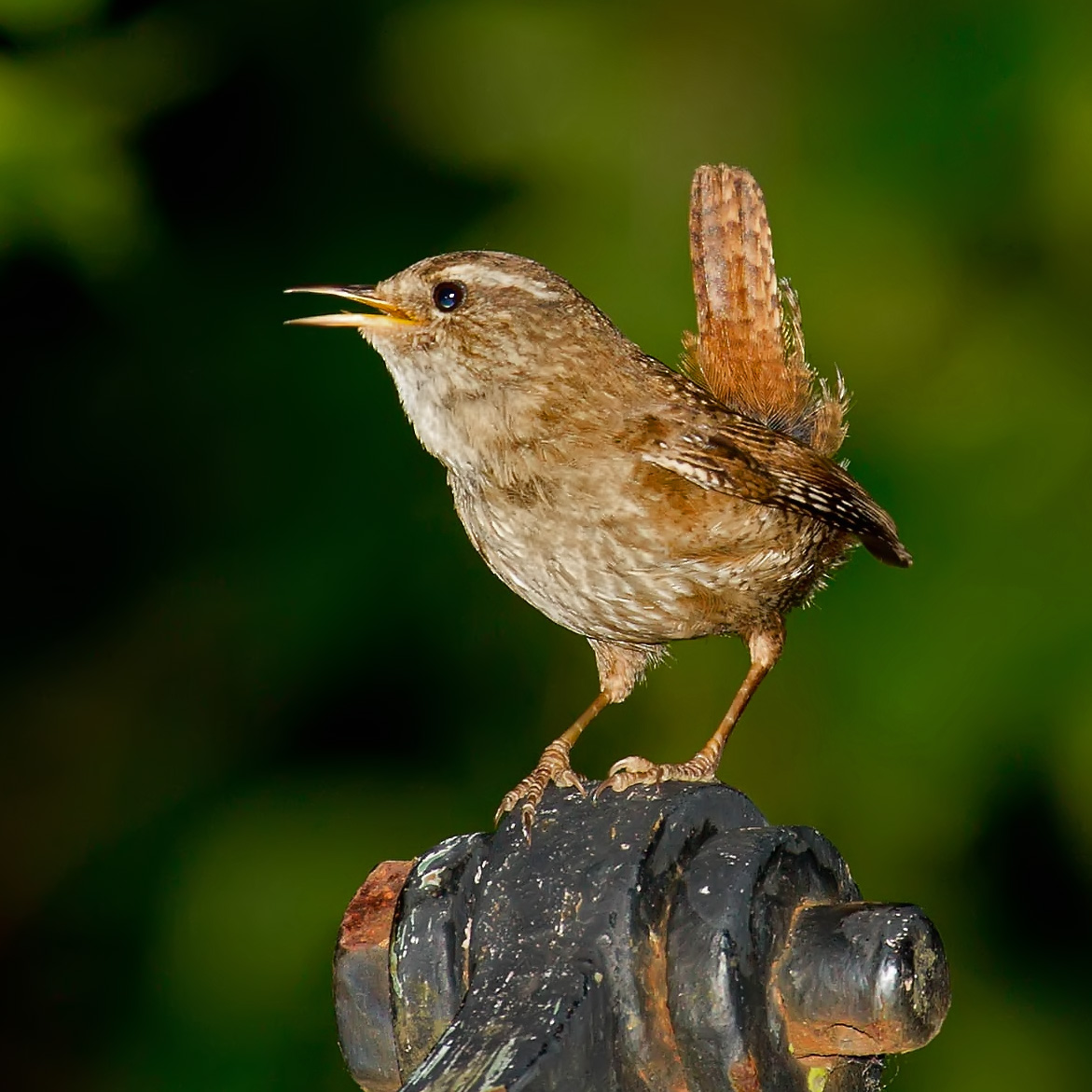 The Eurasian wren (Troglodytes troglodytes) is a very small insectivorous bird, and the only member of the wren family Troglodytidae found in Eurasia and Africa. In Anglophone Europe, it is commonly known simply as the wren. It has a very short tail which is often held erect, a short neck and a relative long thin bill. It is russet brown above, paler buff-brown below and has a cream buff supercilium. The sexes are alike.

It was once lumped with Troglodytes hiemalis of eastern North America and Troglodytes pacificus of western North America as the winter wren. The Eurasian wren occurs in Europe and across the Palearctic – including a belt of Asia from northern Iran and Afghanistan across to Japan. It is migratory in only the northern parts of its range. It is also highly polygynous, an unusual mating system for passerines.

The scientific name is taken from the Greek word “troglodytes” (from trogle a hole, and dyein to creep), meaning “cave-dweller”, and refers to its habit of disappearing into cavities or crevices whilst hunting arthropods or to roost. The taxonomy of the genus Troglodytes is currently unresolved, as recent molecular studies have suggested that Cistothorus spp. and Thryorchilus spp. are within the clade currently defined by Troglodytes.

The Eurasian wren is a plump, sturdy bird with rounded wings and a short tail, which is usually held cocked up. The adult bird is 9 to 10 cm (3.5 to 3.9 in) in length and has a wingspan of 13–17 cm (5.1–6.7 in). It weighs around 10 g (0.35 oz). It is rufous brown above, greyer beneath, and indistinctly barred with darker brown and grey, even on the wings and tail. The bill is dark brown and the legs are pale brown, the feet having strong claws and a large hind toe. Young birds are less distinctly barred and have mottled underparts. The plumage is subject to considerable variation, and where populations have been isolated, the variation has become fixed in one minor form or another.

There are around 28 subspecies of this taxonomically complex bird. The disputed subspecies T. t. orii, the Daito wren, became extinct around 1940 – if it was indeed a valid taxon and not merely based on an anomaly. Thus in Scotland, in addition to the typical bird T. t. indigenus, there are three distinct insular subspecies: one, T. t. hirtensis, is confined to the island of St. Kilda; another, T. t. zetlandicus, to the Shetland Islands; and the third, T. t. fridariensis, to Fair Isle. The St. Kilda wren is greyer above, whiter beneath, with more abundant bars on the back; the Shetland wren and Fair Isle wren are darker.