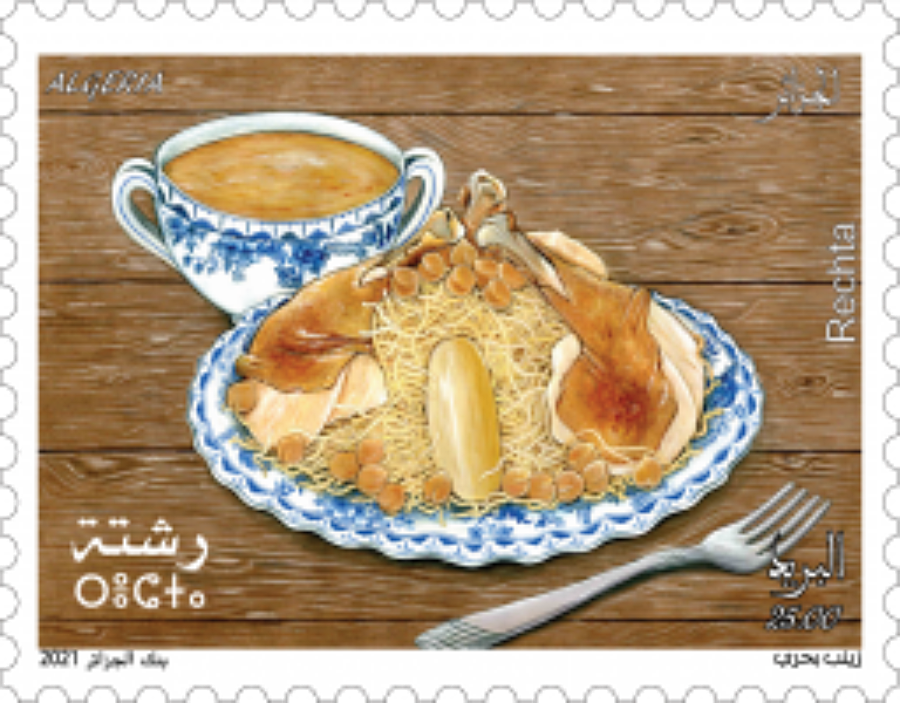 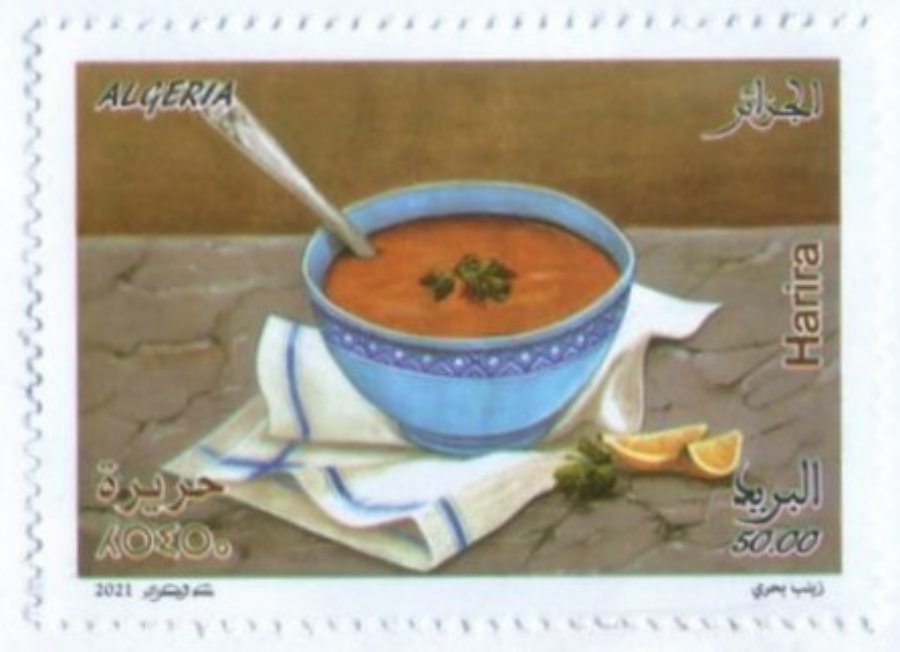 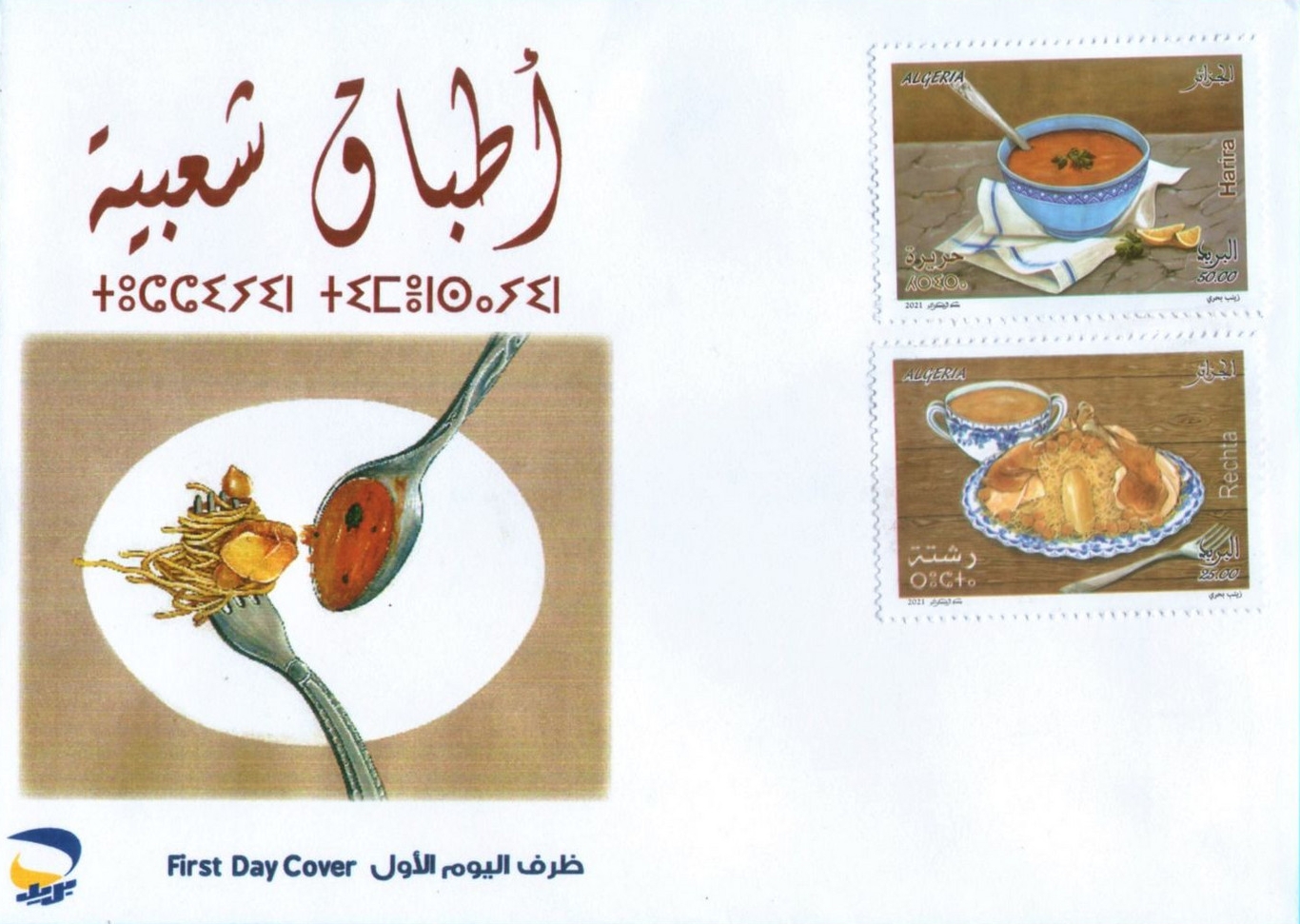 Algerian cuisine is distinguished by its richness, which comes from land and sea production. It is Mediterranean and North African cuisine based on Arabic, Berber and Turkish cuisine.

Algerian cuisine combines a variety of ingredients, including vegetables, fruits, spices, meat, fish, seafood, vegetables and dried fruit. Vegetables are often used in salads, soups, tagines, couscous and sauce dishes. We find that a dish differs in the way it is prepared from one region to another.

Rechta: is one of the most popular dishes in Algeria, common in all regions of central Algeria. It is a type of long, large and thin pasta, drizzled with red or white sauce covered with pieces of meat with some vegetables such as turnip, green pumpkin and carrots cut into long pieces. Chickpeas are also added.

Harira: This type of authentic Algerian dish of Andalusian origin is a complete meal and very rich in the ingredients it contains only by its method of preparation.

The “Harira” is one of the most well-known dishes of western Algeria in particular and it is a soup that characterizes the tables of Ramadan. In terms of health, it is one of the most nutritious and varied soups, it is a complete meal. It contains animal and plant proteins and large amounts of vitamins, such as: vitamin A, B, and minerals, such as iron, phosphorus and calcium. It also includes carbohydrates and fats, so it’s a high-calorie dish.

The “harira” meal contains about 250g and about 420 calories.

The cuisine of Algeria is influenced by Algeria’s interactions and exchanges with other cultures and nations over the centuries. It is characterized by a wealth derived from both land and sea products. Conquests or demographic movement towards the Algerian territory were two of the main factors of exchanges between the different peoples and cultures (Berbers, Arabs, Turks, Andalusians, French and Spaniards). This cuisine is a Mediterranean and North African cuisine with Berber roots.

Algerian cuisine offers a variety of dishes depending on the region and the season, but vegetables and cereals remain at its core. Most of the Algerian dishes are centered around bread, meats (lamb, beef or poultry), olive oil, vegetables and fresh herbs. Vegetables are often used for salads, soups, tajines, couscous and sauce-based dishes. Of all the Algerian traditional dishes available, the most famous one is couscous, recognized as a national dish.

Pork consumption is forbidden to Muslims in Algeria, in accordance with Sharia, the Islamic law.

Algeria, like other Maghreb countries, produces a large range of Mediterranean fruits and vegetables and even some tropical ones. Lamb is commonly consumed. Mediterranean seafood and fish are also eaten and produced by the little inshore fishing.

A common and one of the most favorite dishes of Algerian cuisine is couscous, with other favorites such as shakshouka, karantita, and marqa bel a’assel, a speciality from Tlemcen. A popular Algerian meat is merguez, an originally Berber sausage.

Algeria has four well-known traditional soups consumed throughout the country: chorba, harira, djari and tchicha. These traditional Algerian soups are served at the beginning of the meal as an entrée and are mainly prepared from lamb, mutton or chicken, chickpeas, tomatoes, vermicelli, wheat, spices and different vegetables and legumes. These varied soups are the most popular during the holy month of Ramadan.

There are many different types of Algerian salads, including both raw and cooked vegetables, served either hot or cold. Hot salads include zaalouka, an aubergine and tomato mixture, and chakchouka, a mixture of tomatoes, smoked green peppers, garlic, eggs and spices. Influenced by both the Algerian and Mediterranean cuisines, chakchouka may include beetroot or anchovies. There are also dishes of Spanish origin in Algeria, like the gaspacho oranais, an Algerian version of a Manchego dish.

Algerians commonly use tajines, a earthenware pot, to cook. Algerian chefs take much pride in cooking skills and methods and their many secrets lie in the variety of ways they mix special spices.

Harira (Arabic: الحريرة‎ al-ḥarīra, Berber languages: ⴰⵣⴽⵉⴼ azkif) is a traditional North African soup prepared in Morocco and Algeria. It is popular as a starter but is also eaten on its own as a light snack. There are many variations and it is mostly served during Ramadan, although it can be made throughout the year.

It is also part of the Maghrebi cuisine, where lemon juice and egg is added to brighten the flavors of the soup. Like Muslims, who traditionally have the filling soup for Iftar meals, Jews break their fast with it during Yom Kippur.

Harira’s base-recipe is composed of the following ingredients, and may vary depending on regions:

The stock, usually lamb, is well-seasoned with cinnamon, ginger, turmeric or another coloring agent like  saffron, and fresh herbs such as cilantro  and parsley.

Lemon juice can also be added at serving time. The soup tastes best if it has been allowed to rest overnight.

It is usually served with hard-boiled eggs sprinkled with salt and cumin, dates and other favorite dried fruits like figs, traditional honey sweets and other home-made special breads or crepes.