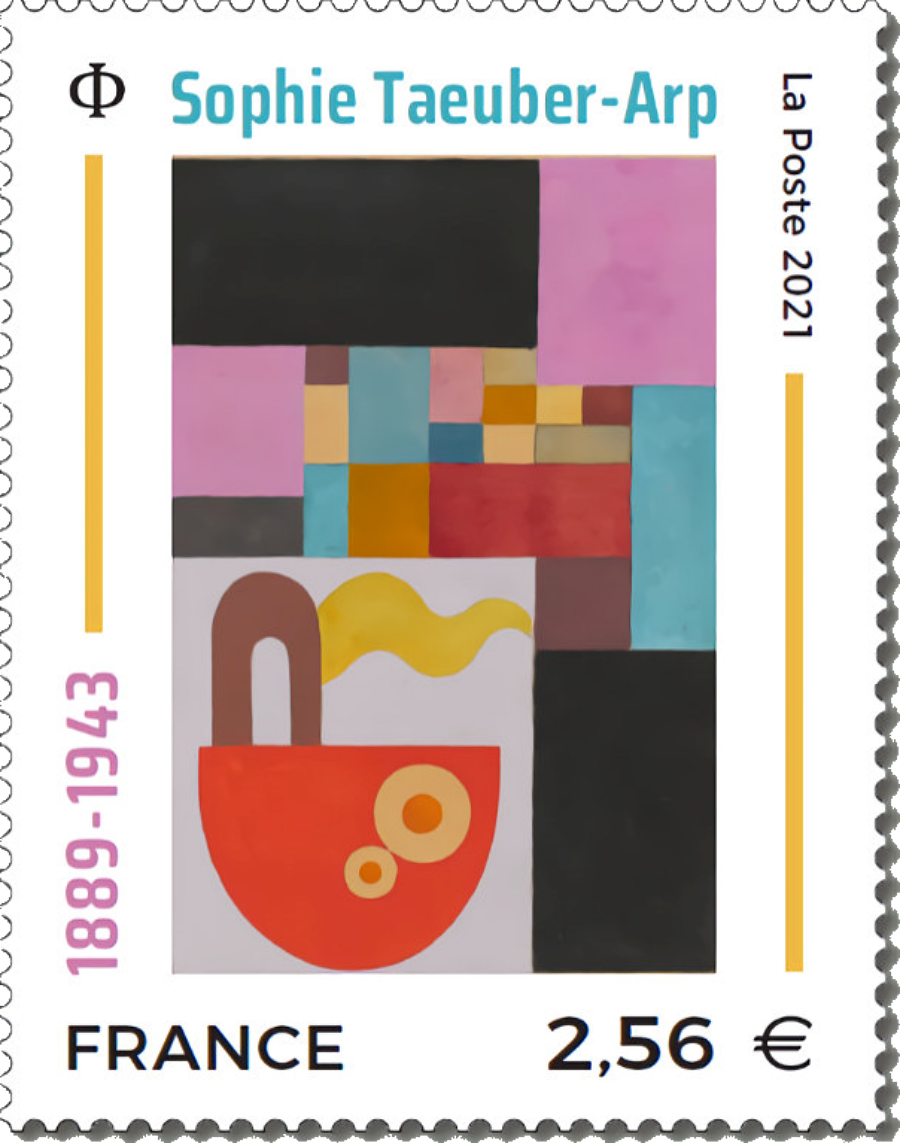 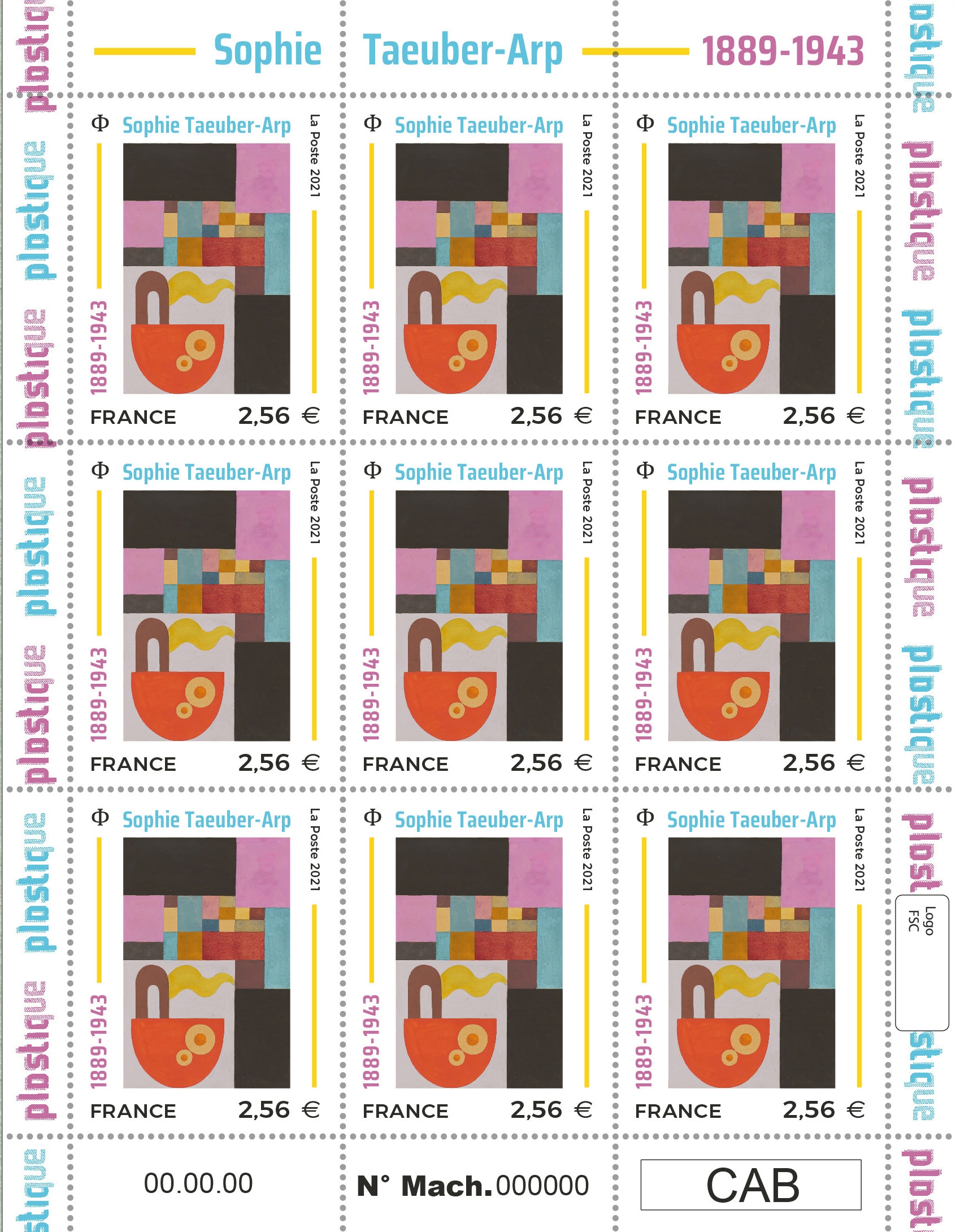 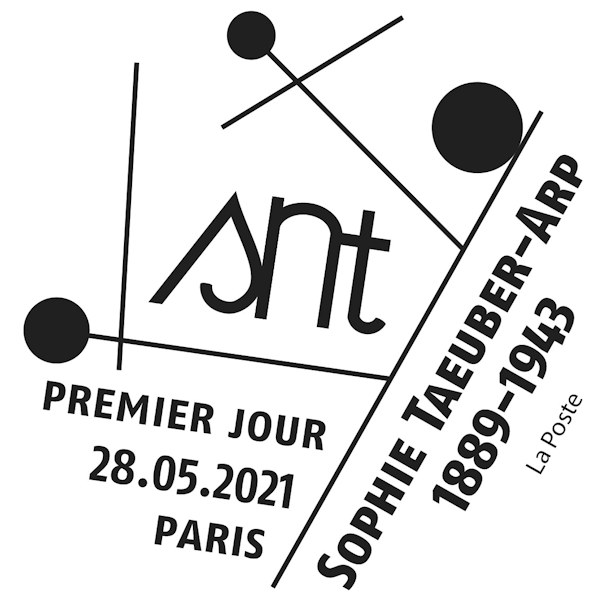 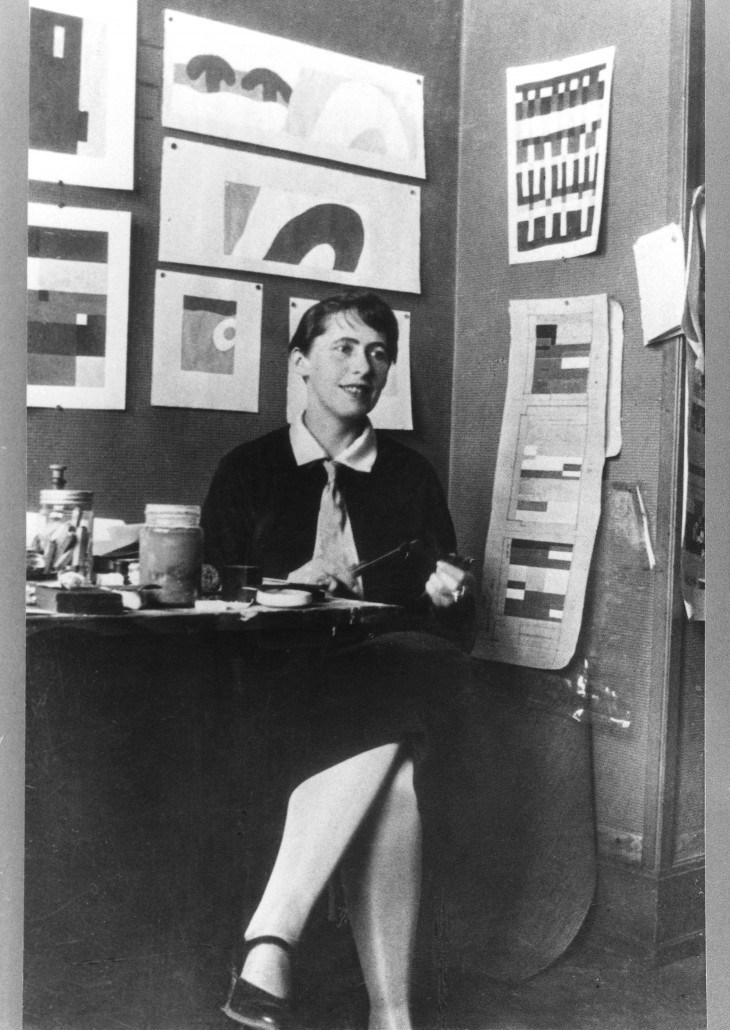 Born in 1889, in Switzerland, the daughter of a pharmacist, the family moved to Germany when she was two years old. Some years later she began attending art schools, and moved back to Switzerland during the First World War. At an exhibition in 1915, she met for the first time the German-French artist Hans/Jean Arp, whom she married shortly after. It was during these years that they became associated with the Dada movement, which emerged in 1916, and Taeuber-Arp’s most famous works – Dada Head (Tête Dada; 1920) – date from these years. They moved to France in 1926, where they stayed until the invasion of France during the Second World War, at the event of which they went back to Switzerland. In 1943, she died in an accident with a leaking gas stove.

Despite being overlooked since her death, she is considered one of the most important artists of concrete art and geometric abstraction of the 20th century.

Born in Davos, Switzerland, Sophie Henriette Gertrud Taeuber was the fifth child of Prussian pharmacist Emil Taeuber and Swiss Sophie Taeuber-Krüsi, from Gais in Appenzell Inner Rhodes, Switzerland. Her parents operated a pharmacy in Davos until her father died of tuberculosis when she was two years old, after which the family moved to Trogen, where her mother opened a pension. She studied textile design at the trade school (Gewerbeschule, today School of Applied Arts) in St. Gallen (1906–1910). She then moved on to the workshop of Wilhelm von Debschitz at his school in Munich, where she studied in 1911 and again in 1913; in between, she studied for a year at the School of Arts and Crafts (Kunstgewerbeschule) in Hamburg.

In 1914, due to World War One, she returned to Switzerland.[2] She joined the Schweizerischer Werkbund in 1915. In the same year, she attended the Laban School of Dance in Zurich, and in the summer she joined the artist colony of Monte Verita in Ascona; in 1917, she danced with Suzanne Perrottet, Mary Wigman and others at the Sun Festival organised by Laban in Ascona. From 1916 to 1929, Taeuber was an instructor at Zürich Kunstgewerbeschule in Switzerland, teaching embroidery and design classes.

In 1915, at an exhibition at the Tanner Gallery, she met the Dada artist Jean “Hans” Arp, who had moved to Zurich in 1915 to avoid being drafted by the German Army during the First World War. They were to collaborate on numerous joint projects until her death in 1943. They married in 1922 and she changed her last name to Taeuber-Arp.

Taeuber-Arp taught weaving and other textile arts at the Kunstgewerbeschule Zürich (now Zurich University of the Arts) from 1916 to 1929. Her textile and graphic works from around 1916 through the 1920s are among the earliest Constructivist works, along with those of Piet Mondrian and Kasimir Malevich. These sophisticated geometric abstractions reflect a subtle understanding of the interplay between colour and form.

During this period, she was involved in the Zürich Dada movement, which centered on the Cabaret Voltaire. She took part in Dada-inspired performances as a dancer, choreographer, and puppeteer, and she designed puppets, costumes and sets for performances at the Cabaret Voltaire as well as for other Swiss and French theatres. At the opening of the Galerie Dada in 1917, she danced to poetry by Hugo Ball while wearing a shamanic mask by Marcel Janco. A year later, she was a co-signer of the Zurich Dada Manifesto. As both a dancer and painter, Taeuber was able to incorporate Dada in her movement for dancing and was described as obscure and awkward.

She also made a number of sculptural works, such as a set of abstract “Dada Heads” of turned polychromed wood. With their witty resemblance to the ubiquitous small stands used by hatmakers, they typified her elegant synthesis of the fine and applied arts.

Taeuber-Arp was also close friends and contemporaries with the French-Romanian avant-garde poet, essayist, and artist, Tristan Tzara, one of the central figures of the Dada movement. In 1920, Tzara solicited over four dozen Dadaist artists, among which were Taeuber-Arp, Jean Arp, Jean Cocteau, Marcel Duchamp, and Hannah Hoch. Tzara planned to use the contributed text and images to create an anthology of Dada work entitled Dadaglobe. A worldwide release of 10,000 copies was planned, but the project was abandoned when its main backer, Francis Picabia, distanced himself from Tzara in 1921.

The Guardian called her a “radical artist who brought joy to the dada”. Though dada has been described as an early form of subversive pop culture likened by some to the punk subculture, critics have said that Taeuber’s artworks were not angry but “joyous abstractions”, created as part of a movement that has been called revolutionary for its influence challenging the established conventions of art by “playing with blocks and blobs of colour, moving them around randomly, letting patterns emerge by chance, in a kind of visual jazz.”

In 1926 Taeuber-Arp and Jean Arp moved to Strasbourg, where both took up French citizenship; after which they divided their time between Strasbourg and Paris. There Taeuber-Arp received numerous commissions for interior design projects; for example, she was commissioned to create a radically Constructivist interior for the Café de l’Aubette – a project on which Jean Arp and de Stijl artist Theo van Doesburg eventually joined her as collaborators. In 1927 she co-authored a book entitled Welly Lowell with Blanche Gauchet.

From the late 1920s, she lived mainly in Paris and continued experimenting with design. The couple became French citizens in 1926 and in 1928 they moved to Meudon/Val-Fleury, outside Paris, where she designed their new house and some of its furnishings. She was an exhibitor at the Salon des surindépendents in Paris in 1929–30.

In the 1930s, she was a member of the group Cercle et Carré, founded by Michel Seuphor and Joaquín Torres García as a standard-bearer of non-figurative art, and its successor, the Abstraction-Création group (1931–34). Taeuber-Arp also provided the cover art for the February 1933 issue of Eugene Jolas’s avant-garde little magazine, transition.

Sophie Taeuber-Arp explored the circle which represented the cosmic metaphor, the form that contains all others. She referred to this period as “ping pictures”. She appears to be the first artist to use polka dots in fine art with works such as Dynamic Circles, 1934, in the footsteps of Kazimir Malevich and his Black Circle (1915).

Later in the decade she founded a Constructivist review, Plastique (Plastic) in Paris. Her circle of friends included the artists Sonia Delaunay, Robert Delaunay, Wassily Kandinsky, Joan Miró, and Marcel Duchamp. She was also a member of Allianz, a union of Swiss painters, from 1937 to 1943. In 1940, Taeuber-Arp and Arp fled Paris ahead of the Nazi occupation and moved to Grasse in Vichy France, where they created an art colony with Sonia Delaunay, Alberto Magnelli, and other artists. At the end of 1942, they fled to Switzerland.

In early 1943, Taeuber-Arp died of accidental carbon monoxide poisoning caused by an incorrectly operated stove at the house of Max Bill.

Wassily Kandinsky said: “Sophie Taeuber-Arp expressed herself by means of the ‘colored relief,’ especially in the last years of her life, using almost exclusively the simplest forms, geometric forms. The forms, by their sobriety, their silence, their way of being sufficient unto themselves, invite the hand, if it is skillful, to use the language that is suitable to it and which is often only a whisper; but often too the whisper is more expressive, more convincing, more persuasive, than the ‘loud voice’ that here and there lets itself burst out.”

In 2014, at the Danser sa vie dance and art exhibition at the Centre Georges Pompidou in France, a photograph was displayed of Taeuber-Arp dancing in a highly stylized mask and costume at the Cabaret Voltaire in 1917.

Taeuber-Arp was the only woman on the eighth series of Swiss banknotes; her portrait was on the 50-franc note from 1995 to 2016.

A museum honoring Taeuber-Arp and Jean Arp opened in 2007 in a section of the Rolandseck railway station in Germany, re-designed by Richard Meier. The video work “Sophie Taeuber-Arp’s Vanishing Lines” (2015) by new media artist Myriam Thyes from Switzerland is about her “Lignes” drawings, segmented circles intersected by lines.

On 19 January 2016, Google created a Google Doodle for Sophie to commemorate her 127th birthday. The doodle was made by Mark Holmes, who describes Taeuber-Arp as “such a prolific and diverse artist.”