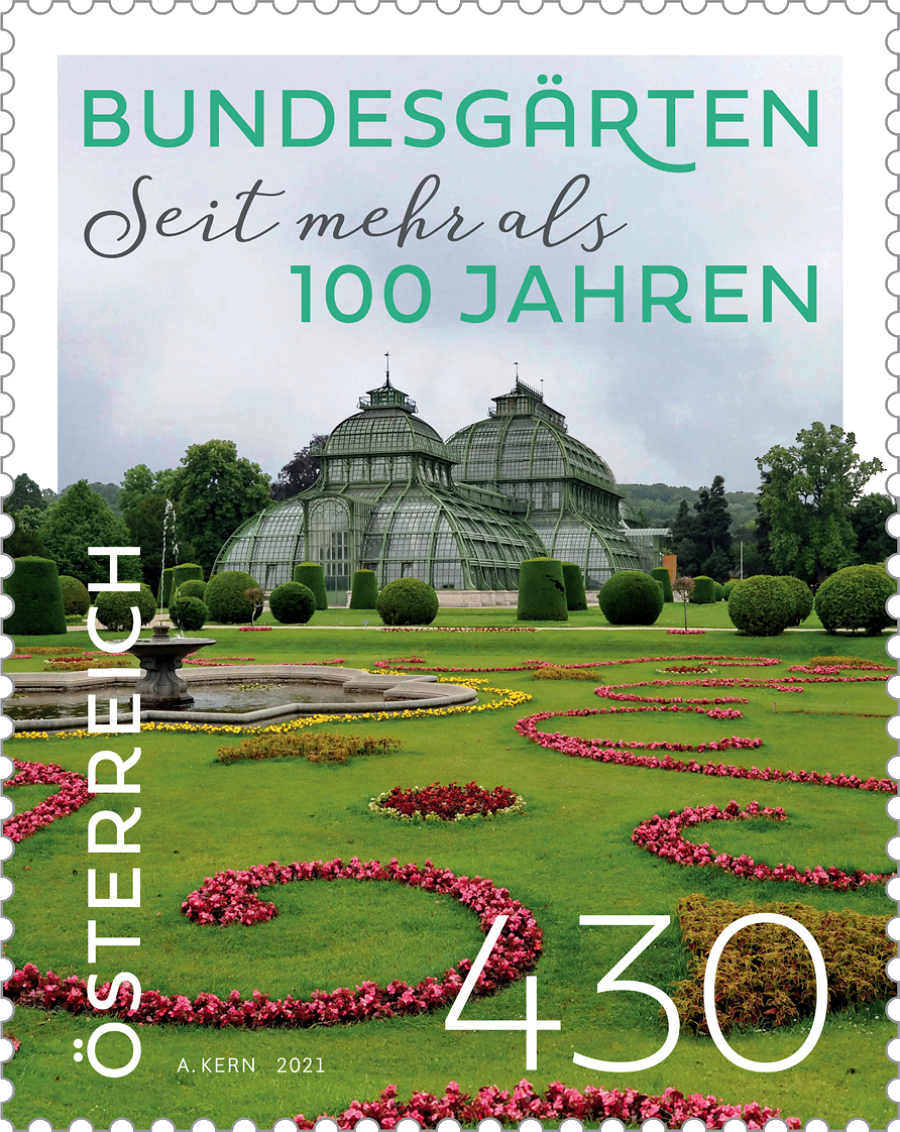 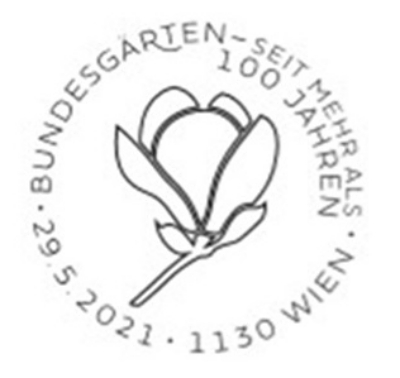 A scented lacquer adds a luxurious and very special touch to this commemorative stamp: if you rub the stamp, it will smell like flowers.

Austria’s Federal Gardens include seven historic and protected gardens and parks, which makes them popular tourist destinations and important public areas of leisure. Since the end of the Habsburg monarchy, the former imperial gardens have belonged to the Republic of Austria. They include Schönbrunn Palace park, Augarten park, the Belvedere gardens, Burggarten park and Volksgarten park (including Heldenplatz square and Maria Theresa square) in Vienna as well as the Innsbruck Hofgarten park and the Ambras Palace park in Tyrol.

Augarten park is the oldest remaining Baroque park in Vienna, it dates back to the 17th and 18th centuries. Belvedere Palace was built for Prince Eugen around 1700 and includes the Alpine Garden, the Belvedere Botanical Garden, and Privy Park. Volksgarten park was created at the initiative of Emperor Franz I for the general population while Burggarten park used to be the Emperor’s private garden. Today, both are highly popular urban parks used for leisure activities. The same is true for the Innsbruck Hofgarten park. Ambras Palace and its park go back to the renaissance period. Schönbrunn Palace park, which has been open to the public since 1779, is home to the Desert House, the Orangery, the Privy Garden, and the Palm House built in 1882. It is featured on the commemorative stamp and used to be the world’s largest glass structure. 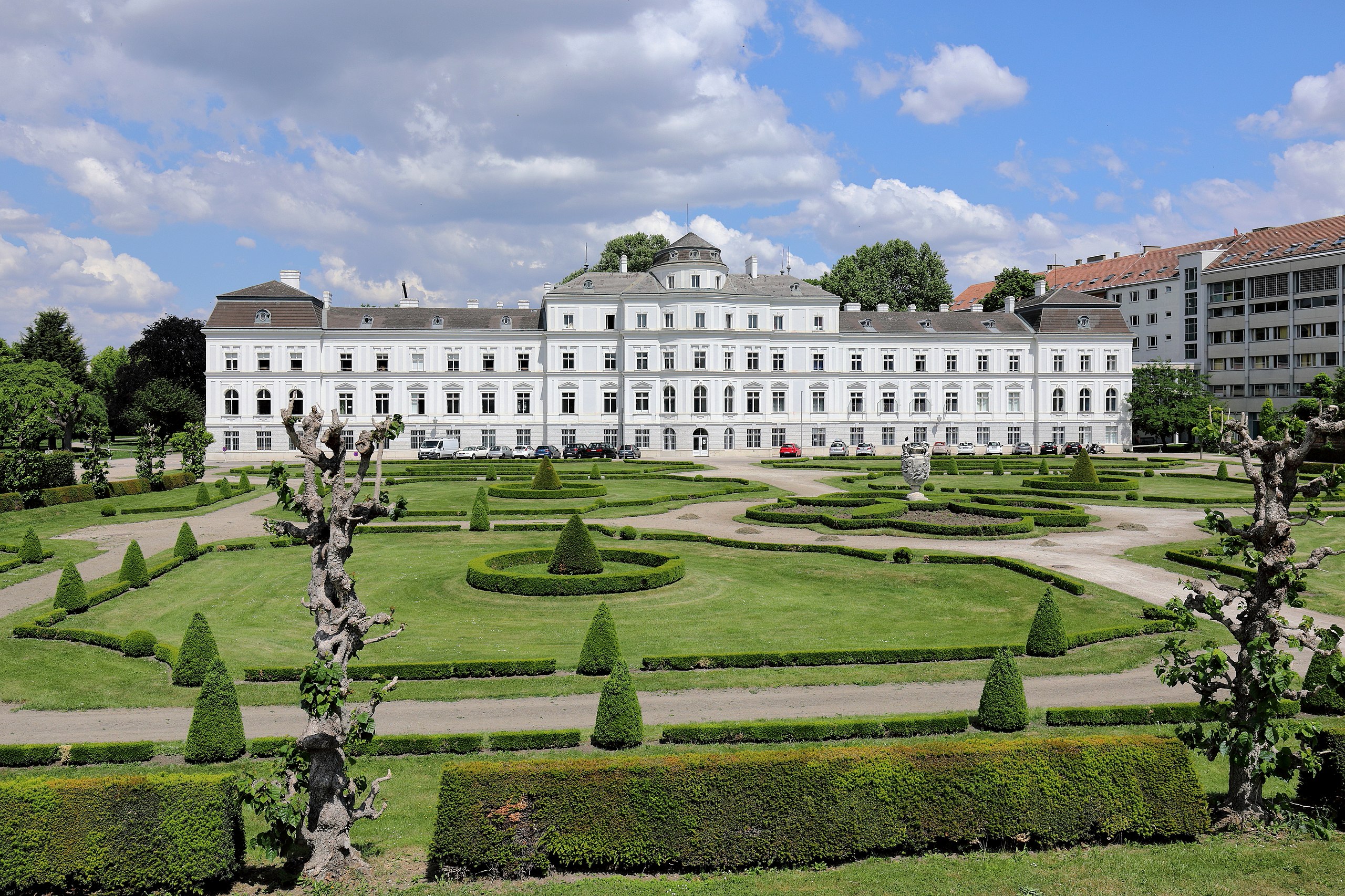 The Augarten is a public park of 52.2 hectares (129 acres) situated in the Leopoldstadt, the second district of Vienna, Austria. It contains the city’s oldest Baroque park.

In the north-west and north-east it borders (since 1900) on the 20th district, Brigittenau, in the north-east also on the former Nordwestbahnhof, from where the North Western Railway made its way to Bohemia, while to the south it faces the so-called Karmeliterviertel (“Carmelite quarter”), the historical Jewish quarter, followed by the Leopoldstadt. Until 1870 (Vienna Danube regulation), the areas north and east of the Augarten were floodlands mostly uninhabited.

The park is designed in the French Baroque style with elaborate flower gardens and impressive shady avenues of chestnut, lime, ash, and maple. Like most fenced public parks and gardens in Vienna it is open only in the daytime: the park’s five gates close at sunset (signaled by a siren).

The Augarten hosts a variety of facilities such as the Wiener Sängerknaben (the Vienna Boys’ Choir) in the Palais Augarten, the Augarten Porzellanmanufaktur (Augarten porcelain factory), the Augarten Contemporary (part of the Österreichische Galerie Belvedere, the Austrian Gallery housed in the Belvedere), the Filmarchiv Austria, a retirement home, a Jewish academic campus (called Lauder Chabad Campus),[1] a paddling pool for children and sports fields. Significant testimonials to the Third Reich are two high anti-aircraft bunkers (flak towers).

There are two places in the park where meals or snacks may be had, the Bunkerei (partially housed in a former bunker) and on the premises of the Filmarchiv, and in addition two catering establishments, one of them in the Atelier Augarten.

The Baroque park, the palace and the remaining part of the original park wall, dating from the early 18th century, are since 2000 listed as historic monuments.

The Volksgarten (English: People’s Garden) is a public park in the Innere Stadt first district of Vienna, Austria. The garden, which is part of the Hofburg Palace, was laid out by Ludwig Remy in 1821. The park was built over the city fortifications that were destroyed by Napoleon in 1809. The Volksgarten was opened to the public in 1823.

Between 1817 and 1821, the area near Ballhausplatz square was converted to gardens originally intended for a private garden for the archdukes. These plans were changed through a proposal by the court garden administration to turn the area into the first public park in the city. On 1 March 1823, the park was officially opened. Starting in 1825, the name Volksgarten was commonly used. In 1862, the gardens were extended toward Ringstraße after the city moat had been filled in.

At the center of the park stands the neoclassical Theseus Temple by Pietro di Nobile, completed in 1821.[1] This small-scale replica of the Temple of Hephaestus in Athens was originally designed to house Antonio Canova’s Theseus sculpture. Canova was also involved in the construction of the temple. In 1890, Canova’s sculpture was moved to the Museum of Fine Arts.

The Cortisches coffee house was built between 1820 and 1823, also by Peter Nobile. Austrian Romantic composers Johann Strauss I and Joseph Lanner performed here.

The Cafè Meierei was built in 1890, originally as a water reservoir. In 1924, it was converted to the Milchtrinkhalle. The Milchpavillon was built in 1951 by Oswald Haerdtl.

At the northern end of the park stands the Empress Elizabeth Monument by Hans Bitterlich and Friedrich Ohmann [de], completed in 1907. At the center of the monument is a statue of a seated Empress Elisabeth by Hans Bitterlich. The statue of the empress, which was sculpted from an 8000–kg block of Laaser marble, measures 2.5 m in height. The dedication of the monument took place on 4 June 1907 in the presence of Emperor Franz Joseph I of Austria.

At the southern end of the park stands the Franz Grillparzer Monument by Carl Kundmann, completed in 1875. The seated figure of Austrian writer Franz Grillparzer is shown in contemplation holding a book in his left hand.

The Volksgarten contains two fountains. The Triton and Nymph Fountain was built in 1880 by Viktor Tilgner. People’s Garten Fountain was erected in 1866 by Anton Dominik Fernkorn.

The park is famous for its beautiful rose gardens with over 3,000 rose bushes of about 400 different cultivars of roses.

The Belvedere is a historic building complex in Vienna, Austria, consisting of two Baroque palaces (the Upper and Lower Belvedere), the Orangery, and the Palace Stables. The buildings are set in a Baroque park landscape in the third district of the city, on the south-eastern edge of its centre. It houses the Belvedere museum. The grounds are set on a gentle gradient and include decorative tiered fountains and cascades, Baroque sculptures, and majestic wrought iron gates. The Baroque palace complex was built as a summer residence for Prince Eugene of Savoy.

The Belvedere was built during a period of extensive construction in Vienna, which at the time was both the imperial capital and home to the ruling Habsburg dynasty. This period of prosperity followed on from the commander-in-chief Prince Eugene of Savoy’s successful conclusion of a series of wars against the Ottoman Empire.

Records indicate that the construction of the Lower Belvedere had started by 1712, as Prince Eugene submitted the request for a building inspection on 5 July 1713. Work proceeded swiftly, and Marcantonio Chiarini from Bologna started painting the quadratura in the central hall in 1715. The ambassador from the Spanish Flanders visited the Lower Belvedere, as well as the Stadtpalais, in April 1716. Extensive work was carried out on the grounds at the same time as construction went ahead on the Lustschloss, as the Lower Belvedere was described on an early cityscape. Dominique Girard changed the plans for the garden significantly between January and May 1717, so that it could be completed by the following summer. Girard, who was employed as fontainier du roi, or the king’s water engineer, in Versailles from 1707 to 1715, had started working as a garden inspector for the Bavarian elector Maximilian Emanuel from 1715 onwards. It was on the latter’s recommendation that he entered Prince Eugene’s employ. The statuary for the balustrade is the best known work of Giovanni Stanetti.

The garden had a scenery enclosed by clipped hedging, even as the Belvedere was building, in the formal French manner with gravelled walks and jeux d’eau by Dominique Girard, who had trained in the gardens of Versailles as a pupil of André Le Nôtre. Its great water basin in the upper parterre and the stairs and cascades peopled by nymphs and goddesses that links upper and lower parterres survive, but the patterned bedding has long been grassed over; it is currently being restored.

Schönbrunn Palace was the main summer residence of the Habsburg rulers, located in Hietzing, Vienna. The name Schönbrunn (meaning “beautiful spring”) has its roots in an artesian well from which water was consumed by the court.

The 1,441-room Rococo palace is one of the most important architectural, cultural, and historic monuments in the country. The history of the palace and its vast gardens spans over 300 years, reflecting the changing tastes, interests, and aspirations of successive Habsburg monarchs. It has been a major tourist attraction since the mid-1950s.

The sculpted garden space between the palace and the Neptune Fountain is called the Great Parterre. The French garden, a big part of the area, was planned by Jean Trehet, a disciple of André Le Nôtre, in 1695. It contains, among other things, a maze.

The complex however includes many more attractions: besides the Tiergarten, an orangerie erected around 1755, staple luxuries of European palaces of its type, a palm house (replacing, by 1882, around ten earlier and smaller glass houses in the western part of the park) is noteworthy. Western parts were turned into English garden style in 1828–1852.

The area called Meidlinger Vertiefung to the west of the castle was turned into a play area and drill ground for the children of the Habsburgs in the 19th century. At this time it was common to use parks for the military education of young princes. Whereas the miniature bastion, which was built for this purpose, does not exist anymore, the garden pavilion that was used as shelter still does. It was turned into a café in 1927 and is known as Landtmann’s Jausen Station since 2013.

At the outmost western edge, a botanical garden going back to an earlier arboretum was re-arranged in 1828, when the Old Palm House was built. A modern enclosure for Orangutans, was restored besides a restaurant and office rooms in 2009.