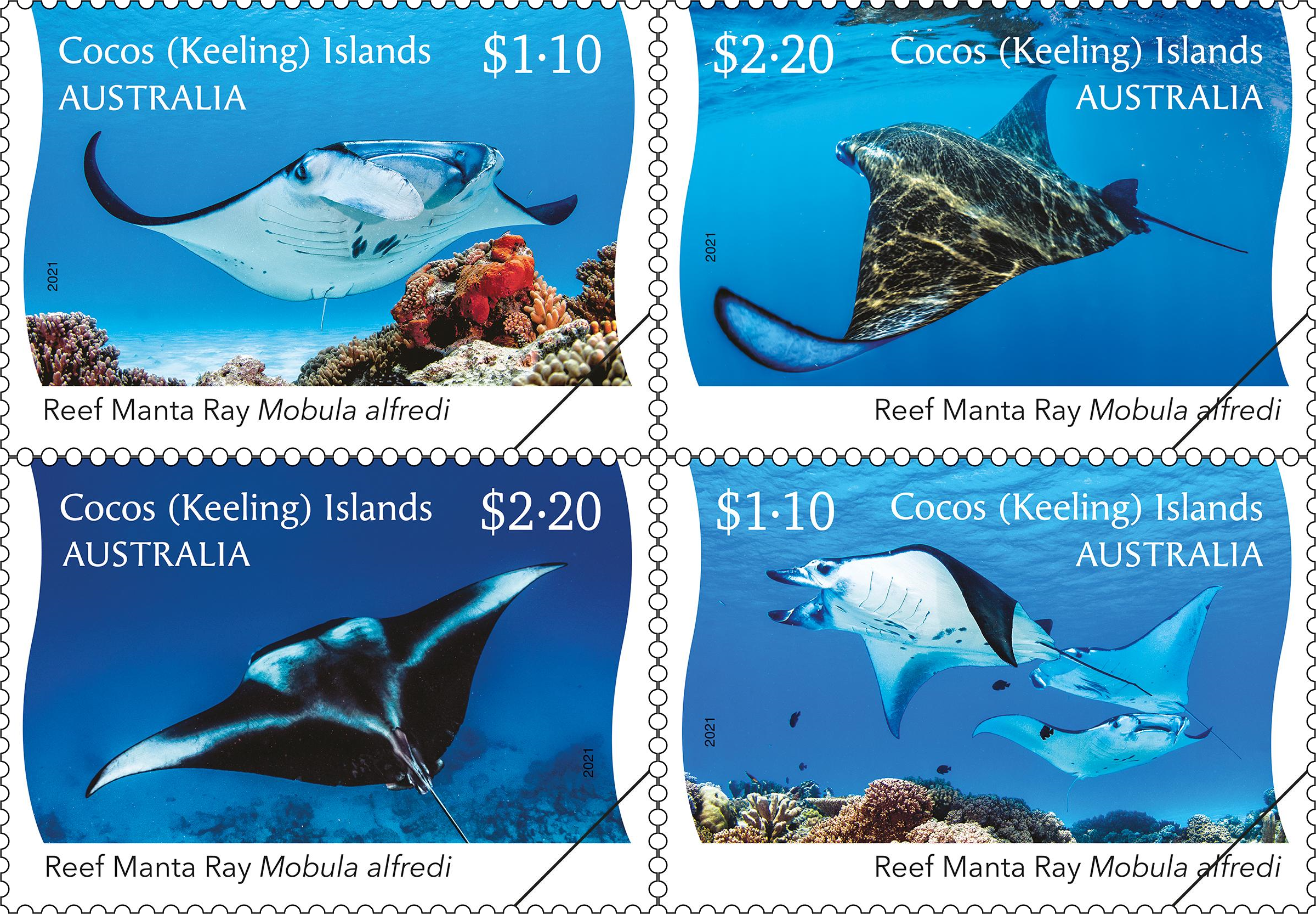 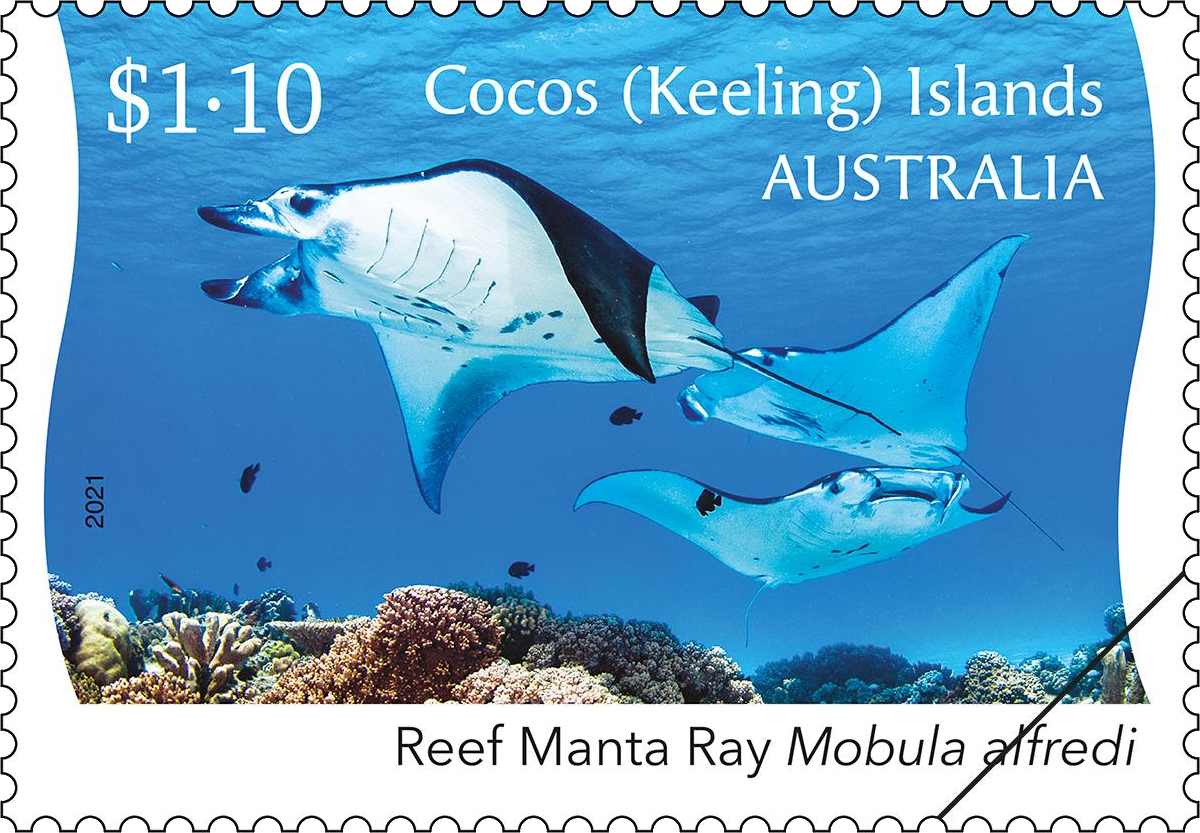 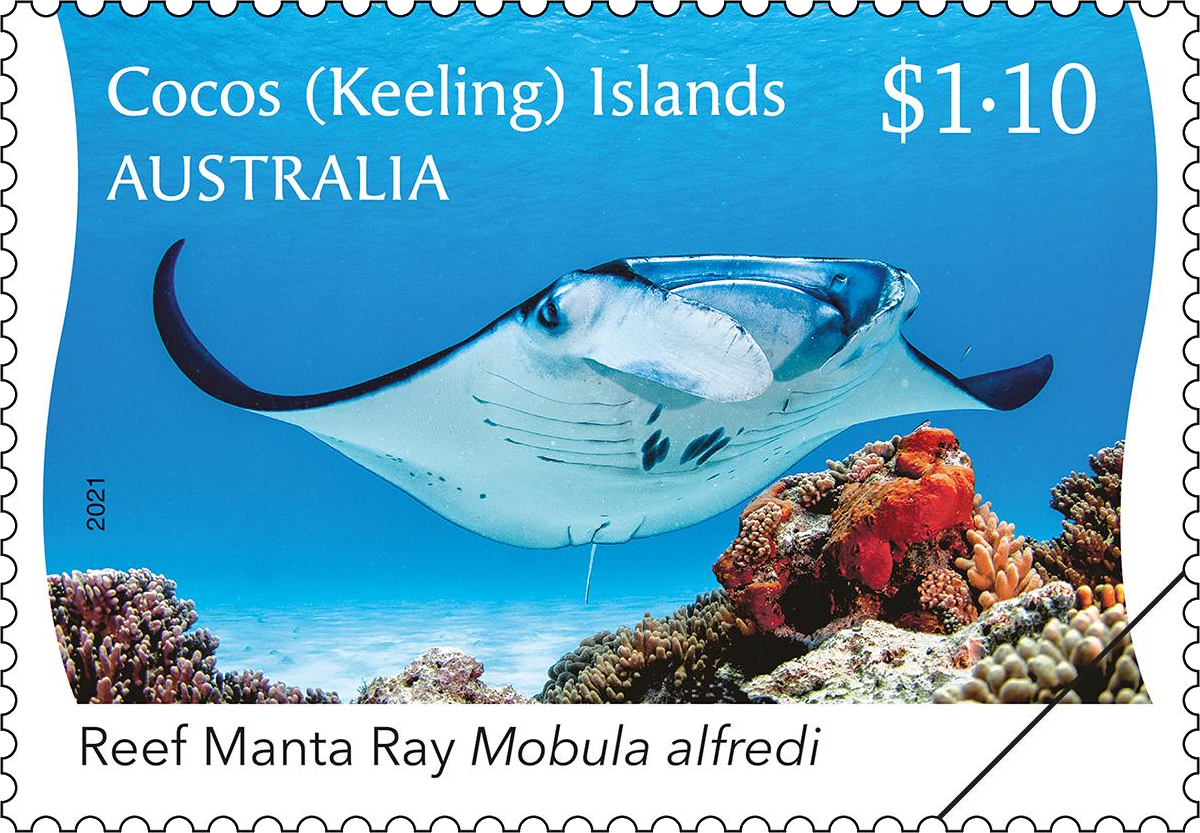 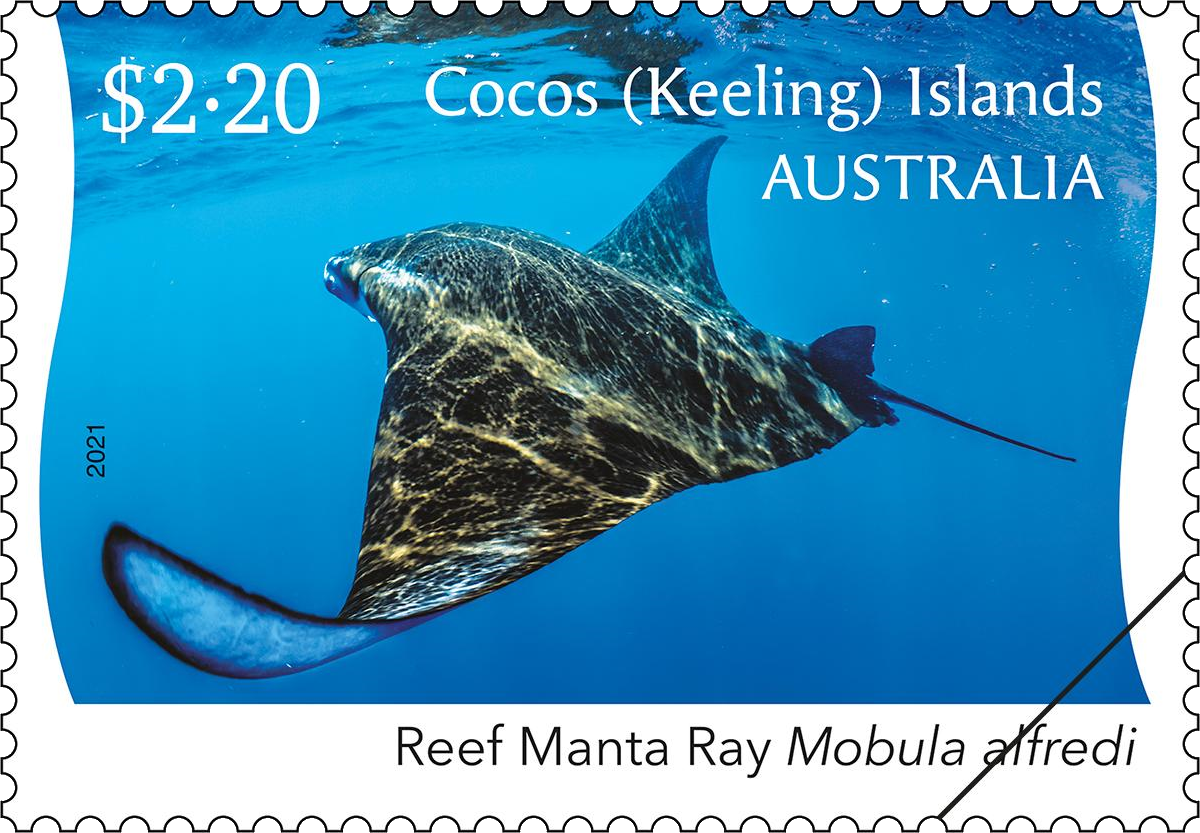 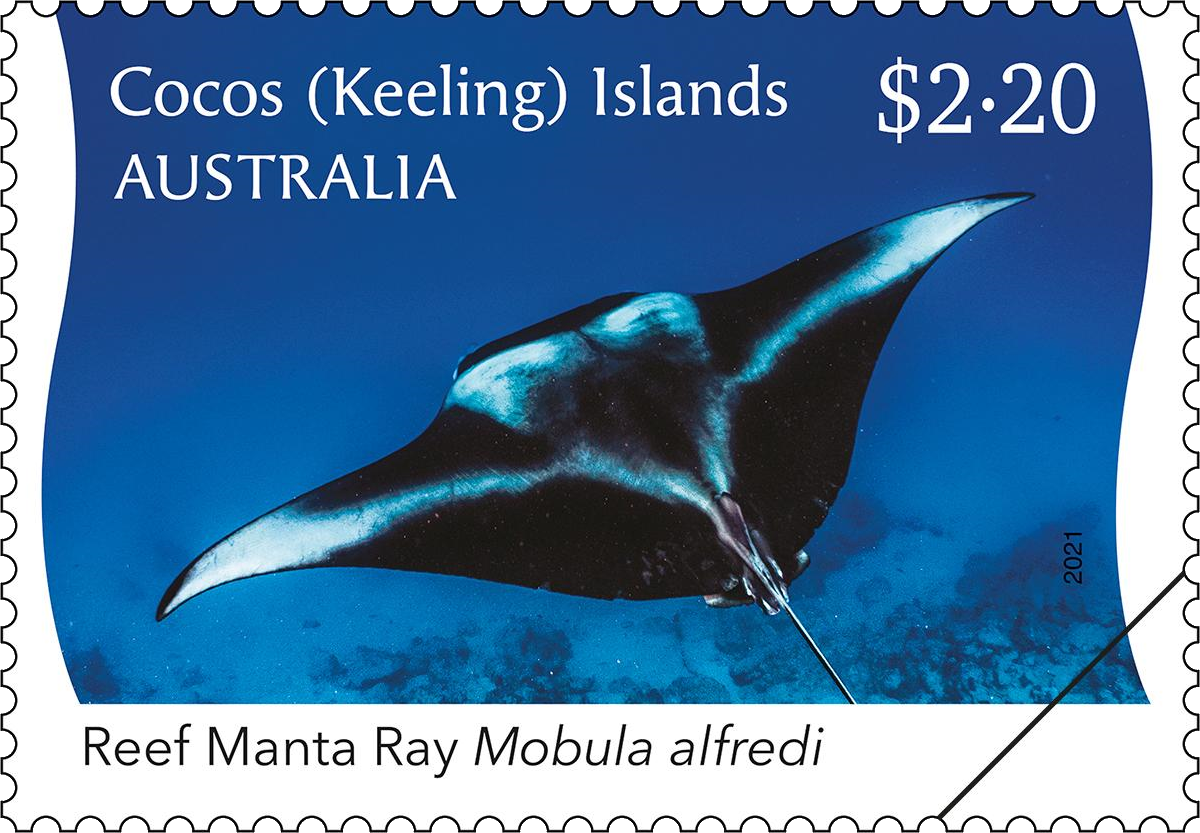 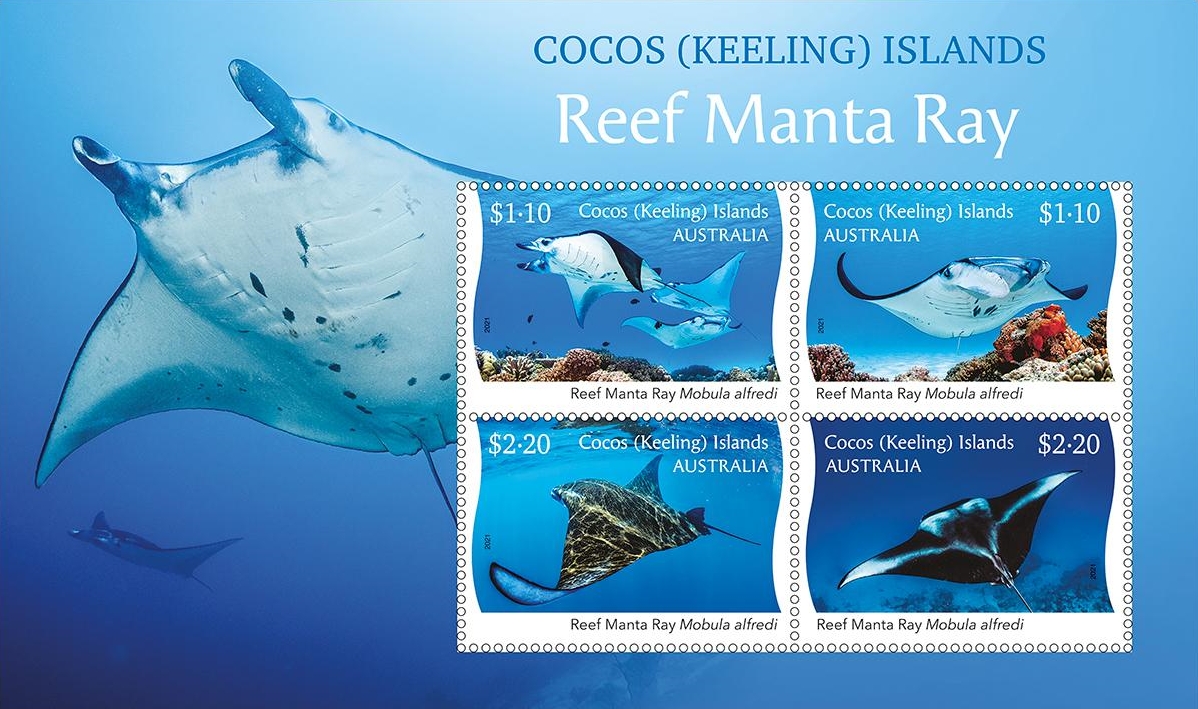 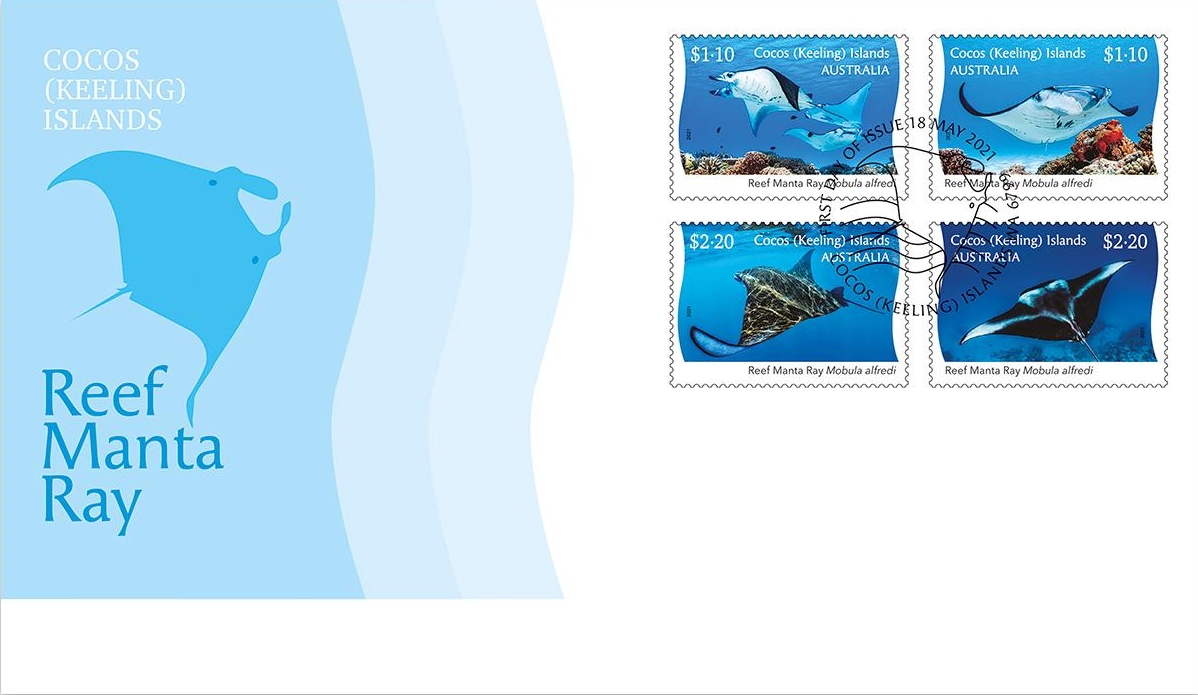 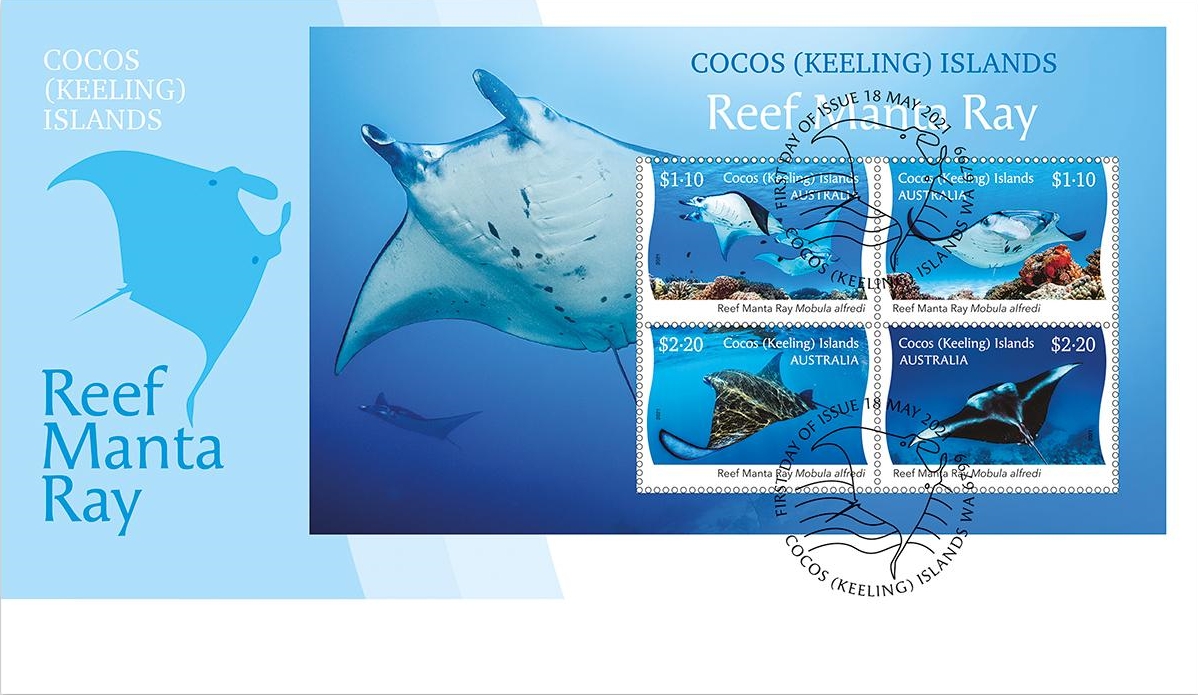 The warm waters around the Cocos (Keeling) Islands are frequented by a great range of marine life, including the Reef Manta Ray (Mobula alfredi). Found in tropical and sub-tropical parts of the Indo-Pacific, this spectacular ray reaches up to five metres in width.

Unique belly markings are used to identify individual rays, and there have been 72 reef manta rays identified around the Cocos (Keeling) Islands, with 12 individuals seen more than once. As the name suggests, this ray is generally seen in reefs close to shore but may venture out to depth to feed on zooplankton, the tiny, microscopic animals found in the water column. The female gives birth to one or sometimes two pups after a gestation period of around 12 months.

The Reef Manta Ray is classified as vulnerable on the IUCN Red List of Threatened Species.

Stamps in this issue

The Reef Manta Ray has triangular pectoral fins, horn-shaped cephalic fins and a large, forward-facing mouth. Pictured in this stamp design is a group of three rays. The stamp photograph is by Karen Willshaw.

The Reef Manta Ray’s ventral surface is generally white, with dark spots and blotches, as pictured in this stamp design. The stamp photograph is by Karen Willshaw.

The colour of the Reef Manta Ray’s dorsal side is dark grey or black with white areas near the top of the head. This stamp design showcases a Reef Manta Ray with dark dorsal colouring. The stamp photograph is by Karen Willshaw.

This stamp design features a Reef Manta Ray with black and white colouring on the dorsal side. The stamp photograph is by Karen Willshaw.

The species was described in 1868 by Gerard Krefft, the director of the Australian Museum. He named it M. alfredi in honor of Alfred, Duke of Edinburgh, the first member of the British royal family to visit Australia.[4] It was originally described as part of the genus Manta but in 2017 was changed, along with the rest of the mantas, to be included as part of the genus Mobula.

Reef manta rays are typically 3 to 3.5 m (9.8 to 11.5 ft) in disc width, with a maximum size of about 5.5 m (18 ft). For a long time included in M. birostris, the status of the reef manta ray as a separate species was only confirmed in 2009. The reef manta ray is found widely in the tropical and subtropical Indo-Pacific, but with a few records from the tropical East Atlantic and none from the West Atlantic or East Pacific. Compared to the giant oceanic manta ray, the reef manta ray tends to be found in shallower, more coastal habitats, but local migrations are sometimes reported. Mobula birostris is similar in appearance to Mobula alfredi and the two species may be confused as their distribution overlaps. However, there are distinguishing features.