XIII National Congress of the Communist Party of Vietnam 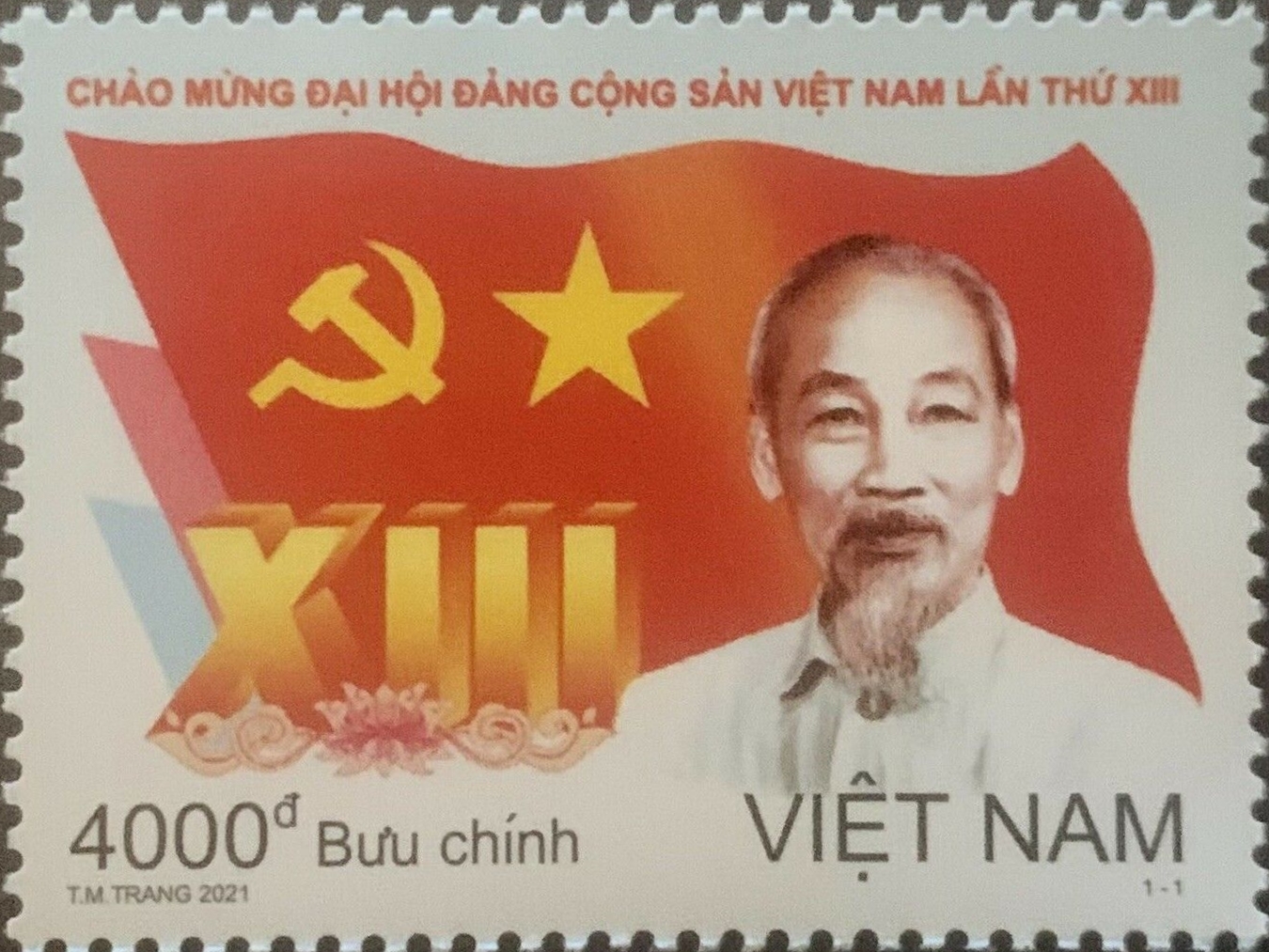 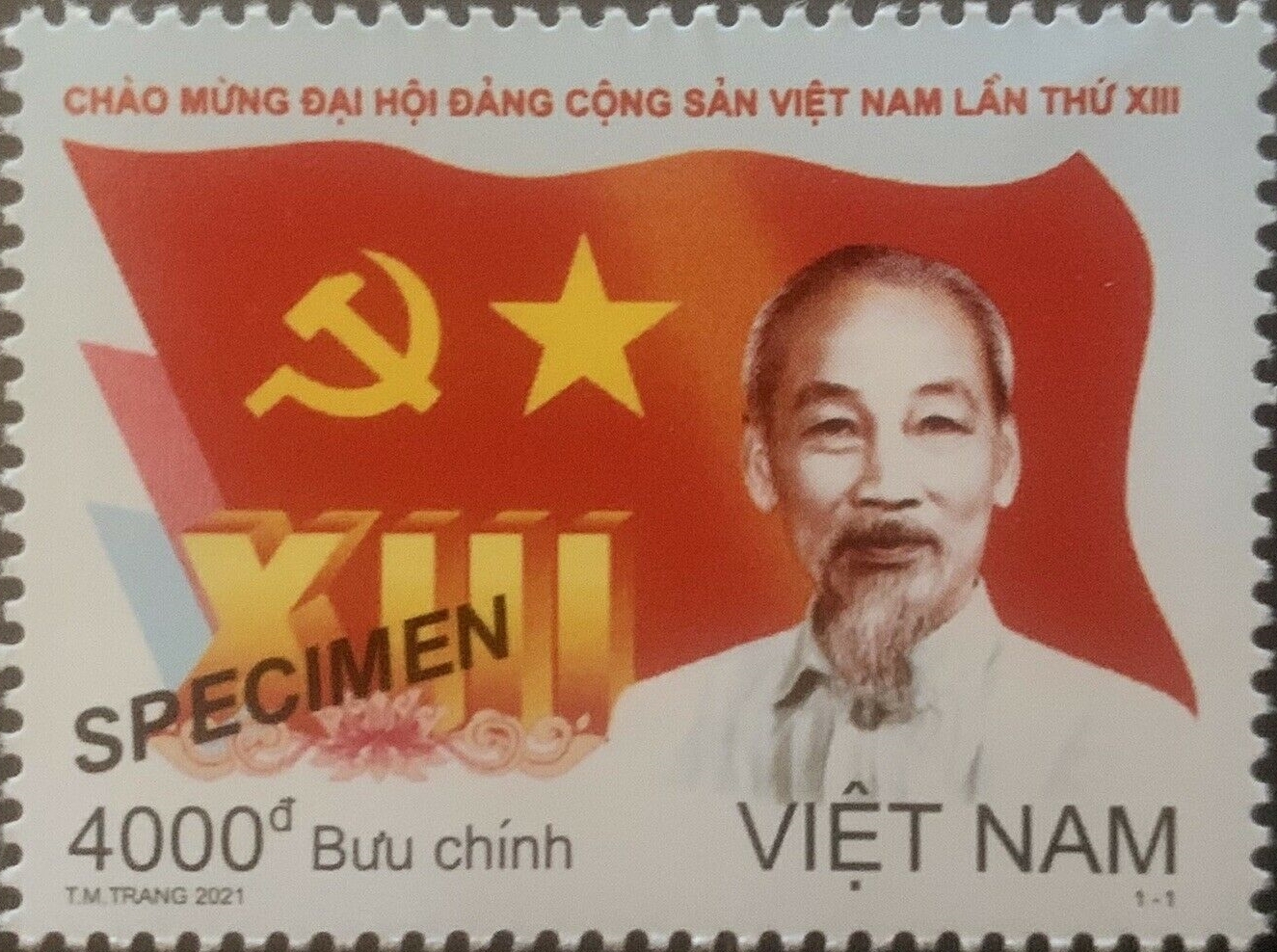 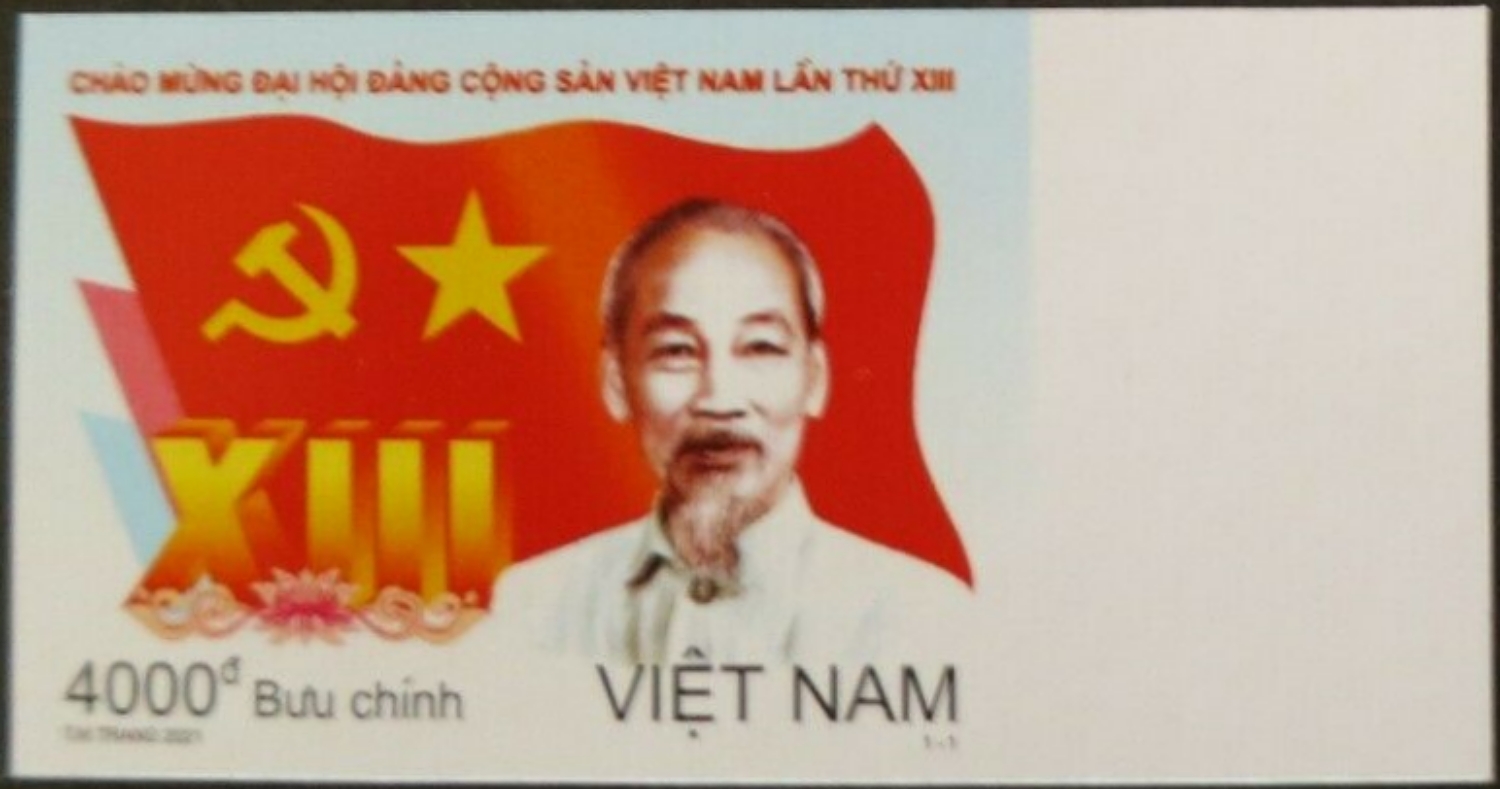 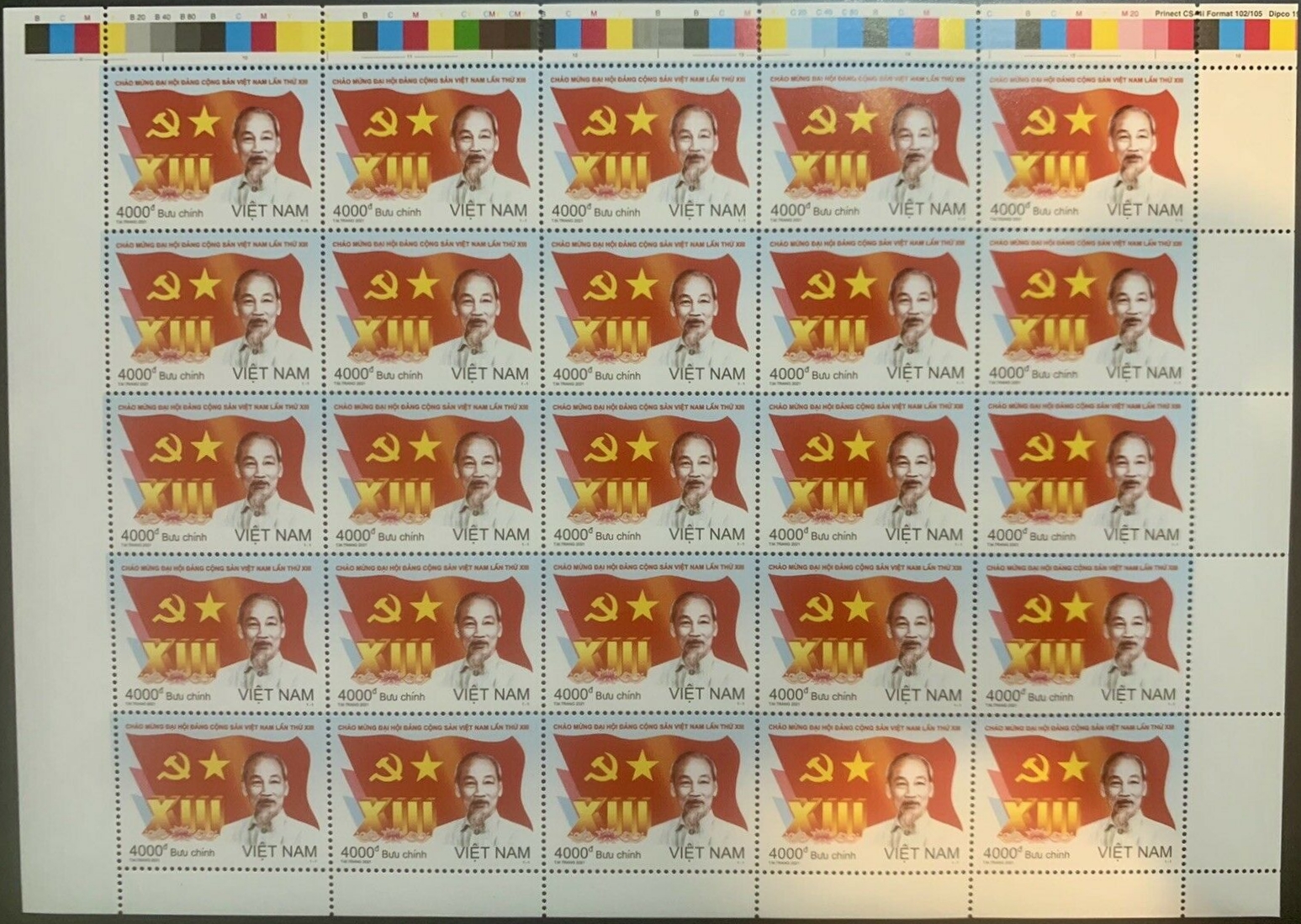 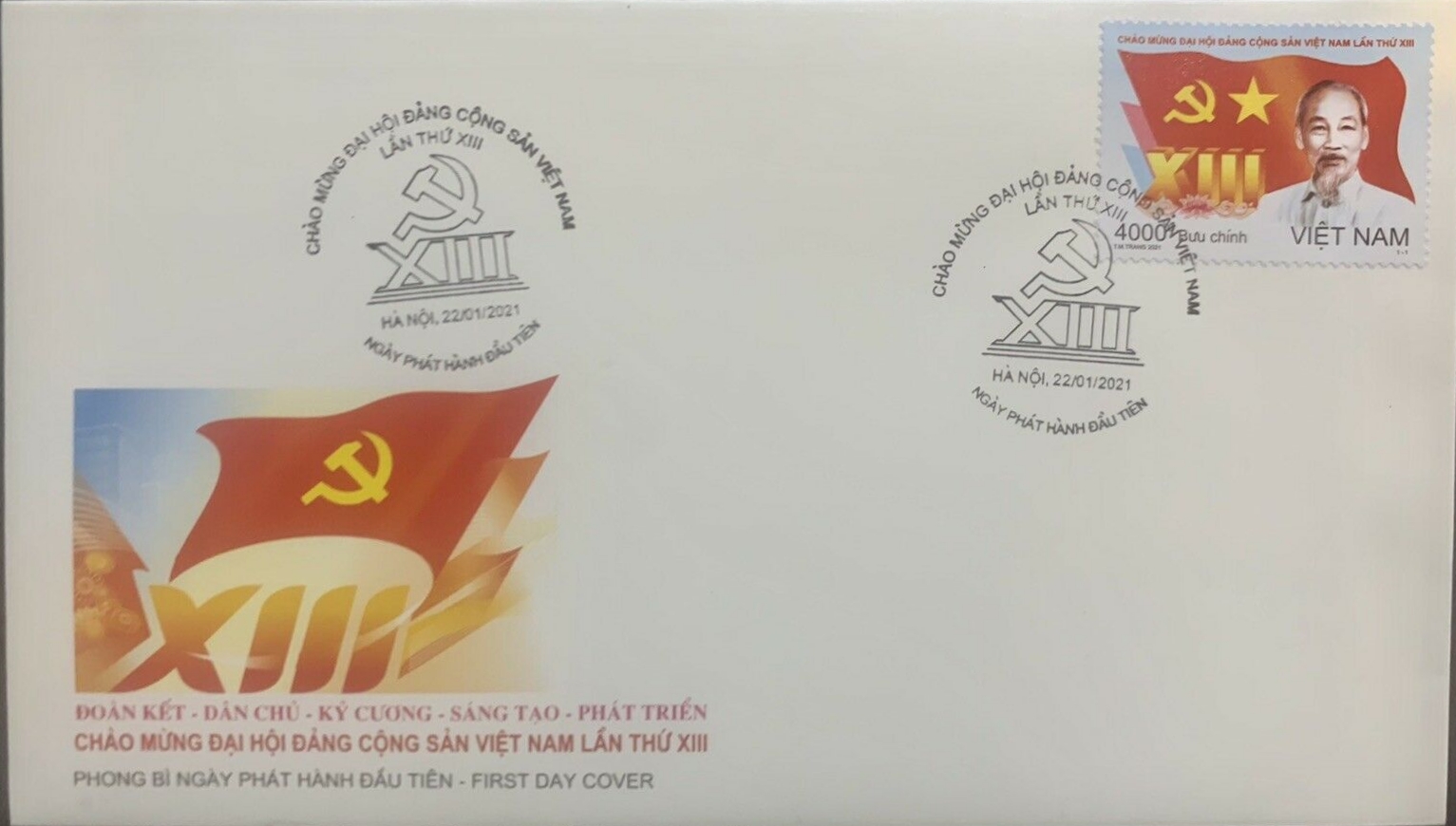 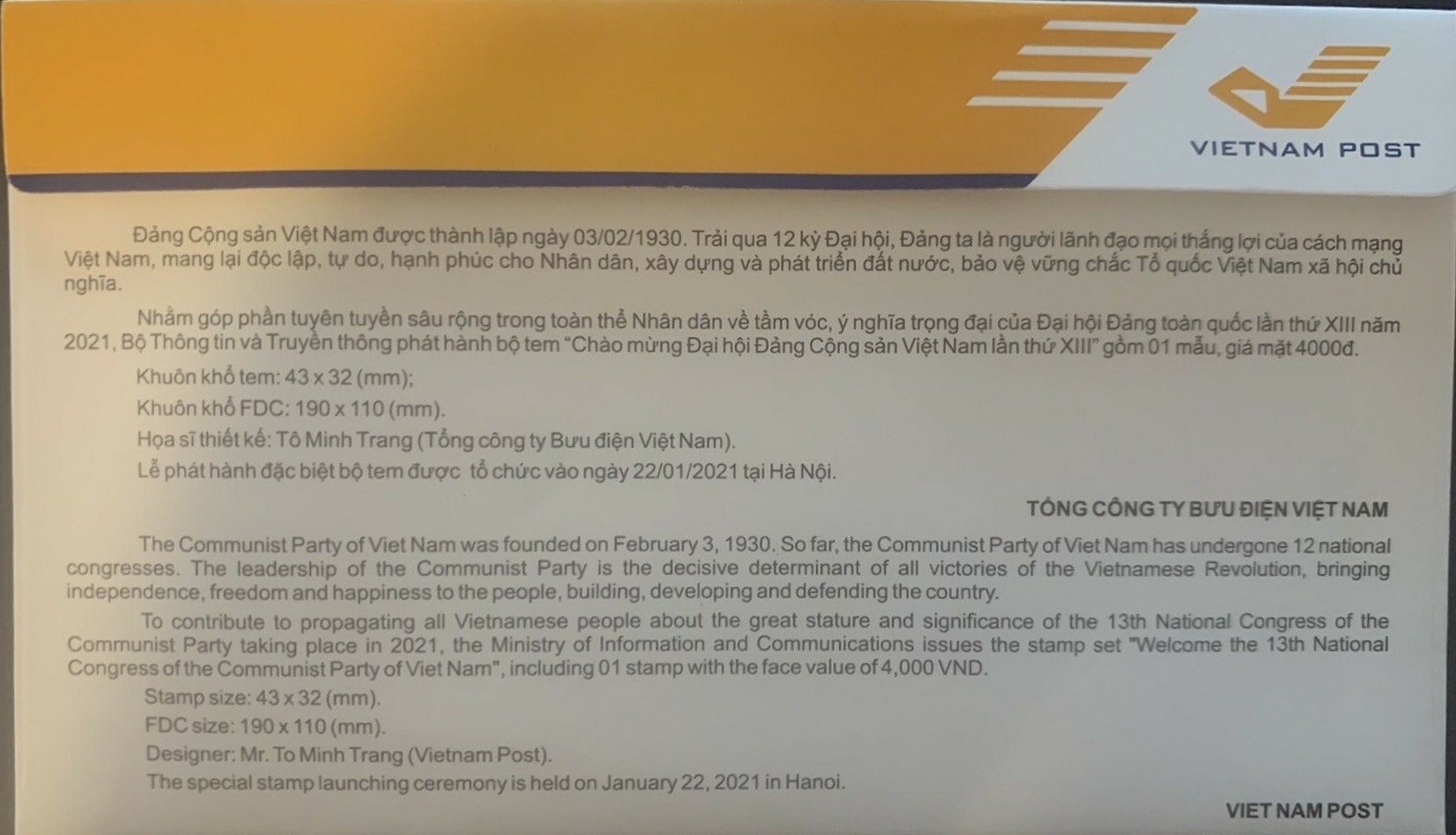 The Communist Party of Vietnam is organized according to the Leninist principle of Democratic centralism.

The supreme party organ is the National Congress, which has been held every five years since 1976. Due to war footing during the time of wars against France and the United States, the first four congresses were not fixed according to a common time schedule. Since the Foundation Conference, 12 national CPV congresses have been held. 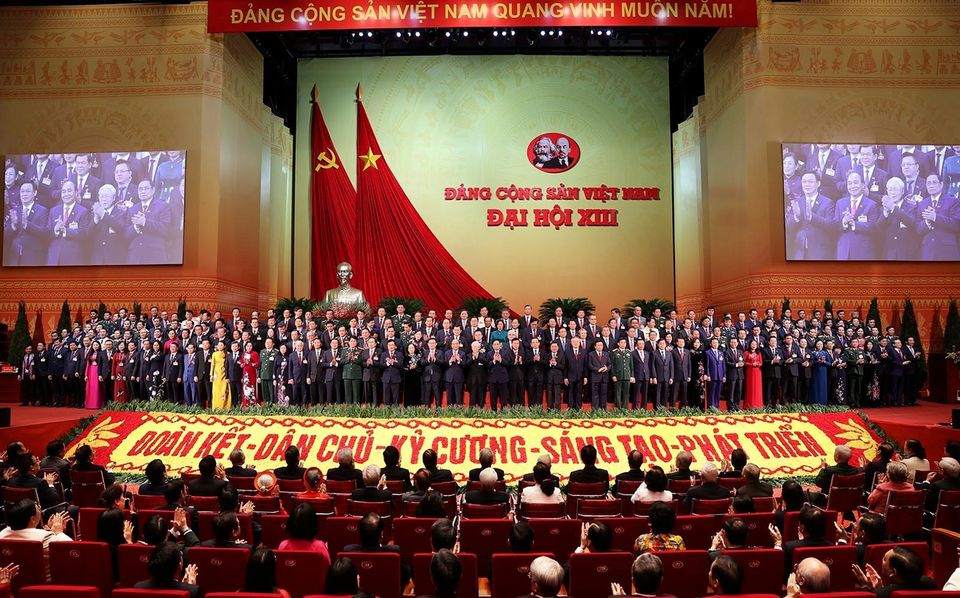 THE 13th National Party Congress of the Communist Party of Vietnam (CPV) was held in Hanoi from January 26 to February 1, 2021 with the theme: ‘Strengthening the building and rectification of the Party and the political system into purity and strength; rousing the will and determination for national development and promoting the strength of the great national unity bloc in combination with the power of the era; continuing to comprehensively and synchronously accelerate the cause of reform; constructing and firmly safeguarding the Fatherland and maintaining a peaceful and stable environment; and striving to turn Vietnam into a developed, socialist-oriented nation by the middle of the 21st century’.

The Congress opined that the Party had ‘successfully realised many guidelines, targets and tasks set’ in the last Party Congress and in the 10-year development strategy document. These signify the experiences gained by the Party in the implementation of the Doi Moi (renewal policy), which is now 35 years old. The Congress also noted that in spite of all these achievements and successes, there also remain ‘shortcomings and weaknesses which need to be addressed in the next five years to realise the aspiration of a powerful and prosperous Vietnam by 2045’.

Vietnam is rated as one of the 10 countries recording the highest economic growth in 2020, with an average GDP growth rate of 5.8 percent in the past five years. It had also witnessed progress in the fields of socio-culture, health, education, and science and technology. Poverty rate was brought down from 10 per cent in 2015 to 3 percent in 2020. The average per capita income, which was 100 US dollars in 1986 (the year Doi Moi policies were introduced), rose to $2,750 in 2020.

The achievements of the country are stupendous, particularly in the year 2020, where the Covid-19 pandemic had huge impact and together with the unprecedentedly serious floods and storms, caused serious socio-economic losses. The Congress noted that it is due to “the strength of the great solidarity and the superiority of the socialist regime, the concerted, resolute and effective engagement of the entire political system under the leadership of the Party, and the support from the people, Vietnam has gradually well controlled the pandemic; step by step recovered production and business; stabilised the life, thus helping consolidate people’s trust in the Party, State and the socialist regime”.

The Congress concluded that the Party should always retain its trust in Marxism-Leninism, Ho Chi Minh ideology and remain committed to the path of socialism. For this, the Party should ‘look straight at the truth, speak the truth’, continue on the path of ‘renewal, integration and development, bringing into play the tradition of solidarity, joint effort and will’. It had set out certain socio-economic development tasks, considering certain important milestones that the country would be observing in the coming few years. In 2025, it would be commemorating the 50th anniversary of the liberation of the South and national reunification, 2030 will be the centenary of the Party and 2045 is the centenary of the Democratic Republic of Vietnam, now the Socialist Republic of Vietnam. Considering these historic milestones, the Congress formulated a ‘national development and strategic vision’ for the new era’.

The Congress comprehensively reviewed Party building and the role of the leadership elected in the 12th Party Congress, decided upon the tasks of Party building for the next five years and assessed the implementation of the Party programme. It also elected members to the central committee evaluating them in terms of ‘political quality, revolutionary ethics, leading capacity, mettle and wisdom sufficient to meet the rising requirements of the renewal cause, and to direct the implementation of the great, heavy, but glorious missions assigned by the Party, State and people’.

The Congress later elected a Vote Counting Committee, and approved the lists of candidates to the 13th Party Central Committee (both official and alternative ones). In the afternoon, another Polit Bureau member, Secretary of the Party Central Committee Vo Van Thuong presented a report on the Presidium’s feedback on delegates’ discussions on documents submitted to the Congress. After delegates cast votes, the Vote Counting Committee counted them and announced the lists of official and alternative members of the 13th Central Party Committee.

The Congress elected a 200-member Central Committee, including 180 official and 20 alternate members, who in turn elected an 18-member Political Bureau and five members of the Secretariat, besides a number of members assigned by the Political Bureau. Nguyen Phu Trong was re-elected as General Secretary. The Congress also elected an Inspection Commission with 19 members.

The Congress concluded on February 1, after eight working days, with a special resolution adopted at the closing session. The resolution stated that the Congress agreed on the basic assessments of the implementation outcomes of the 12th National Party Congress’s resolution, the 1991 Platform on National Construction during the Transitional Period towards Socialism that was supplemented and developed in 2011, the 2011-2020 socio-economic development strategy, the 1991 Platform, the 35 years of ‘Doi moi’ policy, along with national development orientations and future tasks as noted in the documents submitted to the 13th Congress.

The resolution said the achievements during the past few years continue to affirm that the path to socialism in Vietnam matches the reality in the country and the development trend of the era, and that the Party’s clear-sighted leadership is the leading factor determining the success of Vietnam’s revolution.

“Amid fast and complicated developments in the global situation, the Party’s Platform remains ‘the flag of ideology, the flag of combat, the flag gathering the great national solidarity’ for the goal of rich people, strong nation and an equitable, democratic, and civilised nation”.

The resolution asserted that the Party will stay “committed to Marxism-Leninism and Ho Chi Minh’s ideology, continually apply and develop them in a creative manner that matches the reality in Vietnam in each period. It will also keep steadfast in the goal of national independence and socialism”.

The resolution stressed that the Party must enhance ‘Party building and rectification work to a strong and clean Party and political system, push ahead with improving its mettle and leadership and ruling capacity in making and carrying out guidelines and policies in a way that match the reality in Vietnam and the development trend of the era’. The Congress also pointed to the need to take timely action to address the ‘shortcomings in the leadership, direction, and organisation of implementation’.

“The success of the Congress will encourage the entire Party, people and army to continue overcoming all difficulties and challenges and bring into full play opportunities and advantages to soon turn Vietnam into a socialist-oriented developed country with high incomes”.

General Secretary of the CPV and President of Vietnam, Nguyen Phu Trong, in his concluding remarks pledged to exert “utmost efforts to surmount every difficulty to fulfill duties, uphold traditions and the obtained revolutionary achievements, join the entire Party and people to bring into play their glorious traditions and valuable experiences, enhance solidarity and unanimity, promote the consistency between thought and action, continually make self-improvement of revolutionary virtues and ethics to unceasingly strengthen their political mettle and work capacity, and be determined to successfully implement the 13th National Party Congress’s resolution and meet the revolutionary cause’s requirements in the new period along with aspirations of the entire Party, people, and army”. He said the Congress, which wrapped up nearly two days earlier than schedule, completed all content and agenda items and thanked the Congress delegates for trusting and electing them to the lead the Party.

The Congress is a significant milestone as it identifies a vision towards the middle of the 21st century, striving for Vietnam to join the list of developed countries.