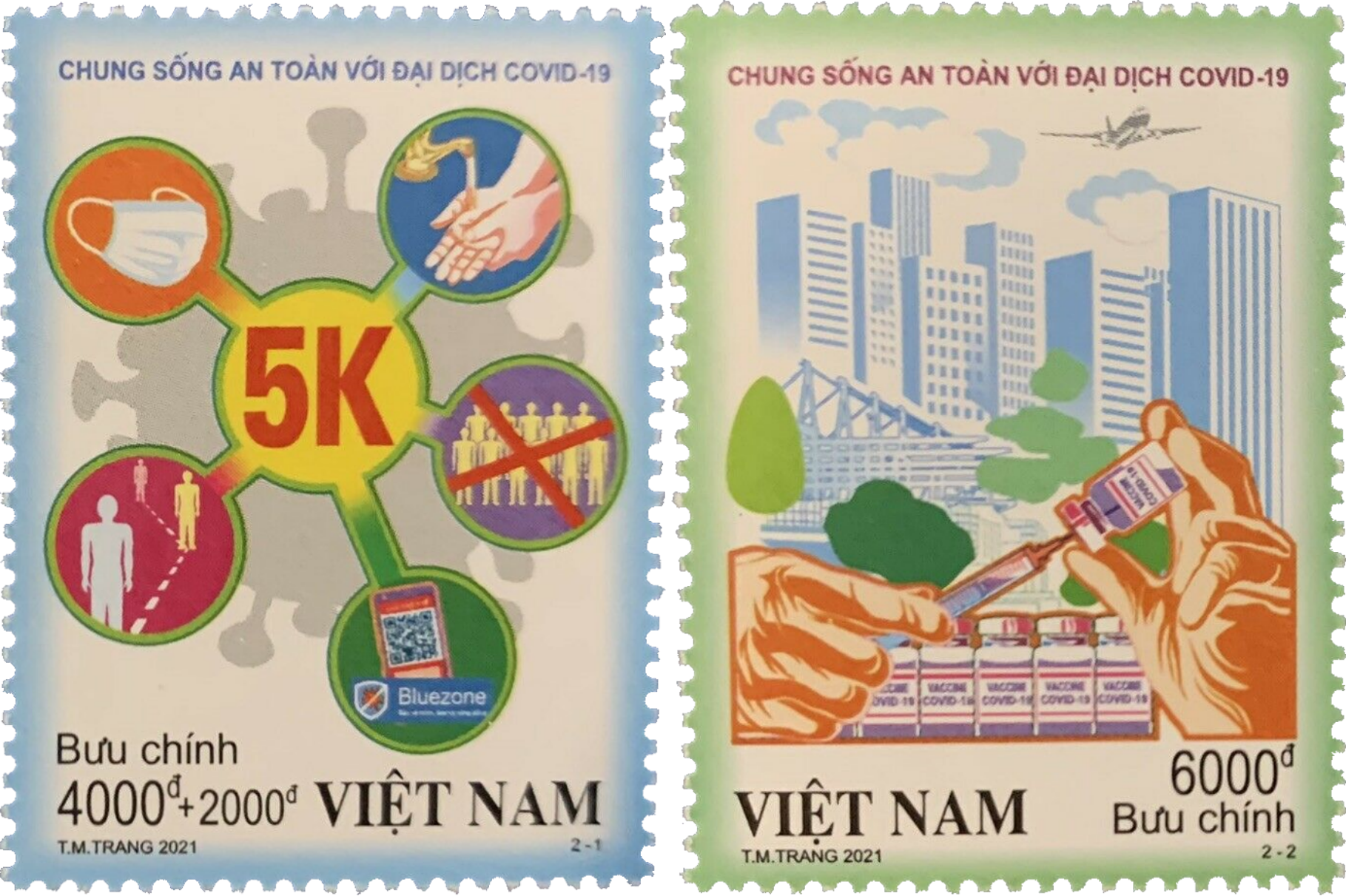 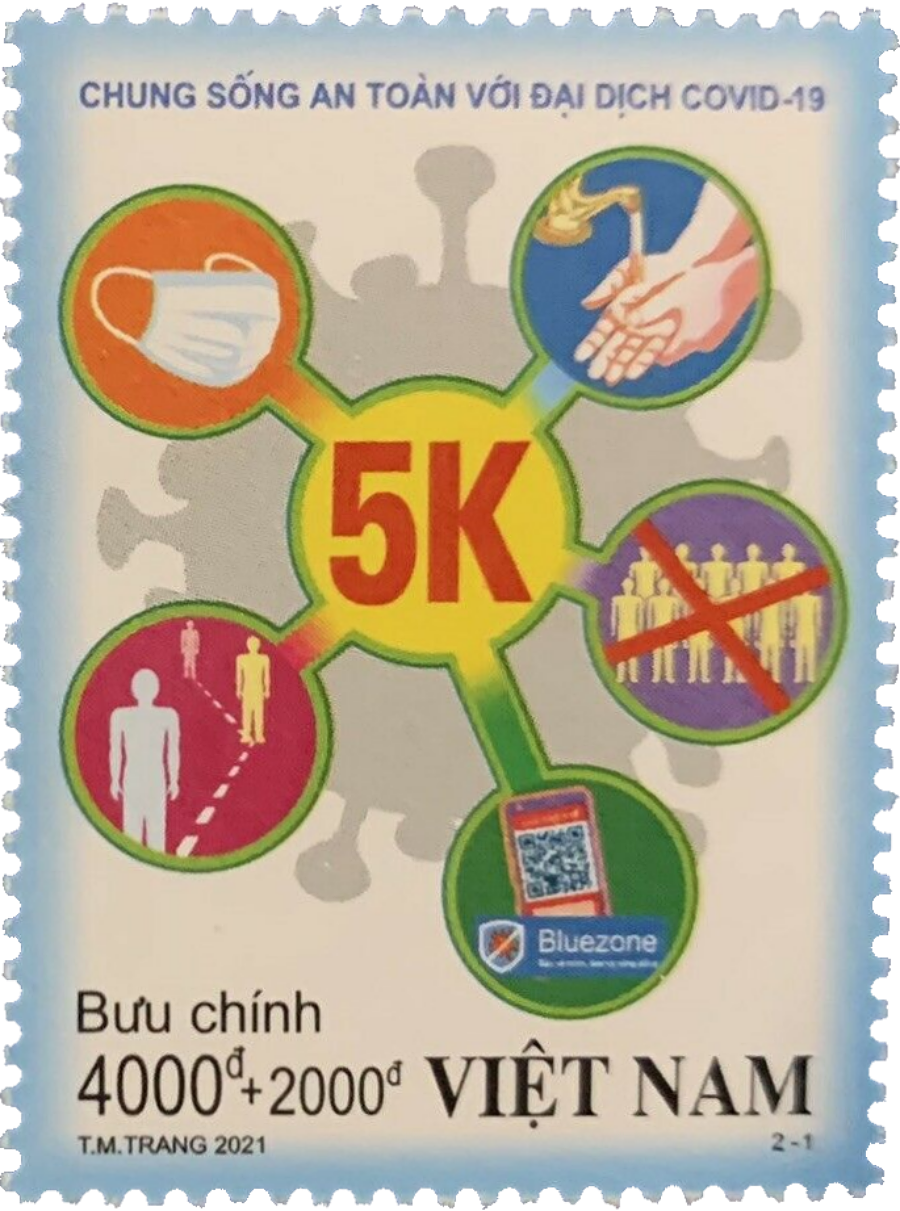 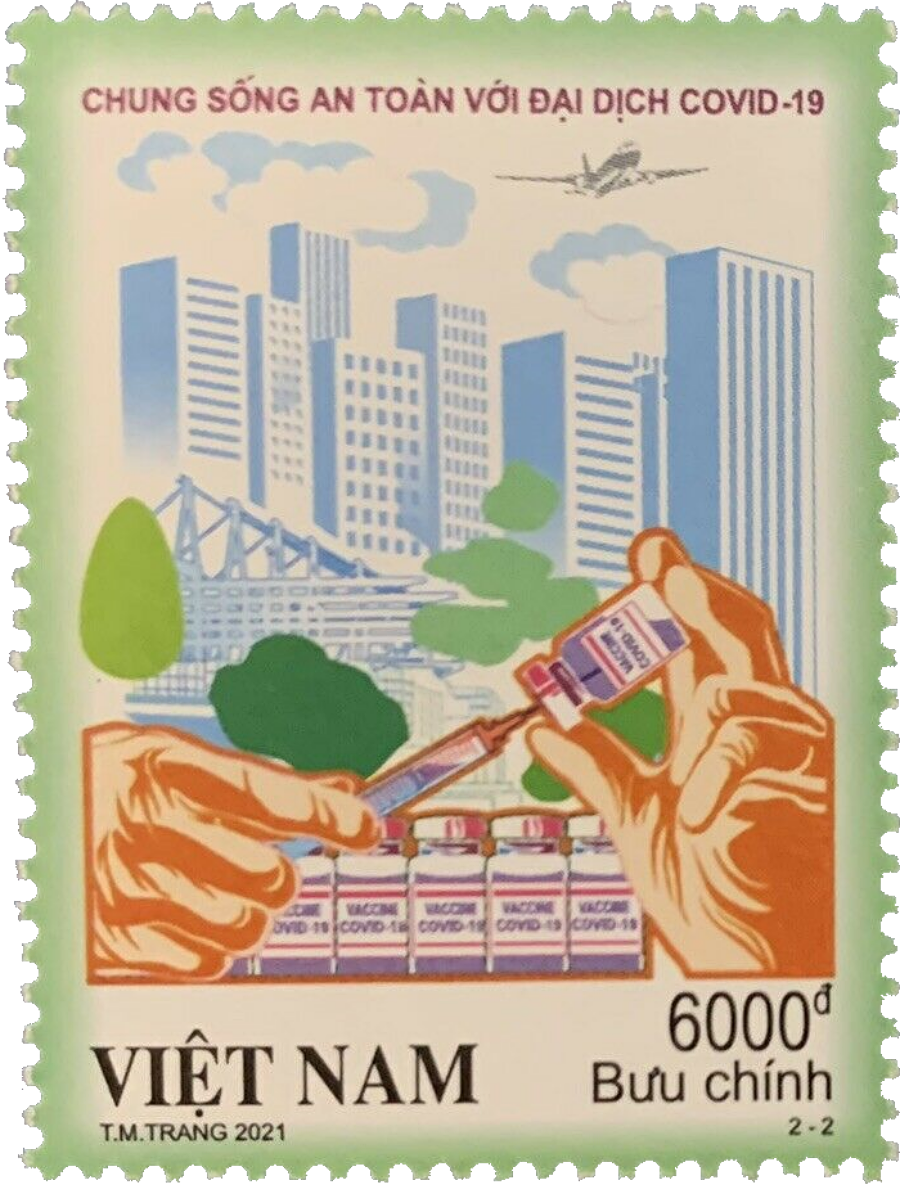 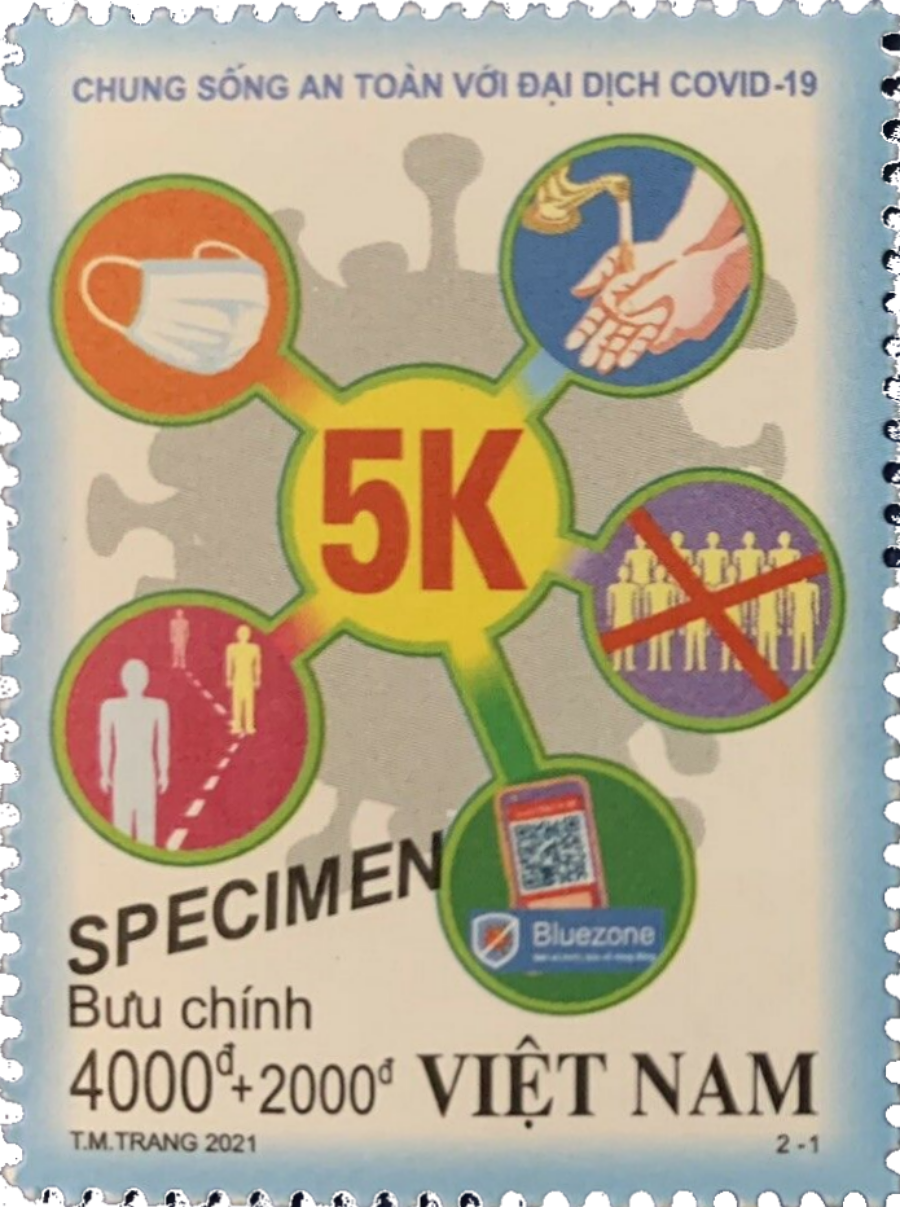 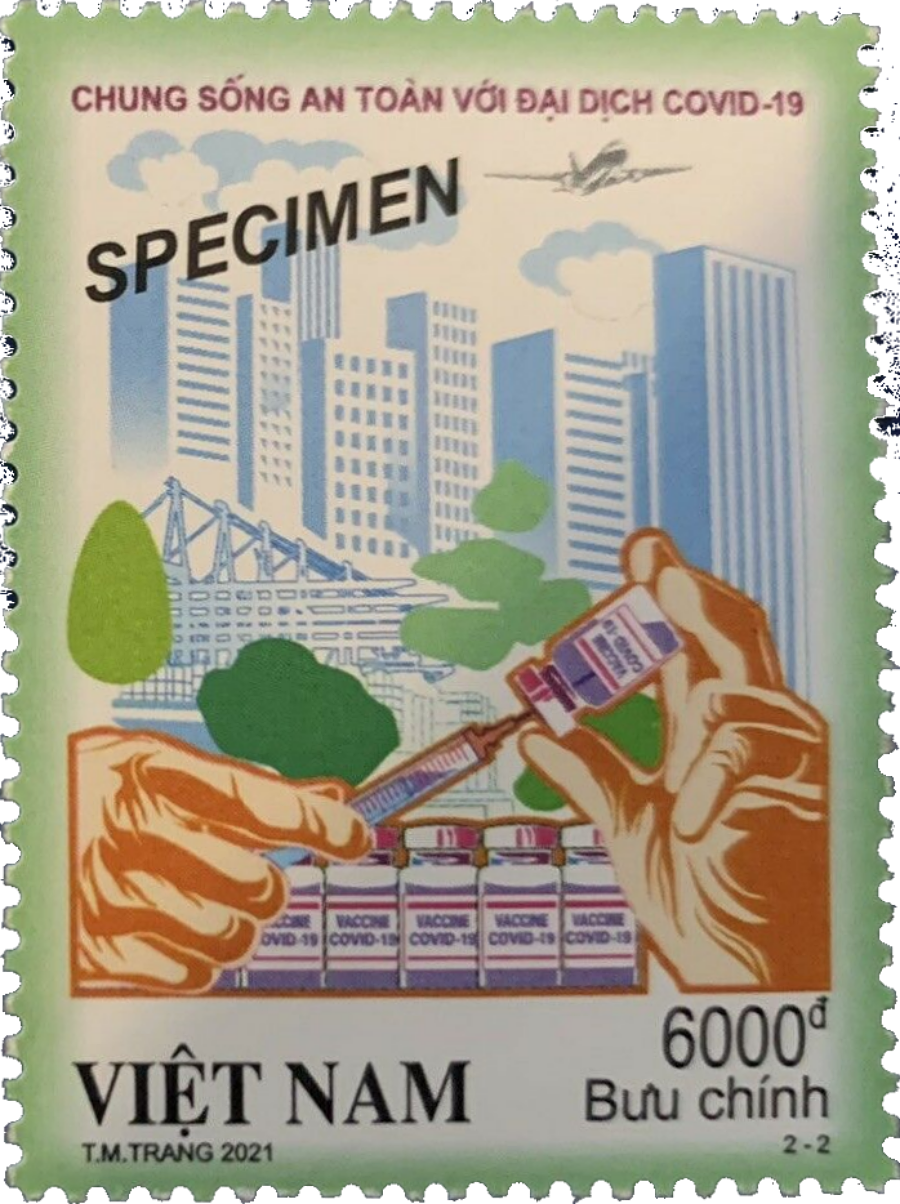 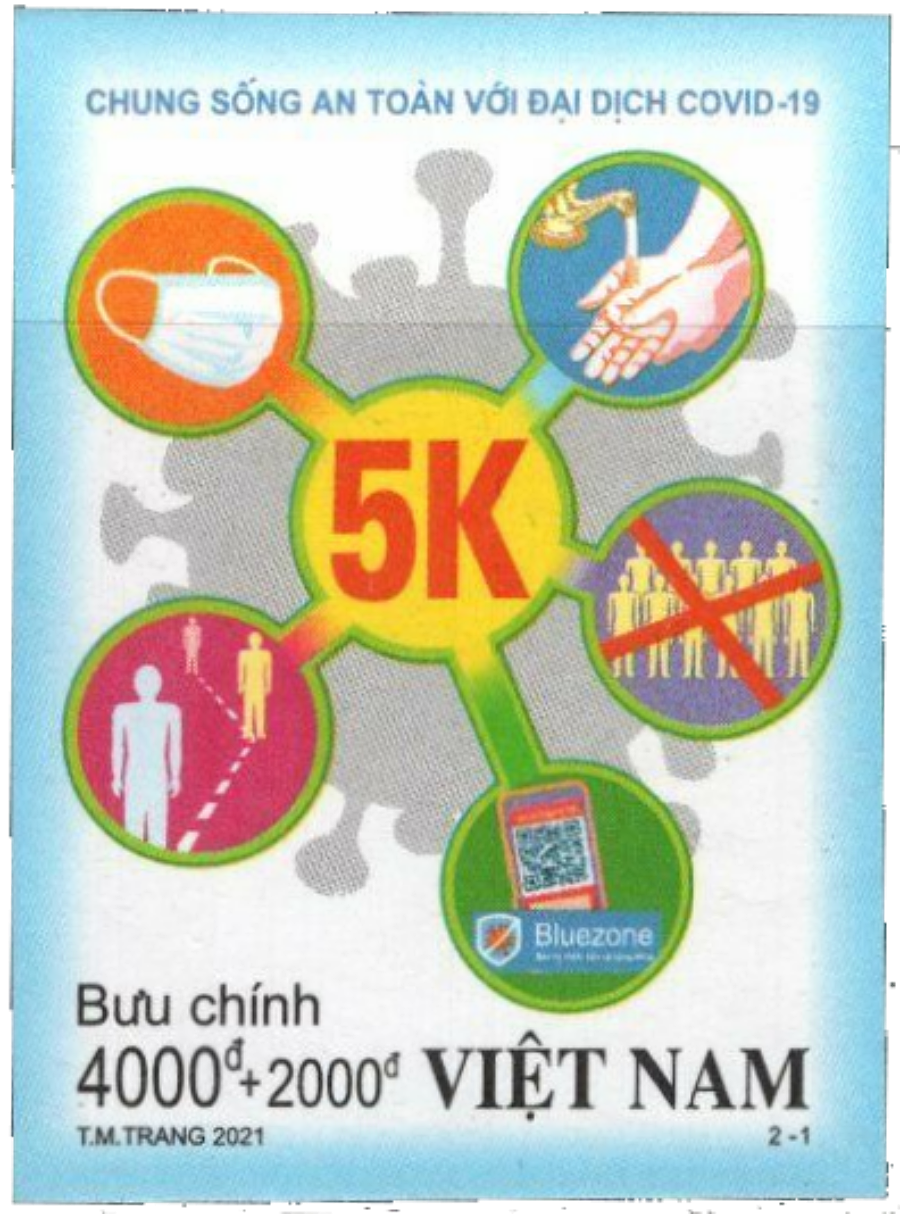 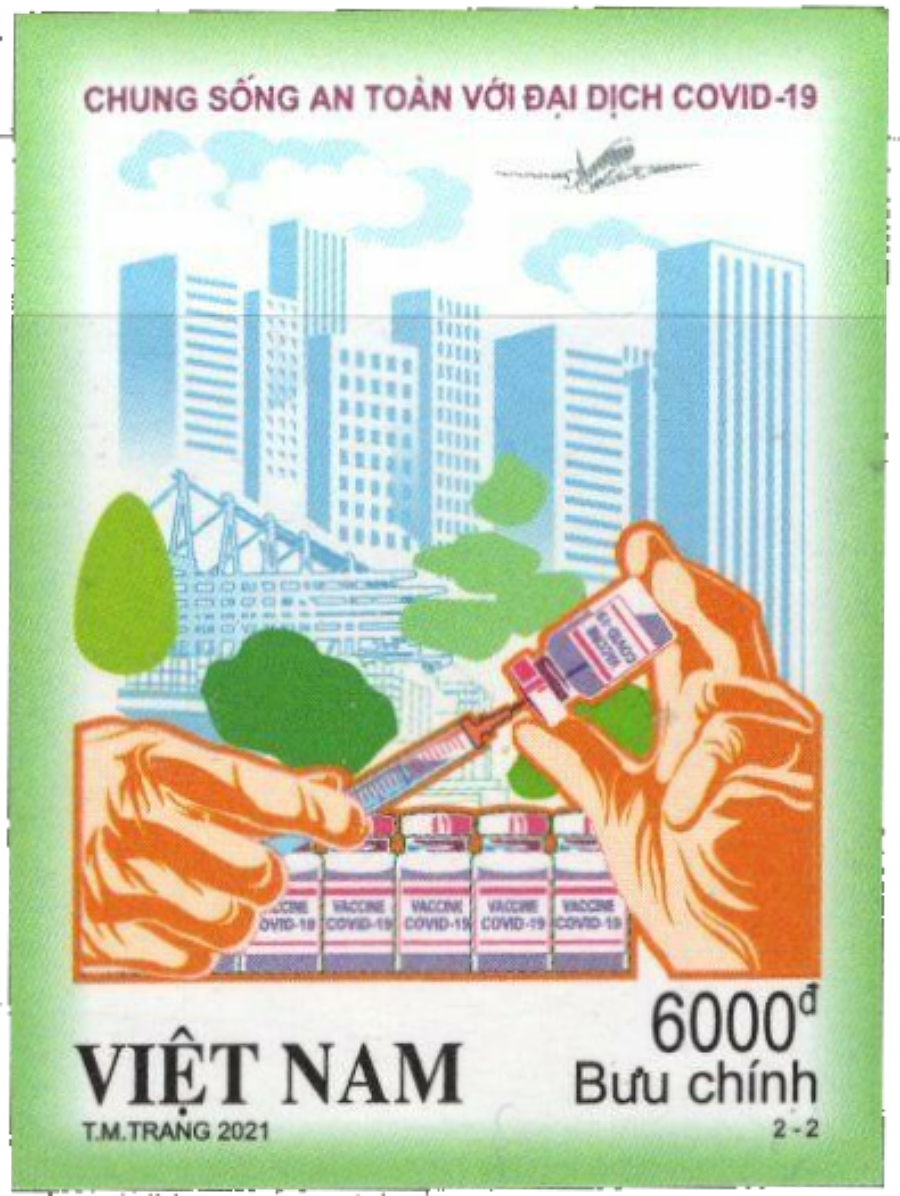 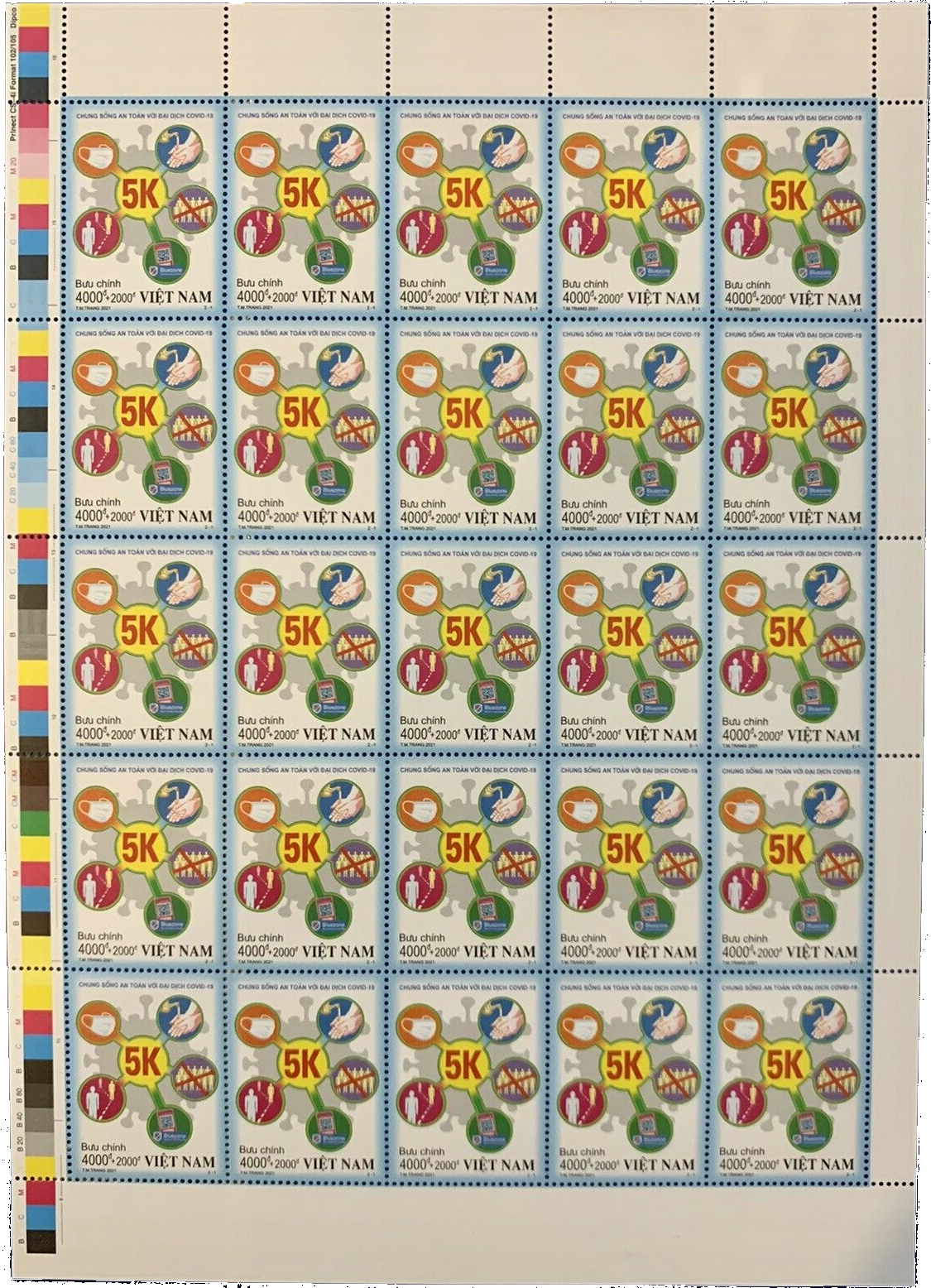 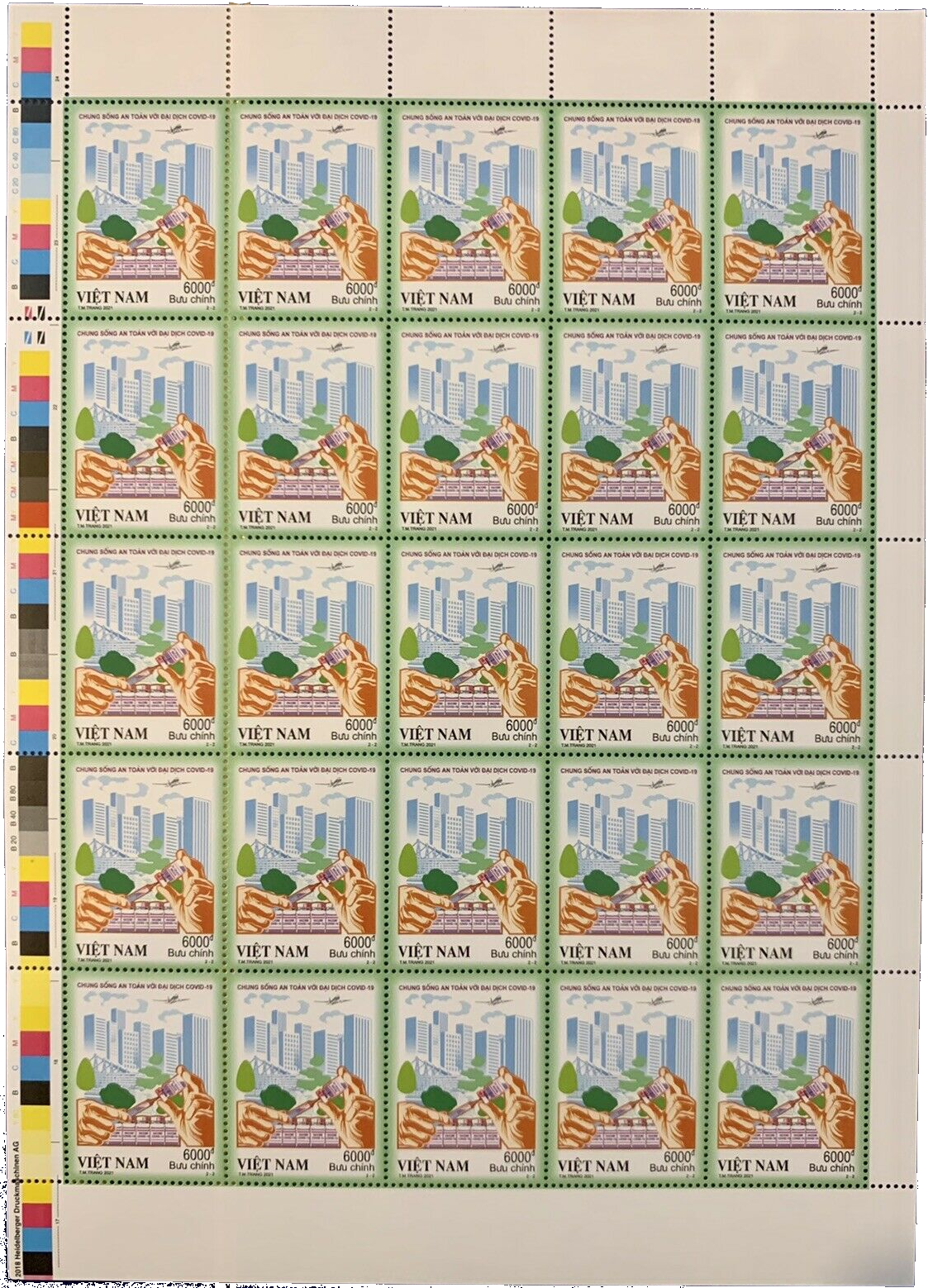 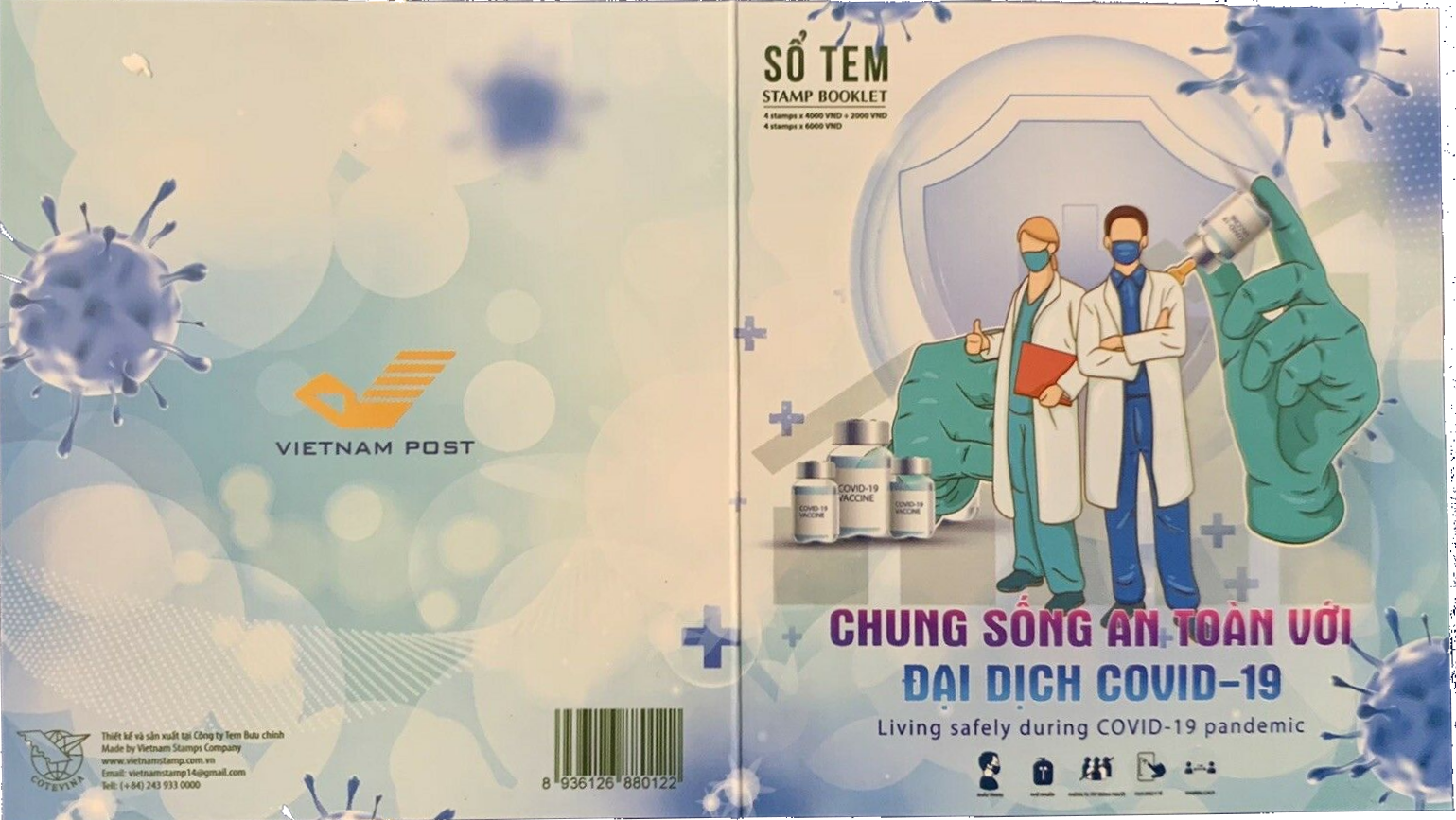 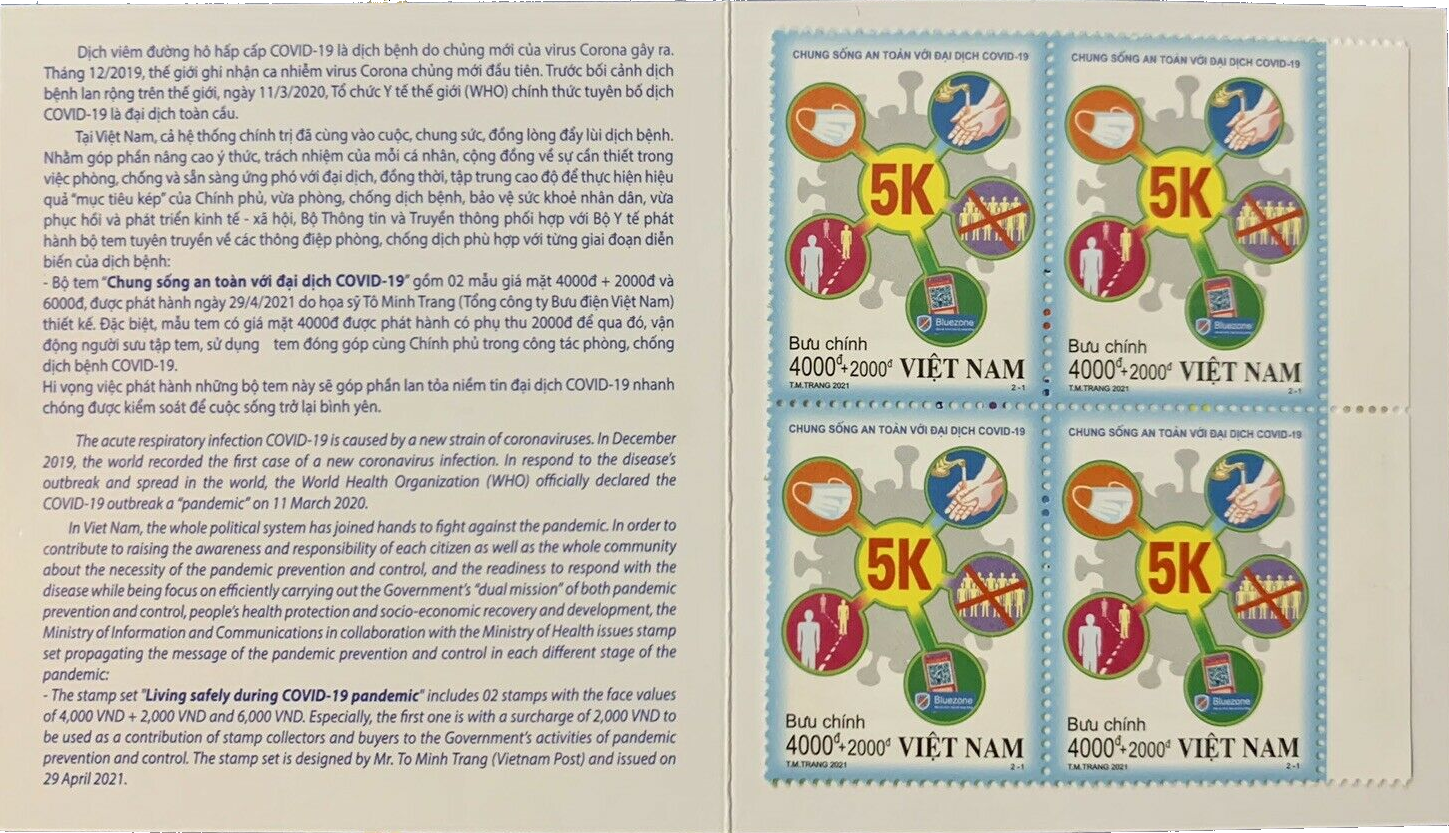 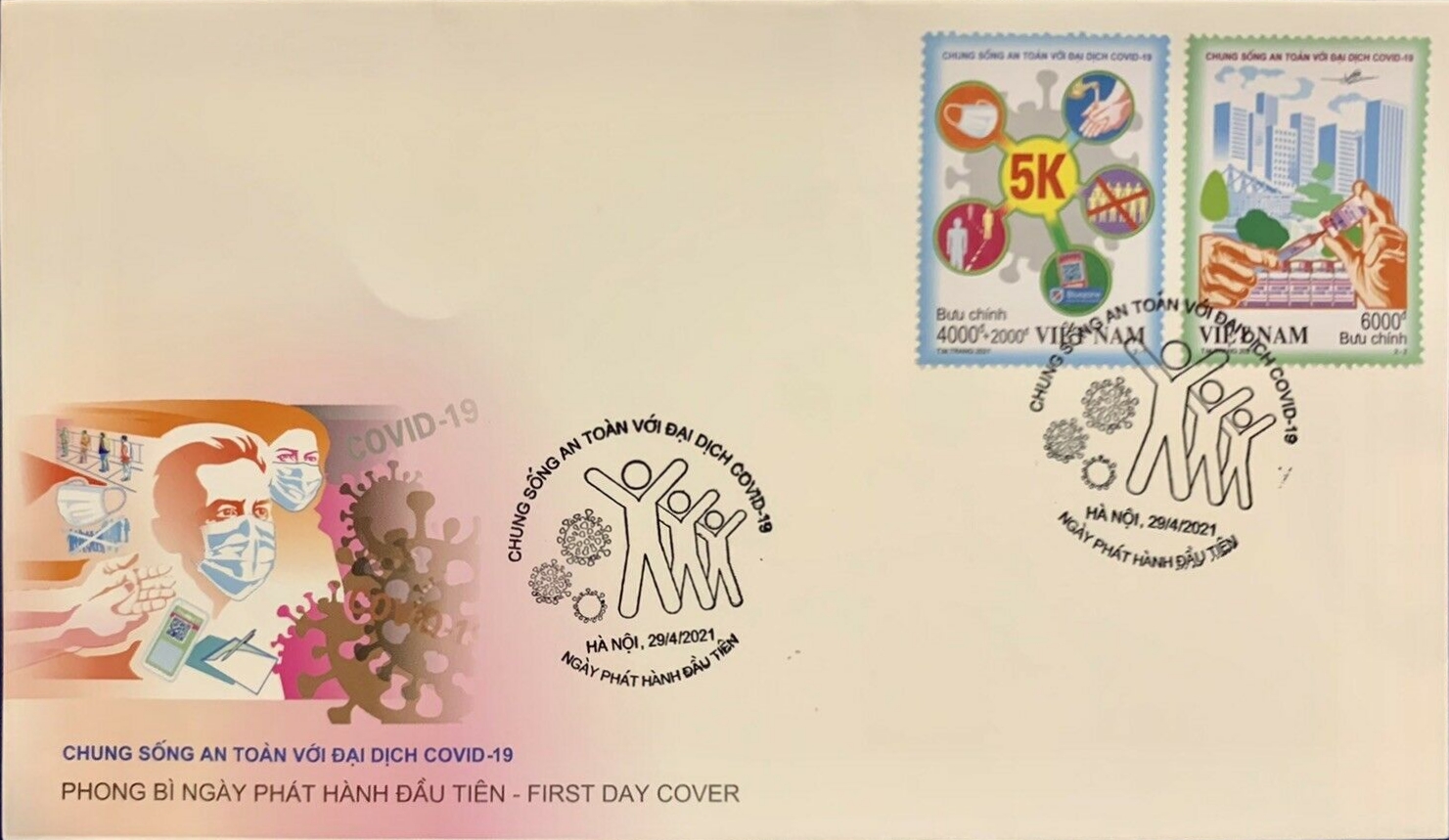 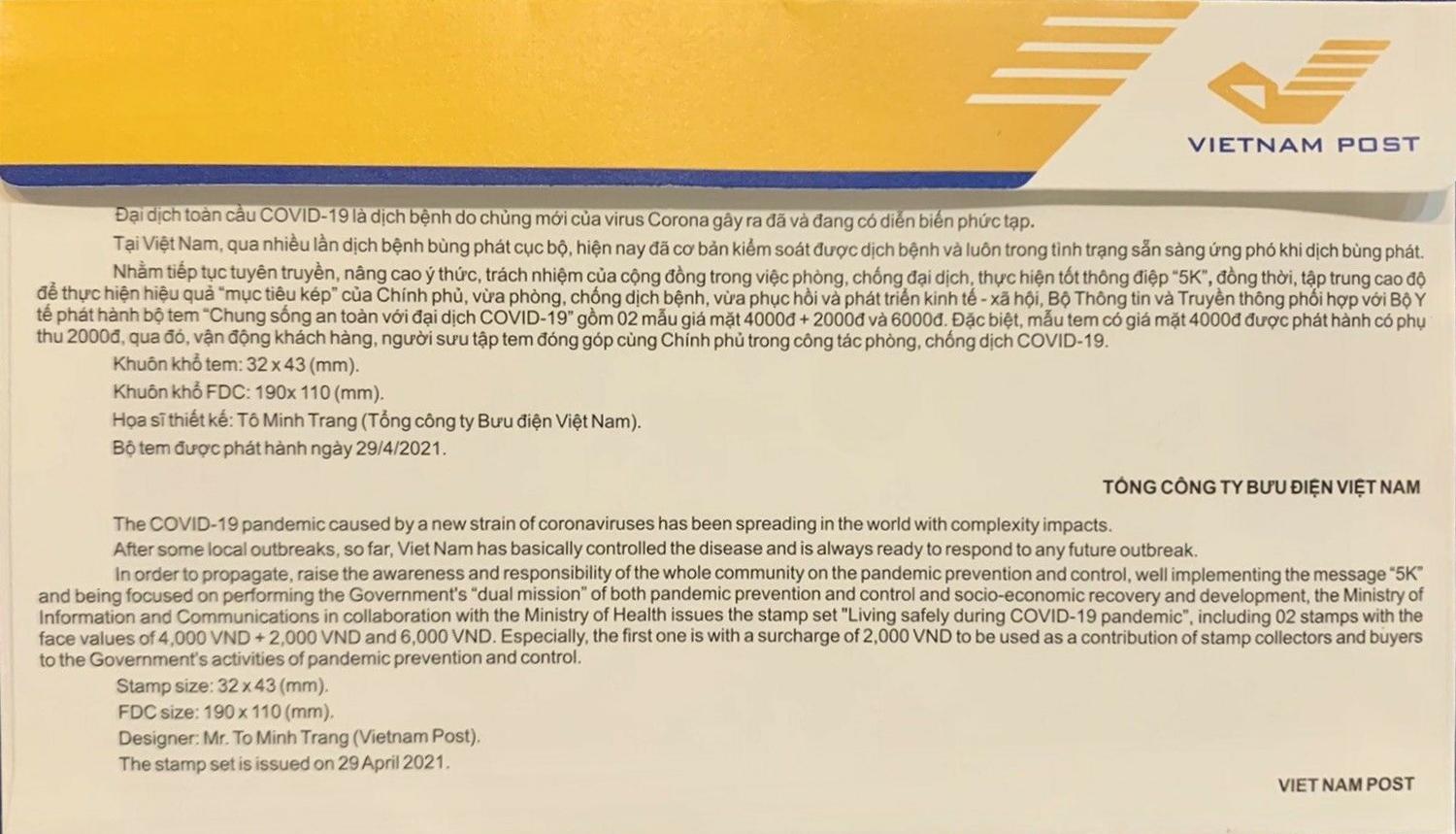 First Day Cover with all six varieties of this issue 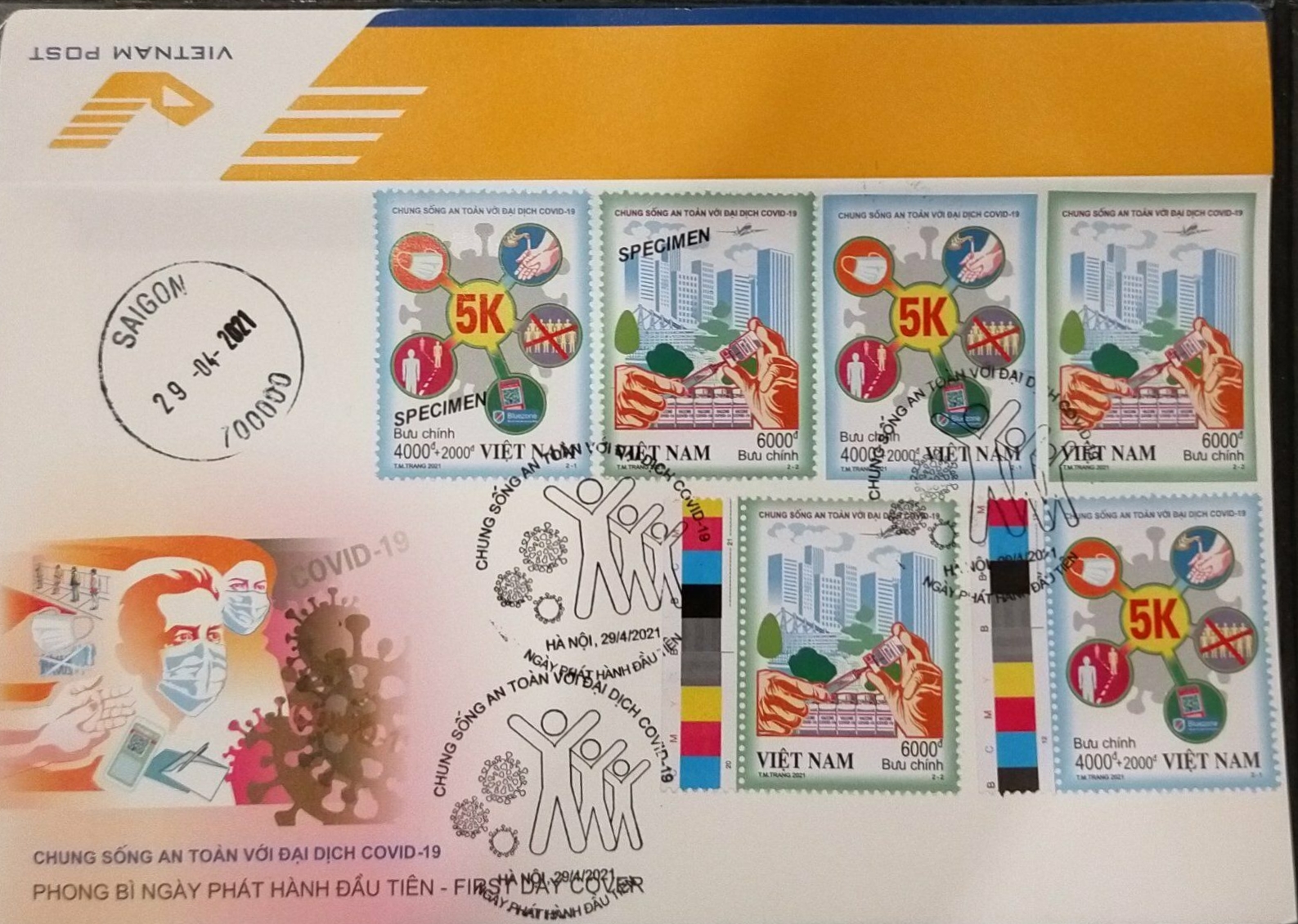 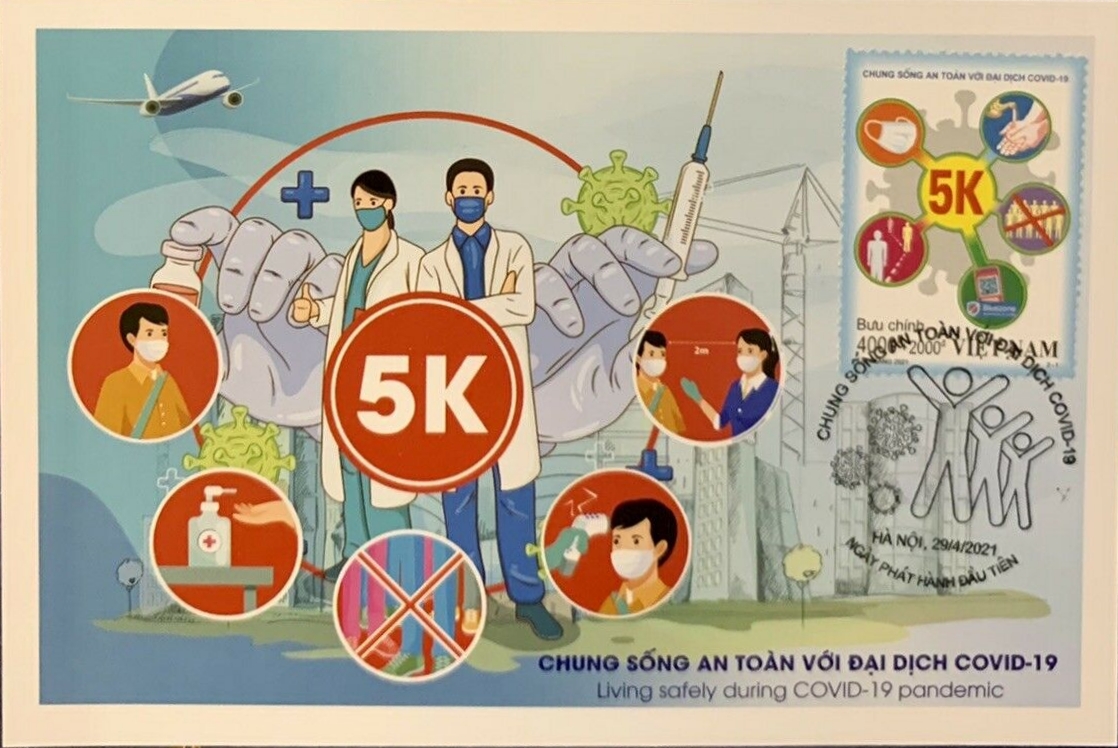 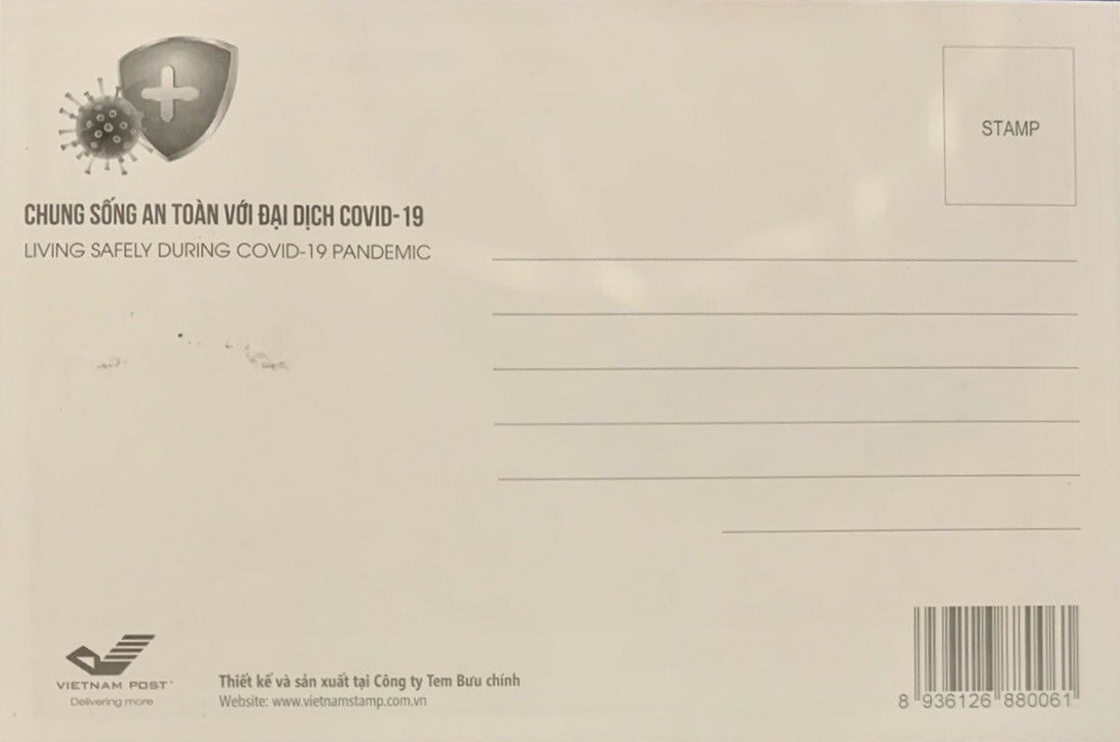 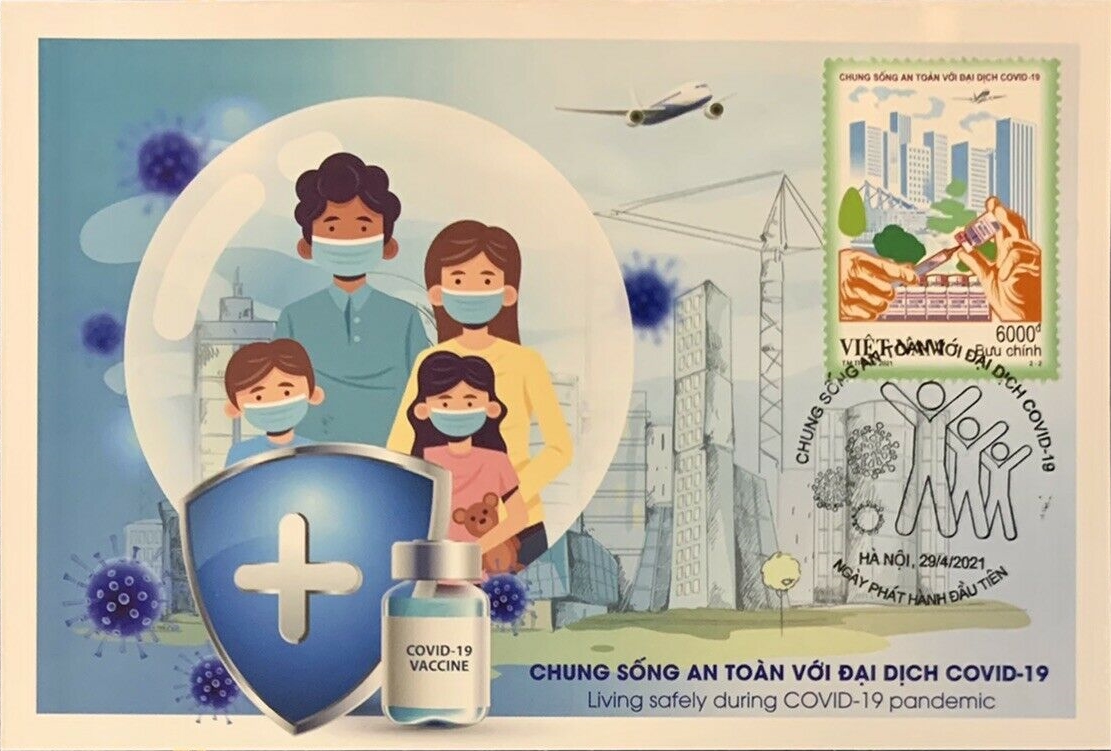 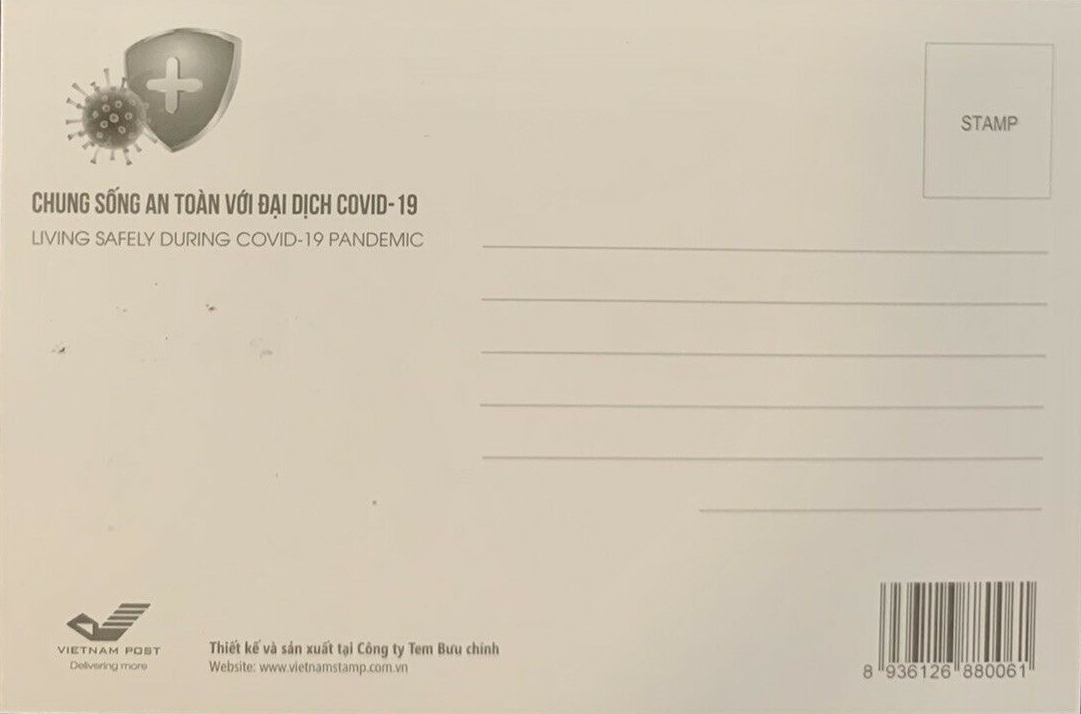 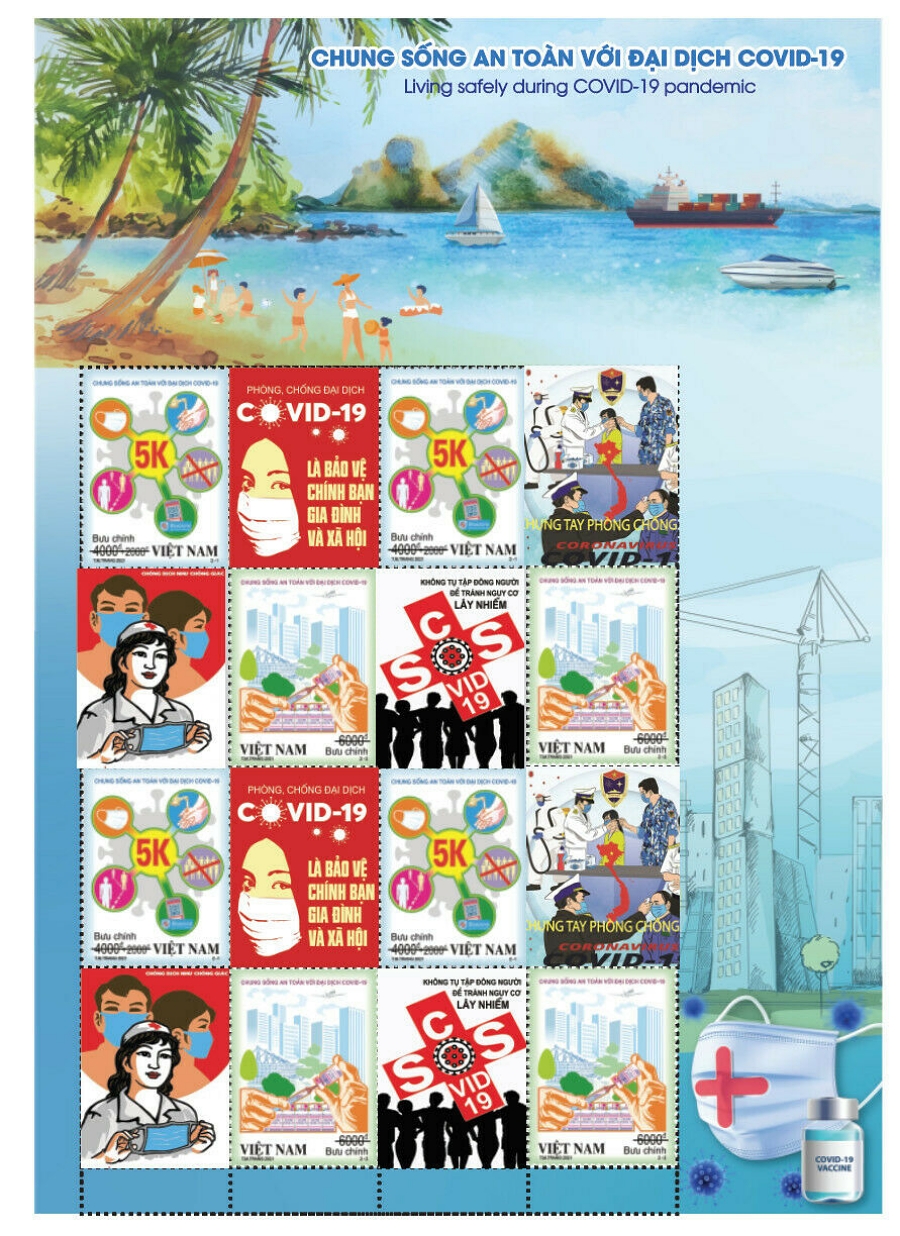 The COVID-19 pandemic caused by a new strain of coronaviruses has been spreading in the world with complex impacts.

After some local outbreaks, so far, Viet Nam has basically controlled the disease and is always ready to respond to any future outbreak.

The acute respiratory infection COVID-19 is caused by a new strain of coronaviruses. In December 2019, the world recorded the first case of a new coronavirus infection. In response to the disease’s outbreak and spread in the world, the World Health Organization (WHO) officially declared the COVID-19 outbreak a “pandemic” on 11 March 2020.

The stamp set “Living safely during COVID-19 pandemic”, including 02 stamps with the face values of 4,000 VND + 2,000 VND and 6,000 VND. Especially, the first one is with a surcharge of 2,000 VND to be used as a contribution of stamp collectors and buyers to the Government’s activities of pandemic prevention and control. The stamp set is designed by Mr. To Minh Trang (Vietnam Post) and issued on 29 April 2021.

The ‘5 Rules’ (5K) were launched by the Ministry of Health to help citizens live safely with COVID-19:

This is the second COVID-19 themed stamp issue by Vietnam Post. The first has a similar range of varieties (minus the personalized stamp sheet) and was released on 31 March 2020.  For more about these stamps as well as images, please visit the Philatelic Pursuits post here.

Vietnam has a history of successfully managing pandemics: it was the second country after China to face SARS and, after 63 cases and five deaths, it was the first country declared SARS-free by the World Health Organization (WHO). In the wake of the SARS epidemic, Vietnam increased investments in its public health infrastructure, developing a national public health emergency operations center and a national public health surveillance system, maintaining robust systems to collect and aggregate public data.

Since 2016, hospitals are required to report notifiable diseases within 24 hours to a central database, ensuring that the Ministry of Health can track epidemiological developments across the country. In collaboration with the US Centers for Disease Control and Prevention (CDC), Vietnam implemented an innovative “event-based” surveillance program in 2018, empowering members of the public, including teachers, pharmacists, religious leaders, and even traditional medicine healers, to report public health events, in order to identify clusters of people who have similar symptoms that might suggest an outbreak is emerging.

With a population of nearly 100 million people, receiving the millions of Chinese visitors each year, having long land border and strong economic ties with China, which is Hanoi’s largest trading partner, the country was initially perceived to be hit hard by the pandemic. When Vietnam recorded its two first confirmed cases on 23 January 2020, it was among the first countries affected by COVID-19. Two weeks later, only 150 cases had been reported outside of mainland China, but ten of these were in Vietnam, placing it in the top ten most affected countries. However, one year later the situation was very different: instead of having a large scale outbreak, Vietnam was one of the countries with the lowest cases and mortality per million inhabitants.

As of 17 May 2021, the Ministry of Health has officially reported 4,212 confirmed cases, 2,668 recoveries, and 37 deaths. Nearly 3.1 million tests have been performed. Hải Dương Province, as of May 2021 is the most-affected locale with 772 confirmed cases and no deaths.

The virus was first confirmed to have spread to Vietnam on 23 January 2020, when two Chinese people in Ho Chi Minh City tested positive for the virus. The first two confirmed cases were admitted to Cho Ray Hospital, Ho Chi Minh City, on 22 January — a Chinese man, born in 1954, and his son. The former had flown to Hanoi from Wuhan to visit his son who was believed to have contracted the virus from his father when they met in Nha Trang on 17 January.

The first cluster also appeared in Son Loi Commune, Bình Xuyên District, Vĩnh Phúc after a few workers returned from a business trip in Wuhan and infected other people in close contact with them. The Vietnamese government immediately locked down Bình Xuyên District until 4 March 2020 to prevent the disease from spreading all over the country. Having known cases early is one of the main reasons why Vietnam was successful in fighting the virus. For the first 16 cases of the disease, the medical staff had to treat different types of patients, including infants, the elderly and people with underlying conditions.

On 9 March, the health declaration application named NCOVI was officially launched. After installing NCOVI application on smartphones, people enter full personal information as required to start using. Based on the data submitted, the health system will know the cases that need attention to ensure the fastest and most effective medical assistance.

In April, Vietnamese cyber security firm Bkav launched Bluezone, an application that uses Bluetooth low energy positioning technology to detect people in close contact with infected people via smartphones quickly, and accurately. Smartphones with Bluezone installed can communicate with each other, record close contact at a distance of 2 meters, when and for how long to help users know and control patient contacts COVID-19. These app has drawn concerns about users information safety and their privacy. Gathering all citizens data in one place will make tracing disease easier and more efficient, but it also means that Bluezone, will know users contacted with whom, for how long, and when. From this information it can find out the social graph of the majority of people in the country.

Vietnam suspended the entry of all foreigners from 22 March 2020 until further notice to limit the spread of COVID-19. The measure did not apply to diplomats, officials, foreign investors, experts, and skilled workers. In January 2021, the government announced a stricter quarantine policy to “protect the country” during 2021 Lunar New Year. Everyone entering Vietnam needed to be isolated for at least 21 days at the government’s quarantine facilities while only special diplomats identified as such by the Ministry of Foreign Affairs would be exempt.

Vietnam is cited by global media as having one of the best-organized epidemic control programs in the world, along the lines of other highlights such as Taiwan and South Korea. This success has been attributed to several key factors, including a well-developed public health system, a decisive central government, and a proactive containment strategy based on comprehensive testing, tracing, and quarantining. Despite inferior economic and technological capacity, the country’s response to the outbreak has received widespread international acclaim for its immediacy, effectiveness and transparency, in contrast to censorship in China and the poor preparation in the United States and in European countries.

Although the pandemic has heavily disrupted the country’s economy, Vietnam’s GDP growth rate still remained one of the highest in Asia-Pacific Region, at 2.91% in 2020 and projected growth of 6.6% in 2021.

Vaccinations commenced on 8 March 2021, administering the AstraZeneca vaccine to medical workers in Hanoi, Ho Chi Minh City and Hải Dương province. This is the country’s ever-largest immunization campaign with over 110 million doses expected to be available by the end of 2021. The country is expected to reach its vaccination coverage target of 80% in June 2022.

Since the beginning of the pandemic, the government has communicated clearly with the public, setting up websites and telephone hotlines to update on the latest situations. The Ministry of Health also regularly sent out reminders to citizens via text messaging and apps during the crisis, as well as publishing extensive amounts of data and information about the outbreak. Messages on preventive measures such as wearing of mask and physical distancing have been reinforced using infographics and audio-visual materials. On a busy day, the national hotlines alone could receive 20,000 calls, not to count the hundreds of provincial and district-level hotlines. Wartime loudspeakers are also used to urge people to stay vigilant.

Vietnam is also relying on its propaganda apparatus to help tackle the COVID-19 pandemic. The Central Propaganda Department is responsible for disseminating the propaganda through mass media. Their efforts usually focus on the nationalism, successful measures by the government to control the pandemic, the steady improvement of the situation across the country and the advantages of the one-party political system in dealing with crisis. On the streets, public art in the style of Cold War-era propaganda posters has flourished, exalting nurses instead of guerrillas. The government and local media outlets have used the phrase Cuộc chiến với Covid-19 (War against COVID-19) to illustrate the efforts and sacrifices required to contain the pandemic.

Although Vietnam is a success story in disease prevention and has kept outbreaks under control, the country’s COVID-19 vaccination program is considered to be slower than other countries in the Asia-Pacific region. As of 16 May 2021, a total of 979,238 administered vaccination doses have been reported.

As of 17 May 2021, Vietnam recorded at least seven coronavirus strains: the original Wuhan variant, the UK variant (Lineage B.1.1.7), Indian variant, South African variant, A.23.1 from Rwanda, CAL.20C variant and D614G coronavirus mutation.