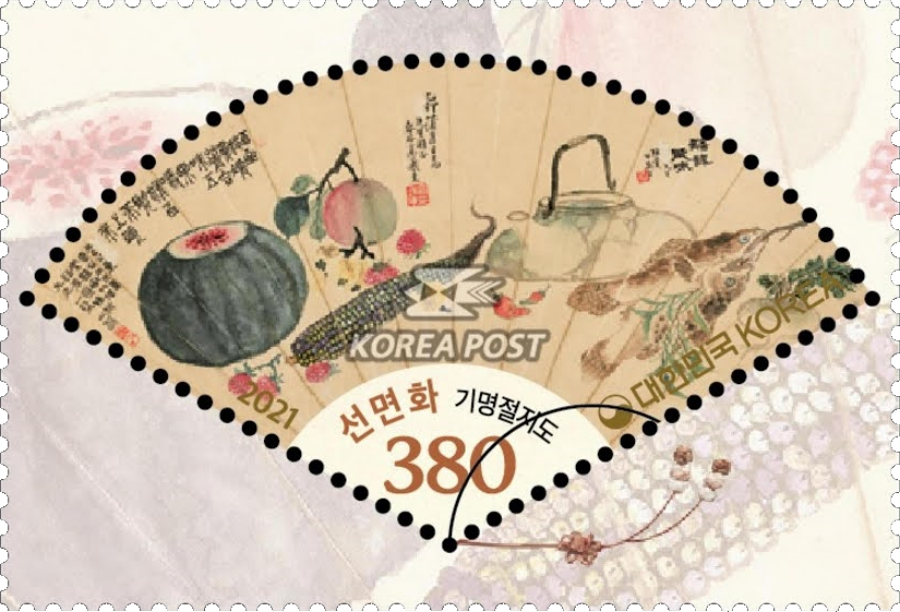 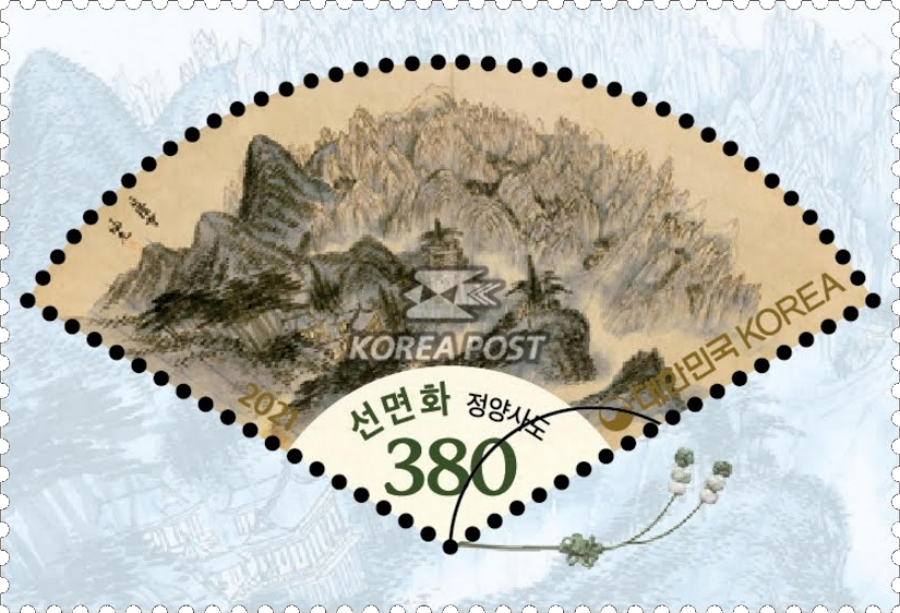 Design #3: Chatting Under Pine Trees by the Stream 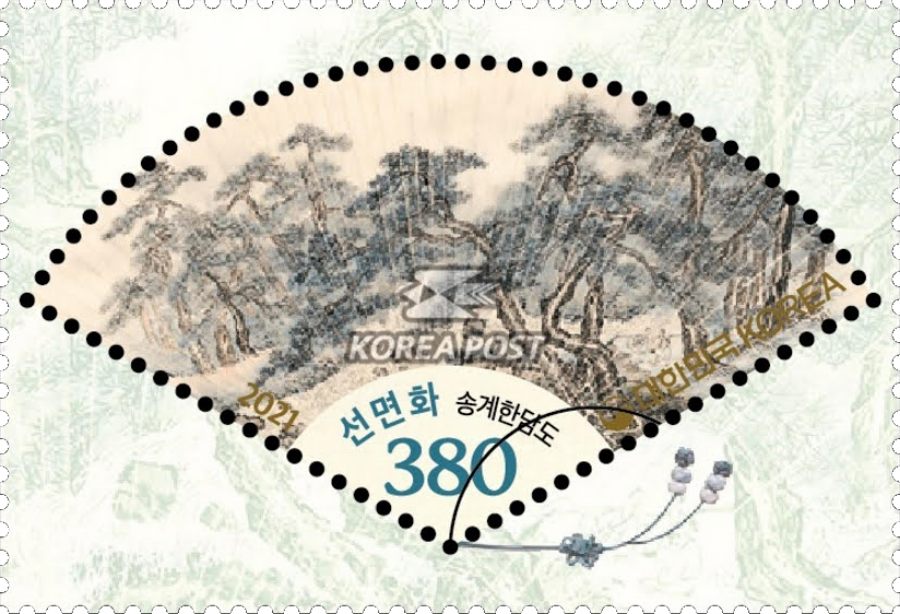 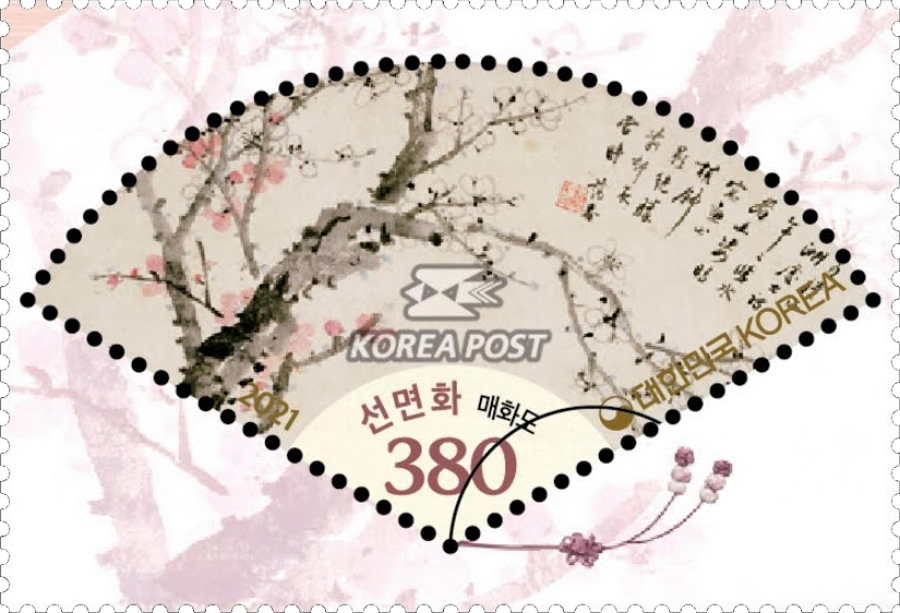 Design #5: Gazing at a Waterfall Under a Pine Tree 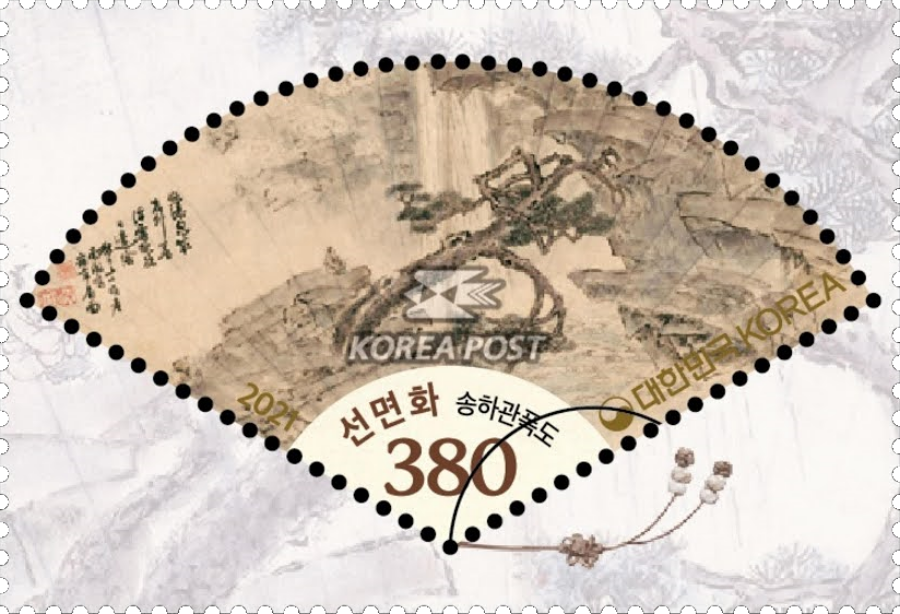 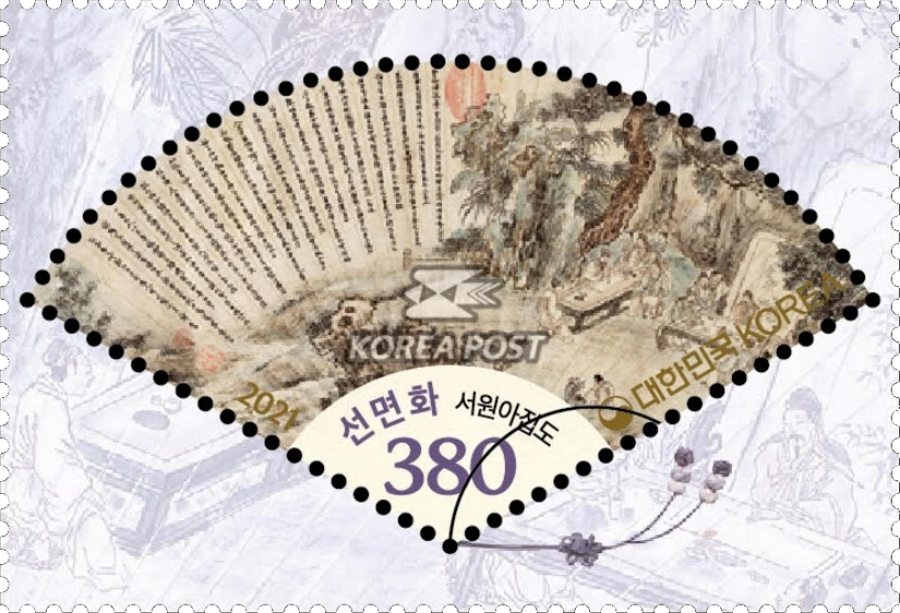 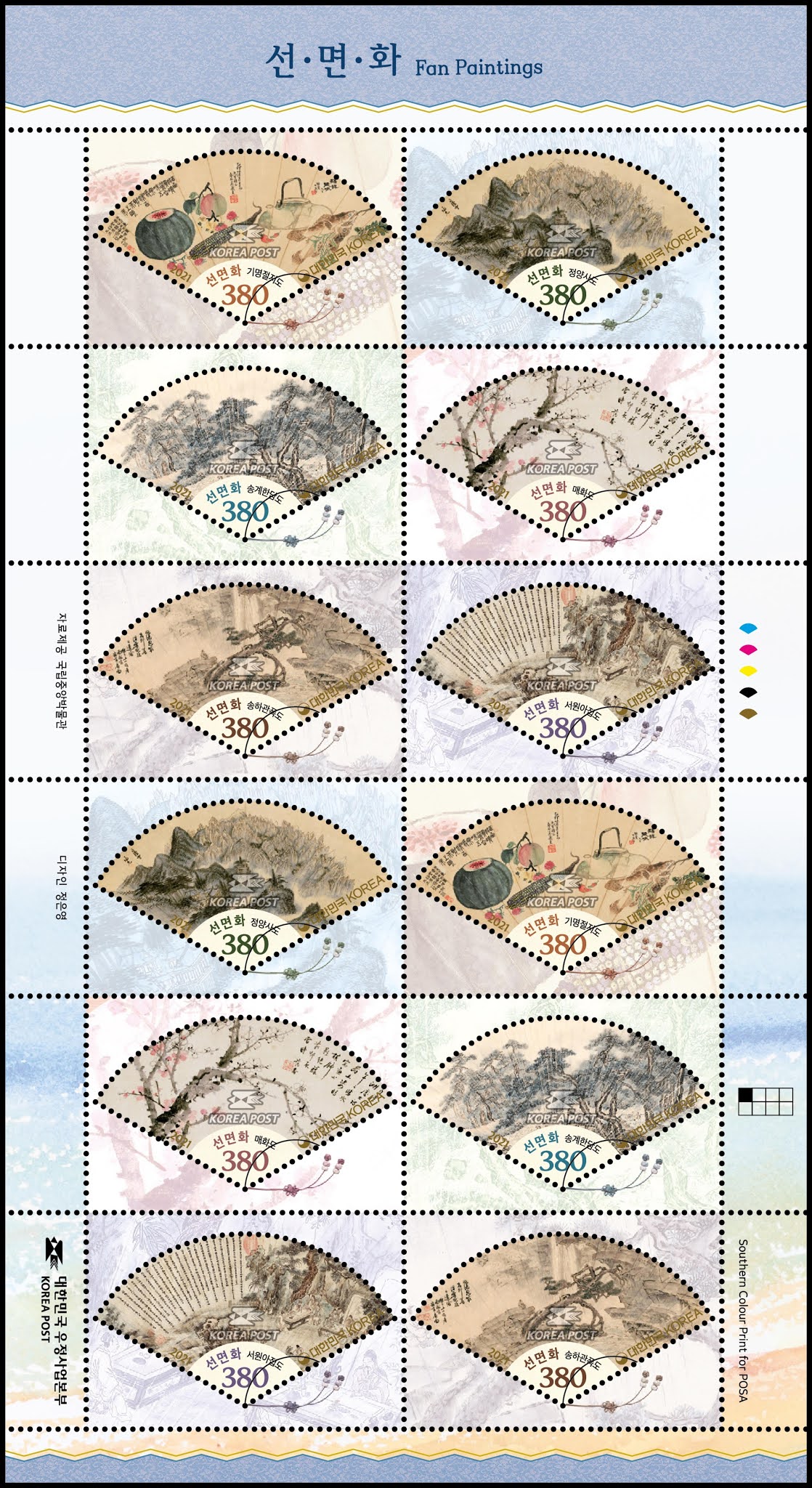 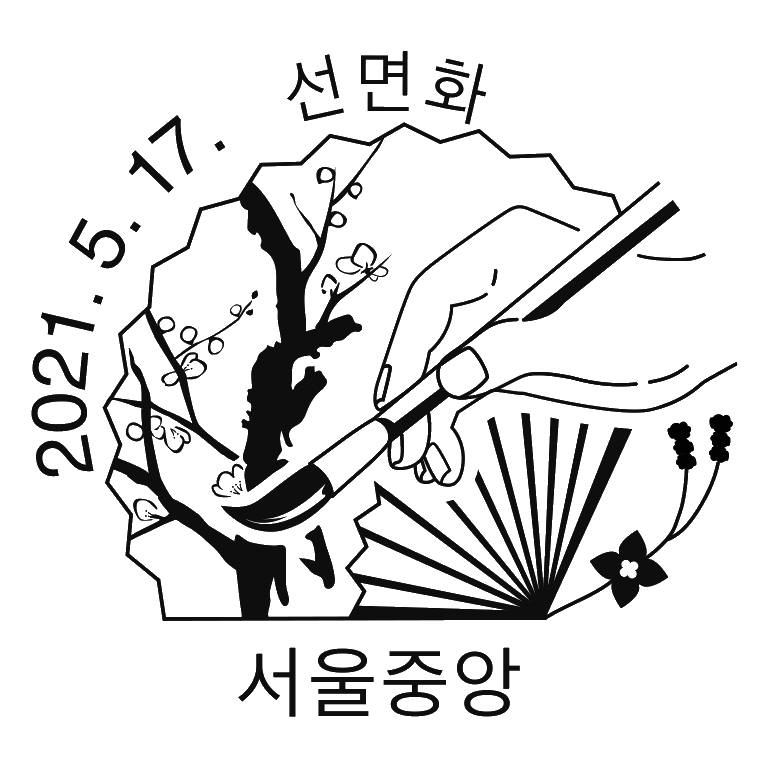 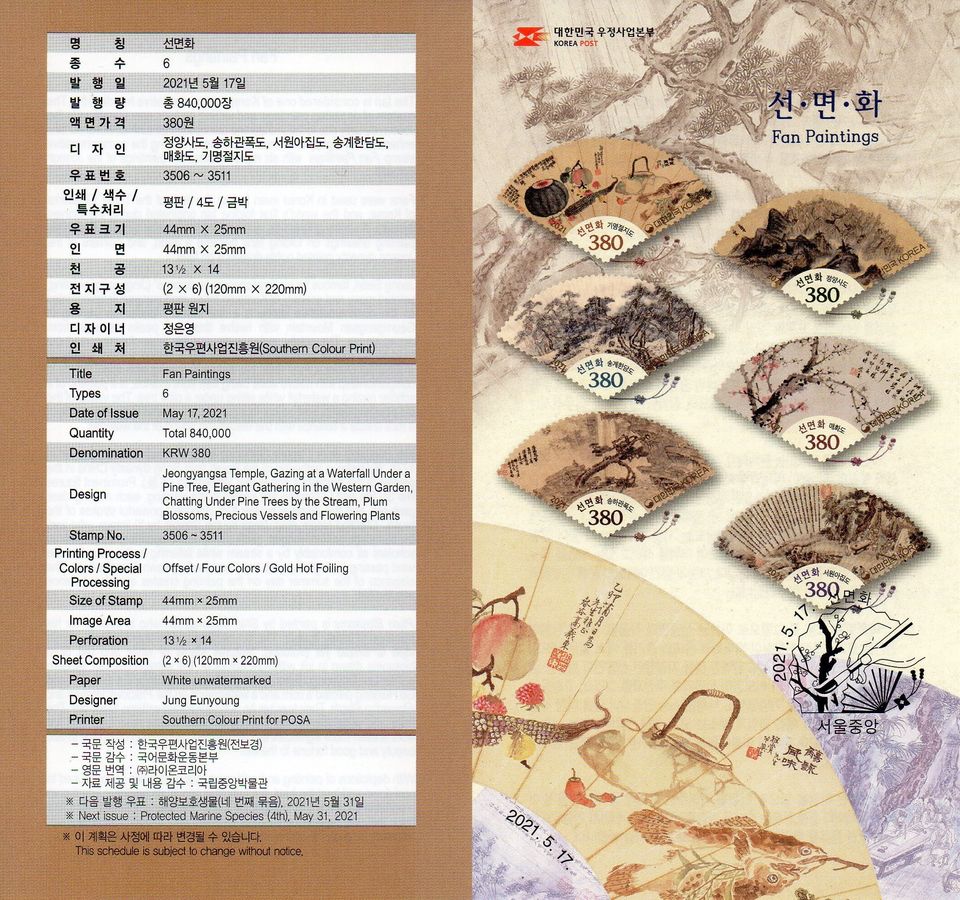 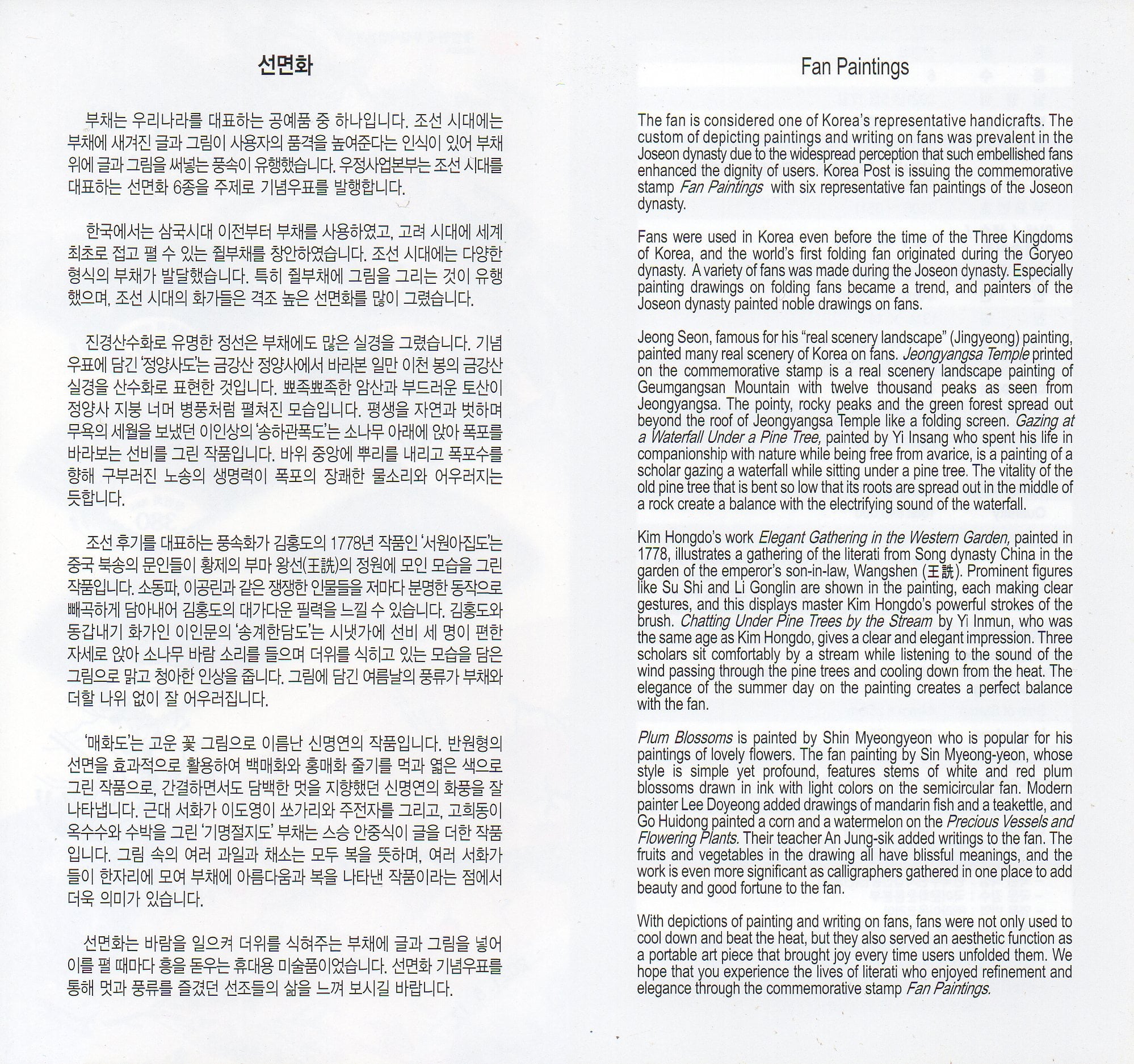 Jeong Seon, famous for his “real scenery landscape” (Jingyeong) painting, painted many real scenery of Korea on fans. Jeongyangsa Temple printed on the commemorative stamp is a real scenery landscape painting of Geumgangsan Mountain with twelve thousand peaks as seen from Jeongyangsa. The pointy, rocky peaks and the green forest spread out beyond the roof of Jeongyangsa Temple like a folding screen. Gazing at a Waterfall Under a Pine Tree, painted by Yi Insang who spent his life in companionship with nature while being free from avarice, is a painting of a scholar gazing a waterfall while sitting under a pine tree. The vitality of the old pine tree that is bent so low that its roots are spread out in the middle of a rock create a balance with the electrifying sound of the waterfall.

Kim Hongdo’s work Elegant Gathering in the Western Garden, painted in 1778, illustrates a gathering of the literati from Song dynasty China in the garden of the emperor’s son-in-law, Wangshen (王詵). Prominent figures like Su Shi and Li Gonglin are shown in the painting, each making clear gestures, and this displays master Kim Hongdo’s powerful strokes of the brush. Chatting Under Pine Trees by the Stream by Yi Inmun, who was the same age as Kim Hongdo, gives a clear and elegant impression. Three scholars sit comfortably by a stream while listening to the sound of the wind passing through the pine trees and cooling down from the heat. The elegance of the summer day on the painting creates a perfect balance with the fan.

Plum Blossoms is painted by Shin Myeongyeon who is popular for his paintings of lovely flowers. The fan painting by Sin Myeong-yeon, whose style is simple yet profound, features stems of white and red plum blossoms drawn in ink with light colors on the semicircular fan. Modern painter Lee Doyeong added drawings of mandarin fish and a teakettle, and Go Huidong painted a corn and a watermelon on the Precious Vessels and Flowering Plants. Their teacher An Jung-sik added writings to the fan. The fruits and vegetables in the drawing all have blissful meanings, and the work is even more significant as calligraphers gathered in one place to add beauty and good fortune to the fan.

With depictions of painting and writing on fans, fans were not only used to cool down and beat the heat, but they also served an aesthetic function as a portable art piece that brought joy every time users unfolded them. We hope that you experience the lives of literati who enjoyed refinement and elegance through the commemorative stamp Fan Paintings.