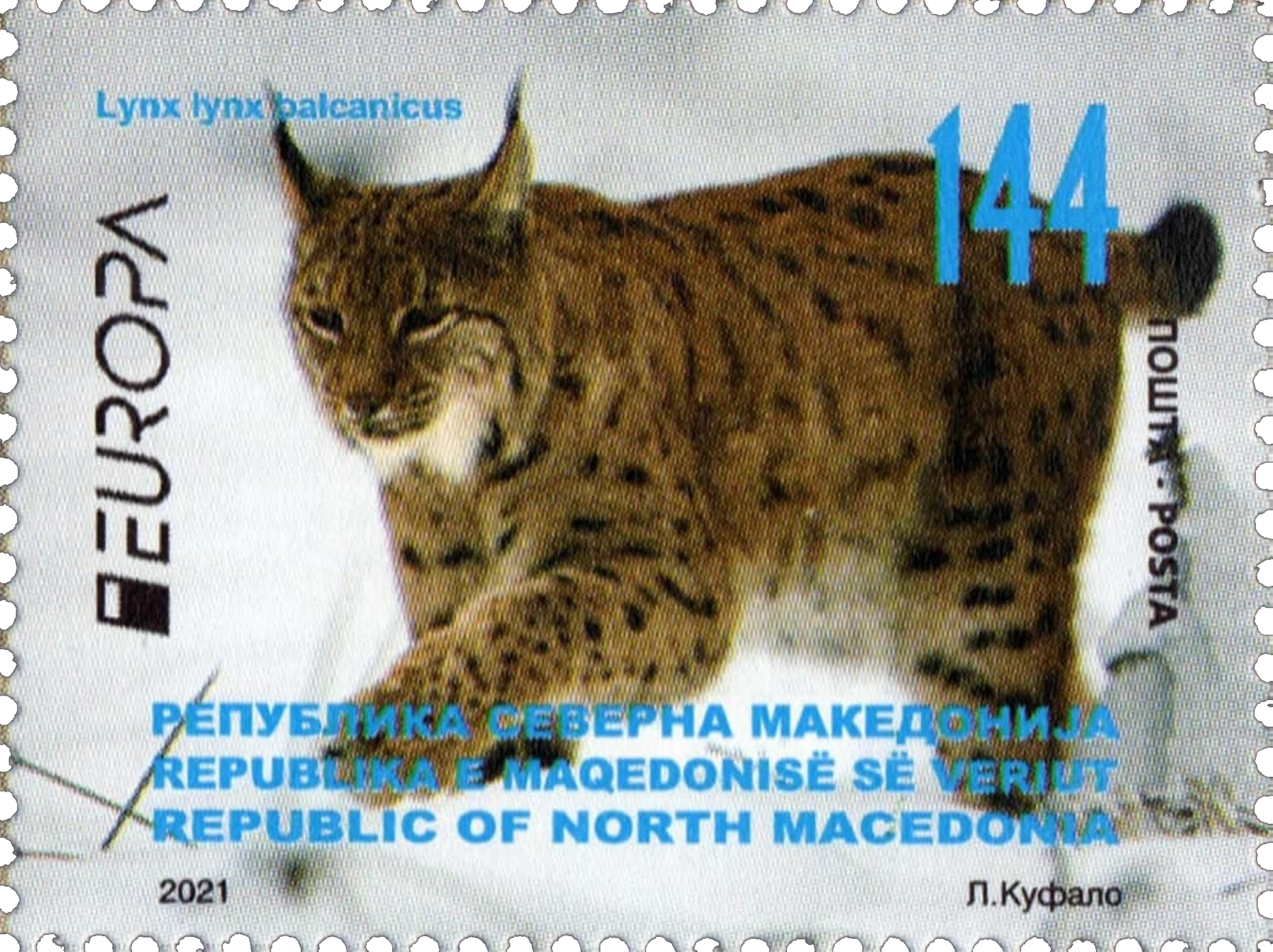 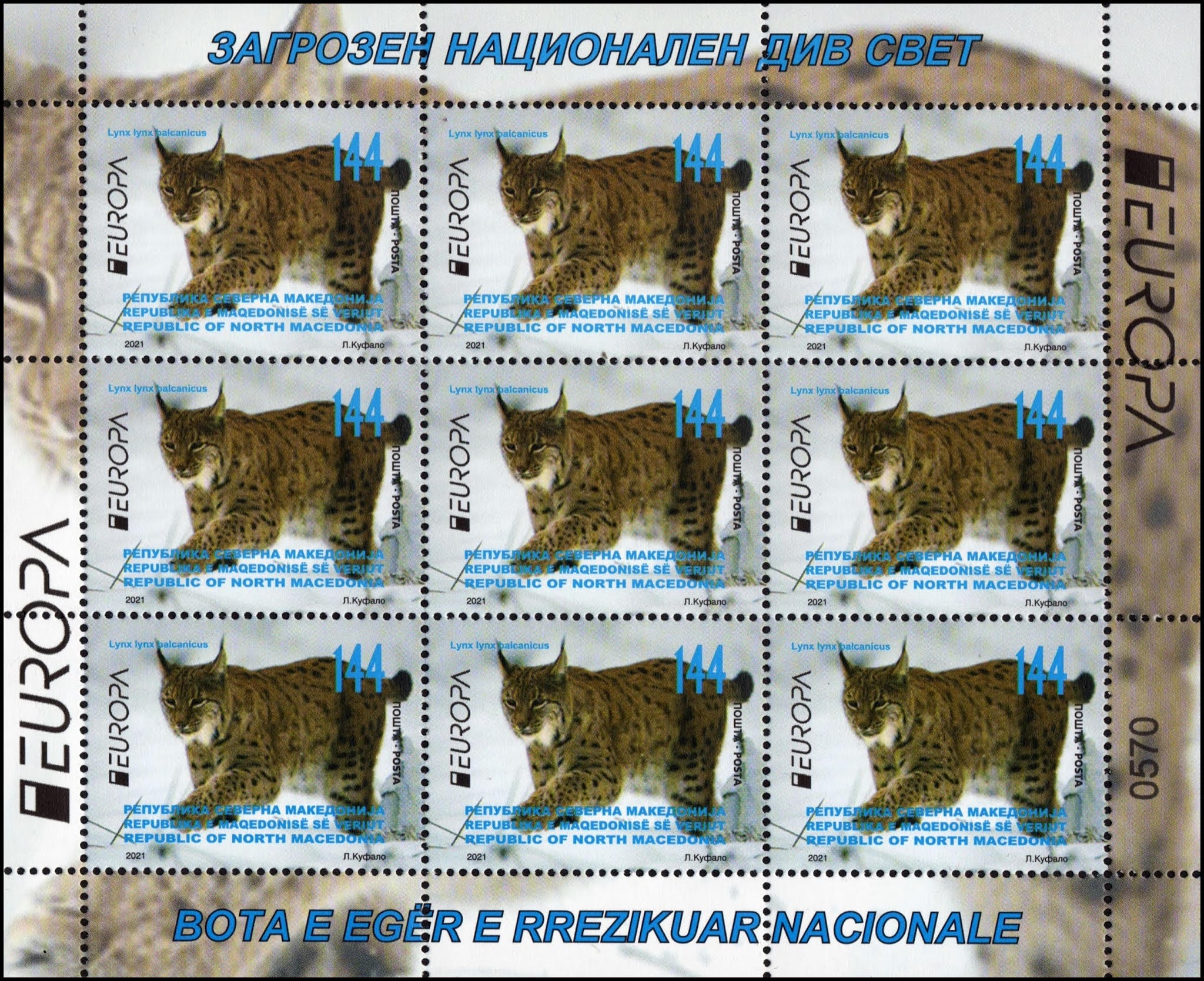 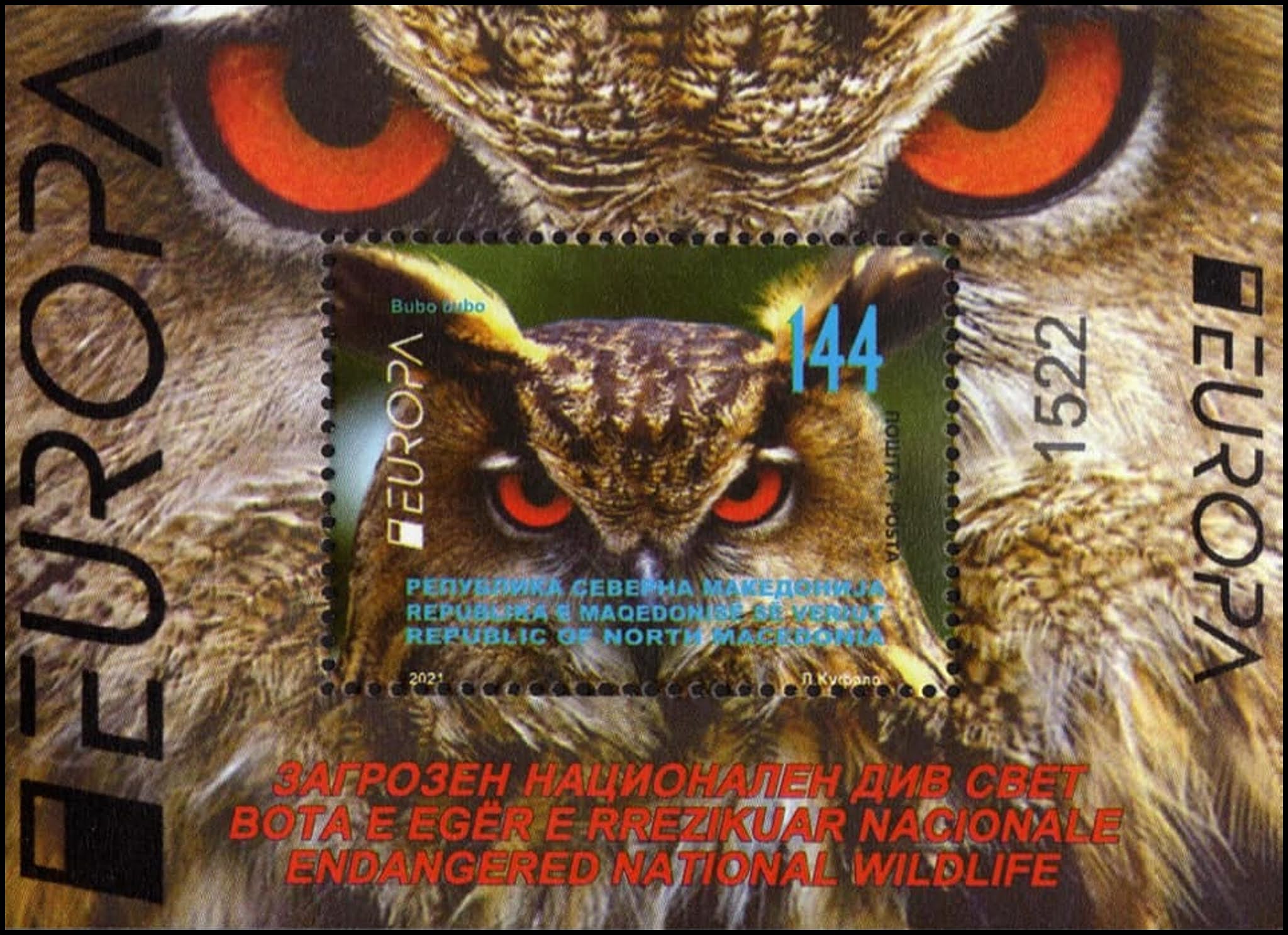 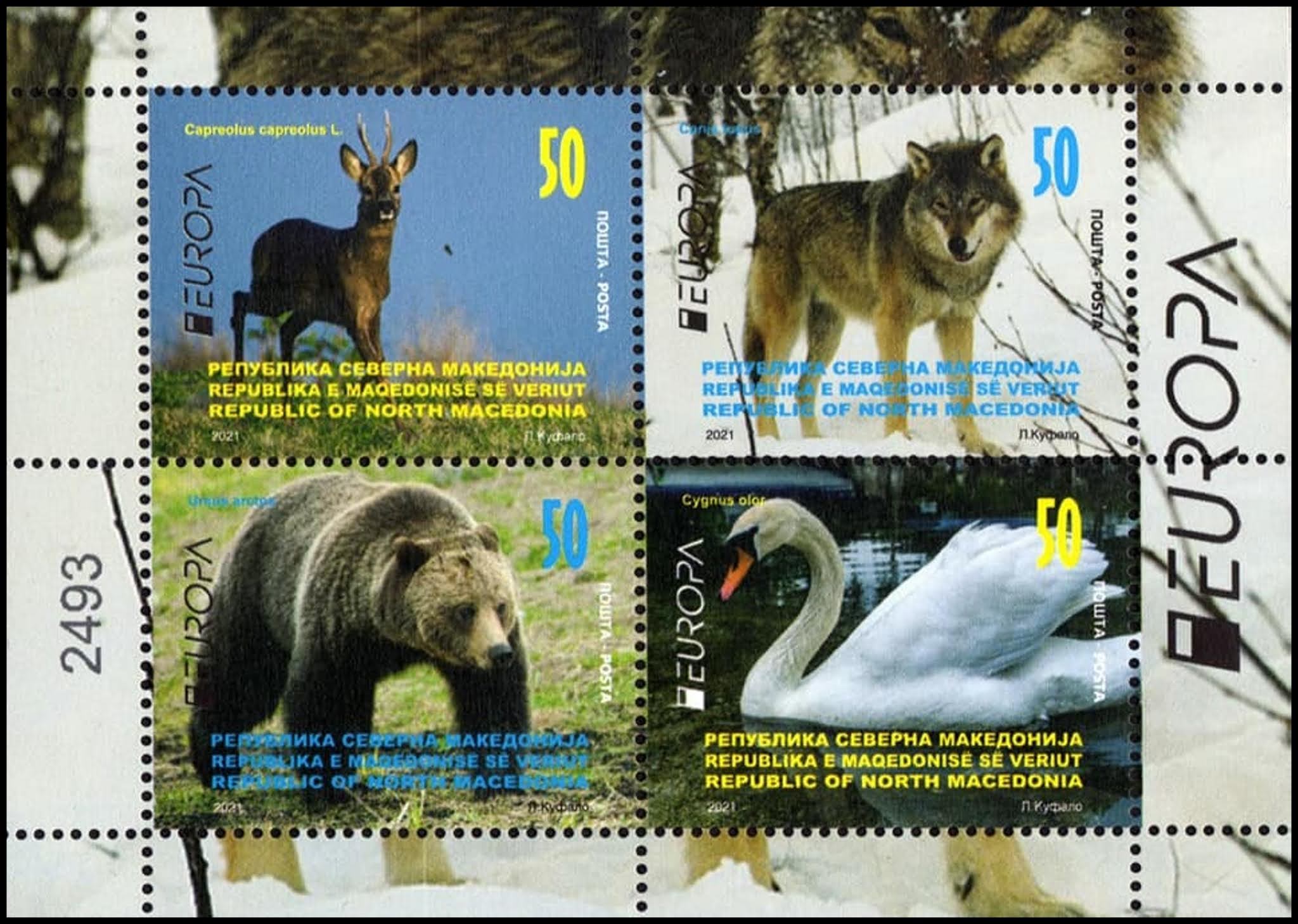 The Balkan lynx (Lynx lynx balcanicus) is a subspecies of the Eurasian lynx in the genus Lynx. It is found in eastern Albania and western North Macedonia, with smaller populations in Kosovo and Montenegro. It is considered a national symbol in the Republic of North Macedonia and appears on the Macedonian five denar coin.

It is believed that in North Macedonia there are from 35 to 40 remaining Balkan lynx, mostly found in Mavrovo National Park. This cat is considered to be the largest cat in the Balkans. It has been sighted in 2011 and 2012 in the northern mountainous region of Albania and within the boundaries of the Shebenik-Jabllanice National Park. The lynx is classified as Critically Endangered in Albania and has been protected de jure since 1969 but, despite this, illegal poaching and habitat destruction threatens the remaining Balkan lynx populations in both Albania and North Macedonia. There are an estimated 15-20 individuals still alive in Albania. The Balkan lynx has been on the brink of extinction for nearly a century, with total numbers estimated to be fewer than 50.

The Balkan lynxes’ decrease in number have been thought to be due to illegal poaching. The Balkan lynx starts mating around January to February, and gives birth in April. While the Balkan lynx is listed as a subspecies in much of the news coverage and taxonomic references, there has been some dispute over those claims.

The Balkan lynx is found in south-west Balkans, Albania, North Macedonia, and potentially Kosovo, Montenegro, and Greece. This is home to a critically endangered population of the Balkan lynx, with an estimated population of 30 adult individuals over 5000 km². They have been recovering since the 1935-1940 where only 15-20 lynxes were estimated to be alive. They seemed to recover after WWII but the population has dwindled since 1974, when it was estimated at 280 lynxes, down to 90 lynxes in 2000. They live in deciduous forests, evergreen forests, mixed forests, and bush habitats. They do not migrate but occasionally hunt in shrub lands, cultivated areas, and high-mountain pastures during the summer. They primarily hunt roe deer, chamois, and brown hare. The Balkan lynx is categorized as critically endangered because of their low population. They are split into two sub-populations in Mavrovo National Park and in North Macedonia.

The most serious threats to the Balkan lynx are the low population size, habitat degradation, and poaching. Poaching affects the Balkan lynxes both directly and indirectly. Hunters that hunt the small wildlife and game indirectly harm the Balkan lynxes by restricting their source of food, such as roe deer, chamois, and hares. It is illegal to hunt Balkan lynxes but there has been evidence that there is a market for Balkan lynx fur. Also, some stuffed lynxes are seen as decorations in some restaurants in the countryside of Albania and North Macedonia.

Tourists resorts and recreational activities have little to no effects on the population, whereas sport hunting and ski resorts can disturb the population within the national parks, where the majority of the Balkan lynxes habitat. The degradation of habitat is primarily in Albania, where logging has taken its toll on the environment and negatively affects the Balkan lynx. Albania’s forests have been recovering from over exploitation since the 1800s. Although it is illegal to continue logging in the protected Balkan lynx habitat, it is still done and can potentially destroy the only habitat the Balkan lynx has.

Because they have such low population density, it is difficult for mature adults to mate with each other. The population is separated into two different sub-populations in Albania and North Macedonia, further hindering the mating process, although both populations were confirmed to be stabilized by the Balkan Lynx Recovery Programme. There is a slight worry with the expansion of the native Carpathian and reintroduced Dinaric lynx population that may threaten the genetic integrity of the Balkan lynx population. Public attitudes towards the Balkan lynx were also gauged through social science studies, indicating that they are mostly positive, although not very well known and have many misconceptions about its size, behavior, and ecology.

The Balkan lynx is considered a critically endangered species by the International Union for Conservation of Nature (IUCN) and is the highest risk category for endangered species. The Balkan lynx is also protected under the Convention for International Trade of Endangered Species (CITIES) by Appendix II, the Bern Convention by Appendix III, the EU Habitats and Species Directive by Annexes II and IV, as well as all range countries.

A three-year program called the Balkan Lynx Recovery Programme (BLRP) was started in 2006 to combine the protection for lynxes and their habitats in Albania and North Macedonia. Sponsored by the Swiss-based MAVA Foundation, the goals of the program was to survey and monitor the lynx population, gathering data of their distribution, population tendencies, habitation, develop Conservation Strategy and National Action Plans across the range of the Balkan lynx, lobby for the Balkan lynx in protected areas in the European Green Belt, and build professional partnerships with relevant stakeholders in nature protection. The Balkan lynx was chosen as their figurehead and umbrella species. At the same time, a Human Dimension project was started in both Albania and North Macedonia, funded by the Research Council of Norway. The purpose of the project was to explore the human-large carnivore relationship, possible conflicts, the attitudes of the local people, and the challenges of cross border cooperation in large carnivore conservation.

The second phase of the Balkan Lynx Recovery Programme was put into place in 2010 continuing the work done since 2006. This time, they delved deeper and began a scientific study on the Balkan lynx, supported by the Swiss National Science Foundation. During this time, three male lynxes were caught and tagged with GPS collars and an intensive monitoring system was put into place at the core area of habitation, as well as a network monitoring wildlife. This project lasted from 2010 to 2012. The third phase of the BLRP began in 2013 to 2016 and focuses on raising awareness of the critical state of the Balkan lynx in primary schools locally, nationally, and internationally. They also continue the work on monitoring the core area of habitation of the Balkan lynx as well as expanding the project to combine research in both countries of North Macedonia and Albania.