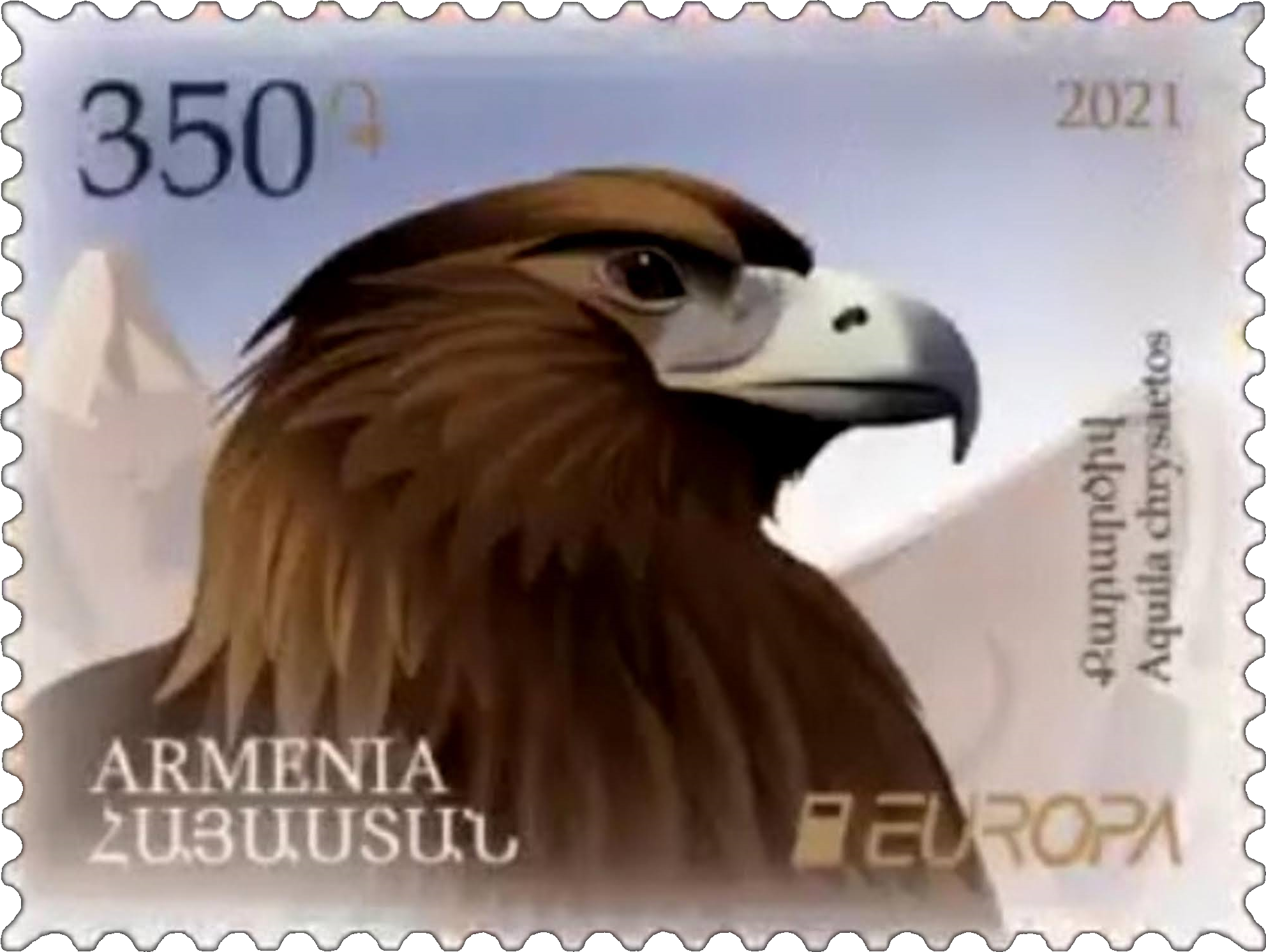 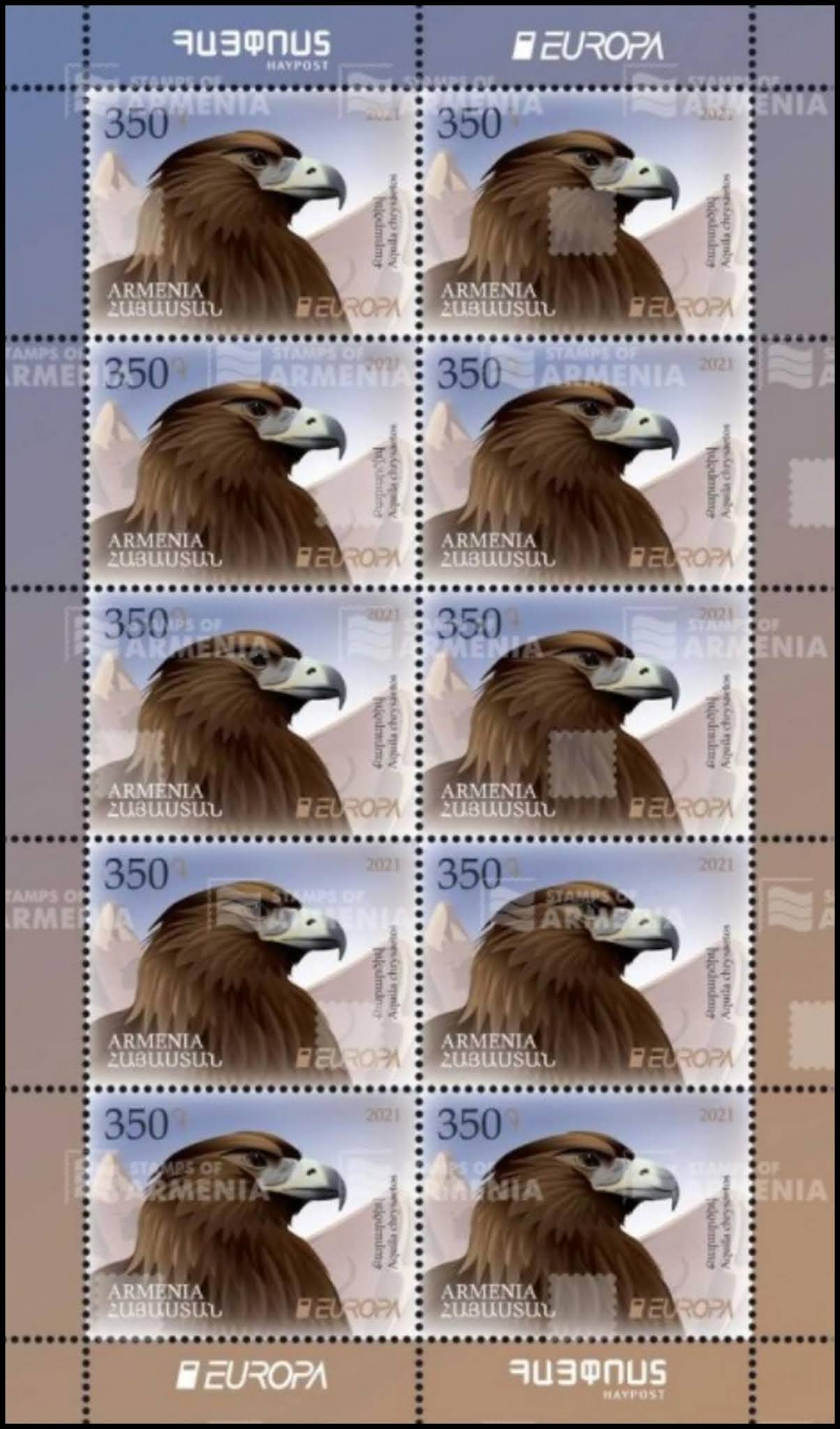 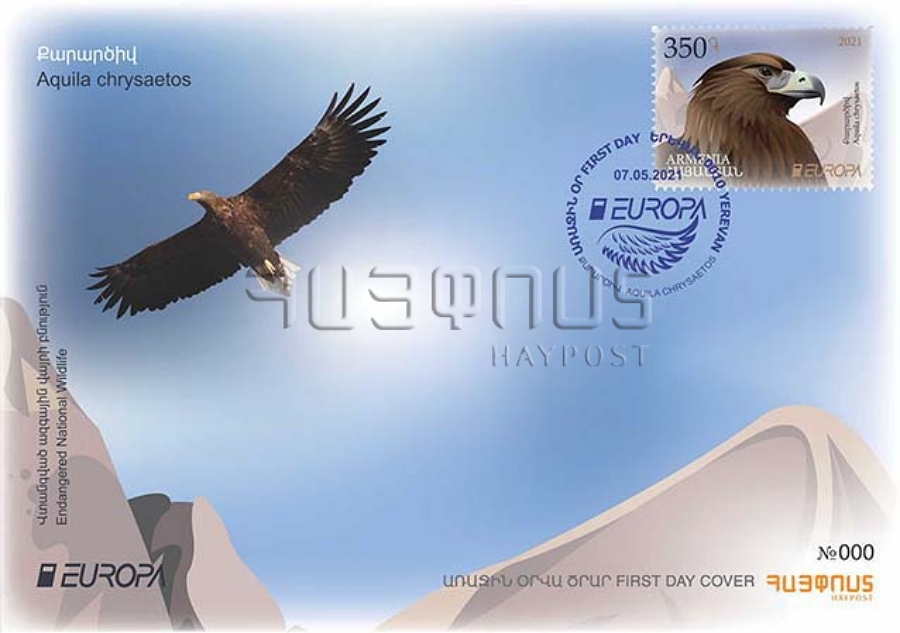 On May 7th, 2021, one postage stamp dedicated to the theme “International. Europa 2021. Endangered National Wildlife” has been put into circulation.

The postage stamp depicts the predatory bird “Aquila chrysaetos” (Golden Eagle) against the background of the Armenian mountains. The bird is included in the Red Book of the Republic of Armenia.

The golden eagle (Aquila chrysaetos) is one of the best-known birds of prey in the Northern Hemisphere. It is the most widely distributed species of eagle. Like all eagles, it belongs to the family Accipitridae. These birds are dark brown, with lighter golden-brown plumage on their napes. Immature eagles of this species typically have white on the tail and often have white markings on the wings. Golden eagles use their agility and speed combined with powerful feet and massive, sharp talons to snatch up a variety of prey, mainly hares, rabbits, and marmots and other ground squirrels. Golden eagles maintain home ranges or territories that may be as large as 200 km² (77 sq mi). They build large nests in cliffs and other high places to which they may return for several breeding years. Most breeding activities take place in the spring; they are monogamous and may remain together for several years or possibly for life. Females lay up to four eggs, and then incubate them for six weeks. Typically, one or two young survive to fledge in about three months. These juvenile golden eagles usually attain full independence in the fall, after which they wander widely until establishing a territory for themselves in four to five years.

Once widespread across the Holarctic, it has disappeared from many areas which are now more heavily populated by humans. Despite being extirpated from or uncommon in some of its former range, the species is still widespread, being present in sizeable stretches of Eurasia, North America, and parts of North Africa. It is the largest and least populous of the five species of true accipitrid to occur as a breeding species in both the Palearctic and the Nearctic.

For centuries, this species has been one of the most highly regarded birds used in falconry. Due to its hunting prowess, the golden eagle is regarded with great mystic reverence in some ancient, tribal cultures. It is one of the most extensively studied species of raptor in the world in some parts of its range, such as the Western United States and the Western Palearctic.