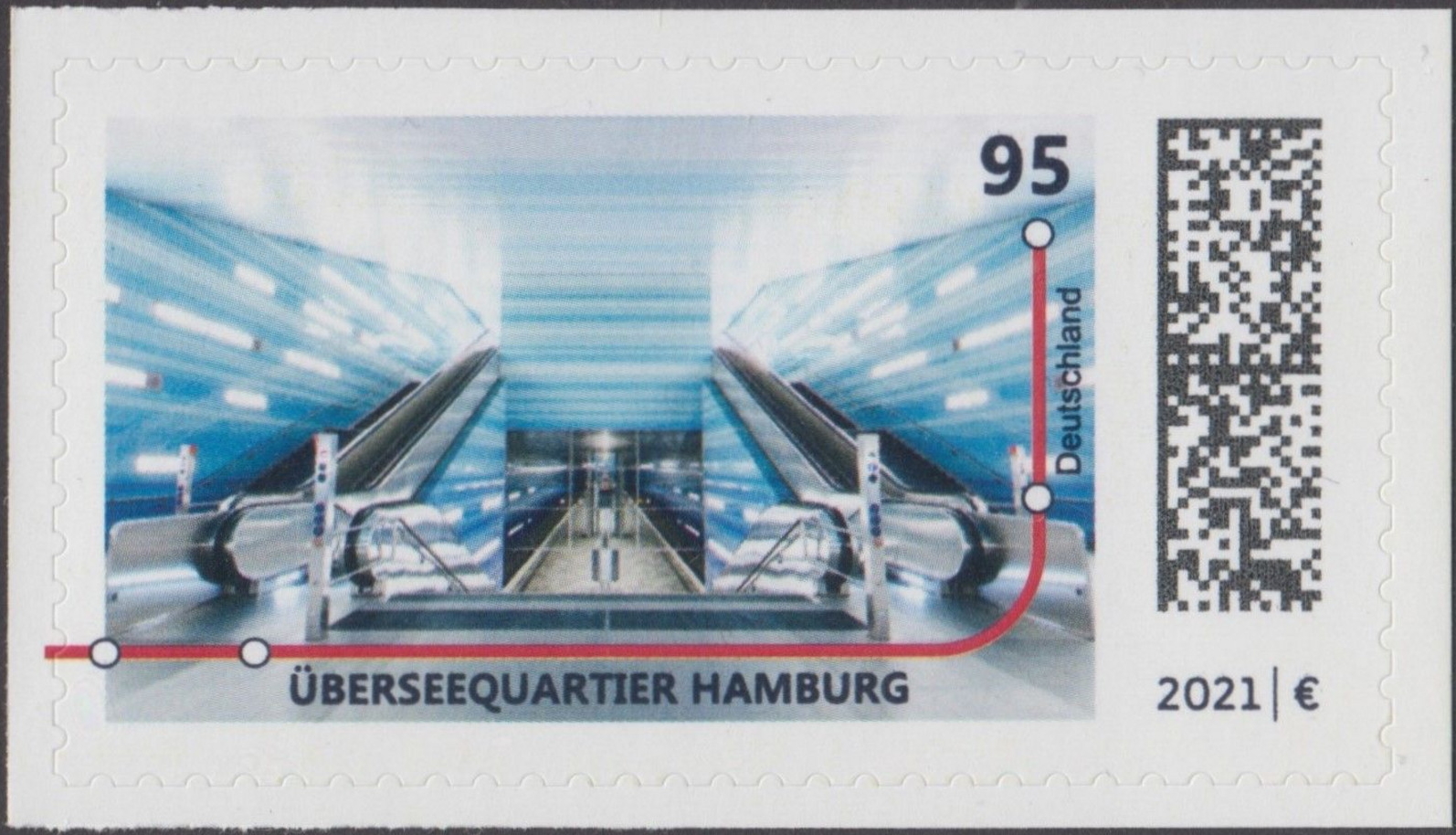 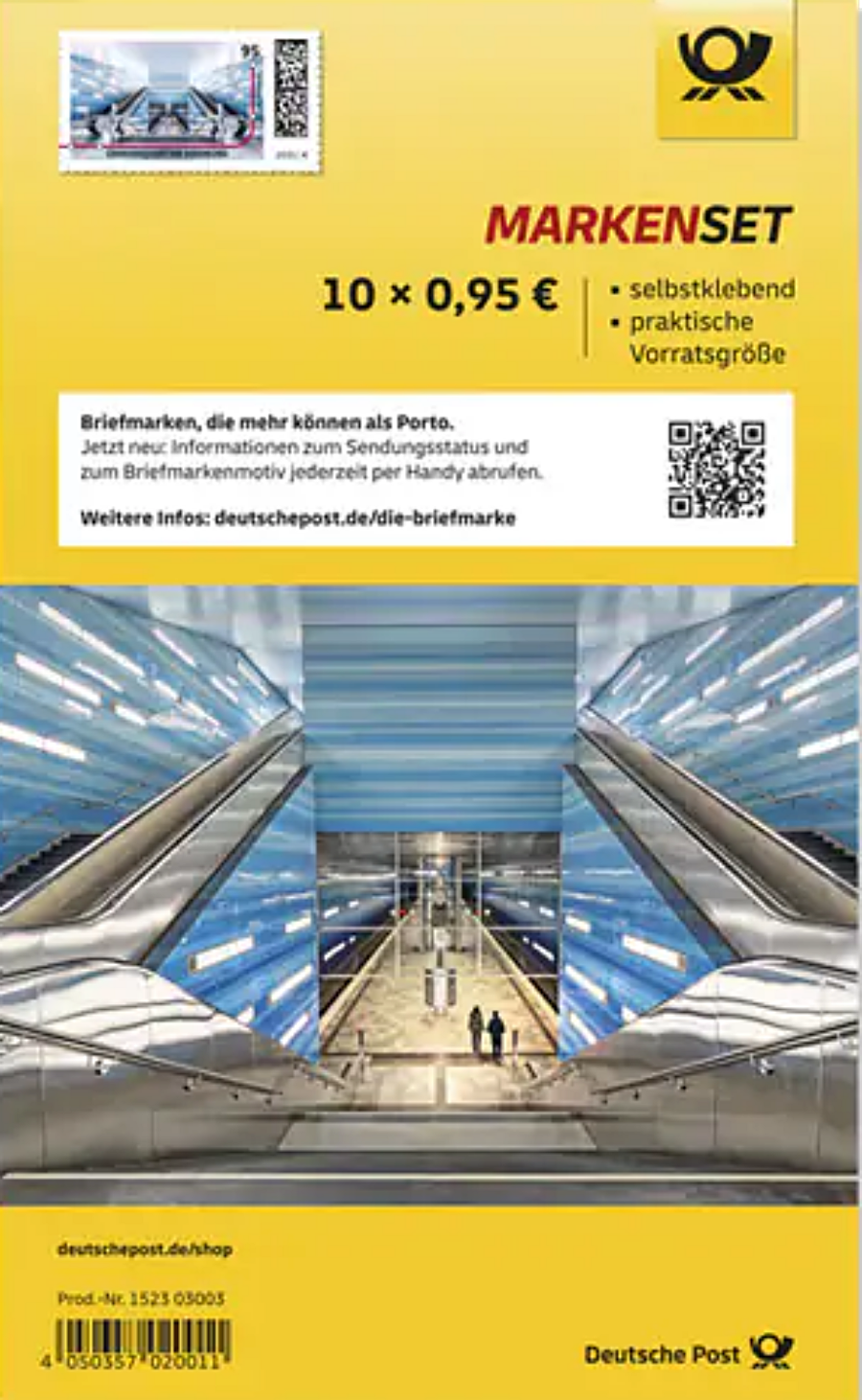 Self-adhesive postage stamps of 0.95 EUR each in a set of 10, suitable for the franking of compact letters up to 50 g within Germany as well as postcards Europe and World.

The Hamburg underground station Überseequartier is designed like an abstract underwater world. The access and exit areas as well as the distribution planes are clad with small-format, ceramic-coated glass tiles that show ever darker blues from top to bottom. This creates the feeling of immersion in the blue of the oceans for visitors to the station down to the platform hall, which is almost 20 metres below the site. Here, the wall cladding and the platform floor give the impression of a sandbank resting on the seabed.

The new generation of stamps

Stamps with matrix code can now do more than “just” postage: they offer you in conjunction with the new Post & DHL App a basic tracking* for your letters and postcards. In addition, the app provides information about the stamp and the motif – an attractive added value not only for collectors.

* The basic shipment tracking documents the processing of the shipment in the start and destination letter center. For letters abroad, tracking is documented until forwarded abroad. If you need proof of delivery, we recommend that you registered mail and for the priority treatment, the additional benefit Prio.

The Hamburg U-Bahn is a rapid transit system serving the cities of Hamburg, Norderstedt and Ahrensburg in Germany. Although technically an underground, most of the system’s track length is above ground. The network is interconnected with the city’s S-Bahn system, which also has underground sections. It is operated by Hamburger Hochbahn within the Hamburger Verkehrsverbund (HVV). It was opened in February 1912, and comprises four lines serving 93 stations, with a route length of 106.4 kilometres (66.1 mi) in 2019.

In 1906 the Senate of Hamburg awarded a contract for the Elevated and Underground Railway to Siemens & Halske and AEG of Berlin. The first stretch was completed on 7 October 1906. This was followed in 1911 with the founding of the Hamburger Hochbahn Aktiengesellschaft (HHA). Thus Hamburg became the third German city (after Berlin, 1902 and Schöneberg, 1910) to have a U-Bahn (then known as the Elevated and Underground Railway (Hoch- und Untergrundbahn) as it is largely either elevated or in tunnels – not much at street level).

The construction of such a railway had long been discussed, meanwhile an elevated train was also considered. In 1906 a circular route was begun, connecting Hamburg Hauptbahnhof – Berliner Tor – Barmbek (earlier spelling: Barmbeck) – Kellinghusenstraße – Schlump – Landungsbrücken (earlier designation: Hafentor) – Rathaus – Hauptbahnhof with branches to the quarters of Eimsbüttel, Ohlsdorf and Rothenburgsort. On 15 February 1912 the first stretch of the future Ringbahn (Circle railway) between Rathaus station und Barmbek was inaugurated. The stretch included both underground and elevated sections.

In 1943, during the Second World War the subway was badly damaged during ‘Operation Gomorrha,’ the RAF bombing of Hamburg that summer. The stretch from Hauptbahnhof to Rothenburgsort was not repaired because the district it passed through had been completely destroyed. It was five more years before the remaining network was once more completely intact.

Further additions to the network were made, starting in 1960. The KellJung line was extended via Meßberg to the central station (Hauptbahnhof). Later in 1962 the extension reached Wandsbek Markt and in 1963 Wandsbek-Gartenstadt. The total network length was 67.9 kilometres (42 mi).

The construction of a Durchmesserstrecke (diameter route) began in 1963. The plan was to connect Billstedt with Stellingen. The Eimsbüttel branch formed the western part of the line. The branch was extended up to Hagenbecks Tierpark in 1966. The existing terminus at Hellkamp was withdrawn from service in 1964 and a new station was built at Lutterothstraße further northwest.

The connection between Berliner Tor and Horner Rennbahn was opened in 1967. In the same year this eastern branch was extended to Legienstraße. Further extensions took place in 1969 to Billstedt and in 1970 towards Merkenstraße. The extension Ochsenzoll – Garstedt came into service in May 1969. Thus, the network total length reached 88.5 km (55 mi).

A new core stretch of the line U2, between Schlump and Berliner Tor, became a direct connection through the city centre. Next to be brought into service were sections from Hauptbahnhof Nord to Berliner Tor in 1968, and from Schlump (low) to Gänsemarkt in 1970, then the last section, with two new platforms on the lowest level at the station Jungfernstieg under the Binnenalster, in 1973. This station, as well as Hauptbahnhof Nord, was developed as part of the U4 line that was planned at that time.

In 1985 the section to Hagenbecks Tierpark was extended to Niendorf Markt and again in 1991 as far as Niendorf Nord. In 1990 the extension Merkenstraße – Mümmelmannsberg was opened. The line extension opened in 1996 between Garstedt and Norderstedt Mitte, which replaced the southern part of the Alsternordbahn.

In 2009, the U3, beginning in Barmbek, traversed the complete ring line, thereby taking over the stretch between Berliner Tor and Barmbek, which was formerly served by the U2. In order to realise a problem-free service, a redesign of the current track layout to the west of Berliner Tor was necessary. An originally planned grade separated crossing of the two lines was realised, which was left undone before due to cost. Trains coming from the city centre leave the ring at Barmbek and continue via the viaduct stretch to Wandsbek Gartenstadt. One branch leads via the Walddörferbahn to Wandsbek-Gartenstadt, a stretch formerly served by the U2.

In 2012, the U4 started operations between Billstedt and HafenCity University, sharing most of its route with the U2 and thereby increasing service on the highly used line between Berliner Tor and Billstedt. The U4 was extended further east to Elbbrücken in December 2018, providing a future S-Bahn connection.

The Hamburg U-Bahn uses standard gauge electric multiple units that run on third rail with 750 volts DC. The current fleet mostly consists of trains that had been developed from the 1950s to 1980s. In 2012, newly developed trains were introduced. A typical Hamburg U-Bahn train is made up of six (U3 line), eight or nine cars (all other lines). Trains with four cars can also be found during weekends or late nights. 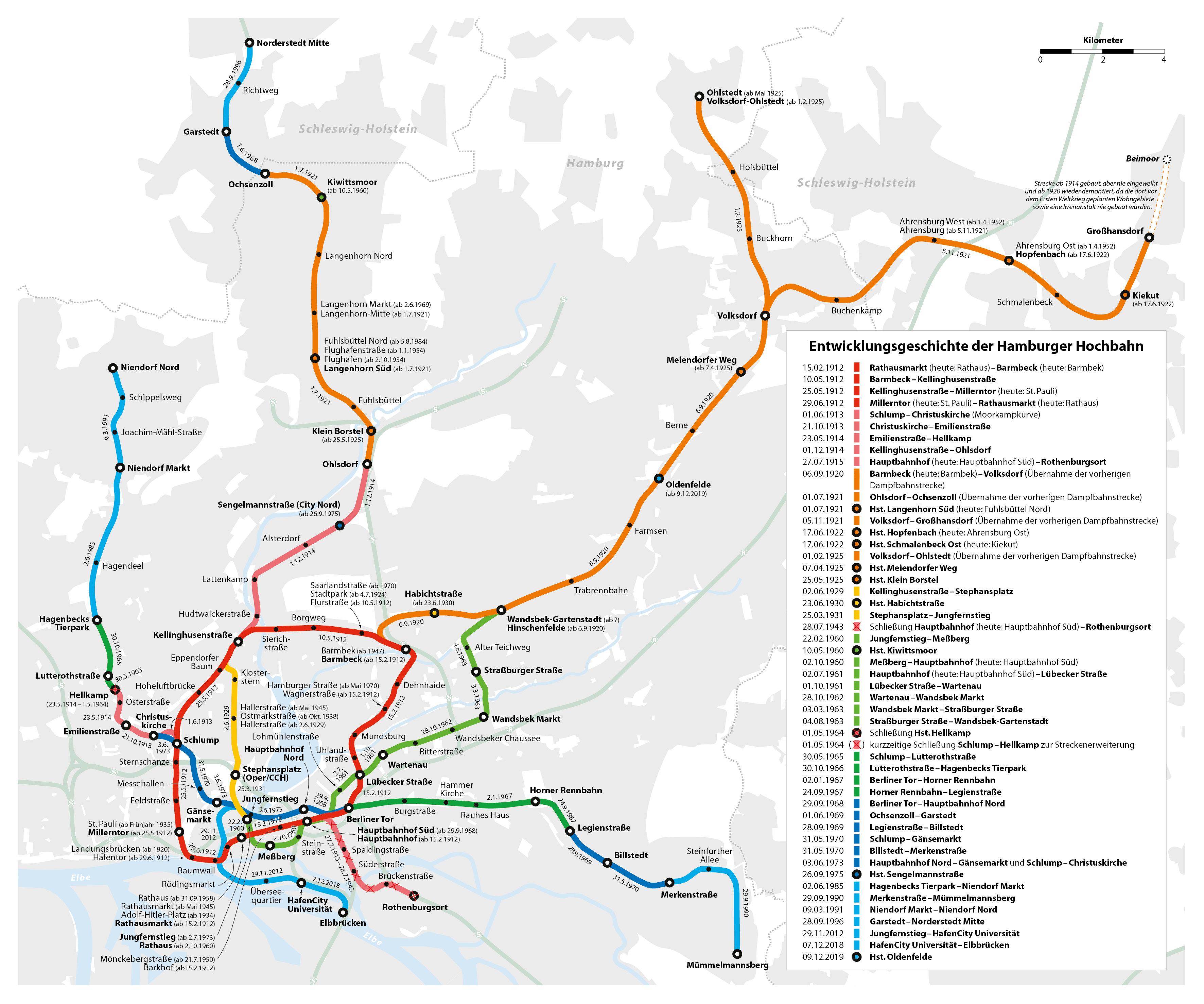 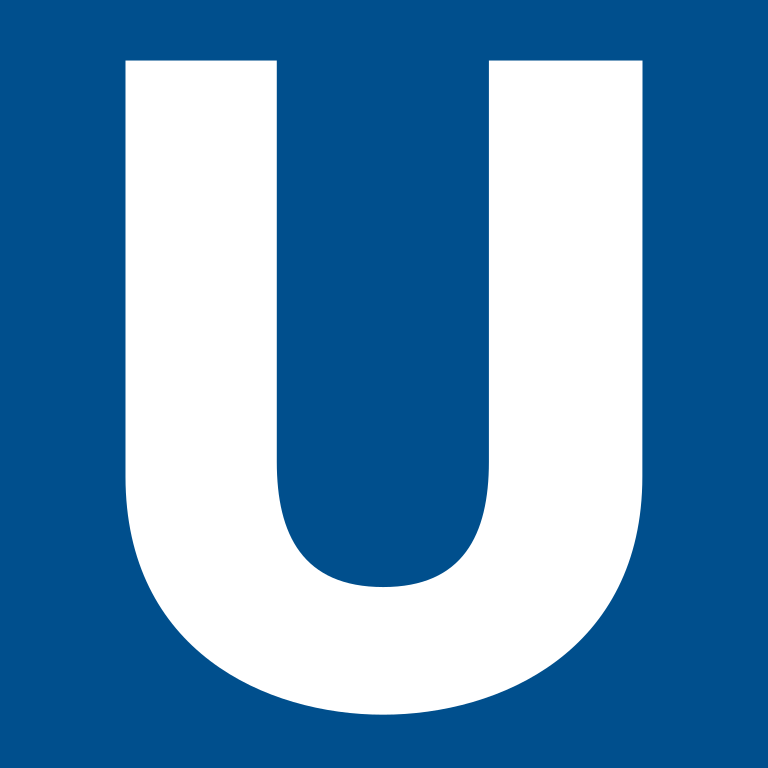