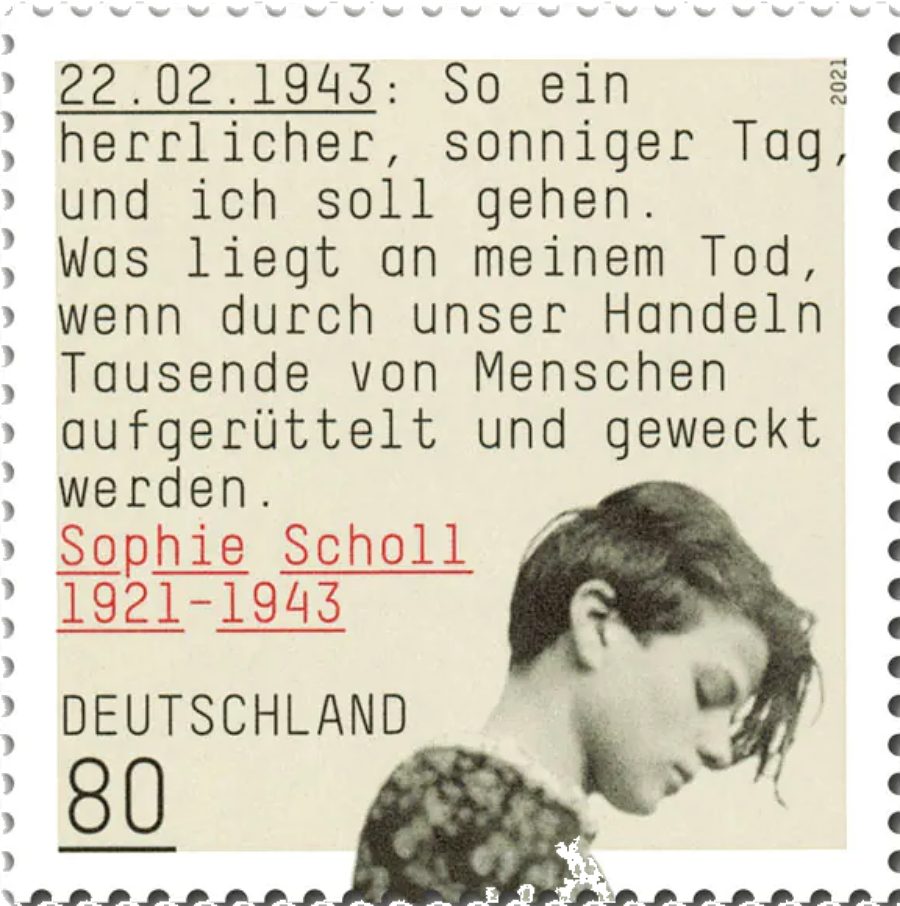 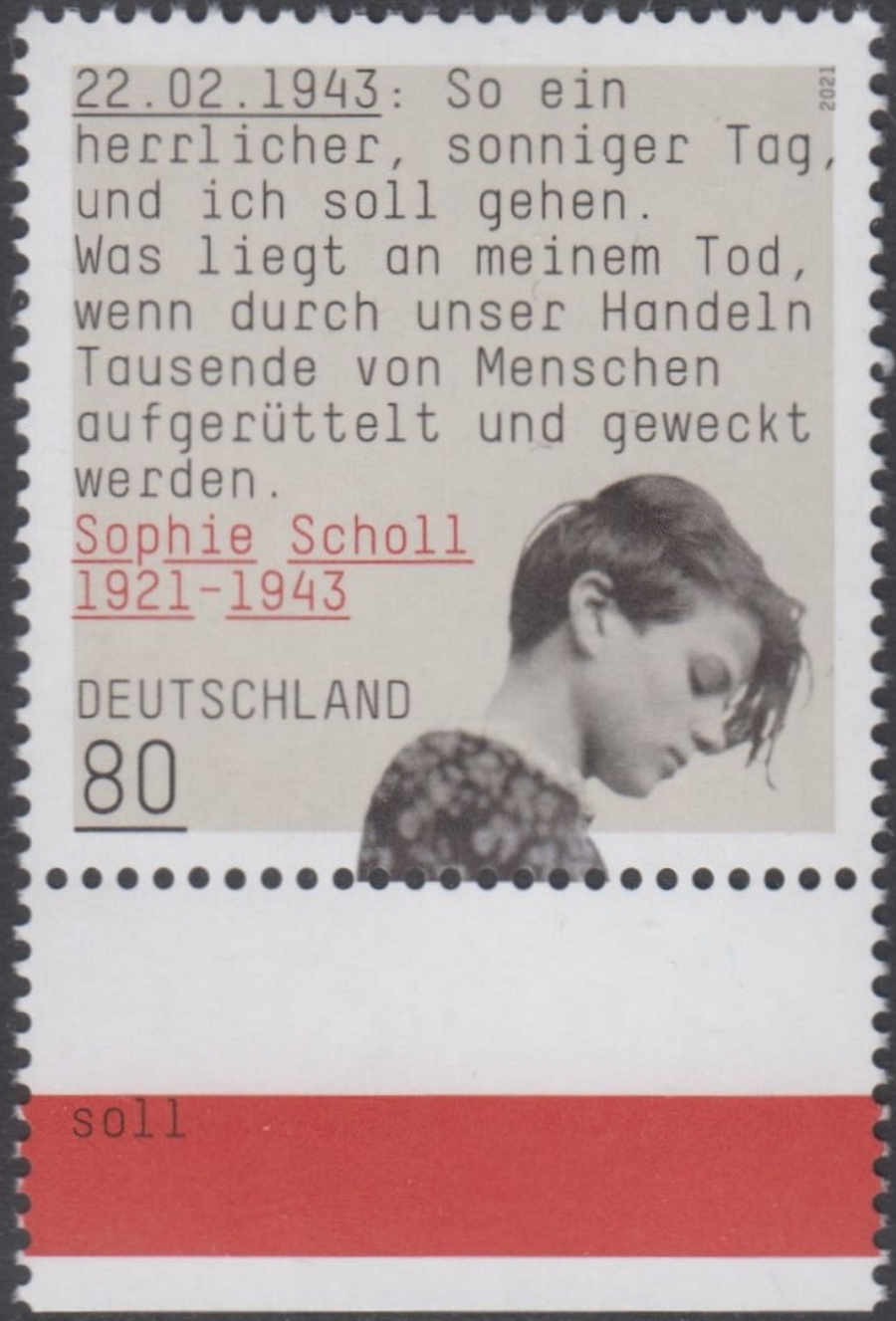 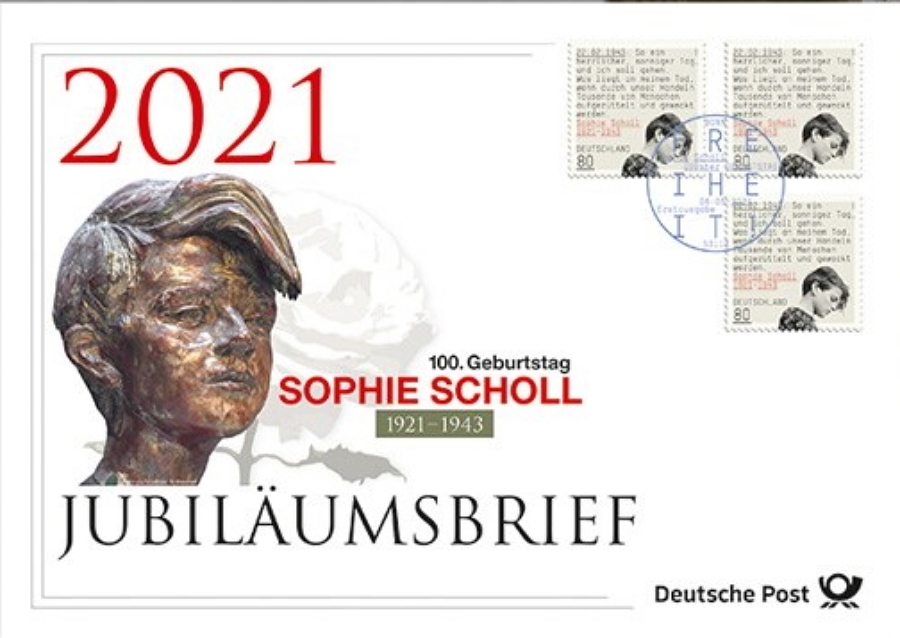 She was convicted of high treason after having been found distributing anti-war leaflets at the University of Munich (LMU) with her brother, Hans. As a result, she was executed by guillotine. Since the 1970s, Scholl has been extensively commemorated for her anti-Nazi resistance work.

Scholl was the daughter of Magdalena (Müller) and liberal politician and ardent Nazi critic Robert Scholl, who was the mayor of her hometown of Forchtenberg am Kocher in the Free People’s State of Württemberg at the time of her birth. She was the fourth of six children.

Scholl was brought up in the Lutheran church. She entered junior or grade school at the age of seven, learned easily, and had a carefree childhood. In 1930, the family moved to Ludwigsburg and then two years later to Ulm where her father had a business consulting office.

In 1932, Scholl started attending a secondary school for girls. At the age of twelve, she chose to join the Bund Deutscher Mädel (League of German Girls), as did most of her classmates. Her initial enthusiasm gradually gave way to criticism. She was aware of the dissenting political views of her father, friends, and some teachers. Even her own brother Hans, who once eagerly participated in the Hitler Youth program, became entirely disillusioned with the Nazi Party. Political attitude had become an essential criterion in her choice of friends. The arrest of her brothers and friends in 1937 for participating in the German Youth Movement left a strong impression on her.

She had a talent for drawing and painting and for the first time, came into contact with a few so-called “degenerate” artists. An avid reader, she developed a growing interest in philosophy and theology.

In spring 1940, she graduated from secondary school, where the subject of her essay was “The Hand that Moved the Cradle, Moved the World.” Scholl nearly did not graduate, having lost all desire to participate in the classes which had largely become Nazi indoctrination. Being fond of children, she became a kindergarten teacher at the Fröbel Institute in Ulm. She had also chosen this job hoping that it would be recognized as an alternative service in the Reichsarbeitsdienst (National Labor Service), a prerequisite for admission to university. This was not the case and in spring 1941 she began a six-month stint in the auxiliary war service as a nursery teacher in Blumberg. The military-like regimen of the Labor Service caused her to rethink her understanding of the political situation and to begin practicing passive resistance.

After her six months in the National Labor Service, in May 1942, she enrolled at the University of Munich as a student of biology and philosophy. Her brother Hans, who was studying medicine there, introduced her to his friends. Although this group of friends eventually was known for their political views, they initially were drawn together by a shared love of art, music, literature, philosophy, and theology. Hiking in the mountains, skiing, and swimming were also of importance to them. They often attended concerts, plays, and lectures together.

In Munich, Scholl met a number of artists, writers, and philosophers, particularly Carl Muth and Theodor Haecker, who were important contacts for her. The question they pondered the most was how the individual must act under a dictatorship. During the summer vacation in 1942, Scholl had to do war service in a metallurgical plant in Ulm. At the same time, her father was serving time in prison for having made a critical remark to an employee about Hitler.

Between 1940 and 1941, Scholl’s brother, Hans Scholl, a former member of the Hitler Youth, began questioning the principles and policies of the Nazi regime. As a student at the University of Munich, Hans Scholl met two Roman Catholic men of letters who redirected his life, inspiring him to turn from studying medicine and pursue religion, philosophy, and the arts. Gathering around him like-minded friends, Alexander Schmorell, Willi Graf, and Jurgen Wittenstein, they eventually adopted a strategy of passive resistance towards the Nazis by writing and publishing leaflets that called for the toppling of National Socialism, calling themselves the White Rose. In the summer of 1942, four leaflets were written and distributed throughout the school and central Germany.

Based upon letters between Scholl and her boyfriend, Fritz Hartnagel (reported and analyzed by Gunter Biemer and Jakob Knab in the journal Newman Studien), she had given two volumes of Saint John Henry Newman’s sermons to Hartnagel when he was deployed to the eastern front in May 1942. This discovery by Jakob Knab shows the importance of religion in Scholl’s life and was highlighted in an article in the Catholic Herald in the UK. Scholl learned of the White Rose pamphlet when she found one at her university. Realizing her brother helped write the pamphlet, Scholl herself began to work on the White Rose.

The group of authors had been horrified by Hartnagel’s reports of German war crimes on the Eastern Front where Hartnagel witnessed Soviet POWs being shot in a mass grave and learned of the mass killings of Jews. Her correspondence with Hartnagel deeply discussed the “theology of conscience” developed in Newman’s writings. This is seen as her primary defense in her transcribed interrogations leading to her “trial” and execution. Those transcripts became the basis for a 2005 film treatment, Sophie Scholl – The Final Days.

With six core members, three more White Rose pamphlets were created and circulated over the summer of 1942.

She and the rest of the White Rose were arrested for distributing the sixth leaflet at the University of Munich on 18 February 1943. The Scholls brought a suitcase full of leaflets to the university main building. They hurriedly dropped stacks of copies in the empty corridors for students to find when they left the lecture rooms. Leaving before the lectures had ended, the Scholls noticed that there were some left-over copies in the suitcase and decided to distribute them. Sophie flung the last remaining leaflets from the top floor down into the atrium. This spontaneous action was observed by the university maintenance man, Jakob Schmid. Hans and Sophie Scholl were taken into Gestapo custody. A draft of a seventh pamphlet, written by Christoph Probst, was found in the possession of Hans Scholl at the time of his arrest by the Gestapo. While Sophie Scholl disposed of incriminating evidence before being taken into custody, Hans tried to destroy the draft of the last leaflet by tearing it apart and trying to swallow it. The Gestapo recovered enough of it and were able to match the handwriting with other writings from Probst, which they found when they searched Hans’s apartment. The main Gestapo interrogator was Robert Mohr, who initially thought Sophie was innocent. However, after Hans had confessed, Sophie assumed full responsibility in an attempt to protect other members of the White Rose.

In the People’s Court before Judge Roland Freisler on 21 February 1943, Scholl was recorded as saying these words:

Somebody, after all, had to make a start. What we wrote and said is also believed by many others. They just don’t dare express themselves as we did.

No testimony was allowed for the defendants; this was their only defense.

On 22 February 1943, Scholl, her brother, Hans, and their friend, Christoph Probst, were found guilty of treason and condemned to death. They were all beheaded by guillotine by executioner Johann Reichhart in Munich’s Stadelheim Prison only a few hours later, at 17:00 hrs. The execution was supervised by Walter Roemer, the enforcement chief of the Munich district court. Prison officials, in later describing the scene, emphasized the courage with which she walked to her execution. Her last words were:

Such a fine, sunny day, and I have to go… What does my death matter, if through us, thousands of people are awakened and stirred to action?

Fritz Hartnagel was evacuated from Stalingrad in January 1943, but did not return to Germany before Sophie was executed. In October 1945, he married Sophie’s sister Elisabeth.

After her death, a copy of the sixth leaflet was smuggled out of Germany through Scandinavia to the UK by German jurist Helmuth James Graf von Moltke, where it was used by the Allied Forces. In mid-1943, they dropped millions of propaganda copies of the tract over Germany, now retitled The Manifesto of the Students of Munich.

Playwright Lillian Garrett-Groag said in Newsday on 22 February 1993, that “It is possibly the most spectacular moment of resistance that I can think of in the twentieth century … The fact that five little kids, in the mouth of the wolf, where it really counted, had the tremendous courage to do what they did, is spectacular to me. I know that the world is better for them having been there, but I do not know why.”

In the same issue of Newsday, Holocaust historian Jud Newborn noted that “You cannot really measure the effect of this kind of resistance in whether or not X number of bridges were blown up or a regime fell … The White Rose really has a more symbolic value, but that’s a very important value.”

Else Gebel shared Sophie Scholl’s cell and recorded her last words before being taken away to be executed. “It is such a splendid sunny day, and I have to go. But how many have to die on the battlefield in these days, how many young, promising lives. What does my death matter if by our acts thousands are warned and alerted. Among the student body there will certainly be a revolt.”

On 22 February 2003, a bust of Scholl was placed by the government of Bavaria in the Walhalla temple in her honour.

The Geschwister-Scholl-Institut (“Scholl Siblings Institute”) for Political Science at the Ludwig Maximilian University of Munich (LMU) is named in honour of Sophie Scholl and her brother Hans. The institute is home to the university’s political science and communication departments, and is housed in the former Radio Free Europe building close to the city’s Englischer Garten.

Many local schools as well as countless streets and squares in Germany have been named after Scholl and her brother.

In 2003, Germans were invited by television broadcaster ZDF to participate in Unsere Besten (Our Best), a nationwide competition to choose the top ten most important Germans of all time. Voters under the age of 40 helped Scholl and her brother Hans to finish in fourth place, above Bach, Goethe, Gutenberg, Bismarck, Willy Brandt, and Albert Einstein. If the votes of young viewers alone had been counted, Sophie and Hans Scholl would have been ranked first. Several years earlier, readers of Brigitte, a German magazine for women, voted Scholl “the greatest woman of the twentieth century”.

On 9 May 2014, Google depicted Scholl for its Google Doodle on the occasion of what would have been her 93rd birthday. In 2021, Deutsche Post marked the centennial of her birth with a commemorative postage stamp.