The Year of Saint Joseph 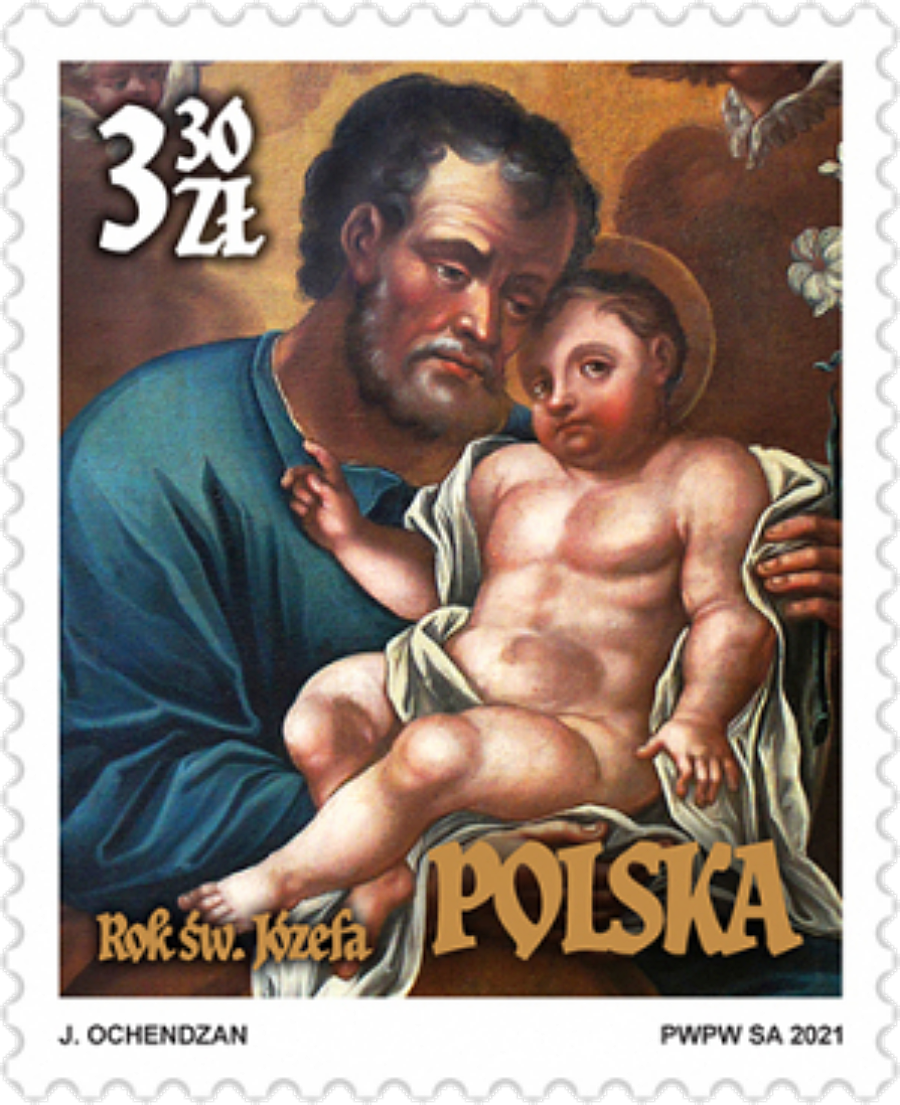 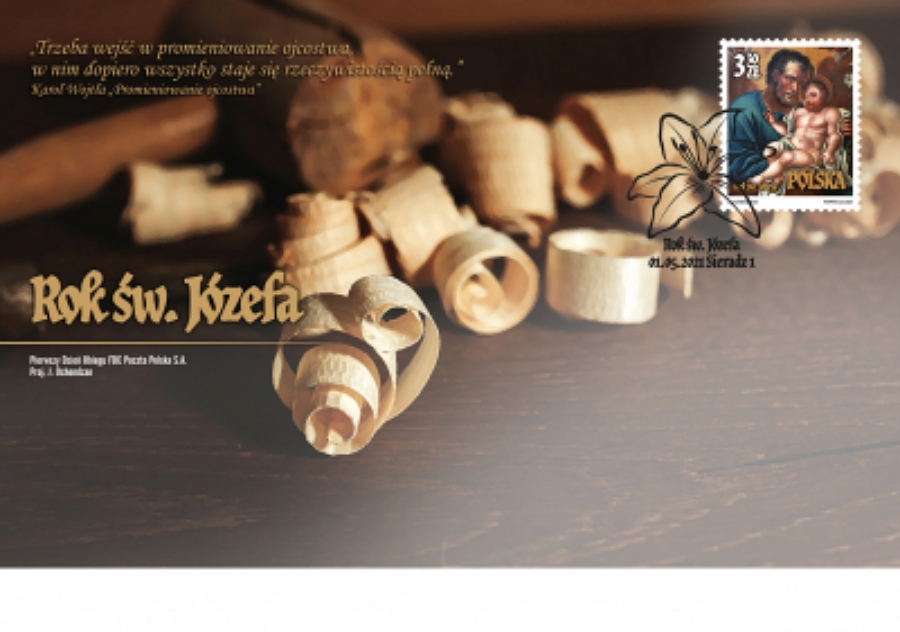 On May 1, 2021, a postage stamp worth PLN 3.30 was put into circulation, i.e. “The Year of St. Joseph”.
The stamp shows the image of St. Joseph with the Child located in the basilica of the smaller church of All Saints in Sieradz, along the lower edge there is the inscription: Year of St. Joseph and the inscription Poland, in the upper left corner there is a value designation: PLN 3.30.
Stamp – an image made with oil technique on canvas. The work was created before 1780. Based on the characteristic characteristics of the style, his authorship can be attributed to Jan Godzek, a painter from Piotrków Trybunalski.
Envelope FDC – symbolic representation of carpentry – the trade of St. Joseph and a quote from the drama “Radiation of Fatherhood” by Karol Wojtyła.
On the date stamp there is a lily – an attribute of St. Joseph.
The stamp was printed in rotoglyur technique, on fluorescent paper, in 25.5 x 31.25 mm format, in 18,000,000
pieces. Sales sheet contains 100 pcs. Stamp.
An FDC envelope will also be issued on this occasion.
Project author: Jarosław Ochendzan

In a new Apostolic Letter entitled Patris corde (“With a Father’s Heart”), Pope Francis describes Saint Joseph as a beloved father, a tender and loving father, an obedient father, an accepting father; a father who is creatively courageous, a working father, a father in the shadows.

The Letter marks the 150th anniversary of Blessed Pope Pius IX’s declaration of St Joseph as Patron of the Universal Church. To celebrate the anniversary, Pope Francis has proclaimed a special “Year of St Joseph,” beginning on the Solemnity of the Immaculate Conception 2020 and extending to the same feast in 2021.

The Holy Father wrote Patris corde against the backdrop of the Covid-19 pandemic, which, he says, has helped us see more clearly the importance of “ordinary” people who, though far from the limelight, exercise patience and offer hope every day. In this, they resemble Saint Joseph, “the man who goes unnoticed, a daily, discreet and hidden presence,” who nonetheless played “an incomparable role in the history of salvation.”

Saint Joseph, in fact, “concretely expressed his fatherhood” by making an offering of himself in love “a love placed at the service of the Messiah who was growing to maturity in his home,” writes Pope Francis, quoting his predecessor St Paul VI.

And because of his role at “the crossroads between the Old and New Testament,” St Joseph “has always been venerated as a father by the Christian people” (PC, 1). In him, “Jesus saw the tender love of God,” the one that helps us accept our weakness, because “it is through” and despite “our fears, our frailties, and our weakness” that most divine designs are realized. “Only tender love will save us from the snares of the accuser,” emphasizes the Pontiff, and it is by encountering God’s mercy especially in the Sacrament of Reconciliation that we “experience His truth and tenderness,” – because “we know that God’s truth does not condemn us, but instead welcomes, embraces, sustains and forgives us” (2).

Joseph is also a father in obedience to God: with his ‘fiat’ he protects Mary and Jesus and teaches his Son to “do the will of the Father.” Called by God to serve the mission of Jesus, he “cooperated… in the great mystery of Redemption,” as St John Paul II said, “and is truly a minister of salvation” (3).

Welcoming the will of God

At the same time, Joseph is “an accepting Father,” because he “accepted Mary unconditionally” — an important gesture even today, says Pope Francis, “in our world where psychological, verbal and physical violence towards women is so evident.” But the Bridegroom of Mary is also the one who, trusting in the Lord, accepts in his life even the events that he does not understand, “setting aside his own ideas” and reconciling himself with his own history.

Joseph’s spiritual path “is not one that explains, but accepts” — which does not mean that he is “resigned.” Instead, he is “courageously and firmly proactive,” because with “Holy Spirit’s gift of fortitude,” and full of hope, he is able “to accept life as it is, with all its contradictions, frustrations and disappointments.” In practice, through St. Joseph, it is as if God were to repeat to us: “Do not be afraid!” because “faith gives meaning to every event, however happy or sad,” and makes us aware that “God can make flowers spring up from stony ground.” Joseph “did not look for shortcuts but confronted reality with open eyes and accepted personal responsibility for it.” For this reason, “he encourages us to accept and welcome others as they are, without exception, and to show special concern for the weak” (4).

Patris corde highlights “the creative courage” of St. Joseph, which “emerges especially in the way we deal with difficulties.” “The carpenter of Nazareth,” explains the Pope, was able to turn a problem into a possibility by trusting in divine providence.” He had to deal with “the concrete problems” his Family faced, problems faced by other families in the world, and especially those of migrants.

In this sense, St. Joseph is “the special patron of all those forced to leave their native lands because of war, hatred, persecution and poverty.” As the guardian of Jesus and Mary, Joseph cannot “be other than the guardian of the Church,” of her motherhood, and of the Body of Christ. “Consequently, every poor, needy, suffering or dying person, every stranger, every prisoner, every infirm person is ‘the child’ whom Joseph continues to protect.” From St Joseph, writes Pope Francis, “we must learn… to love the Church and the poor” (5).

A father who teaches the value, dignity and joy of work

“A carpenter who earned an honest living to provide for his family,” St Joseph also teaches us “the value, the dignity and the joy of what it means to eat bread that is the fruit of one’s own labour.” This aspect of Joseph’s character provides Pope Francis the opportunity to launch an appeal in favour of work, which has become “a burning social issue” even in countries with a certain level of well-being. “there is a renewed need to appreciate the importance of dignified work, of which Saint Joseph is an exemplary patron,” the Pope writes.

Work, he says, “is a means of participating in the work of salvation, an opportunity to hasten the coming of the Kingdom, to develop our talents and abilities, and to put them at the service of society and fraternal communion.” Those who work, he explains, “are cooperating with God himself, and in some way become creators of the world around us.” Pope Francis encourages everyone “to rediscover the value, the importance and the necessity of work for bringing about a new ‘normal’ from which no one is excluded.” Especially in light of rising unemployment due to the Covid-19 pandemic, the Pope calls everyone to “review our priorities” and to express our firm conviction that no young person, no person at all, no family should be without work!” (6).

A father “in the shadows,” centred on Mary and Jesus

Taking a cue from The Shadow of the Father — a book by Polish writer Jan Dobraczyński — Pope Francis describes Joseph’s fatherhood of Jesus as “the earthly shadow of the heavenly Father.”

“Fathers are not born, but made,” says Pope Francis. “A man does not become a father simply by bringing a child into the world, but by taking up the responsibility to care for that child.” Unfortunately, in today’s society, children “often seem orphans, lacking fathers” who are able to introduce them “to life and reality.” Children, the Pope says, need fathers who will not try to dominate them, but instead raise them to be “capable of deciding for themselves, enjoying freedom and exploring new possibilities.”

This is the sense in which St Joseph is described as a “most chaste” father, which is the opposite of domineering possessiveness. Joseph, says Pope Francis, “knew how to love with extraordinary freedom.  He never made himself the centre of things.  He did not think of himself, but focused instead on the lives of Mary and Jesus.”

Happiness for Joseph involved a true gift of self: “In him, we never see frustration, but only trust,” writes Pope Francis. “His patient silence was the prelude to concrete expressions of trust.” Joseph stands out, therefore, as an exemplary figure for our time, in a world that “needs fathers,” and not “tyrants”; a society that “rejects those who confuse authority with authoritarianism, service with servility, discussion with oppression, charity with a welfare mentality, power with destruction.”

True fathers, instead, “refuse to live the lives of their children for them,” and instead respect their freedom. In this sense, says Pope Francis, a father realizes that “he is most a father and an educator at the point when he becomes ‘useless,’ when he sees that his child has become independent and can walk the paths of life unaccompanied.” Being a father, the Pope emphasizes, “has nothing to do with possession, but is rather a ‘sign’ pointing to a greater fatherhood”: that of the “heavenly Father” (7).

A daily prayer to St Joseph… and a challenge

In his letter, Pope Francis notes how, “Every day, for over forty years, following Lauds [Morning Prayer]” he has “recited a prayer to Saint Joseph taken from a nineteenth-century French prayer book of the Congregation of the Sisters of Jesus and Mary.” This prayer, he says, expresses devotion and trust, and even poses a certain challenge to Saint Joseph,” on account of its closing words: “My beloved father, all my trust is in you.  Let it not be said that I invoked you in vain, and since you can do everything with Jesus and Mary, show me that your goodness is as great as your power.”

At the conclusion of his Letter, he adds another prayer to St Joseph, which he encourages all of us to pray together:

Hail, Guardian of the Redeemer,
Spouse of the Blessed Virgin Mary.
To you God entrusted his only Son;
in you Mary placed her trust;
with you Christ became man.

Blessed Joseph, to us too,
show yourself a father
and guide us in the path of life.
Obtain for us grace, mercy, and courage,
and defend us from every evil.  Amen.