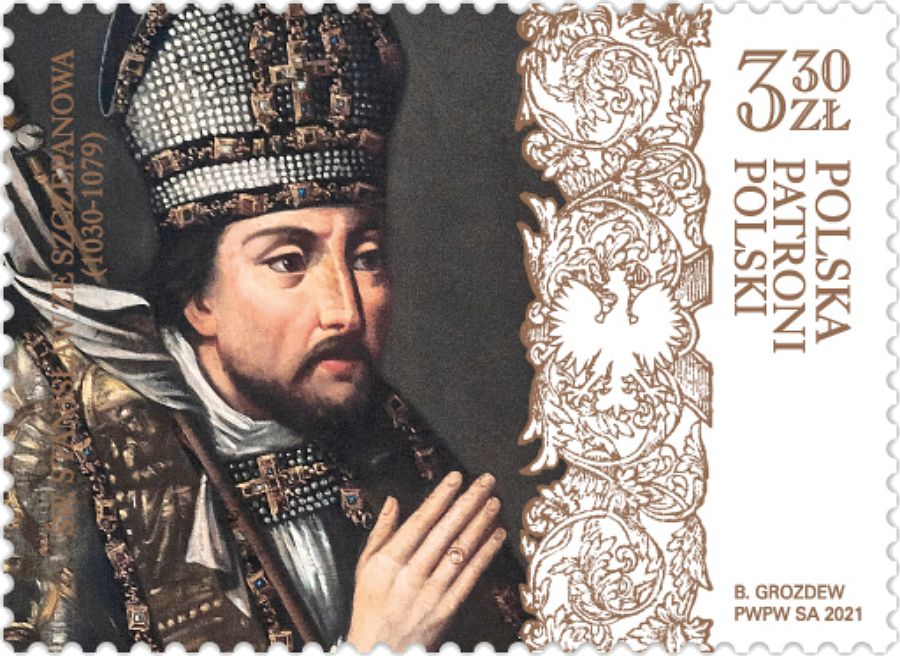 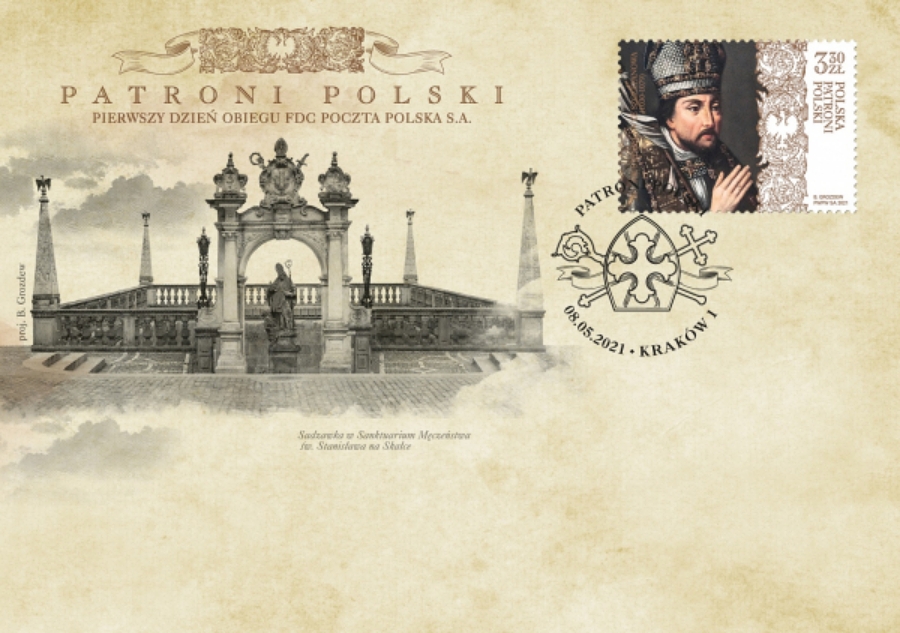 The story Polish is told with postage stamps. On Saturday, May 8th, The Polish Post will put into circulation the fourth stamp of the series “Patrons of Polish”. This year’s issue commemorates the figure of the holy martyr Bishop – Stanislaw of Szczepanów.

The author of the project, Bolydar Grozdew, presented on the stamp the likeness of Saint Stanislaus of Szczepano and a plant ornamental motif with an eagle in the crown. In addition to the stamp, The Polish Post has issued, in a limited version, an FDC envelope, that is, an envelope on the first day of circulation. It depicts a pond in the Sanctuary of Martyrdom of St. Stanislaus on Skałka.

” Everyone knows that St. Stanislaus Bishop is the patron saint of Polish, but few know his character and activities well, and even less know the reasons for his struggle with the king and as a result of martyrdom. That is why The Polish Post wants to get a closer knowledge of this steadfast man in faith and deeds with his latest stamp – says Wiesław Włodek, vice president of the Board of Polish.

Saint Stanislaus of Szczepanów came from a deeply believing family. At the age of about 25, he was ordained a priest. He ran a cathedral school, a library, and preached. Even then he caught the attention of Prince Boleslaw II of The Generous, later king, who soon appointed him bishop. Initially, Stanislaus advised Bolesław on state matters, witnessed his coronation as King Polish,but after numerous wars and land fight, both fell into conflict. Bishop Stanislaus admonished him from the pulpit, and the king in retaliation called him a traitor, which only exacerbated the conflict.

On April 11, 1079, Bishop Stanislaus was assassinated by King Boleslaw II ofSzczodrego during the celebration of mass. For the murder of the bishop, Bolesław lost the crown, and the people turned away from him. Rome stripped the Polishof the title of Christian ruler.

The bishop’s remains were buried in the church on Skałka, and after 10 years in a solemn procession was transferred to the Wawel Cathedral. The Saint is treated as the patron saint of the unification of the shattered and Polish piastów. For centuries he was a symbol of resistance to tyranny.

This is the fourth release in the series “Patrons Polish“. In 2018, the Company introduced a postage stamp with the likeness of St. Stanislaus Kostka, and in 2019 the value commemorating St. Wojciech. Last year, however, brought a philatelistic publishing house depicting the likeness of St. Andrzej Boboli.

This and other philatelistic publications of The Polish Post can be purchased in post offices and online store: www.filatelistyka.poczta-polska.pl

Stanislaus of Szczepanów, or Stanisław Szczepanowski, (July 26, 1030 – April 11, 1079) was a Bishop of Kraków known chiefly for having been martyred by the Polish king Bolesław II the Generous. Stanislaus is venerated in the Roman Catholic Church as Saint Stanislaus the Martyr (as distinct from the 16th-century Jesuit Stanislaus Kostka).

According to tradition, Stanisław was born at Szczepanów, a village in Lesser Poland, the only son of the noble and pious Wielisław and Bogna. He was educated at a cathedral school in Gniezno (then the capital of Poland) and later, according to different sources, in Paris or Liège. On his return to Poland, Stanisław was ordained a priest by Lambert II Suła, Bishop of Kraków. He was subsequently made pastor of Czembocz near Cracow, canon and preacher at the cathedral, and later, vicar-general.

After the Bishop’s death (1072), Stanisław was elected his successor but accepted the office only at the explicit command of Pope Alexander II. Stanisław was one of the earliest native Polish bishops. He also became a ducal advisor and had some influence on Polish politics.

Stanisław’s major accomplishments included bringing papal legates to Poland, and reestablishment of a metropolitan see in Gniezno. The latter was a precondition for Duke Bolesław’s coronation as king, which took place in 1076. Stanisław then encouraged King Bolesław to establish Benedictine monasteries to aid in the Christianization of Poland.

The cult of Saint Stanisław the martyr began immediately upon his death. In 1245 his relics were translated (i.e., moved) to Kraków’s Wawel Cathedral. In the early 13th century, Bishop Iwo Odrowąż initiated preparations for Stanisław’s canonization and ordered Wincenty of Kielce to write the martyr’s vita. On September 17, 1253, at Assisi, Stanisław was canonized by Pope Innocent IV.

Pope Pius V did not include the Saint’s feast day in the Tridentine Calendar for use throughout the Roman Catholic Church. Subsequently, Pope Clement VIII inserted it, setting it for May 7, but Kraków observes it on May 8, a supposed date of the Saint’s death, having done so since May 8, 1254, when it was attended by many Polish bishops and princes. In 1969, the Church moved the feast to April 11, considered to be the date of his death in 1079.

As the first native Polish saint, Stanisław is the patron of Poland and Kraków, and of some Polish dioceses. He shares the patronage of Poland with Saint Adalbert of Prague, Florian, and Our Lady the Queen of Poland.

Wawel Cathedral, which holds the Saint’s relics, became a principal national shrine. Almost all the Polish kings beginning with Władysław I the Elbow-high were crowned while kneeling before Stanisław’s sarcophagus, which stands in the middle of the cathedral. In the 17th century, King Władysław IV Vasa commissioned an ornate silver coffin to hold the Saint’s relics. It was destroyed by Swedish troops during the Deluge, but was replaced with a new one ca. 1670.

Saint Stanisław’s veneration has had great patriotic importance. In the period of Poland’s feudal fragmentation, it was believed that Poland would one day reintegrate as had the members of Saint Stanisław’s body. Half a millennium after Poland had indeed reintegrated, and while yet another dismemberment of the polity was underway in the Partitions of the Polish–Lithuanian Commonwealth, the framers of the Polish Constitution of May 3, 1791, would dedicate this progressive political document to Saint Stanisław Szczepanowski, whose feast day fell close to the date of the Constitution’s adoption.

Each year on the first Sunday following May 8, a procession, led by the Bishop of Kraków, goes out from Wawel to the Church on the Rock.[4] The procession, once a local event, was popularized in the 20th century by Polish Primate Stefan Wyszyński and Archbishop of Kraków, Karol Wojtyła. Wojtyla, as Pope John Paul II, called Saint Stanisław the patron saint of moral order and wanted his first papal return to Poland to occur in April 1979 in observance of the 900th anniversary to the day of his martyrdom, but the Communist rulers of that time blocked this, causing the visit to be delayed until June of that year.

In iconography, Saint Stanisław is usually depicted as a bishop holding a sword, the instrument of his martyrdom, and sometimes with Piotr rising from the dead at his feet.