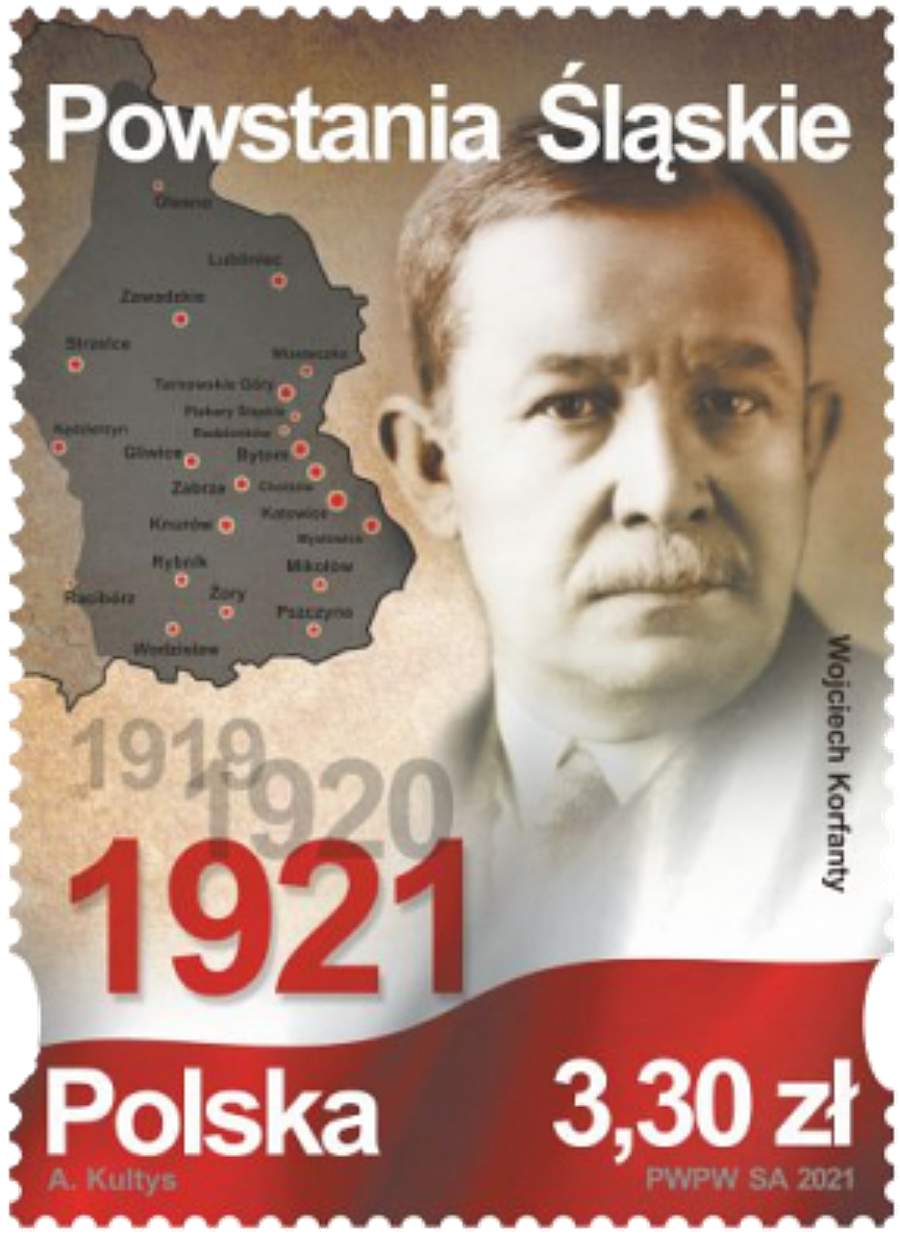 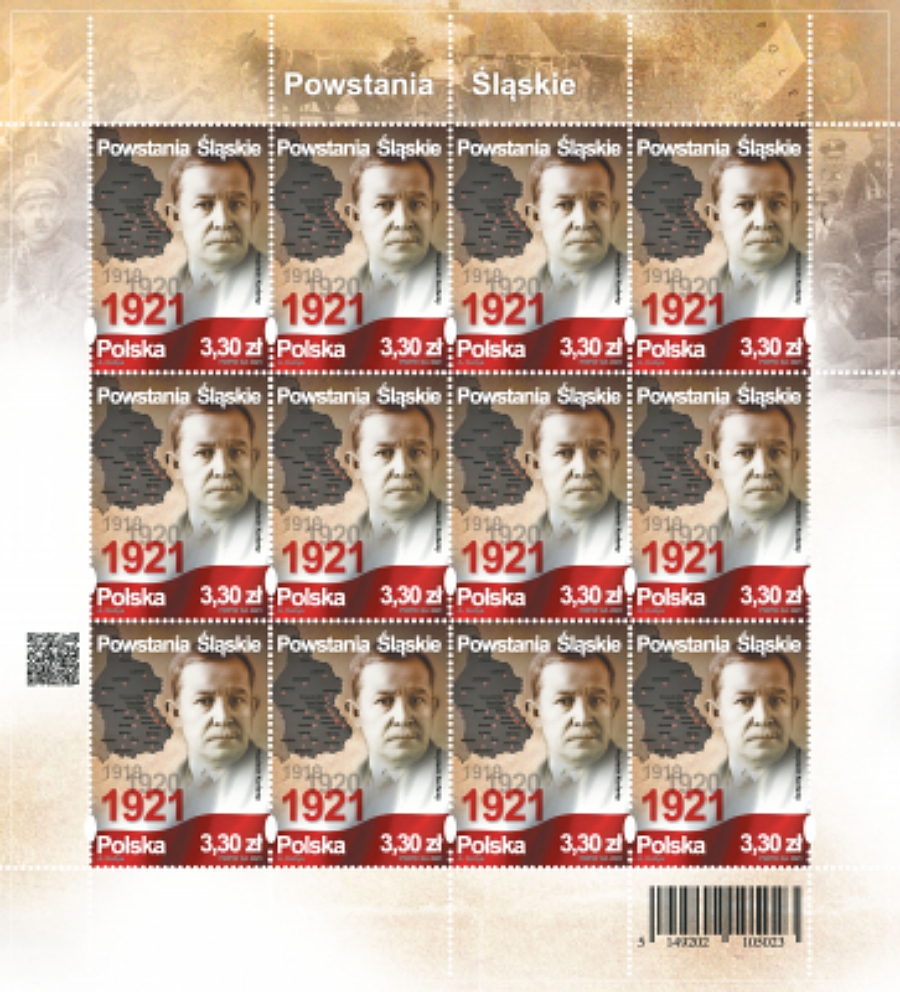 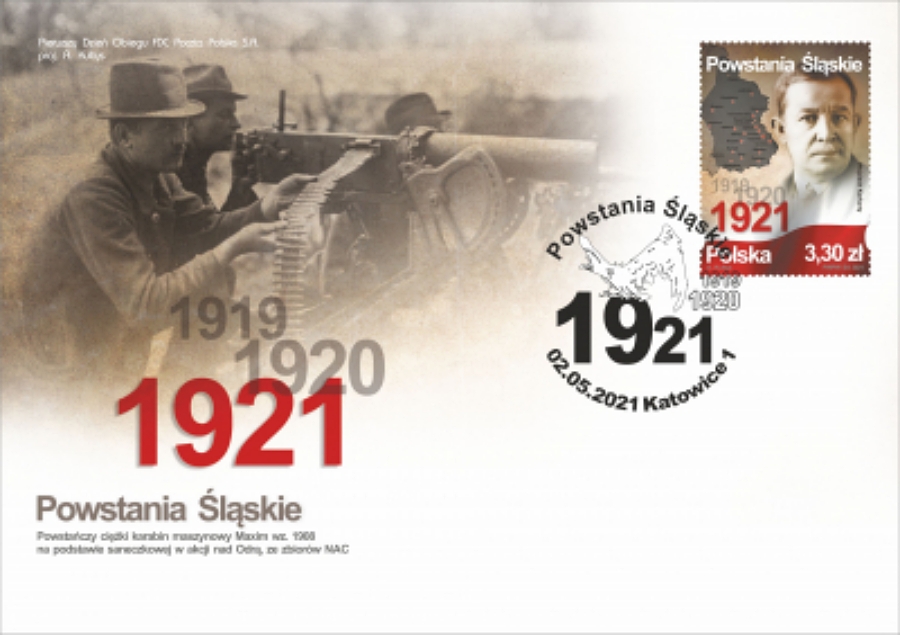 On May 2, 2021, a postage stamp worth PLN 3.30 was put into circulation to issue the “Silesian Uprisings”.
The stamp was printed in offset technique, on fluorescent paper, in a stamp format of 31.25 x 43 mm, in a print of 168,000 pieces. The sheet contains 12 stamps.
The stamp shows the figure of Wojciech Korfanty, and on the left is a map of the scope of the 3rd Silesian Uprising. In the lower part of the stamp there is an image of the Polish flag, while in the central part the annual dates of the outbreak of the Silesian Uprisings were indicated: 1919, 1920, 1921. 1908 on the basis of tobogganing in action us Oder.
An FDC envelope will also be issued on this occasion. Author of the stamp project: Adam Kultys Arkusik broadcast “Silesian Uprisings” will be included in the subscription to the arkusiki.

The Silesian Uprisings (German: Aufstände in Oberschlesien; Polish: Powstania śląskie) were a series of three uprisings from August 1919 to July 1921 in Upper Silesia, which was part of the Weimar Republic at the time. Ethnic Polish separatists, seeking to have the area transferred to the newly founded Polish Republic, fought German police and paramilitary forces, as the former sought to keep the area part of the new German state founded after World War I. Following the conflict, the area was divided between the two countries. The rebellions have subsequently been commemorated in modern Poland as an example of Polish nationalism.

The Third Silesian Uprising (Polish: Trzecie powstanie śląskie) was the last, largest and longest of the three wars. It included the Battle of Annaberg and began in the aftermath of a plebiscite that yielded mixed results. The British and French governments could not reach a consensus on the interpretation of the plebiscite. The primary problem was the disposition of the “Industrial Triangle” east of the Oder river, whose triangle ends were marked by the cities of Beuthen (Bytom), Gleiwitz (Gliwice) and Kattowitz (Katowice), all three of which were mostly inhabited by ethnic Germans. The French wanted to weaken Germany, and thus supported Polish claims on the territory; the British and the Italians disagreed, in part because the German government declared that a loss of the Silesian industries would render Germany incapable of paying the demanded war reparations.

In late April 1921, rumors spread that the British position would prevail, prompting the local Polish activists to organize an uprising. The insurrection was to begin in early in May. Having learned from previous failures, the Third War was carefully planned and organized under the leadership of Wojciech Korfanty. It started on 2–3 May 1921, with the destruction of German rail bridges (see “Wawelberg Group”) in order to slow down the movement of German reinforcements. A particular concern was to prevent the recurrence of violent acts against Polish civilians by members of the Freikorps, demobilized Imperial German army units that had refused to disband. These paramilitary units existed throughout Germany and usually acted independently from both the provisional official army and the leadership of the fledgling German Republic.

The Inter-Allied Commission, in which General Henri Le Rond was the most influential individual, waited rather long prior to taking any steps to end the violence. The French troops generally favored the insurrection, while within some cases, British and Italian contingents actively cooperated with Germans. UK Prime Minister Lloyd George’s speech in the British Parliament, strongly disapproving of the insurrection, aroused the hopes of some Germans. but the Entente appeared to have no troops ready and available for dispatch. The only action the ‘Inter-Allied Military Control Commission’ and the French government made was demanding immediate prohibition of the recruiting of German volunteers from outside Upper Silesia, and this was promptly made public.

After the initial success of the insurgents in taking over a large portion of Upper Silesia, the German Grenzschutz several times resisted the attacks of Wojciech Korfanty’s Polish troops, in some cases with the cooperation of British and Italian troops. An attempt on the part of the British troops to take steps against the Polish forces was prevented by General Jules Gratier, the French commander-in-chief of the Allied troops. Eventually, the insurgents kept most of territory they had won, including the local industrial district. They proved that they could mobilize large amounts of local support, while the German forces based outside Silesia were barred from taking an active part in the conflict.

Twelve days after the outbreak of the insurrection, Korfanty offered to take his troops behind a line of demarcation (the “Korfanty Line”), conditional on the released territory not being re-occupied by German forces, but by Allied troops. It was not, however, until 1 July that the British troops arrived in Upper Silesia and began to advance in company with those of the other Allies towards the former frontier. Simultaneously, with this advance, the Inter-Allied Commission pronounced a general amnesty for the illegal actions committed during the insurrection, with the exception of acts of revenge and cruelty. The German Grenzschutz was withdrawn and disbanded.

Wojciech Korfanty (born Adalbert Korfanty, 20 April 1873 – 17 August 1939) was a German and Polish activist, journalist and politician, who served as a member of the German parliaments, the Reichstag and the Prussian Landtag, and later, in the Polish Sejm. Briefly, he also was a paramilitary leader, known for organizing the Polish Silesian Uprisings in Upper Silesia, which after World War I was contested by Germany and Poland. Korfanty fought to protect Poles from discrimination and the policies of Germanisation in Upper Silesia before the war and sought to join Silesia to Poland after Poland regained its independence.

Following the Third Silesian Uprising, the German authorities were forced to leave their positions by the League of Nations. Poland was allotted by the League of Nations roughly half of the population and valuable mining districts, which were eventually attached to Poland. Korfanty was accused by Germans of organizing terrorism against German civilians of Upper Silesia. German propaganda newspapers also “smeared” him with ordering the murder of Silesian politician Theofil Kupka.

Korfanty was a member of the national Sejm from 1922 to 1930 and in the Silesian Sejm (1922–1935), where he represented a Christian Democratic viewpoint. He opposed the autonomy of the Silesian Voivodship, which he saw as an obstacle against its reintegration into Poland. However, he defended the rights of the German minority in Upper Silesia because he believed that the prosperity of minorities enriched the whole society of a region.

He briefly acted as vice-premier in the government of Wincenty Witos (October–December 1923). From 1924, he resumed his journalist activities as editor-in-chief of the papers Rzeczpospolita (“The Republic”, not to be confused with the modern newspaper of the same name) and Polonia. He opposed the May Coup of Józef Piłsudski and the subsequent establishment of Sanacja. In 1930, Korfanty was arrested and imprisoned in the Brest-Litovsk fortress, together with other leaders of the Centrolew, an alliance of left-wing and centrist parties in opposition to the ruling government.

In 1935, he was forced to leave Poland and emigrated to Czechoslovakia, from where he participated in the centre-right Morges Front group, founded by émigrés Ignacy Paderewski and Władysław Sikorski. After the German invasion of Czechoslovakia, Korfanty moved on to France. He returned to Poland in the April 1939, after Nazi Germany had cancelled the Polish-German non-aggression pact of 1934, hoping that the renewed threat to Polish independence would help overcome the domestic political cleavage. He was arrested immediately upon arrival. In August, he was released as unfit for prison because of his bad health and died shortly afterwards, two weeks before World War II began with the German invasion of Poland. Although the cause of death remains unclear, it has been claimed that the treatment he received in prison may have caused his health to deteriorate.

Today, many streets, places and institutions are named after him. When Opole Silesia became part of Poland in 1945, the town of Friedland in Oberschlesien, in German Upper Silesia, was renamed Korfantów in his honor.