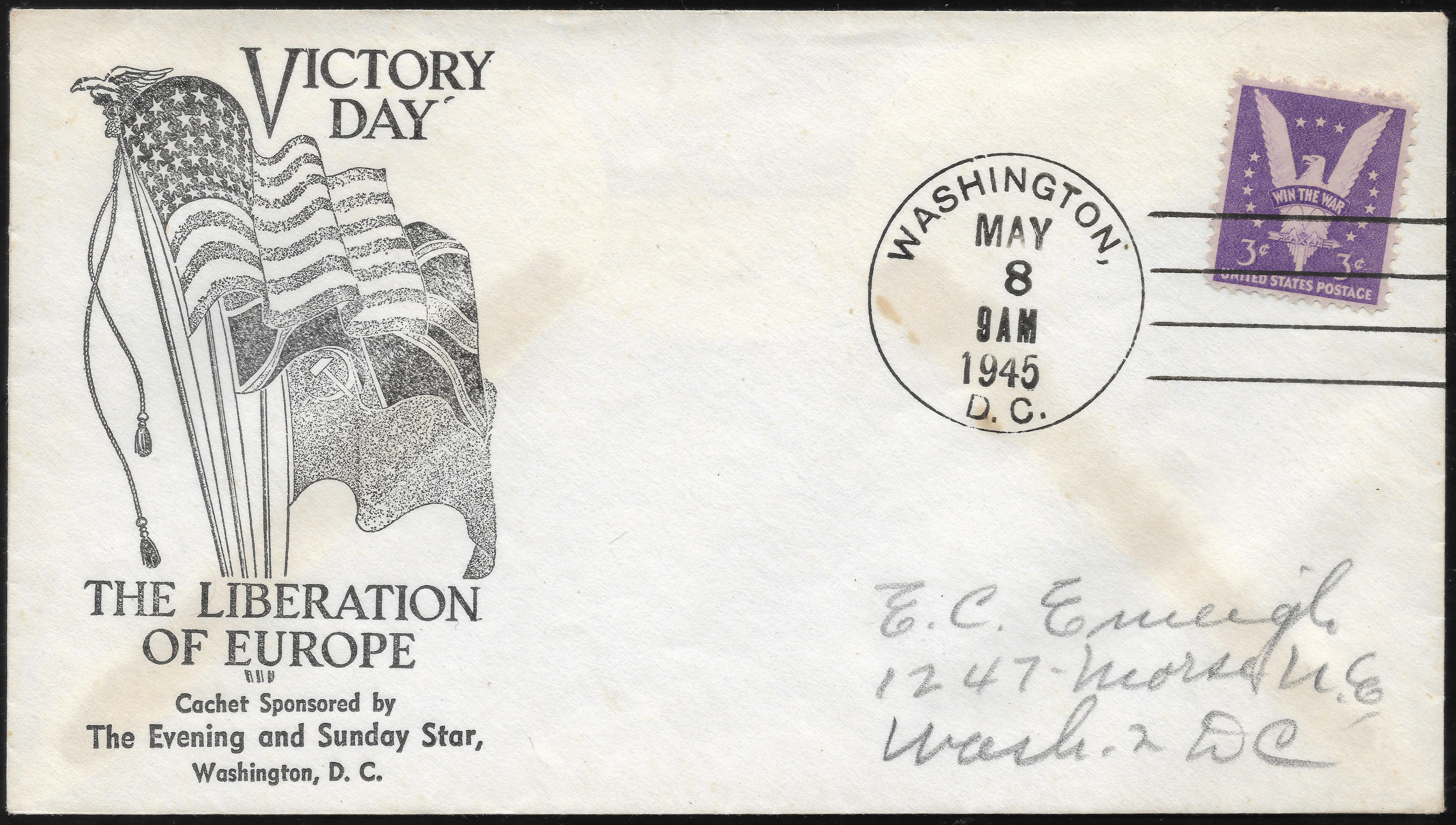 8 May 1945 saw cities and towns throughout Great Britain and the United States, as well as formerly occupied communities in Western Europe, put out flags and banners, rejoicing in the defeat of the Nazi war machine and marking the end of World War II.

The eighth of May spelled the day when German troops throughout Europe finally laid down their arms: In Prague, Germans surrendered to their Soviet antagonists, after the latter had lost more than 8,000 soldiers, and the Germans considerably more; in Copenhagen and Oslo; at Karlshorst, near Berlin; in northern Latvia; on the Channel Island of Sark, the German surrender was realized in a final cease-fire. More surrender documents were signed in Berlin and in eastern Germany.

The main concern of many German soldiers was to elude the grasp of Soviet forces, to keep from being taken prisoner. About 1 million Germans attempted a mass exodus to the West when the fighting in Czechoslovakia ended, but were stopped by the Russians and taken captive. The Russians took approximately 2 million prisoners in the period just before and after the German surrender.

Meanwhile, more than 13,000 British POWs were released and sent back to Great Britain.

Pockets of German-Soviet confrontation would continue into the next day. On 9 May, the Soviets would lose 600 more soldiers in Silesia before the Germans finally surrendered. Consequently, V-E Day was not celebrated until the ninth in Moscow, with a radio broadcast salute from Stalin himself: “The age-long struggle of the Slav nations… has ended in victory. Your courage has defeated the Nazis. The war is over.”

Today, I present my sole cover from Victory in Europe Day postmarked at 9am on 8 May 1945 at Washington, D.C., bearing U.S. Scott #905. The 3-cent violet “Win the War” stamp was issued on 4 July 1942. Following the 7 December 1941 Japanese attack on Pearl Harbor, it didn’t take long before Americans around the country began writing the Post Office Department and the White House requesting stamps representing America’s dedication to winning the war.

The selected design for the stamp was based on a poster by artist Mark O’Dea picturing the American eagle. When he received the early designs, President Roosevelt liked the stamp, but suggested that the eagle have very little engraving, to make it stand out from the background.

Surprisingly, when the stamp was issued, it received such negative criticism, many speculated it would be removed from sale and reissued. The problem with the design lay in the direction of the eagle’s gaze and arrows. Historically, depictions of the American eagle in wartime pictured the eagle facing the same direction his arrows pointed, so that both the eagle and weapons are directed toward their objectives. Some have speculated that President Roosevelt realized this, and deliberately accepted the printed design, so that the weapons point toward the enemy while the eagle looks the other way, toward peace.

Despite criticisms over the design, the Bureau of Engraving and Printing printed 20,642,793,310 copies of the Win the War stamp and it was one of the most commonly used 3¢ stamps during the war. It was often sent on mail to U.S. soldiers fighting overseas. The stamp was later honored in the 100 Greatest U.S. Stamps book. 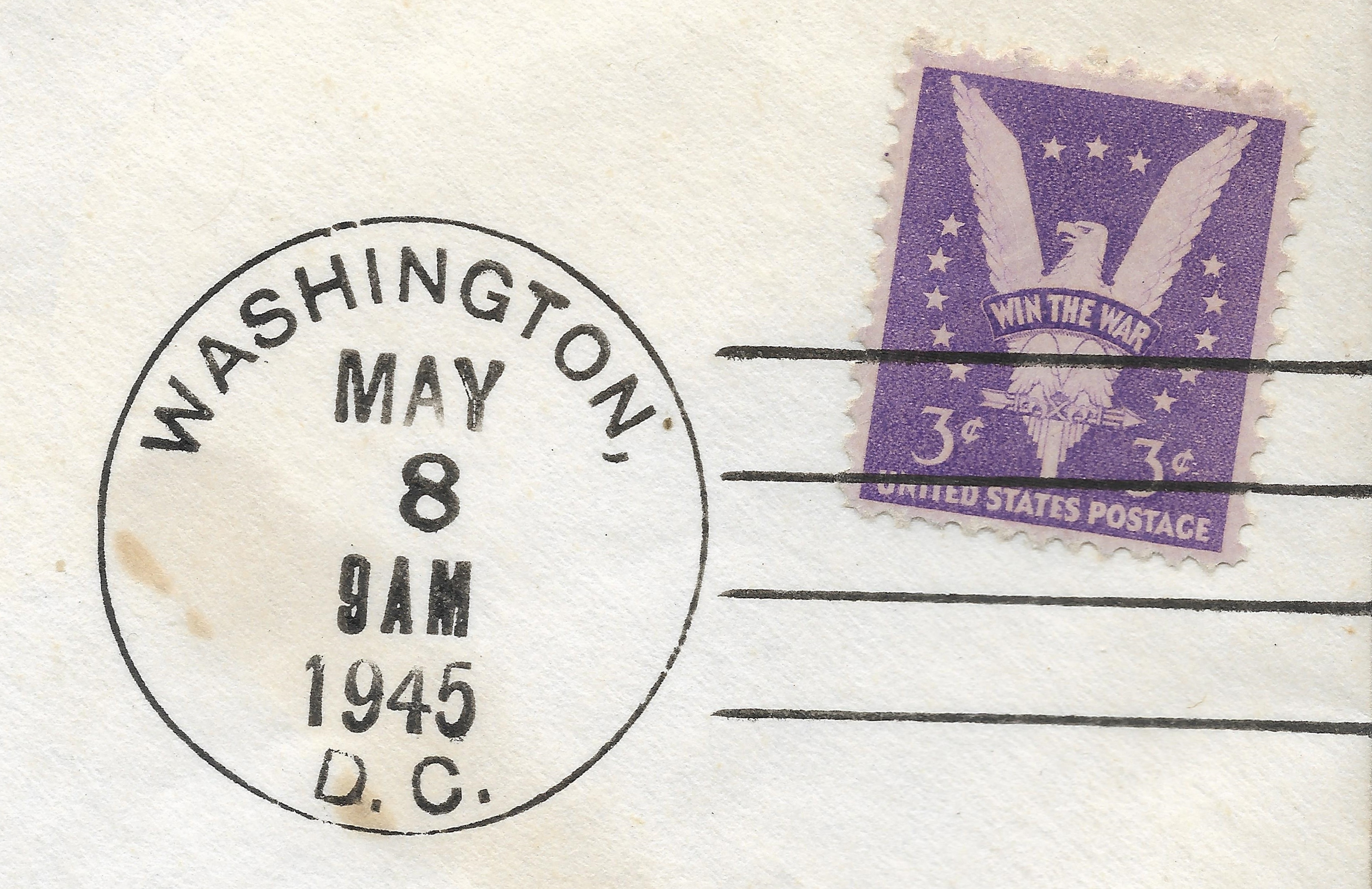 For much more on the end of the war and the celebrations that followed, please see my 2020 article on A Stamp A Day. There are lots of photographs as well!