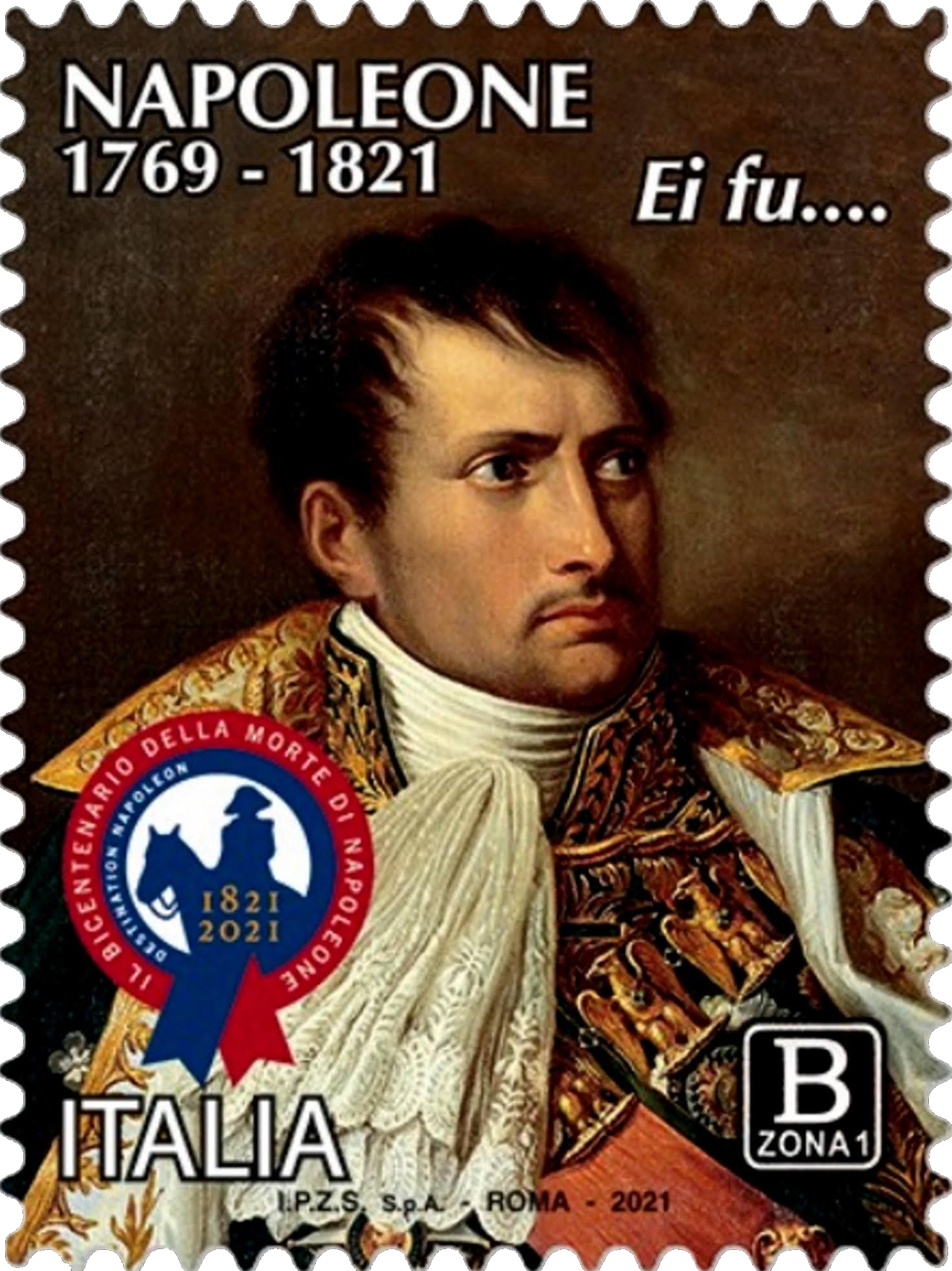 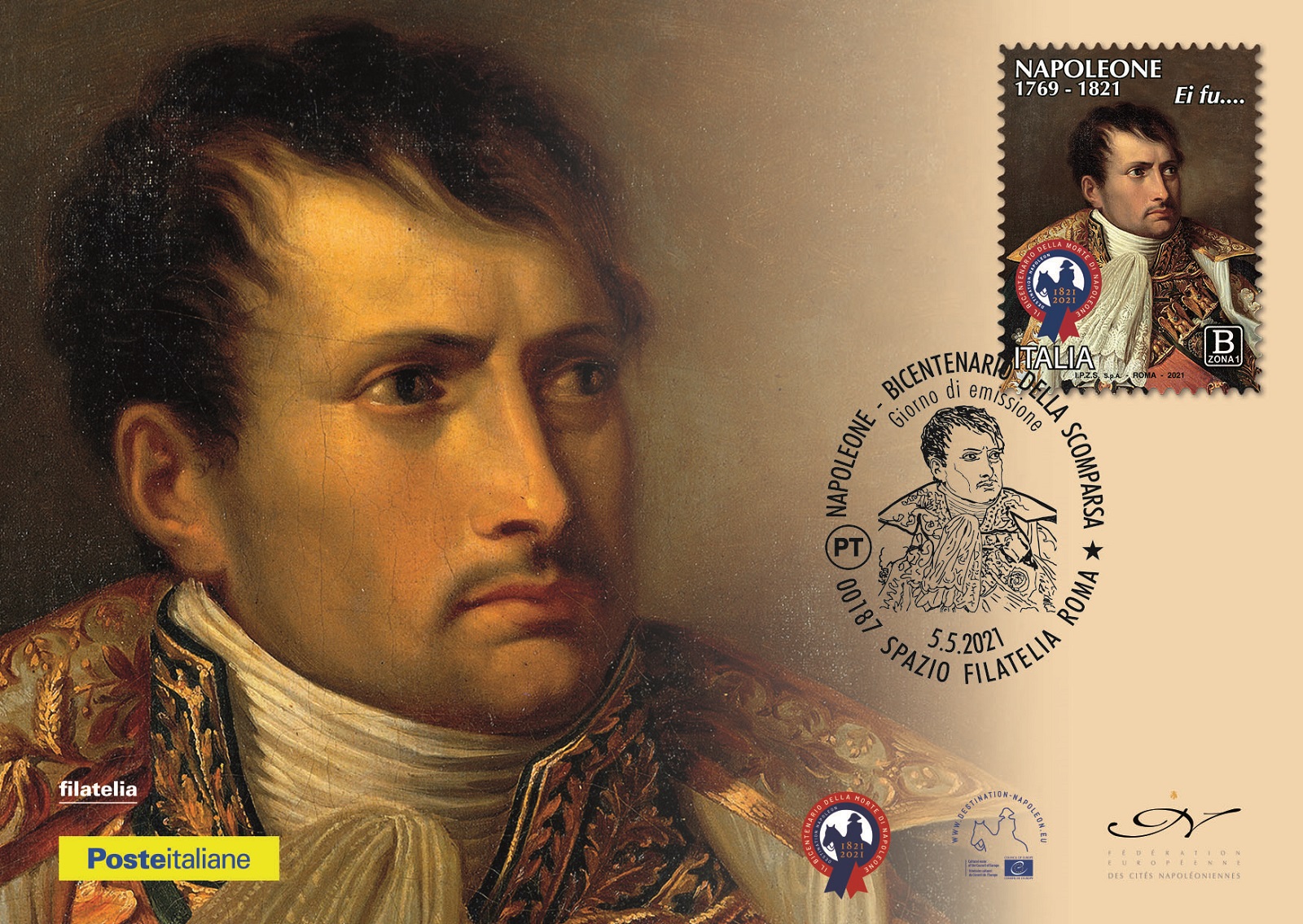 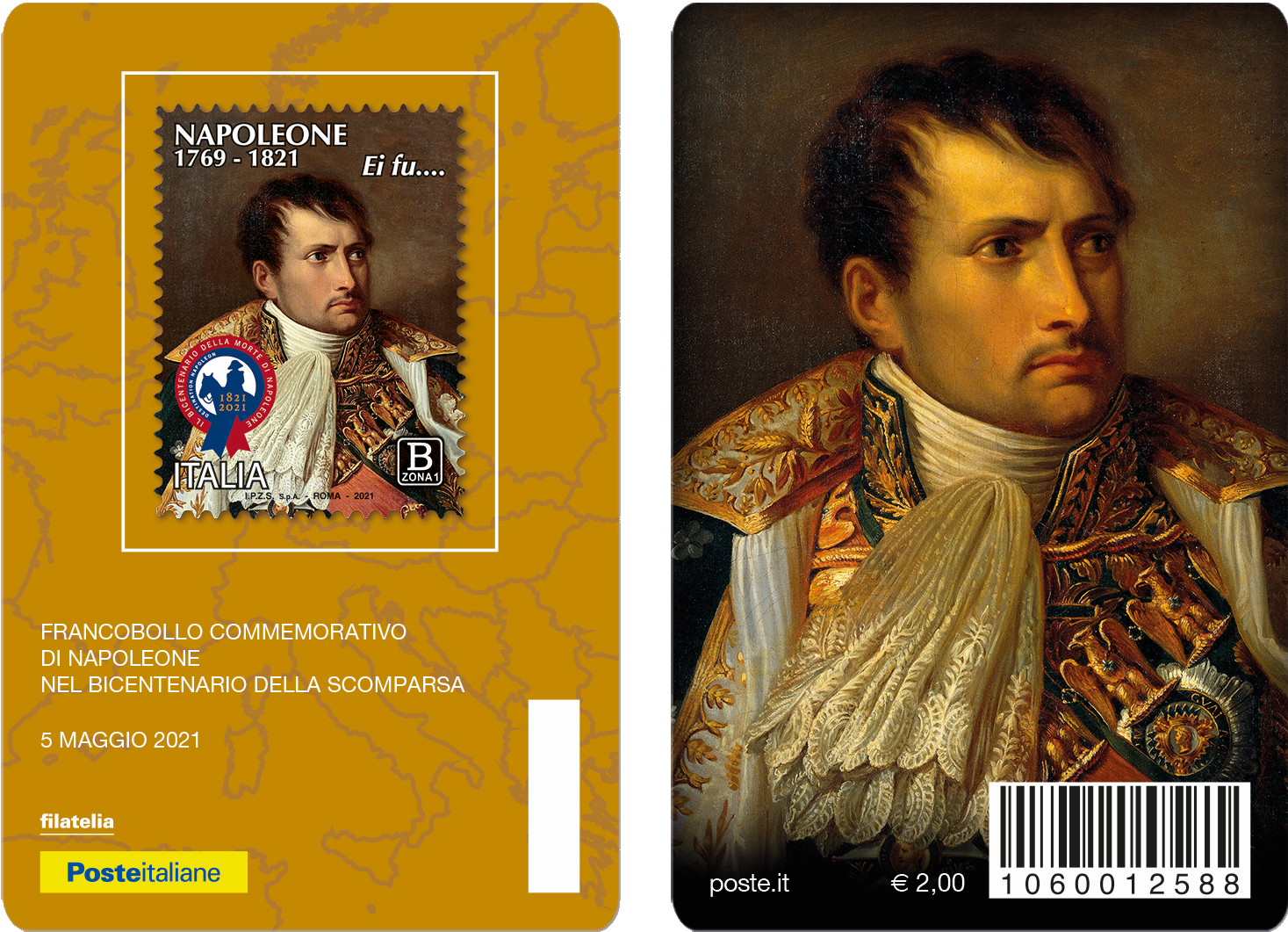 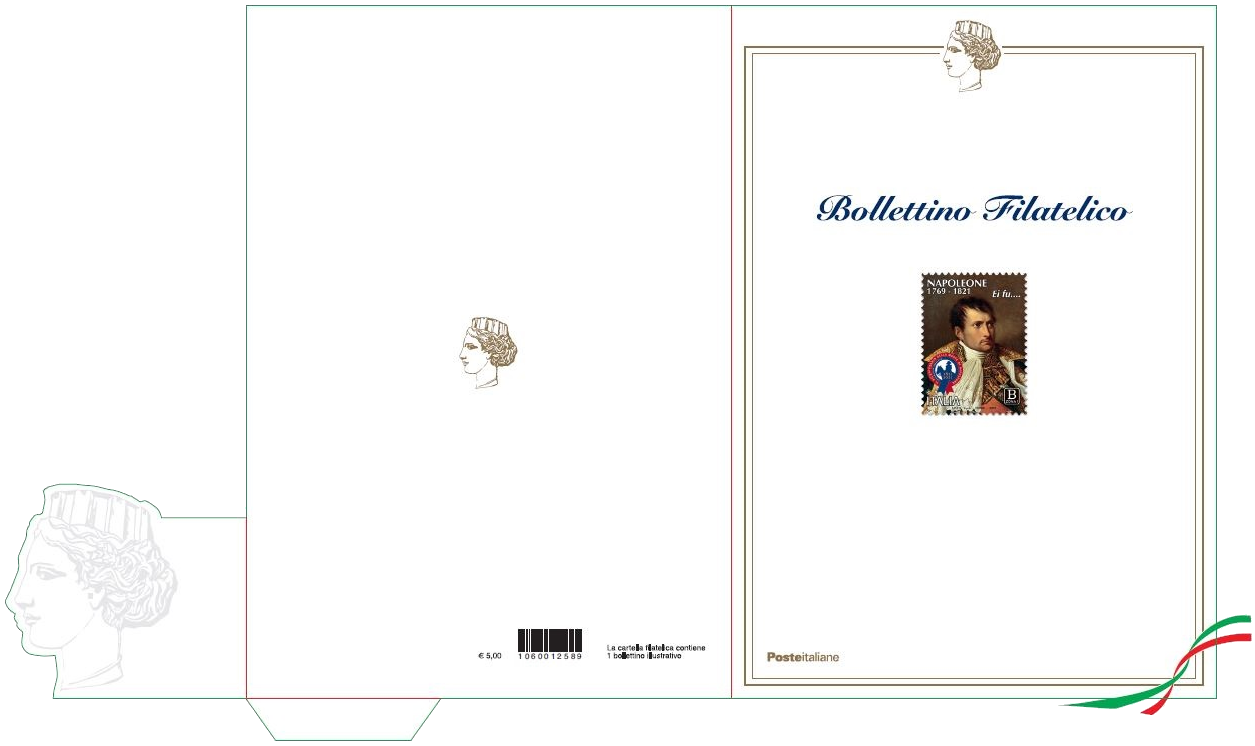 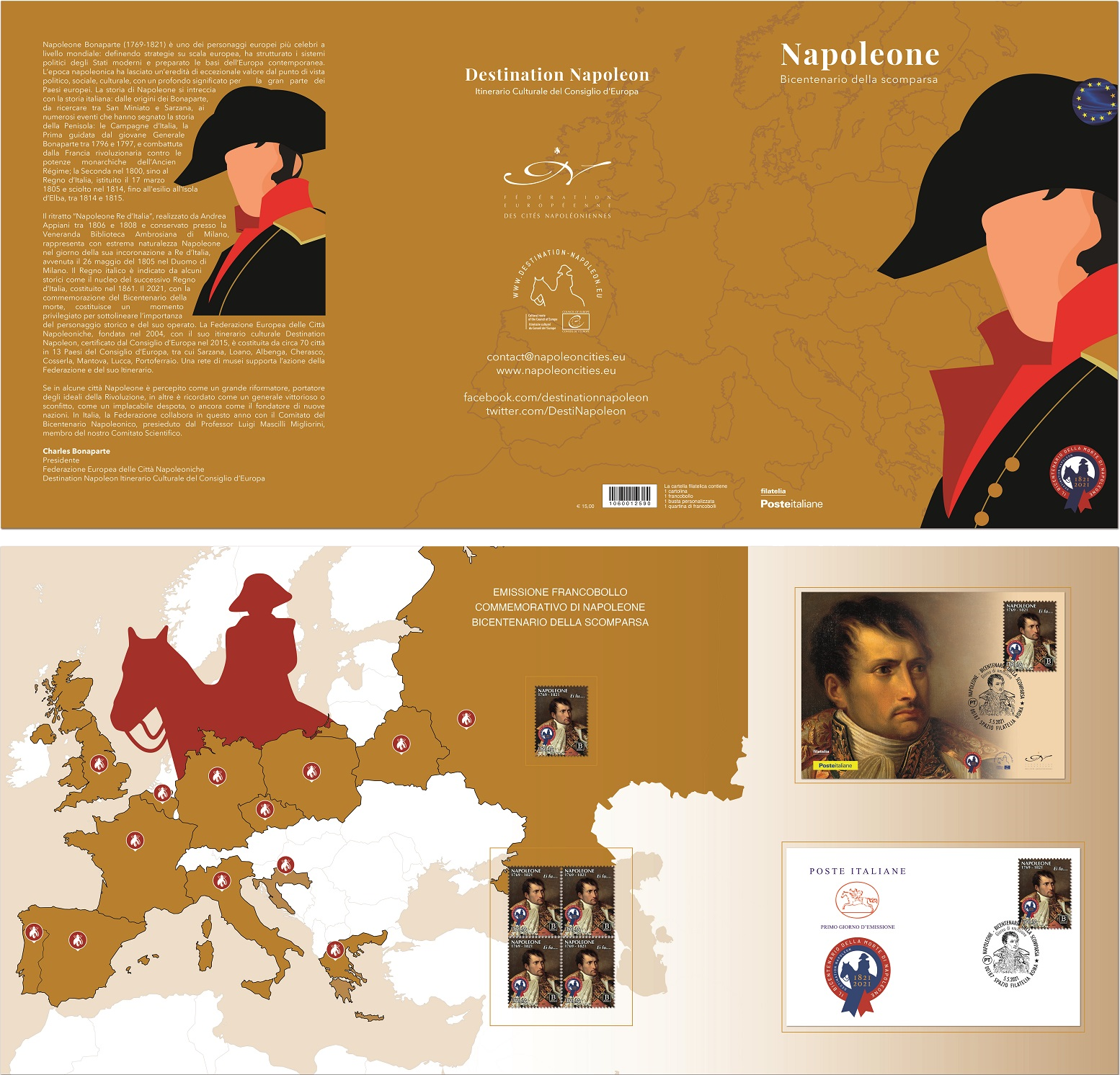 IN SHORT
Issue date: May 5, 2021
Issue of a commemorative stamp of Napoleon, on the bicentenary of his death
DESCRIPTION
Value: tariff B zone 1.
Circulation: five hundred thousand copies.
Vignette: reproduces a painting by Andrea Appiani called “Portrait of Napoleon King of Italy”, preserved in the Pinacoteca Ambrosiana at the Veneranda Biblioteca Ambrosiana in Milan; below, on the left, the logo of the European Federation of Napoleonic Cities is reproduced for the Bicentenary of the death of Napoleon. The stamp is completed by the legends “NAPOLEON”, “1769 – 1821”, “EI FU ….”, the writing “ITALIA” and the tariff indication “B ZONA 1”.
Sketch: edited by the Philatelic Center of the Operations Management of the Polygraphic Institute and State Mint S.p.A.
Printing: Istituto Poligrafico e Zecca dello Stato S.p.A., in rotogravure.
Colors: six.
Paper: white, neutral coated, self-adhesive, non-fluorescent.
Weight: 90 gsm.
Backing: white paper, single-silicone Kraft paper of 80 g / m2.
Adhesive: water-based acrylic type, distributed in quantities of 20 g / m2 (dry).
Paper size and print size: 30 x 40 mm.
Tracing format: 37 x 46 mm.
Perforation: 11 carried out with punching.
Sheet: forty-five specimens.

Philatelic Bulletin –
DESCRIPTION
Illustrative bulletin with an article signed by Charles Bonaparte, President of the European Federation of Napoleonic Cities and Angelo di Stasi, President of the Commission for the study and processing of postal cards of the Ministry of Economic Development.
The bulletin is placed inside a personalized folder with flap.
Folder format:
Dimensions: cm. 25 x 17,5 (closed)
Paper: Ivory watercolor of 240 g / m2
Printing: in four-color process with elements in gold foil and screen printing
Notes: The folder shows the price of the product, the barcode for sale and the anti-counterfeiting stamp with the numbering / indication of the print run.

Napoléon Bonaparte (15 August 1769 – 5 May 1821) was a French military and political leader. He rose to prominence during the French Revolution and led several successful campaigns during the Revolutionary Wars. As Napoleon I, he was Emperor of the French from 1804 until 1814 and again in 1815. Napoleon dominated European and global affairs for more than a decade while leading France against a series of coalitions in the Napoleonic Wars. He won most of these wars and the vast majority of his battles, building a large empire that ruled over continental Europe before its final collapse in 1815. One of the greatest commanders in history, his wars and campaigns are studied at military schools worldwide. He remains one of the most celebrated and controversial political figures in human history.

Napoleon had an extensive and powerful impact on the modern world, bringing liberal reforms to the numerous territories that he conquered and controlled, especially the Low Countries, Switzerland, and large parts of modern Italy and Germany. He implemented fundamental liberal policies in France and throughout Western Europe.[b] His lasting legal achievement, the Napoleonic Code, has been highly influential. Roberts says, “The ideas that underpin our modern world—meritocracy, equality before the law, property rights, religious toleration, modern secular education, sound finances, and so on—were championed, consolidated, codified and geographically extended by Napoleon. To them he added a rational and efficient local administration, an end to rural banditry, the encouragement of science and the arts, the abolition of feudalism and the greatest codification of laws since the fall of the Roman Empire.”

Born Napoleone di Buonaparte on the island of Corsica not long after its annexation by the Kingdom of France, Napoleon’s modest family descended from minor Italian nobility. He supported the French Revolution in 1789 while serving in the French army, and tried to spread its ideals to his native Corsica. He rose rapidly in the Army after he saved the governing French Directory by firing on royalist insurgents. In April 1796, he began his first military campaign against the Austrians and their Italian allies, scoring a series of decisive victories and becoming a national hero. Two years later, he led a military expedition to Egypt that served as a springboard to political power.

He engineered a coup in November 1799 and became First Consul of the Republic. Intractable differences with the British meant that the French were facing the War of the Third Coalition by 1805. Napoleon shattered this coalition with decisive victories in the Ulm Campaign, and a historic triumph at the Battle of Austerlitz, which led to the elimination of the Holy Roman Empire. In 1806, the Fourth Coalition took up arms against him because Prussia became worried about growing French influence on the continent. Napoleon quickly knocked out Prussia at the battles of Jena and Auerstedt, then marched the Grand Army deep into Eastern Europe, annihilating the Russians in June 1807 at Friedland, and forcing the defeated nations of the Fourth Coalition to accept the Treaties of Tilsit. Two years later, the Austrians challenged the French again during the War of the Fifth Coalition, but Napoleon solidified his grip over Europe after triumphing at the Battle of Wagram.

Hoping to extend the Continental System (embargo of Britain), Napoleon invaded Iberia and declared his brother Joseph the King of Spain in 1808. The Spanish and the Portuguese revolted with British support. The Peninsular War lasted six years, featured brutal guerrilla warfare, and culminated in a defeat for Napoleon. Napoleon launched an invasion of Russia in the summer of 1812. The resulting campaign witnessed the catastrophic retreat of Napoleon’s Grand Army and encouraged his enemies. In 1813, Prussia and Austria joined Russian forces in a Sixth Coalition against France. A chaotic military campaign culminated in a large coalition army defeating Napoleon at the Battle of Leipzig in October 1813. The coalition invaded France and captured Paris, forcing Napoleon to abdicate in April 1814.

Napoleon was exiled to the island of Elba, between Corsica and Italy. In France, the Bourbons were restored to power. However, Napoleon escaped from Elba in February 1815 and took control of France. The Allies responded by forming a Seventh Coalition, which ultimately defeated Napoleon at the Battle of Waterloo in June 1815. The British exiled him to the remote island of Saint Helena in the South Atlantic. His death in 1821 at the age of 51 was received with shock and grief throughout Europe.