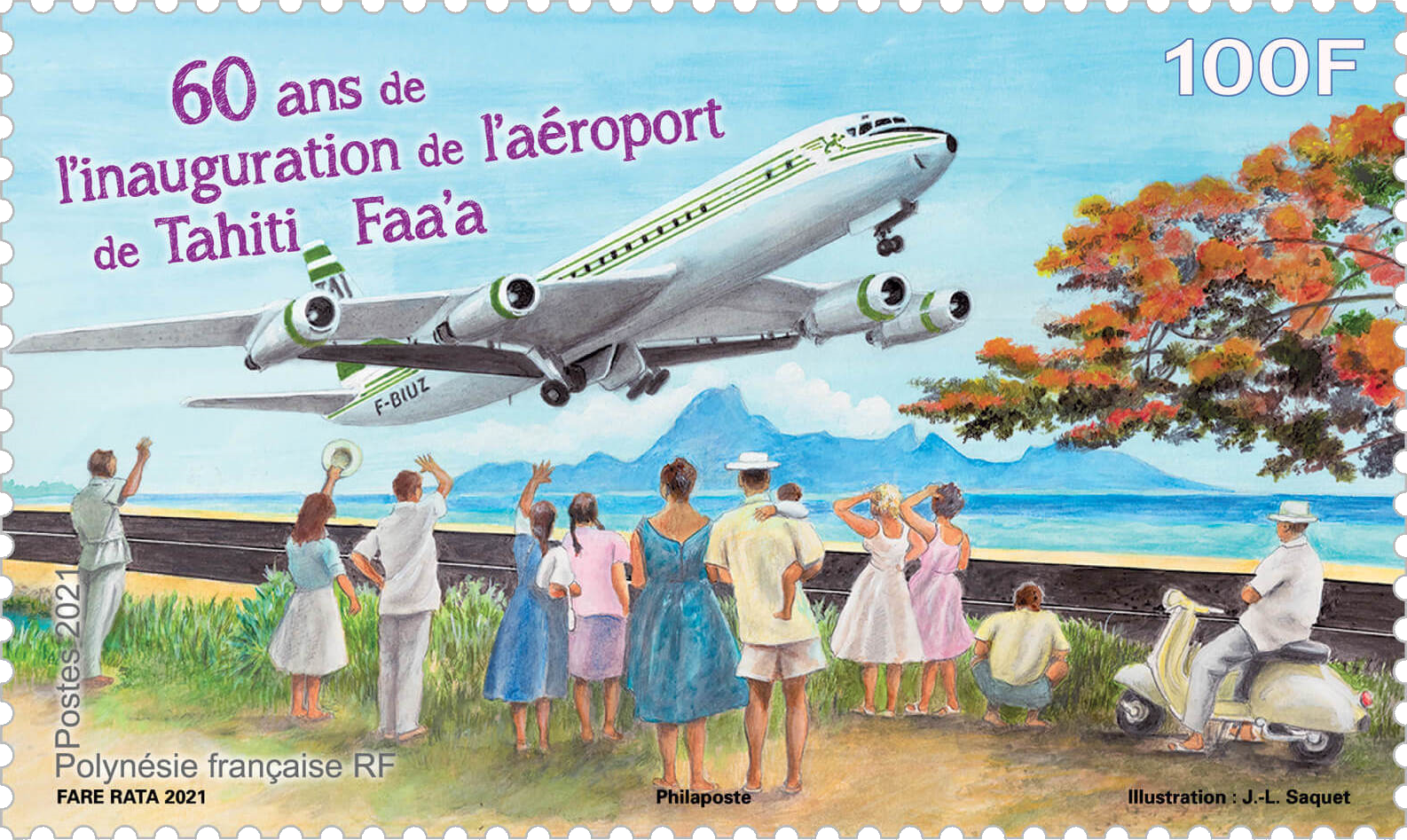 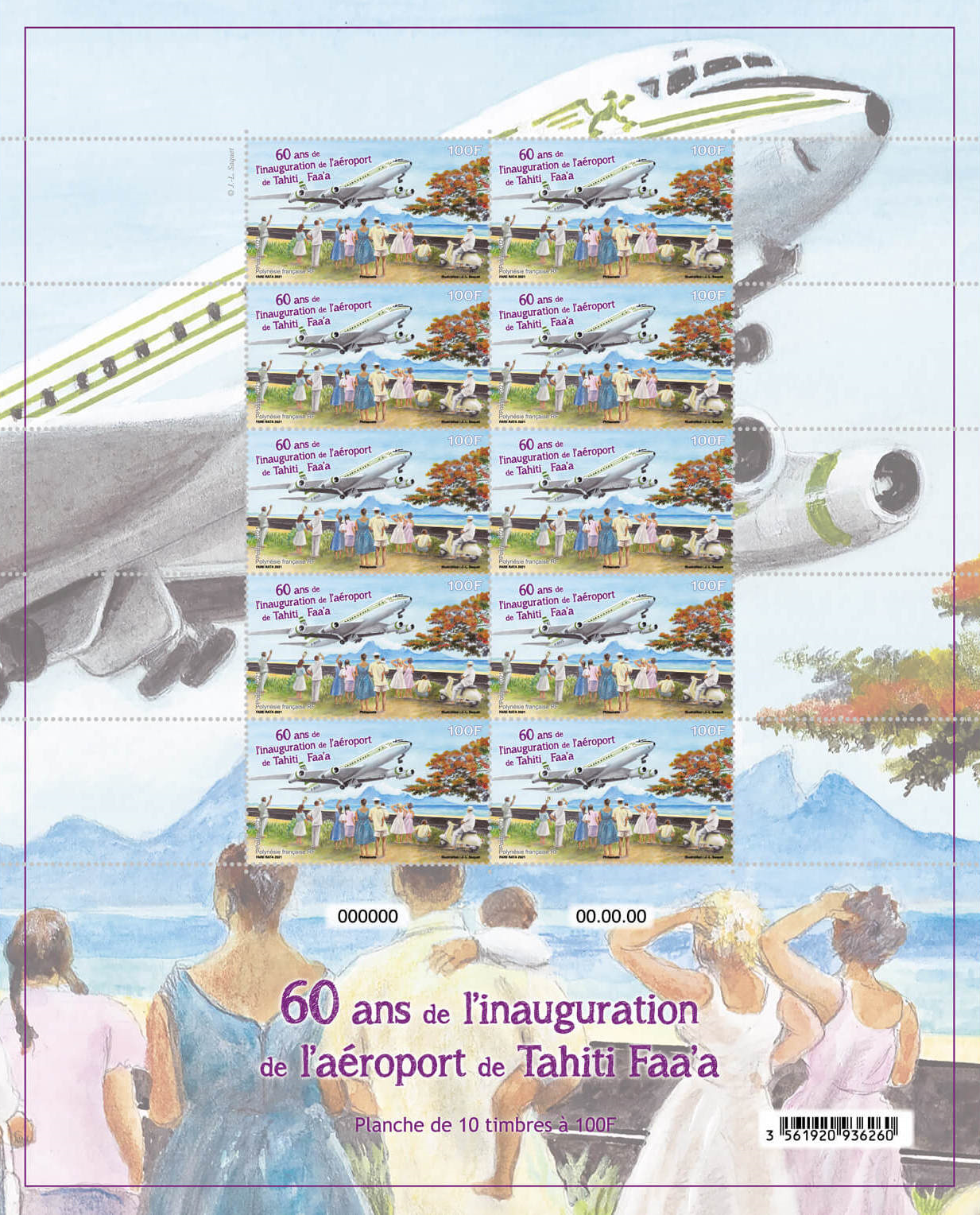 Faa’a International Airport serves both domestic and international flights. Air Tahiti has daily flights to most other islands in French Polynesia and one international service to the Cook Islands. There are intercontinental flights to Canada, Chile, Metropolitan France, Japan, New Zealand and the United States. The airport is on Tahiti, which is an island among the Windward Islands, the eastern part of the Society Islands. Because of limited level terrain, rather than leveling large stretches of sloping agricultural land, the airport is built primarily on reclaimed land on the coral reef just offshore.

Prior to the construction of the airport, Papeete was served by Short Sandringham “Bermuda” flying boat seaplanes operated by Reseau Aerien Interinsulaire (RAI). There was a connecting service via Bora Bora Airport (BOB) to Los Angeles with an en route stop in Honolulu flown by Transports Aeriens Intercontinentaux (TAI), which was serving Bora Bora in 1960 with Douglas DC-7C propliners. Later the same year, following the opening of the new airport, TAI began serving Papeete directly with DC-7C flights once a week on a round trip routing of Nouméa (NOU) – Nadi (NAN) – Papeete (PPT) – Honolulu (HNL) – Los Angeles (LAX). U.S. based air carrier South Pacific Air Lines was also serving Papeete in 1960, with weekly nonstop flights to Honolulu operated with Lockheed L-1049 Super Constellation propliners. By 1962, South Pacific was operating weekly nonstop Super Constellation service to Pago Pago in American Samoa in addition to its flights to Honolulu.

Transports Aériens Intercontinentaux then introduced Douglas DC-8 jet service and in 1962 was operating nonstop DC-8 flights to Los Angeles, Honolulu and Nadi. The latter flight continued on to Nouméa, with connecting DC-8 service being flown to Paris via Nouméa in association with Air France via a number of intermediate stops en route.[8] TAI subsequently merged with Union Aéromaritime de Transport in 1963 to form Union de Transports Aériens (UTA), which in turn continued to serve Papeete with DC-8 jet flights. In 1964, UTA was operating nonstop DC-8 service to Los Angeles, Honolulu and Nadi as well as direct one stop service to Nouméa, with the flights to Los Angeles offering connecting service to and from Air France nonstop flights between LAX and Paris Orly Airport (ORY).

By the mid 1960s, Pan American World Airways (Pan Am) was operating nonstop Boeing 707 jetliner flights to Los Angeles and Auckland, with direct one stop service to San Francisco via Los Angeles, and also direct to Honolulu via a stop at Pago Pago in American Samoa. By 1976, Pan Am was operating direct 707 service once a week to Dallas/Fort Worth and on to New York JFK Airport via stops in Pago Pago and Honolulu, and by 1979 was operating all of its flights from the airport with Boeing 747 wide body aircraft.

LAN-Chile, the predecessor of LATAM Chile, introduced Douglas DC-6B propliner service between the airport and Santiago, Chile via a stop at Easter Island during the late 1960s, and by 1970 was operating Boeing 707 jet service from Santiago via Easter Island to Papeete, with direct connecting 707 service via its Santiago hub from Buenos Aires and Rio de Janeiro in South America as well as from Madrid, Paris and Frankfurt in Europe.[13] LATAM Chile currently flies the Papeete – Easter Island – Santiago route with Boeing 787 aircraft.

In 1970, Union de Transports Aériens was operating all flights into the airport with long range Douglas DC-8-62 jetliners. UTA then introduced McDonnell Douglas DC-10-30 wide body jet service between Papeete and Los Angeles during the mid 1970s. By 1979, UTA was operating all of its Papeete flights with DC-10-30 jets, with nonstops to Los Angeles, Auckland and Nadi, and direct one stop service to Sydney and Nouméa as well as multistop service to Jakarta, Singapore, Bahrain and Paris Charles de Gaulle Airport (CDG). In 1983, UTA was operating Boeing 747 service into the airport in addition to its DC-10-30 flights.

The airport was previously served by several other international airlines, including AOM French Airlines and Qantas, with flights not only to their respective home countries but also to Los Angeles. In 1965, Qantas was also operating a service it called the “Fiesta Route” with a Boeing 707 flying round trip once a week on a routing of Sydney – Nadi – Papeete – Acapulco – Mexico City – Nassau – Bermuda – London Heathrow Airport. By 1976, Qantas was operating twice weekly nonstop Boeing 707 service to Vancouver, Canada in addition to its flights to Nadi and Sydney. In 1991, French air carrier Minerve (airline) was operating McDonnell Douglas DC-10-30 service once a week on a routing of Papeete – San Francisco – Paris Orly Airport.

Air New Zealand has served Tahiti for many years and was operating Douglas DC-8 jet service in 1968 with a routing of Auckland – Papeete – Los Angeles. In 1983, Air New Zealand was operating direct one stop, no change of plane Boeing 747 service twice a week between London Gatwick Airport (LGW) and Papeete via Los Angeles. By 1987, the airline was operating weekly nonstop Boeing 747 service to Dallas/Fort Worth (DFW) with this flight originating in Auckland and continuing on to London Gatwick (LGW) from DFW. Air New Zealand currently operates nonstop Boeing 787-9 service several days a week between the airport and Auckland.

In early 1989, five airlines were operating nonstop wide body jetliner flights from Papeete to Los Angeles (LAX) including Air France, Air New Zealand and Qantas with all three operating Boeing 747 service while at the same time Continental Airlines and UTA were both operating McDonnell Douglas DC-10 service on the route with a combined total of ten nonstops a week being operated by the five air carriers to LAX. From LAX, the Air France flights continued on to Paris Charles de Gaulle (CDG) while the Qantas flights continued on to San Francisco (SFO). In addition, UTA was operating three DC-10 flights a week nonstop to San Francisco (SFO) at this same time with two of these flights continuing on to Paris Charles de Gaulle (CDG) while the third flight continued on to LAX.

Air Tahiti Nui, which is based at the airport, was operating nonstop service between Papeete and New York JFK Airport during the mid 2000s with Airbus A340-300 aircraft; however, the airline was no longer flying this route by 2009.[33] Air Tahiti Nui currently operates nonstop flights to Auckland, Los Angeles and Tokyo as well as direct service to Paris via Los Angeles and has added new Boeing 787-9 “Dreamliner” aircraft to its fleet.

In October 2017, the airport received its first charter flight from China, a Hainan Airlines Airbus A330.