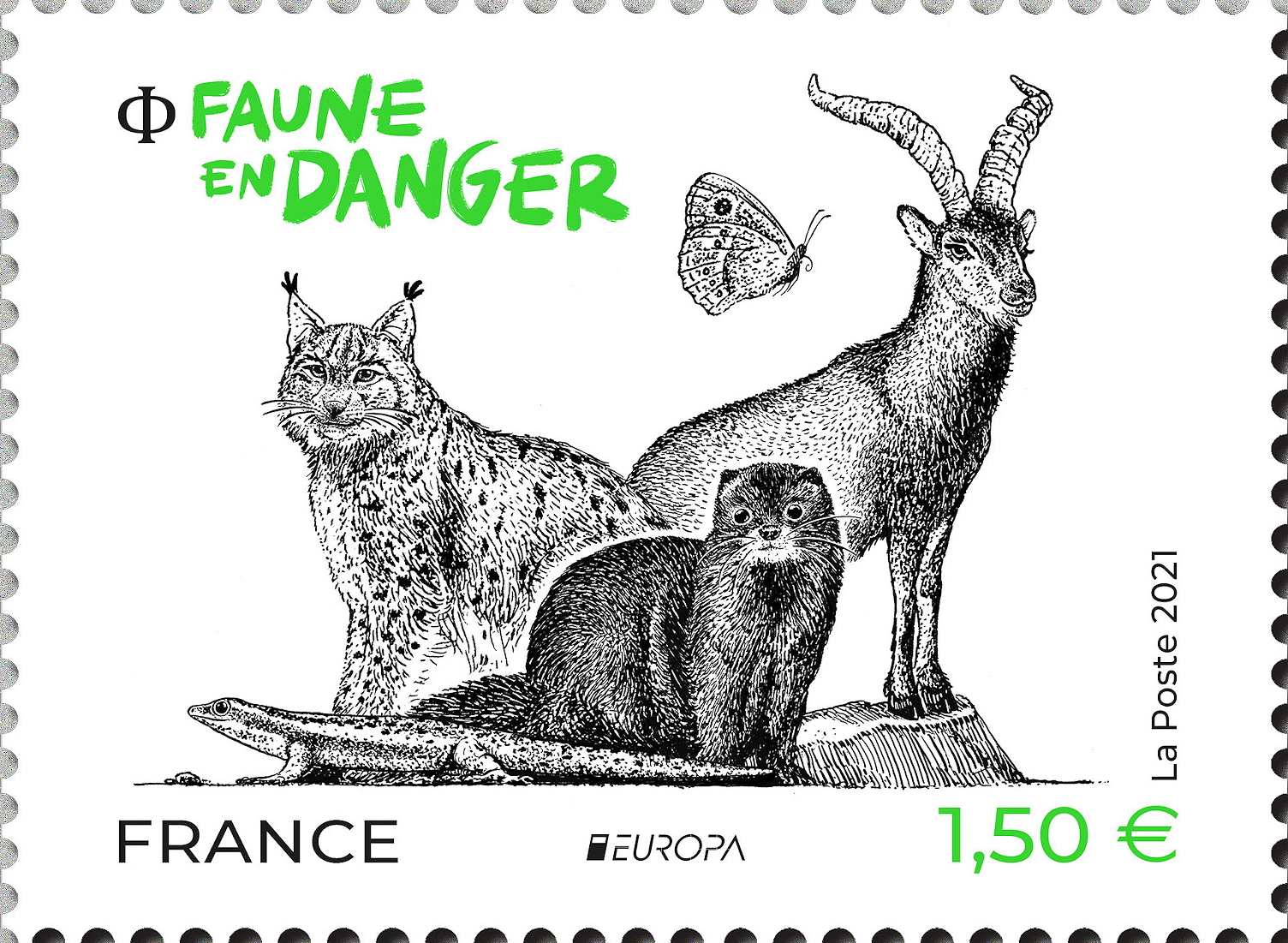 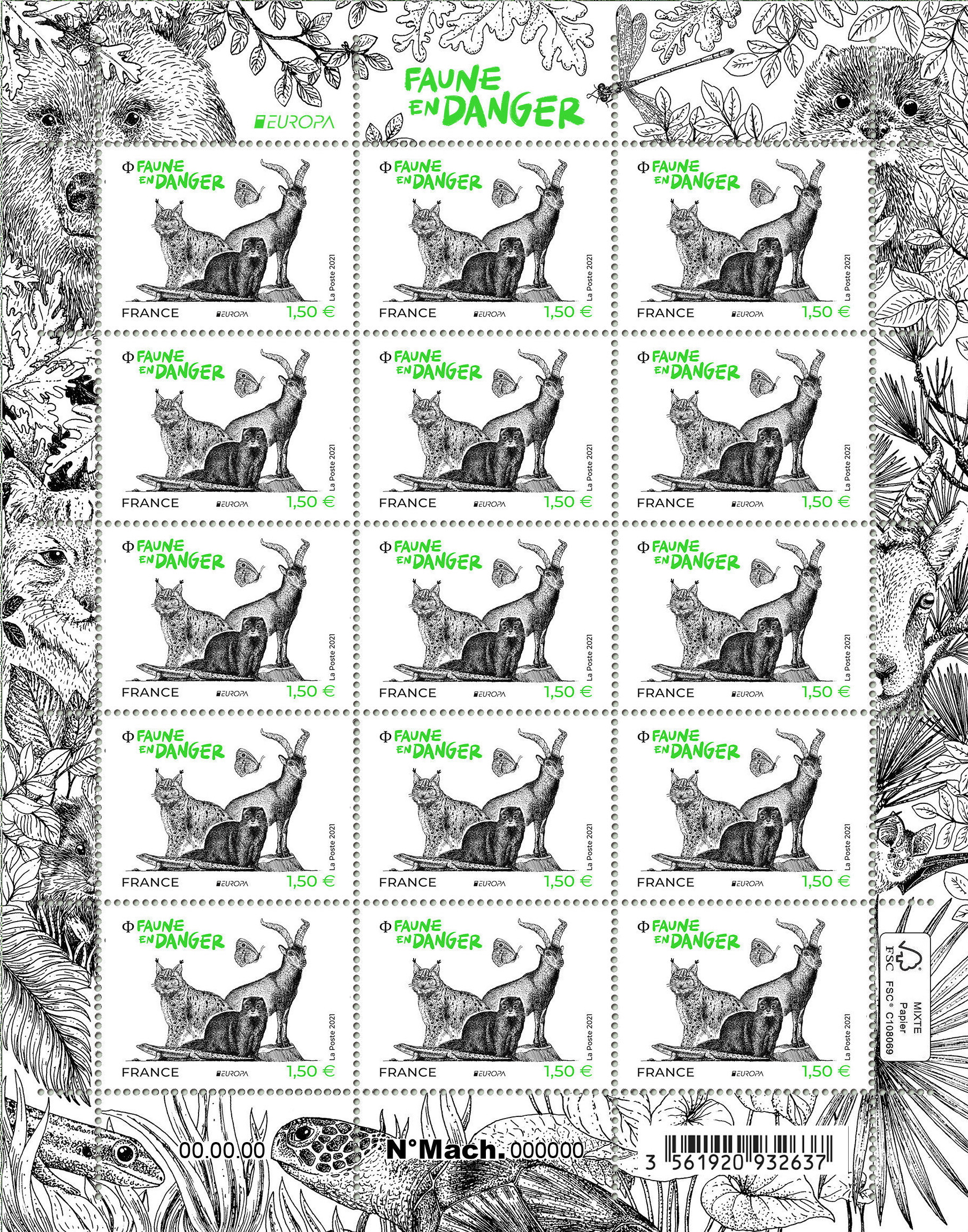 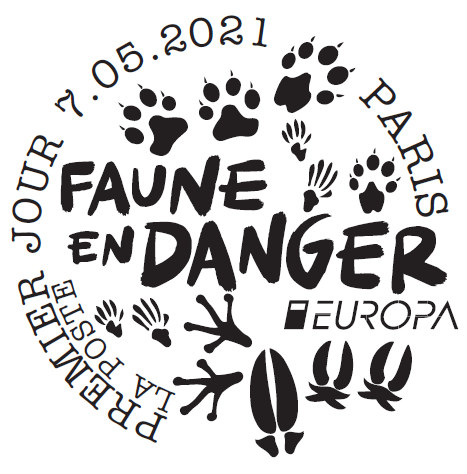 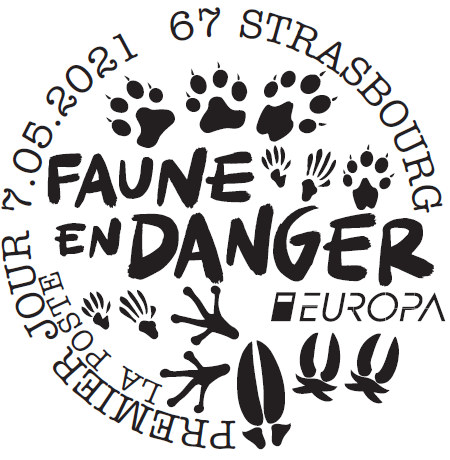 The stamp represents the Northern Lynx, the Vison of Europe, the Green Gecko of Manapany, the Mélibée butterfly, and the Iberian Bouquetin. 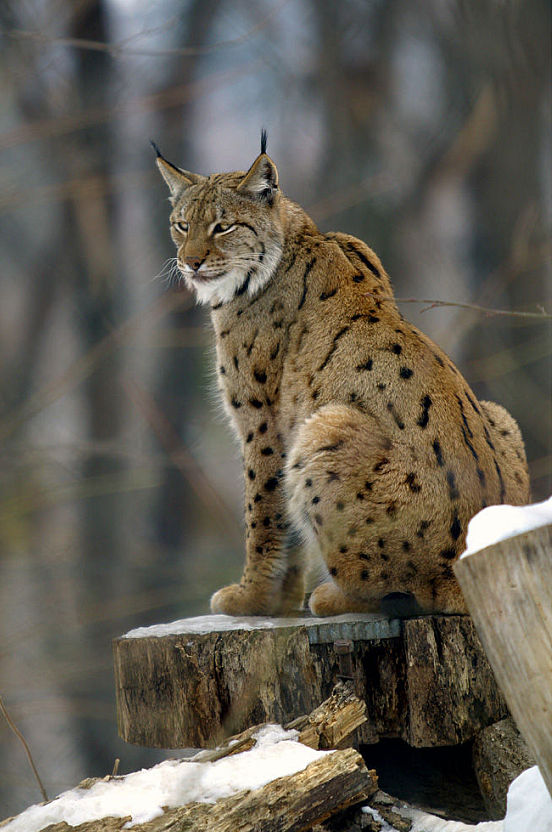 The Eurasian lynx has a relatively short, reddish or brown coat, which tends to be more brightly coloured in animals living at the southern end of its range. In winter, however, this is replaced by a much thicker coat of silky fur that varies from silver-grey to greyish brown. The underparts of the animal, including the neck and chin, are white at all times of the year. The fur is almost always marked with black spots, although the number and pattern of these are highly variable. Some animals do also possess dark brown stripes on the forehead and back. Although spots tend to be more numerous in animals from southern populations, Eurasian lynx with heavily spotted fur may exist close to others with plain fur. 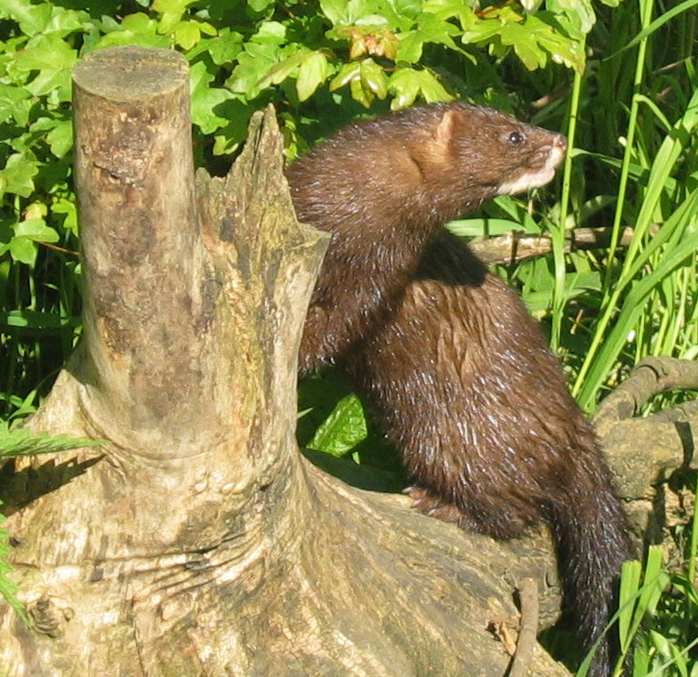 The European mink (Mustela lutreola), also known as the Russian mink and Eurasian mink, is a semiaquatic species of mustelid native to Europe.

It is similar in colour to the American mink, but is slightly smaller and has a less specialized skull. Despite having a similar name, build and behavior, the European mink is not closely related to the American mink, being much closer to the European polecat and Siberian weasel (kolonok). The European mink occurs primarily by forest streams unlikely to freeze in winter.[5] It primarily feeds on voles, frogs, fish, crustaceans and insects.

The European mink is listed by the IUCN as Critically Endangered due to an ongoing reduction in numbers, having been calculated as declining more than 50% over the past three generations and expected to decline at a rate exceeding 80% over the next three generations. European mink numbers began to shrink during the 19th century, with the species rapidly becoming extinct in some parts of Central Europe. During the 20th century, mink numbers declined all throughout their range, the reasons for which having been hypothesized to be due to a combination of factors, including climate change, competition with (as well as diseases spread by) the introduced American mink, habitat destruction, declines in crayfish numbers and hybridization with the European polecat. In Central Europe and Finland, the decline preceded the introduction of the American mink, having likely been due to the destruction of river ecosystems, while in Estonia, the decline seems to coincide with the spread of the American mink.

The Reunion Island ornate day gecko or Manapany day gecko (Phelsuma inexpectata) is a critically endangered diurnal species of gecko. It occurs only on the island of Réunion in the Indian Ocean, typically inhabits trees, and feeds on insects and nectar.

This lizard is one of the smallest day geckos. It can reach a total length of about 12 cm at most. The body colour is dark green. Three red stripes extend from the snout to the neck. From behind the eye, a thick brown stripe and a thin green-white extend to above the front leg. The snout is partly dark blue. The back is covered with reddish-coloured dots, which are greatly reduced in females. The ventral side is off-white. 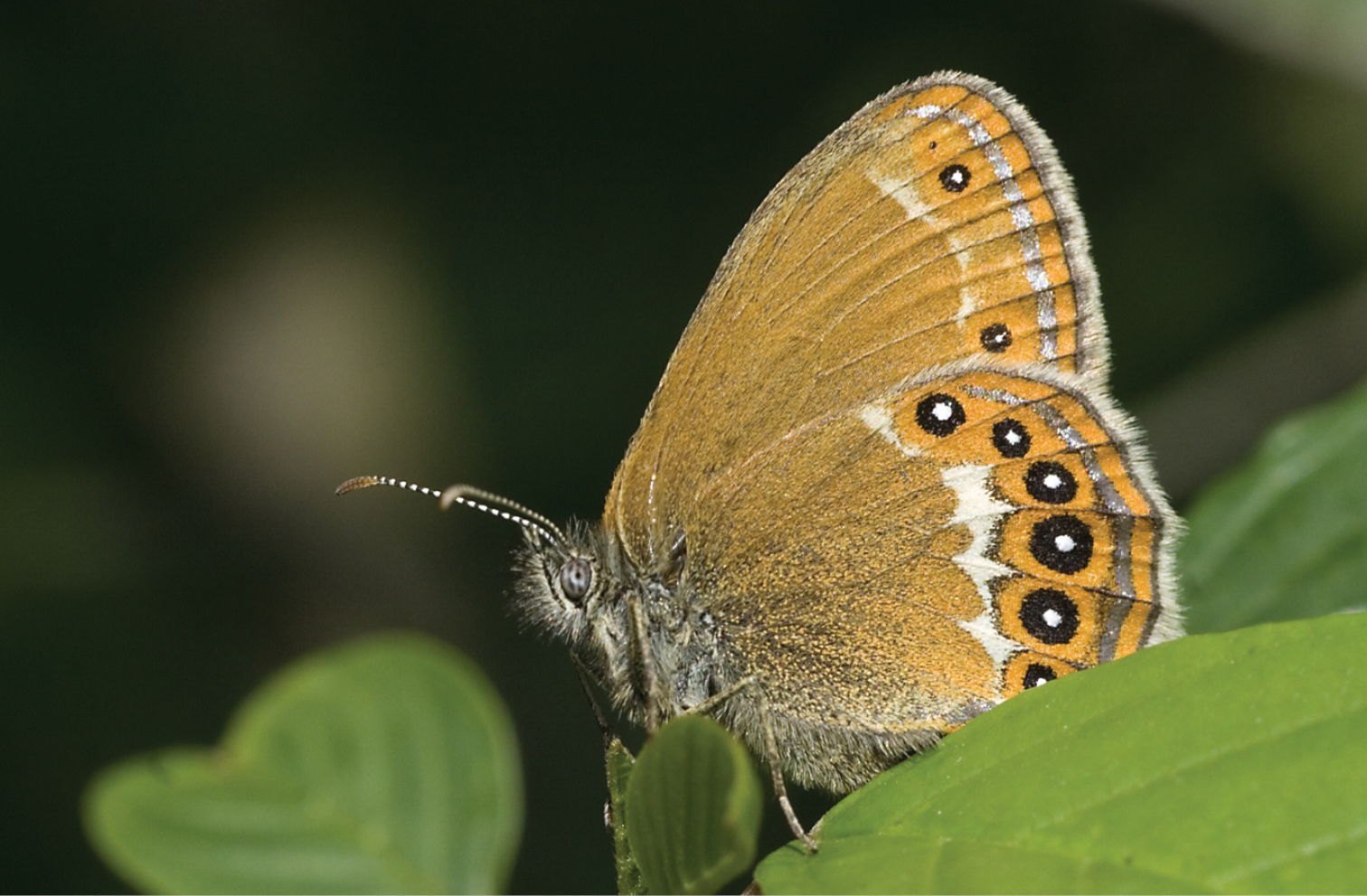 Coenonympha hero, the scarce heath, is a butterfly species belonging to the family Nymphalidae. It can be found in Central Europe, Northern Europe and North Asia. It resembles Coenonympha arcania.

The butterflies fly in one generation from May to July.

The larvae feed on various grasses. 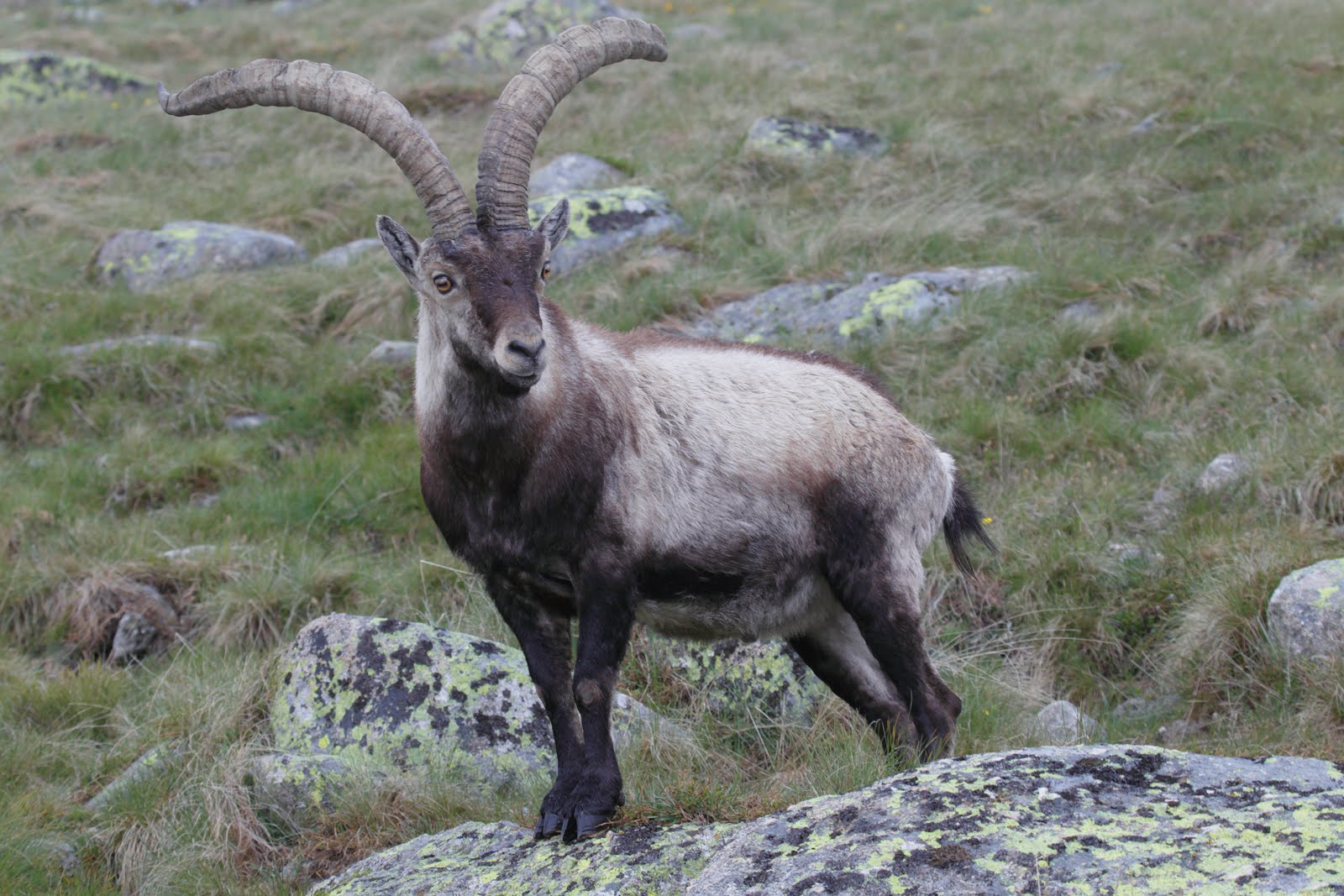 The Iberian ibex (Capra pyrenaica), also known as the Spanish ibex, Spanish wild goat, or Iberian wild goat, is a species of ibex endemic to the Iberian Peninsula. Four subspecies have been described; two are now extinct. The Portuguese subspecies became extinct in 1892, and the Pyrenean subspecies became extinct in 2000. A project to clone to the Pyrenean subspecies resulted in one clone being born alive in July 2003, making it the first taxon to become “un-extinct”, although the clone died a few minutes after birth due to physical defects in its lungs, therefore remaining extinct.

The Iberian ibex is characterized by its large and flexible hooves and short legs. These physical adaptations allow it to run and leap on bare, rocky, rough and steep slopes out of reach of potential predators. The horns of the Iberian ibex curve out and up and then back, inward, and, depending on subspecies, either up again or down. The annual horn growth is influenced principally by age but can also be contributed by environmental factors and the growth made in the previous year. The Iberian ibex also shows sexual dimorphism, with the male being larger in size and weight and also having larger horns than the female. The bones of the female ibex ossify nearly two years before the bones of the male.