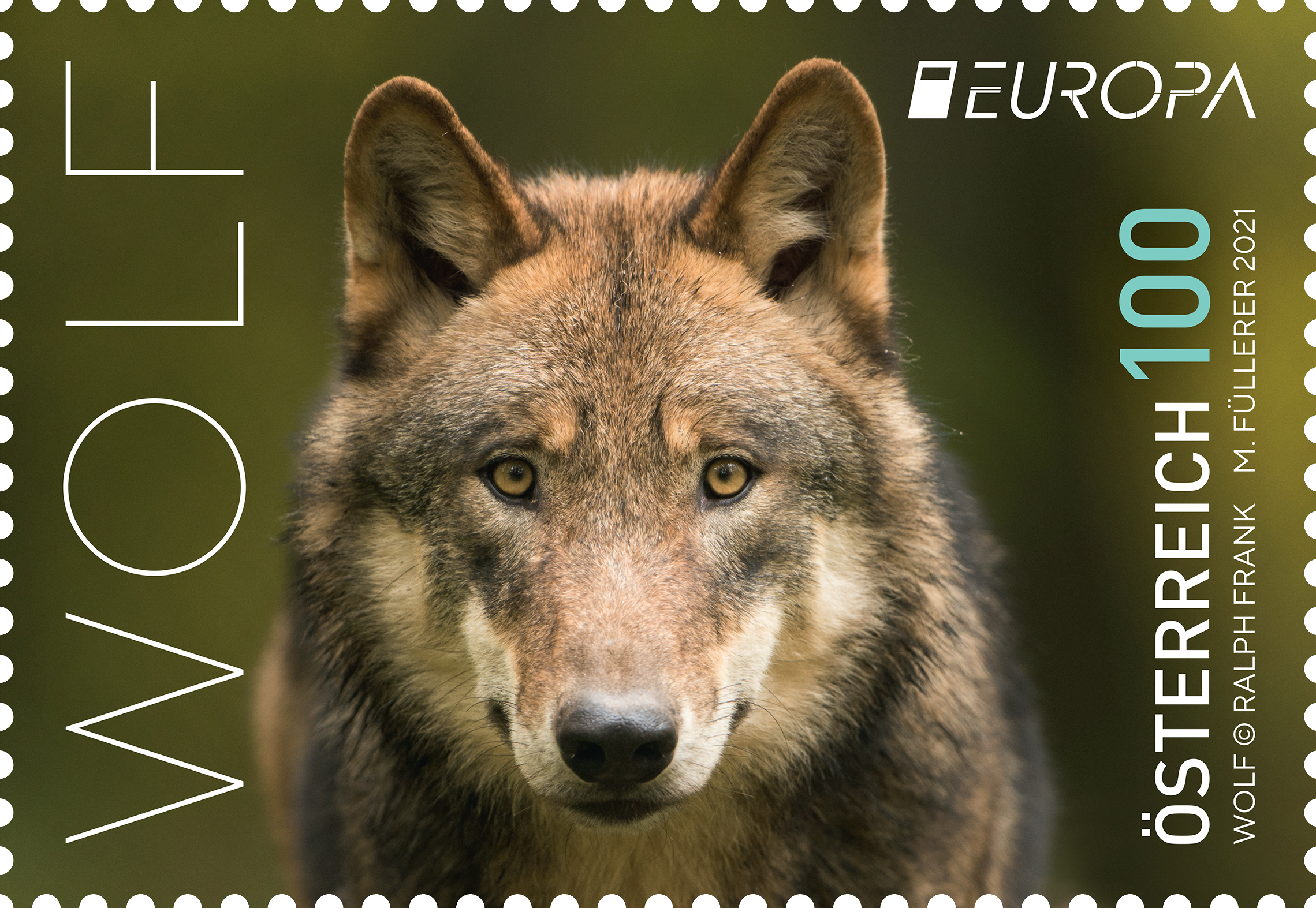 Since 1956, EUROPA trademarks have been used as a symbol of European cooperation and integration. The motif of the Austrian Post on the topic 2021 “Endangered national wild animals” is the wolf.

Since 1882, the wolf has been considered extinct in Austria due to intensive persecution, destruction of its habitat and decline of its prey. From about 2009 individual animals migrated back to our country, in 2016 there were for the first time native offspring with a wolf family in the Lower Austrian Allentsteig. In the meantime, around 30 wolves live in Austria, in addition to Allentsteig, mainly in the Freiwald and in the border area with the Czech Republic.

The wolf is a predator and hunts mainly deer, deer and wild boar. He prefers to choose old, sick and weak animals, his presence has a positive effect on the health of the wild population: the spread of diseases among wild animals is reduced and the ecosystem is stabilized. Wolves are strictly protected in Europe according to EU nature protection directives. Their return to Austria is not without controversy, the WWF emphasizes that the wolf is a natural part of the local biodiversity and advocates good, transnational wolf management in order to enable a smooth coexistence of wolf and human. For example, herd protection dogs and electrified grazing fences are recommended as measures for the protection of grazing animals.

The new EUROPA brand “Wolf” with a face value of 1 euro will be launched 240,000 times in sheets of 50 pieces and will be available from 8 May in all post offices, under post.at/onlineshop as well as at the collector service of Austrian Post AG.

The wolf (Canis lupus), also known as the gray wolf or grey wolf, is a large canine native to Eurasia and North America. More than thirty subspecies of Canis lupus have been recognized, and gray wolves, as colloquially understood, comprise non-domestic/feral subspecies. The wolf is the largest extant member of the family Canidae, males averaging 40 kg (88 lb) and females 37 kg (82 lb). Wolves measure 105–160 cm (41–63 in) in length and 80–85 cm (31–33 in) at shoulder height. The wolf is also distinguished from other Canis species by its less pointed ears and muzzle, as well as a shorter torso and a longer tail. The wolf is nonetheless related closely enough to smaller Canis species, such as the coyote and the golden jackal, to produce fertile hybrids with them. The banded fur of a wolf is usually mottled white, brown, gray, and black, although subspecies in the arctic region may be nearly all white.

Of all members of the genus Canis, the wolf is most specialized for cooperative game hunting as demonstrated by its physical adaptations to tackling large prey, its more social nature, and its highly advanced expressive behavior. It travels in nuclear families consisting of a mated pair accompanied by their offspring. Offspring may leave to form their own packs on the onset of sexual maturity and in response to competition for food within the pack. Wolves are also territorial and fights over territory are among the principal causes of wolf mortality. The wolf is mainly a carnivore and feeds on large wild hooved mammals as well as smaller animals, livestock, carrion, and garbage. Single wolves or mated pairs typically have higher success rates in hunting than do large packs. Pathogens and parasites, notably rabies virus, may infect wolves.

The global wild wolf population was estimated to be 300,000 in 2003 and is considered to be of Least Concern by the International Union for Conservation of Nature (IUCN). Wolves have a long history of interactions with humans, having been despised and hunted in most pastoral communities because of their attacks on livestock, while conversely being respected in some agrarian and hunter-gatherer societies. The wolf is also considered the ancestor of most domestic dog breeds. Although the fear of wolves exists in many human societies, the majority of recorded attacks on people have been attributed to animals suffering from rabies. Wolf attacks on humans are rare because wolves are relatively few, live away from people, and have developed a fear of humans because of their experiences with hunters, ranchers, and shepherds.

The English “wolf” stems from the Old English wulf, which is itself thought to be derived from the Proto-Germanic *wulfaz. The Proto-Indo-European root *wĺ̥kʷos may also be the source of the Latin word for the animal lupus (*lúkʷos). The name “gray wolf” refers to the grayish colour of the species.

The wolf is the largest extant member of the Canidae family, and is further distinguished from coyotes and jackals by a broader snout, shorter ears, a shorter torso and a longer tail. It is slender and powerfully built, with a large, deeply descending rib cage, a sloping back, and a heavily muscled neck. The wolf’s legs are moderately longer than those of other canids, which enables the animal to move swiftly, and to overcome the deep snow that covers most of its geographical range in winter. The ears are relatively small and triangular.

The wolf’s head is large and heavy, with a wide forehead, strong jaws and a long, blunt muzzle. The skull is 230–280 mm (9–11 in) in length and 130–150 mm (5–6 in) in width. The teeth are heavy and large, making them better suited to crushing bone than those of other canids. They are not as specialized as those found in hyenas though. Its molars have a flat chewing surface, but not to the same extent as the coyote, whose diet contains more vegetable matter. Females tend to have narrower muzzles and foreheads, thinner necks, slightly shorter legs, and less massive shoulders than males.

The global wild wolf population in 2003 was estimated at 300,000. Wolf population declines have been arrested since the 1970s. This has fostered recolonization and reintroduction in parts of its former range as a result of legal protection, changes in land use, and rural human population shifts to cities. Competition with humans for livestock and game species, concerns over the danger posed by wolves to people, and habitat fragmentation pose a continued threat to the wolf. Despite these threats, the IUCN classifies the wolf as Least Concern on its Red List due to its relatively widespread range and stable population. The species is listed by the Convention on International Trade in Endangered Species of Wild Fauna and Flora in its Appendix II, indicating that it is not threatened with extinction. However, those wolf populations living in Bhutan, India, Nepal and Pakistan are listed in its Appendix I, indicating that these may become extinct without restrictions on their trade.

Europe, excluding Russia, Belarus and Ukraine, has 17,000 wolves in more than 28 countries. In many countries of the European Union, the wolf is strictly protected under the 1979 Berne Convention on the Conservation of European Wildlife and Natural Habitats (Appendix II) and the 1992 Council Directive 92/43/EEC on the Conservation of Natural Habitats and of Wild Fauna and Flora (Annex II and IV). There is extensive legal protection in many European countries, although there are national exceptions.

Wolves have been persecuted in Europe for centuries, having been exterminated in Great Britain by 1684, in Ireland by 1770, in Central Europe by 1899, in France by the 1930s, and in much of Scandinavia by the early 1970s. They continued to survive in parts of Finland, Eastern Europe and Southern Europe.[152] Since 1980, European wolves have rebounded and expanded into parts of their former range. The decline of the traditional pastoral and rural economies seems to have ended the need to exterminate the wolf in parts of Europe. As of 2016, estimates of wolf numbers include: 4,000 in the Balkans, 3,460–3,849 in the Carpathian Mountains, 1,700–2,240 in the Baltic states, 1,100–2,400 in the Italian peninsula, and around 2,500 in the northwest Iberian peninsula as of 2007.